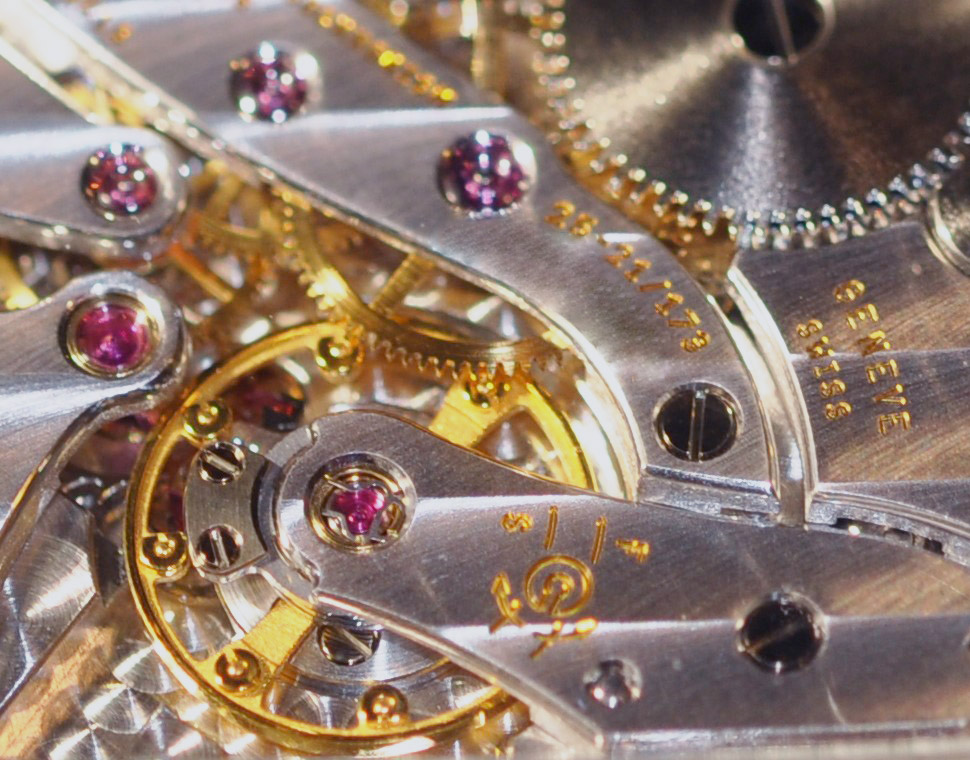 Opportunities For Improvement In The Luxury Watch Industry In 2017 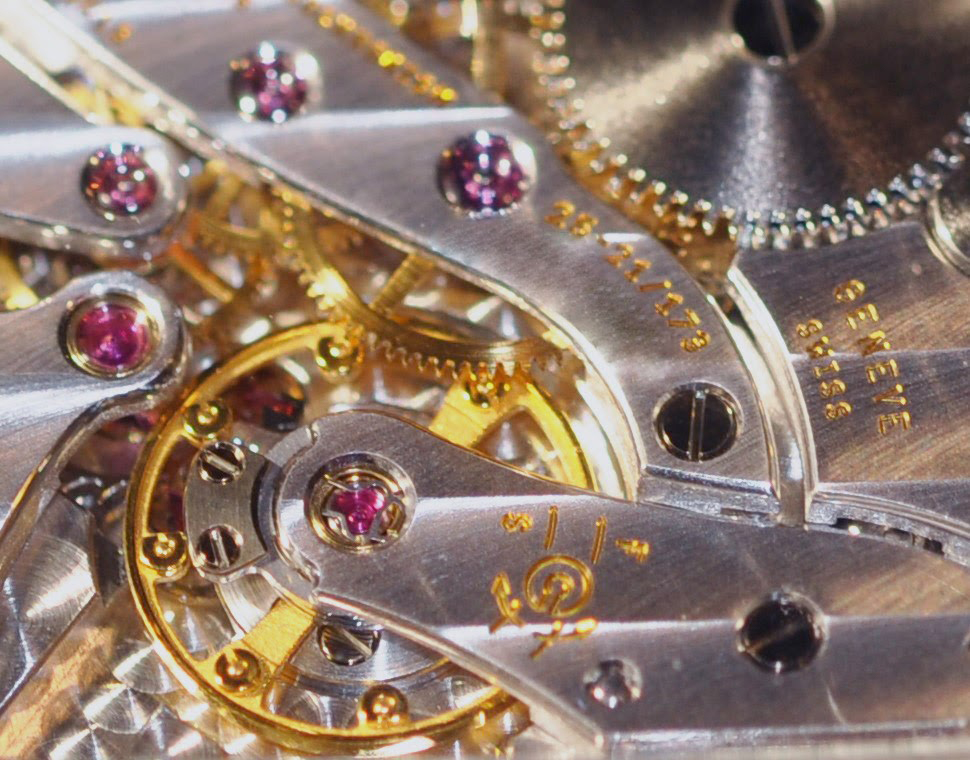 The luxury watch industry is finishing off a difficult year with industry reports continuing to be skeptical. I believe there are many bright spots and opportunities for improvements to re-establish growth in 2017.

In reaching these conclusions, I draw on my academic studies in business as well as my research of the watch industry from a business perspective, looking at finances, marketing, history, and strategic positioning. In this article, I will present my opinions on areas that can be improved within the industry’s control and do my best to support these with information from annual reports, investment, and consulting firm analyst reports, or other research. I will highlight the bright spots of the industry and make a case for changes that can be made at the company level. My goal is that this article will encourage additional dialogue on ways the luxury watch industry can improve despite difficult economic conditions.

Recently, the Federation of the Swiss Watch Industry published their October export statistics:

A recovery had been expected in the fourth quarter, but watch industry exports in fact reported their steepest fall of the year in October. Their value was 16.4% lower against October 2015. 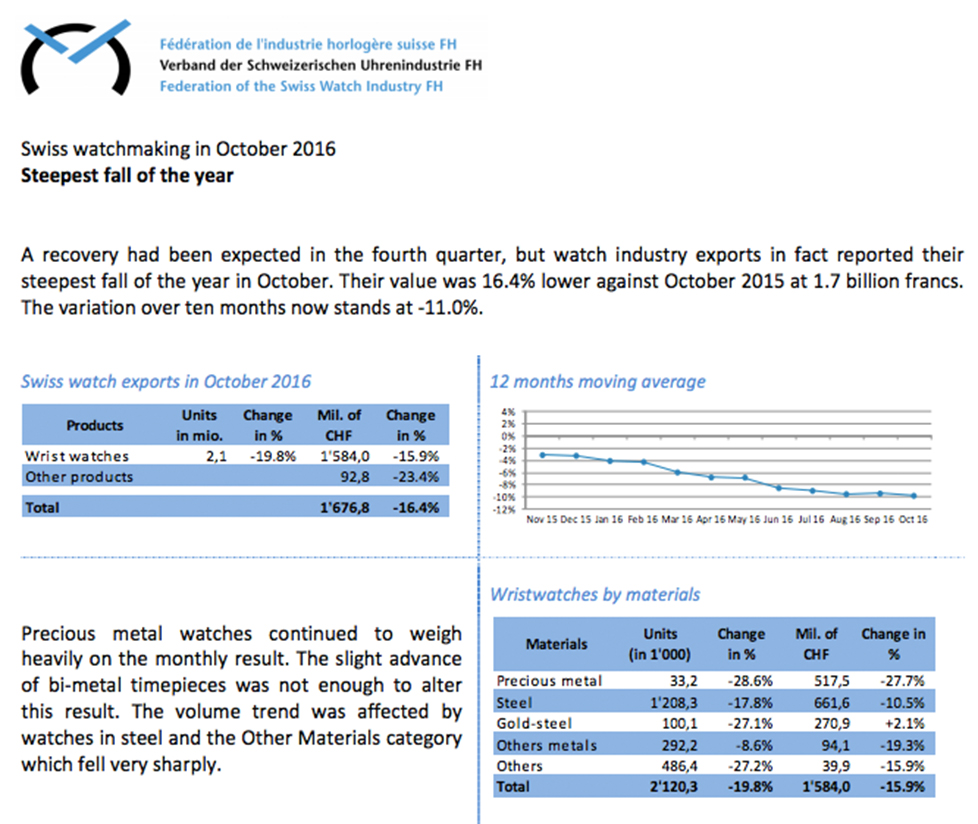 This means the industry reported one of its steepest declines in 2016 during a month both the industry and analysts expected a turnaround. Declining exports (an indicator of sales activity) are due to many complex economic factors including recessions, Brexit, EU uncertainties, global migration, exchange rate changes, elections, and law changes. Yet some things could be changed within the industry that are within companies’ control that could have a positive impact: production scheduling, tweaks to social media marketing uses, and reducing inventories.

A little background: “Swiss Made” was not always the premier watch — but it is now.

You cannot look at an industry that is experiencing a massive decline in profits (after being at all-time highs as recent as 2013) and assume they will always be in a strong position. You must look at the current situation in the context of the industry’s history. 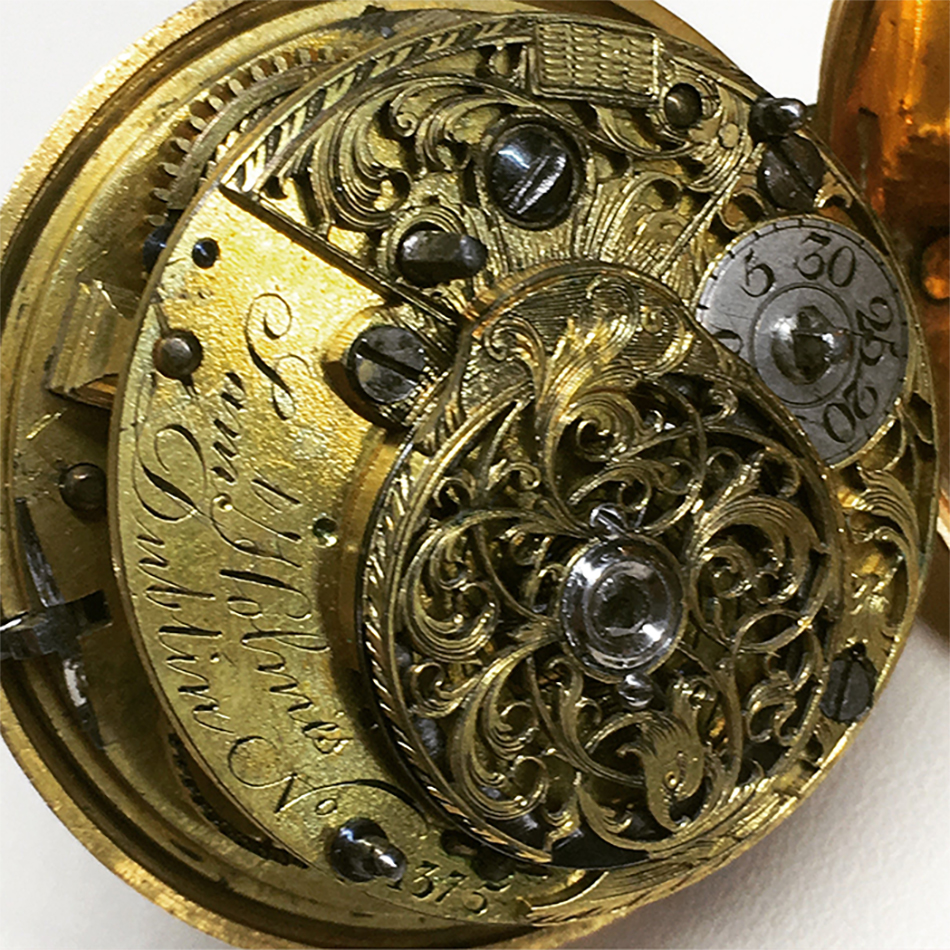 Mid-1700’s pocket watch movement, likely made in England and signed in Ireland

The Swiss have only held the mantle as making the world’s superior watches on and off since the early 1800s (although many historians debate when the exact shift occurred). Prior to this, the following countries held the reputation of producing superior or more  in-vogue mechanical watches that dominated the market (which are my opinion based on the writings of David Landes in A Revolution in Time and other publications. They are open for debate — thank you to Richard Watkins, horology historian and member of the National Association of Watch and Clock Collectors for his discussion and debate of these dates during my research): 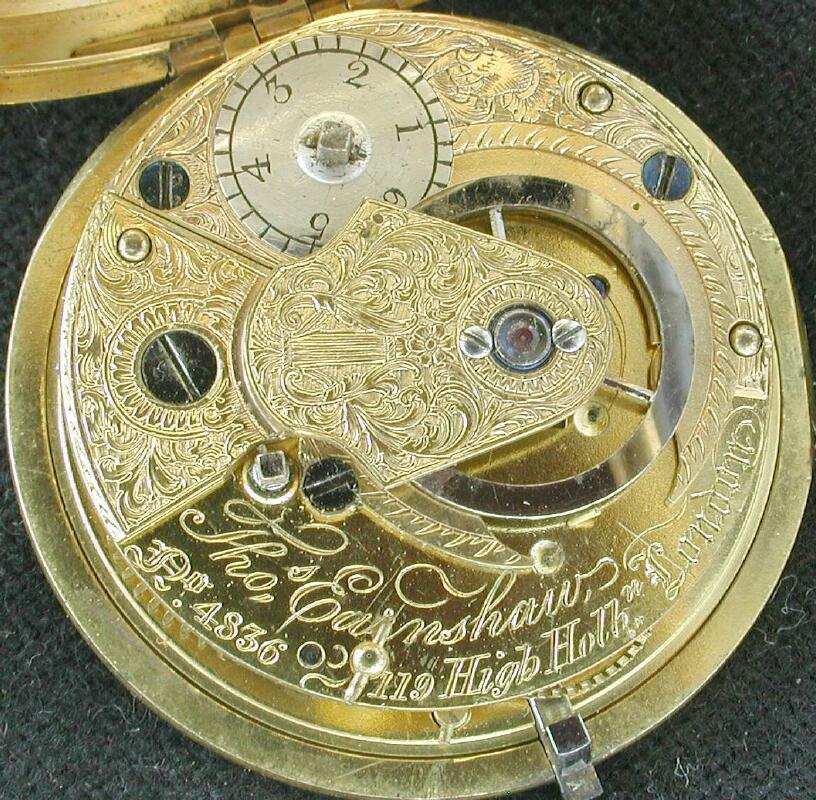 An early English watch by Earnshaw, who helped give the English an advantage in watchmaking technology (from the collection of watch historian and collector Tom McIntyre awco.org)

Despite the fact that it is a very strong industry today, the Swiss mechanical watch industry almost died entirely in the 1980s due to obsolescence from the invention of the quartz watch. This is highlighted by two parallel quotes noted by watch industry researcher and Harvard Business School Professor Ryan Raffaelli in his research on mechanical watch technology re-emergence:

1983: “Now we bid farewell to the [Swiss] master craftsmen who have brought us these wonders of the mechanical arts. Their time has come and probably gone.” (David Landes in Revolution in Time) 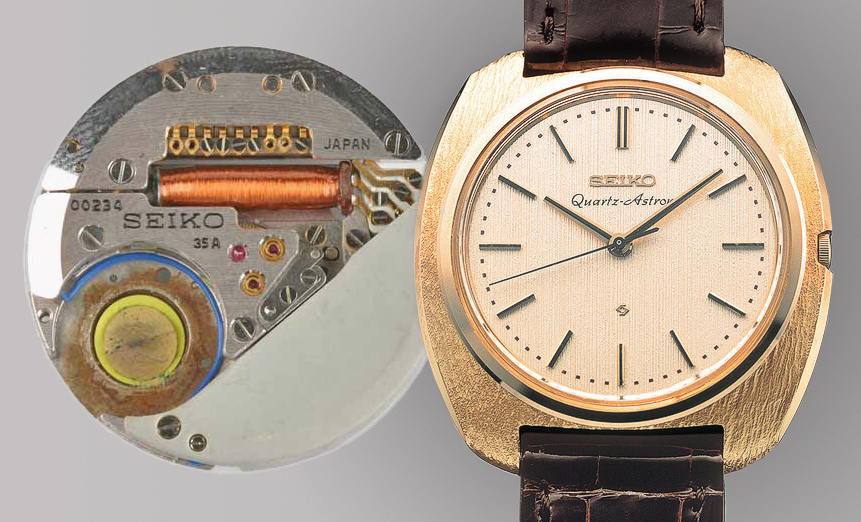 2008: “The watch industry is today, as it was yesterday, one of the brightest stars in the Swiss economic firmament. Better still, during the last five or six years, it has taken the leading position amongst the country’s most successful industries.” (Federation of the Swiss Watch Industry 2008 Annual Report) 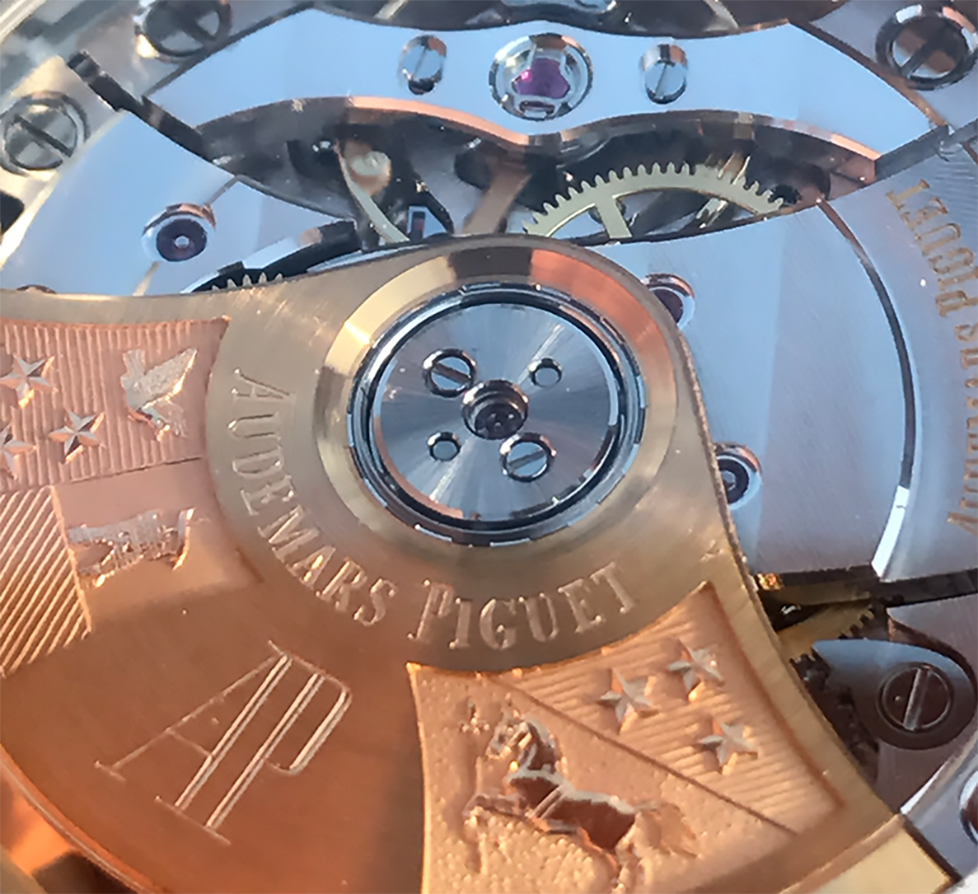 Despite being technologically obsolete, mechanical watches are now most desired by luxury watch buyers (Author’s photo)

The Current Situation of the Two Biggest Watch Producers

On November 22, 2016 the Federation of the Swiss Watch Industry reported a -15.9% slump in wrist watch exports, with a total -11% in exports in 2016 (compared to this point in 2015). This 2015 – 2016 decline in exports (and sales) has impacted the industry substantially. By looking at the industry from a financial perspective, it shows an industry that must make changes in the face of a mounting drop in exports.

When analyzing a company and how they are performing, it is important to look at (least) 3 things:

In this analysis, I will look at a few key metrics and explain how they are relevant to improving the industry in 2017.

Richemont Group and Swatch Group are both publicly traded companies whose financial reports to shareholders are available online. Swatch owns about 18% of the watch market (the largest single producer), followed by Richemont at 15%, and Rolex at 11% (see table below). I primarily focus on Swatch and Richemont because of their approximate 95% and 50% (respectively) revenue from watch sales and their position as #1 and #2 manufacturers.  Swatch Group  had over 8.4 Billion CHF in revenues from watches in 2015 and Richemont Group had 3.50 Billion CHF (converted from euros).

Market values of both companies have been cut significantly over the last 3 years. Below are 3-year stock prices for Swatch Group and Richemont Group (as of 06 December 2016). 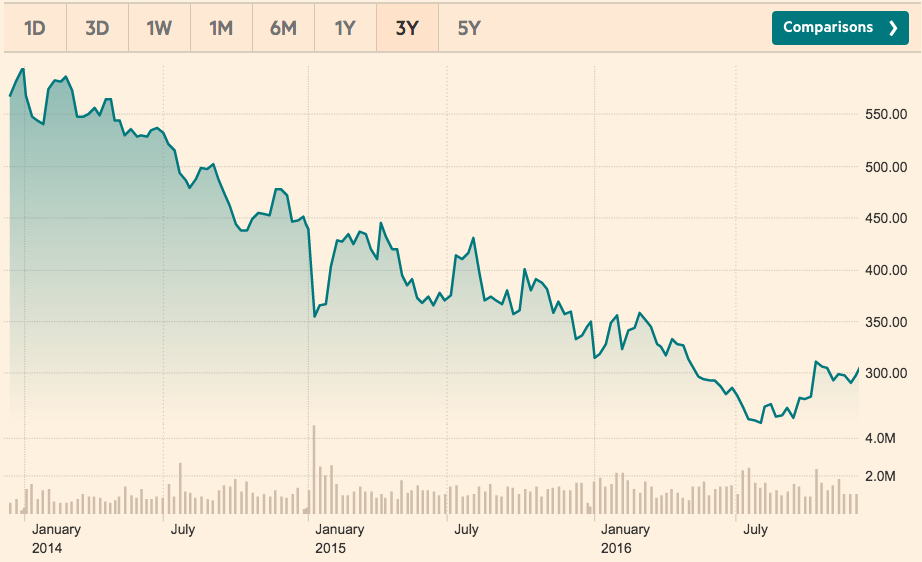 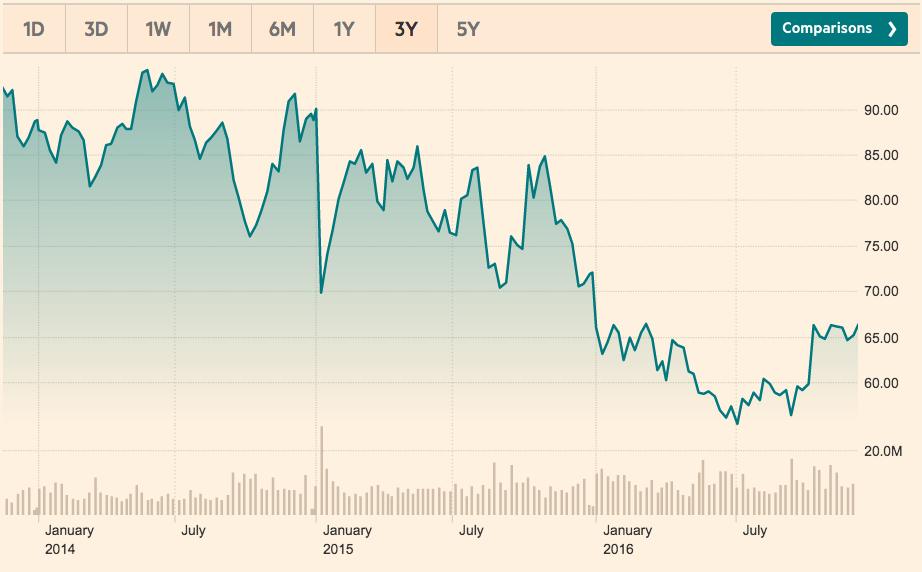 The purpose of showing these charts is to demonstrate that the watch industry (and the two largest producers) have seen a turn of fortunes in the last 3 years. This is not an article about stock valuation and whether or not the stock of each is currently over or under-valued. In fact, both have seen recent positive price corrections with stocks going up 5-10% this week alone (with the DOW almost reaching 20,000) and some analysts upgrading their forecasts. This is not the focus of this article, nor would talking about company valuations provide anything other than investment recommendations, which qualified analysts already provide. Rather, the focus is on what the companies can do to make improvements at the company level to weather the current economy, future fluctuations, and fortify practices for the next generation of luxury watch buyers and enthusiasts.

Swatch Group & Richemont Group semi-annual reports released this year show that operating results have fallen about 50% due to high fixed costs and decreasing sales, while dealing with large inventories. In the most recent annual report, Swatch’s cash conversion cycle (a business metric to measure how fast a company can turn raw materials into cash) has grown substantially from initial purchase of materials to getting paid for a sold watch.