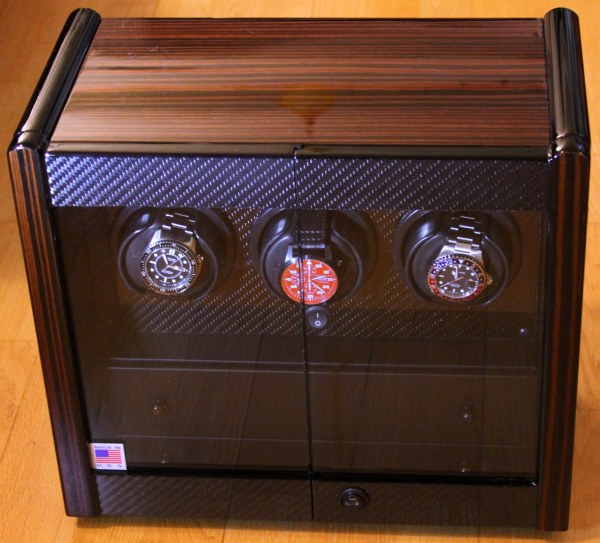 “Fancy.” Was pretty much the word that came to mind after finally unwrapping the Avanti 3 from US-based watch winder maker Orbita. This isn’t the first package from Orbita that I have had to wage sweet war with to open, so I know this is a trend. I have to say that if Orbita ever decided to get out of the watch winder business they would find immediate use in the “package stuff up so that no matter what, nothing will damage it” business. If the attention to detail they use when packaging their products up for delivery speaks anything about the attention to detail in their products – these products should seemingly last forever.

About 30 minutes after climbing the unpackaging mountain you reach the summit and the Avanti 3 shows itself accompanied by something that is best described as that “new watch winder smell.” I have reviewed a few Orbita watch winders (such as the Sparta 1 Mini, Tesla, and Futura), and am consistently impressed by most of their watch winders. The Avanti 3 is more than a watch winder. Here you are getting to furniture-like items (not to mention some actual furniture) that Orbita offers. The Avanti 3 is part of a family of Avanti watch winder cabinets that come in a range of sizes.

The unit is made of beautiful exotic Macassar wood with carbon fiber on the front panels and on the inside. Orbita routinely chooses very attractive woods for its products, and the finishing is very impressive. The integration with the carbon fiber feels natural as opposed to contrived as you don’t often find the two materials side-by-side like this. The basic design of the Avanti is highly scalable. While the Avanti 3 is the most basic unit, Orbita offers models up to the Avanti 48. The difference is the size, and the amount of watch winders in the unit. 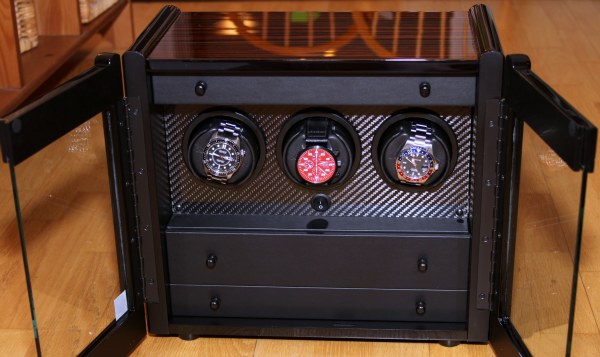 Design-wise the Avanti really holds it own in a room. Orbita’s concept behind the look of it was to fit in most any room, but look good without having to blend into the background. It goes without saying that the dark wood and carbon fiber is masculine in style. One thing I find interesting about the design is that it feels appropriate as a housing for modest timepieces up to the most high-end ones available. The front of the Avanti opens up with two lockable glass doors. Orbita supplies two keys for the lock. The system works well, but the doors don’t close with the tautness of a vault. They are secure though. While the front doors lock, its use as a security mechanism is of course limited by the Avanti itself. While the locked glass doors will deter a “casual thief,” anyone can just pick up the Avanti 3 and haul it away. The cabinet weights 22 pounds, and it isn’t even plugged in. Dimensionally the Avanti 3 is 13.5 inches tall, 15.25 inches wide, and 8.25 inches deep. 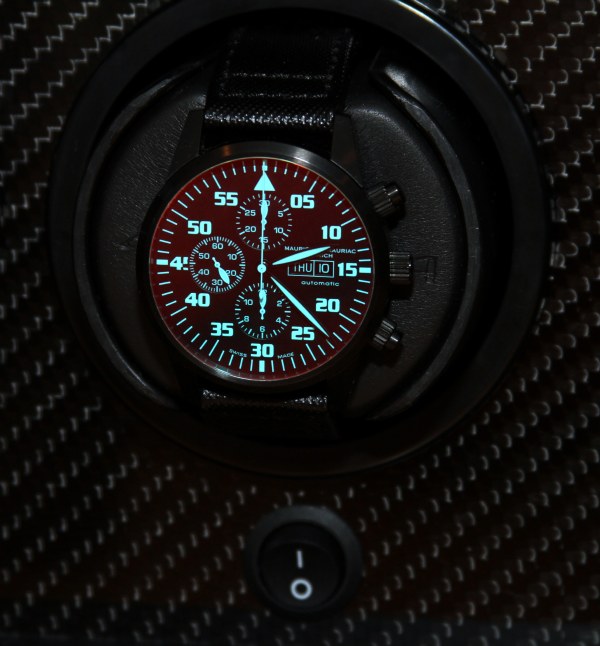 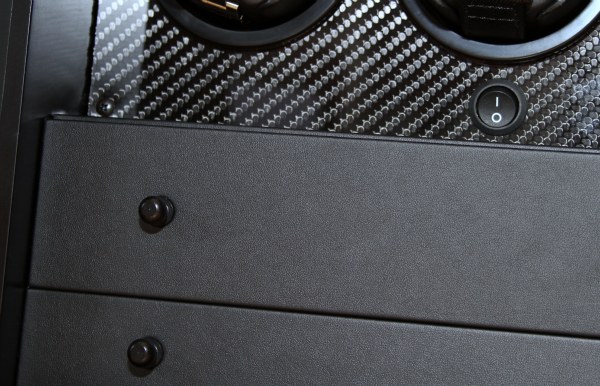 Orbita prefers to use batteries for the system rather than a wall plug. I personally would have preferred both options, but Orbita makes a compelling case for the batteries. Like most Orbita battery powered units, the Avanit 3 runs off special lithium ion cells. Orbita even white labels them and sells them to you when you need replacement. According to Orbita the four batteries in the Avanti 3 are good for 5 years of power. While the batteries aren’t drug store cheap, they aren’t a big expense to get every five years. Problem is that they aren’t drug store available either. While there is probably a store in your area that has compatible batteries, when they do run out you’ll need to specially order them from Orbita or hunt around for them while your watches aren’t being wound. I wonder if you can run the winder off of standard D cells? I will have to ask Orbita about that. The batteries are placed in the rear of the unit. While the back of the Avanti 3 isn’t unattractive, it isn’t meant to be displayed – so you’ll need to put the Avanti 3 against a wall. I would just get two of them and place them back-to-back! 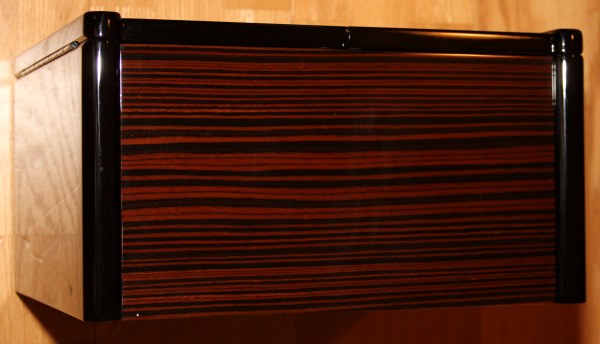 The Avanti watch winder family isn’t new, but Orbita recently upgraded them with their patented ROTORWIND watch winders. I have praised this system before and my love of it stands. In addition to only sipping power and being virtually silent, the ROTORWIND system is very efficient and safe on your watch. There is no programming necessary either as the motion swings in both directions. The system uses a slow stepping motor to spin the watch into an apex position, and then releases it. A weight on the back of the winder unit similar to that in an automatic movement falls due to gravity and oscillates back and forth. The Avanti 3 is programmed to “spin” once each 10 minutes. According to Orbita this provides enough power to keep a watch running, but wont wind it past the point it was when you placed it in the winder. This is good for ensuring optimal accuracy. The maintenance free and efficient ROTORWIND system make it one of the best types of watch winding mechanisms out there. 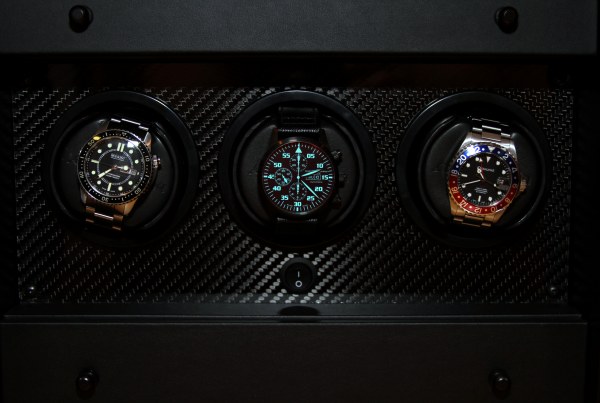 Inside the cabinet are three watch winders (with a single on/off switch) and a few slide-out drawers. The Avanti 6 on the other hand does away with the draws to make room for 6 watch winders. The drawers can be used to hold other watches (that lay flat) or anything else that fits. There are three drawers – one above the winders and two below. The fit and finish on the inside is well-done and the carbon fiber looks striking here. According to Orbita, if you buy an Avanti 3 and later want it to have more winders, you can send it back to them and they will install another row of winders for you to make it an Avanti 6.

Made in America, the Avanti 3 three is a well performing watch winder and attractive addition to a room where men can celebrate their hobbies. As watch collecting usually involves growing your collection, so does your need for winders. At a point you prefer units that wind multiple watches, and the better looking they are the more you want them. Price for the Avanti 3 is $2,995. That goes up to $4,995 for the Avanti 6, and way up to $54,000 for the Avanti 48.

Thanks to Orbita for the review unit. Opinions are 100& independent.
Advertising Message