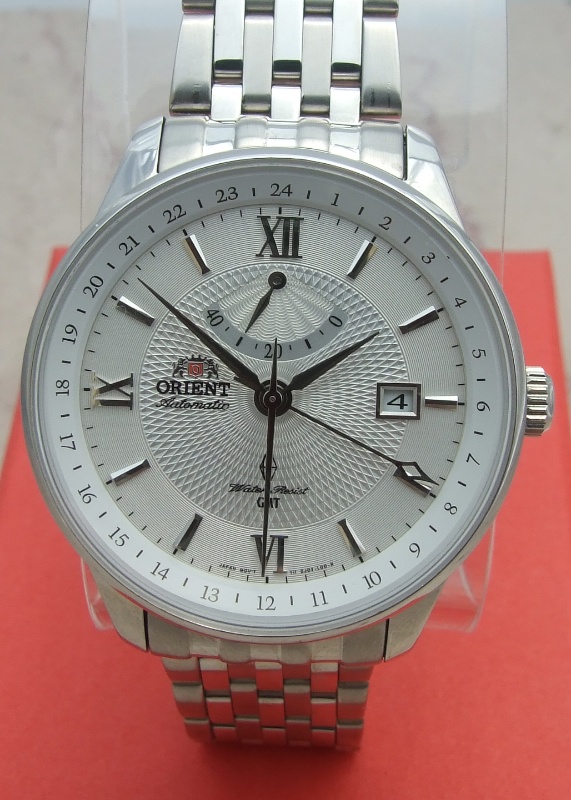 This is the Orient DJ02003W, an automatic with GMT, date and power reserve complications. Classic and a bit conservative with silver dial and Roman numerals, Orient is as always, excellent value for the money. This represents a nicely made piece with one of their most modern, always in-house made movements to date.

Orient’s signature complication is the power reserve indicator, here seen at twelve o’clock. They are not common, making it a nice differentiator for the brand. It indicates in hours, the amount of power in the mainspring. Here you can see about 30 hours of running remains. The movement should have a maximum power reserve of about 42 hours. With its bidirectional winding, about an hour per day of active wear (walking and such) will keep it topped off, but it’s a nice bit of interaction with the mechanics. I quite enjoy watching it climb while I handwind, reminiscent of feeding an electronic Tamigotchi pet.

Orient watches, as a brand, is still making itself known in the US and Europe. Long established in Asia, it’s one of the few companies that makes its own movements and, similar to Seiko and Citizen, does so affordably. This model is from the upper end of their range, with sapphire crystal and decorated movement. 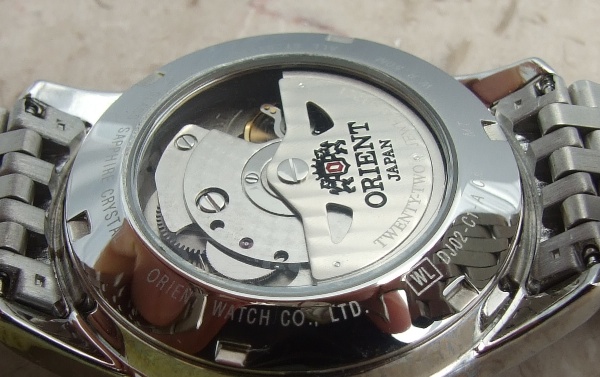 I’ve owned several Orients, and this is the nicest finish I’ve seen on their movements. 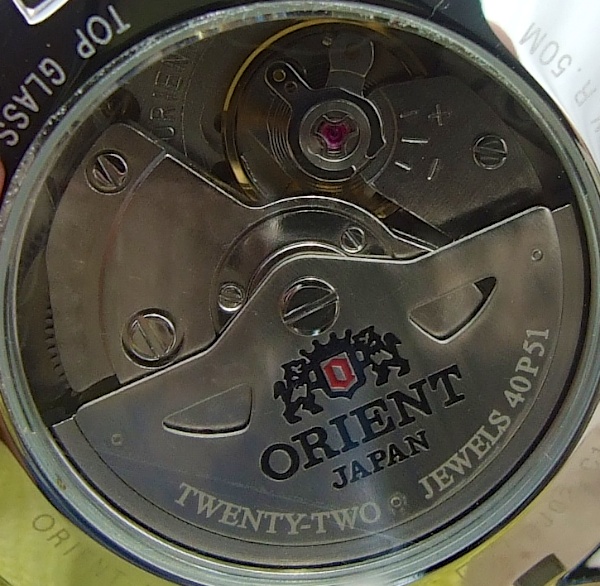 Some specifications are in order. The movement is the Orient 40P51, beating at 21,600vph and a power reserve of about 42 hours. Hackable, handwinding, quick-set date, independent GMT hand. The case is stainless steel, 40.2mm by 12.3mm thick, with 20mm lugs and a 5.85mm crown. Bracelet is 3.3mm thick, butterfly deployant, solid throughout and non-tapering. Total weight is 135g with all links.

There aren’t a lot of affordable GMT movements out there – the ETA 2893, the Shanghai B, modified ETA 2836, and no doubt a few others. Because of this, there aren’t a lot of affordable, mechanical, GMT watches either. It’s often marketed for those who do business across timezones, are frequent fliers or need to meet with others in distant timezones. The original, by Rolex, was for the first jet pilots and is still useful, as things like weather forecasts and instrument flight plans are filed in UTC time.

The GMT is the diamond-shaped hand, settable independently from the hour hand in one-hour increments. Pull the crown out one stop and rotate. In one direction the date changes and in the other the GMT hand moves. 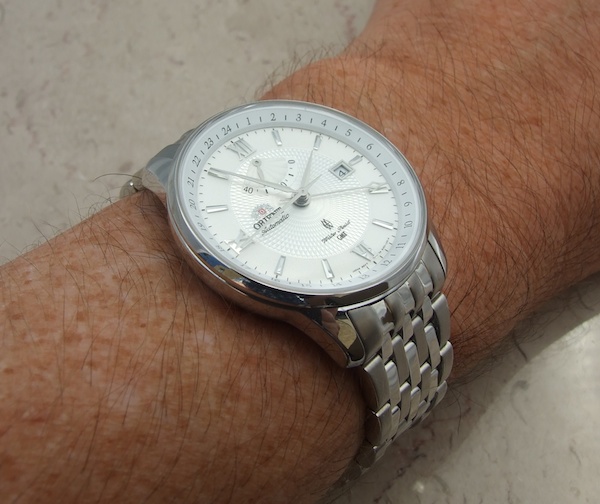 At 40mm this one is just about perfect for a daily wearer. The silver-on-white is dressy without flash, and the 12mm thickness is very dress shirt friendly. It’s also available with black dial or two-tone as well. It’s 50m water resistant but not a watch I’d swim with. No worries in the rain and such, but the non-screwdown crown isn’t designed for water. 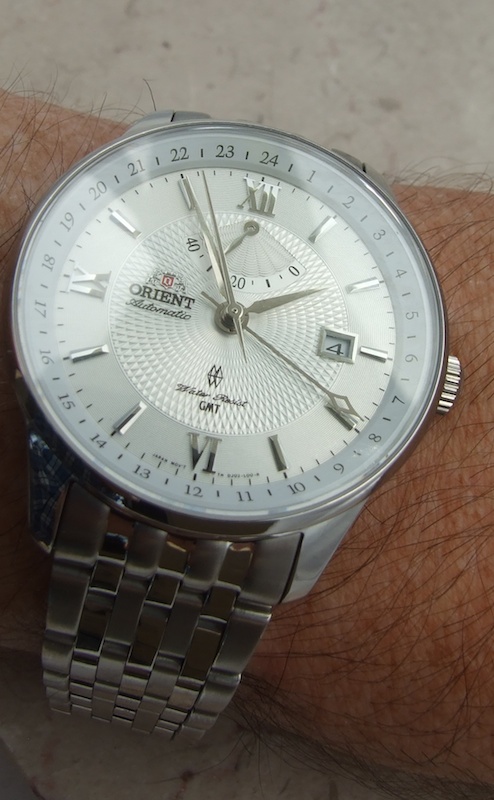 On the wrist, its dial is detailed and a pleasure to look at. The four silver hands take a bit to acclimate to, but their shapes and sizes differ enough to keep legibility good. The polished hands reflect even faint light, so despite the non-lumed design it’s readable as long as there’s any light around.

At $840 list with discounts often possible this is a good price for a GMT with sapphire and power reserve. A well-made watch with a classic design that will serve you well for years without breaking the bank.