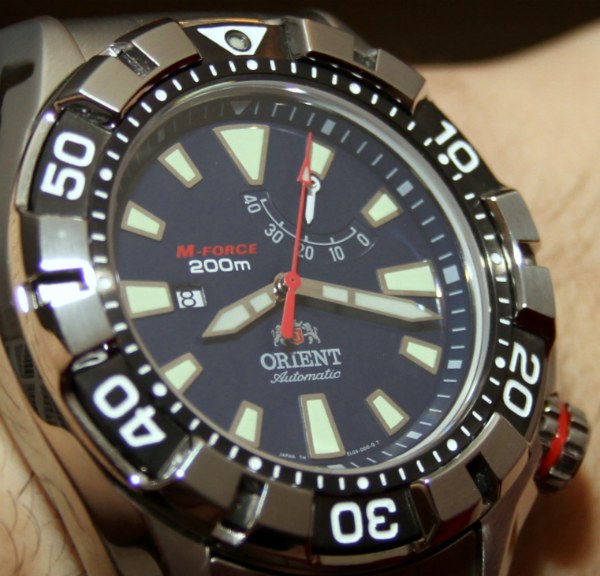 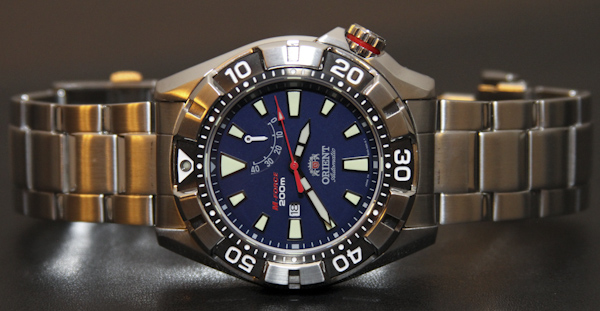 One of my favorite divers in my collection is an Orient CFD0C001B Saturation Diver. I reviewed it here. While it has quirks, the big beefy diver has a great look with a useful dial and a fantastically adjustable bracelet. I still love wearing it today. As far as I know it is one of Orient’s most expensive watches and certainly at the top of their diver collection. This M-Force Diver model is more modern, but considered a mid-range model between the more pricey Saturation Diver and Orient’s lower-end offerings. It is further accompanied by a similar watch called the Orient Revolver diver.

The M-Force collection of watches come with blue, black, or orange dial colors. This blue model I am reviewing is the ref: SEL03001D. The steel case is 46mm wide and it wears extremely comfortably. I have to also add that Orient watches by and large are very comfortable on the wrist (at least mine). The case design of the M-Force is interesting a looks like a slight interpretation of its older sibling. Orient’s designers went a bit wild with the bezel design, but it feels contemporary. Turning it is a bit amusing. While it does move smoothly, the clicks have a rather distinct sound to them. Orient positioned the crown at 4 o’clock, and placed a red O-ring on it for a splash of decorative color. 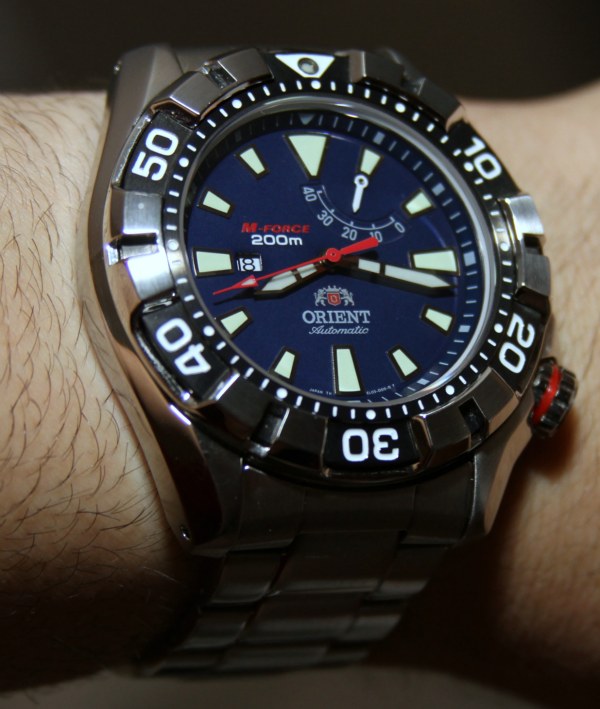 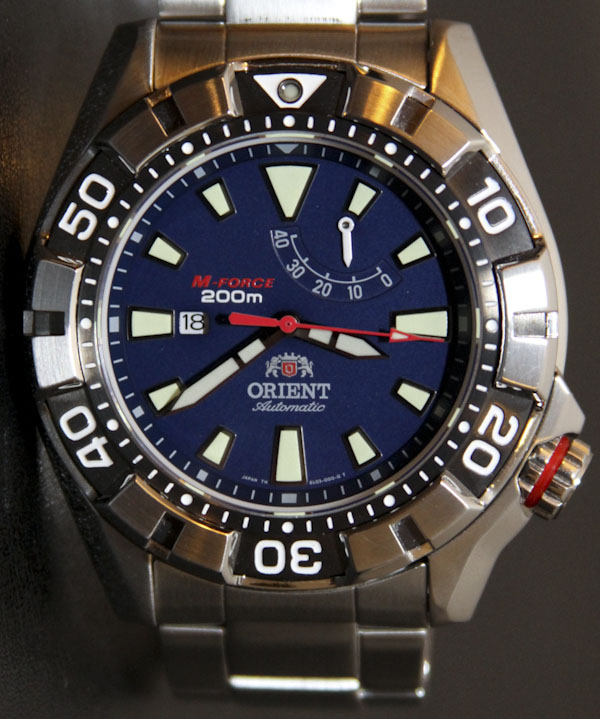 You’ll notice that the case is a mixture of brushed and polished elements. This is carried over to the bracelet which has thin strips of horizontal polished striped amid the mostly brushed surfaces. While the metal bracelet is technically simple, it is wide and relatively thin with a comfortable feel. Sometimes simple is best. Lacking on the M-Force model compared to its big brother is the Saturation Diver’s famous ratcheting deployment clasp (that I love). This feature gave it lots of micro-adjustability on the fly. The M-Force however has a more traditional triple-locking fold-over clasp. This high level of reliability gives it a folding latch as well as a push-button release. What I love about the Japanese is that they can make parts which are produced inexpensively work much better that expensive parts produced elsewhere.

The watch case is water resistant to 200 meters – compared to 300 meters of its big brother. That should be enough for most people. You see the term “Air Diver” on the back as opposed to the saturation diver status of the other piece which is more than twice the cost. Over the dial is a sapphire crystal. It would be nice to see some AR coating though. 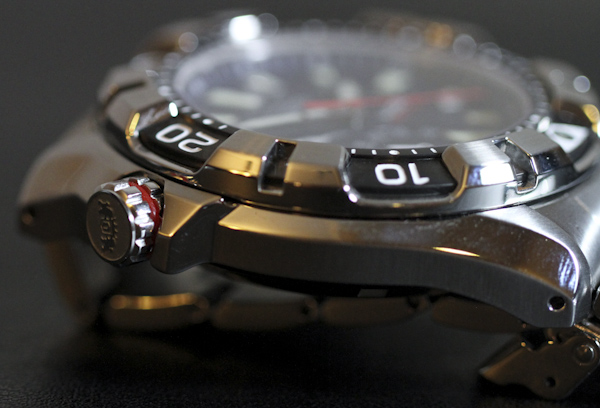 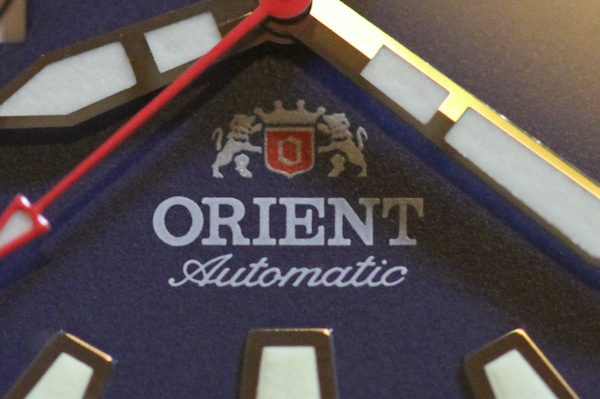 Inside the M-Force is the Orient designed and manufactured caliber 40N5A automatic movement. Yes, to remind you, Orient does make their own movements in Japan. The movement is essentially the same as that in the Saturation diver. Same features and layout – which includes the time, date, and power reserve indicator. Being a newer watch the M-Force has an upgraded movement that features automatic and hand-winding. Previous generation Orient automatic movements did not had the option to hand-wind the movement. Now they do. Plus, the movement features a hack seconds feature which I believe was absent in the previous ones.

What I have always liked about the dial layout is that the power reserve indicator does not significantly detract from legibility. While not a testament to innovative design, the M-Force’s dial is functional and visually stimulating. You have large applied hour indicators, and both they and the hands are well-coated in luminant. My only suggestion to Orient would have been to make the hour and minute hand a bit more distinctive from one another. The mixture of colors is done well and I like the prominent Orient logo. 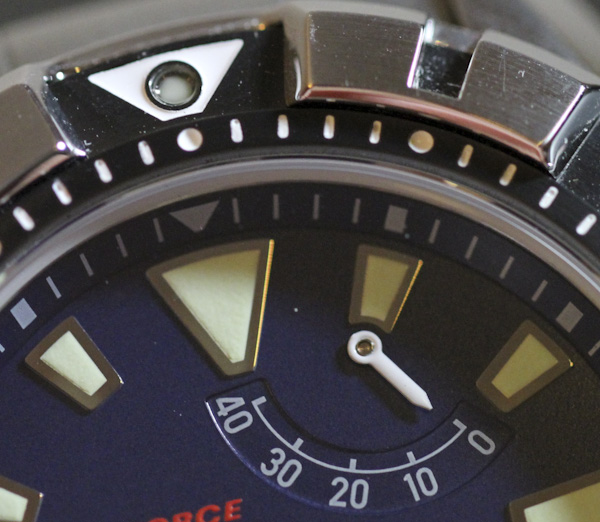 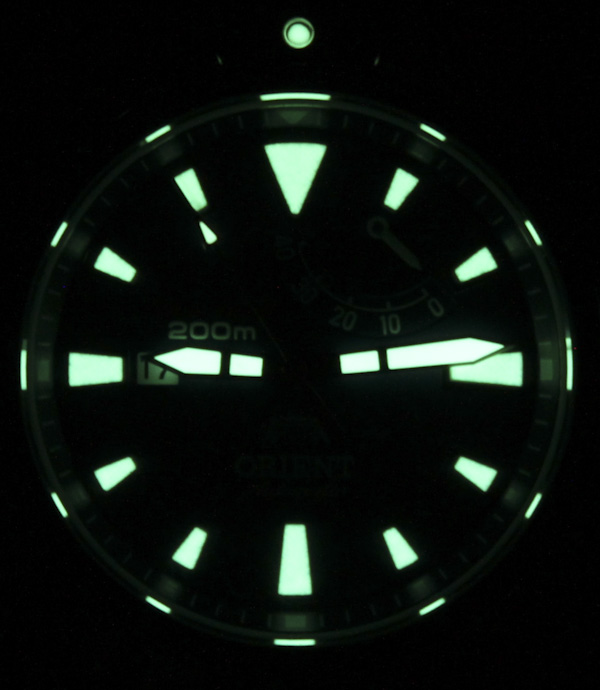 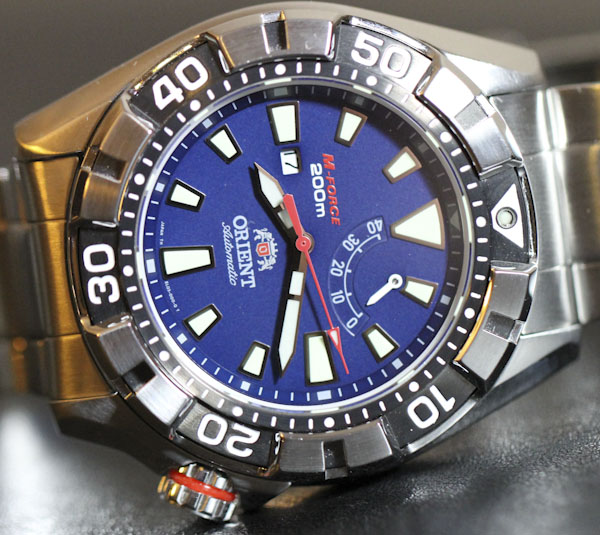 For the money you get a lot with a watch like the M-Force. Orient is a brand that prides itself on value, so you really never end up feeling as though you didn’t get enough for what you paid. The pieces might not be as solid feeling as higher-end Swiss pieces, but you are paying a fraction of the price. The M-Force models are fun and sport looking with a functional edge. They are comfortable on the wrist and feel tough enough to be beaten around. While similar in demeanor to many Seiko dive watches, Orient pieces feel a bit more classically inspired, versus Seiko which often features fun and futuristic concepts. Price before any available discounts online here at Orient Watches USA is $720.

BONUS: For a limited time aBlogtoRead.com readers get 50% off purchases at Orient Watch USA by using the discount code “ablogtoread50” at checkout.

Thanks to Orient for the review unit. Opinions are 100% independent.
Advertising Message