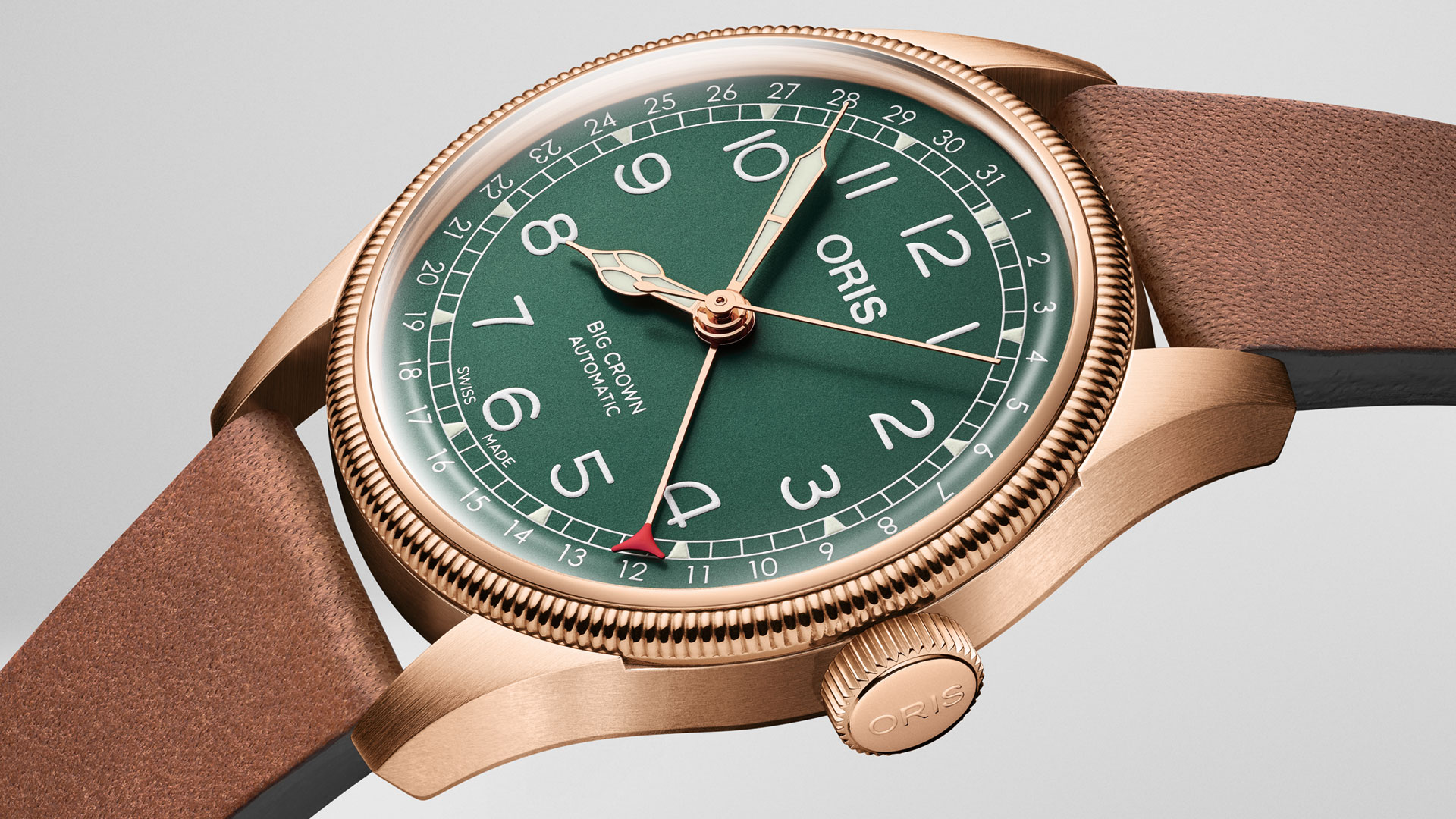 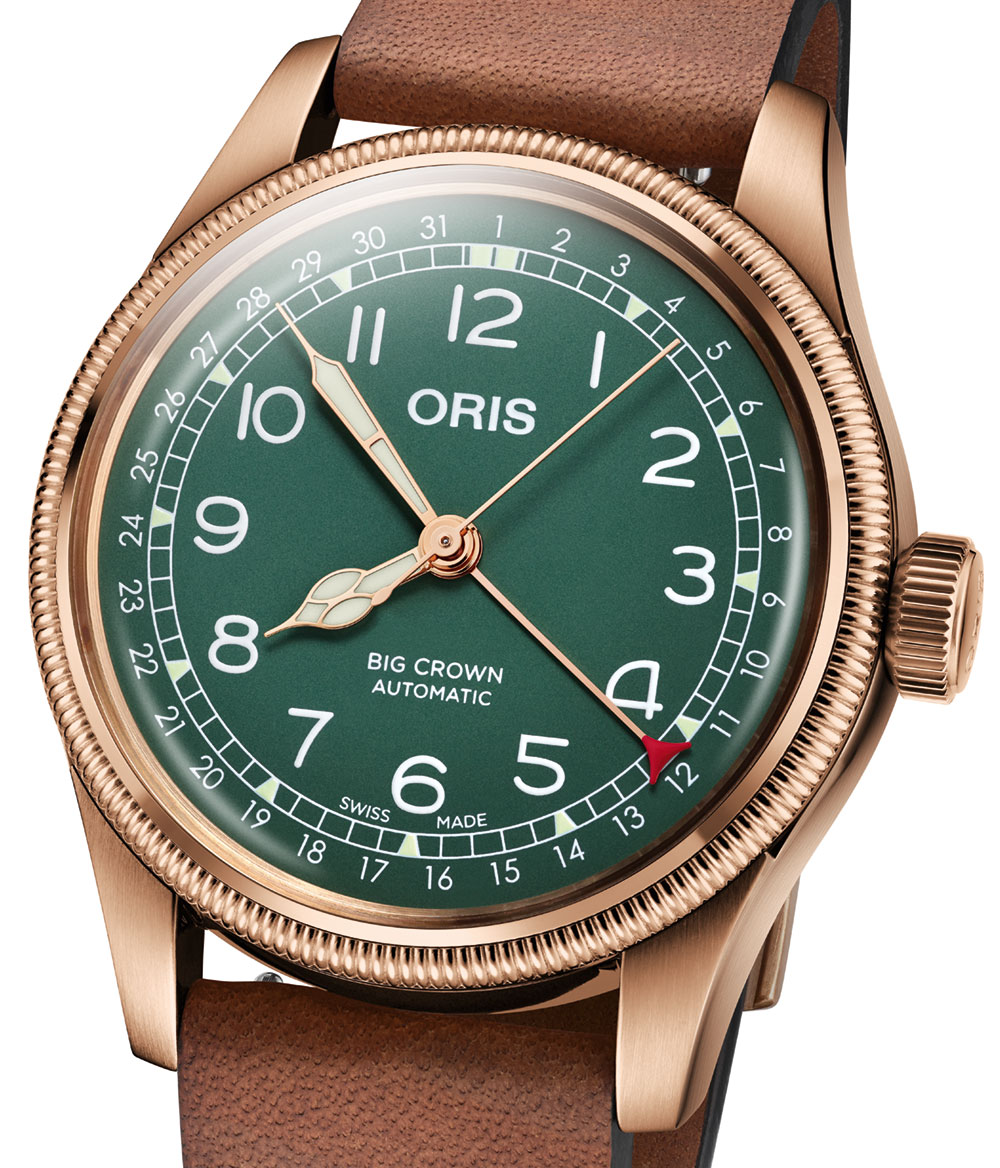 The pointer date complication probably isn’t the first thing that comes to mind when one considers Swiss independent Oris, but it is arguably one of the brand’s most important collections – which is why Oris is celebrating the 80th anniversary of its first Pointer Date watch introduced in 1938 with a very special Big Crown bronze edition. Being a significant anniversary year also explains why we’ve seen so many different Pointer Date variants already this year, including bronze and stainless steel editions commemorating various partnerships, like the recent gilt-dial version for the Movember foundation. 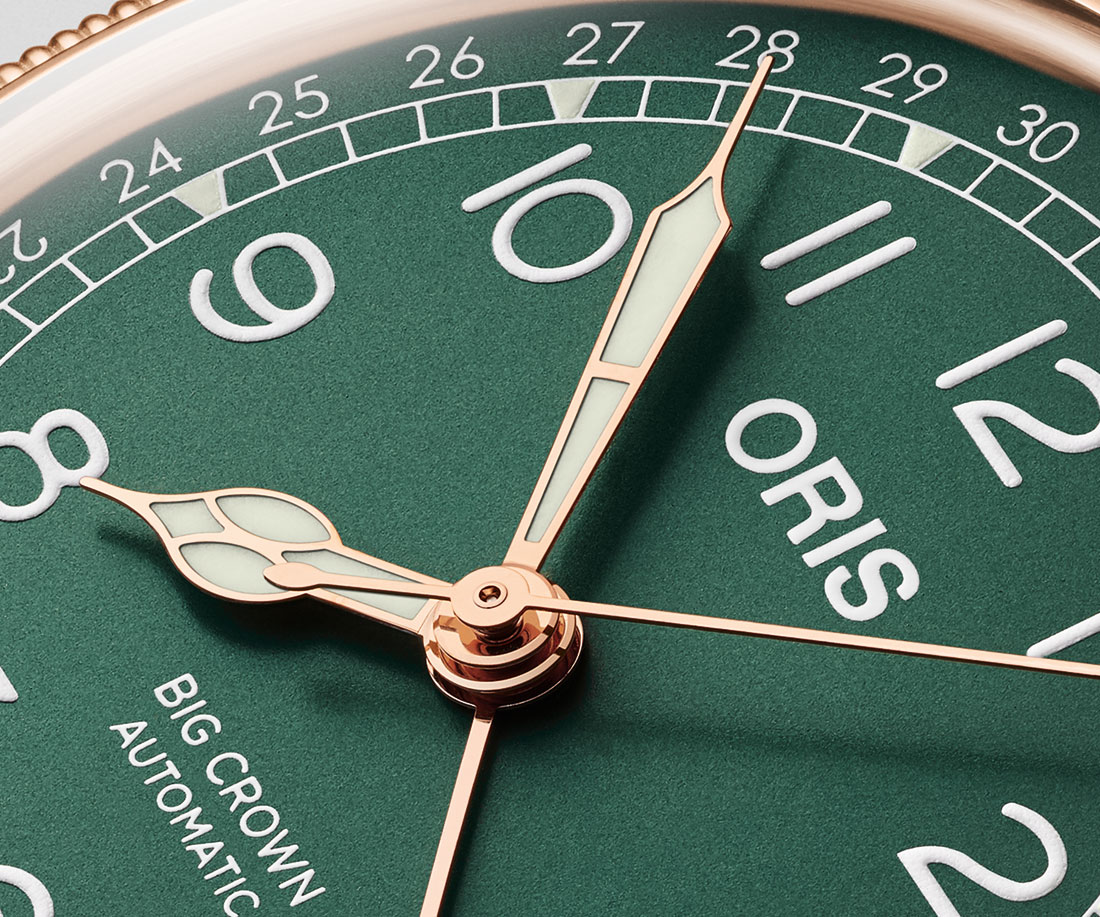 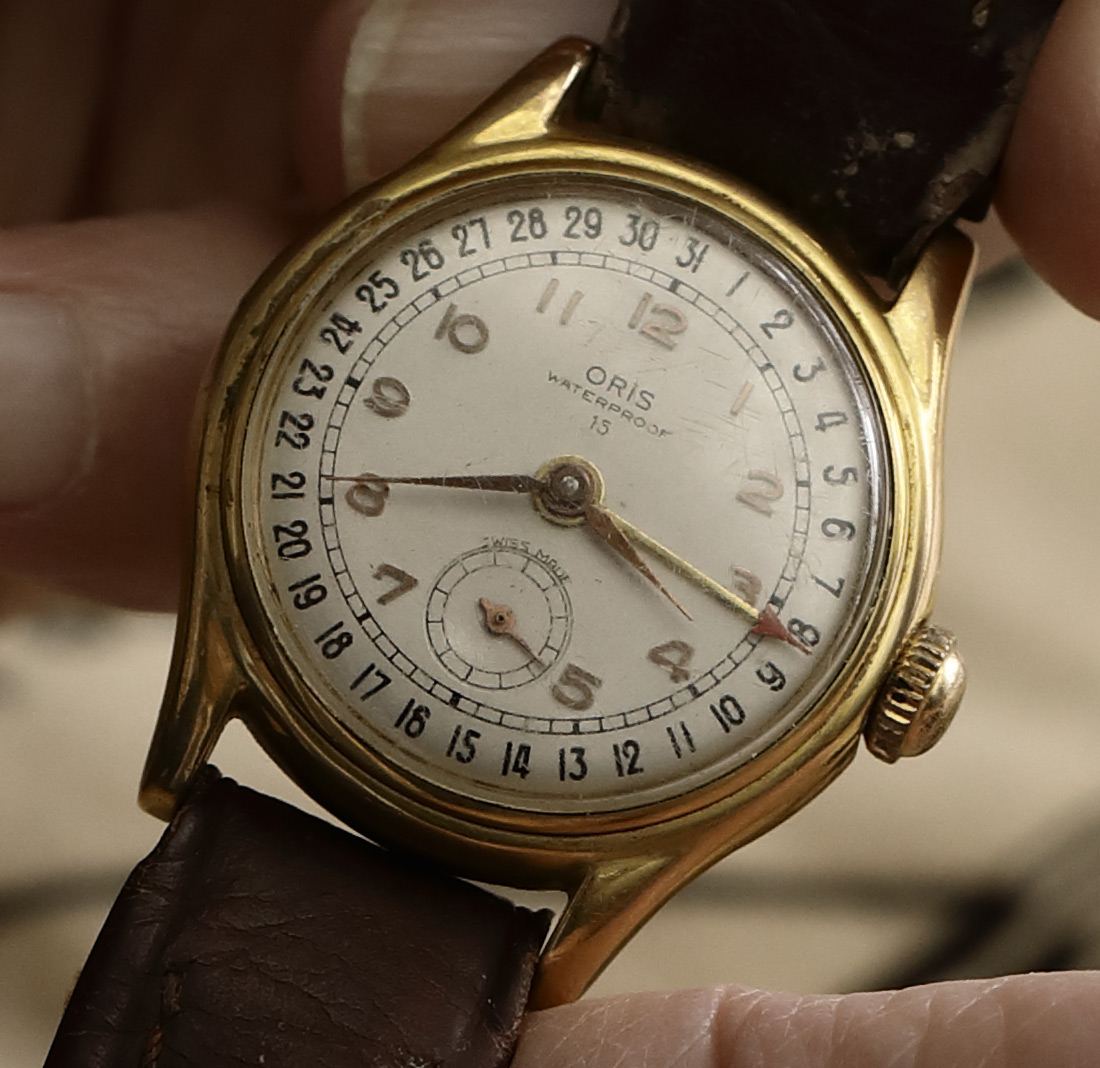 Before we get too deep into the watch itself, it’s worth pointing out that the pointer is actually the original expression of a date complication on a wristwatch. It was invented and quickly patented by watchmaker A. Hammerly from La Chaux-de-Fonds in 1915, who would also shortly thereafter patent the traditional recessed rotating date disc displayed through an aperture in the dial most commonly used today. A little over 20 years later, Oris would introduce its first watch using the complication, kicking off 80 years of constant production, and a lasting collection that would prove to outlive even the quartz crisis. 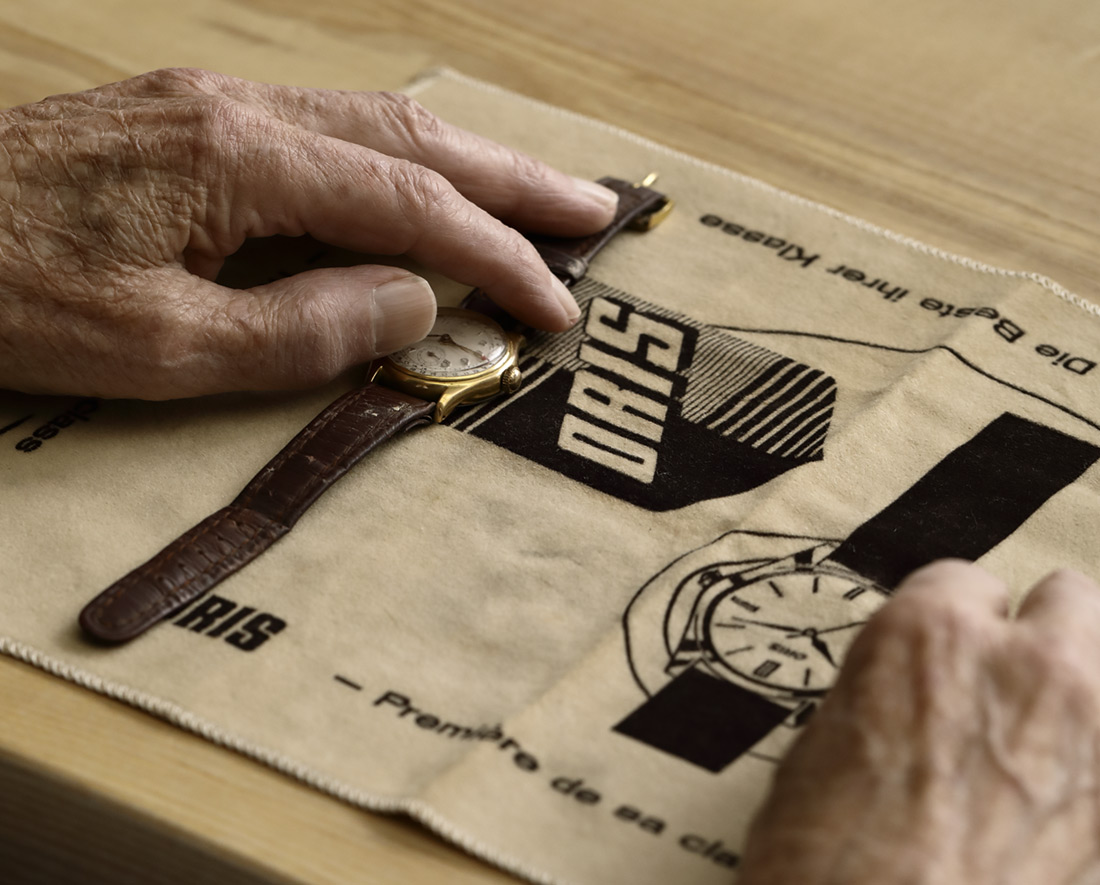 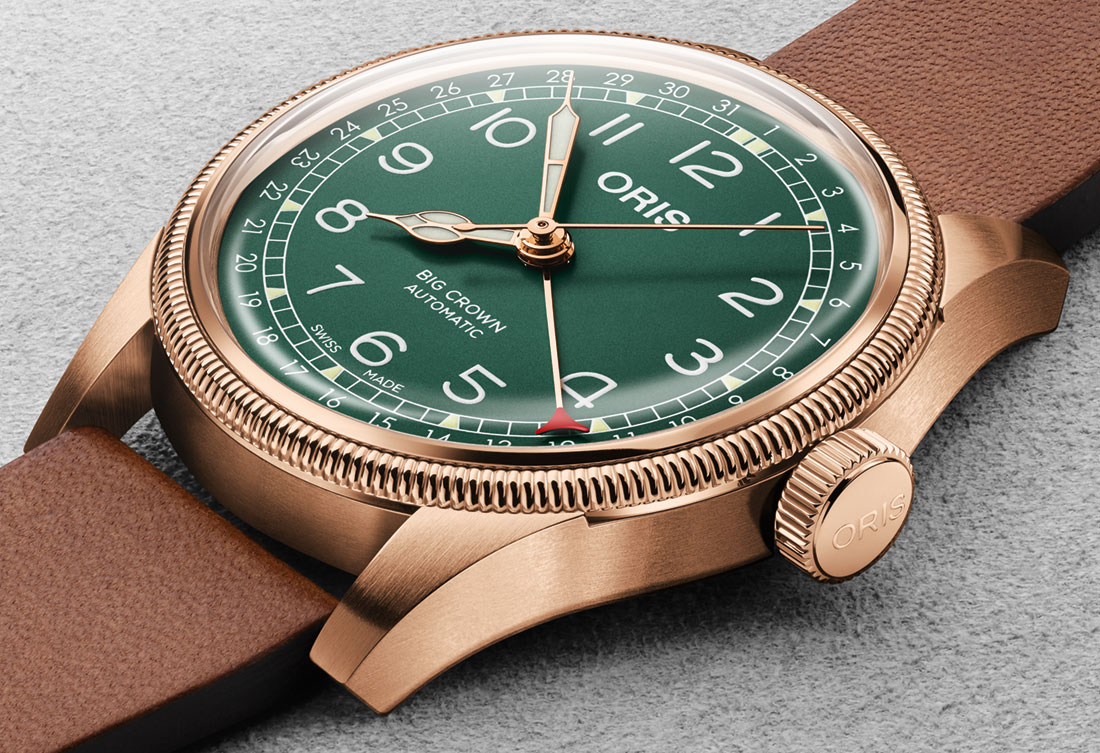 History notwithstanding, the Oris Pointer Date seems to also have struck a chord with the modern purist who demands dial symmetry but isn’t quite ready to totally relinquish the undeniable convenience of a date display. This particular Oris Big Crown Pointer Date differs slightly from the version we first saw introduced at Baselworld earlier this year – a 36mm bronze Pointer Date with a milky green dial. That particular release was somewhat significant as it marked the first time Oris made a bronze case available in a non-limited release, and the 80th Anniversary appears to continue that non-limited trend, but with a new British racing matte green dial, a red-tipped date indicator, and a slightly larger 40mm case; the latter of which should appease anyone (*slowly raises hand*) who thought 36mm was just a few hairs too small. 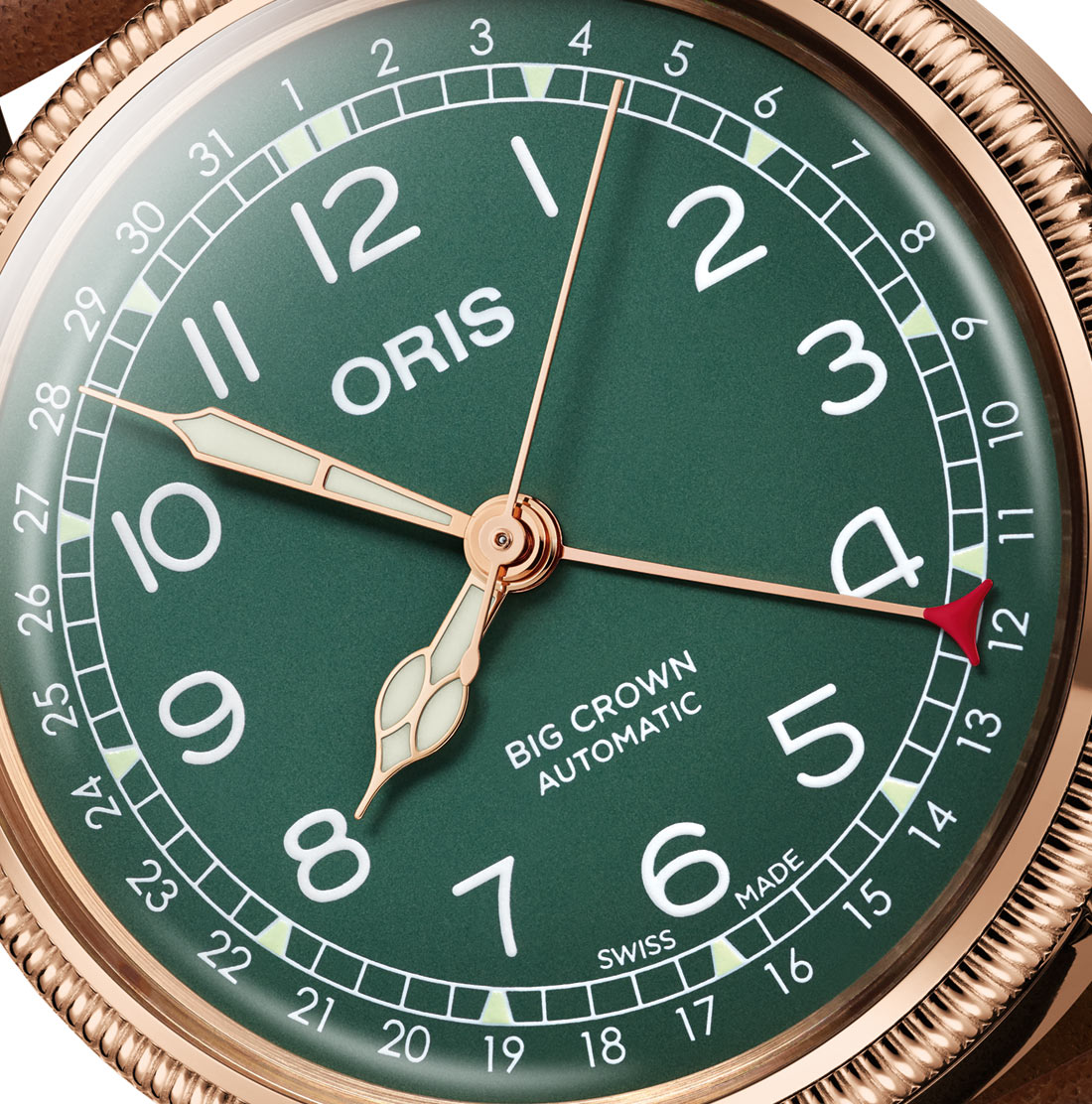 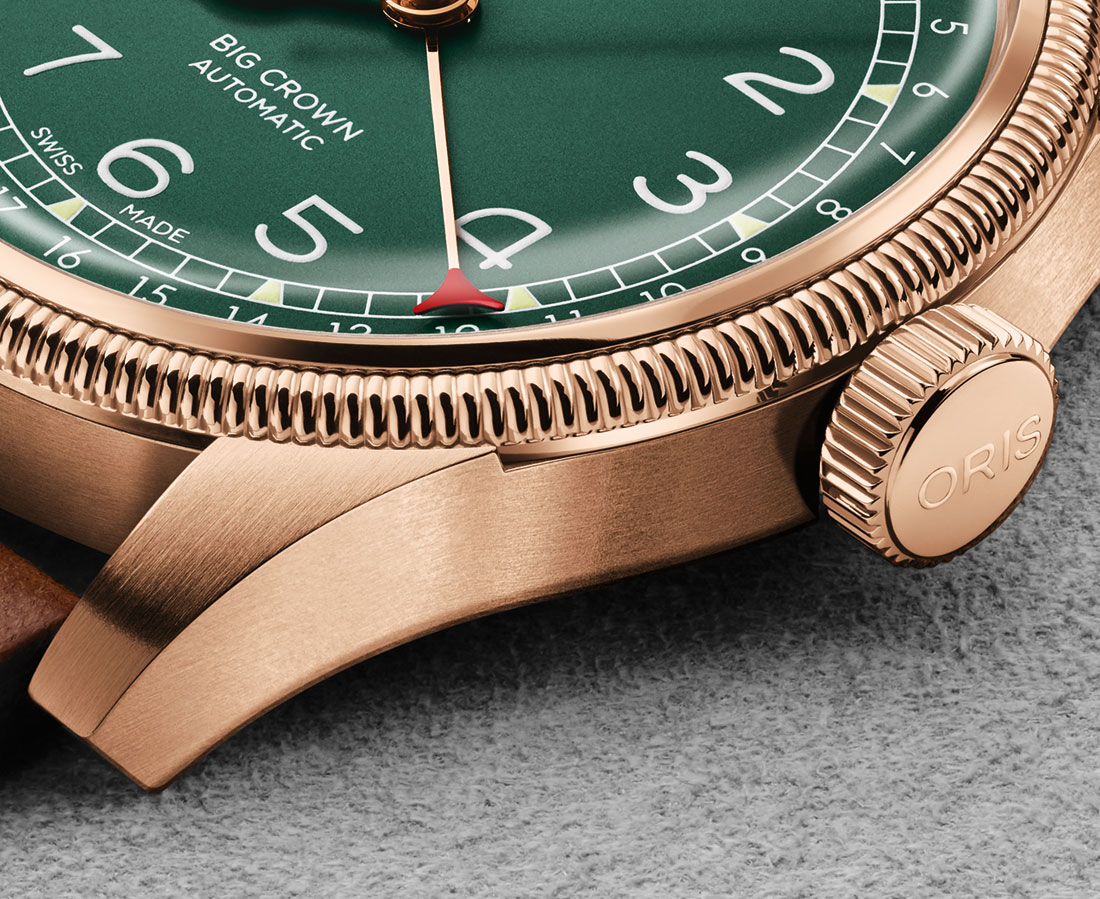 While most brands have been content to release only one or two watches to earn a participation medal in the recent bronze boom, Oris has widely deployed the alloy in multiple forms across multiple collections, starting with its wildly successful Carl Brashear 3-hand Diver 65 three years prior. Granted, the Pointer Date is far from a marine watch where bronze applications are typically found – it’s only water resistant to 50 meters, but the inevitably warm, gently worn-in bronze tones lend themselves just as nicely to vintage-style aviation watches. And since the Pointer Date follows the design codes of those early Big Crown pilot watches (many of which shared a similar gold-plated tone), the aesthetic still works really nicely here. 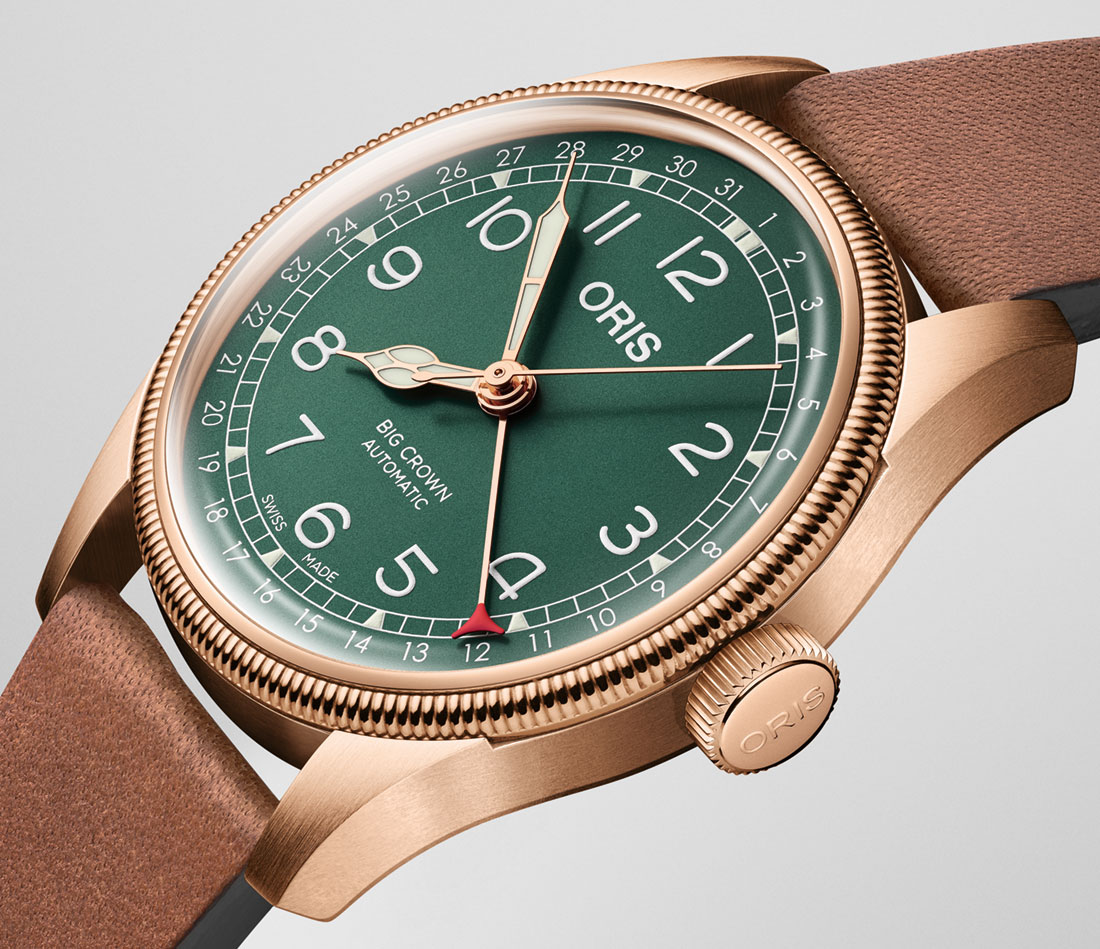 Like the rest of the modern Pointer Date watches, the 80th Anniversary is equipped with the Oris 754 automatic movement, which uses a Sellita SW200 as its base. Nothing too out of the ordinary here – it hacks, hand-winds, and the crescent-shaped date indicator quick-adjusts just like any other date wheel. The movement itself carries a pretty standard 40 hours of power reserve and a 4Hz oscillation rate. Despite being introduced under somewhat of a special occasion, the 80th Anniversary Bronze Pointer Date doesn’t carry any pricing premium over its non-limited bronze variant. It has an asking price of $2,000 USD. Head over to oris.ch for official pricing and purchase information.