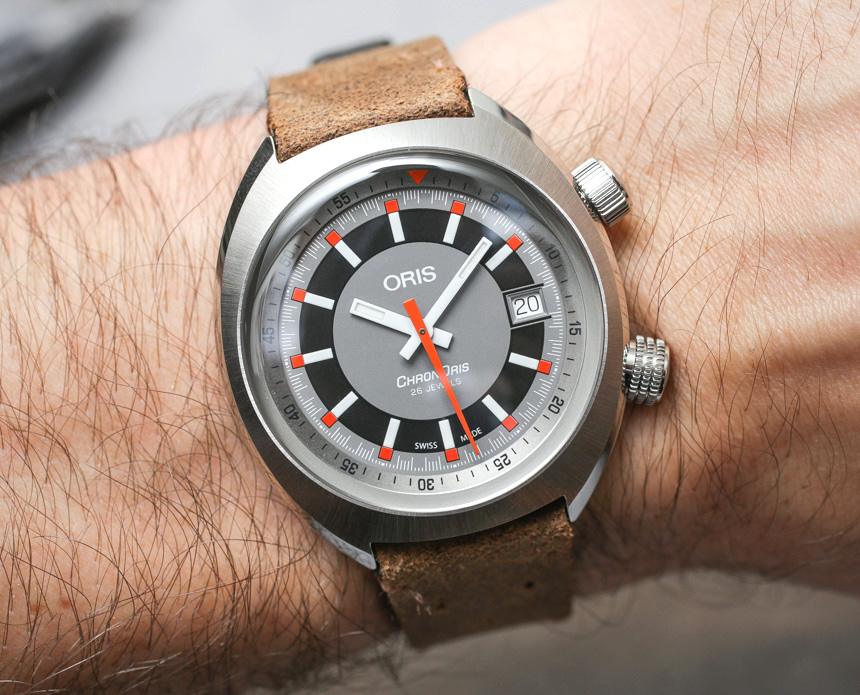 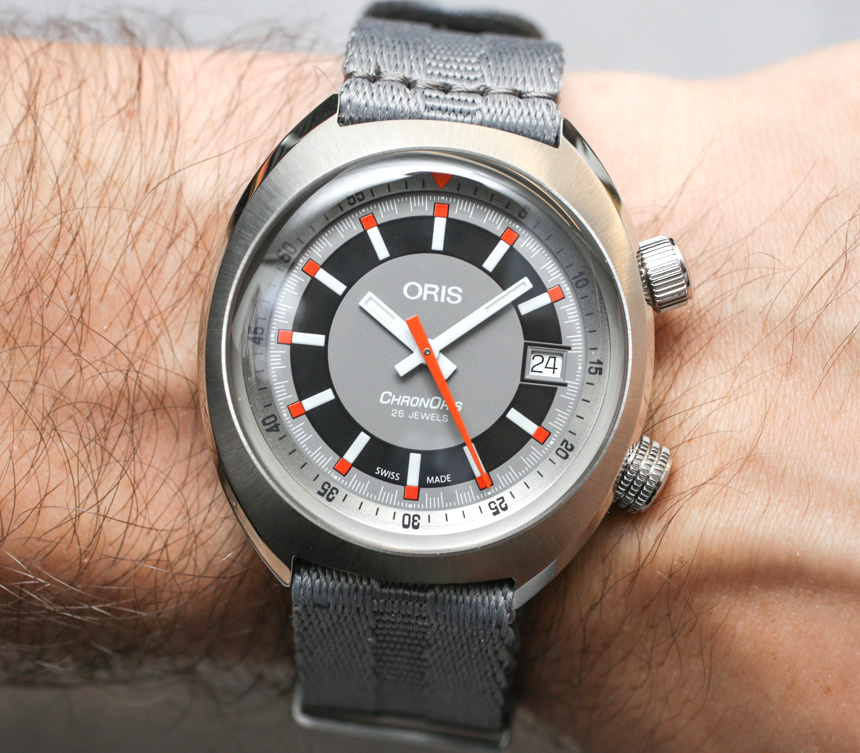 Originally released in 1970, the Oris Chronoris faithfully played the role of motorsports watch within Oris’ dense lineup of sports watches. Re-released a few years back as a retro-racing inspired chronograph, we now see a third version which fully embraces the watch world’s infatuation with all things vintage-inspired. The new Oris Chronoris Date is a faithful reinterpretation of the 1970s watch, sporting the dual crown design with internal elapsed time bezel in a 39mm tonneau case. 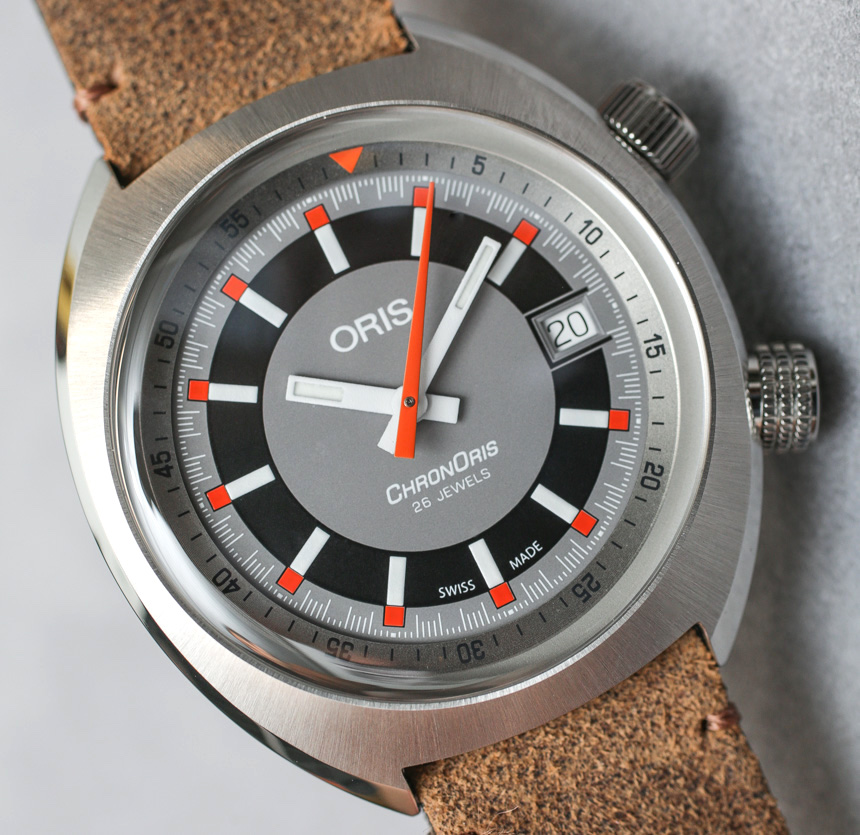 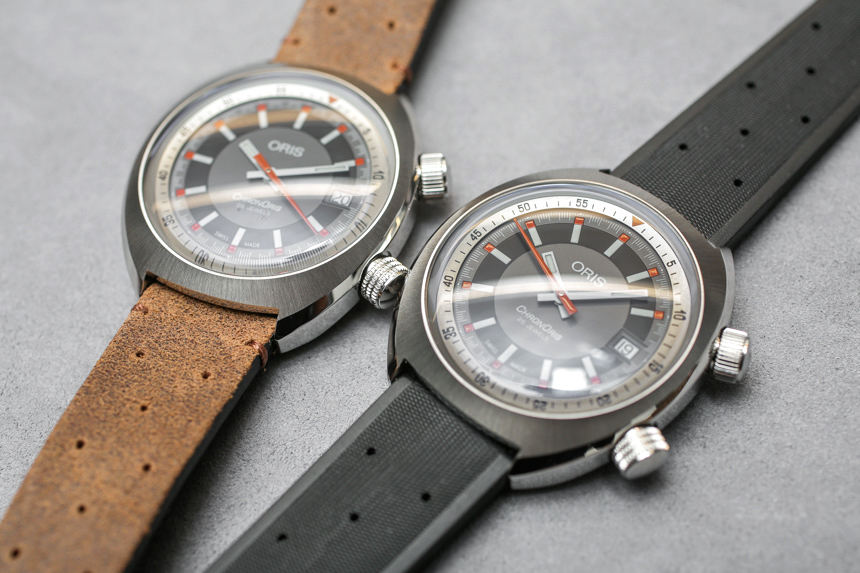 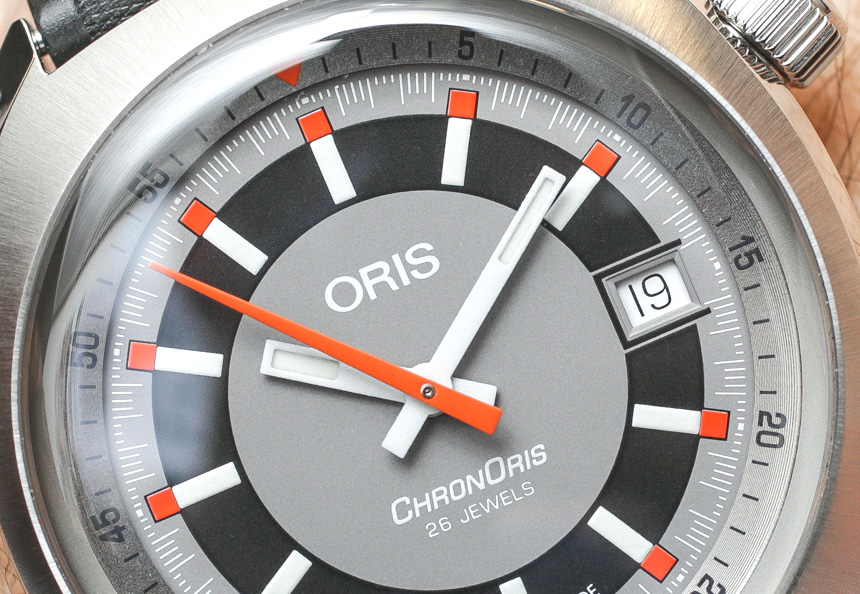 Oris, who have been collaborating with Williams F1 Racing since 2003, are no strangers to motorsports. With this in mind, their collection is unsurprisingly largely made up of the standard divers and sports watches, along with contemporary pieces such as the carbon fiber cased Oris Williams Chronograph Carbon Fiber Extreme. The addition of the Oris Chronoris Date to their collection represents Oris’ continued drive (get it?) to exist on both ends of the spectrum, producing watches which exist at the tip of the technological spear as well as pieces which harken back to their own history with driver’s watches. 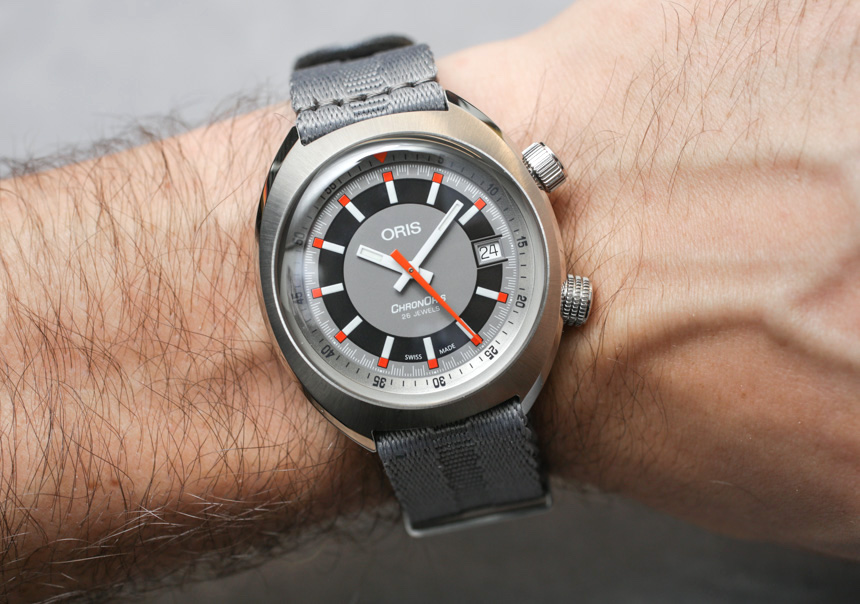 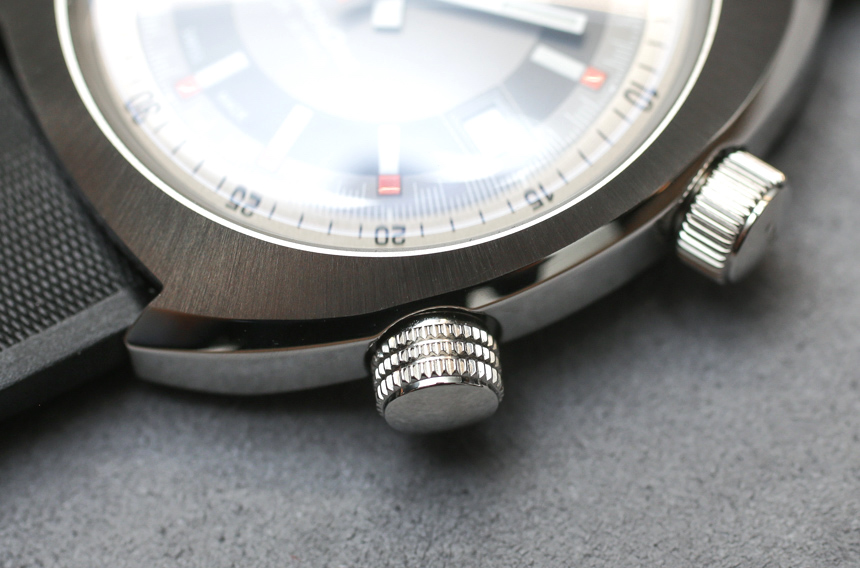 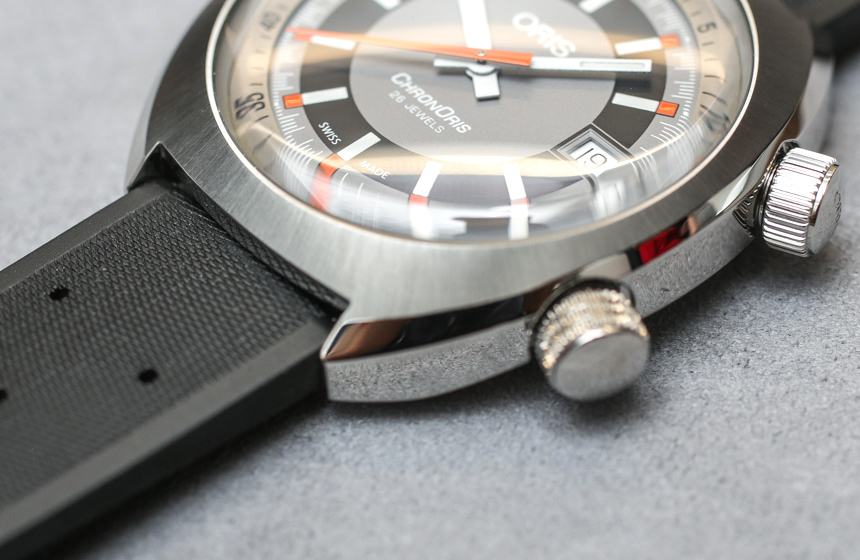 Visually at least, the new Oris Chronoris Date is a near perfect replica of one of their former Chronoris Star models which sported a single pusher-actuated Cal. 725 stop seconds chronograph movement as well as an internal bezel. This modern edition is comparatively simple, tracking only time and date, but with an elapsed time bezel to manage lap or other interval timing. 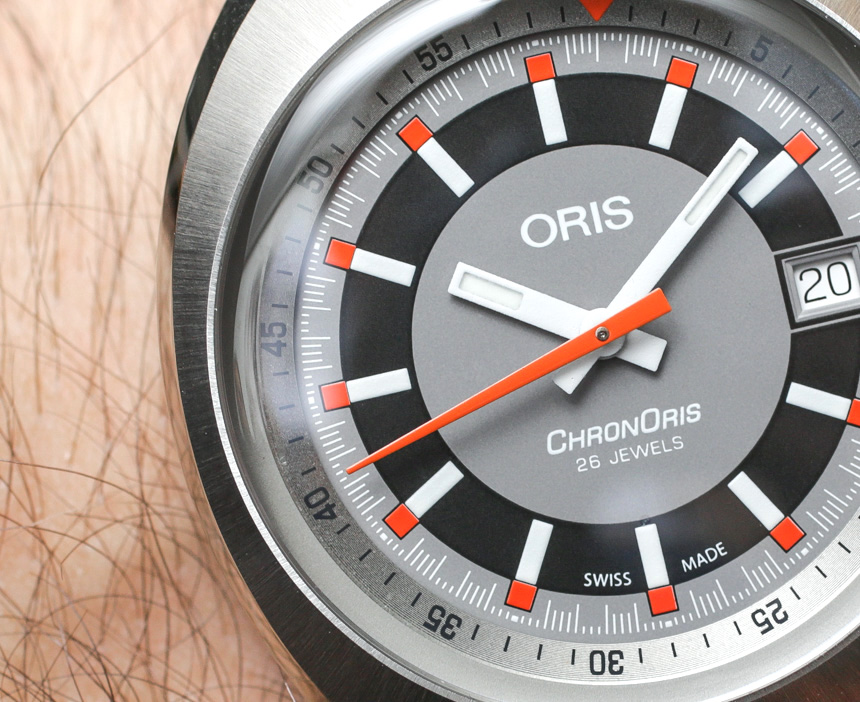 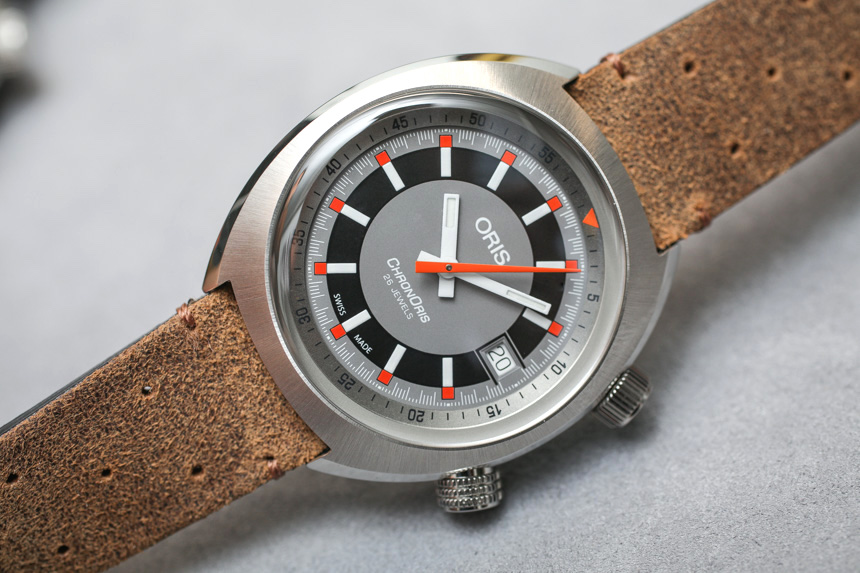 The Chronoris Date’s mostly grey dial with orange accents is sharp and, to my eye, doesn’t look exactly like anything else out there at the moment, an achievement in itself. Many seventies inspired watches are a little on the loud side, attempting to blend too many colors, complications, and sub-dials. The Oris Chronoris Date dial is actually pretty easy on the eyes with its grey and black sector dial, simple white stick hands, orange sweep seconds hand, and tasteful internal bezel also in silver with an orange twelve o’clock indicator to match the seconds hand. The black on white date wheel is in its usual three o’clock position. Viewed together, the package is highly legible while still maintaining an unmistakable racing look. 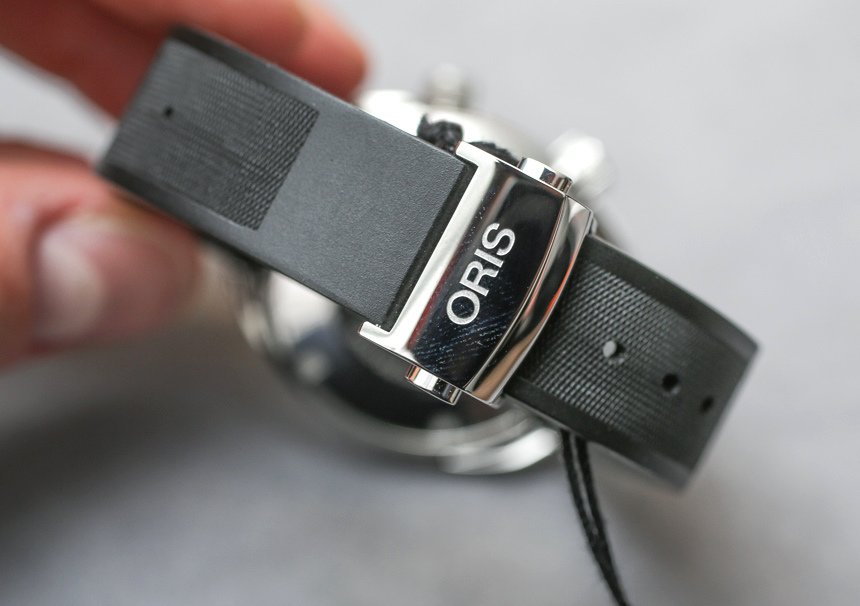 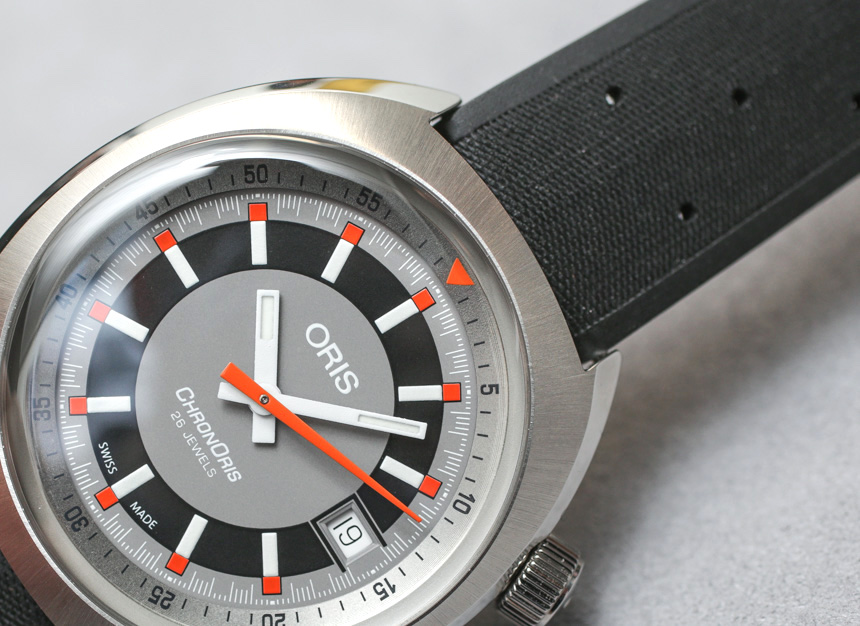 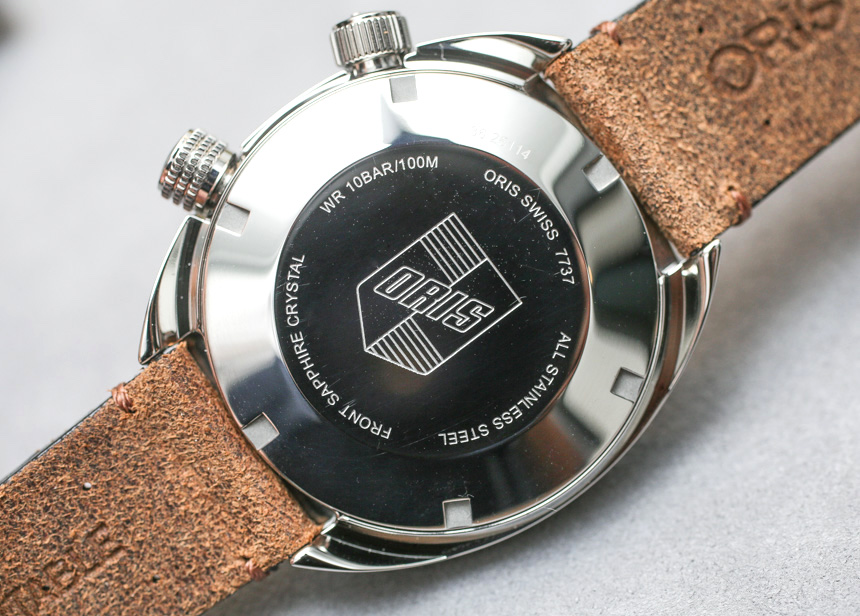 Dual crown watches were highly popular when the original Chronoris came out and their inclusion in this new piece speaks to the feel Oris were after when designing it. With one crown at four o’clock for setting or winding the Oris Cal 733, which is based on the Sellita SW200, and another at two o’clock for manipulating the bidirectional internal bezel, the Oris Chronoris Date speaks loudly about its seventies design heritage. It’s important to note here that the crowns are differently shaped with one having fine grooves and the other being knurled for grip. This would also allow the wearer to distinguish which crown they were manipulating without looking at it, which would be, I don’t know, helpful? The tonneau-shaped case with brushed top surfaces and polished sides aids in the old school look and adds some heft to an otherwise fairly narrow (by current standards) watch. 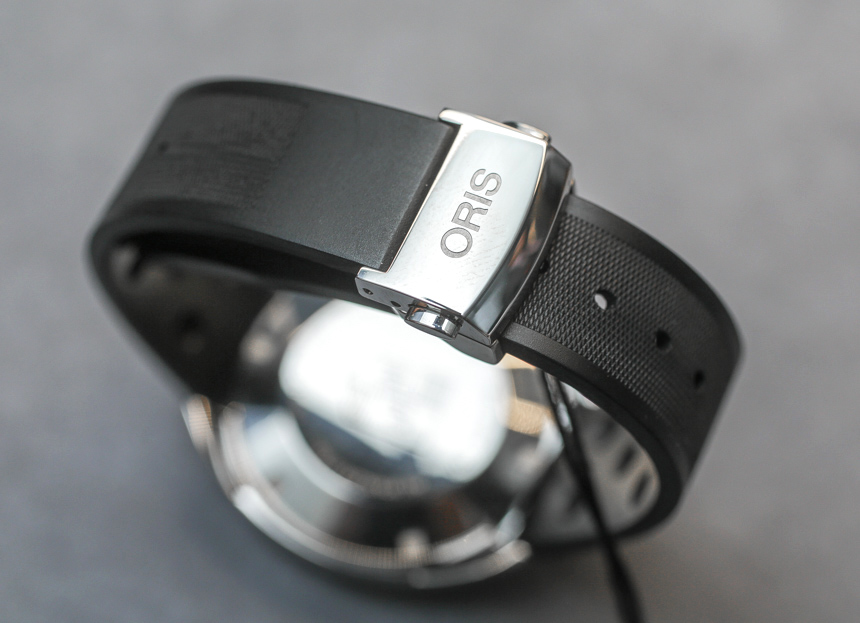 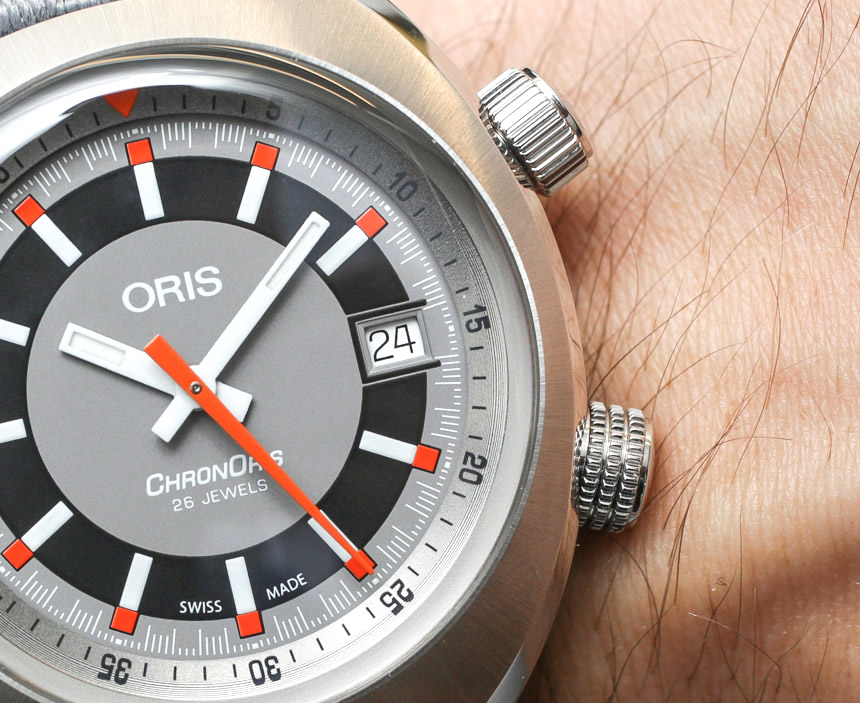 Sellita’s SW200 movement (which we’ve covered in depth, here) is a fairly obvious choice for a piece like this which Oris of course wants to keep Swiss-made but which perhaps doesn’t inherently require anything more complicated or interesting. The SW200 is more or less exactly the same thing as the ETA 2824-2, albeit produced by Sellita, and has proven itself to be a capable and durable timekeeper. For a time and date only watch like the Oris Chronoris Date, in a world where ETA is preparing to limit the availability of their movements, we can expect to see a lot of these SW200 movements in future pieces from various brands. 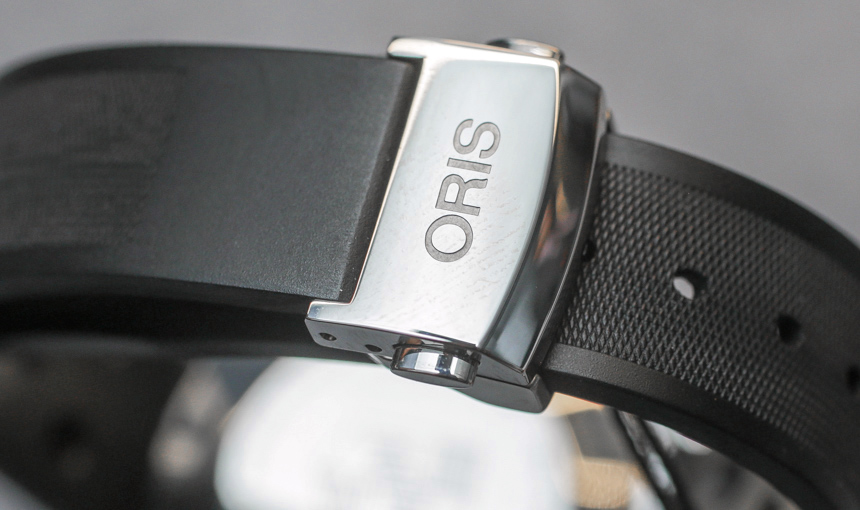 Completing the vintage aesthetic is the choice of strap which is either a black or brown distressed leather strap with a signed buckle, a textured grey NATO with a signed buckle and keeper, or a very old school looking, almost “beads of rice” style bracelet. 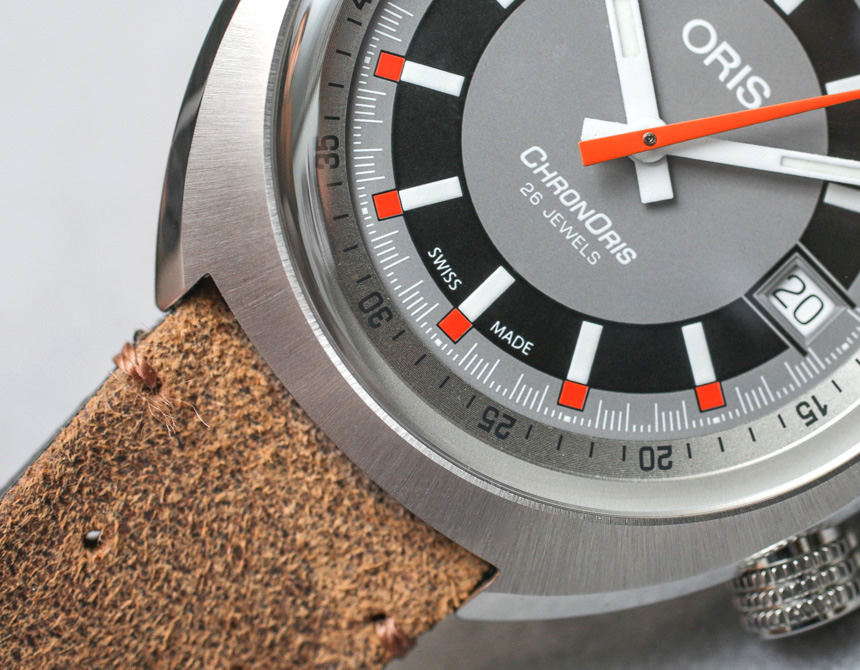 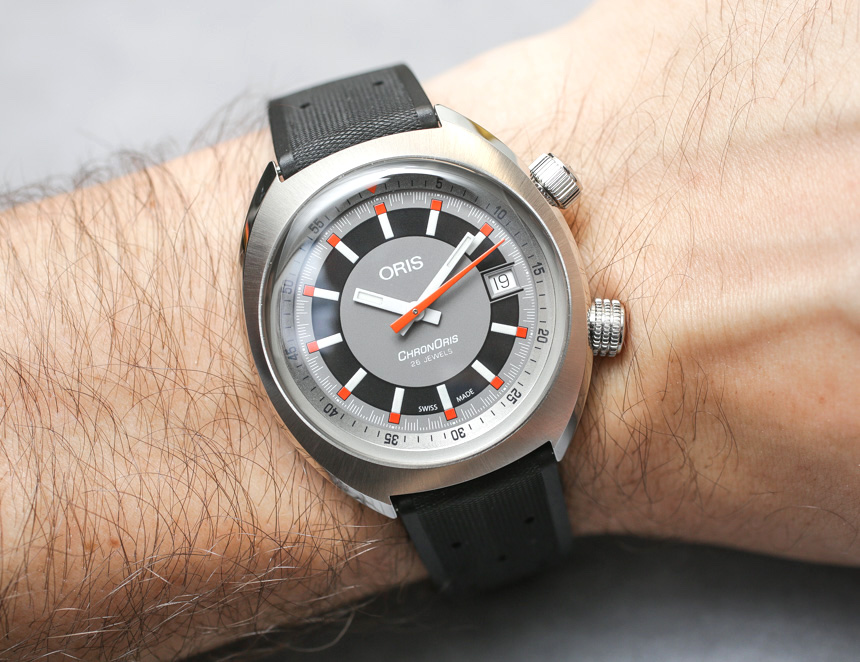 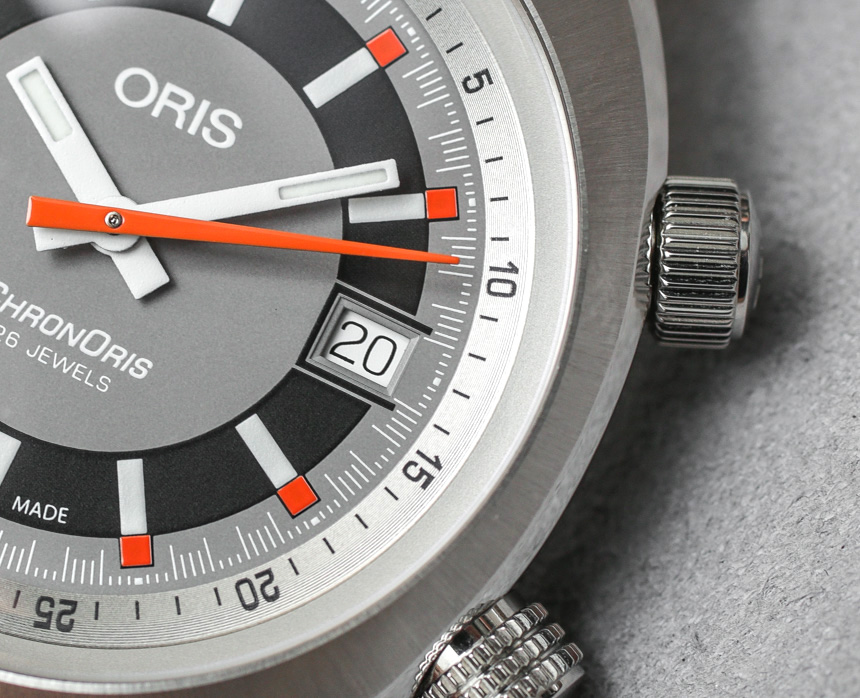 Oris have done a cool thing with the Chronoris Date in that they have designed a highly legible and functional piece that faithfully recreates a classic racing watch by not messing around with the design too much. Those who are unfamiliar with the vintage model may not even think of motorsports when they see the Oris Chronoris Date. Ultimately, the Chronoris is a tasteful heritage piece in a nowadays rare, smaller size which would make a near perfect daily wearer at a price of $1,750 on either strap or $1,950 for the version with a bracelet. oris.ch