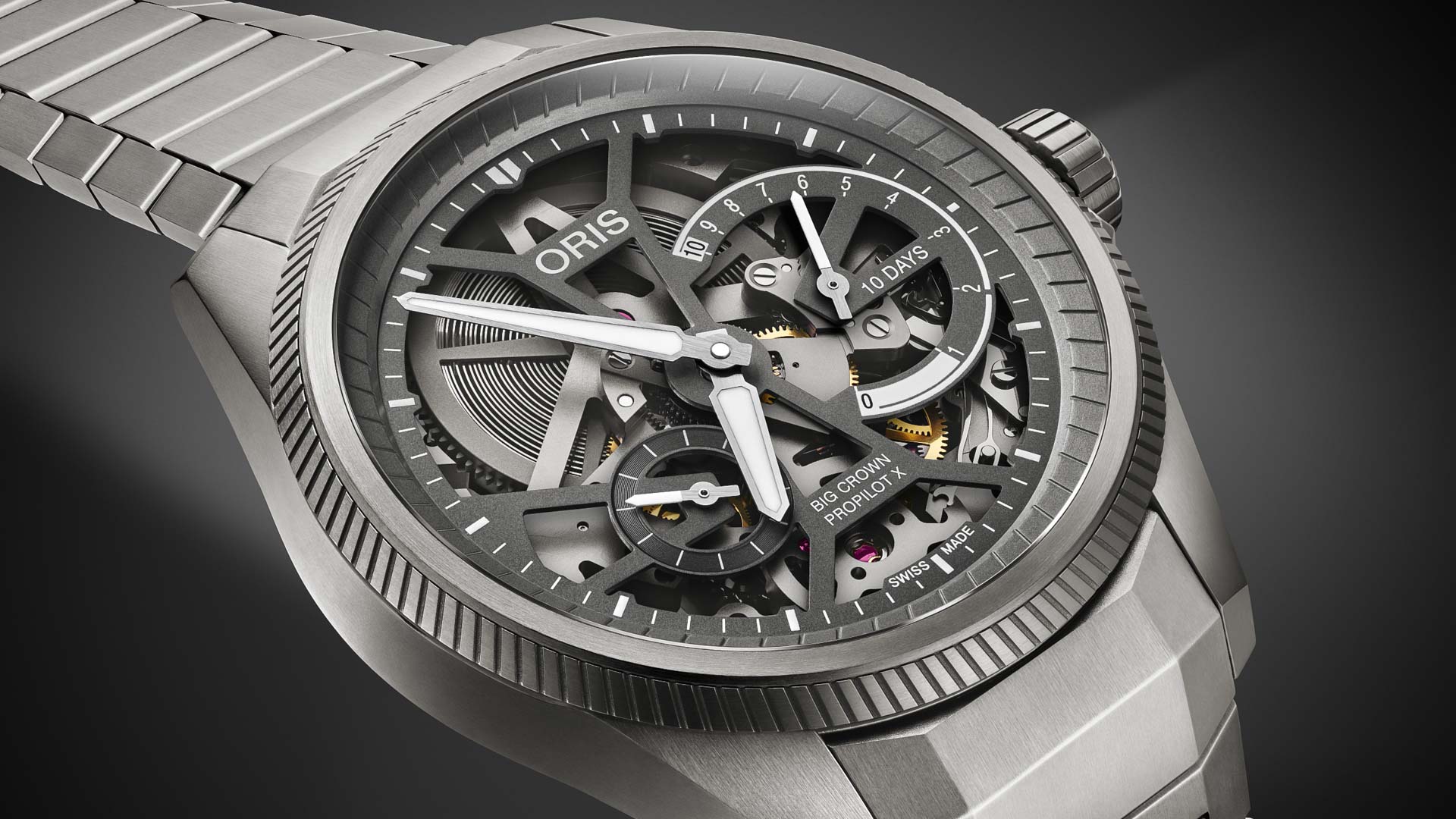 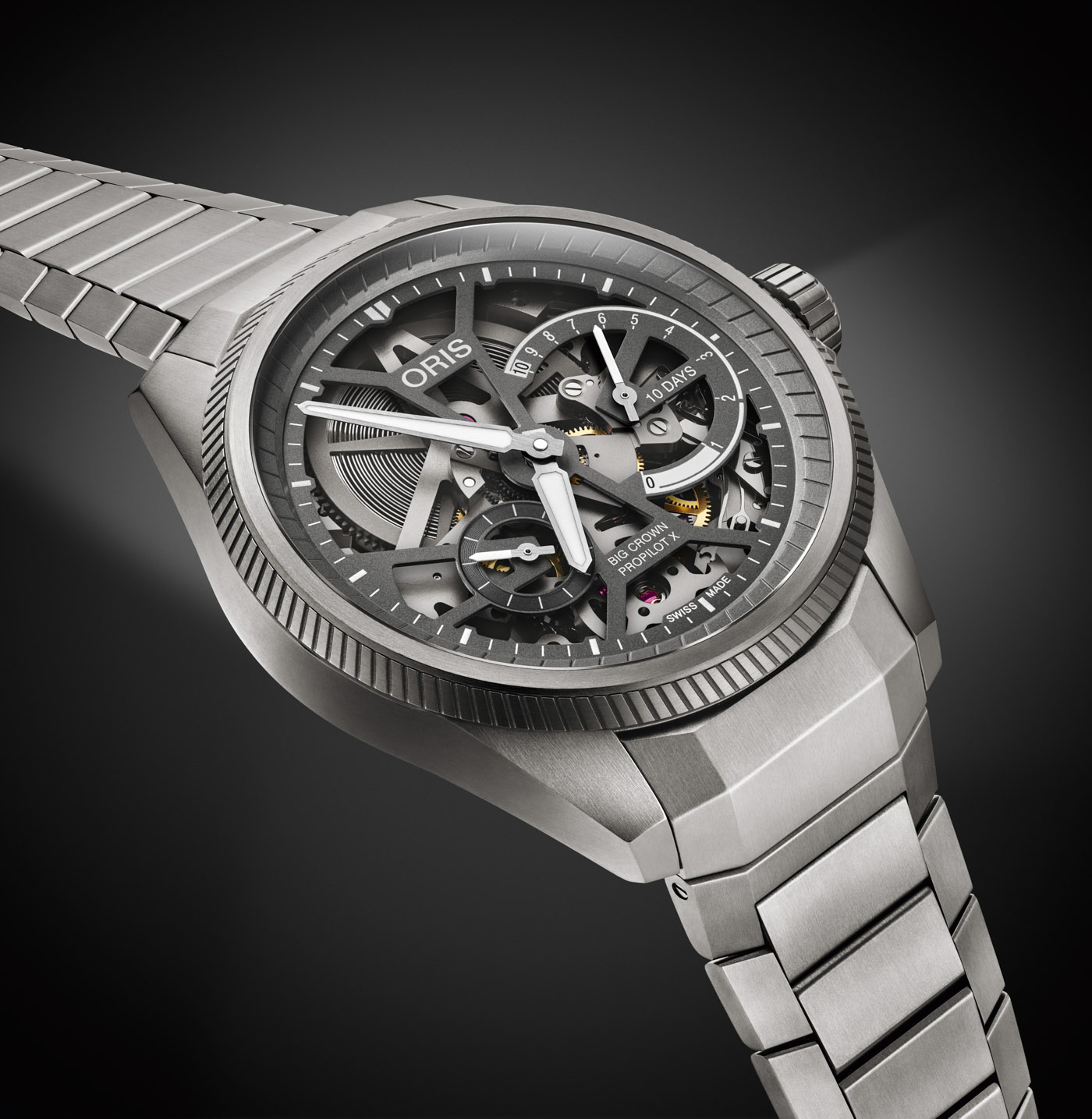 Swiss Oris does something really different for 2019 with the brand new Oris Big Crown ProPilot X collection that includes the new exclusive Calibre 15 movement. The first part of this news piece will talk about the watch industry context within which a watch like this is born, and then I’ll proceed to discuss the watch itself. While this article does not include hands-on images of the ProPilot X (“PPX,” as I believe it will be called), I was able to personally check out the watch with Oris at Baselworld 2019.

The watch industry is finally coming off of its vintage watch re-issue kick — because consumers (and brand managers) have had enough. Vintage re-issue watches were popular for a number of reasons, but mainly because they were a safe bet and consumers seemed to favor them, for a while. Oris has been a company that, for the most part, was into modern timepieces, but really embraced the vintage watch re-issue trend with gusto — and it earned the brand a good degree of success with consumers. Eventually, mechanical watch brands started to realize that there really isn’t a future in just regurgitating the past. Plus, innovation and fresh designs are needed to keep customers interested. 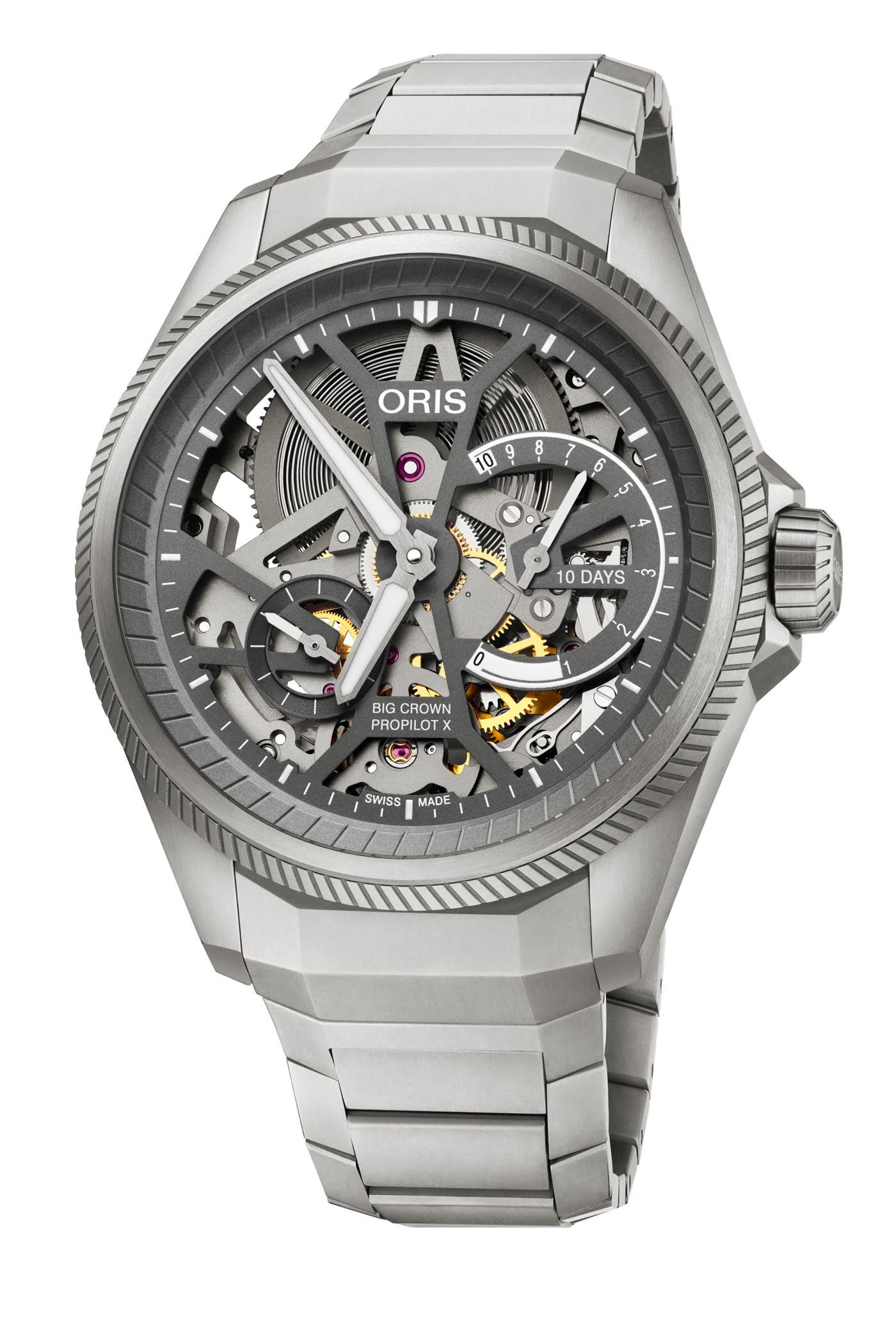 At the same time, the “bracelet watch,” such as the Audemars Piguet Royal Oak, has been experiencing a relative surge in popularity with consumers. There are a number of reasons for this, but these watches are different from tool watches (which is the traditional forte of Oris) in a number of key ways. Gerald Genta is being so widely celebrated for his work these days because he saw past the appeal of the tool watch and understood that functional jewelry was one important future for mechanical watches. Thus, a “bracelet watch” is really functional men’s jewelry… and that is what Oris has produced with the ProPilot X (they just find it so difficult to say that).

The Oris PPX press release comes with an interview in which Oris executives do a pretty good job explaining where the Oris ProPilot X came from, but they never really get around to explaining why it was made, and for whom. That is what I am trying to fill in by explaining that this is really the first dedicated jewelry watch (for men) that I’ve seen from Oris — and something that the “tool watch” company isn’t really accustomed to talking about yet. 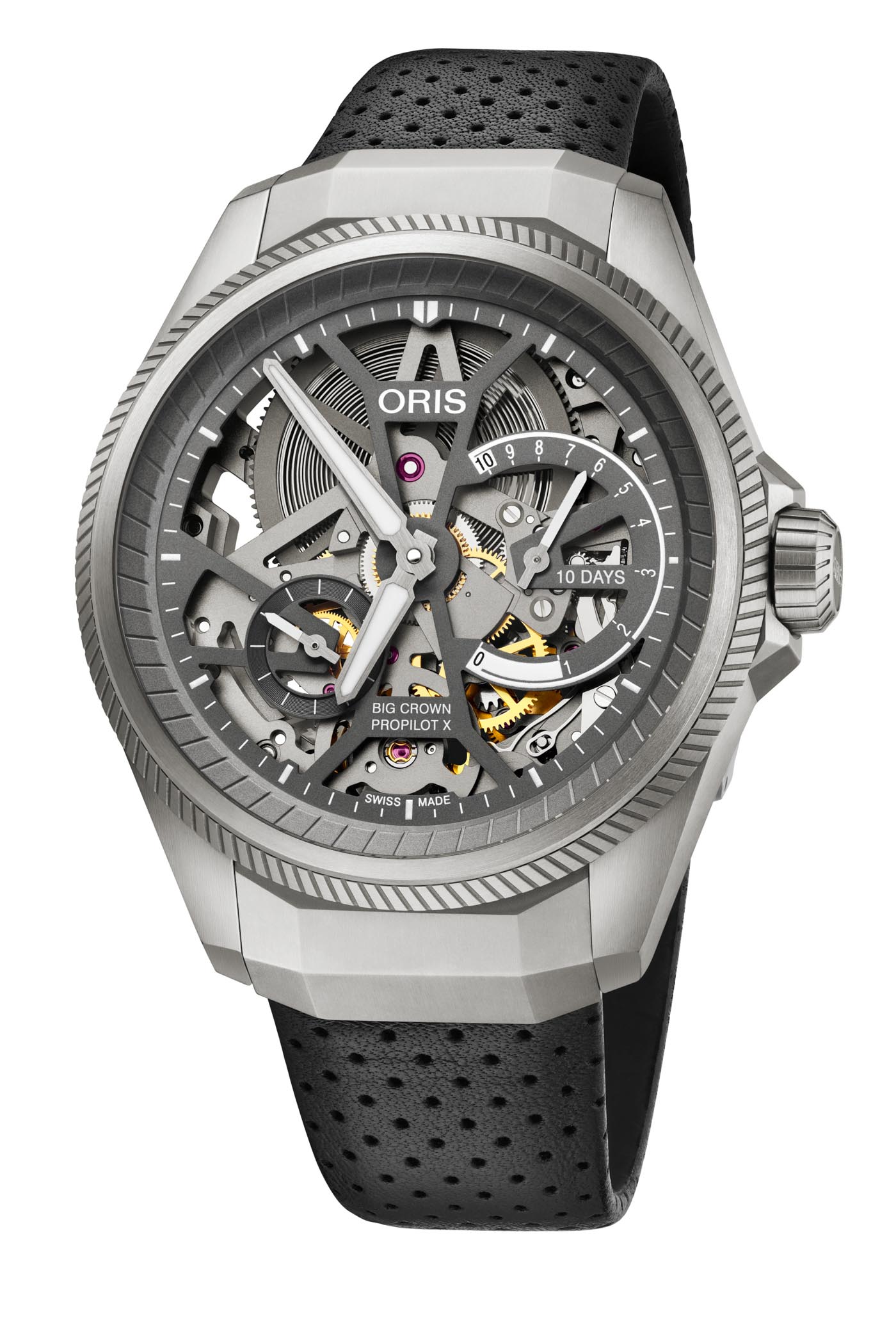 A case in point is the name of the product. Oris actually quotes the designer of the ProPilot X as saying that the PPX is “not a conventional pilot’s watch.” The implication is that is wasn’t designed to serve any particular purpose or be on any particular aviation professional’s wrist. Yes, the watch is inspired by some aviation watch aesthetic elements, but I really see this as being an Oris-inspired new watch. The skeletonization and overall aesthetic are really about trying to look cool, have good legibility, and be something that is distinctively Oris. Their job was, first and foremost, to make something pretty. They succeeded. But they didn’t get around to naming it properly.

In my estimation, the “Big Crown ProPilot” part of the name is a total distraction. Oris will be wise to carve out an entirely new product category. If they can’t find a better name, then they can just call this watch the “PPX Calibre 115” or somesuch. Being part of the Big Crown ProPilot collection just confuses people into thinking the X is a tool watch when it ain’t.

An attractive, legible, technically interesting, and comfortable watch the PPX is. The all-titanium case and available bracelet (there is a strap version, as well) are sharply designed in grade 5 titanium; the case is 44mm-wide and water-resistant to 100 meters. The turbine-style bezel is borrowed from the Oris ProPilot collection, and you see nods to other Oris aesthetics all over the PPX. It does, however, have a brand new case and bracelet (along with the movement), so it is entirely distinct.

What I really found nice is that the dial is legible, albeit skeletonized. Oris made sure that the PPX’s hands are large enough and that the dial still has a traditional hour and minute track. No hand-finishing goes into the movement bridges, so everything has an industrial feel to it. That actually isn’t uncommon these days in watchmaking, and the ProPilot X’s Calibre 115’s movement uses these industrial surface finishes as part of the overall design statement the watch is trying to make. 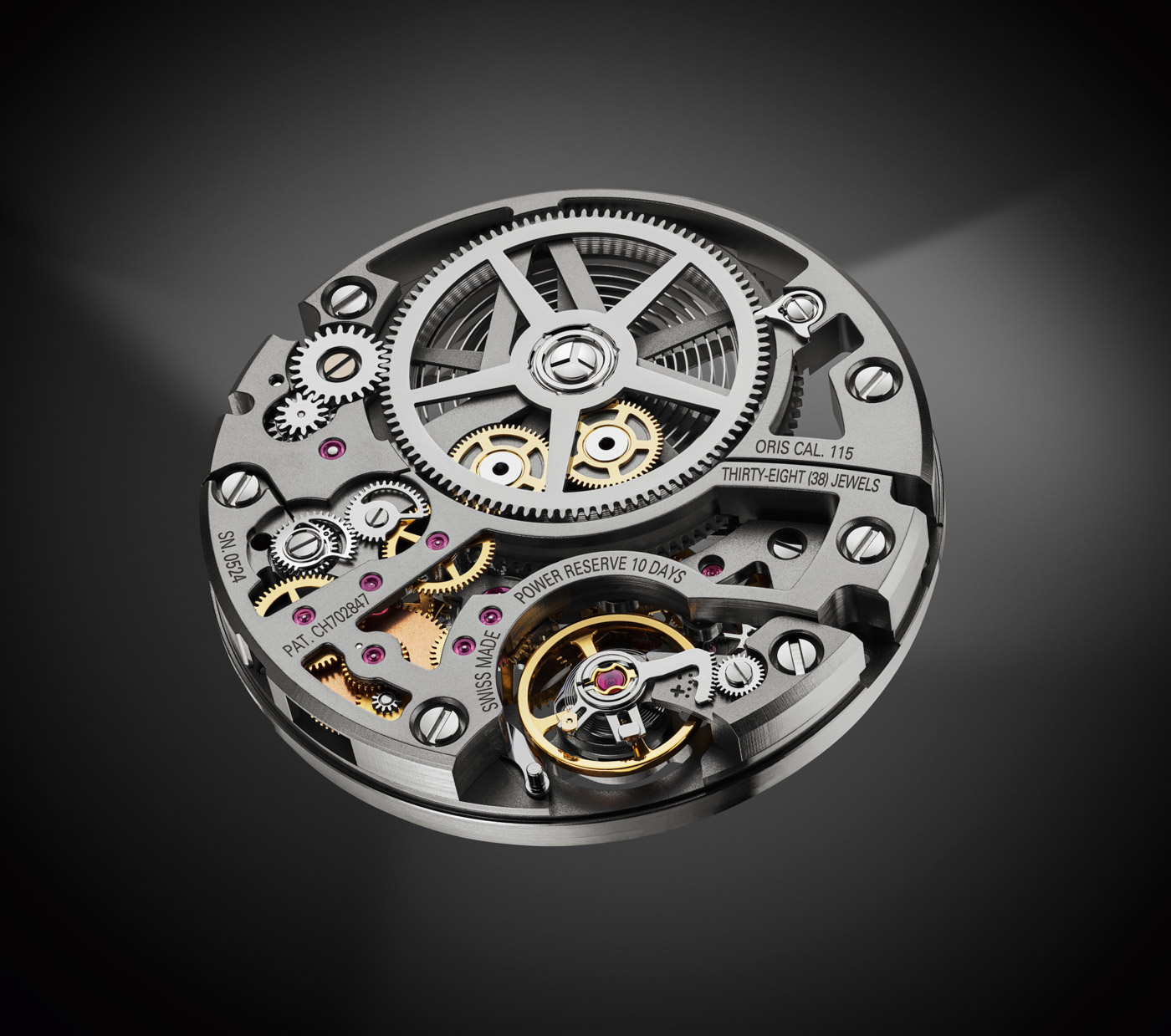 The Calibre 115 is another of Oris’ exclusive movements that the brand doesn’t produce but that is designed by them and exclusively made for them. The manually wound movement has a “non-linear” power-reserve indicator (which just means that the power-reserve indicator hand moves at a different rate — your eye won’t notice it moving) and a total power reserve of a very long 240 hours. That is a total of 10 days. In addition to the large power-reserve hand, the dial also has the time and subsidiary seconds dial at 8 o’clock. Oris did not include the frequency of the Calibre 115 watch in its press release, for some reason, but I believe that, if it is like the rest of the Calibre 110 family, it operates at 3Hz.

Oris’ design team did a really nice job with the overall movement bridge skeletonization in order to make the Caliber 110 family into the 115. The overall composition mixes symmetrical elements with asymmetry that I feel nicely plays with the naturally eccentric layout of the dial indicators. In medical photography, the contrast between the elements is always high, but recall that most of the dial colors here are gray — with the brass and ruby tones from the movement being more subtle. In a lot of ways, this is a very “gray” watch, but I do like how, with ample lume and hand contrast, you can still read the time easily. 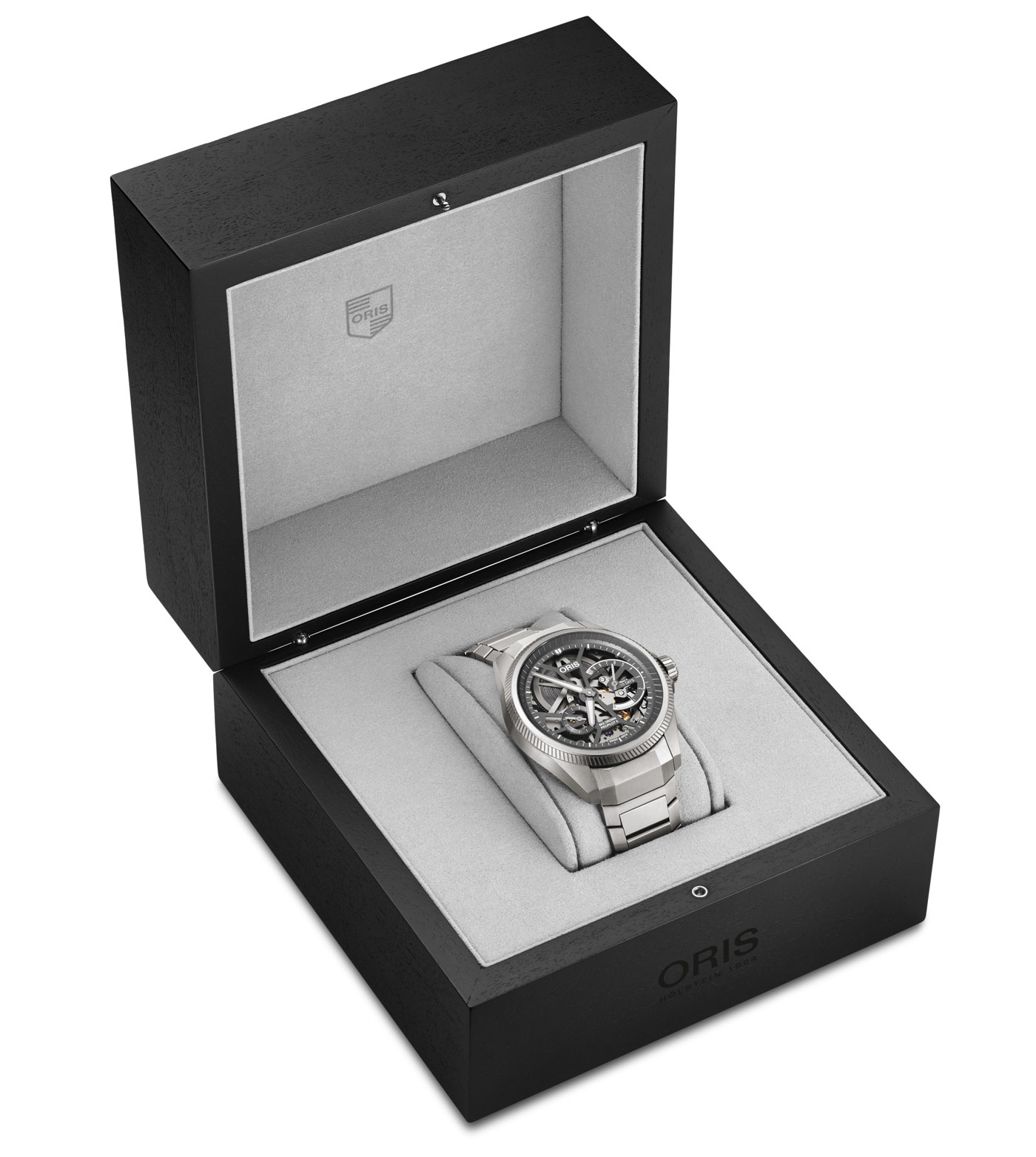 While you can get a black leather strap (with Oris’ great “seatbelt buckle” in titanium) on the Oris ProPilot X Calibre 115 watch (reference 115 7759 7153 5 22 04 TLC), I think the wisest route is to go with the intentionally designed matching titanium bracelet. The bracelet on the Big Crown ProPilot X Calibre 115 (reference 115 7759 7153 7 22 01 TLC) watch is designed to match the case and is a play on the traditional three-link bracelet, which includes thick facets on the edges for a more modern and three-dimensional look. The price is to be expected for a product this novel and distinctive for Oris, but I wouldn’t call it overpriced. The Oris Big Crown ProPilot X Calibre 115 watch in titanium is $7,200 USD on the leather strap and $7,600 USD on the titanium bracelet. See more at the Oris website here.