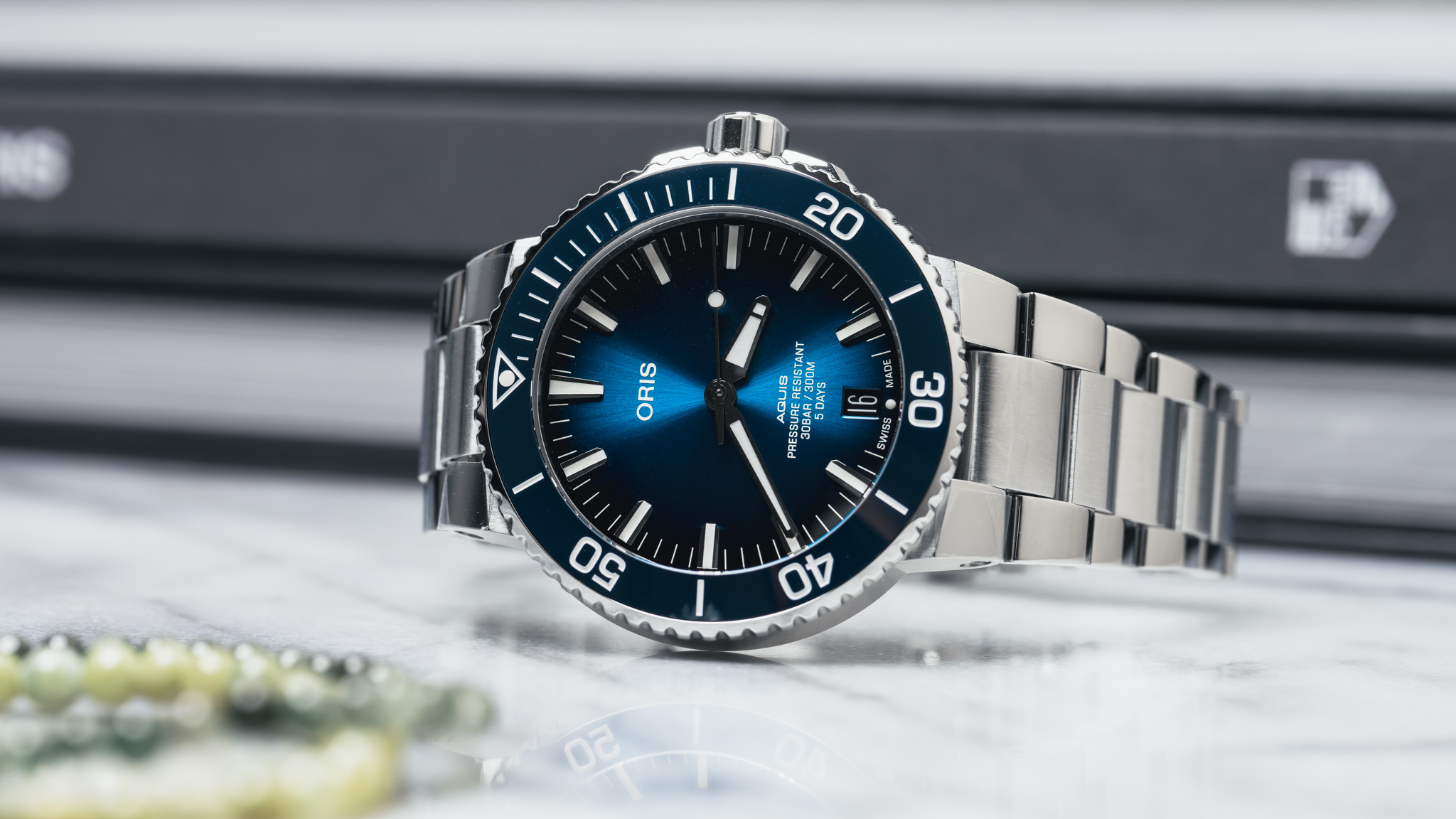 First unveiled in mid-October 2020, Oris’ new manufacture Calibre 400 movement signaled a major step forward in the brand’s movement making capabilities. Boasting a massive 120-hour power reserve, accuracy well within COSC chronometer standards (although Oris does not submit these movements for COSC certification), and a robust 10-year recommended service interval, the Calibre 400 caused a sizeable stir among enthusiasts during its initial announcement. Now Oris has announced the first watch to use this new movement, selecting its cornerstone Aquis series of divers for the task. The new Oris Aquis Date Calibre 400 leaves the classic styling cues of the series intact, keeping the focus on its new and dynamic movement. 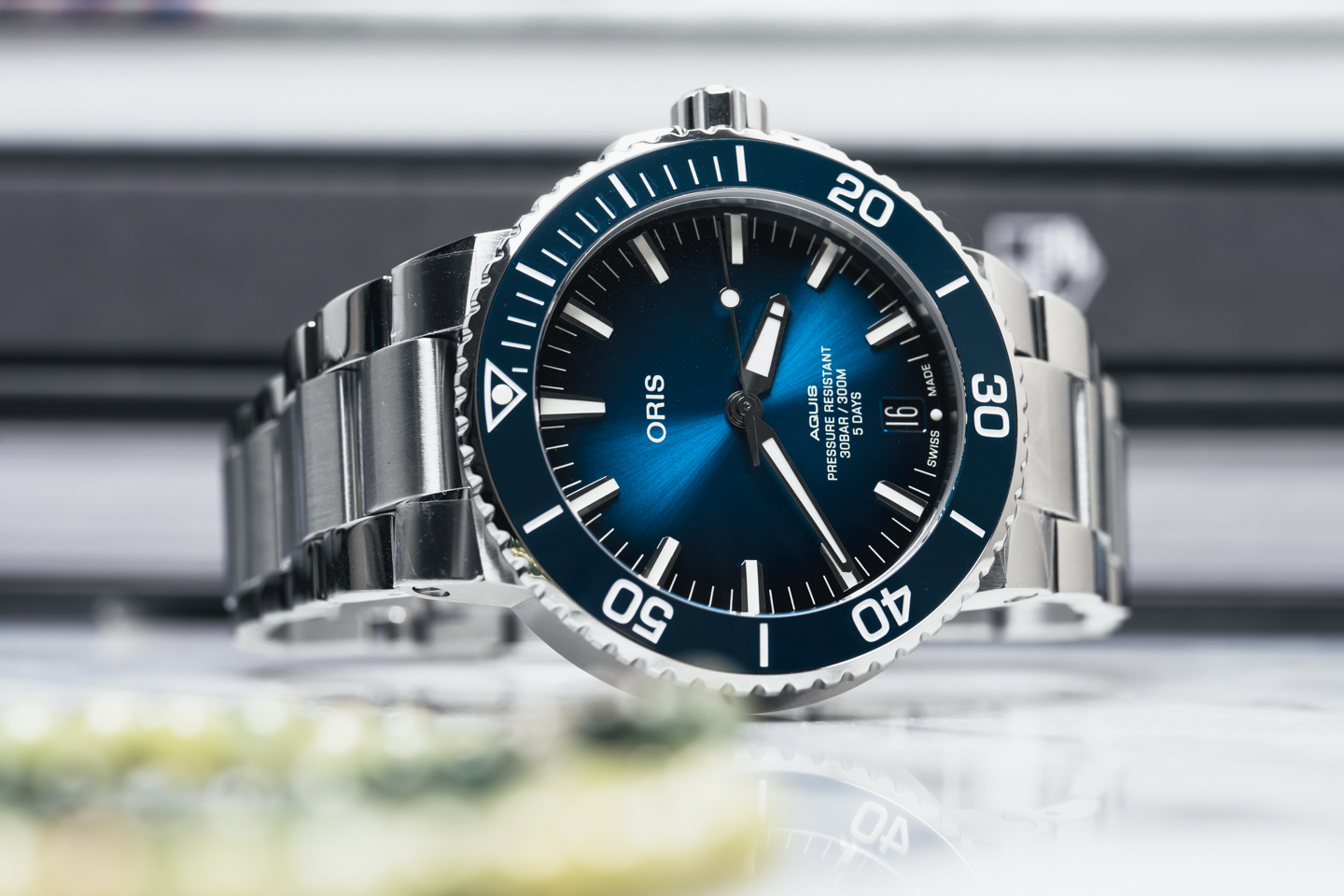 The 43.5mm stainless steel case of the Oris Aquis Date Calibre 400 follows the series’ signature look, with nearly cylindrical proportions, aggressive blocky crown guards, and wide semi-integrated lugs. Like other iterations of the Aquis, the case dimensions will likely be misleading here, as the wide bezel along with the short lugs with their pronounced downward angle should help to make this design appear more compact on the wrist. With 300 meters of water resistance, it’s a solidly functional dive watch case, with added flourishes from Oris including a deep royal blue ceramic bezel insert and a sapphire display caseback. 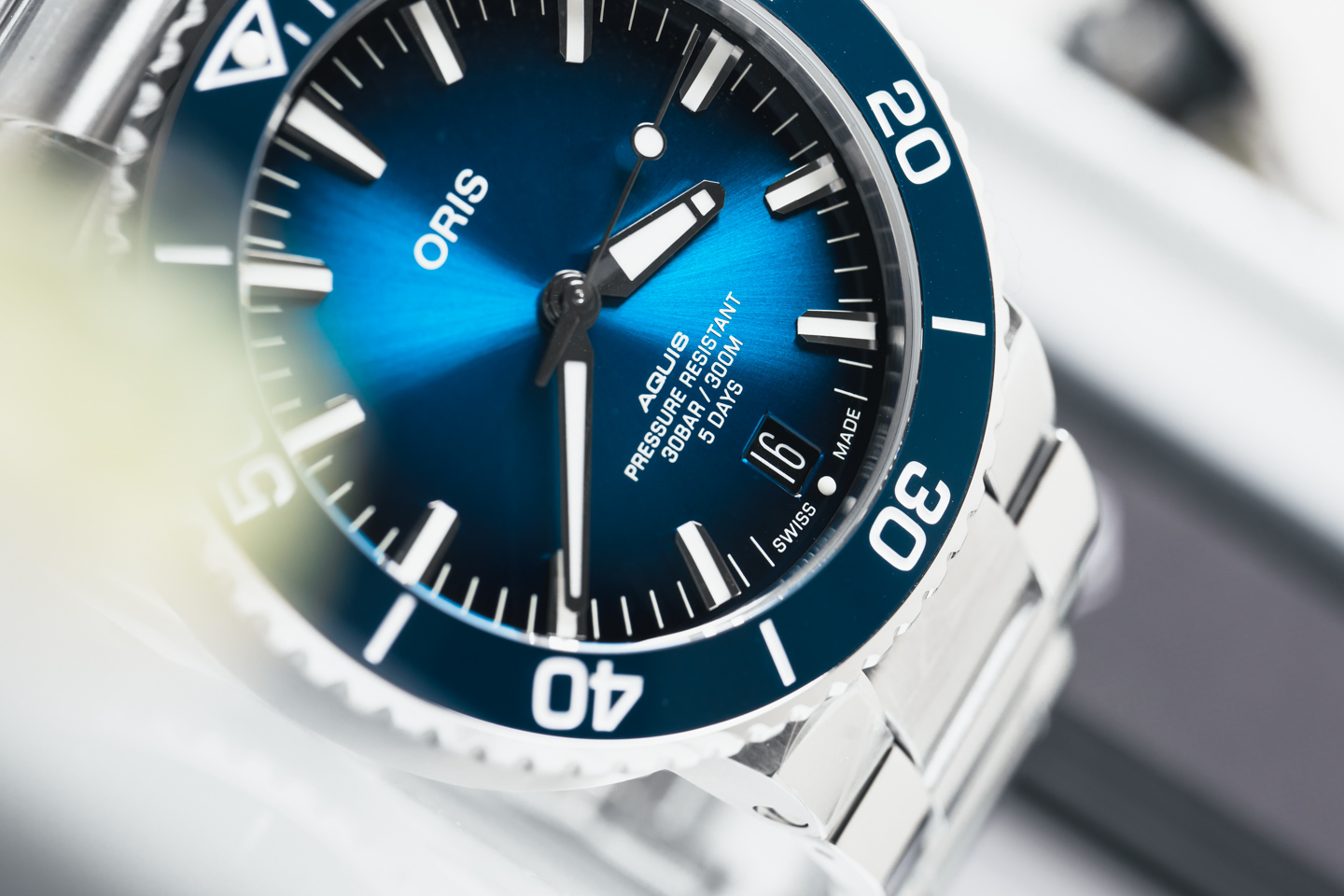 Like the case, the dial of the Oris Aquis Date Calibre 400 builds on existing Aquis designs rather than trying to differentiate the new movement with a radical reshaping. The oceanic blue sunburst dial surface is a staple of the Aquis line, as are the distinctive wide alpha hands and multifaceted applied indices. The only clue to the new powerplant within lies at 6 o’clock, with a diminutive line of text referencing the Calibre 400’s five-day power reserve. Also at 6 o’clock, the integration of the Aquis Date Calibre 400’s date window continues to be one of the highlights of the Aquis series, integrating smoothly into the dial design and preserving dial symmetry far better than a traditional 3 o’clock date window. 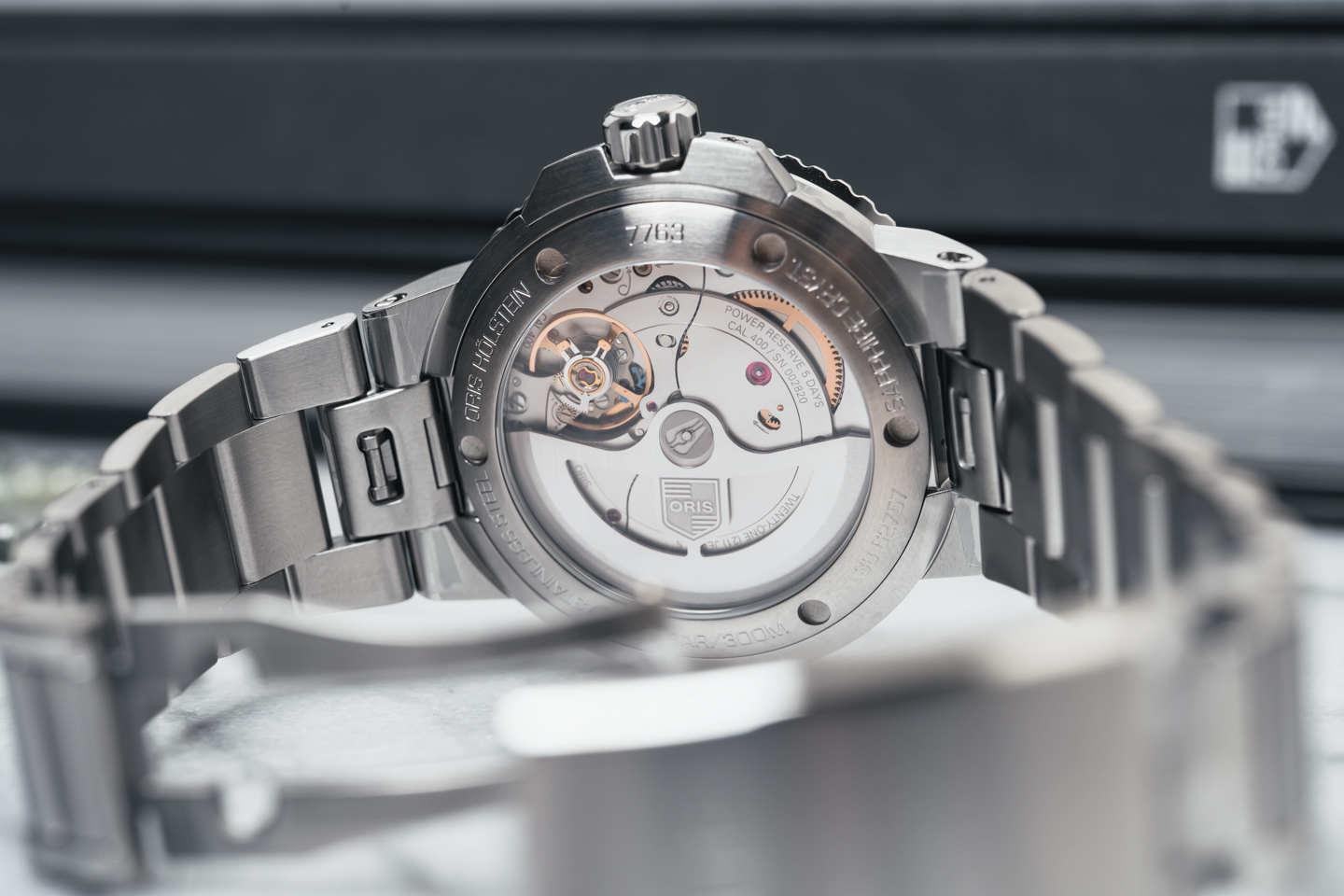 Of course, the manufacture Calibre 400 automatic movement is the most substantial update to the Oris Aquis Date Calibre 400. Eschewing the traditional Oris red winding rotor in favor of a sharply etched skeleton rotor in stainless steel. Finishing throughout the rest of the movement is simple but handsomely clean, while performance remains a standout for its price point with -3/+5 seconds per day accuracy, extremely high magnetic resistance, and a 120-hour power reserve at a 28,800 bph beat rate. 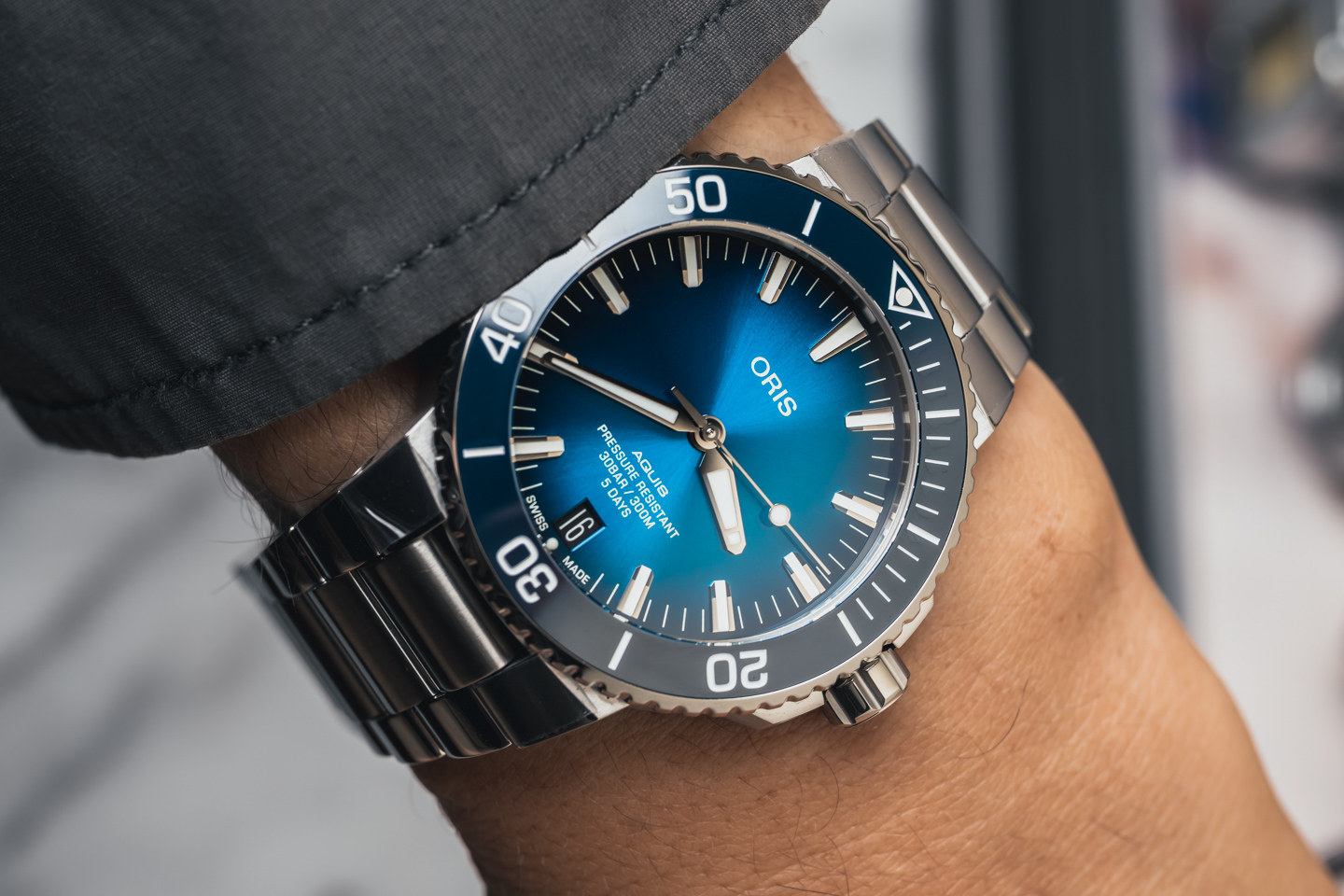 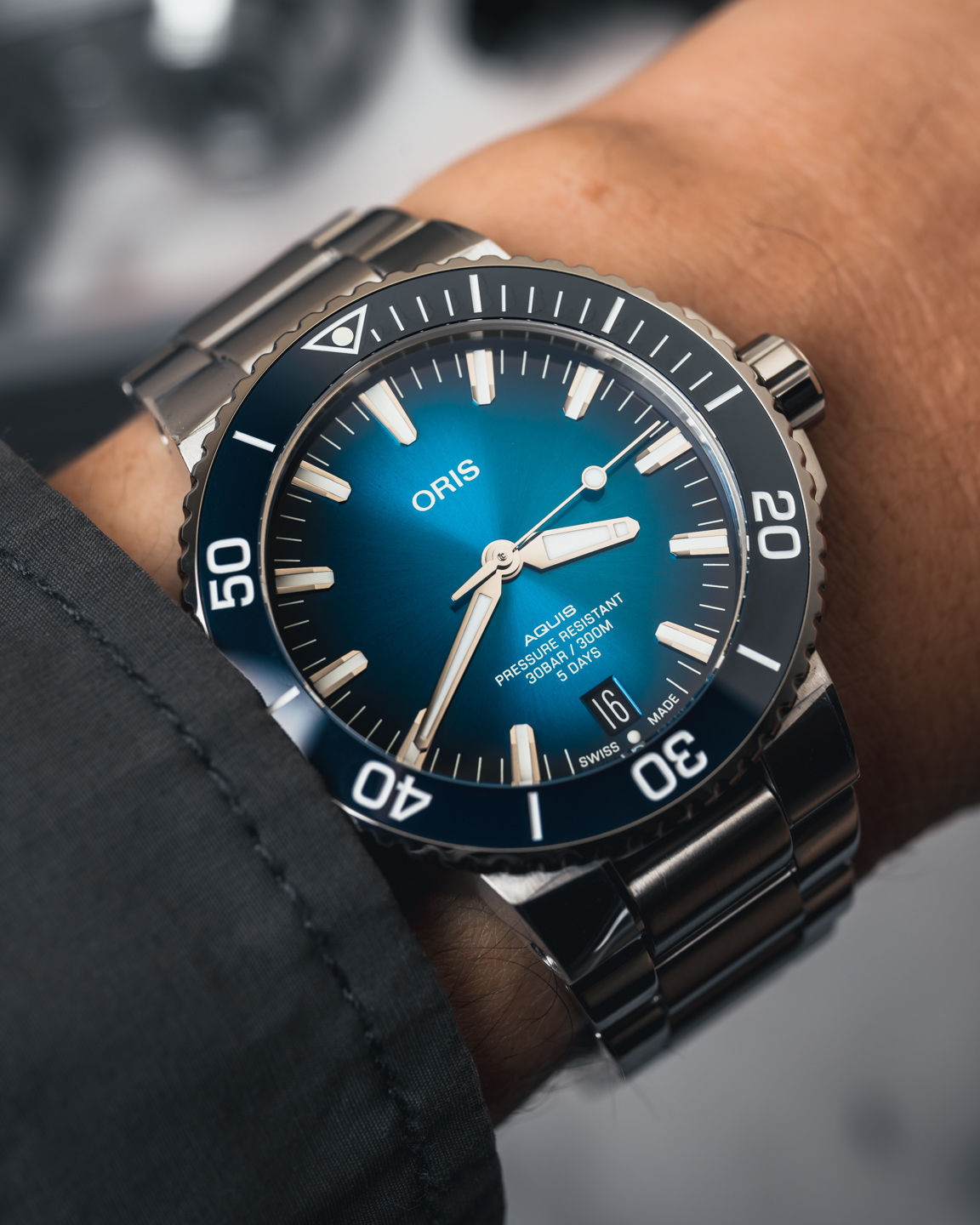 With the Aquis Date Calibre 400, Oris debuts its newest in-house movement as less of a revolutionary reshaping of its product line and more of a substantial upgrade to its existing designs, which already command a strong following among enthusiasts. The Oris Aquis Date Calibre 400 will be available through authorized dealers in November 2020, with a starting MSRP of $3,300. For more details, please visit the brand’s website.