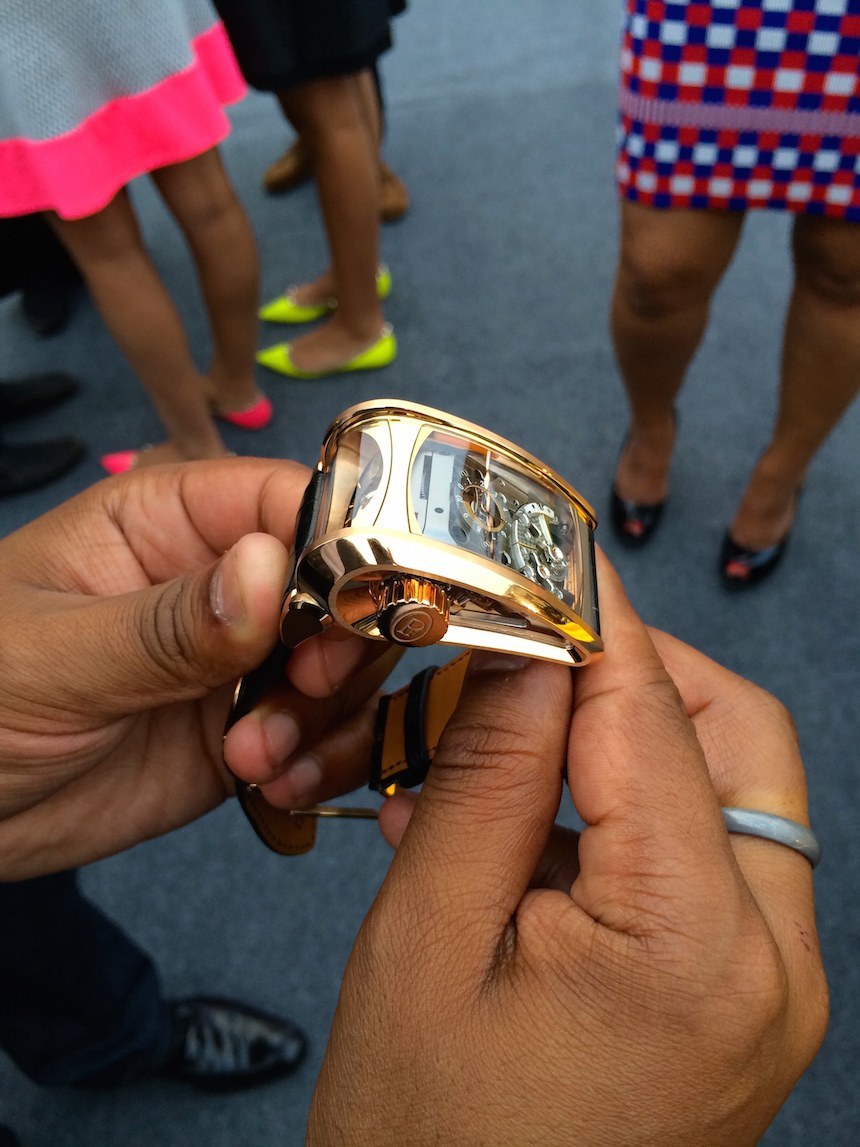 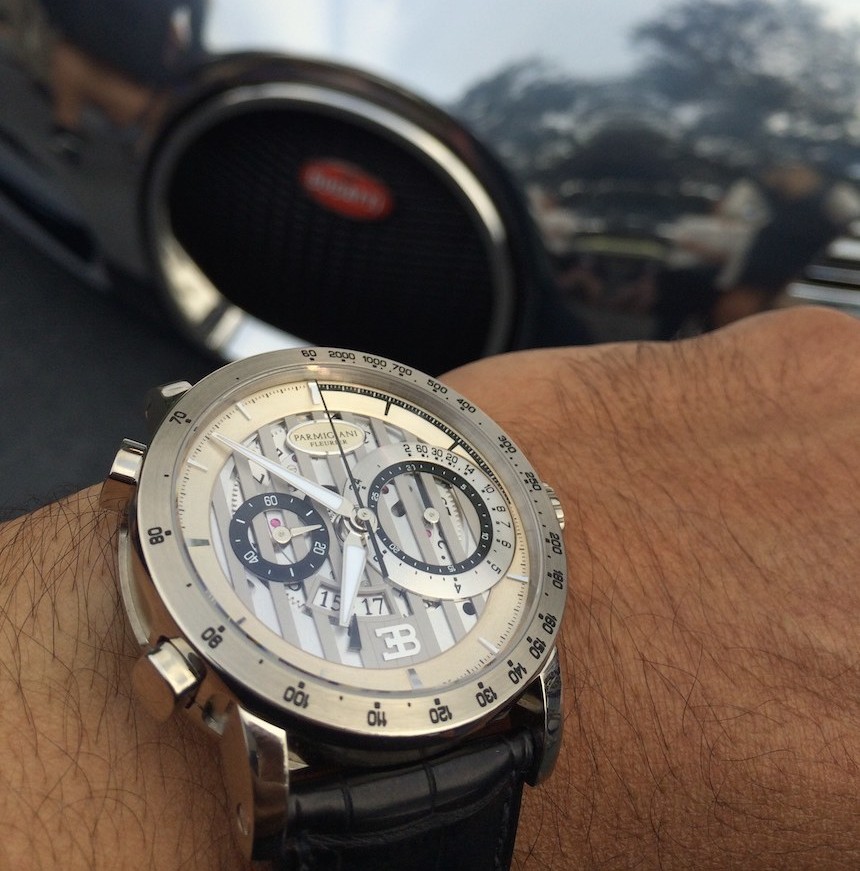 Every year, for one week, the beautiful Pebble Beach area is home to the most comprehensive and extravagant multi-show for car collectors and car enthusiasts on the planet: The Concours d’Elegance. What makes this super show special is that there is something for every car lover: from concept cars, to modern marvels, to the supercars, and the wonderful race cars of the past and present.

In 2014, Parmigiani Fleurier celebrated 10 years of partnership with the French (now German-owned) car manufacturer Bugatti, who makes some of the most coveted supercars in the world, most notably, the world record holder for fastest production car: The Bugatti Veyron. Since Pebble Beach is a short drive from where I live in Silicon Valley, I was more than happy to make the drive to spend a few days living the Bugatti and Parmigiani lifestyle, in what I found to be one of the most beautiful places in the world. 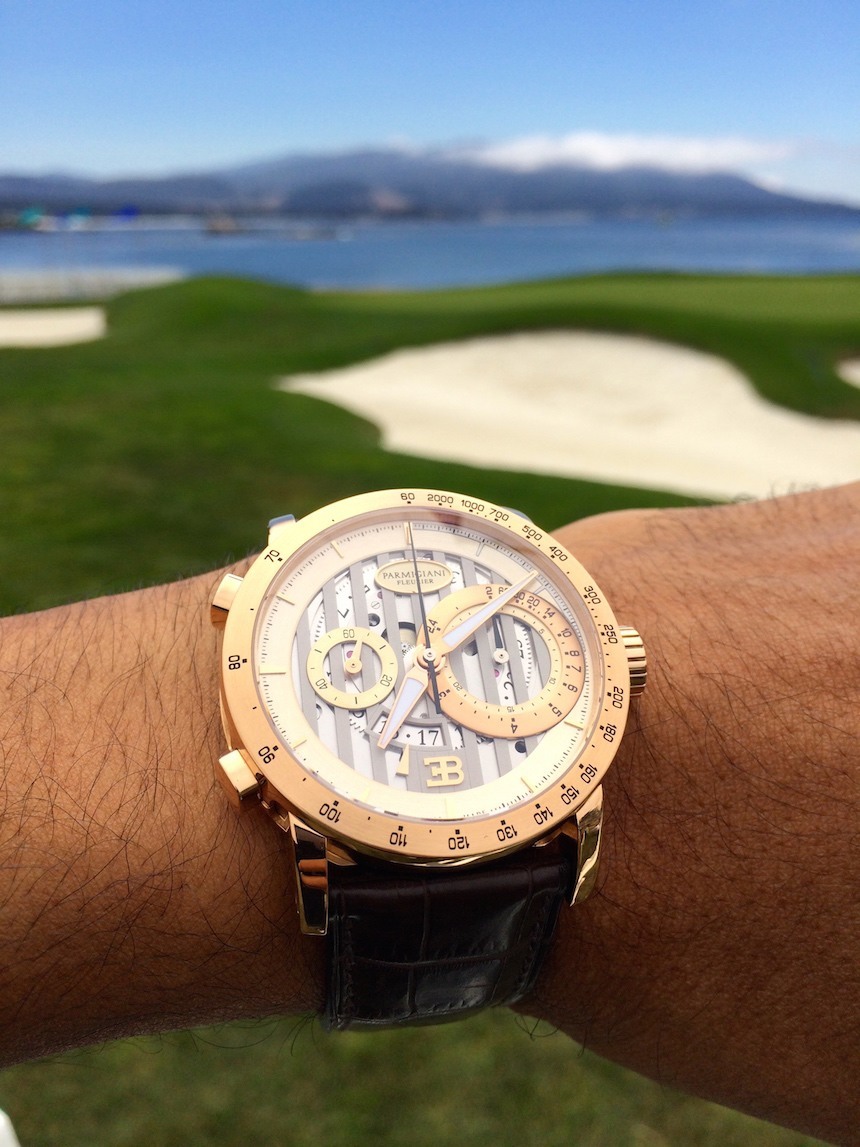 What follows here is a short report on this “dream” lifestyle from my experience at the Concours d’Elegance 2014 during that memorable weekend, as well as a first hand account of Veyron owners that I met and had a chance to talk to. Please note, however, that I am far from even being able to test drive a Veyron, let alone own one, so this is not a lifestyle I can really fathom, but over two days, while surreal, I was a part of it and will try to report about it from the perspective of Parmigiani and watch lovers alike. 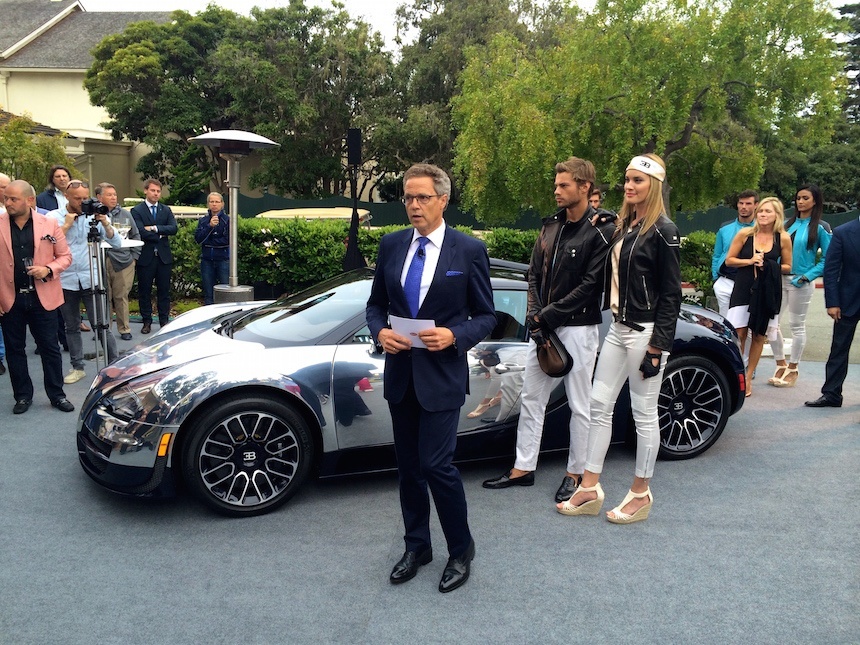 The company who makes the world’s fastest production car, the Veyron, has a long, interesting, yet broken, history in manufacturing the most coveted cars on the planet. Bugatti was started in 1909 by Etto Bugatti, an Italian immigrant with a strong sense of style and mechanical ingenuity to match. The company he founded in the Alsace region (now part of France) created in the 1920s, 30s, and 40s some of the most beautiful and fastest cars of the time. At the Concours d’Elegance, we were able to see one such example of Bugatti’s creation, the rare Type 57S electron torpedo from 1935, owned and driven by Jim Hull. 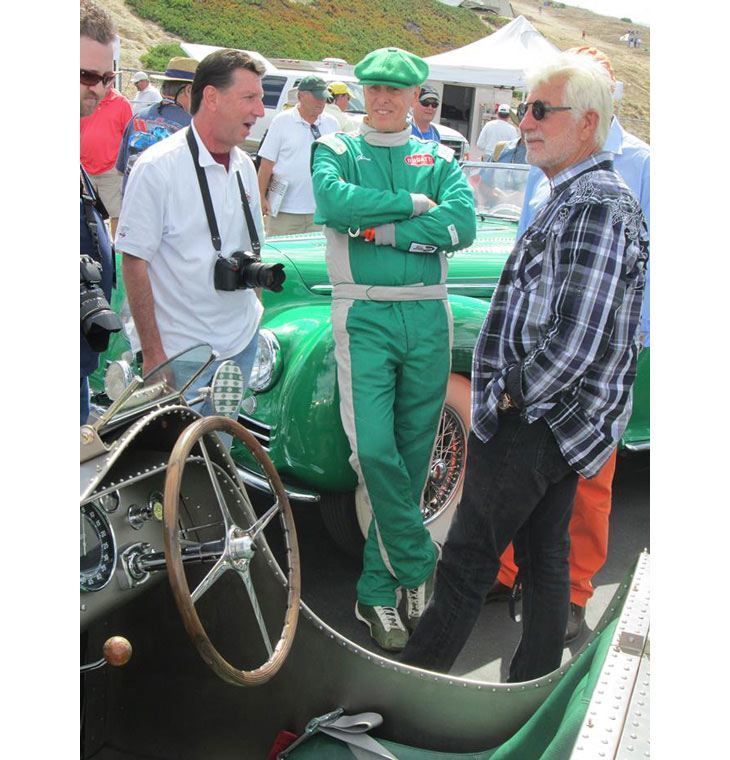 While the Bugatti automobiles created in the years between the wars were some of the most successful race cars of the time, few of them remain today, mainly due to low production and also due to the factory being mostly destroyed during the second great war. The Bugatti company itself survived, but never again reached the heights it knew in its earlier years.
Advertising Message

In 1998, the Volkswagen group bought the Bugatti name and relaunched the brand with a passion that Mr. Bugatti would surely be proud of. The first production model after the revival is nothing short of extraordinary; launched in 2005, the Bugatti Veyron was named by Top Gear the “car of the decade.” It still holds the world record as the fastest production car in the world (with the latest version running 267mph) while remaining, according to editors of Top Gear, a superbly drivable car.

And what is most incredible is that while the cars acceleration and top speed are legendary, it is fitted with carbon disk brakes that are equally impressive. Our James Stacey had the chance to go for a spin – luckily not in the literal sense – in the Bugatti Veyron Super Sport and has shared his experiences in a wonderful article you can read here.

After spending a weekend surrounded with such legendary mechanical muscles, I was constantly asking myself, why would one purchase a $2+ million dollar car? Even if you can afford it, what is the point? The responses I got from various Bugatti Veyron owners at the show were as diverse as they are interesting. One of them clearly bought it for the joy of owning one of the most exclusive cars on the planet, while another mentioned that the car was an investment, as its value had increased more than 30% since he purchased number 220 of the 300 cars to ever be manufactured. Another local owner, simply loves driving his car, as he also attested to me that while a monster lurks beneath the engine, the Bugatti Veyron is quite drivable, he drives his almost every day – though likely not too far. 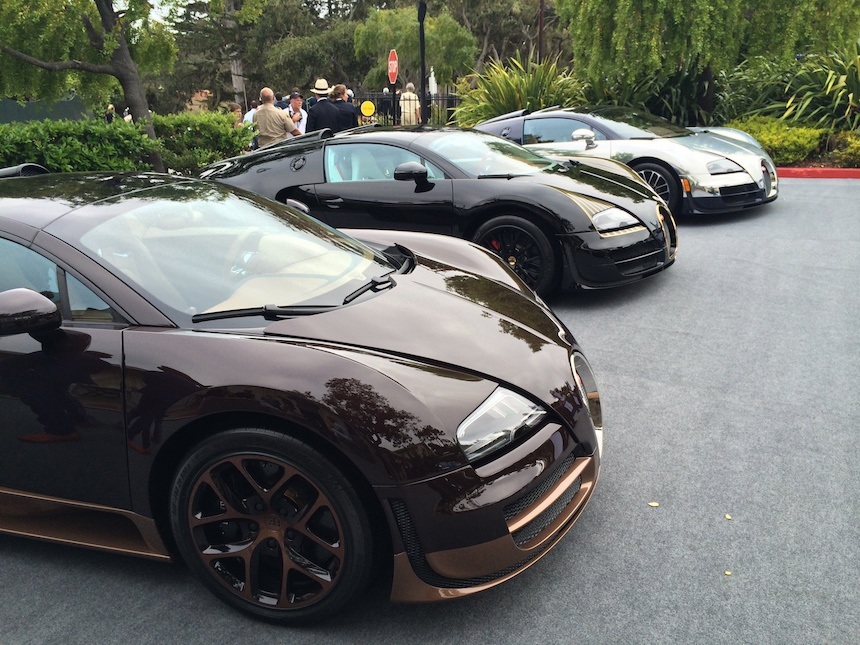 While the reason to purchase such an expensive and exclusive car may be varied and different, there is a constant, and it is that owning such a car and driving it is a lifestyle. You simply cannot drive such a car without sucking dry all the attention where ever you drive it. With only 300 (or so) Bugatti Veyrons ever produced, this is not a car you will likely encounter next time you pull up at your local WholeFoods market, unless you happen to live in the Pebble Beach or Malibu counties.

If owning a Bugatti Veyron is a lifestyle, how does one accessorizes oneself while driving it? If you are living this lifestyle you clearly are a connoisseur (or aspire to be) of the finer things in life. A typical Rolex Daytona for example, while the quintessential modern race car watch, cannot do. It is too common. This would be like driving a BMW M car. A fine automobile by all measures, but compared to a Buggati, it’s like flying coach vs flying a private jet. This is why Bugatti partnered with an exclusive and limited watch brand, whose history, corporate values, and technical prowess are closely aligned to Bugatti’s: Parmigiani Fleurier.

Like Bugatti, Parmigiani Fleurier is a contemporary luxury brand producing some of the most exclusive and advanced technical watches today. Both companies have a strong connection with a rich heritage. Bugatti with the cars of Mr. Etorre Bugatti’s time and Parmigiani with the rich restoration expertise that Michel Parmigiani brought with him when he started the brand in 1976 and collaborated in 1996 with the Sandoz family and their extensive collection of unique vintage timepieces.

It is no wonder that Parmigiani created the first inline 10-day power reserve watch to celebrate the two brands relationships and again this year released the Parmigiani Supersport version, pictured here above. The watches are designed as driving watches, which means that one can easily glimpse at the dial while firmly maintaining both hands on the Bugatti Veyron wheel and approaching the vertiginous speeds that it can easily attain. The Parmigiani Supersport is as exclusive as the Bugatti Veyron itself, only 30 pieces will ever be created and the price tag is $430,000. 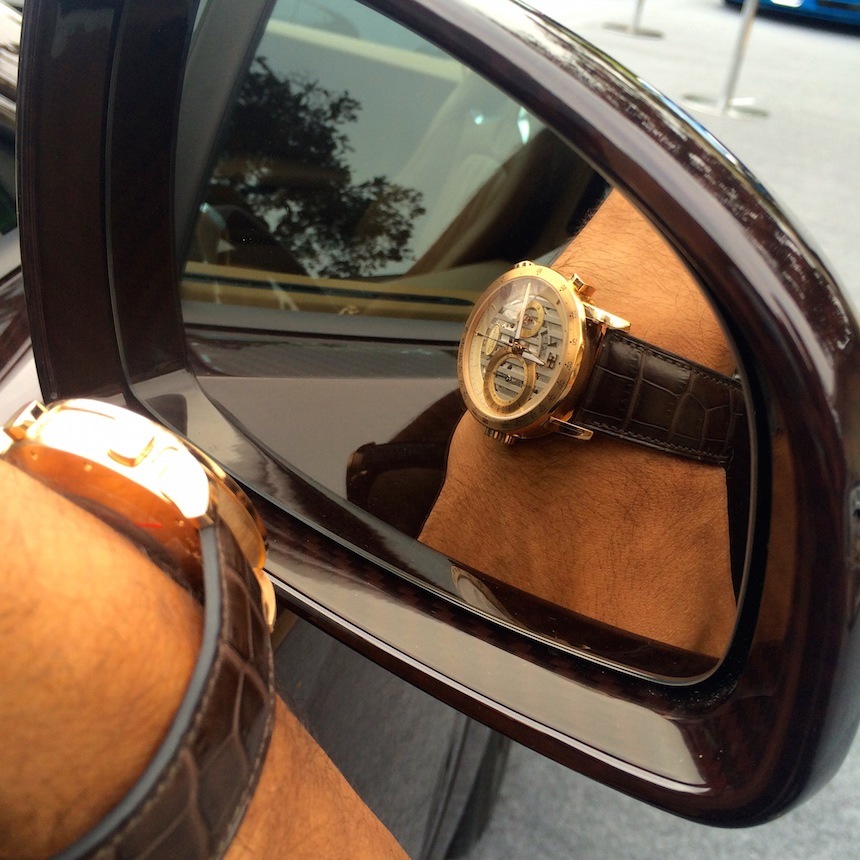 As perhaps an entry level Bugatti watch, which still contains Parmigiani’s deep expertise, consider the Bugatti Atalante flyback chronograph. At a relatively more affordable $53,000, this watch can be seen as a more classical race car watch. Coming in a rich rose gold or white gold with a unique Bugatti inspired skeleton dial, it houses an in-house flyback chronograph with pushers inverted to the right of the dial to facilitate operation while driving. The tachymeter around the dial should allow easy timing and average speed calculations at the track. 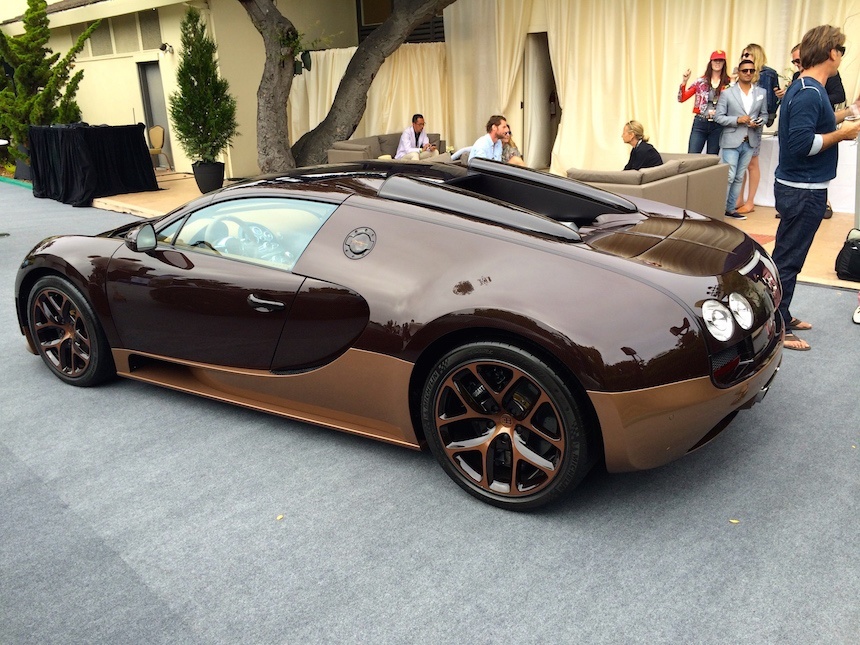 Sure, Bugatti and Parmigiani ownership is not for everyone. It’s a dream life for most of us. As I mentioned, owning such an exclusive car is a lifestyle, it says something about your sense of style, where you are in life, what you have accomplished, and what you appreciate. This is no different (except for the costs) in how owning a Volkswagen surfing van, or a Ford pickup truck, says something about what you value. It just so happens that the Buggati lifestyle is for an extreme minority. Knowing how to dress and complete this lifestyle is important, just like a surfer, or a golfer, or an outdoors enthusiast, it represents a sense of personal identity. So if you are one of the lucky few 300 Bugatti owners, or aspire to be one, wearing the correct watch, like a Parmigiani, will help you complete that lifestyle. parmigiani.ch