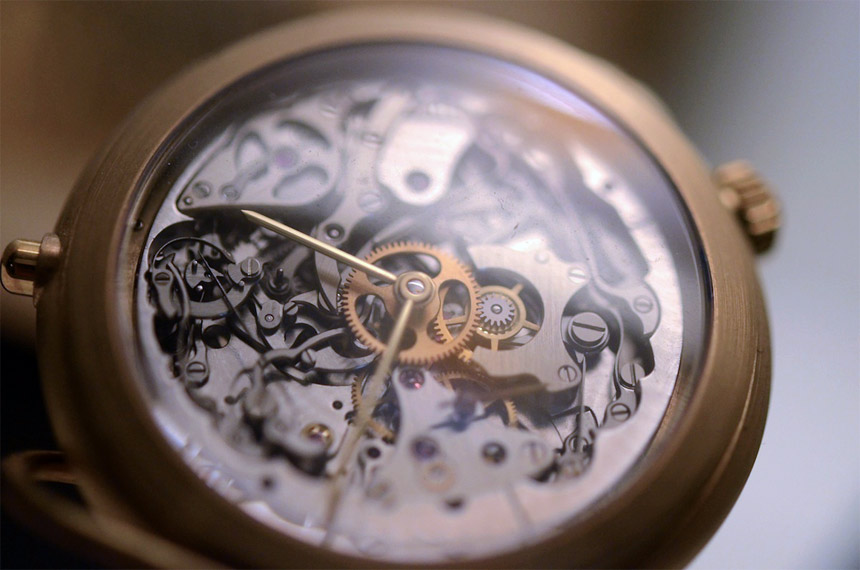 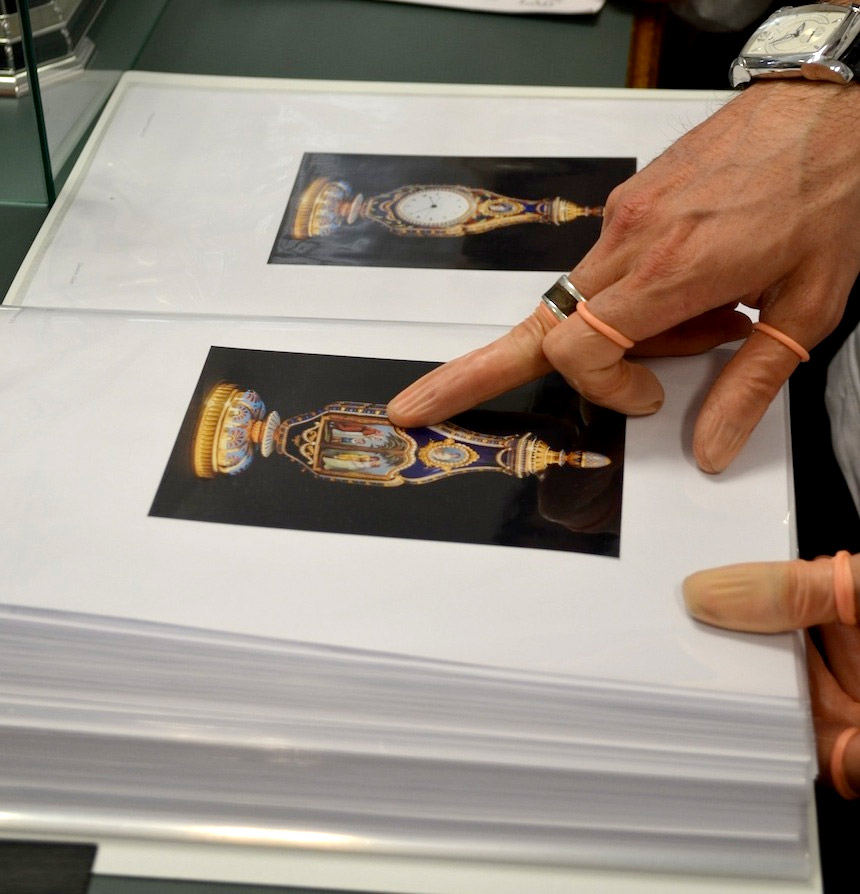 To begin with, Michel’s achievements in restoration were the foundation for the company. The Sandoz family was so impressed by his work that they wanted to offer support and help in expanding his workshop into a true watch manufacture. They managed to convince him, and with their financial support, the brand “Parmigiani Fleurier” was born in 1996. A lesser-known fact is that the company is still busy restoring automatons and timepieces that are some of the finest of their kind and are often several hundred years old. Two master restorers work simultaneously in the department, often working on the same piece for 6-12 months. We had the pleasure to meet one of them, Pascal, who showed us how they perform restorations.

In the image above, you can see a book that is about four-hundred-pages long and contains every bit of information available on the project’s subject. This particular book is dedicated to a mechanical perfume box with a clock. A book is created and dedicated exclusively to each restoration project piece. As Pascal told us, they always begin with studying the piece’s past. That includes searching for clues in museum archives and other literature, while documenting everything they learn. Becoming familiar with the era the item possibly originated from, is essential as it provides clues on how to begin dis-assembly. Following each book’s opening section about history, is the technical description of the item, serving as a reference on what it was like before they started working on it. Once restoration processes begin, they take pictures of every single part to record what it looked like before and after they restored it. Finally, after documenting all that, there is a detailed view on every step of the processes to show exactly how they modified parts and components.

In the present life of Parmigiani Fleurier, restoration plays an even more complex role than what I’ve just described: it also serves as a major source of inspiration. The motivation behind that is to create refreshing, modern works of high-end watch making, based on ingenious inventions and classic designs of the past. In the image above, you see the latest starting point for this fusion of antique and modern: the Oval pocket watch from 1800, a very interesting piece by English watch makers Vardon & Stedman. The main feature of the watch is that the telescopic hands follow the shape of the dial – in the video above you can see it in action! The timepiece was restored in the Parmigiani workshops in 1997 and now it serves as the inspiration for the Ovale Pantograph wristwatch. The result is a new, non-limited edition issued for 2013. Ariel wrote about it in detail here.

The idea to create a modern wristwatch version based on this two-centuries-old oval pocket watch and its telescopic hands, came from CEO Jean-Marc Jacot. The wonderful staff of the Research & Development offices showed us some of the artistic hand and computer -drawn designs that ultimately led to the final product. With this presentation we could sense the difficulties involved in such projects. First, there is the task to find which aesthetic and practical attributes of the antique item can be used for the new product. In the case of the oval pocket watch, that meant the modification and implementation of the telescopic hands and the oval shape. Secondly, it is the challenge of utilizing the historical item’s most important design elements in a way that enriches the company’s present portfolio, without upsetting its consistency. Finally, there’s the issue of keeping in-harmony with the ruling trends and market expectations. Any one of these required stages in the process should make it easy to see why there are so many steps in designing a successful product that meets all criteria. But, the efforts do pay off, as after years of careful engineering and prototyping,the result can be a bridge between ages-old and modern engineering.

This is where we should mention the most important connection: the one between the past and future of watch making. In other words, the know-how and expertise carried on by the latest generation of watch makers is much more substantial than that of the watch makers behind even the most brilliant antique piece ever acquired. Despite any and all state-of-the-art equipment (something we’ll look at in part two), ultimately, it is the dexterity of a highly trained craftsman that makes the realization of a functioning mechanical watch possible. Machines can be purchased, delivered and installed in almost no time, but finding a person who is capable of using those microscopic pieces to create a watch that is so much more than the sum of its parts… That’s the real challenge all true manufactures have to face.

In the Vaucher facility, part of Parmigiani Fleurier, we were shown the schoolroom where a handful of candidates are given the chance to become watch makers after four years of exhaustive training. To become a Master Watch Maker (one who gets to work on the highly complicated movements) is at least another decade more! To illustrate why so much time is necessary, let me show you the difference between what they are actually practicing with while at school and what they might become qualified to create in about another ten-year’s time.

On the left, is a picture I took of a watch that was on a student’s bench. On the right, is a tourbillon I photographed in the haute horlogerie workshop. Clearly, the differences are vast. The little watch was sealed and placed on that sheet of paper with its rate and other chronometric results, while some screwdrivers and other tools were laying around it on the table. On the other benches, we could see the same watches, or their partially finished movements, and other parts – all meticulously covered to be free of dust. Although the room was empty by the time we arrived, we could all feel that sense of urgency and impeccable care every student must have possessed while creating their own piece. I still believe that the person who created what we see on the left wouldn’t exchange his work for any other watch, as it is his own achievement.

If we concentrate on the similarities between the two watches, we can see them act as the bridge between an older, and the latest generation of craftsmen. At the moment, they each represent the ultimate challenge for their creator and require an equal amount of effort and attention. Considering the differences, there is something noteworthy as well. In their current states, they each imply just how long of a road is ahead for an aspiring watch maker! A road which had not only been much the same centuries ago for the builders of those amazing pieces in the Watch Museum, but shall also remain unchanged for the future generations of artisans. There are no shortcuts. The fact that there is no way around this, is probably one of the most arresting aspects of this mind-bogglingly difficult trade – and another reason to truly respect those few houses which not only harness, but also care to save and pass on that knowledge.

I hope you found this brief time travel from past-to-future interesting and that you will return for part two, in which I show you just what it takes to make a Parmigiani watch! We will check out the dial and case-making facilities, the Vaucher manufacture where they create a majority of the movement parts and do much of the finishing work, and we’ll also take a sneak peak into the Atelier Haute Horlogerie. There’s a lot you won’t want to miss, so look for part two… parmigiani.ch