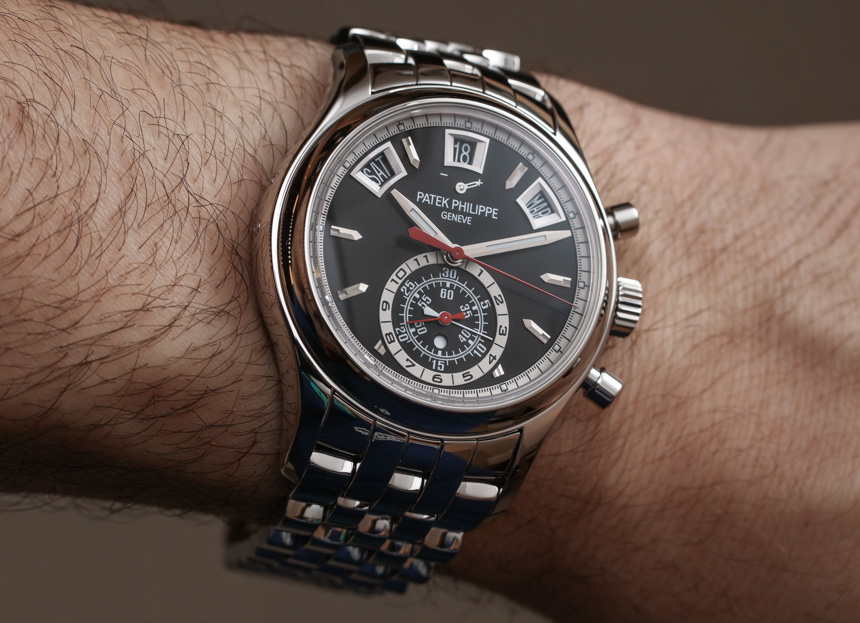 Back in 2014, Patek Philippe announced that the Chronograph Annual Calendar 5960 watch would be newly available in steel, in a move that makes sense for a brand that wants to appeal to a younger customer base in an already self-selective buyer’s market. Not particularly for pricing concerns, but precious metals make it pretty much impossible for a watch to feel “sporty” in any way, let alone such a complicated watch like the 5960. In 2017, they released this, the Patek Philippe 5960/1A Annual Calendar Chronograph watch with a black dial. The result is the natural progression of what the brand intended with their desire to capture a younger market, and in my opinion it’s an aesthetic improvement and refinement. 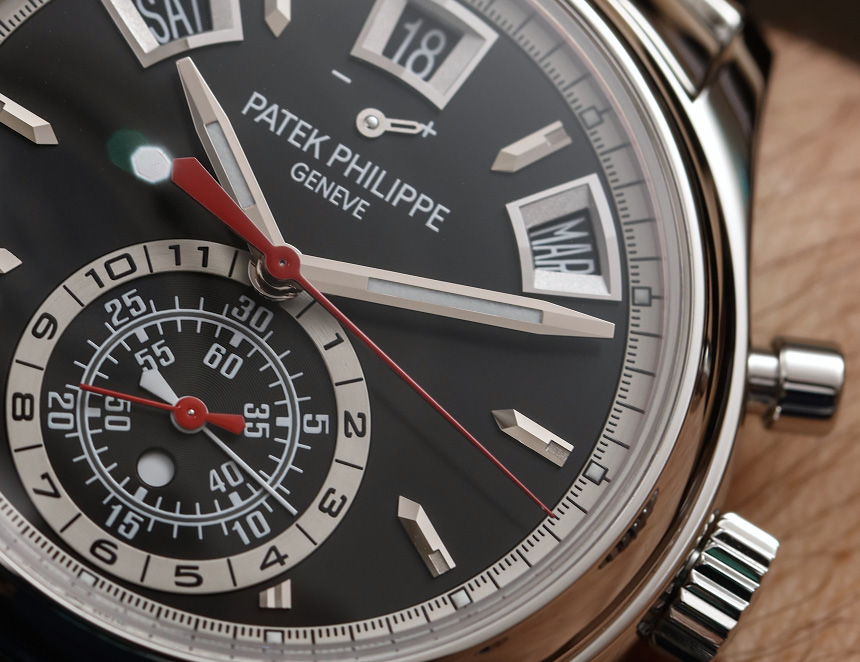 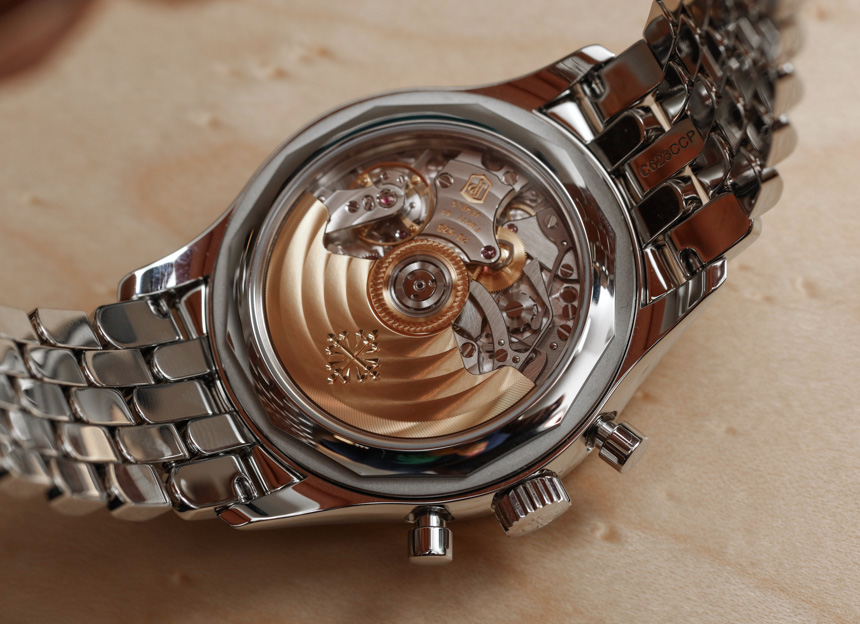 The original 5960, released in 2006 was the first in-house chronograph produced by Patek so it’s not surprising that the brand would want to make sure they get these steel iterations just right in that it pleases collectors, enthusiasts, and of course, aspirational watch fans. The opaline/silver dial with black and red touches was a success but I don’t think I’m alone in preferring the newer black dial watch. Sporty, modern, and carrying an undoubtedly impressive movement, Patek has successfully created a lust worthy piece here for those of us who respect tradition without being burdened by the weight of dusty and unchanging style. 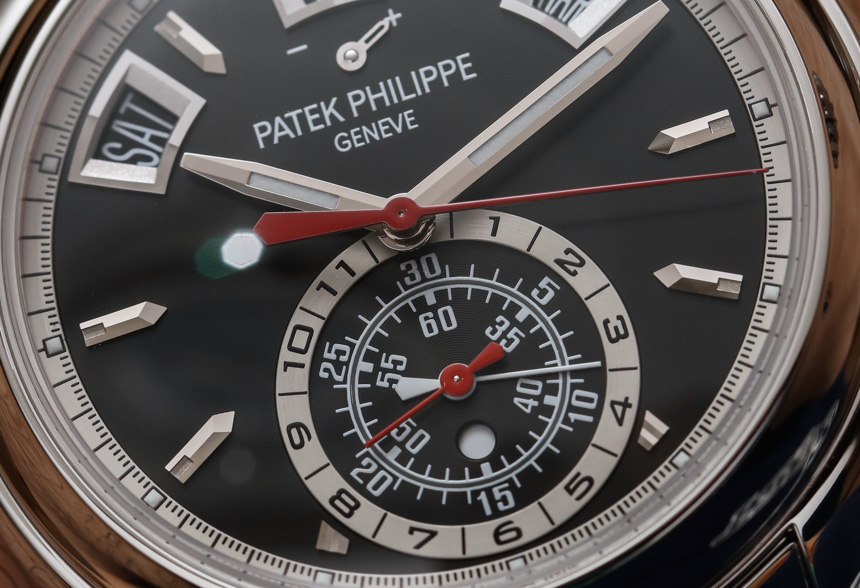 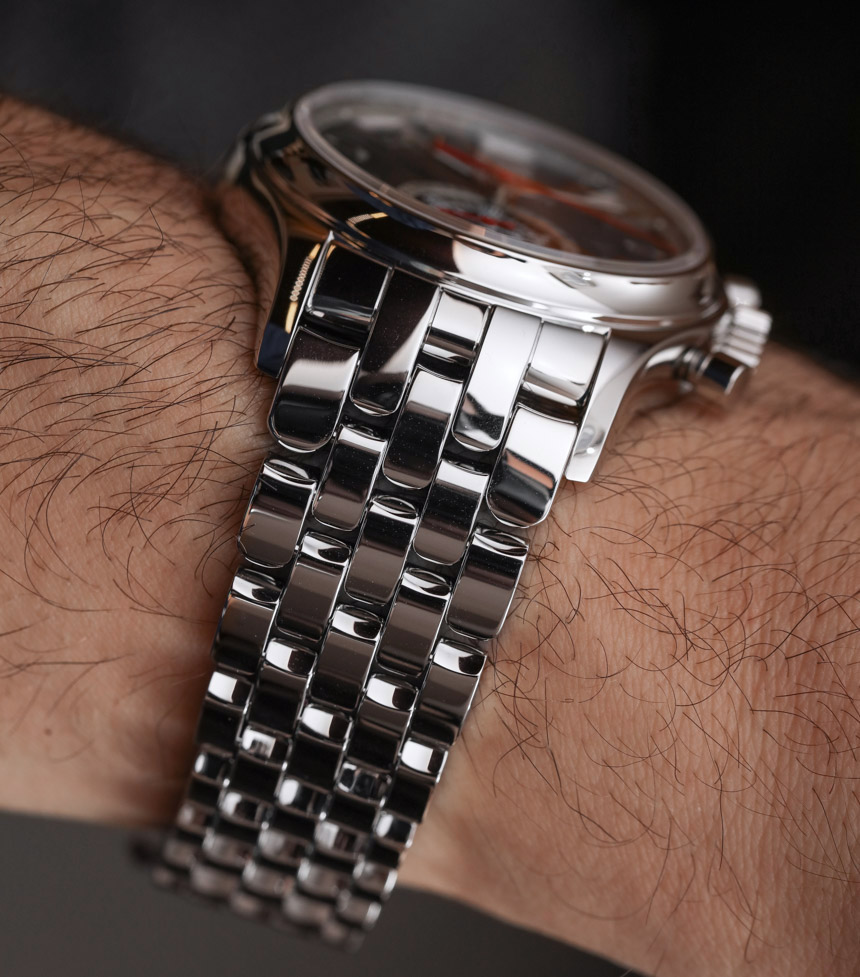 The 40.5mm wide and 13.5mm thick polished stainless steel case houses the deep ebony black opaline dial that is fortunately legible as well as attractive. The applied white gold hour markers, red seconds and chronograph hands, and white aspects of the monocounter at 6 o’clock keep the dial from being overwhelming considering how much is going on with the Patek Philippe 5960/1A. 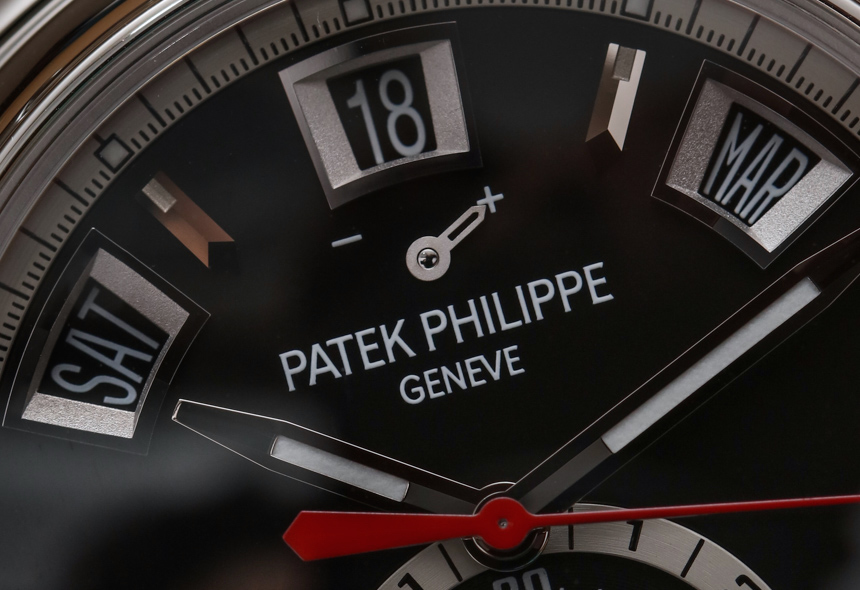 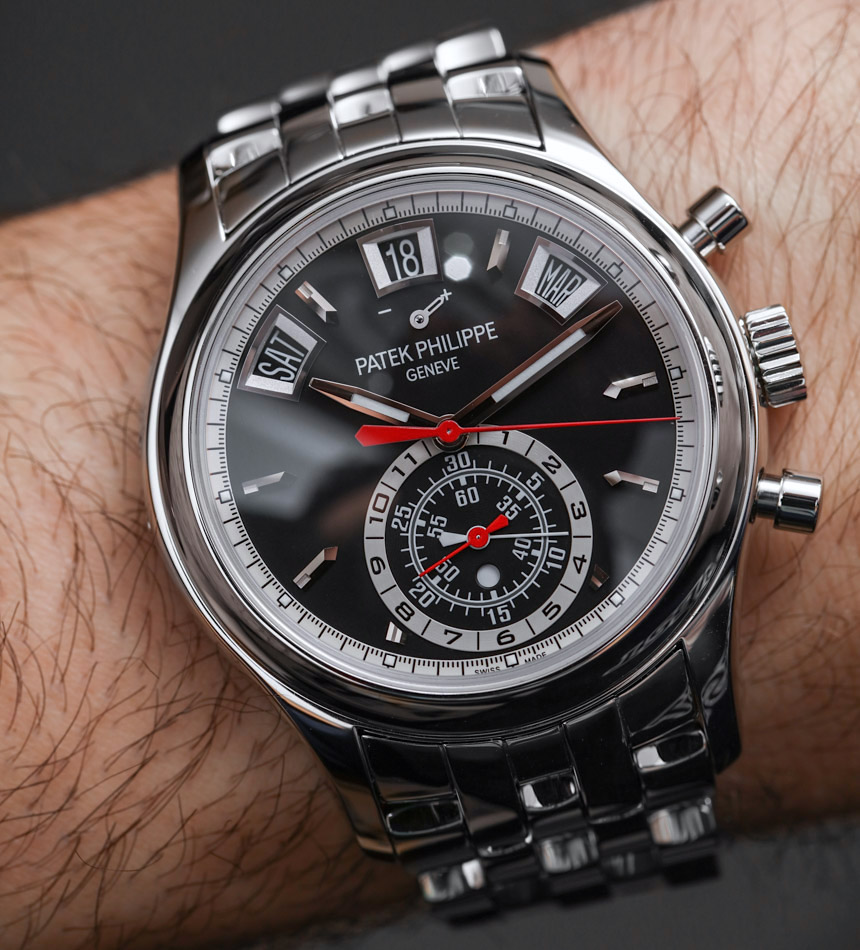 Things are flipped around from the silver dialed model, with the date/day/month apertures, hour markers, and outer ring of the monopusher contrasting against the black dial and looking a lot more harmonious. Personally, I felt the black framing of the date/day/month apertures on the previous model looked too stark. I think the best way I can put it is that they almost felt like black eyes on the face of the dial, though that might sound a little harsher than I intend. These apertures look more like a pair of glasses that look like a natural fit and attractively frame one’s face. The power reserve indicator right at 12 o’clock still bothers me and just looks awkward, though the functional purpose of the complication is hard to deny. And of course, the white outer ring of the monocounter indicates the chronograph hours, with the inner rings indicating the chronograph minutes. 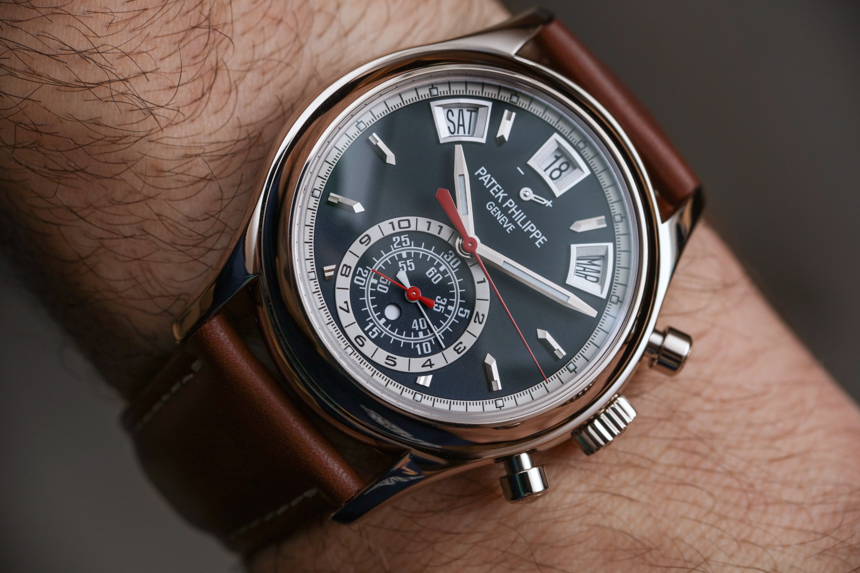 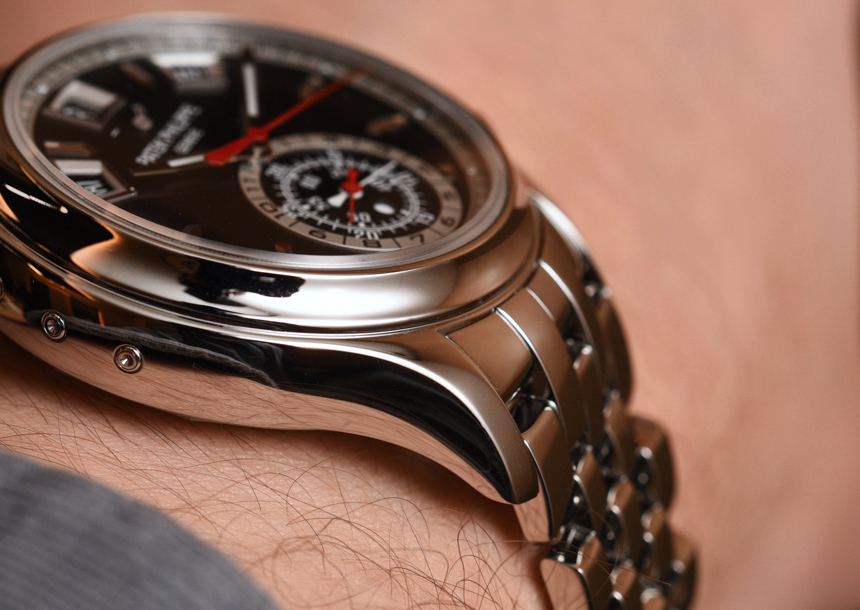 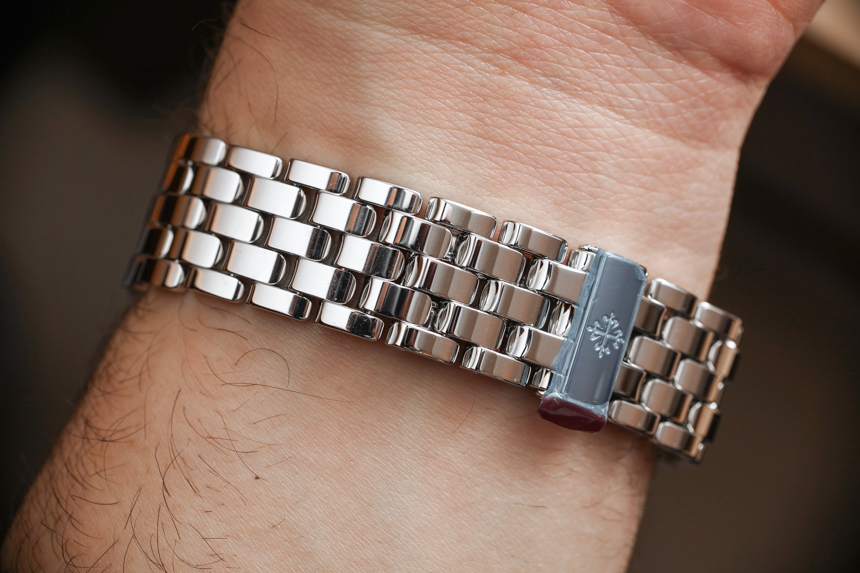 Something I have to add is the fact that I’m usually not the biggest fan of five-link bracelets, and this preference remains unchanged here. Above you can see the white gold and blue dial 5960, which I actually quite like on the leather strap, but the bracelet on the steel model is just not doing it for me. It is done as refined and as well as one can be, though, and the way the curving lugs hug the wrist in a way that the five-link bracelet does appears to be the natural fit for the watch. 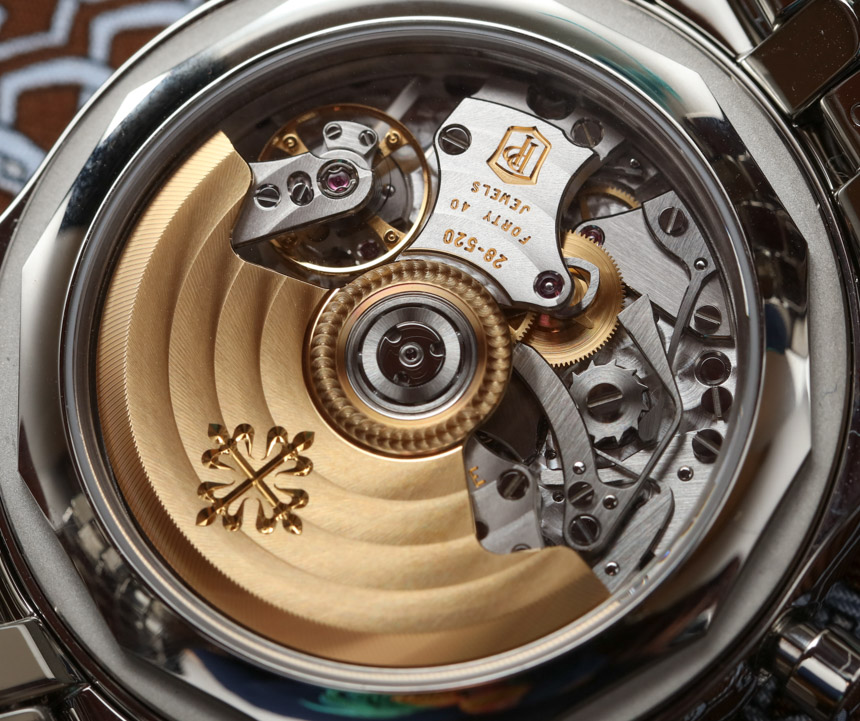 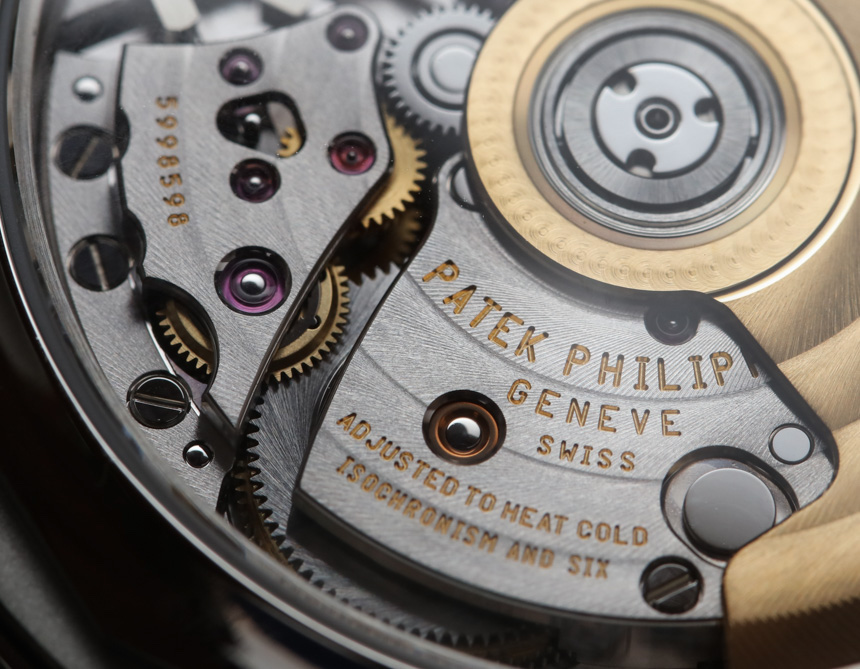 Seen from the caseback and adorned with a 21k gold rotor with the Patek Philippe seal, the in-house 28-520 IRM QA 24H movement is a mouthful, but a very impressive and significant one at that. Our David Bredan went into the movement when the previous steel model was introduced and I’ll repeat his summary of the movement here below:

“The movement inside (and take a deep breath now) is the completely in-house manufactured CH 28-520 IRM QA 24. That translated into watch-terminology means that the movement comprises a flyback chronograph, an annual calendar, a power-reserve indication (for what the brand notes as anything between 45 and 55 hours, likely depending on for how long the chronograph is in operation), and also a day-night indication. Its base movement contains 302 components, while the clever (and only 2.48 mm thick) annual calendar module adds another 154 parts to that. And while we often discuss perpetual calendars–calendars which require absolutely no adjustments until the year 2100–annual calendars mean a smart transition between them and the classical calendars.” 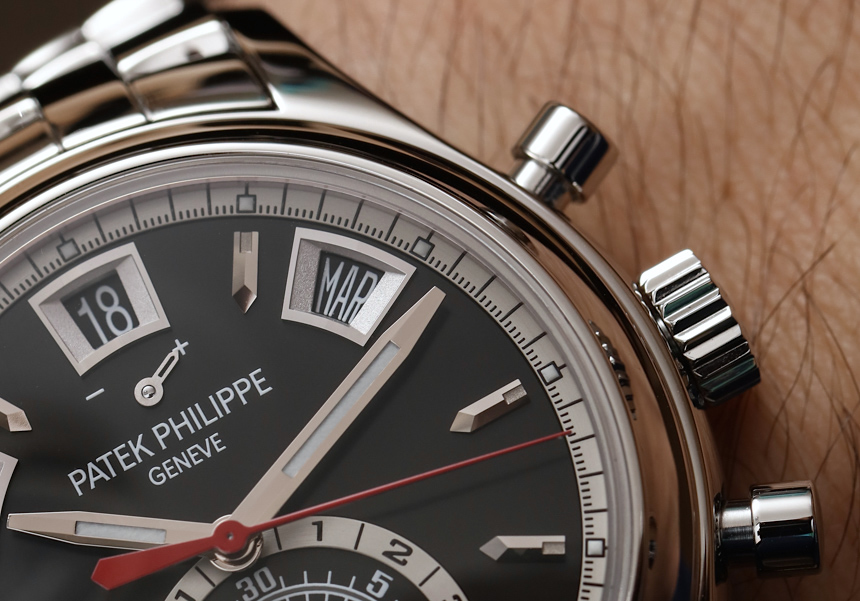 Price for the Patek Philippe 5960/1A Annual Calendar Chronograph in steel with black dial is unchanged at 45,000 CHF, which is just a hair over the same amount in US dollars. Considering this is the newer model, I haven’t seen many out there (although there are several white dial models available on the resale market). Time will tell if one or the other holds value better, but it will be interesting to see what Patek unveils next with their new products geared towards the younger market. patek.com