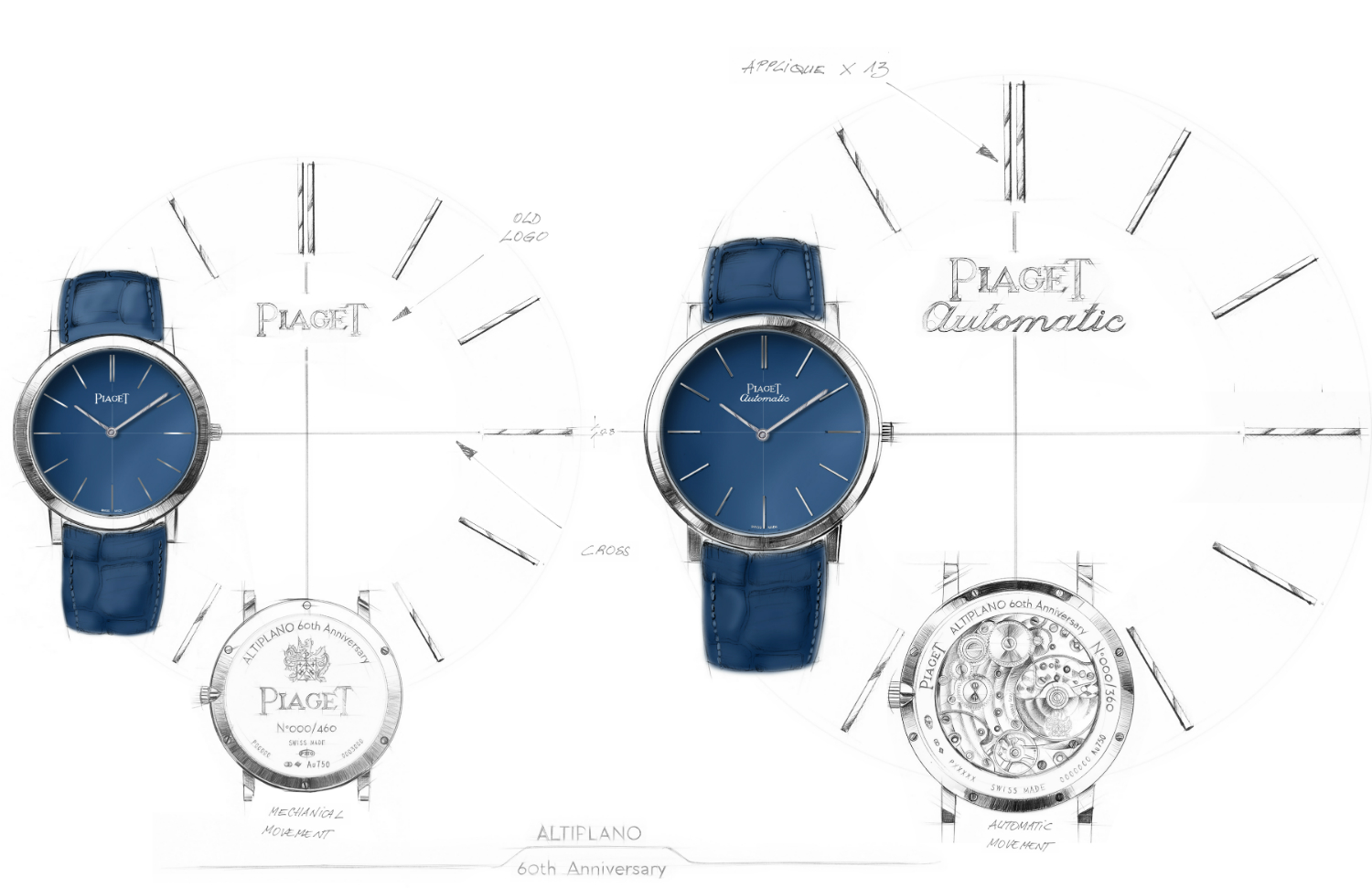 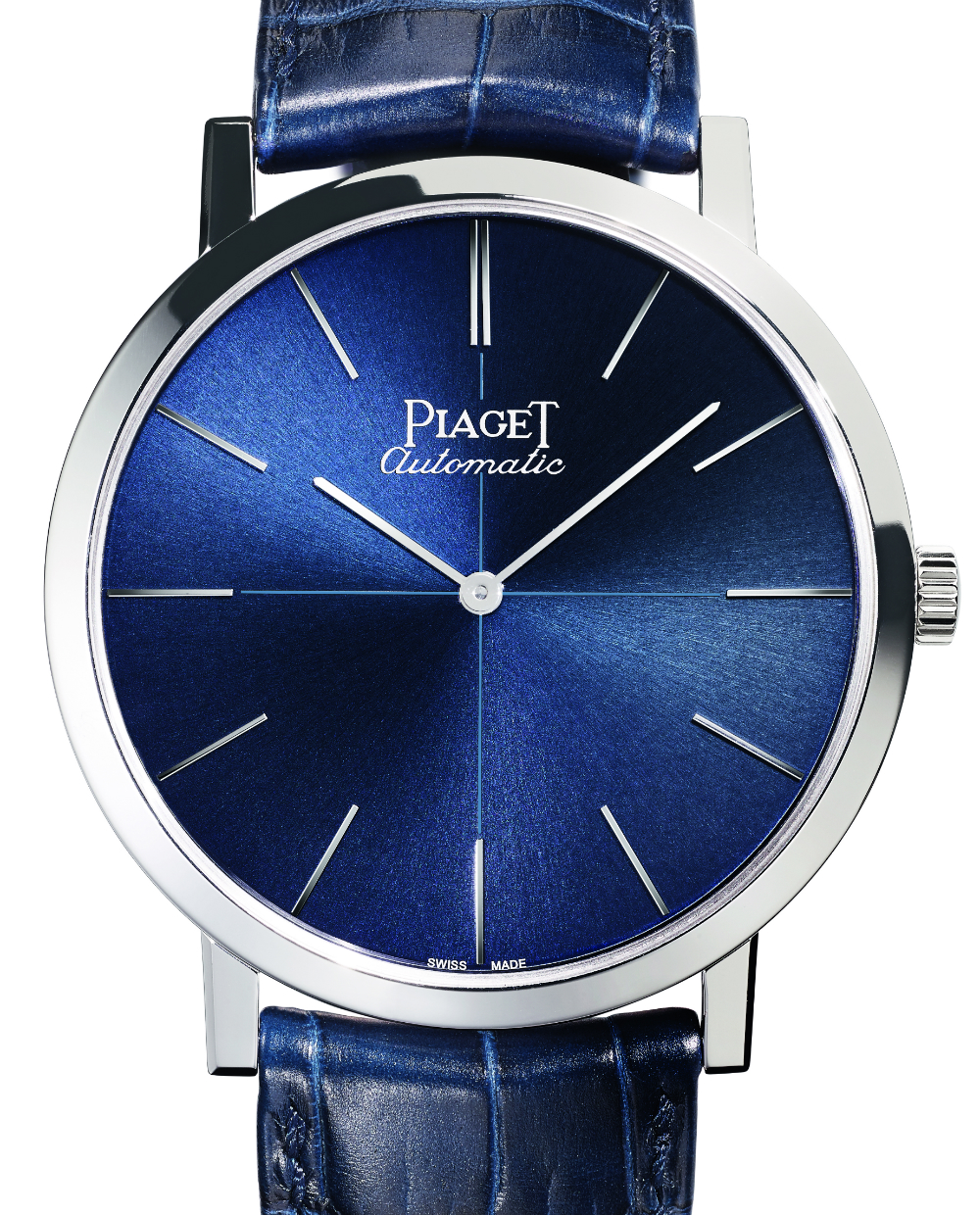 With a rich history and a reputation for manufacturing svelte, elegant watches, Piaget stands out as a brand with true style. From ultra-thin skeletonized timepieces to their legendary 9P movement, they continue to maintain a dedicated following while mastering the art of highly engineered movements and slender case design. Piaget will be dedicating 2017 to the Piaget Altiplano in order to celebrate the 60th anniversary of the original launch. Piaget fans will be happy to hear that the brand will be commemorating this anniversary by releasing a limited set of Piaget Altiplano 60th Anniversary watches – an automatic 43 mm and manually wound 38 mm. These watches truly showcase the brand’s expertise and stay true to their record-breaking designs. 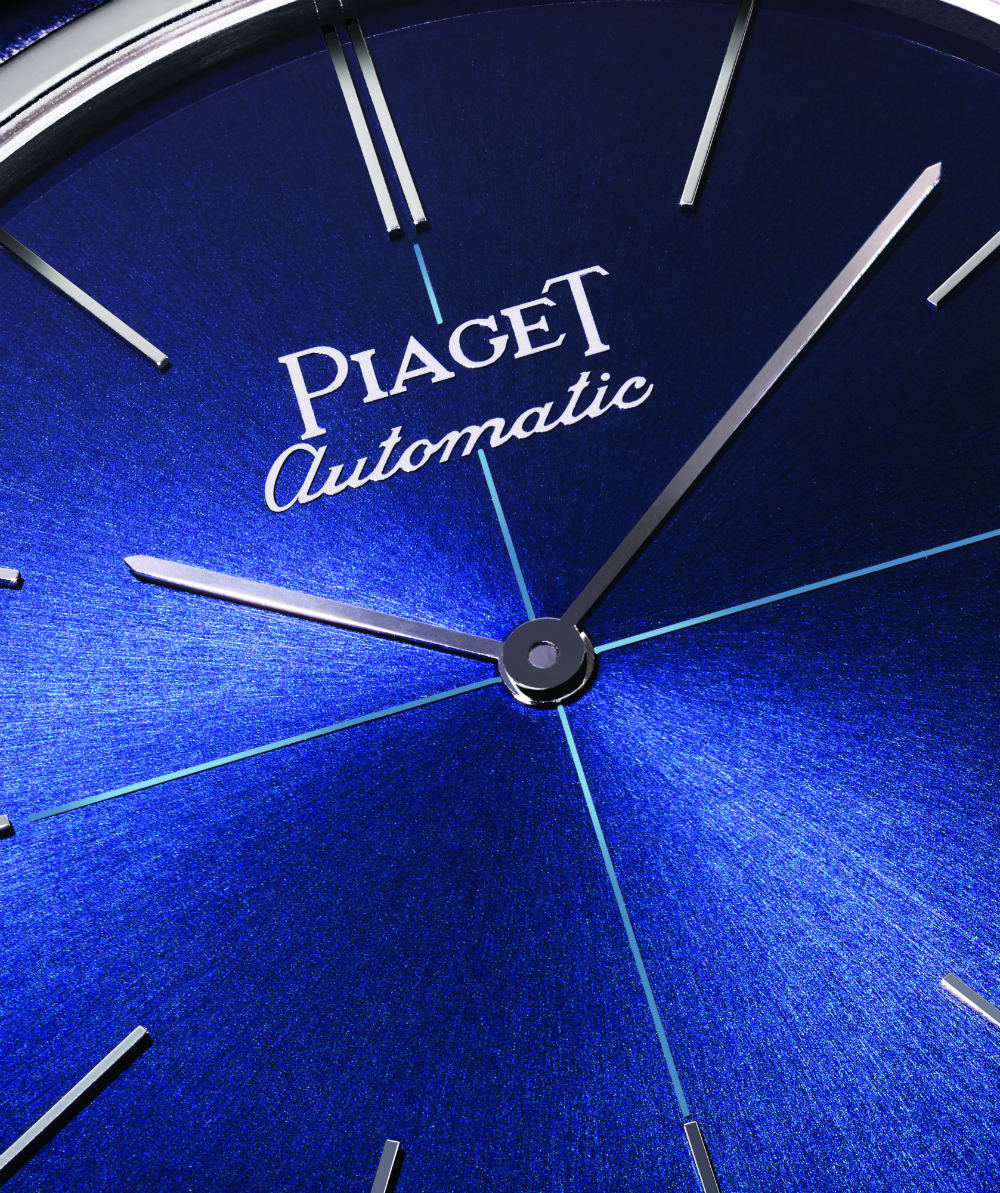 With the release of the Piaget Altiplano 60th Anniversary watches, Piaget intends on revisiting an immortalized design and adapting it to contemporary tastes. Naturally, the 43 mm version (G0A42105) is perhaps the most impressive, as it blends the classic Piaget form factor with the convenience of a modern day automatic. The large case, in spite of its automatic Piaget Manufacture 1200P movement, retains a remarkably thin case height thanks to the 2.35 mm movement thickness. While both models feature a sapphire case back, it’s the beautifully finished, off centered micro-rotor with the Piaget coat-of-arms that really makes it that much more special to observe up close. Power reserve is approximately 44 hours and the movement is finished with a variety of details including circular Côtes de Genève, a circular-grained mainplate, bevelled bridges, and more. 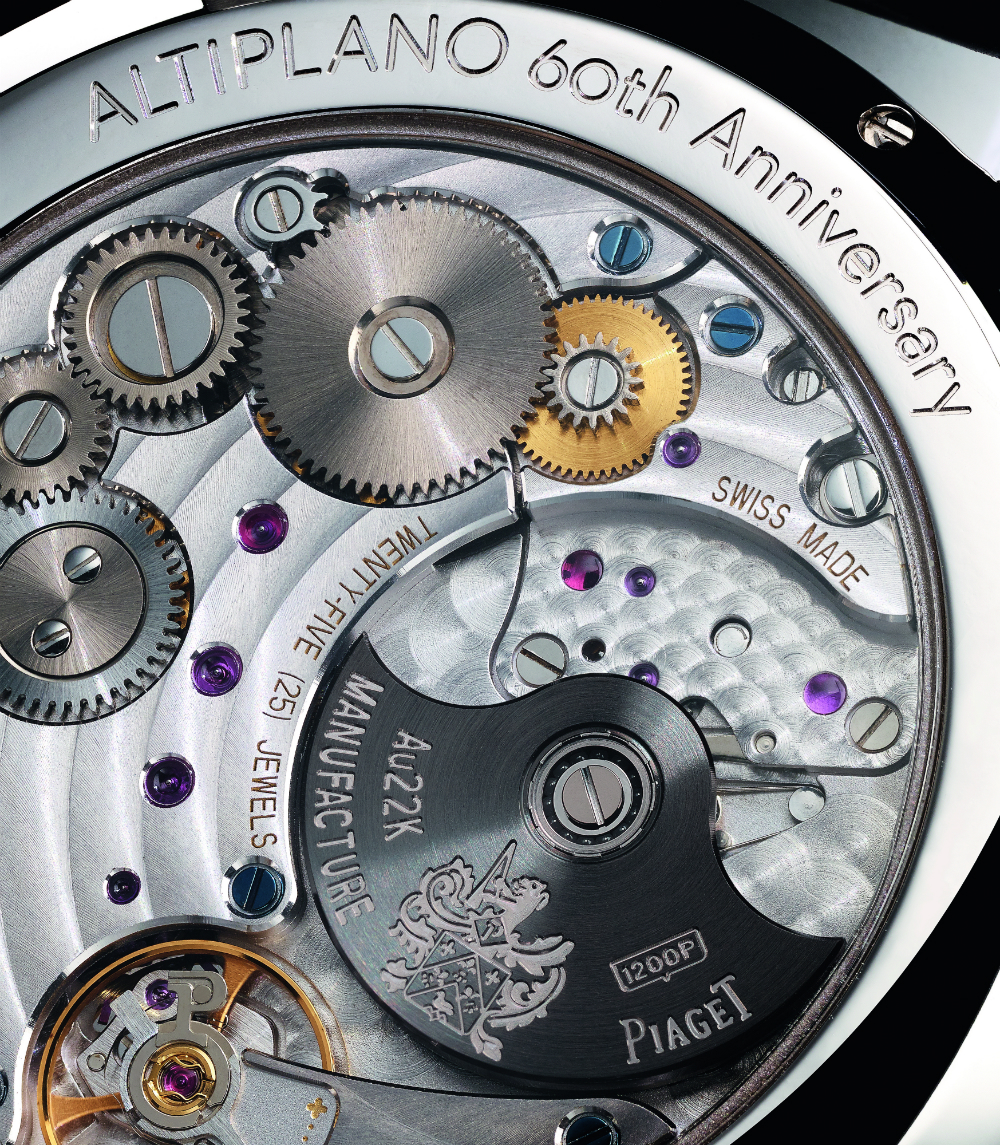 The Piaget Altiplano 38 mm model (G0A42107) is distinctly and proudly fitted with the Calibre 430P. At just 2.1 mm thick, it carries on the heritage of the legendary 9P movement that made its debut in 1957. It’s these kinds of manually wound movements that really established Piaget as the leader in the world of ultimate thinness. With a power reserve of 43 hours, this version just screams purity and stands effortlessly among its ancestors as a fitting and deserving tribute to decades of Piaget innovation.

Both the 38 mm and 43 mm versions of the Piaget Altiplano 60th Anniversary watches feature deep blue dials with white gold indexes and a center cross. The slender baton-type hands add a playful touch of minimalism and refinement while fitting with the overall design of the dial. To match the blue dial and white gold cases, Piaget pairs the watches with a blue alligator leather strap that seems to integrate perfectly with the lugs, which is crucial to maintaining the experience of the ultra-thin design and wearability. 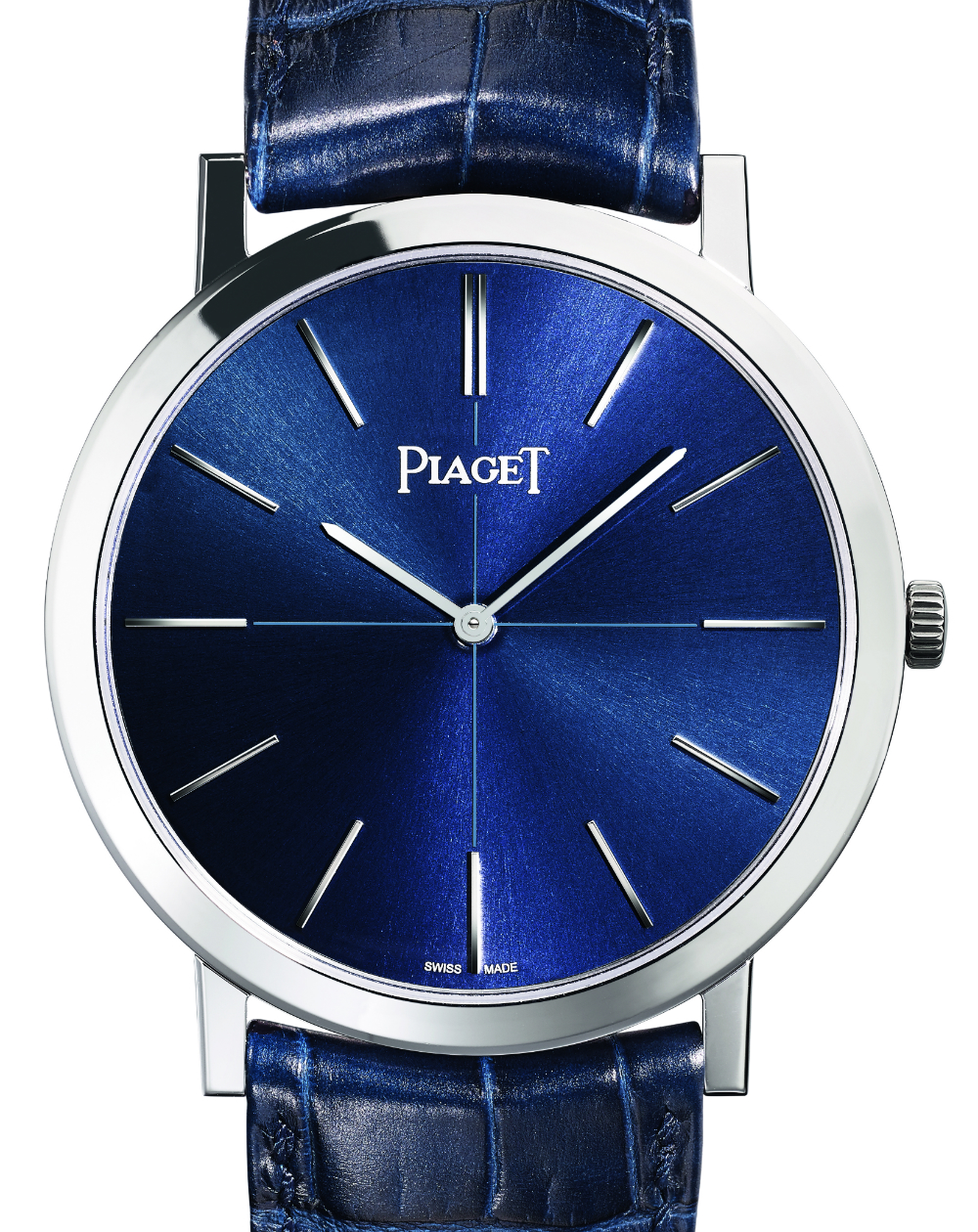 Both of these models are undeniably “Piaget” and it’s exciting to see the brand put so much dedication into a run of watches that represents such a huge part of their history. As mentioned previously, both the Piaget Altiplano self-winding 43 mm (G0A42105) and Piaget Altiplano manual-winding 38 mm (G0A42107) models will be limited releases. The self-winding model will be produced in a series of 360 pieces while the manually wound version is limited to 460 pieces. The 38 mm model is priced at $17,900  and the 43 mm model is priced at $23,900. piaget.com