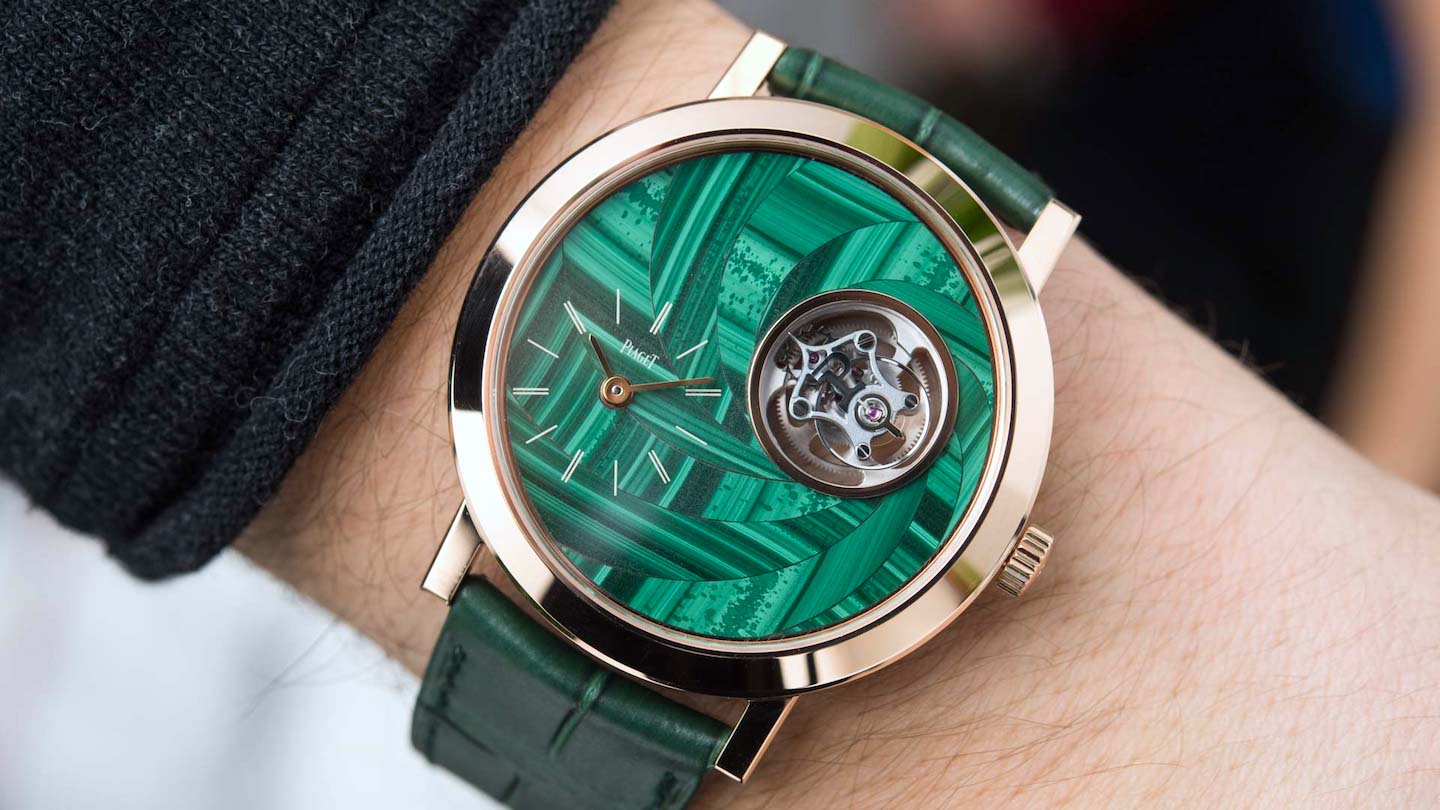 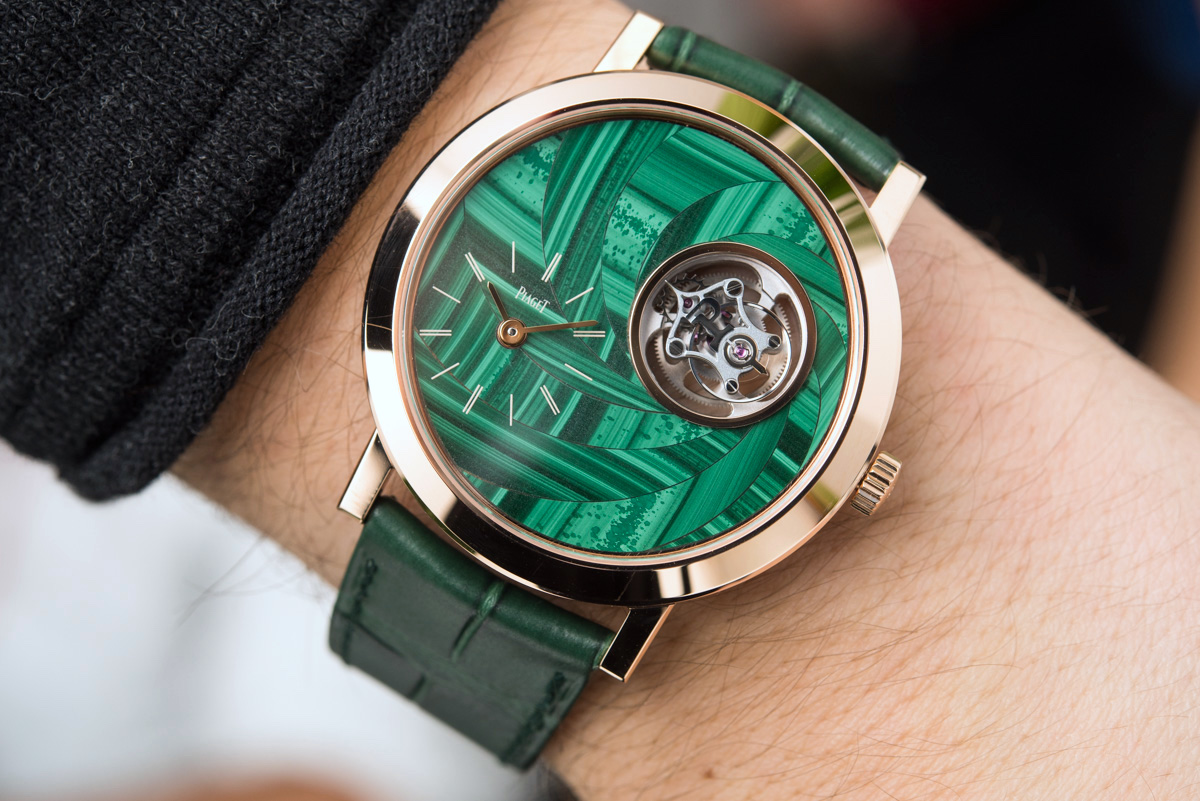 All this masterful play with stone marquetry would not have been possible to present in such a sleek form without Piaget’s ultra-thin calibers. Interestingly, the avenue of stone marquetry opened in 1957 for Piaget thanks to its launch of the 9P movement family that was just 2mm thick. This left a lot more room in the case for thicker dials and hence they could begin experimenting with stone marquetry. By 1963 more than 30 different types of stones found their place in Piaget’s collections. 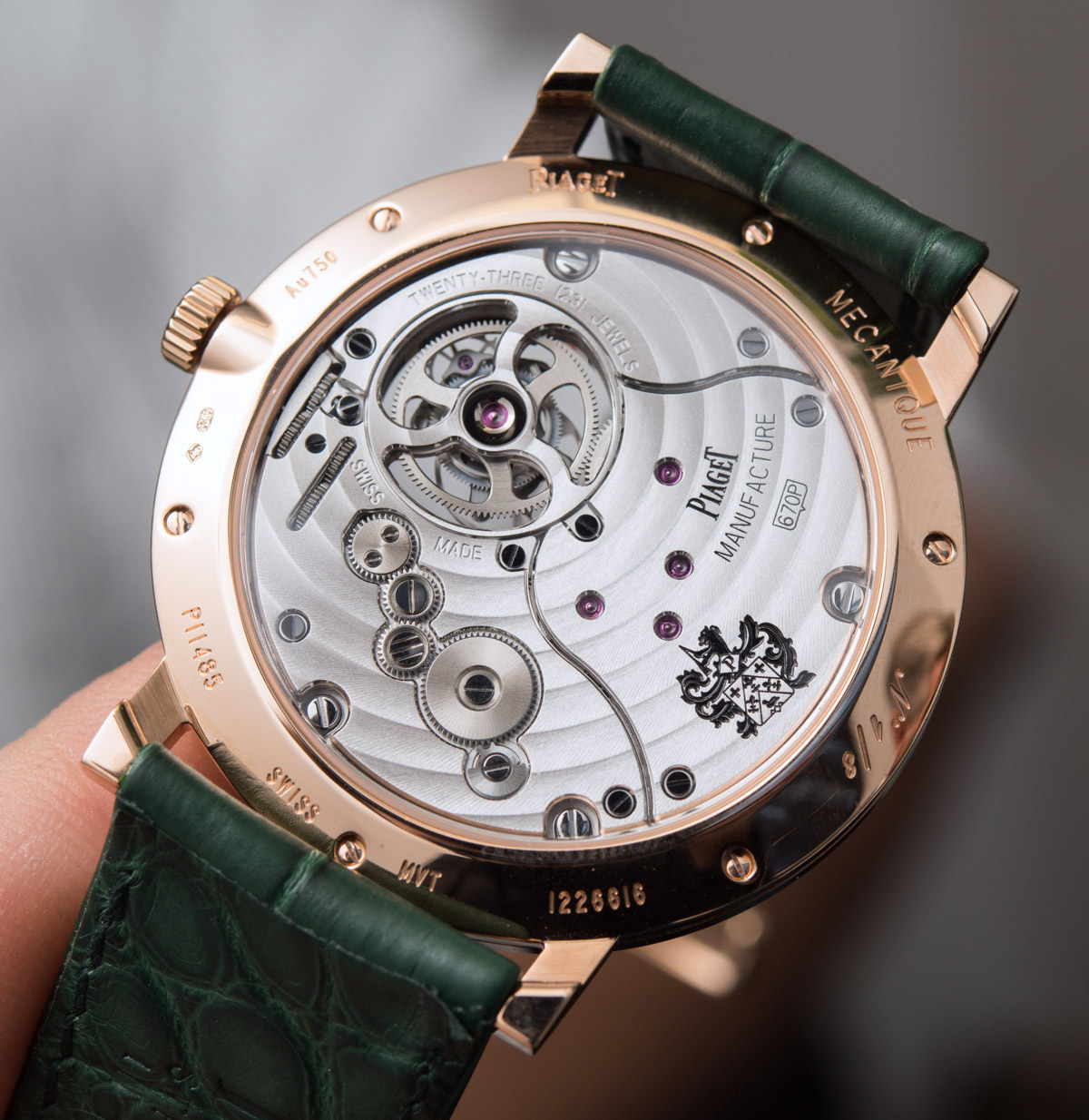 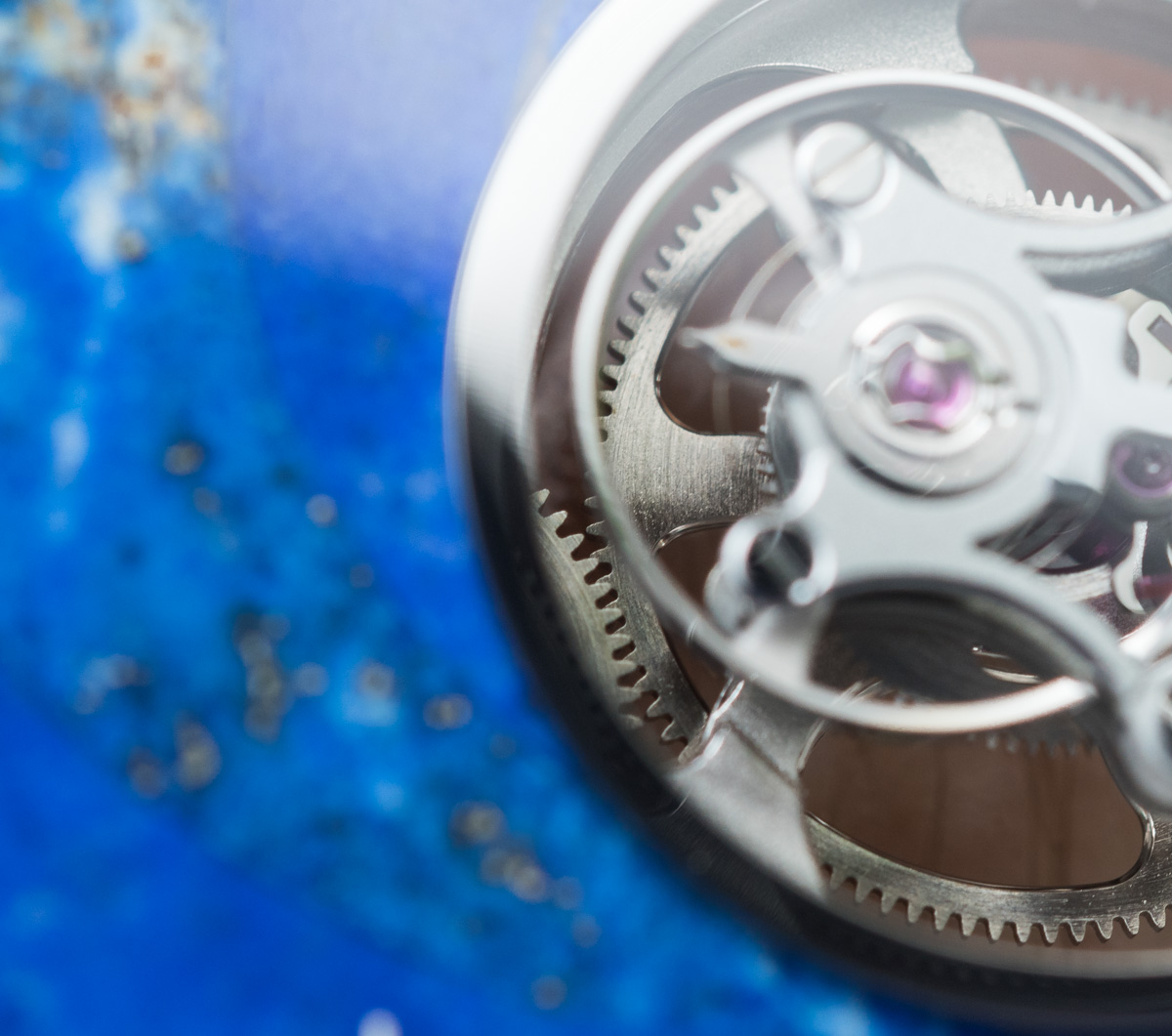 This Altiplano Flying Tourbillon features the 4.6mm thick Calibre 670P that is now equipped with a new barrel to stretch its power reserve to 48 hours – that isn’t great, but isn’t bad either from a thin movement that has to power a tourbillon. Speaking of which, the carriage of the tourbillon, secured only from the caseback side, is crafted from titanium which, with all its 42 components installed, still weighs only 0.2 grams (that’s 0.007 ounces). 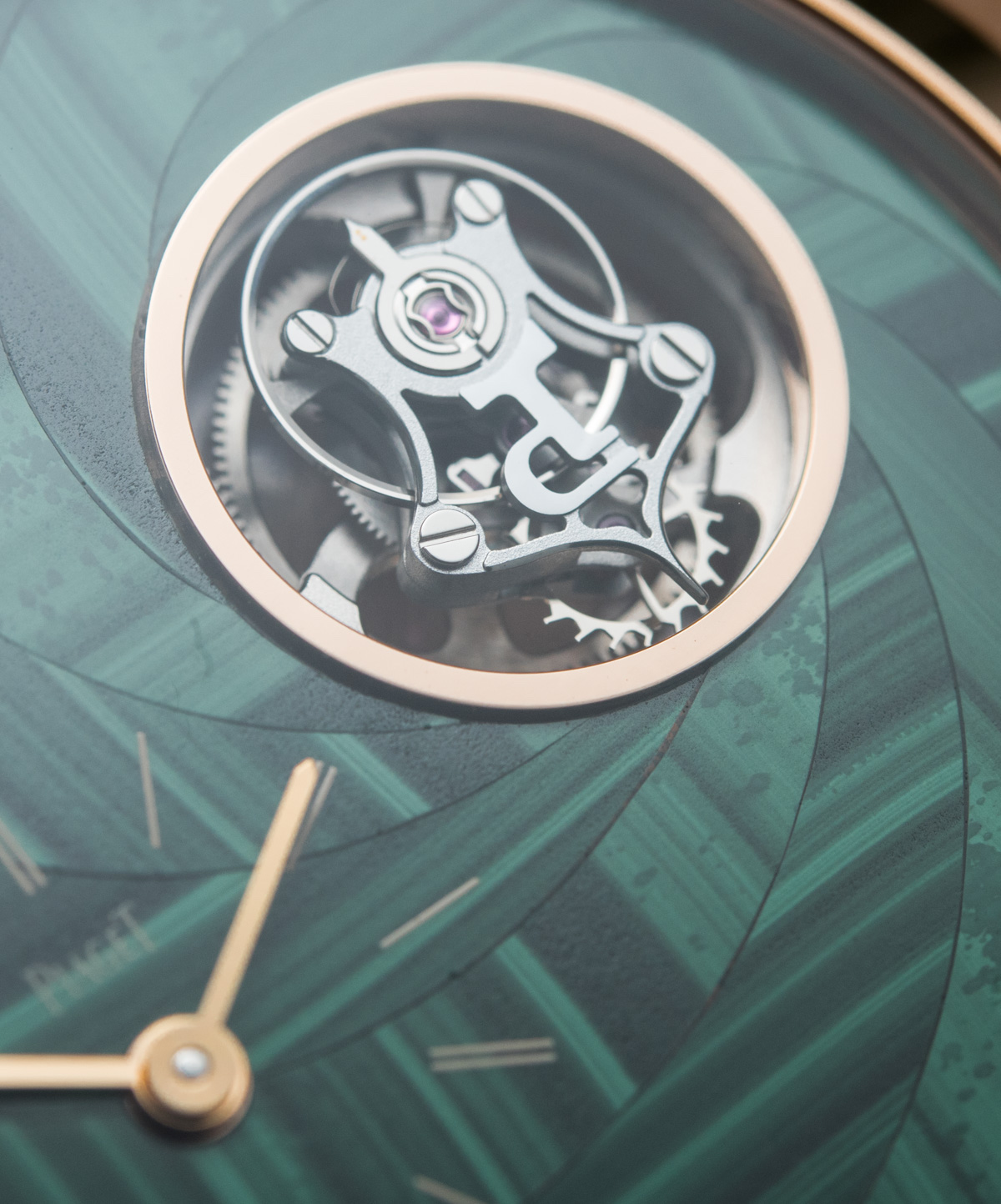 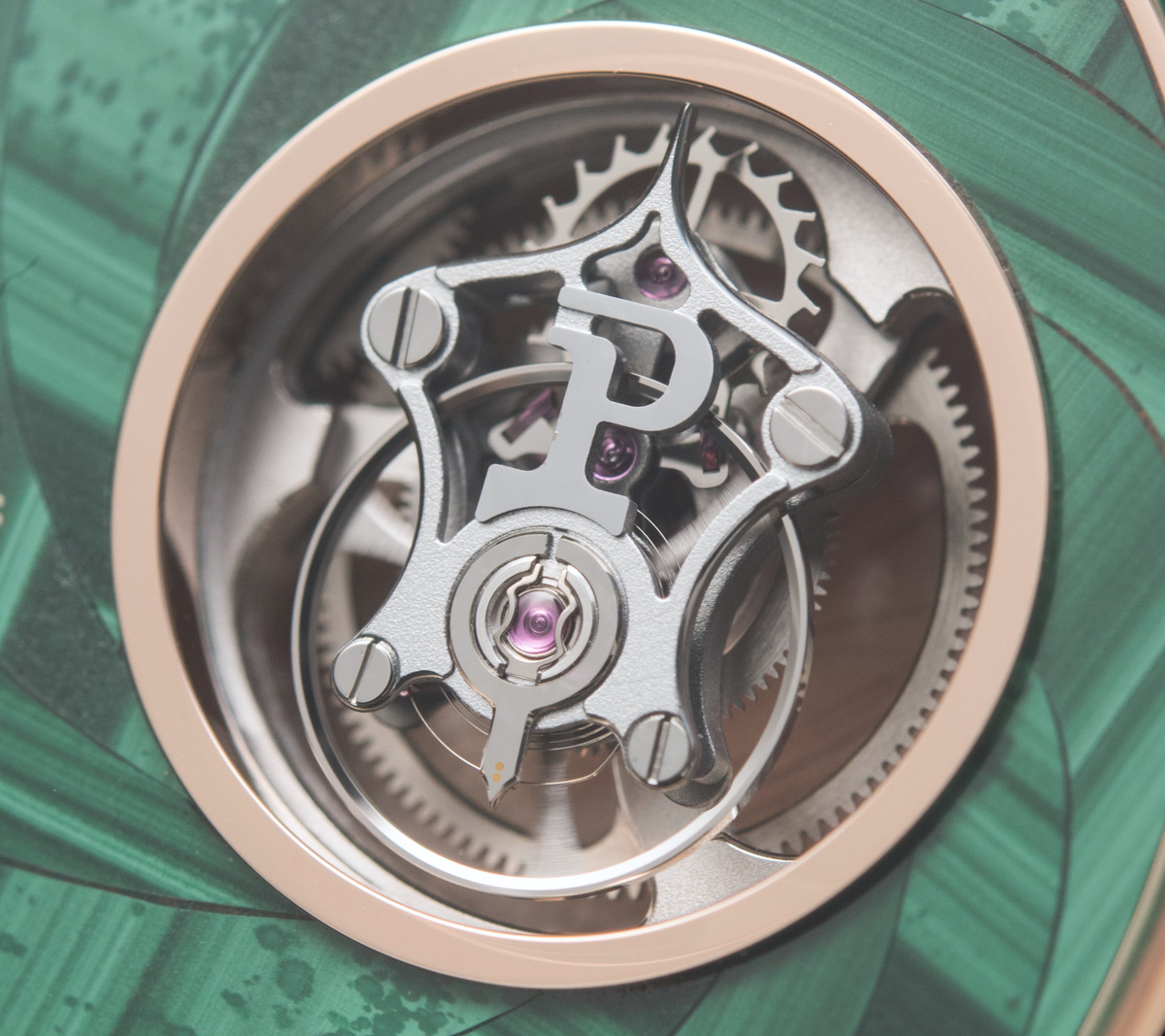 I mentioned above that it was after a while that I could discover this love-at-first-sight’s flaws or, as I should have said, flaw – the sub-par finishing on the tourbillon itself. The top of the cage appears to be sandblasted, while its outer edge, especially the one that ends in the point above the “P” appears hand-bevelled, but the rest is underwhelming. The P even has a slight flaw on its left, while the inner edges of the carriage and the screw-heads appear to be not very refined either. When talking six figures in a relatively low component count watch, and especially when a larger component is displayed prominently, it should be absolutely stellar, in my opinion. Titanium isn’t exactly new and although it is admittedly difficult to work with, I think there’s some room for improvement here. I know we’re splitting hairs, but we aren’t talking about an entry-level watch – not in terms of pricing, nor presentation. 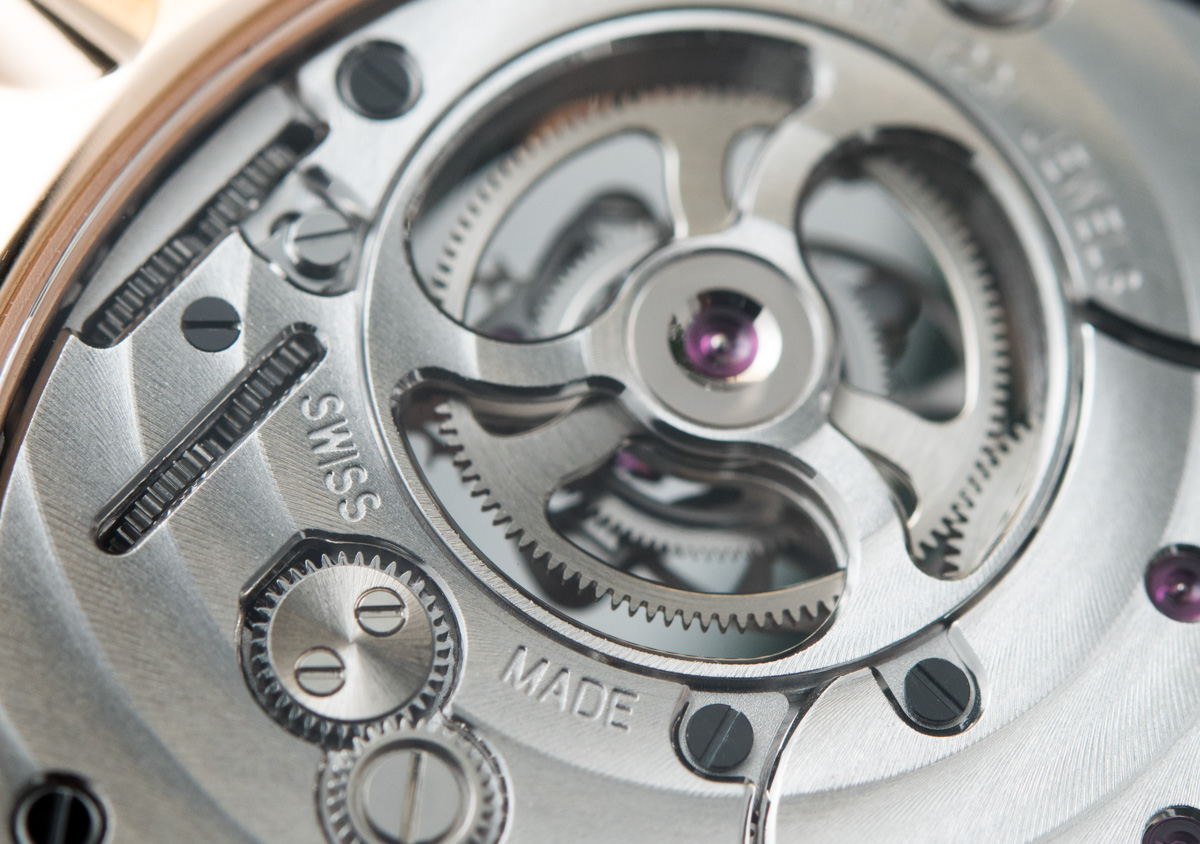 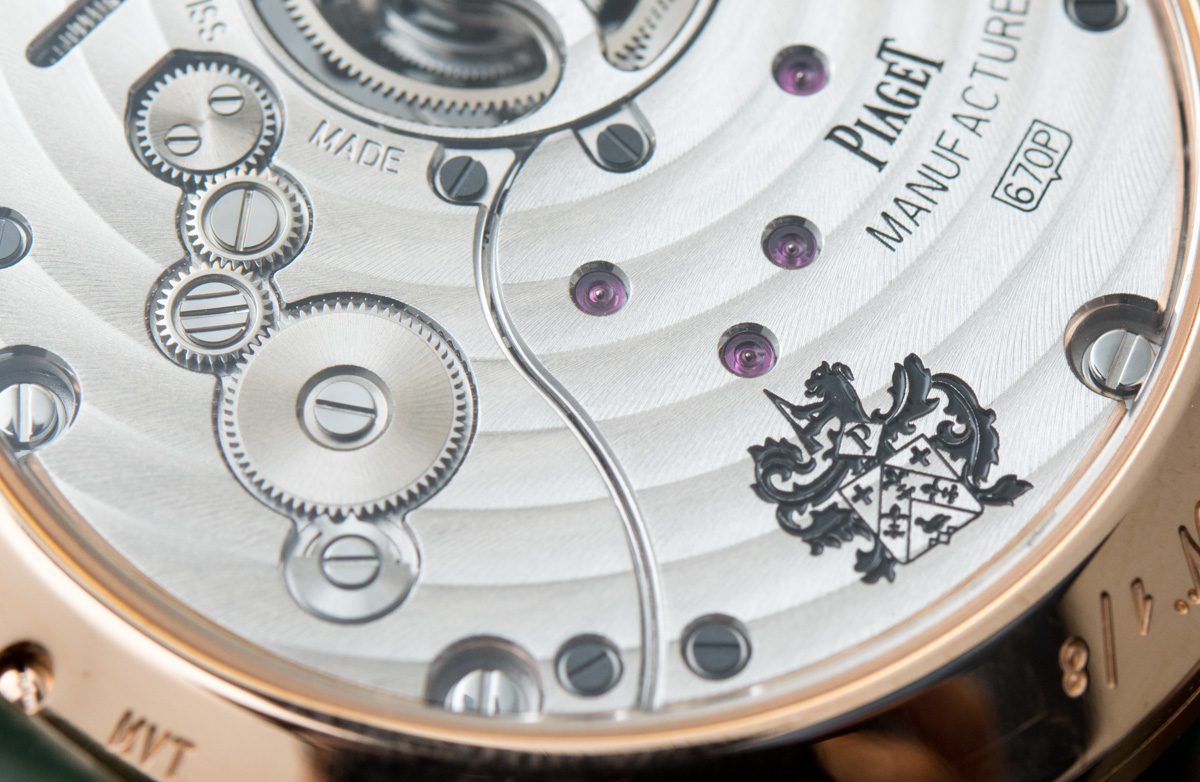 The rest of the movement is neat, although it once again is not much to write home about. Panerai has been getting more creative lately with rendering its big plates more visually interesting with some arbitrary cut-outs here and there. So while I understand such extra-thin movements can’t afford to have massive bridges spanning across the caseback, a few more “negative spaces” with more bevelled edges would help make the caseback view more interesting. To their credit, the inner spokes of the large third wheel under the tourbillon, as well as all other edges and countersinks on the back have hand-bevelled and polished edges, which is as it should be. 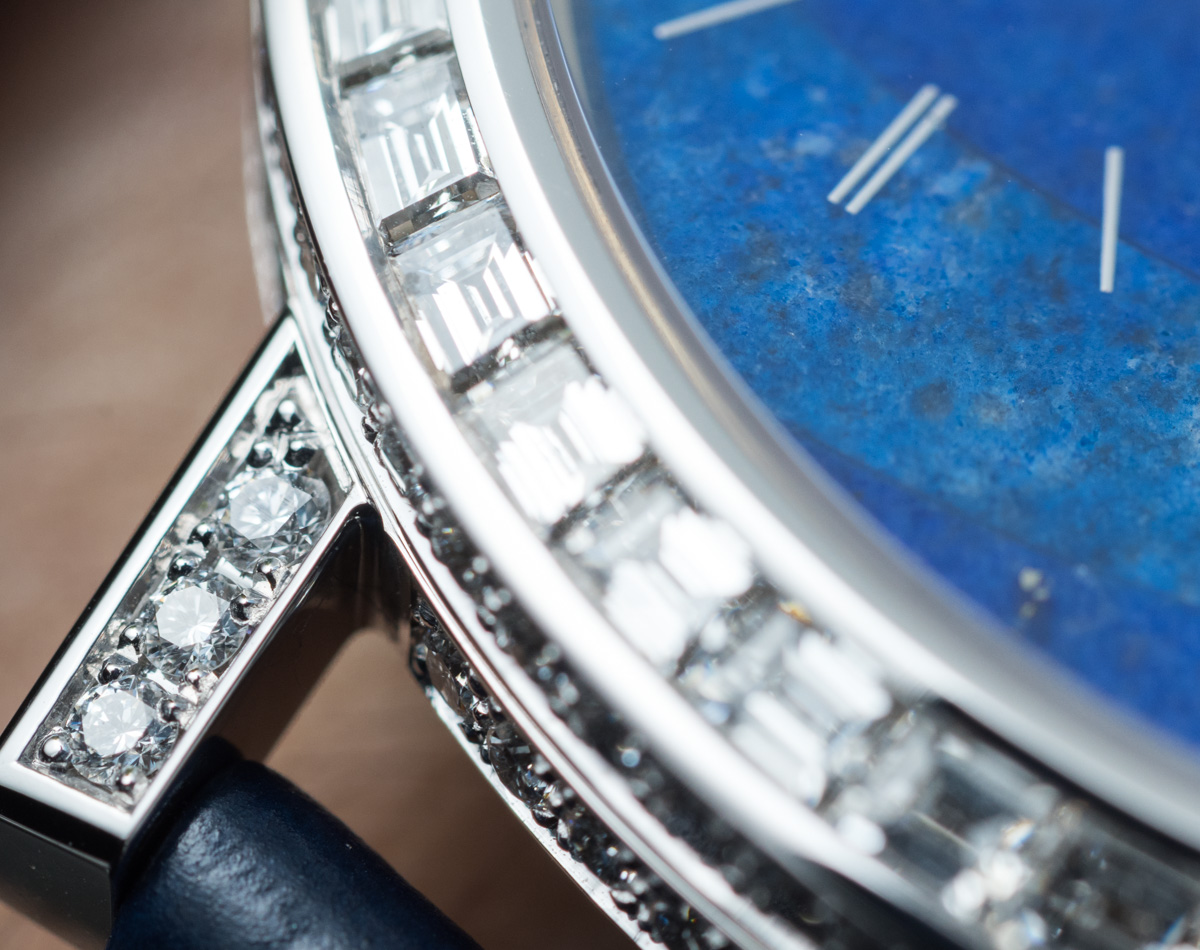 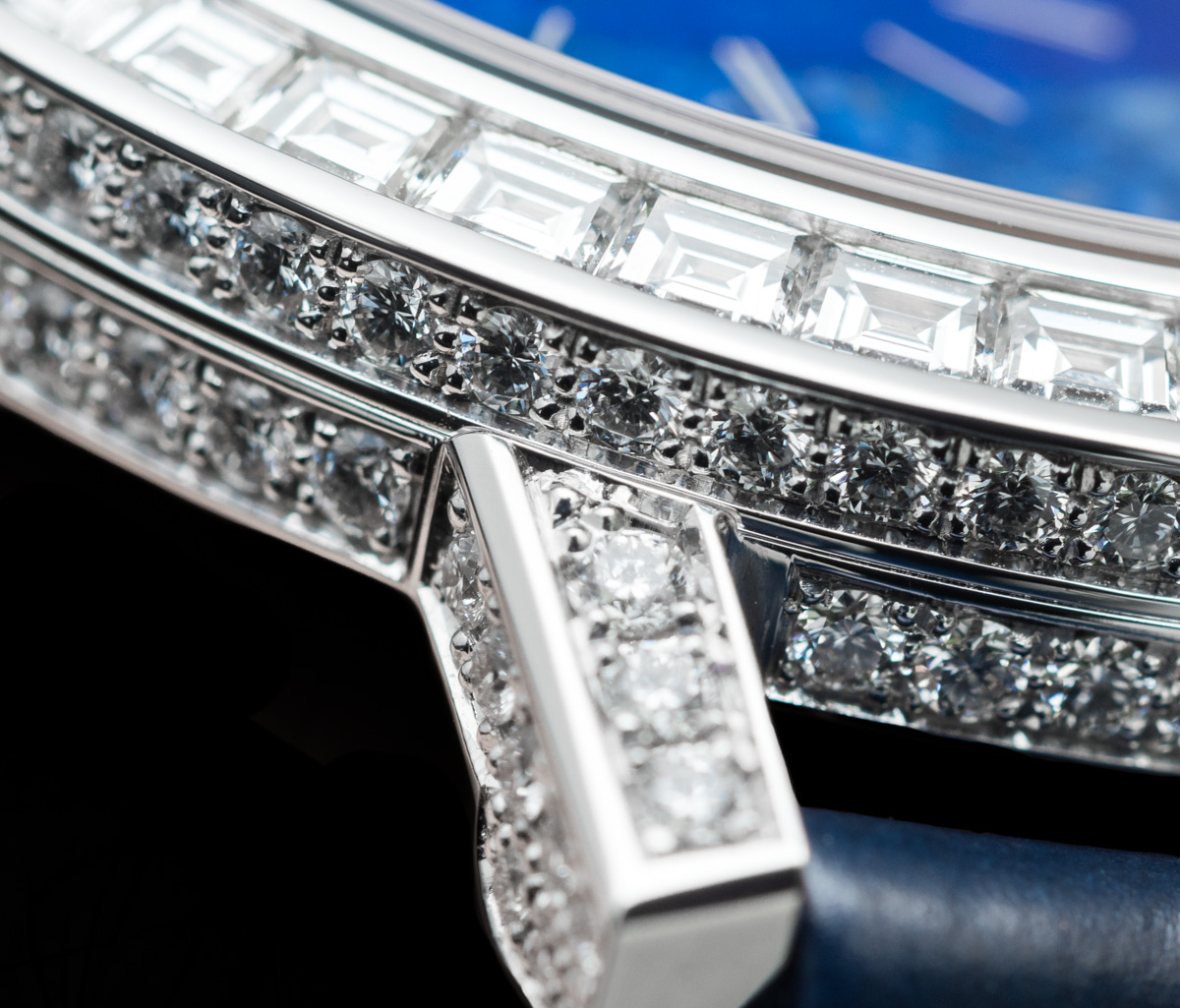 The white gold version with its blue lapis lazuli dial packs what appears to be a metric ton of diamonds with larger, baguette-cut stones set into the bezel and brilliant-cut gems set into the side and upper segment of the lugs as well as into two rows around the case-band. On a side note, we have certainly been seeing an uptick in “iced out” watches at this SIHH, but the quality of stones and their setting have varied greatly, to put it mildly. Here it is almost as though the jewelers at Piaget responsible for making this particular watch knew it was to go with a dial of such quality, and they really went out of their way to do something exceptional. Just stunning stuff, the sort that won’t make you love diamond-set watches if you don’t already, but will impress you if you do. 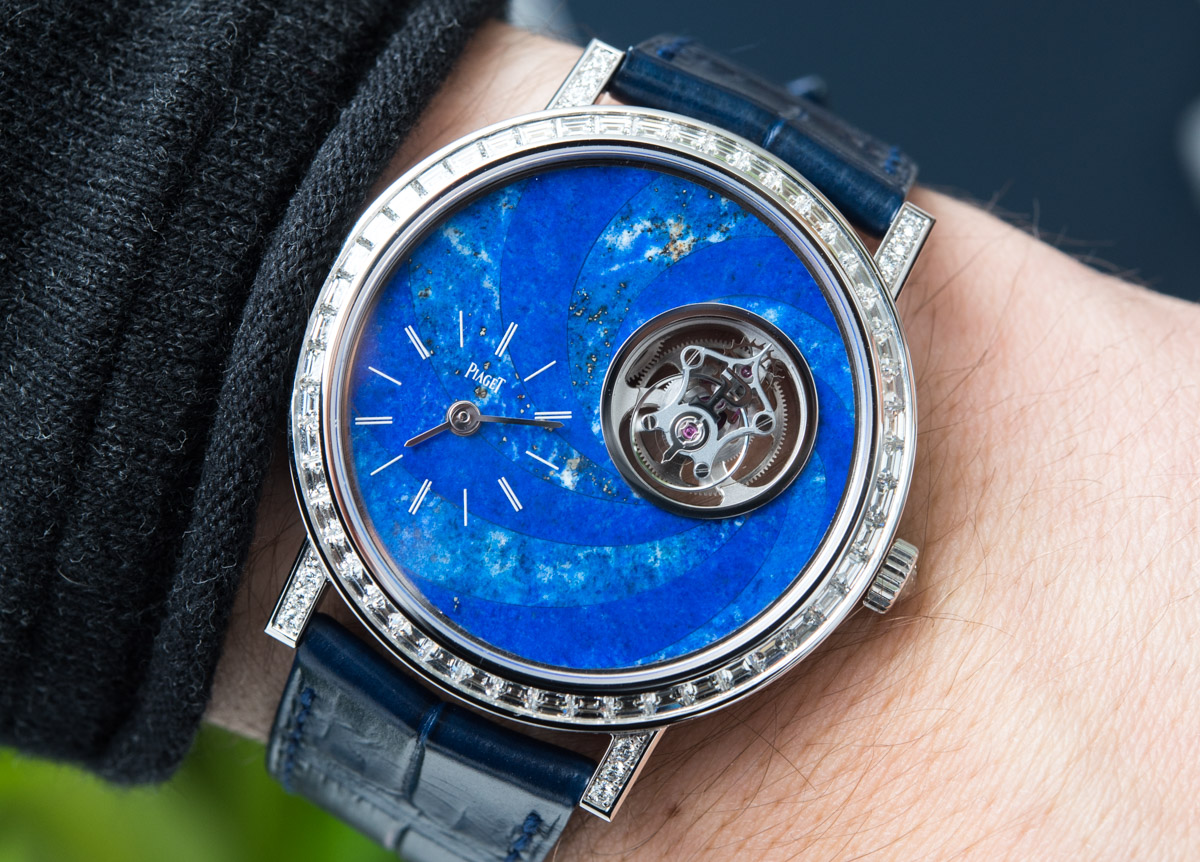 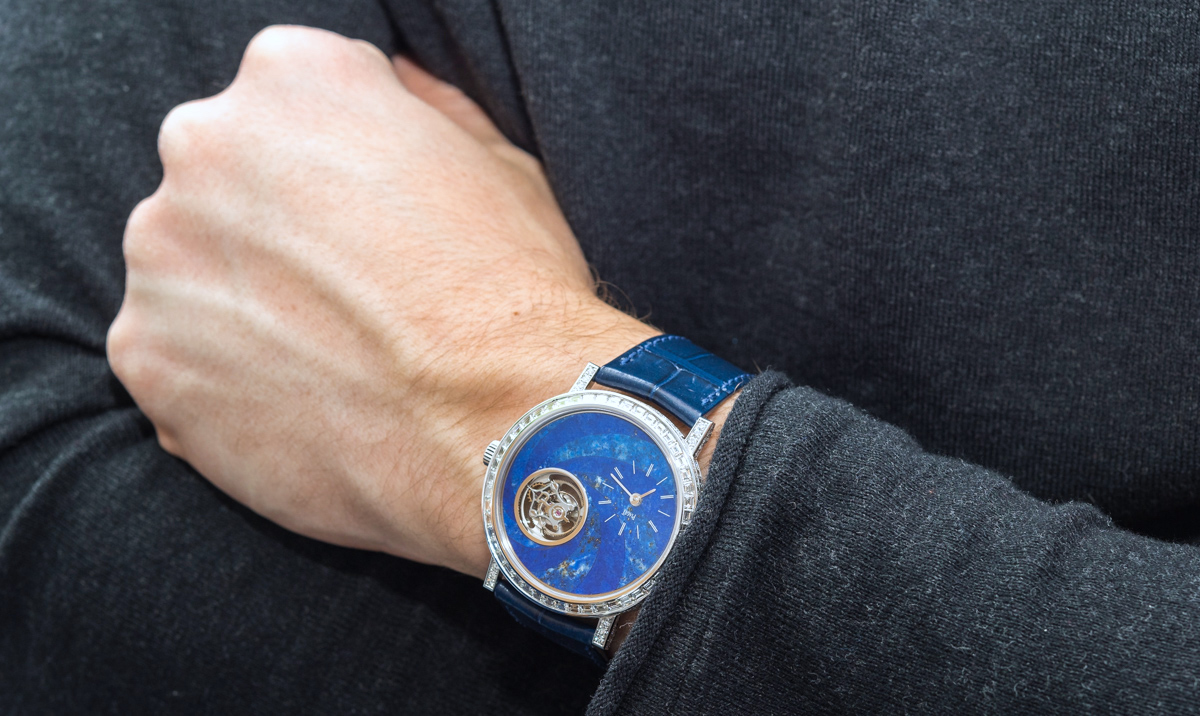 This particular blue model had a set of lapis lazuli pieces that were a bit more exciting to me than the stone usually proves to be. With those few larger, more concentrated yellow areas by the tourbillon and the varying depths of blue everywhere else this particular dial resembled a map to me, with little islands and the currents of the oceans on show. For this reason I really enjoyed this very piece but it also made me realize how when commissioning one of these from Piaget, you’ll probably want to be able to choose from the dials available – the colors and patterns can vary and what may be a miss in the eyes of one can prove to be a hit in the eyes of another. 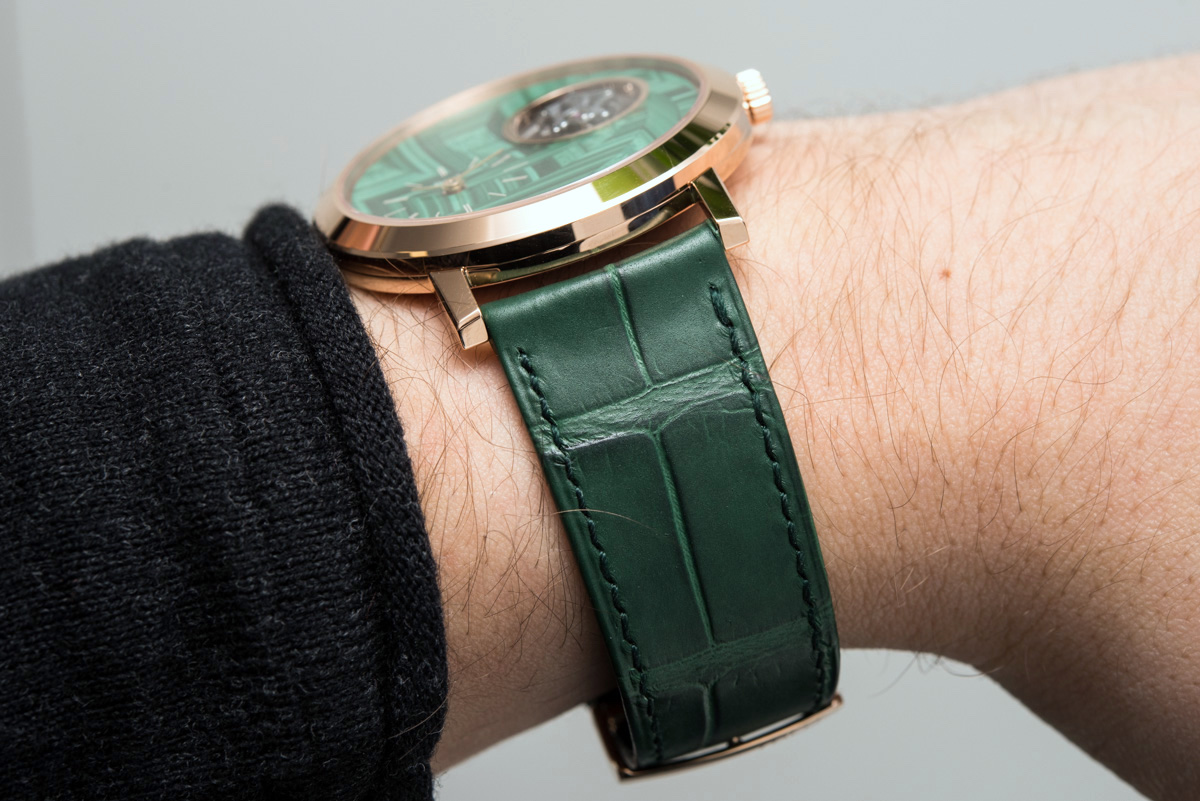 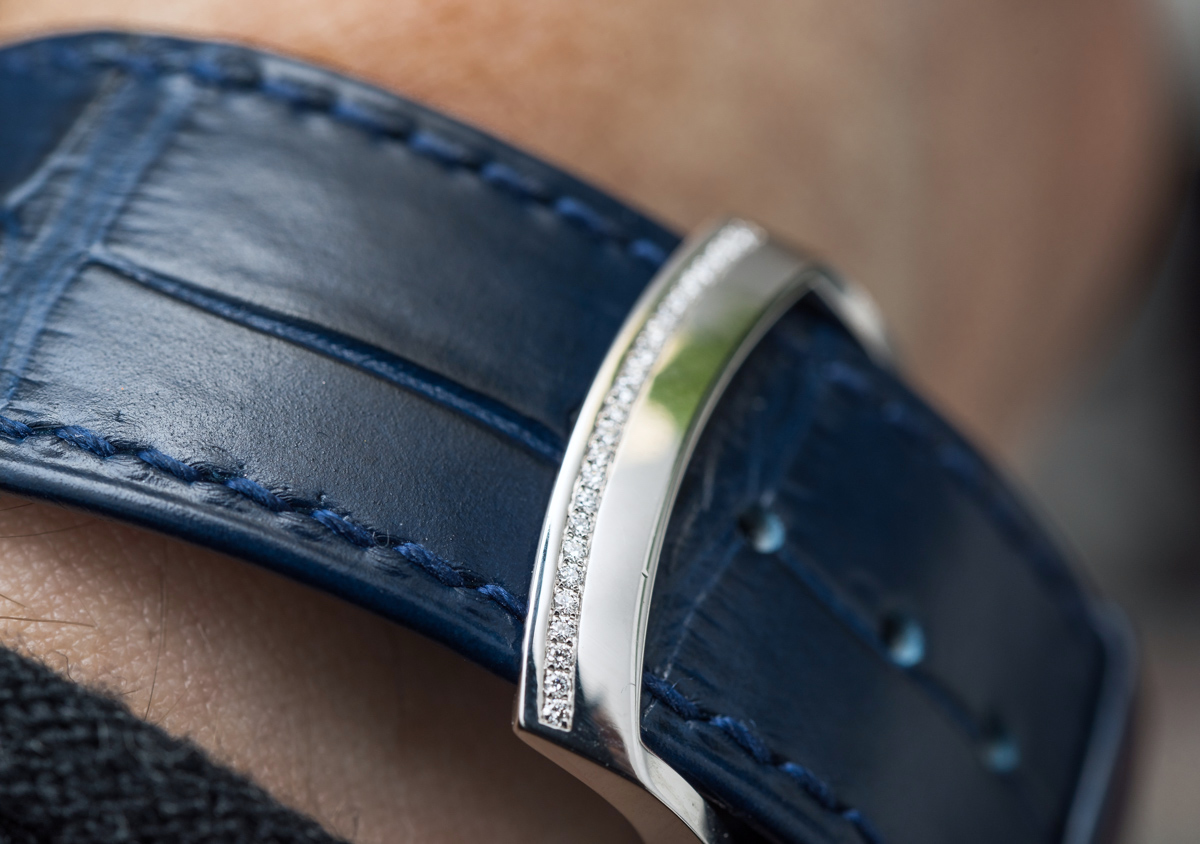 Now, looking at these images I realize that these watches appear much more feminine in pictures than they did live, especially when there is a focus on the straps and buckles and not on the watch itself from a more frontal view. Nevertheless, at 41mm wide and not ultra-thin, these watches have ample volume and presence to render them sufficiently masculine when worn out in the wild. I wonder how they’d look on a grey or a brown strap. They’d probably appear less “seasonal” and hence that much more masculine. 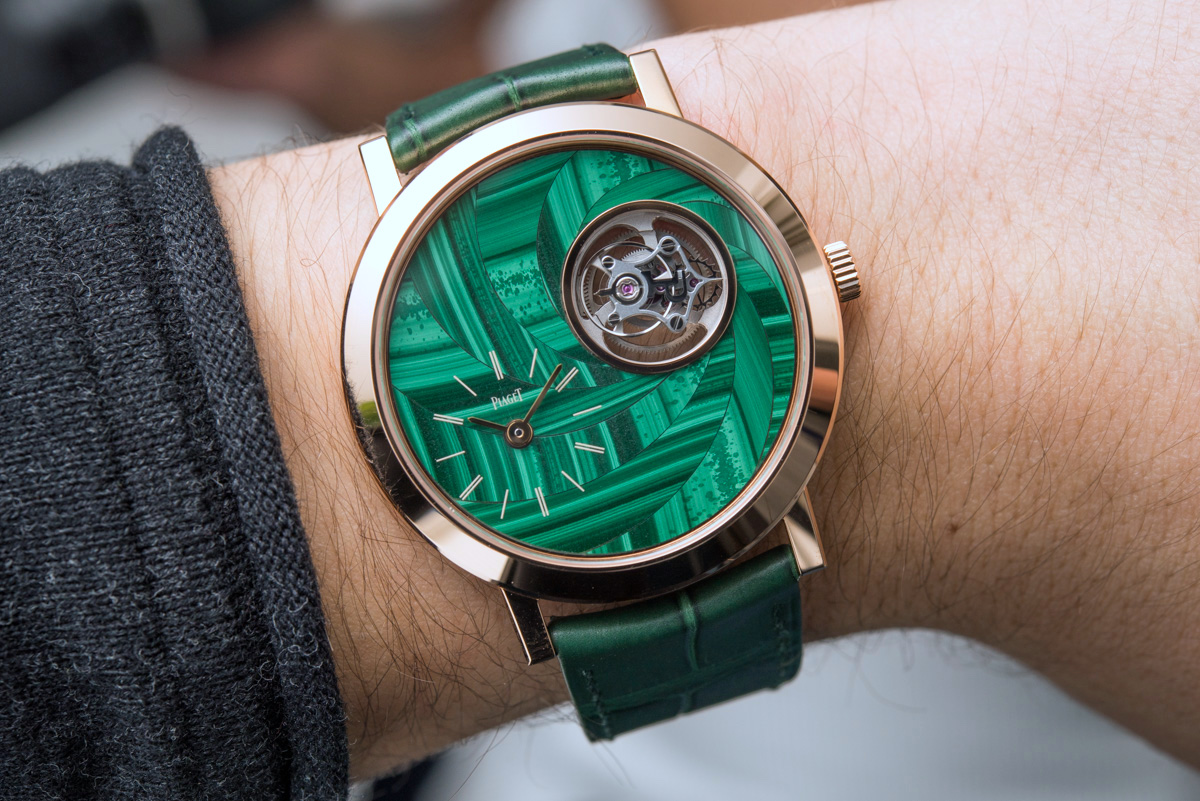 Utterly inundated with all the vintage nonsense recently, this watch is as refreshing as it is effortlessly timeless. This watch, given its size and aesthetic balance will remain relevant and wearable much longer – technically infinitely – than those unimaginative recreations. I applaud Piaget for creatively pairing one of their movements and cases with the commissioning of an expert craftsman. The result is the sort of synergy that takes more creativity and intelligence than all anniversary and homage and jubilee releases of SIHH 2018 combined.

It is futile though to compare this watch to anything else. You either like it and get it, or you don’t and it’s all good either way. There are only 8 of each being made and I’m sure there are 16 people out there who will buy and, hopefully, wear them. Pricing for the Piaget Altiplano Flying Tourbillon with the malachite marquetry dial and the lapis lazuli marquetry dial with the diamond-set case is well into the six-figure range. piaget.com