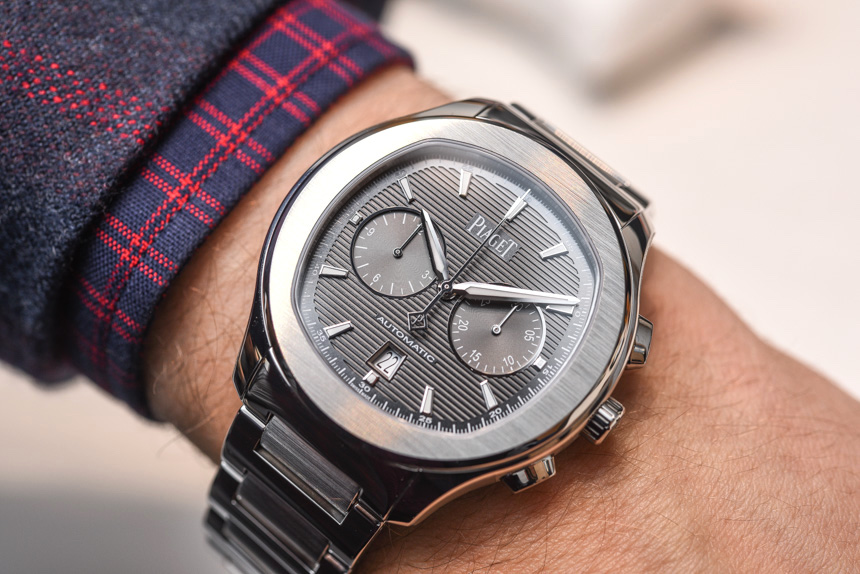 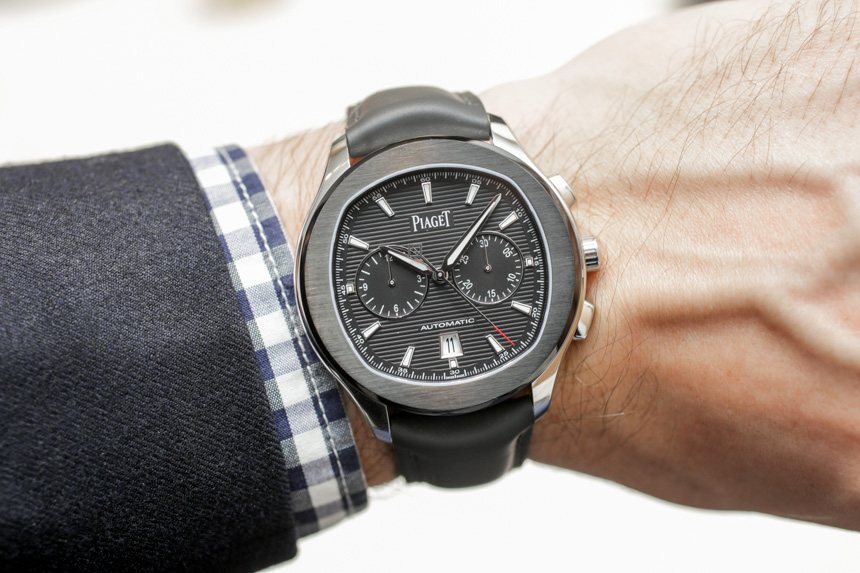 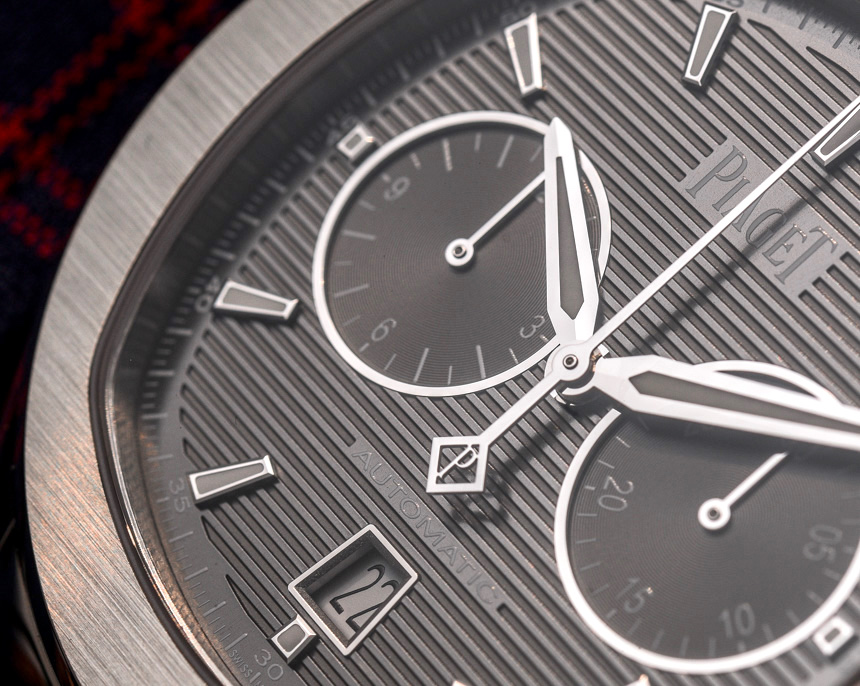 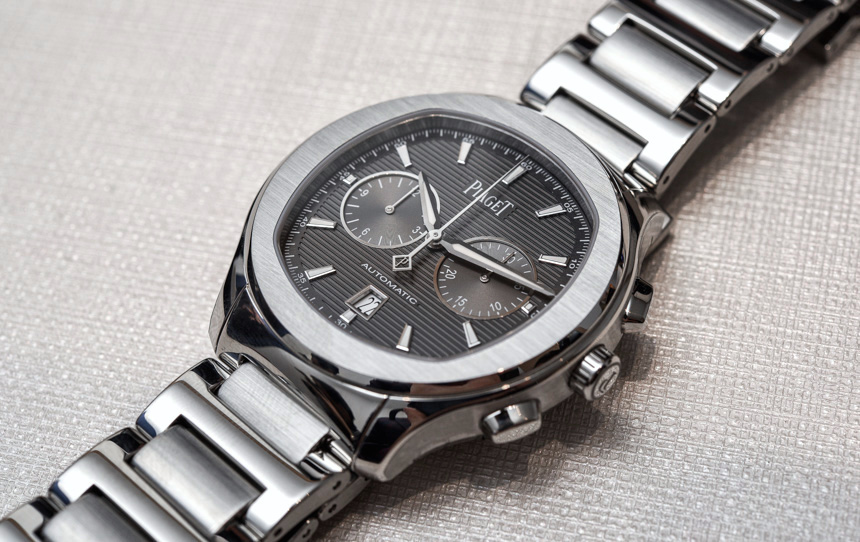 Before I talk about the Polo S Chronograph watch, it is worth doing a quick recap of the new Piaget Polo S watches. Unofficially, the “S” stands for steel and sports. But perhaps more importantly, the design of these new watches has generated a lot of chatter online, mainly because of their resemblance to Patek Philippe’s Nautilus and Aquanaut. But I think that is mainly because most people are unaware of Piaget’s earlier Polo watch from the late ’70s. If you are familiar with the vintage Polo, you’ll immediately see that the new Polo S watches have more in common with the vintage Polo than Patek Philippe’s Nautilus and Aquanaut. 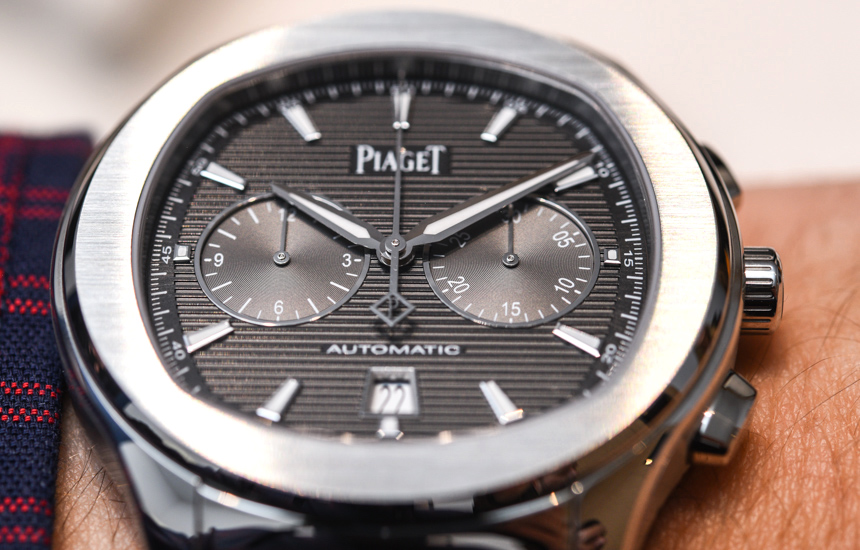 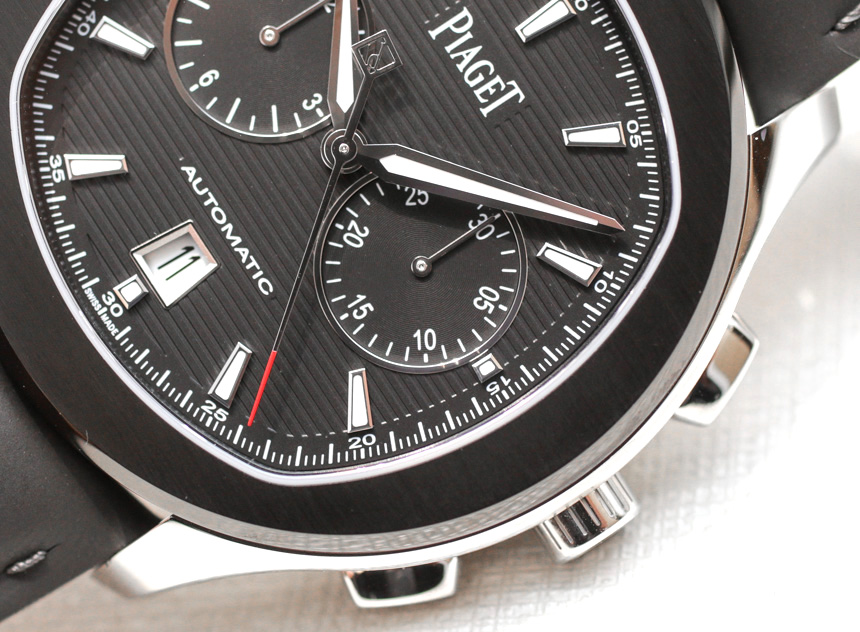 That said, I won’t deny that there are similarities between the Polo S and the two similar-looking Patek Philippe sport watches, but, in the flesh, the Polo S has a much more distinctive design than what press photos would suggest. Further, the limited edition (there will be 888 made) Polo S Chronograph in black with its rubber strap gives a distinctly sleeker and younger style. Either way, both of these models present a relatively value-priced offering that is a notch above options from Omega and Rolex and are competitive with pieces like the Nautilus, Overseas, Royal Oak, etc… 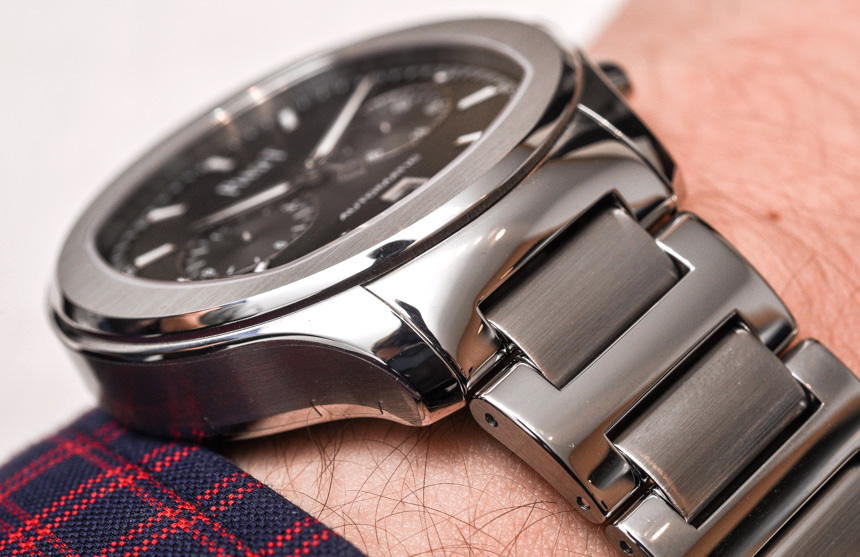 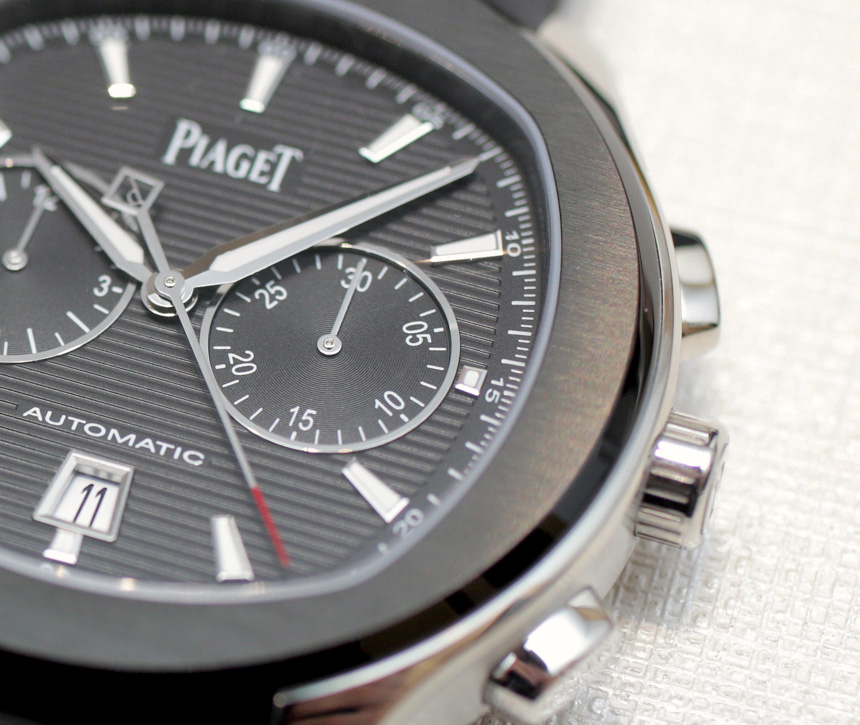 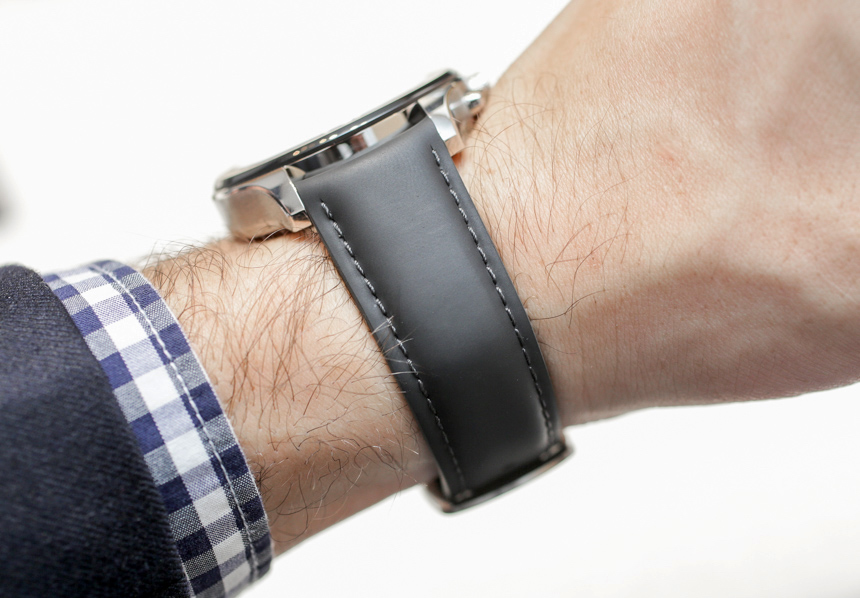 The Piaget Polo S Chronograph comes in a 42mm stainless steel case and measures 11.4mm thick. These are pretty typical dimensions for a modern luxury sports chronograph. However, the thick bezel and the flat case back help make the watch look smaller than it actually is. In person, the flat case back helps keep the watch close to the wrist and creates the illusion of a thinner watch. It’s a fairly comfortable watch to wear. 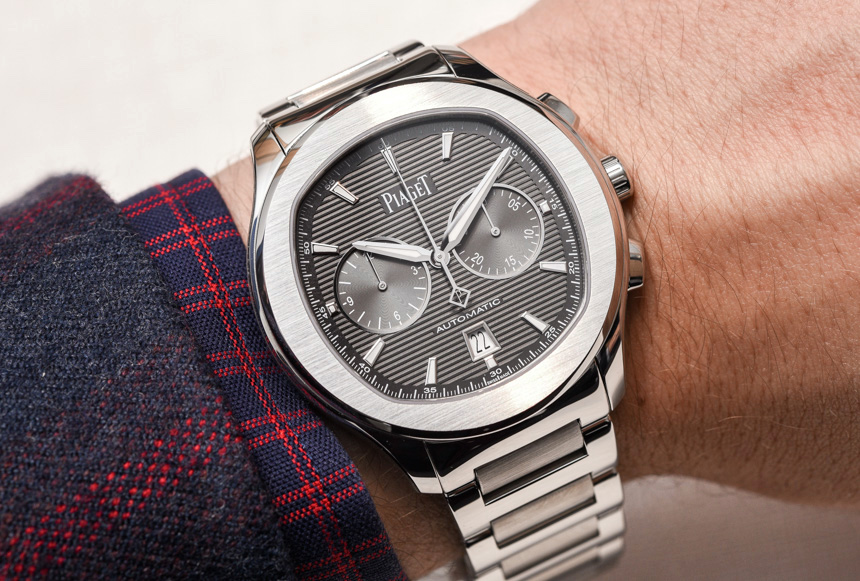 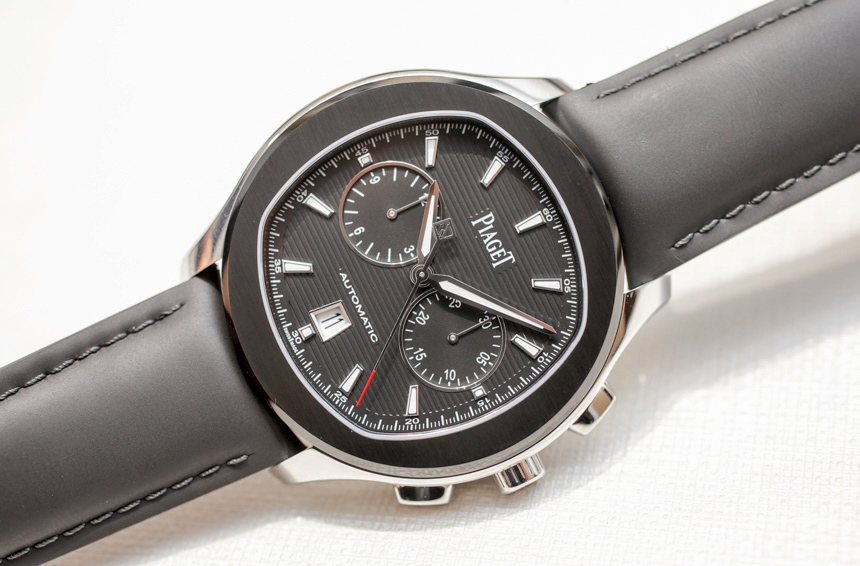 On the wrist, the Polo S Chronograph exudes considerable presence thanks to its size and the fine work that Piaget has done with the case. It is well-finished and combines elements of round and cushion-shaped cases for a rather distinctive look – the bezel is round and the cushion-shaped dial is somewhere between the two. Water resistance is 100 meters, which is adequate for a sports watch. 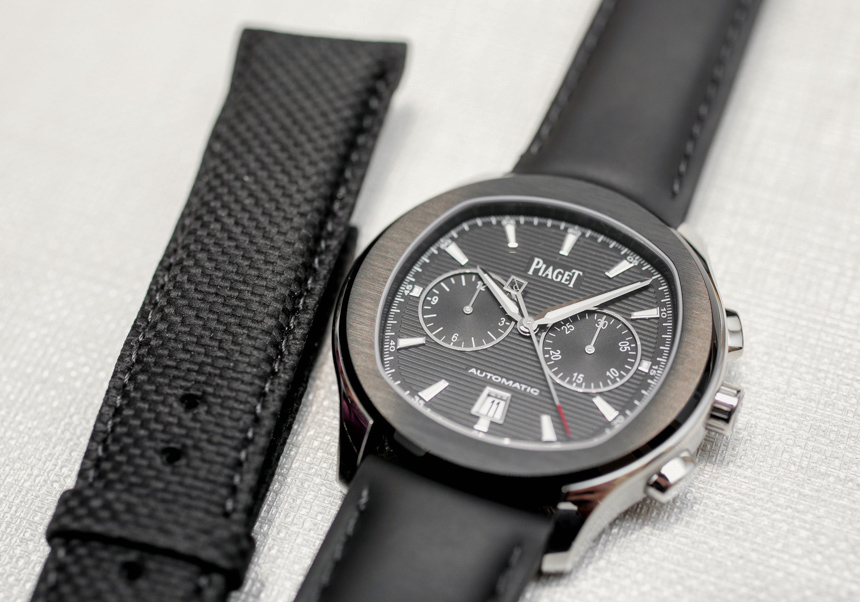 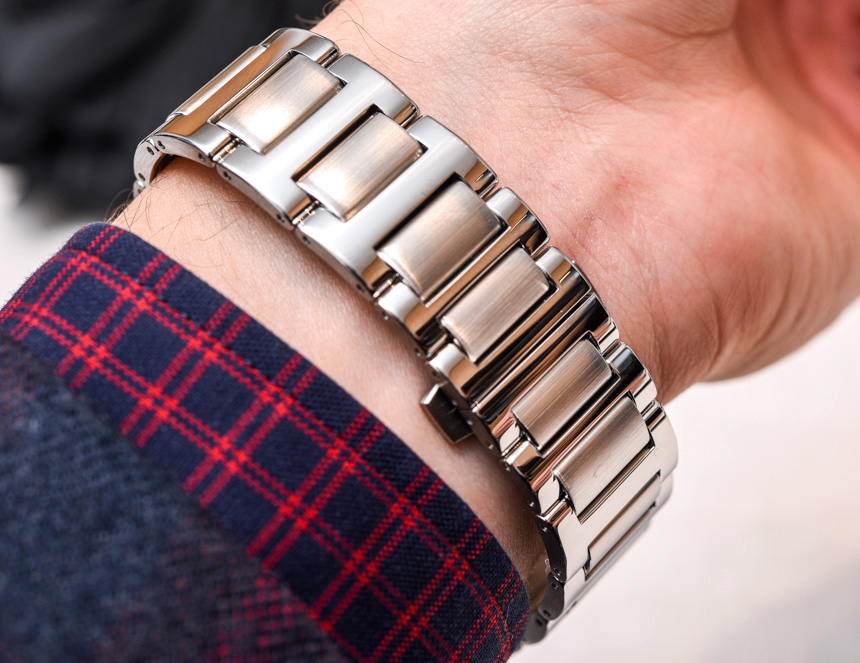 The bracelet is nicely crafted too, with a mixture of polished and satin-brushed links. However, I do feel that for a luxury sports watch, the bracelet ought to taper in order to create a more elegant look. Here, the Polo S Chronograph’s bracelet has a uniform width throughout that doesn’t look as stylish as the other elements of the watch, in my opinion. As for the rubber strap on the black version, there were mixed opinions on the standard Polo S black version. Still, the stitching lends at least somewhat of a refined look to the often more affordable material. 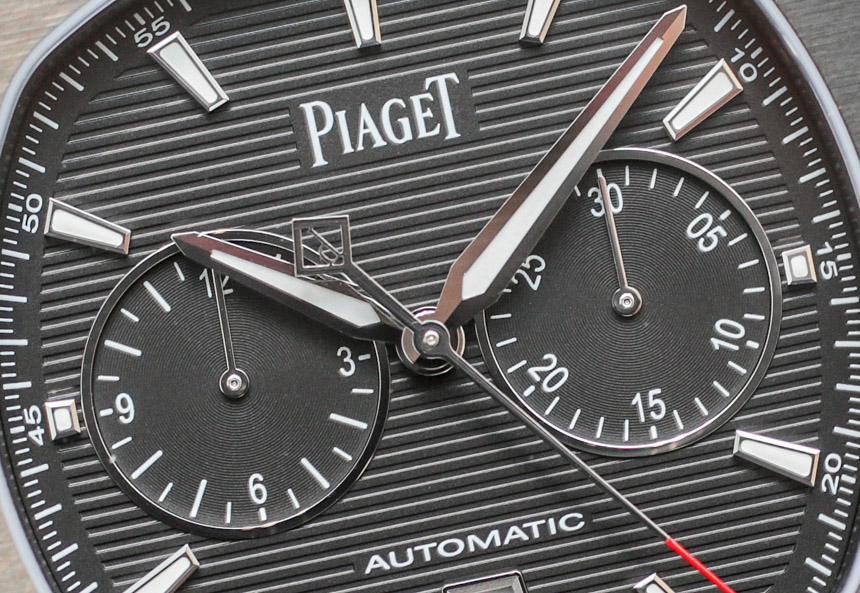 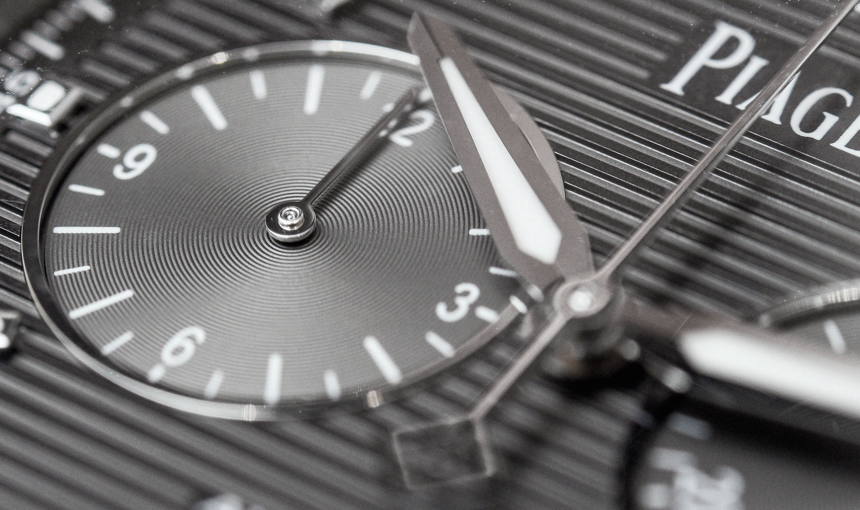 The Polo S Chronograph is available with a blue, white, or gray dial. The limited edition variant that can be distinguished by its dark black dial, ADLC-treated bezel, and black rubber strap also has a red-tipped seconds hand. The dials all have horizontal pinstripes that pay homage to the vintage Piaget Polo watch. The horizontal guilloche created some controversy as the Nautilus is so closely associated with the design choice but it certainly isn’t unique to it and Piaget executes it confidently. 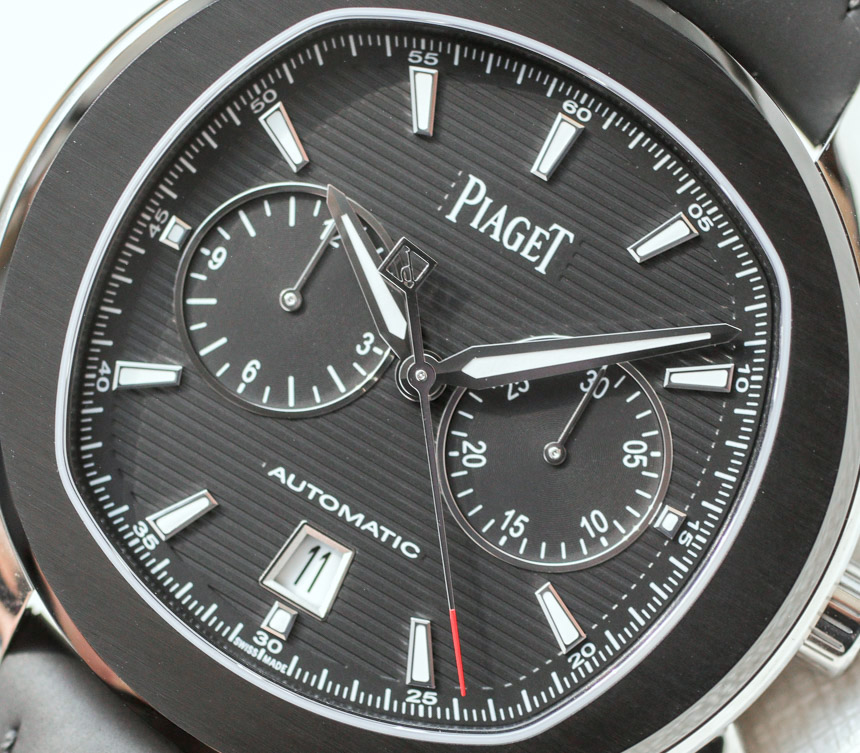 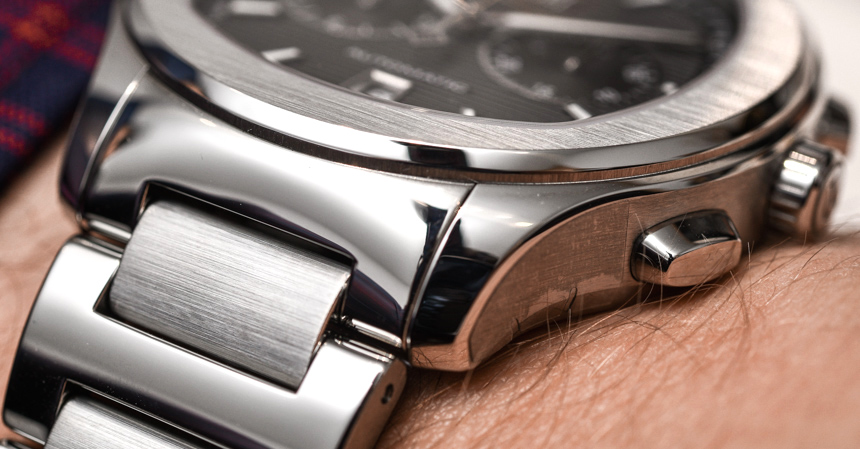 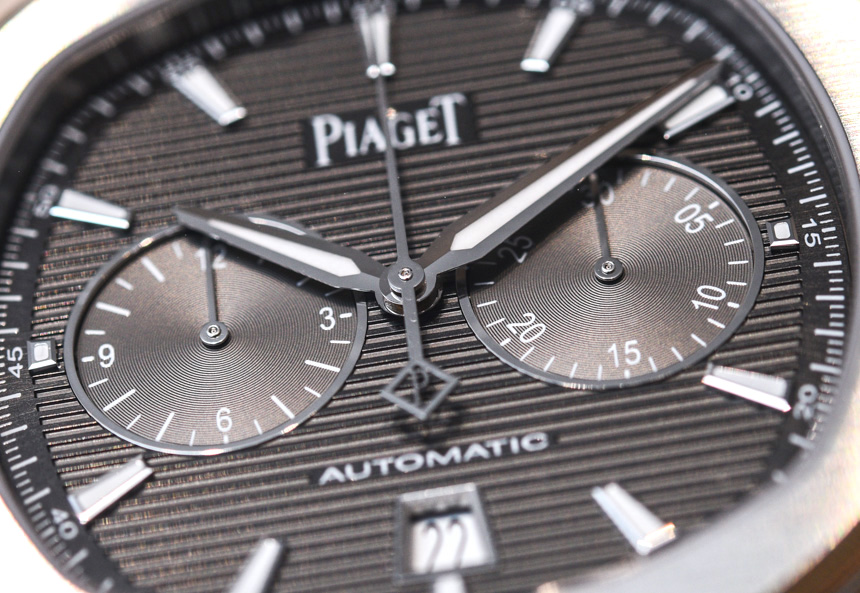 In the case of the Polo S Chronograph watch, I must say that the entire dial is pretty well executed for its price. There’s a high level of finishing exhibited here. The applied indices are beveled to help catch light, and are neatly applied with Super-Luminova, as are the hour and minute hands. The date window at 6 o’clock even has a frosted finish on the frame. The dial is clean too, with minimal text – only “Piaget” and “Automatic” – and the subdials for the elapsed hours and running seconds. That said, my favorite detail of the entire dial has to be the central seconds hand, which has an openworked letter “P” as a counterweight. 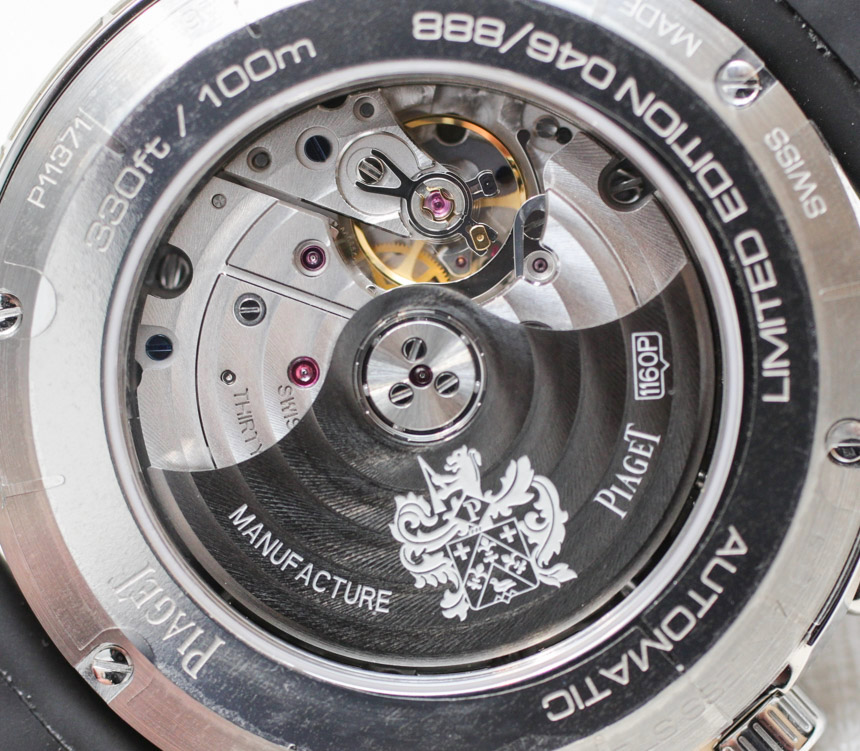 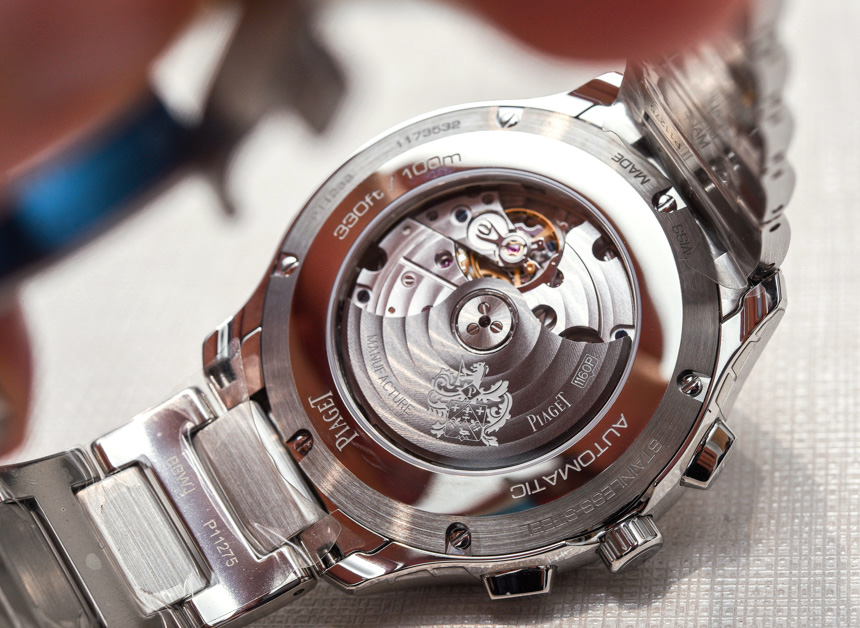 The Polo S Chronograph is driven by Piaget’s 1160P movement, which has all the features you would expect from a modern high-end chronograph movement. It has a column wheel and vertical clutch, beats at 4Hz, and has an above average power reserve of 50 hours. When the Piaget 1160P is closely observed and compared with fellow Richemont brand Cartier’s 1904-CH MC, you will see that there are lots of similarities between the two. Make of that what you will, but I don’t see this as a problem. 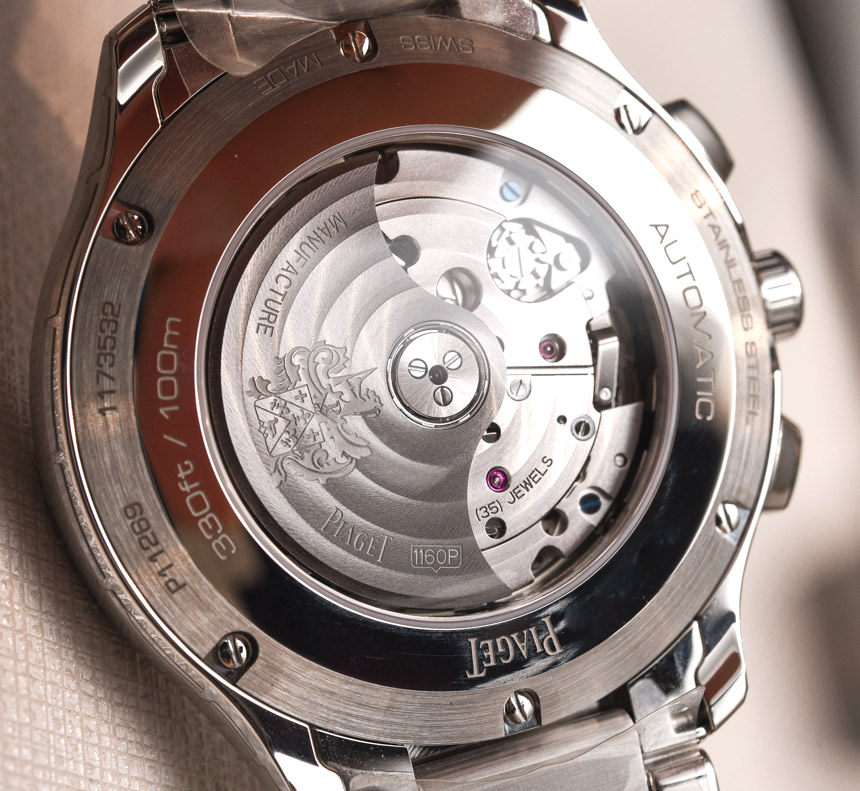 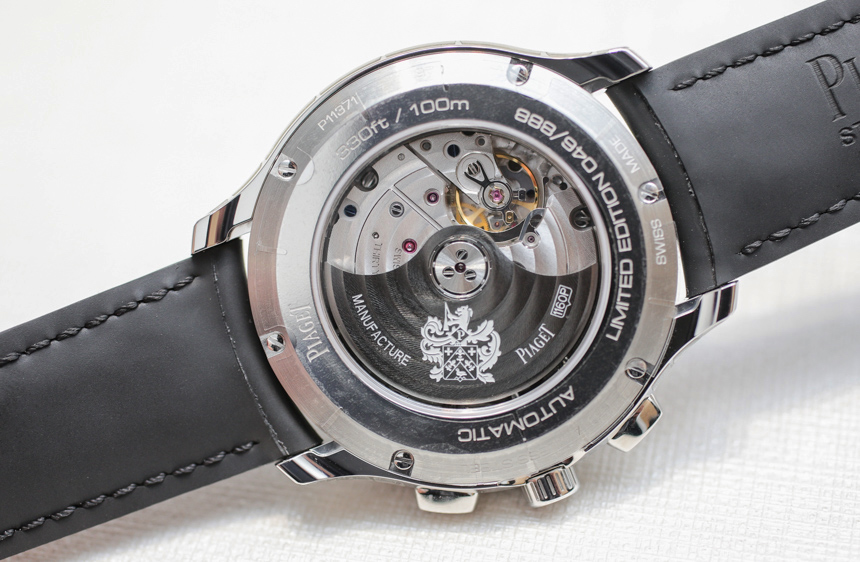 More importantly is the fact that there’s a display case back and that the movement is quite nicely finished. The large rotor blocks much of the view, but at least it is well decorated with circular Côtes de Genève and the Piaget coat of arms. The main plate also features circular Côtes de Genève with beveled bridges and blued screws. And, naturally, the black model has an anthracite balance wheel. 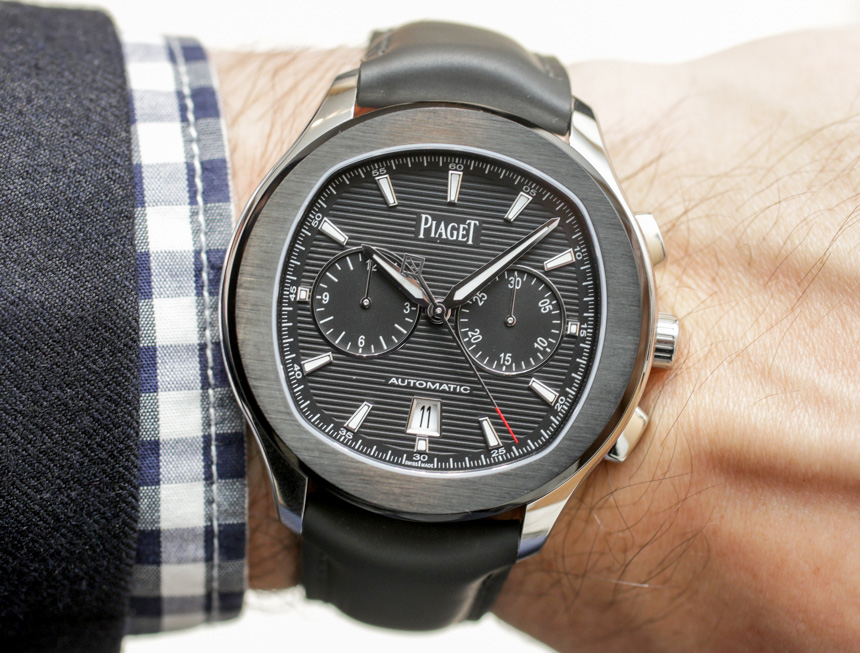 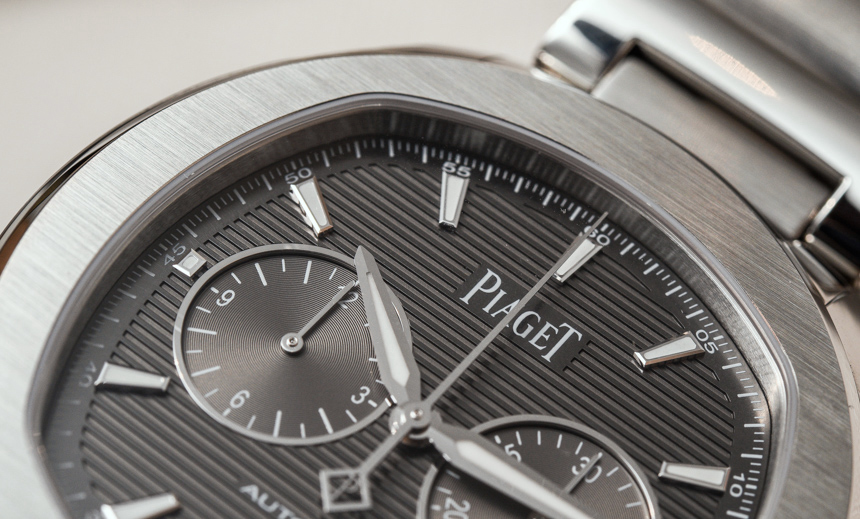