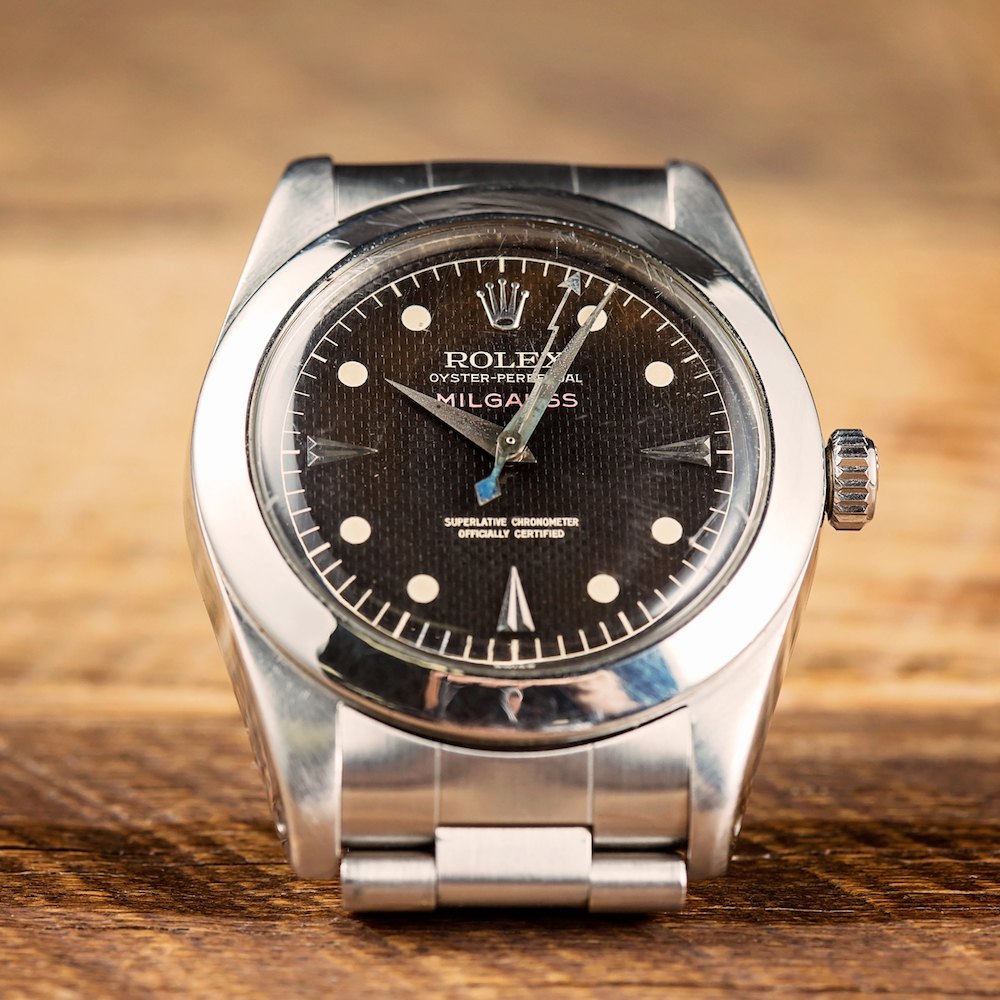 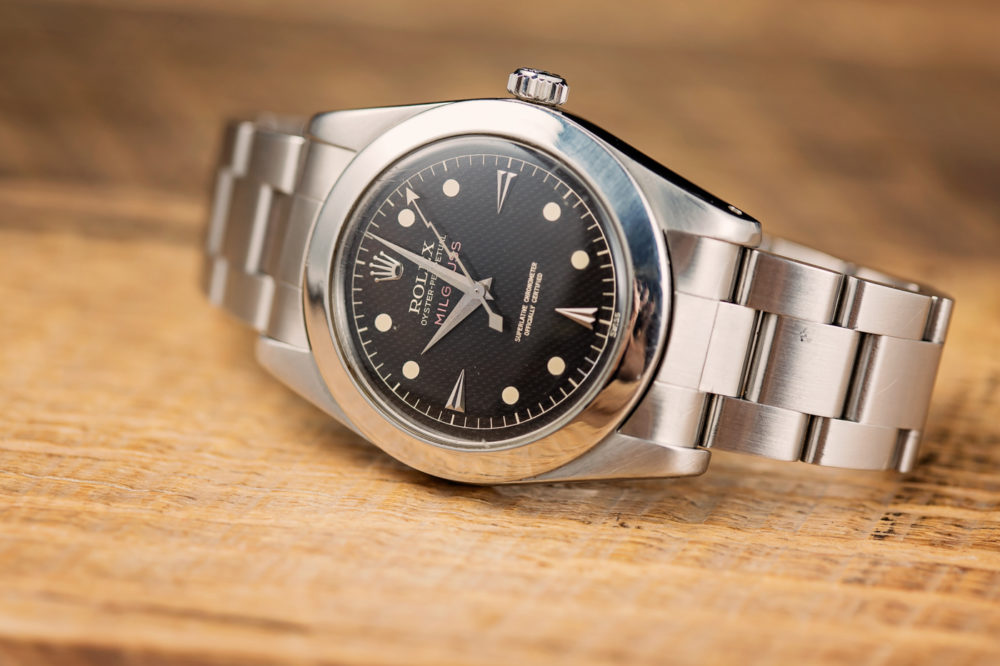 Given Rolex’s tool watch heritage, it was only a matter of time before the company started manufacturing watches that were resistant to more than just moisture and dirt. As electricity proliferated throughout modern industry during the 1950s, some individuals found that the electromagnetic fields emitted by the equipment around them wreaked havoc on their wristwatches. Rolex embraced electricity’s presence and decided to create a watch that could withstand the conditions of the modern day work environment. In 1958, they released a watch that was prepared to deal with these new demands: the Rolex Milgauss, reference 6541.

The name Milgauss was created by combining two words: mille (Latin for a thousand) and gauss, the unit of measurement for magnetic forces. The name was intended to be an ever-present reminder that the watch was designed to withstand electromagnetic forces greater than 1,000 gauss. Rolex was able to achieve this feat by encasing the entire movement inside a Faraday cage. The Faraday cage (first invented by Michael Faraday in 1836) works by redistributing electromagnetic charges throughout the cage’s conducting material, thus neutralizing the effects present inside the cage.

The reference 6541 Rolex Milgauss came in two variations: one with a rotating bezel, featuring a minute scale (similar to that of a Submariner), and one with a large, fixed, flat bezel that was primarily intended for U.S. markets. Both versions were fitted with a lightning bolt-shaped seconds hand – an ever-present reminder of the Milgauss’s electromagnetic resilience. 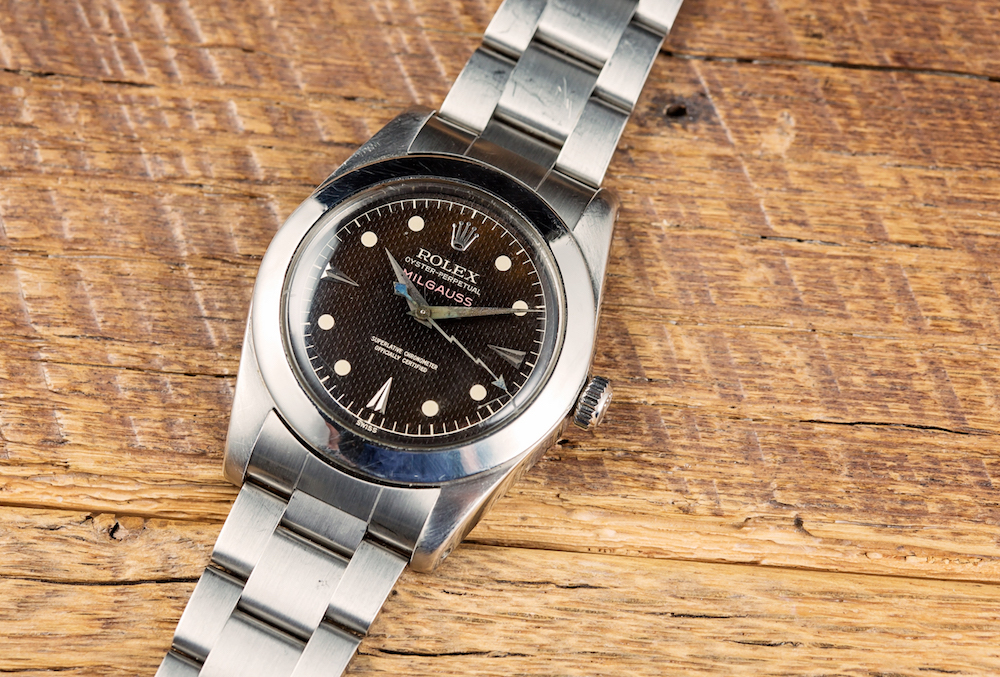 The rotating bezel variant of the reference 6541 is truly unique among the Milgauss line of watches, as it most closely resembles an early iteration of Rolex’s Submariner. However, the flat bezel version of the reference 6541 Rolex Milgauss marks the point in the watch line’s history where the famous electromagnetic timepiece started to take its final form.

Although it was originally invented for scientists and medical technicians working in the proximity of high-powered lab equipment, the reference 6541 Rolex Milgauss found an early following with members of the professional automobile-racing world. While it did not possess any features specifically tailored to racing, the Rolex Milgauss reference 6541’s sports-oriented style and lightning bolt-shaped seconds hand made it aesthetically fitting for those whose career revolved around the pursuit of speed. 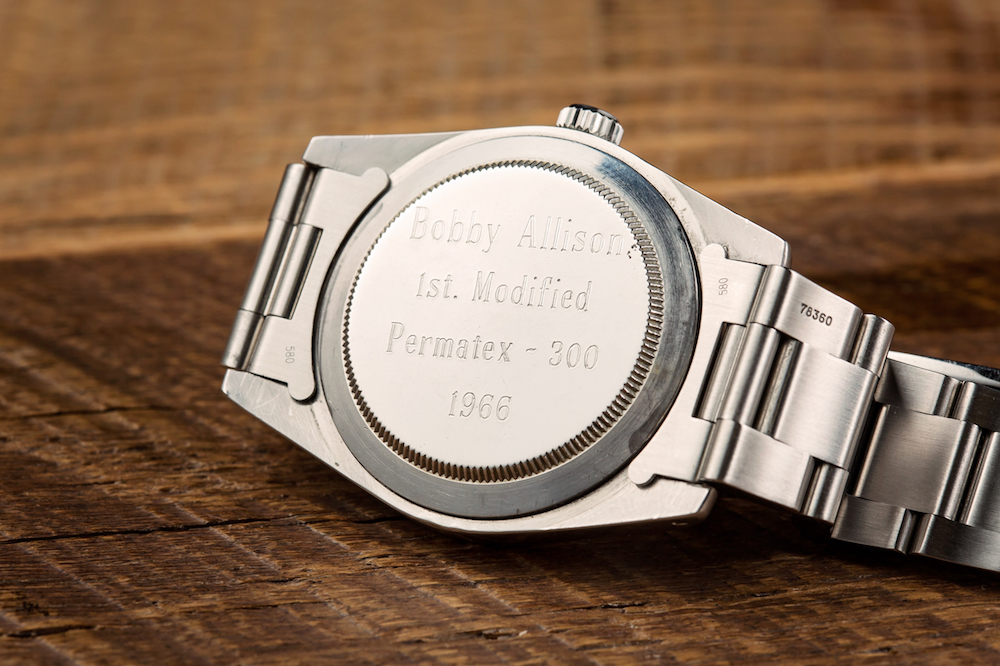 Among the various automobile racing personnel to take interest in the reference 6541 Rolex Milgauss was American professional stock car driver and owner, Bobby Allison. Born December 3rd, 1937 in Miami, Florida, Robert Arthur “Bobby” Allison entered his first race as a senior at Archbishop Curley-Notre Dame High School. As he was only 17 years old at the time, Allison required his parents’ permission in order to participate in the race. When his mother gave her reluctant approval, she believed it would only be for a single event; she had no idea that her son would go on to become one of NASCAR’s 50 greatest drivers of all time. Throughout his career, Bobby Allison earned 84 credited victories, including the 1983 Winston Cup championship; and the Daytona 500, which he won three separate times, in 1978, 1982, and 1988.

Bobby Allison was inducted into the Motorsports Hall of Fame in America in 1992, the International Motor Sports Hall of Fame in 1993, and the NASCAR Hall of Fame in 2011. Allison is one of only eight drivers in the history of the sport to have won what is unofficially known as a Career Grand Slam. This feat includes winning the sport’s four majors: the Daytona 500, the Winston 500 at Talladega, the Coca-Cola 600 at Charlotte, and the Southern 500 at Darlington. After moving full-time to the Grand National circuit in 1965. Bobby Allison earned his first career victory on June 2, 1966, at the Oxford Plains Speedway. To celebrate his win, Allison purchased a reference 6541 Rolex Milgauss, and gifted it to his crew chief as a thank you present. 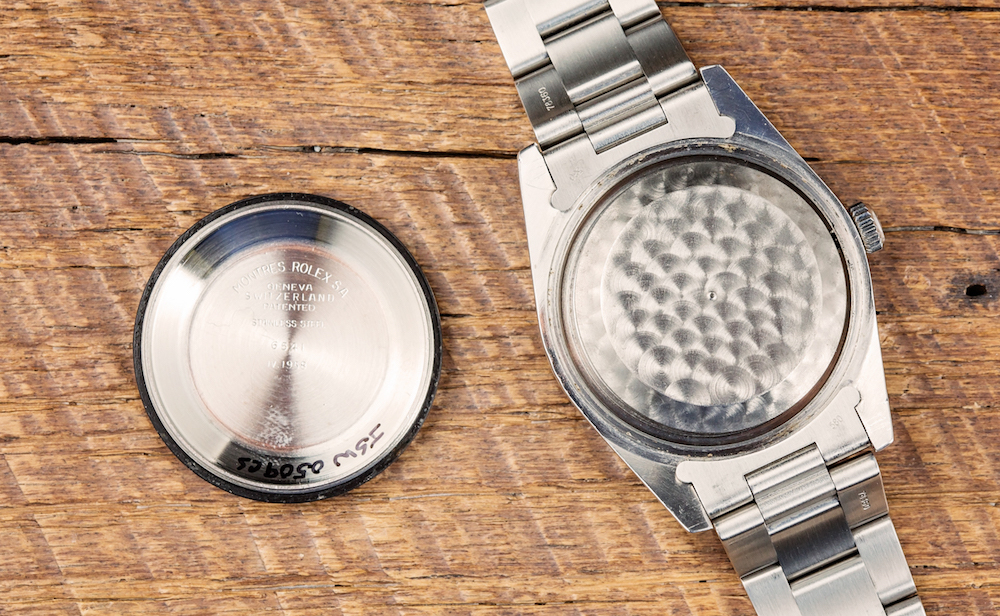 The reference 6541 Rolex Milgauss that Bobby Allison purchased was one of the flat bezel variants intended for U.S. markets. Its thick, chunky case, combined with its black, “honeycomb” dial and lightning bolt-shaped seconds hand made for a distinctly sporty look that perfectly complimented the high-speed, racing lifestyle.

Although the reference 6541 Rolex Milgauss found an unexpected audience in members of the professional automobile-racing world, its overall sales were somewhat disappointing. Just four years before the release of the Milgauss, Rolex introduced both the GMT-Master and Submariner lines of watches, which competed directly with the Rolex Milgauss and consequently hindered its sales. While it was impressive from a technological standpoint, relatively few people in 1958 actually required the anti-magnetic capabilities of the Rolex Milgauss, and as a result, sales were rather lackluster. However, like many other vintage Rolex watches, the Rolex Milgauss reference 6541’s poor initial sales are part of the reason it is now sought after by collectors today.

The reference 6541 Rolex Milgauss gifted by Bobby Allison to his crew chief has remained incredibly well preserved throughout the decades. The Milgauss name is printed in red on the dial surface; however, the lightning bolt-shaped seconds hand lacks the red tip that only appears on later production runs of the reference 6541. 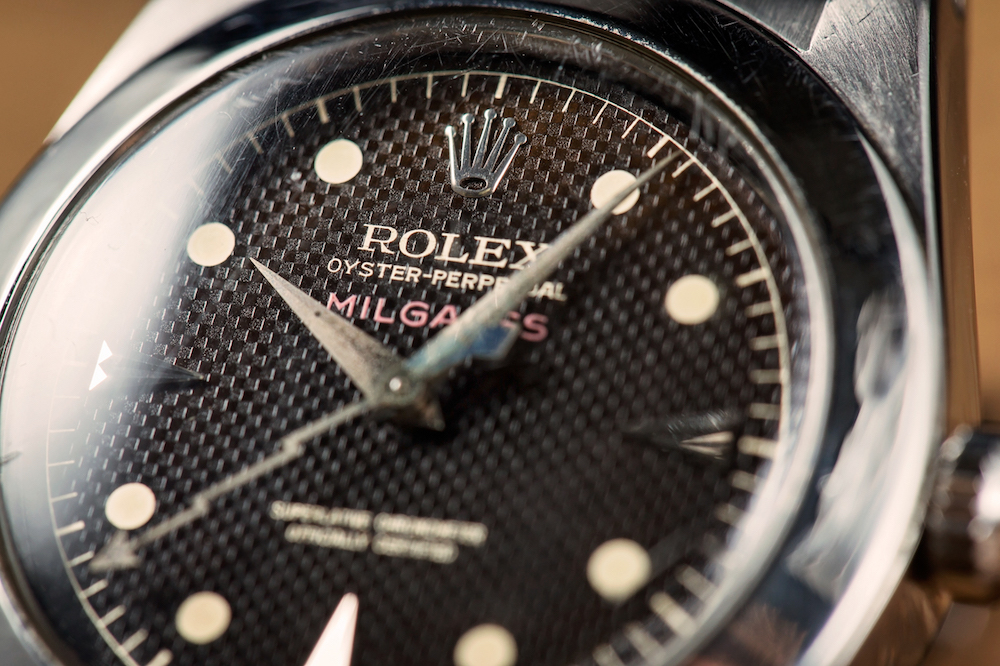 Over the years, the black “honeycomb” dial of this particular Rolex Milgauss has turned a tropical brown color, which perfectly compliments the reference 6541’s vintage, sports-forward style. Although its original rivet link bracelet has long since been replaced by a later-era Oyster model, the case and bezel of the watch have remained unpolished, and the lugs are still nice and thick, with the bevels intact.

Most unique to Allison’s reference 6541 Rolex Milgauss is the engraving on its case-back which reads, “Bobby Allison / 1st. Modified / Permatex – 300 / 1966.” While a number of Rolex Milgauss reference 6541s were owned by high-profile drivers of the automobile racing world, only one Milgauss bears such an engraving, forever connecting it to its legendary previous owner. The Milgauss is important within Rolex’s history because it represents the company’s ongoing commitment to producing timepieces that thrive in conditions where others cannot. As the first-ever Rolex Milgauss, the reference 6541 is a rare and valuable watch that occupies an important place in Rolex’s tool watch history. 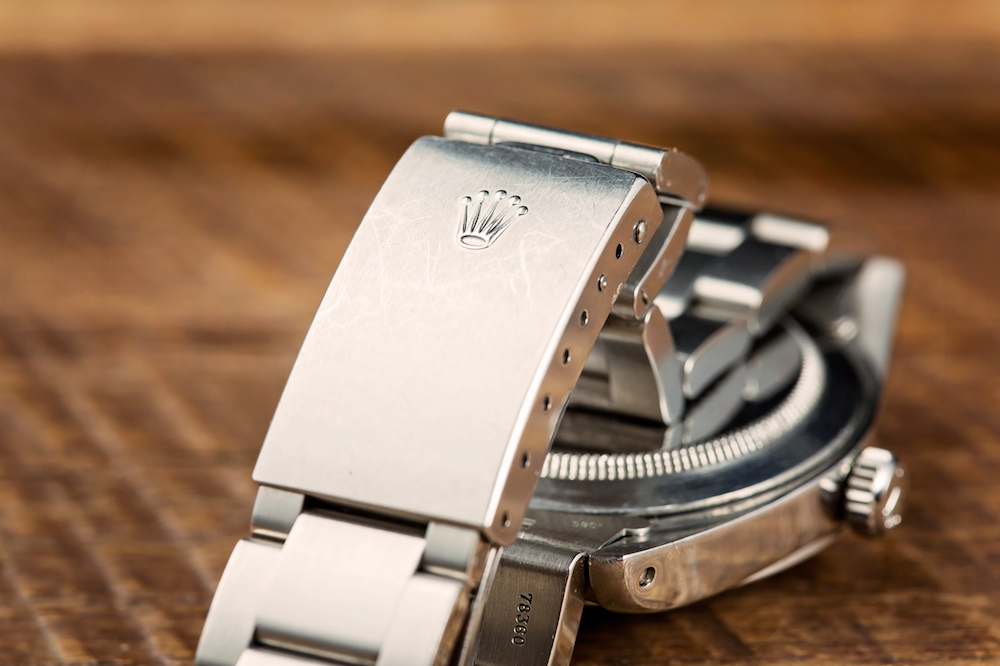 Part of what makes the Rolex Milgauss so interesting to collectors is that it largely missed its target demographic. Although it was initially intended for scientists and medical professionals, the reference 6541 Rolex Milgauss found its strongest following with members of the American professional automobile racing industry – not because it possessed complications or design elements specifically tailored racing, but rather because of its sporty visual appearance.

Some of history’s most famous and accomplished NASCAR drivers have purchased Rolex’s reference 6541 Rolex Milgauss. From Richard Petty to Bobby Allison and numerous more, Rolex’s watch for scientists found a home with racecar drivers. Whether it was purchased for personal use, or as a gift for a loyal crewmember or industry colleague, the reference 6541 Rolex Milgauss has a history that is inextricably (and entirely unintentionally) linked to the world of professional automobile racing.

Paul Altieri is founder of Bob’s Watches, the leading online destination for used Rolex watches where he created the Pre-owned Rolex Exchange Concept, which allows consumers to see both the buy and sell prices for a pre-owned watches, adding transparency to the market. Paul is also a watch collector and has many rare, collectible watches in his collection.
Advertising Message