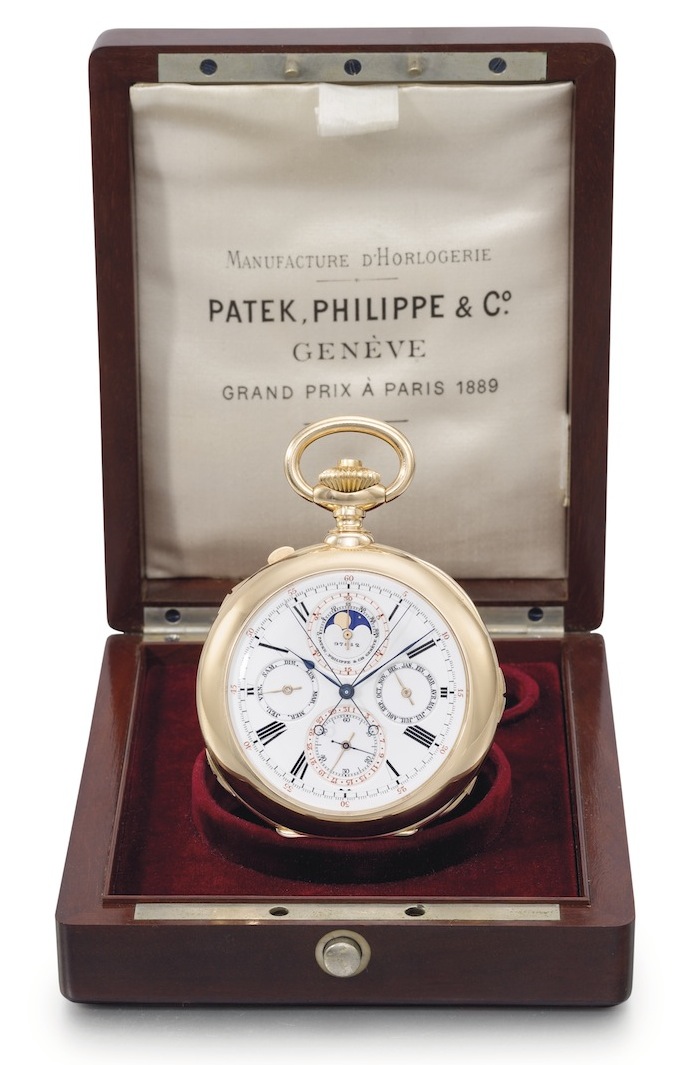 Here’s another incredibly complicated pocket watch by Patek Philippe — but this has something more going for it than your average sublimely complicated Patek: It is the first-ever made and recorded grand complication by the manufacture. Actually, a piece made in 1910 was broadly believed to have been the first, until this truly beautiful pocket watch was offered for auction by its owner. Made in 1898 and sold in 1900 for one of the greatest business leaders of the early 20th century America, Mr. Stephen S. Palmer.

This minute repeating, perpetual calendar, split-seconds chronograph watch, with grande and petite sonnerie and moon phases, is set in 18k pink gold and is among the most important watches Patek has ever made. As it can be read on the original receipt that was also included in the sale, Palmer purchased the piece in 1900 for a hefty sum of 6,000 Swiss francs. What has not been documented, but clearly shows from the condition of the watch, is that it has been locked away for more than a century in its original box. In summary, this is the finest example of all Grand Complications known today with it not only being the first ever made, but also the one in the most stellar condition. Considering the prices that other pieces fetched in our collection of super-rare Patek Philippe pieces, the fact that this piece was sold by Christie’s in June 2013 for $2.25 million tells us that someone got one hell of a deal. 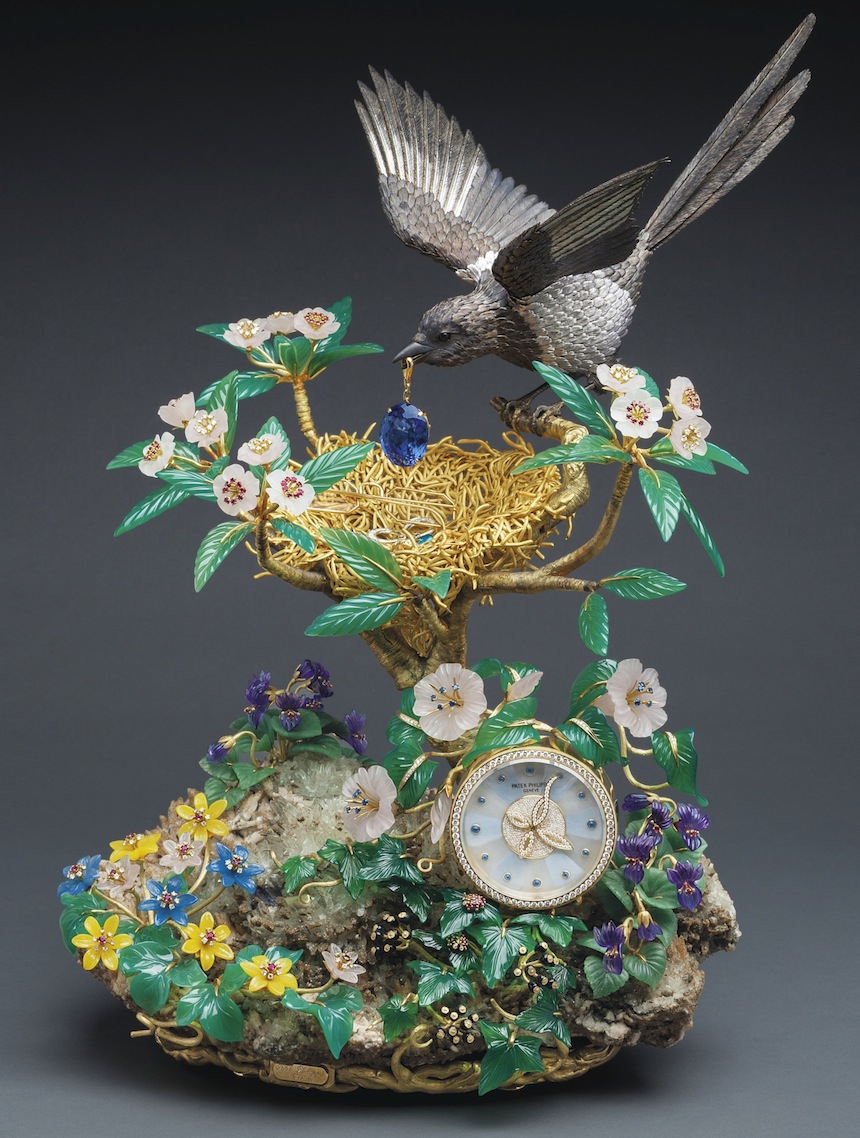 Built around a quartz movement, this unique Patek Philippe clock’s importance lies not in its mechanical complexity, but rather in its rarity and its intricate use of precious materials. Made in 1992, at the center of this presentation clock is a magpie bird, covered in two different shades of gold: in its beak is a 104.75-carat, oval-shaped tanzanite gem that it looks about to place into its yellow gold nest. The tree, sculpted from calcite, onyx, and agate, is resting on a substantial piece of rock crystal, that was further adorned with yellow, white, blue and pink agate flowers and green agate foliage. All are set with diamonds, rubies and amethyst petals.

As if all this wasn’t enough for what appears to be the luckiest and greediest magpies in all of human history, the bird’s nest contains diamond-set treasures, including a pair of scissors, spectacles, thimble, ruby-set ring and enamel-capped safety pin. Adorned with dozens of flowers, truly intricate, hand-crafted details, 24.95 carats of diamonds and 13.17 carats of rubies, this unique clock had a high estimate of $640,000. A seemingly high price, but one that this piece surpassed with surprising ease, ultimately costing more than $2.3 million for its new owner. 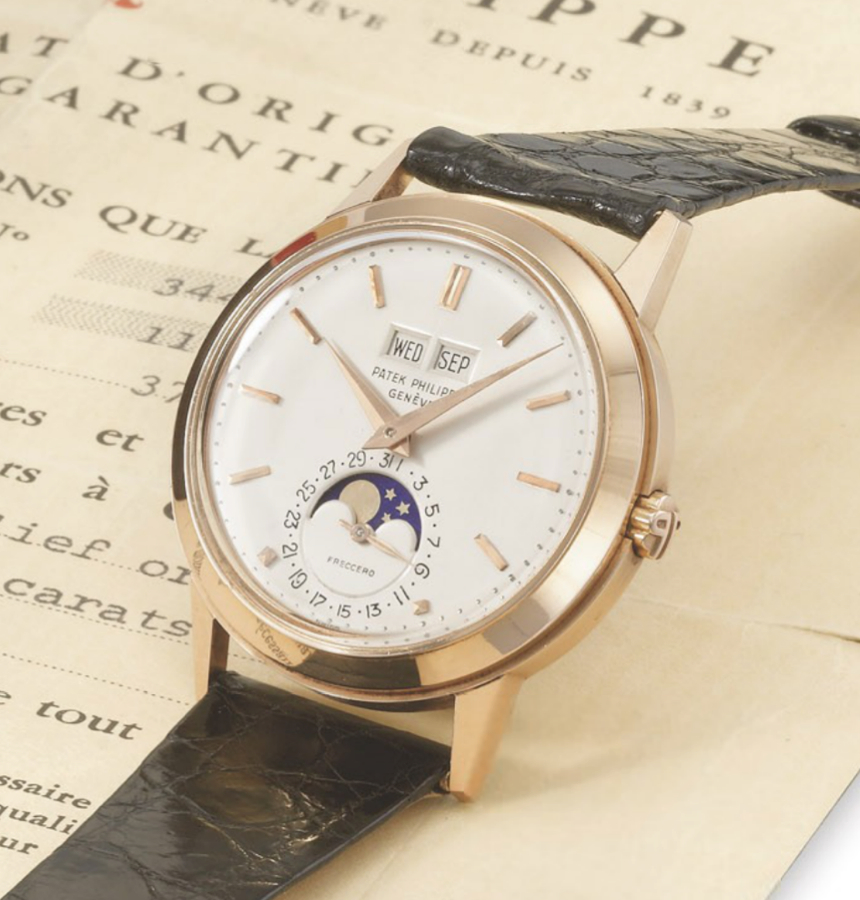 Launched in 1962, the Patek Philippe Reference 3448 was the first automatic perpetual calendar wristwatch ever made by any manufacture. A total of 586 were produced over nearly two decades, up until 1981, when Patek retired the 3448 to replace it with a slightly updated version referred to as 3450. Sold in 1968, this particular piece ended up with a collector who apparently had a very clear vision of what this watch will be worth decades later. So he locked it away in a safe and kept it there with the original box and certificates. 43 years later, as if nothing had happened, this 3448 was offered for auction at Christie’s, straight from the original owner. The watch was in incredibly fine and original condition with a sharp and unaltered case, original and rare “PP” crown and an un-restored dial.

Though the story of this 3448 did not end right there. As per the trends of the era, most iterations of this model were cased in 18k yellow gold, some were in white gold and only two were made in platinum. This piece, however, is in pink gold: a treat so rare that no archivist, auctioneer or collector knew of its existence until it was listed for auction. It is the only Reference 3448 known in this material. Once all this is taken into account, it should come as no surprise that Patek collectors had their pants and paddles on fire, as bids quickly surpassed the 500,000 to 1 million Swiss Franc estimate. Ultimately, this one-of-a-kind watch finally sold for 2.1 million francs (or $2.3 million), paying handsomely for the farseeing collector who had been nursing it for more than four decades. 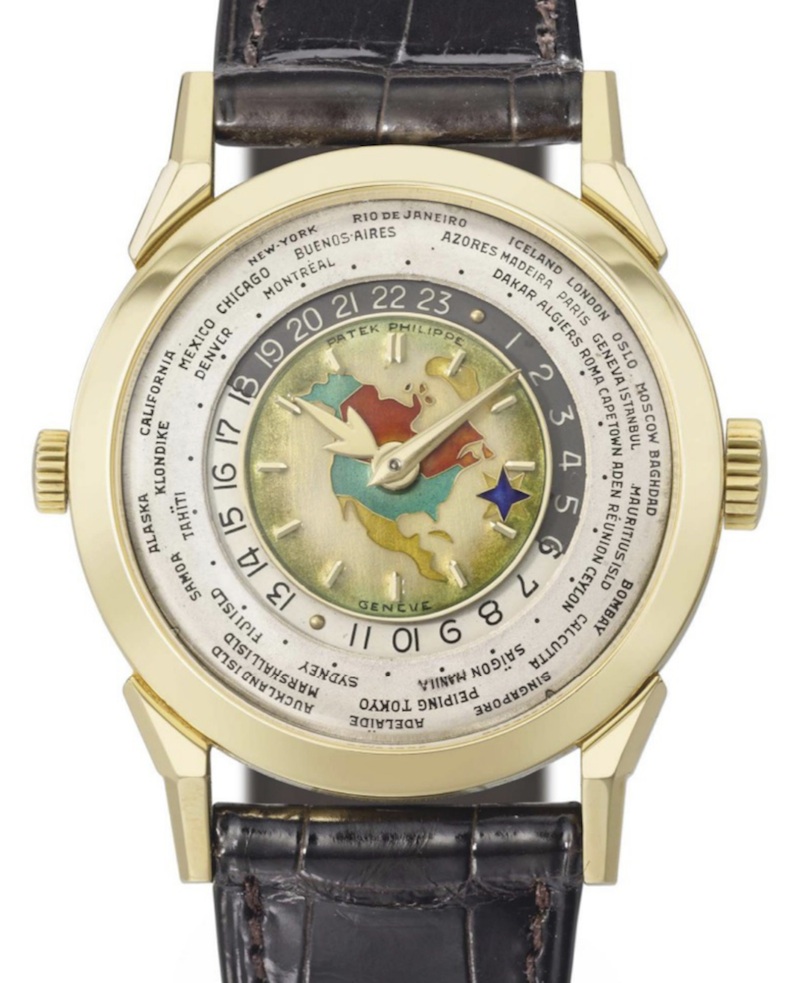 Following the previous array of incredibly complicated, extremely important and often made-to-order watches on our list, we have come to one that just stands out from the rest in a unique way. It is the reference 2523 World Time watch from 1955. This is a piece that carried no unearthly importance upon its debut. The earth did not shake near Geneva upon its completion and there was no wealthy collector overseas, eagerly anticipating the moment of receiving it. It was much more of an odd piece than a practically useful one, and hence it had not received instant recognition or success. It has to be noted though that at the time of its creation in the middle of the 1950’s intercontinental business trips were much less common than they are today, which rendered this watch less desirable than its similarly expensive counterparts which were equipped with other useful complications as judged by contemporary standards. In any event the original Patek Philippe World Timer is a complicated piece unto itself.

The ingenious world time disc-system was invented by Louis Cottier in 1931 was later implemented by Patek, Vacheron Constantin, Rolex, and others. As times have changed, not only did this complication become one of the most popular useful functions, but the reference 2523 has also become much more appreciated among collectors, as seen by the seven figure prices these world timers consistently achieve at auctions. This version, with a hand-painted map of North America at the center of its dial, was sold by Christie’s in 2012 for nearly $3 million. 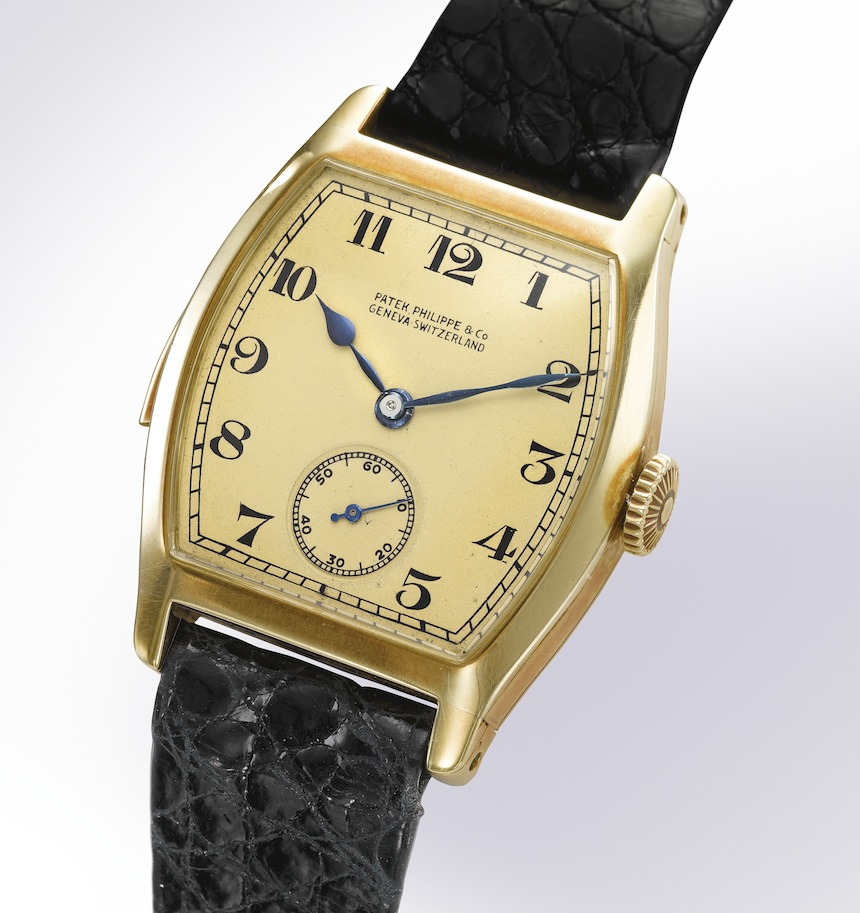 In addition to the Supercomplication pocket watch, here is another piece made by Patek Philippe, for Henry Graves Jr. Measuring in at only 30.5 mm in diameter, this small, tonneau-shaped watch has a lot more going for it than its simple looks would suggest. To begin with, it is the first wristwatch that he commissioned Patek Philippe to make for him. As per the manufacture’s archives, this watch contains a minute repeater movement that was made in 1895, and was actually cased much later, in 1927, before it was sold to its original owner Graves Jr. It is one of four wristwatches that Patek delivered to him and it is the only one that is cased in yellow gold. The case back is engraved with the Graves’ coat of arms and motto, Esse Quam Videri: “to be rather than to seem.” That the elaborate movement in this watch has been hidden behind a solid case back is just another way of showing that Graves Jr. took the family motto rather seriously.

Minute repeaters by Patek (and by other brands as well) remain among the most desirable and technically most challenging watches to make. This was all the more true at the time when this piece was manufactured. Production of watches with this complication remains low for their complexity and the small number of master watchmakers that are able to actually assemble them. Bear in mind that this piece is among some of the first repeater wristwatches made by Patek Philippe. Further, it was owned by someone who had been one of the most important Patek collectors ever. This should help explain the price of nearly $3 million that was paid for this piece in 2012 at a Sotheby’s auction.