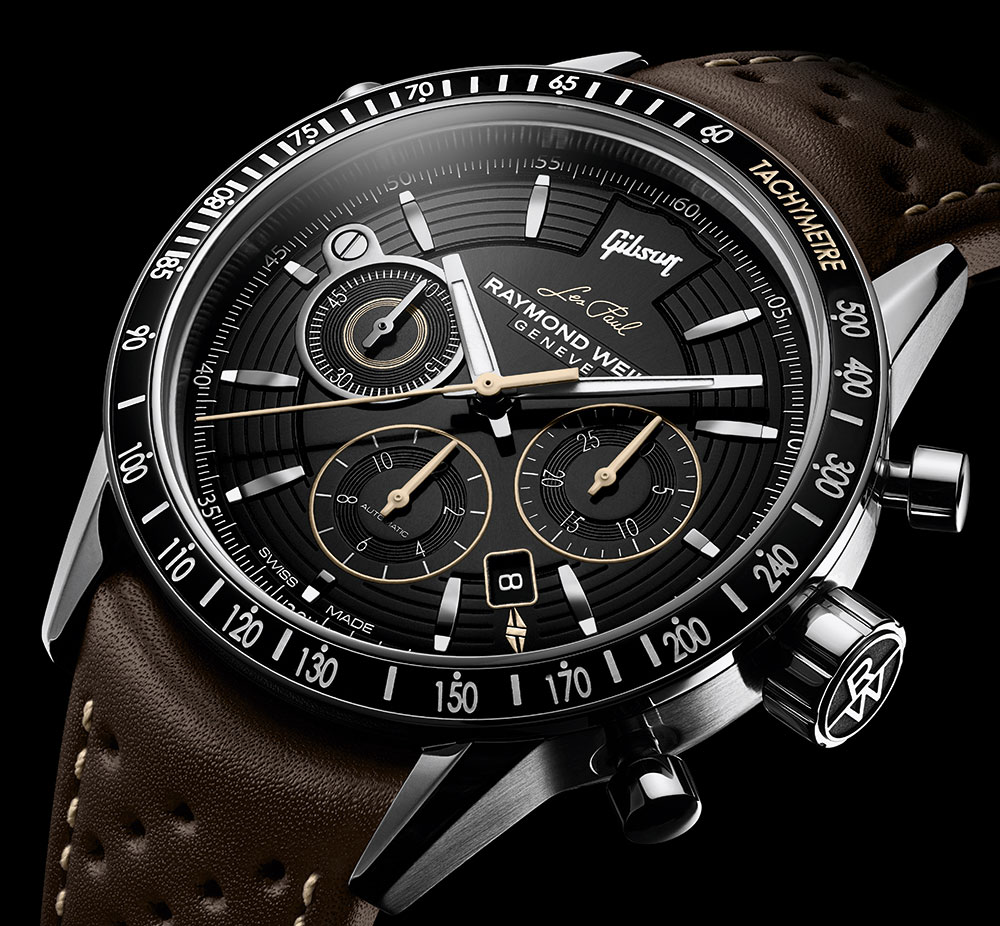 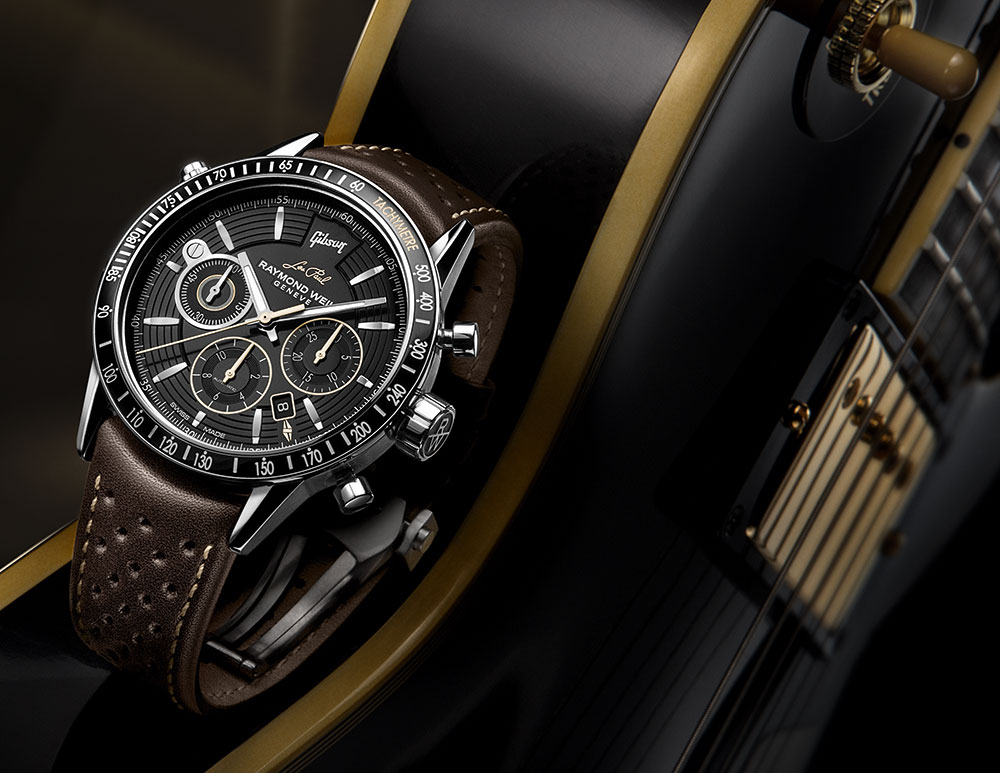 Gibson is a well-reputed name in the world of guitars and is known across the globe especially for their electric guitars. Though the Gibson guitar catalog provides a wide array of guitar models to choose from, one of the more sought-after collections is the Les Paul Gibson, and Swiss watchmaker Raymond Weil are paying tribute to the downright iconic guitar through their Baselworld release of the Raymond Weil Chronograph Gibson Les Paul watch. 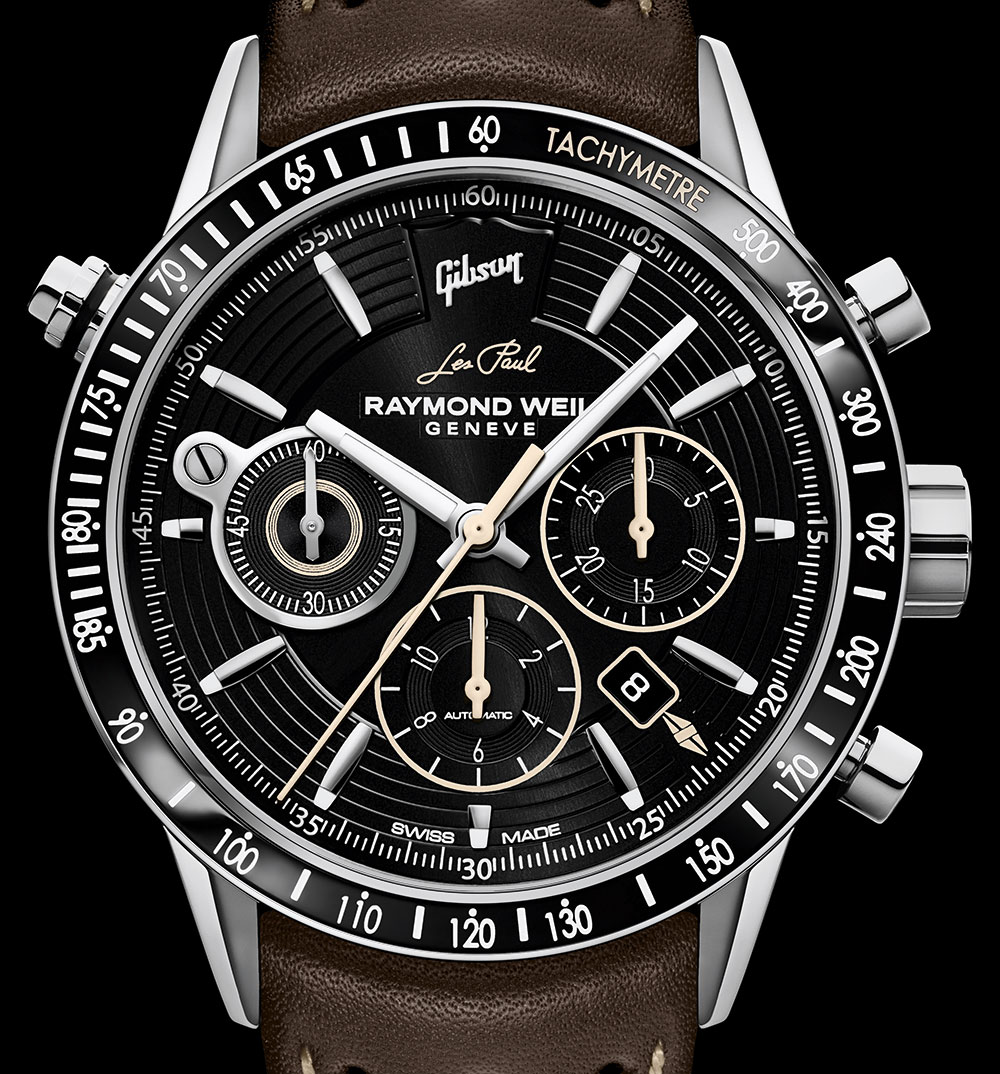 It’s unlikely that many are unfamiliar with the cultural significance of this famous guitar. Even younger readers should recognize names like Paul McCartney, Eric Clapton, Jimmy Page, and Pete Townshend who represent just a few of those who made their music on a Gibson Les Paul. As Raymond Weil has made musically inspired watches part of their brand personality, such as we have previously seen in the Nabucco Cello Tourbillon watch and the Beatles watch, the Raymond Weil Freelancer Chronograph Gibson Les Paul fits right in. 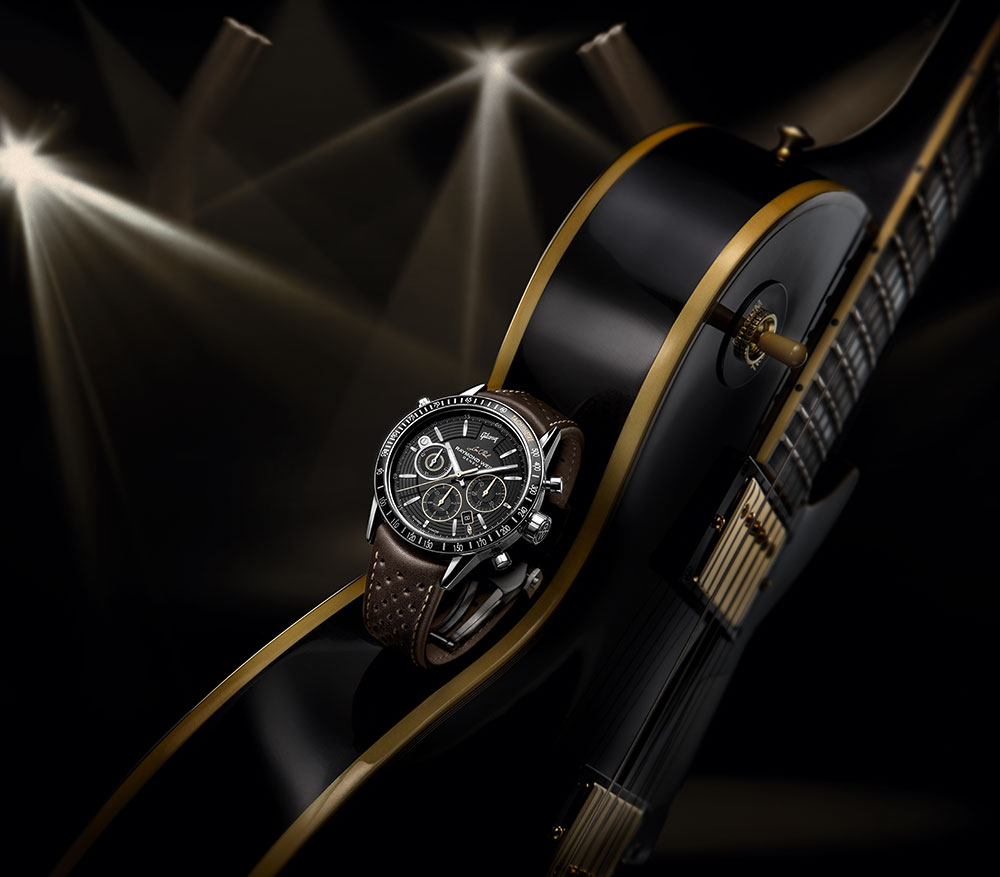 The black dial on the Raymond Weil Freelancer Chronograph Gibson Les Paul watch has a three-subdial layout and some attractive design elements inspired by a Les Paul Gibson giving the watch a unique appeal. The hour track has been presented here using a circular motif which closely resembles the fretboard of a guitar with its six strings and gives the dial a sense of depth and some visual dynamism. The applied hour markers represent the frets, and the shape at the 12 o’clock position represents a guitar headstock with the Gibson brand name, followed by the Les Paul signature just below it. The chronograph functions on the Raymond Weil Freelancer Chronograph Gibson Les Paul include a 30-minute counter at 3, a 12-hour counter at 6, and a running seconds counter at 9 o’clock. All the subdials have some fine concentric circular patterns, along with some golden highlights, mirroring the color tone of the golden border which runs across the body of certain Gibson Les Paul models. 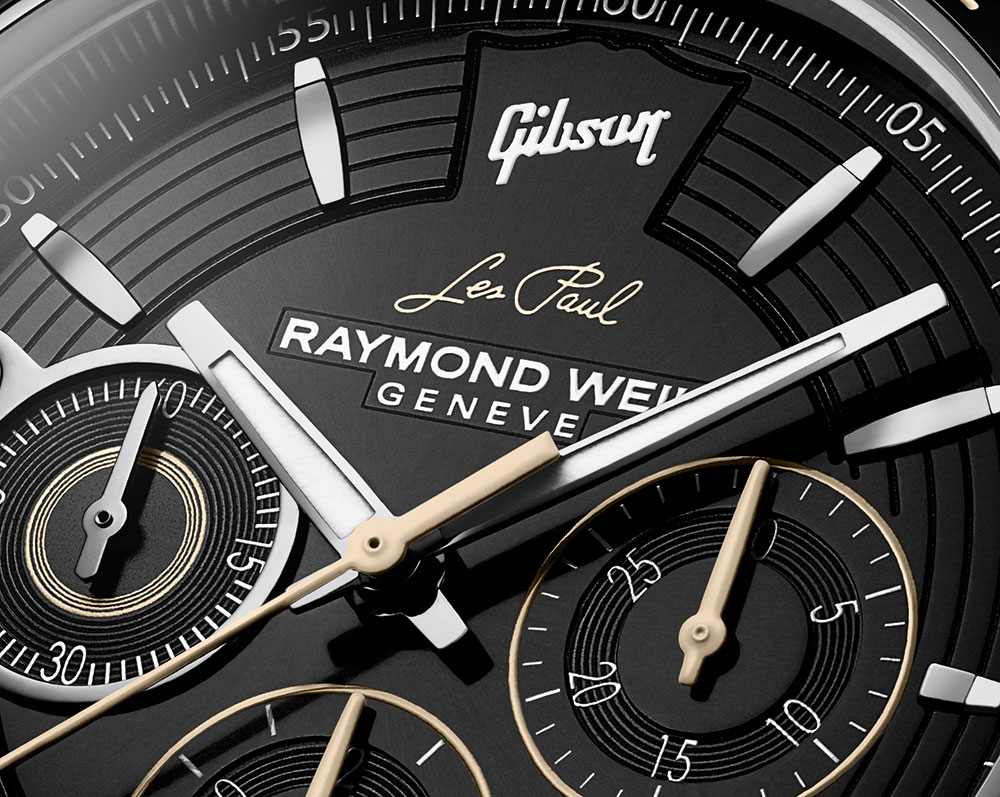 The 43.5mm stainless steel case on this watch is an interesting mix of brushed and polished surfaces and offers a water-resistance of 100m. The right side of the case is flanked by a set of polished chronograph pushers, along with the signed screw-down crown at 3, whereas the left side of the case hosts a single pusher at 10 o’clock used to set the date. The case is topped with a steel tachymeter bezel which has a glossy black PVD coating, resembling the black lacquer finish on the body of a popular Les Paul model, the “Black Bird.” 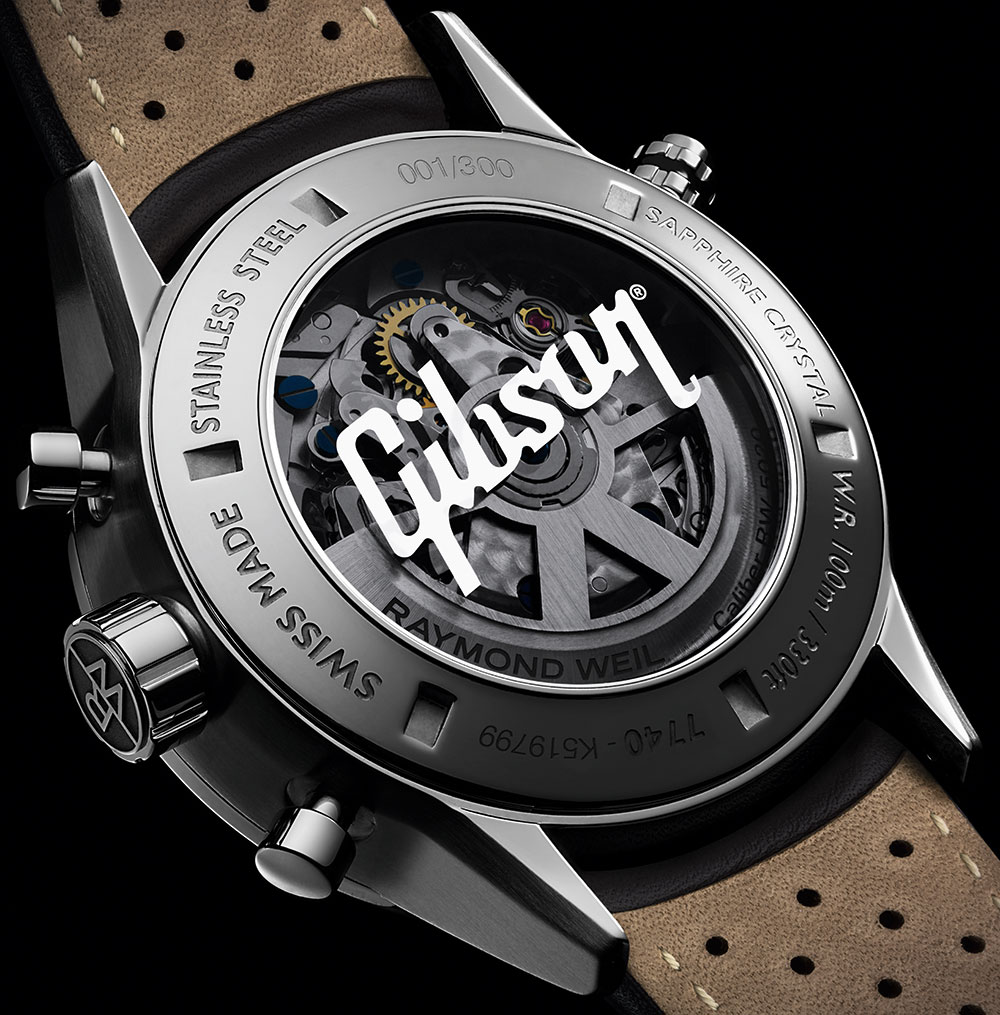 The watch is powered by the Raymond Weil RW5010 chronograph movement which is basically a Valjoux 7753 with a customized Raymond Weil rotor. The movement beats at a frequency of 28,800bph, and offers a power reserve of 46 hours. The movement can be viewed from the sapphire crystal exhibition caseback, which is also stamped with the Gibson logo in white. Although the Gibson branding looks cool, in my opinion, it does hinder the view of movement a little and would have been better off being engraved on the case back itself making it possible to have a better view of the movement. 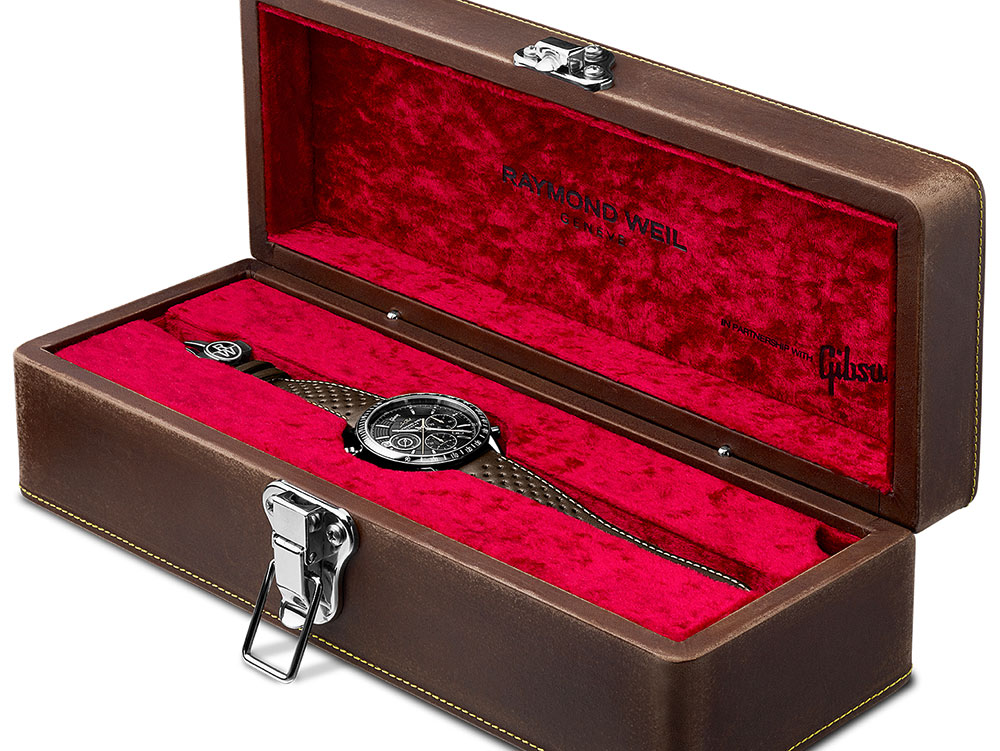 The Raymond Weil Freelancer Chronograph Gibson Les Paul is a watch for rock ‘n’ roll enthusiasts who love the music the Les Paul is associated with and want to keep the spirit of the instrument alive on their wrist. The watch comes on brown calf leather strap and will be produced in a limited quantity of 300 pieces with individual serial numbers engraved on the caseback. The watch will be presented in a special presentation box inspired by the Gibson guitar case and will retail at a price of $3,195. raymond-weil.com