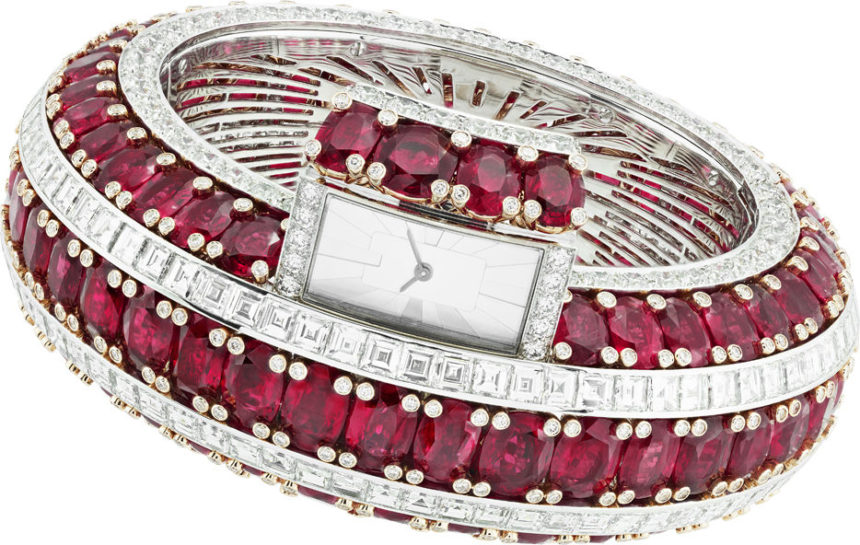 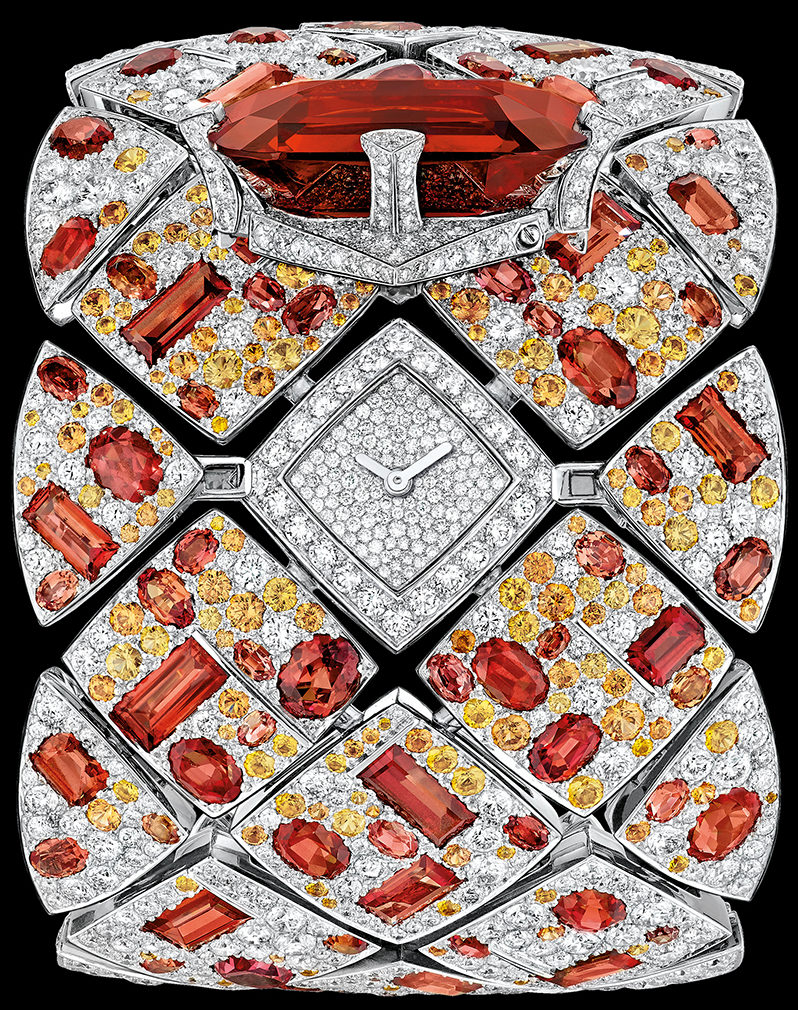 The Chanel Signature Grenat is dominated by a 39.9 carat garnet.

In this era of what some might call excessive dial decoration, several brands including Chanel, Graff, and Van Cleef & Arpels, are actually covering up their watch dials. The “secret watch” is a ladies’ jewelry watch with a cover that moves via hinges or springs to hide or reveal the dial by activating a release somewhere on the watch.

The secret watch was invented during the roaring ’20s, when it was more important for a lady to be luxuriously adorned than it was for her to know the time of day. Dials were hidden behind hinged or swiveling covers that were elaborately gem-set, engraved, or enameled. This may have been partly to protect the glass over the dial before the days of sapphire crystals, just as men’s pocket watches were covered with case fronts that were often elaborately decorated. Secret watches were some of the first wristwatches ever made. 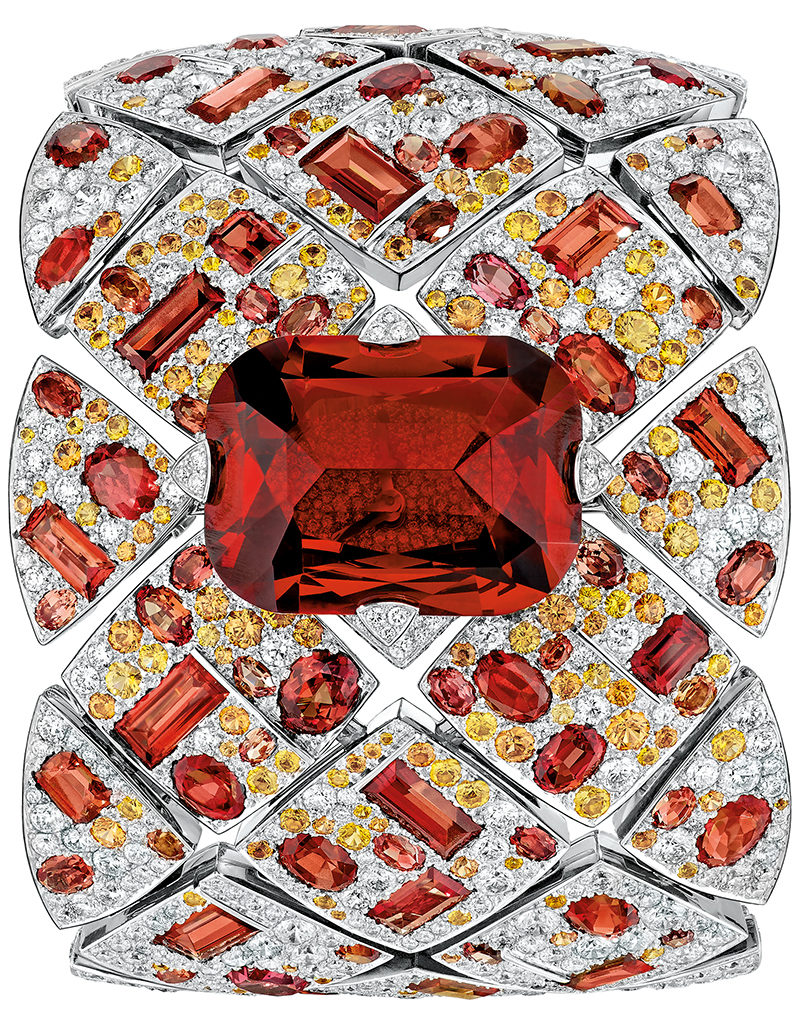 Covers went out of style with the beginning of mass production of timepieces and improving materials. By the 1950s, the wristwatch had become a common tool for everyday life, and with the advent of quartz in the 1970s, almost everyone wore a timepiece. Today, with watches fulfilling a role that is maybe one part functional and two parts decorative, the covered watch – mainly the ladies’ secret watch – is back in style at the high end. The revival is evidence that we have come full circle to another golden age of adornment, with highly decorated and gem-set pieces. Many women own a sensible daytime watch and at least one elite complication, but among those who can afford it, it is increasingly essential to have a watch that is more jewelry than timepiece.

Today, the masters of the art include jewelry companies that have also mastered watchmaking. Putting the two capabilities together gives them an edge, and has resulted in some modern-day masterpieces. As one of the world’s top diamond companies, Graff approaches its high-jewelry watches from a jeweler’s point of view, evident in two new secret watches this year. The Graff Princess Butterfly is a masterpiece of gem-setting, with tapered baguette diamonds on the bezel of the dial, and tapered baguette and pave sapphires set on the butterfly wings that form the cover of the watch. 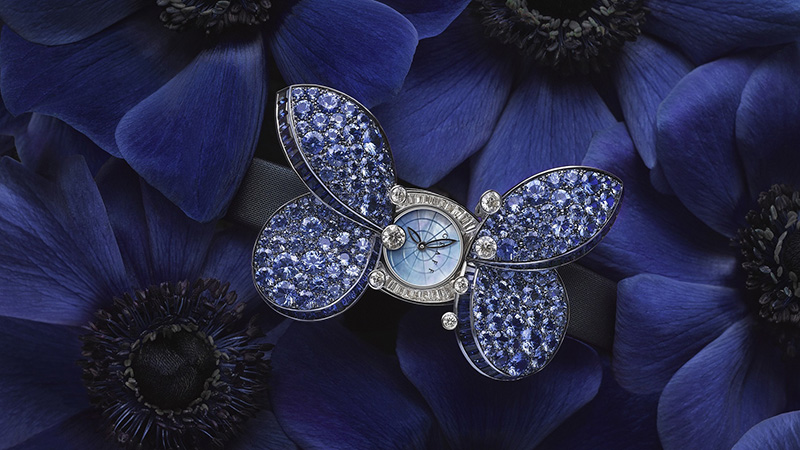 They spring open by pushing on each end of the center row of diamonds, which depicts the body of the butterfly. It is set with 9.29 carats of sapphire and 5.61 carats of diamonds, and priced at $135,000 and up, depending on the gemstones used. 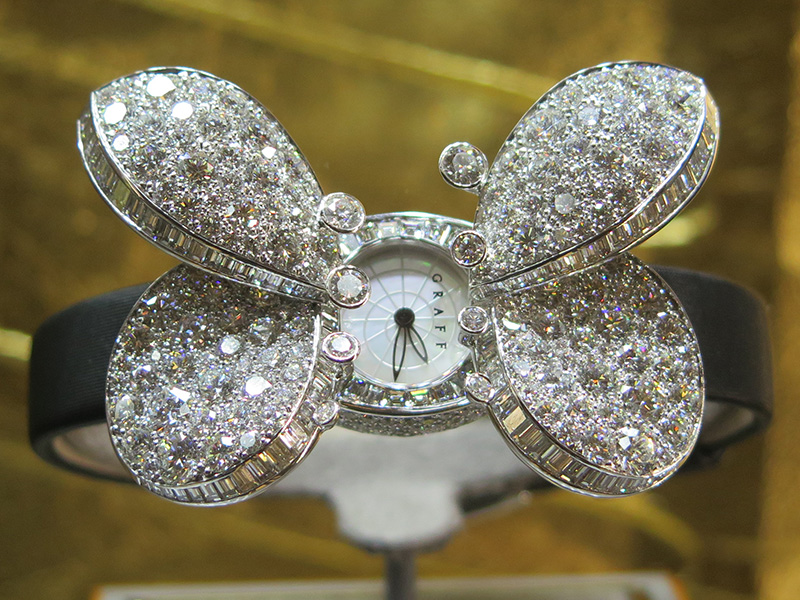 The Graff Swan Secret watch, also introduced this year, is fitted with a cover that is hinged to swivel outwards to reveal the time and then swivel back in to click into place. It is set with 6.22 carats of diamonds, and priced on request only. 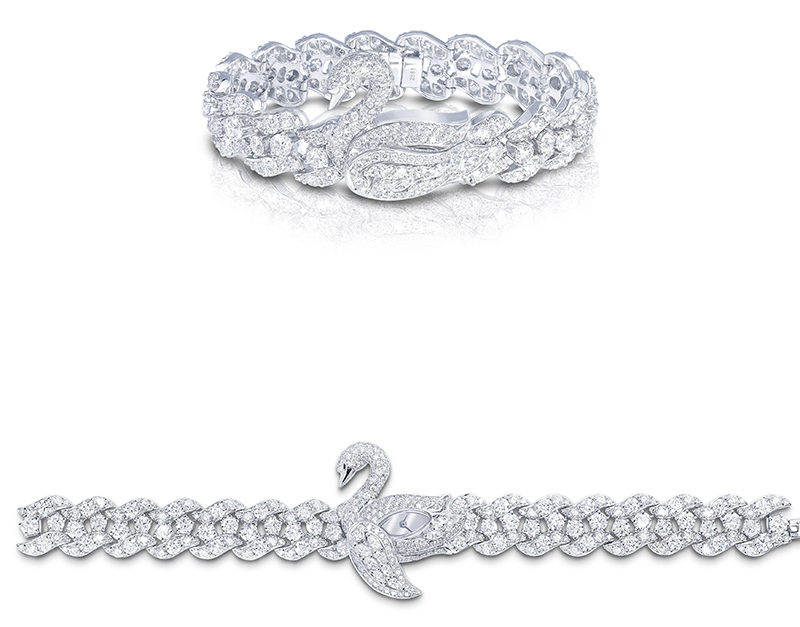 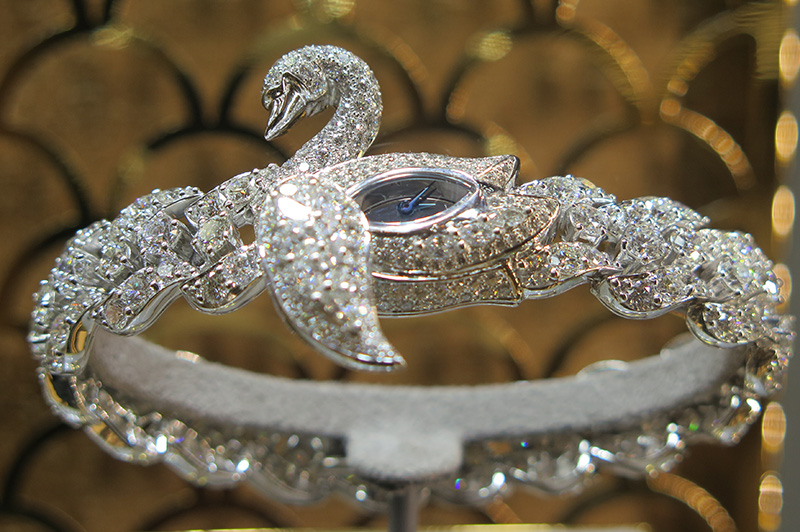 Chanel has been making jewelry watches since Coco Chanel included them in her first jewelry collection circa 1932. The four cuff-style pieces in this year’s Les Éternelles de Chanel collection are comprised of links that mimic the brand’s iconic quilted motif. Each watch is highlighted by a massive center gemstone set on a hinged frame to serve as the dial cover. The Chanel Signature Morganite is set with a spectacular 43.6-carat cushion-cut morganite, surrounded by 18k gold cushion shaped links that are set with 953 diamonds totaling 103.8 carats. 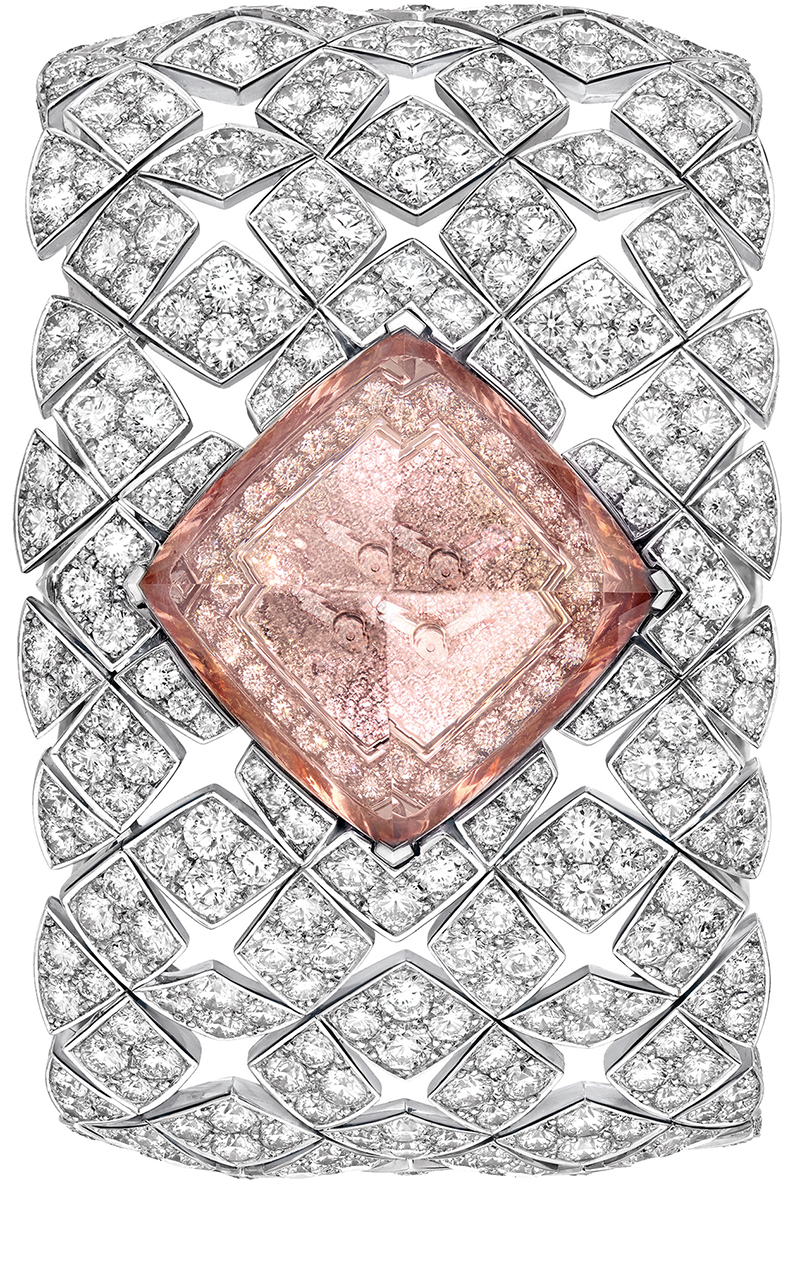 The Chanel Signature Morganite is set with a spectacular 43.6-carat cushion-cut morganite. 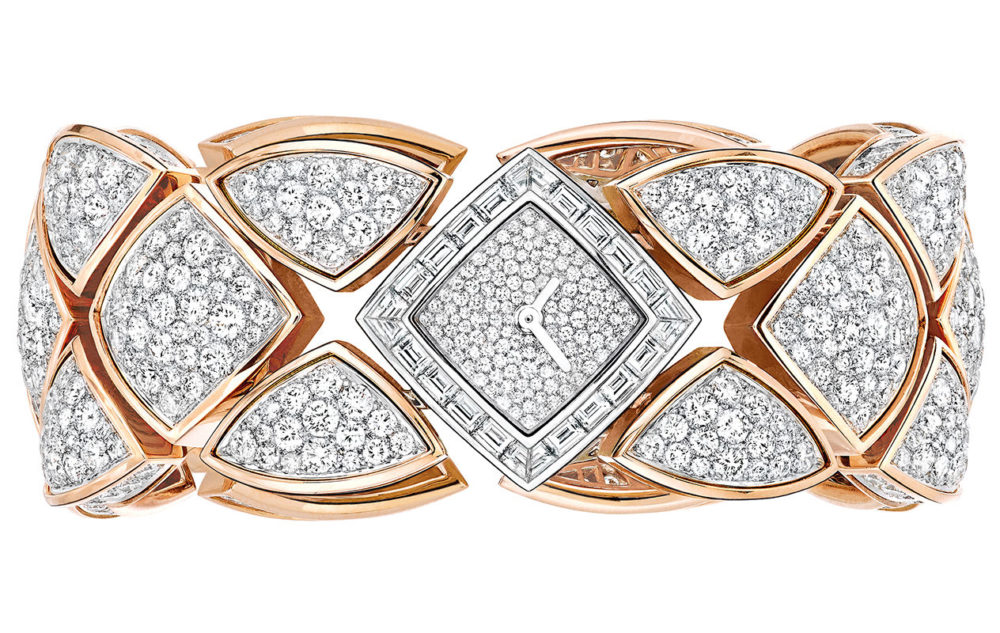 The Chanel Signature Saphir is centered by a 17.2-carat cushion-cut Padparadscha sapphire. 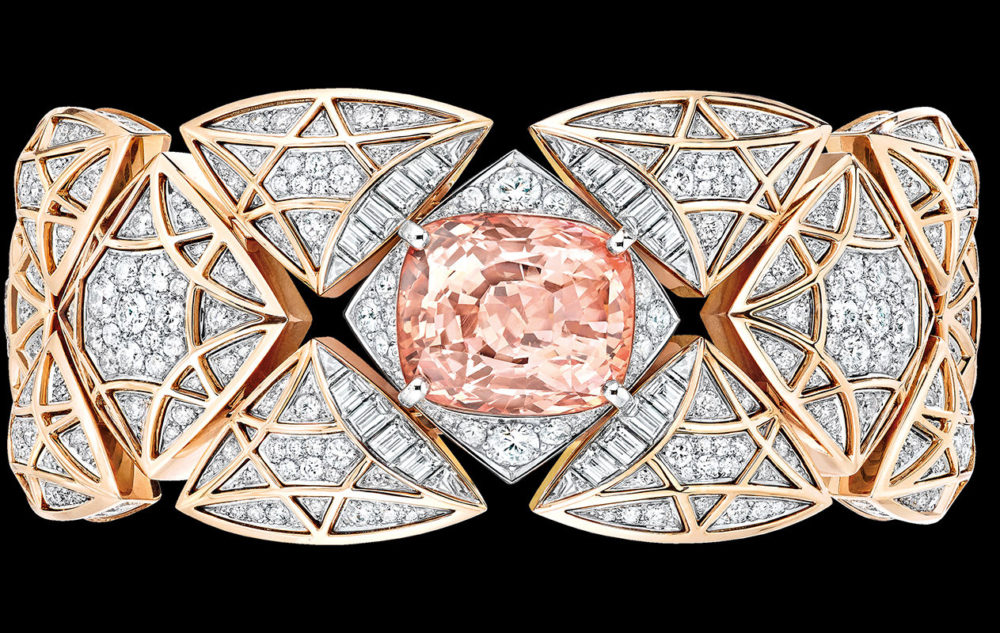 The Chanel Signature Saphir is centered by a 17.2-carat cushion-cut Padparadscha sapphire.

The Chanel Signature Grenat is dominated by a beautiful, highly saturated garnet of 39.9 carats, also cut in a cushion shape. It is surrounded by 2.5 carats of yellow diamonds, 30.4 carats of orange sapphires, 2.5 carats of spessartite garnets and 78.9 carats of diamonds. What can I say about these pieces except that they are just spectacular? My favorite is the garnet because of the dynamic colors, which you really want on a cuff bracelet, which is the go-to piece of jewelry for showing color. There is also an Eternelles Diamant, with a 5.2-carat rose-cut diamond, 3 carats of triangle-cut diamonds and 30 carats of round brilliant-cut diamonds. Prices range from $555,000 – $1,292,000.

Van Cleef & Arpels can always be counted on to create some kind of special movement or mechanism to add a movable dynamic to its decorative watches. This year it is a secret watch with a case that is pulled out like a drawer from the side a cuff bracelet. The Van Cleef Ruby is made from an exceptional batch of 115 Mozambique rubies weighing a total of 151.25 carats. They are cut in slight variations, from oval to cushion, and arranged in three rows in an 18k white gold bangle-style cuff. Each row is separated by round and square diamonds. The watch is hidden in a secret drawer, opened by delicately pressing on the rubies. It slides in and out to a tolerance of a hundredth of a millimeter, emerging just under the stone’s girdles without touching them. It took more than a year to create this piece, and it is sure to be over a million dollars (but official pricing is not disclosed). 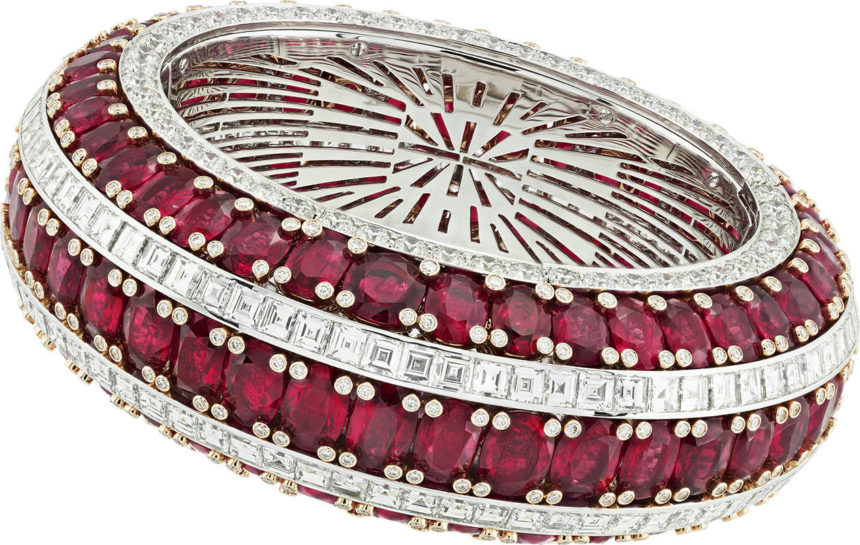 The movements in these and most other secret watches are quartz, but let’s face it, these statement pieces are not about the technical prowess of the movements; they are a different kind of masterpiece altogether. Jeweled secret watches are complicated in their own way, what with elaborate hinging and springed mechanisms and rare, custom-cut gemstones set to fine tolerances. They are certainly as worthy of conversation and admiration as a flying tourbillon or a high-frequency chronograph. Plus, if you really need to, you can use them to tell the time.