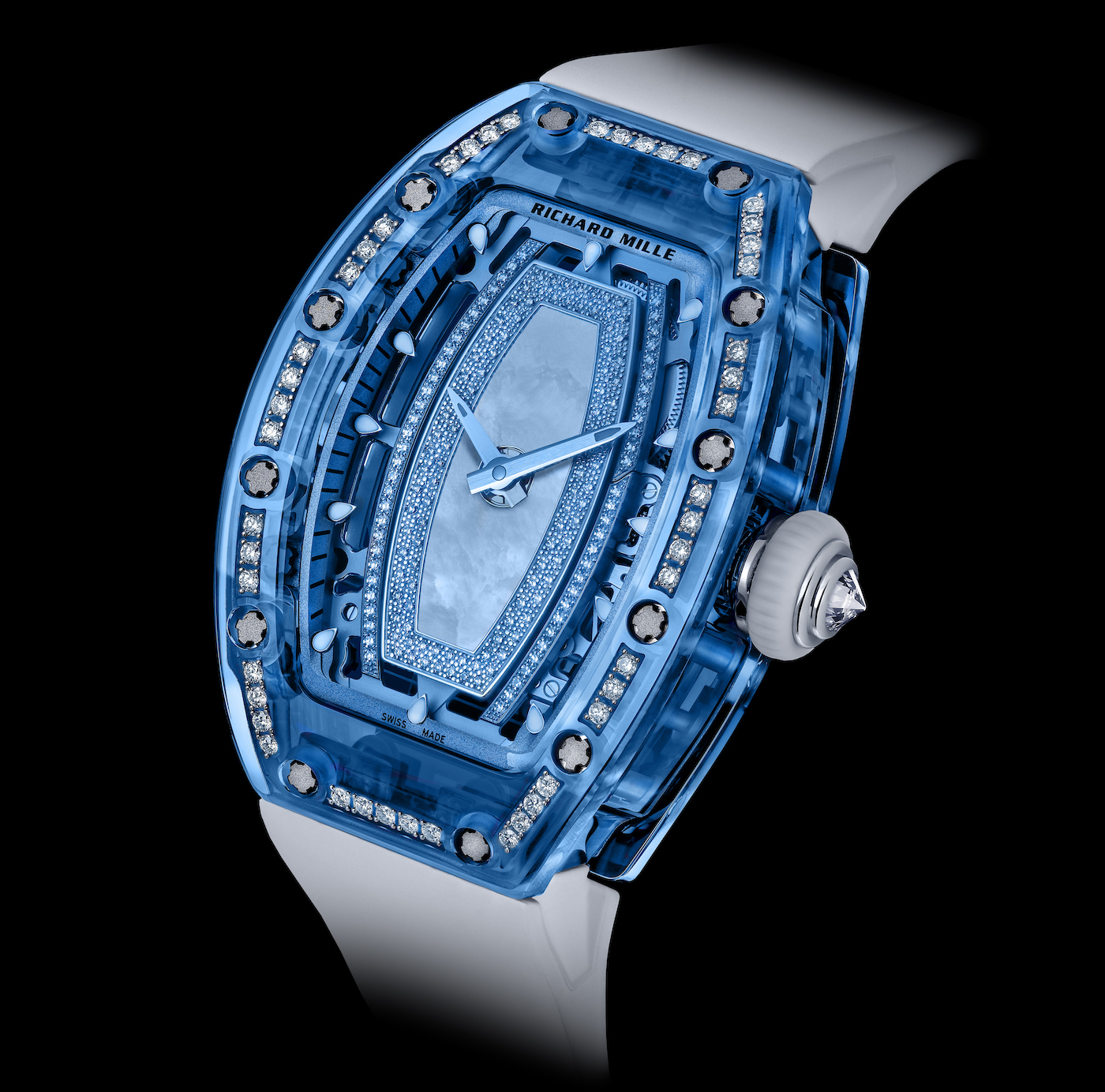 In advance of Baselworld 2019, Richard Mille has unveiled a new take on its unique womens’ sapphire cases. The Richard Mille RM 07-02 comes is being made in three different colors. Colored sapphire cases really make the most of of sapphire’s versatility, and the colors chosen for this project are pink, blue, and green. At this time, we only have an image of the blue case, but we will share the rest when they are provided. While this isn’t the first sapphire case Richard Mille has produced, it’s the first time we see diamonds set in the material for the brand’s women’s watches.

Creating these cases is no easy task, as each one is machined from a solid block of sapphire. According to the brand, this takes 40 days, not including the examination of the structure of the sapphire to ensure it is chromatically consistent. Compared to the Carbon TPT so commonly used by Richard Mille, or even their ceramics, this takes nearly twice the time to machine, examine, and produce. Part of the lengthy process includes carving out 12 alcoves for red or gray gold prongs that hold a series of diamonds around the perimeter of the case. But don’t be discouraged — Richard Mille’s signature case screws are still blatantly pronounced, as well. As for the crown, unlike the brand’s 2015 release of a similar RM 07-02, the new versions include a diamond-esque shape and appearance that adds to the overall theme of the watch.

Each dial features a unique stone, based on the color of the case. For instance, the blue sapphire case here features a mother-of-pearl stone, while the green case utilizes nephrite, and the pink uses jasper. While we don’t have images of these, I feel that the variation in the stones, and even the stones’ texture, will give each case hue its own unique look that spans further than the color of the sapphire.

The entire case, according to the brand, is designed to draw attention to the movement inside. While the press release doesn’t specify a specific movement, it’s likely the same CRMA5 movement as used in the watch linked above, based on the specs and verbiage provided. The automatic-winding caliber uses a neat variable geometry (meaning it can be adjusted based on the wearer’s activity level) rotor in 18k-gold, with — you guessed it — diamond inlays. Assuming it’s the CRMA5, it operates at 28,800vph and has a power reserve of 50 hours.

Let’s be honest, these watches are absurdly ostentatious. There can be no doubt as to the insane technical feats required to create a watch of such opulence. The fact the case has been so meticulously made from a single block of sapphire is impressive, in itself. Add to that the difficultly in achieving a homogenous hue and opacity when coloring sapphire and you have a really special piece. Price and availability haven’t been released for these yet (we will post when we receive them), but I would be comfortable speculating that these will be extremely limited and approach, or exceed, the seven-figure mark. To learn more, visit richardmille.com.