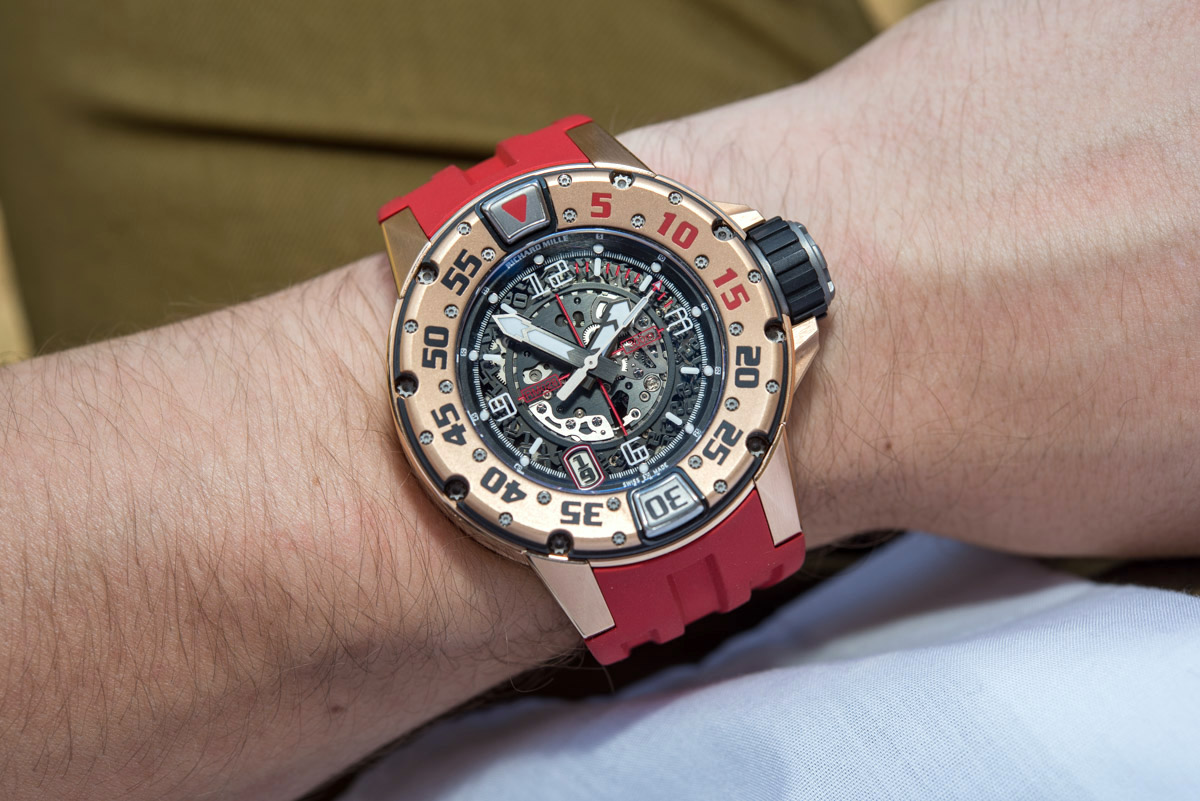 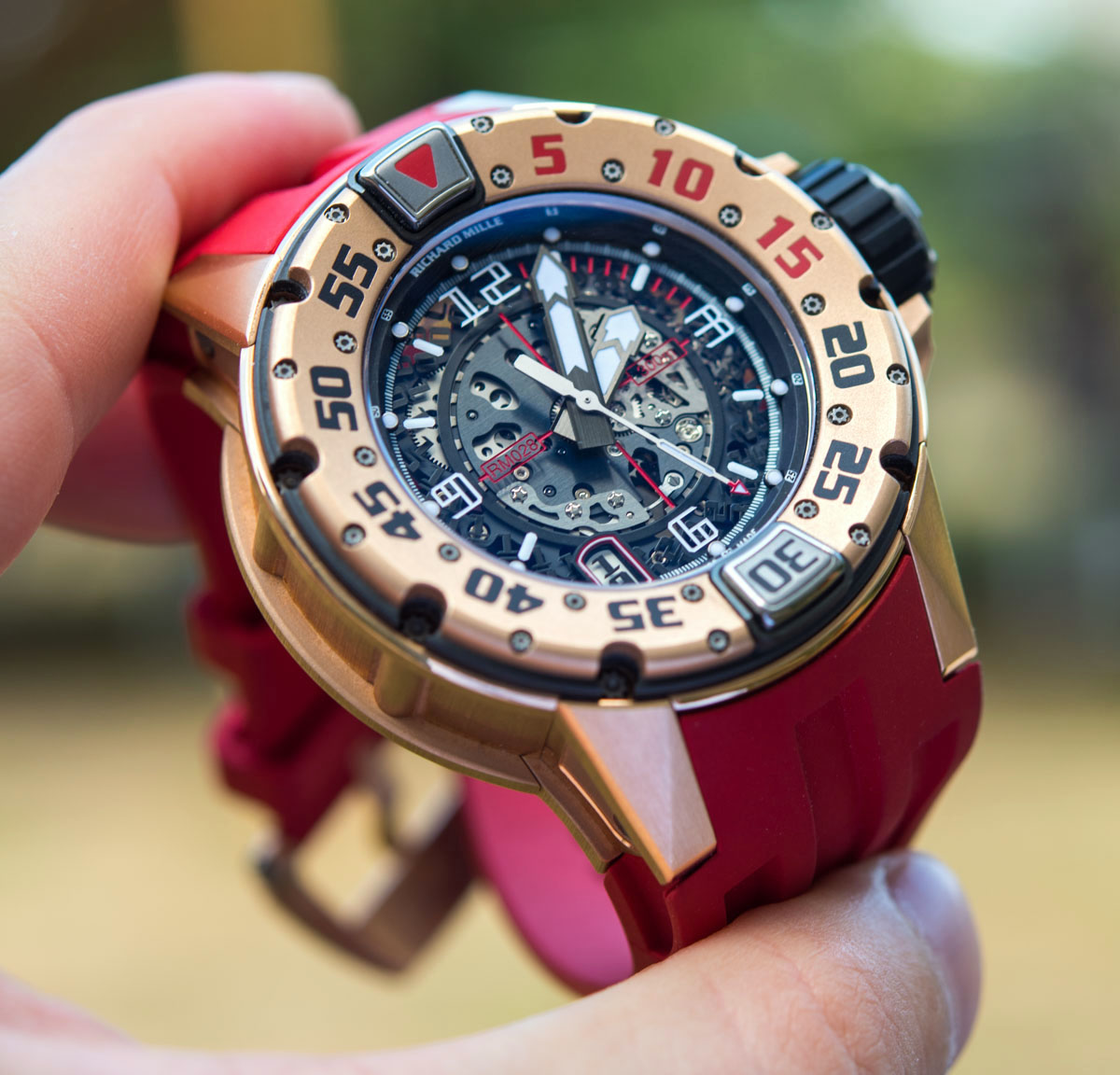 Strangely enough, I had little trouble wrapping my head around cable-suspended movements, sophisticated tourbillons inexplicably worn during top-tier tennis matches, or wristwatches with mechanical G-force sensors, even. The Richard Mille RM 028 Diver in red gold has, rather unexpectedly, become the first Richard Mille that I feel sticks out from the complex, but unique parallel universe that Richard Mille watches have carved out for themselves over the years.

If you want me to go on about the price and why these cost so much, you’ve come to the wrong place – these watches live in a niche that they themselves created. So, if anything, they have earned it. And if they weren’t where they are, another brand would delightfully take their place in a heartbeat. More to the point though, if you for a moment think that any watch priced over, say, a few thousand bucks isn’t a self-indulgent exercise in excessive spending, then I’ll call you naive at best; or a hypocrite at worst. However, once someone’s soul – and accountant – is prepared to spend $100k+ on a Richard Mille, I’m not quite sure why anyone would get this particular watch… Having worn the RM 028 in red gold for a few days has not convinced me otherwise and here’s why that is. 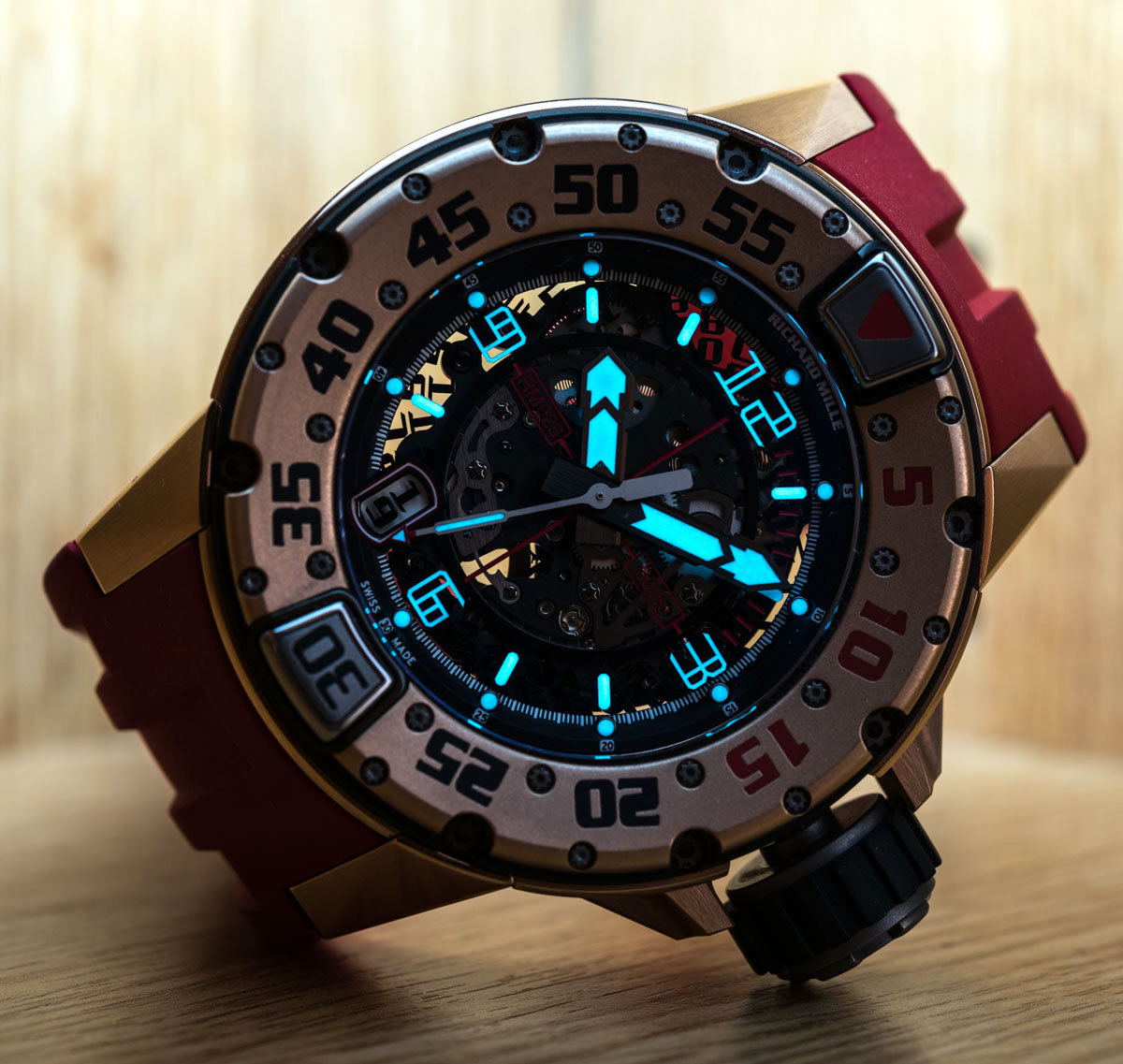 We’ll talk about positives soon enough, but I’ll cut to the chase and say that what defines Richard Mille watches, in my mind at least, after having seen and photographed several dozens of very different models and done long-term reviews on two rather unalike pieces, are the following basic principles: lightness, absolute wearing comfort, an inimitable aesthetic, and cutting edge execution. The Richard Mille RM 028 in red gold ticks only that latter category, in my book, but misses out on the others in comparison not to other watches, but to other Richard Mille watches specifically. Because, let’s face it, once you want an RM, the competition for your next purchase is shared between the brand’s watches only. 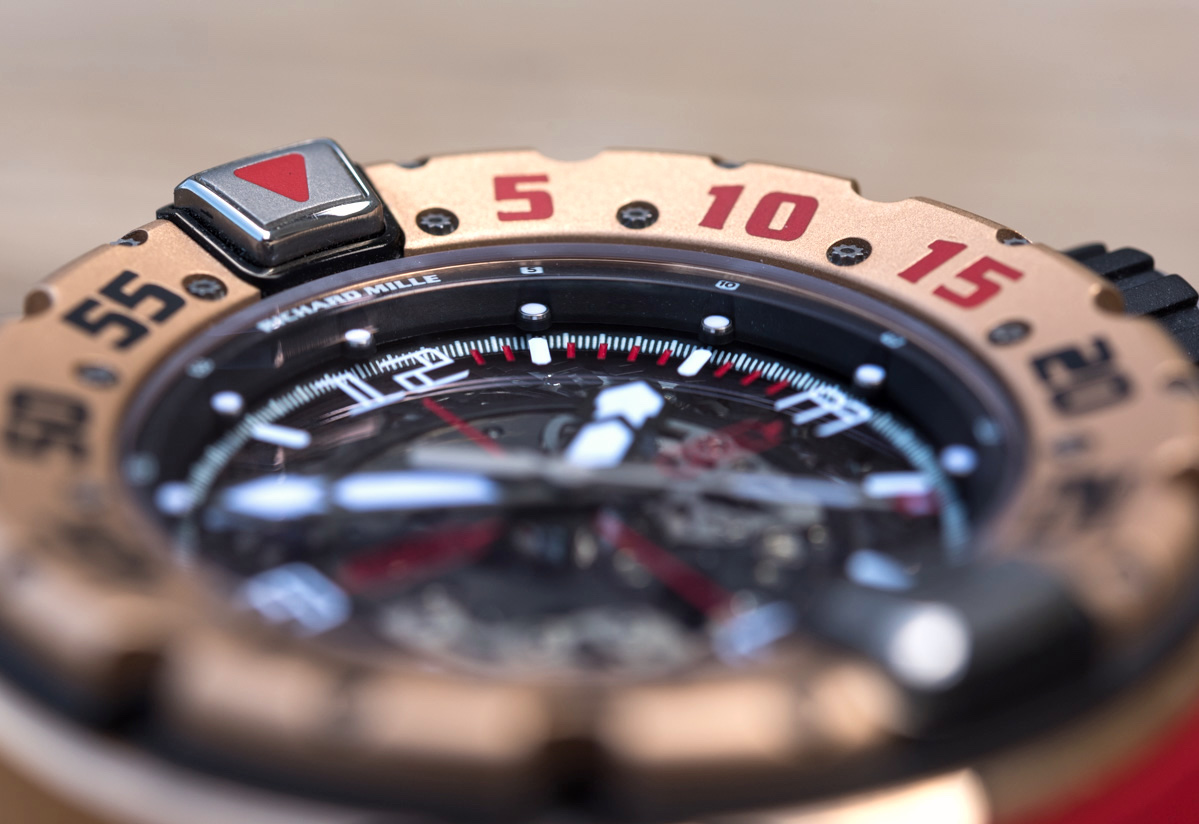 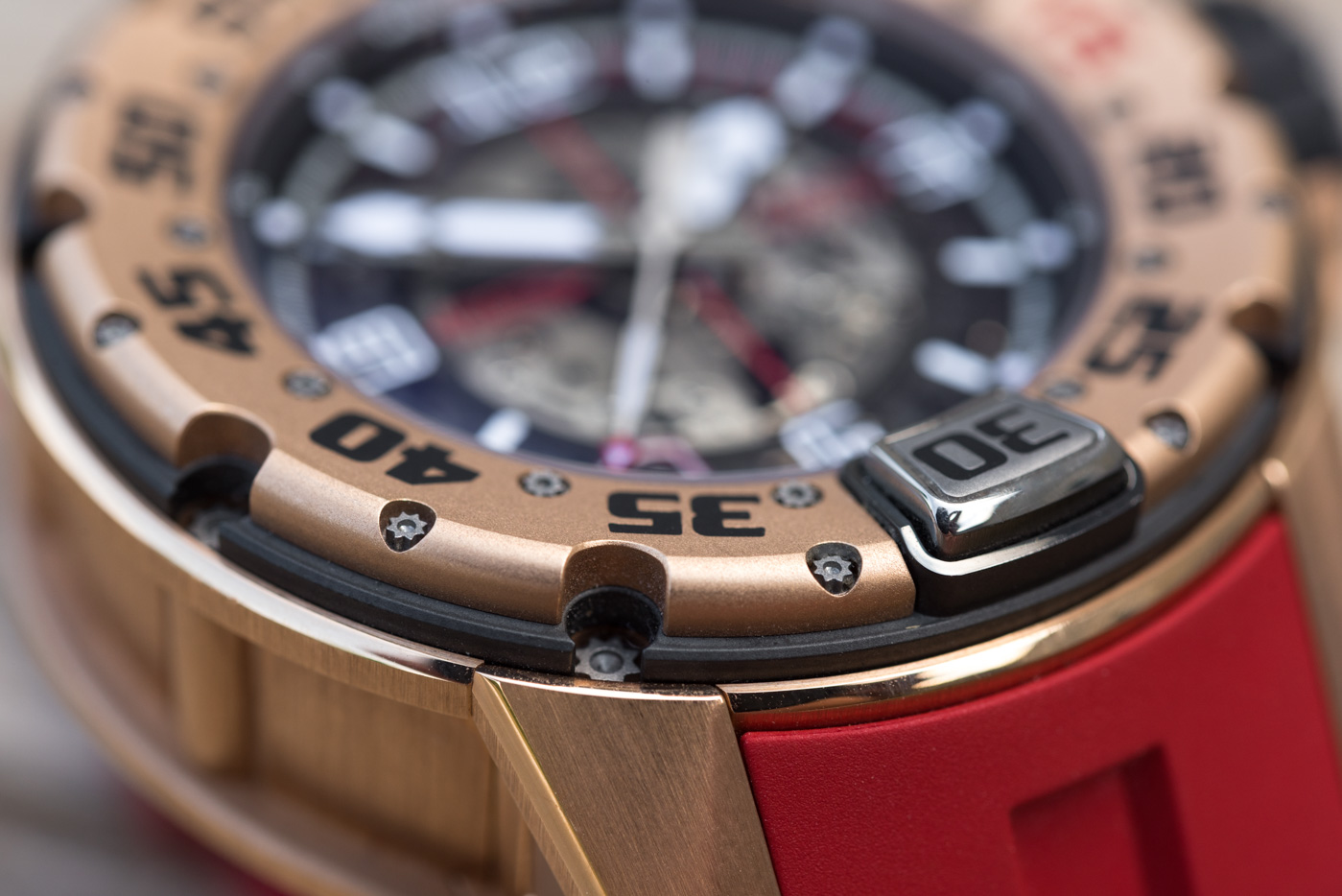 First, let’s talk weight. I kept adding “in red gold” to the watch’s full title above and I’ve done so precisely because it makes a world of a difference when compared to the RM 028 that is also available in lightweight titanium. In other words, this particular watch is laughably heavy as in it baffled – and amused – me greatly when I felt its ostentatious heft. I’d say close to 180 grams – but I could be wrong, and I’ll confess to not having my kitchen scale around yet once again. Having handled countless gold watches before (this one at 47mm wide and 14.60mm thick is rather large) it still dwarfs everything else I’ve handled this side of a watch in solid platinum with a platinum bracelet. It’s also a notable hint at the trustworthiness of the ever more often echoed rumors of hollowed out gold cases becoming an increasingly more common practice in this industry. 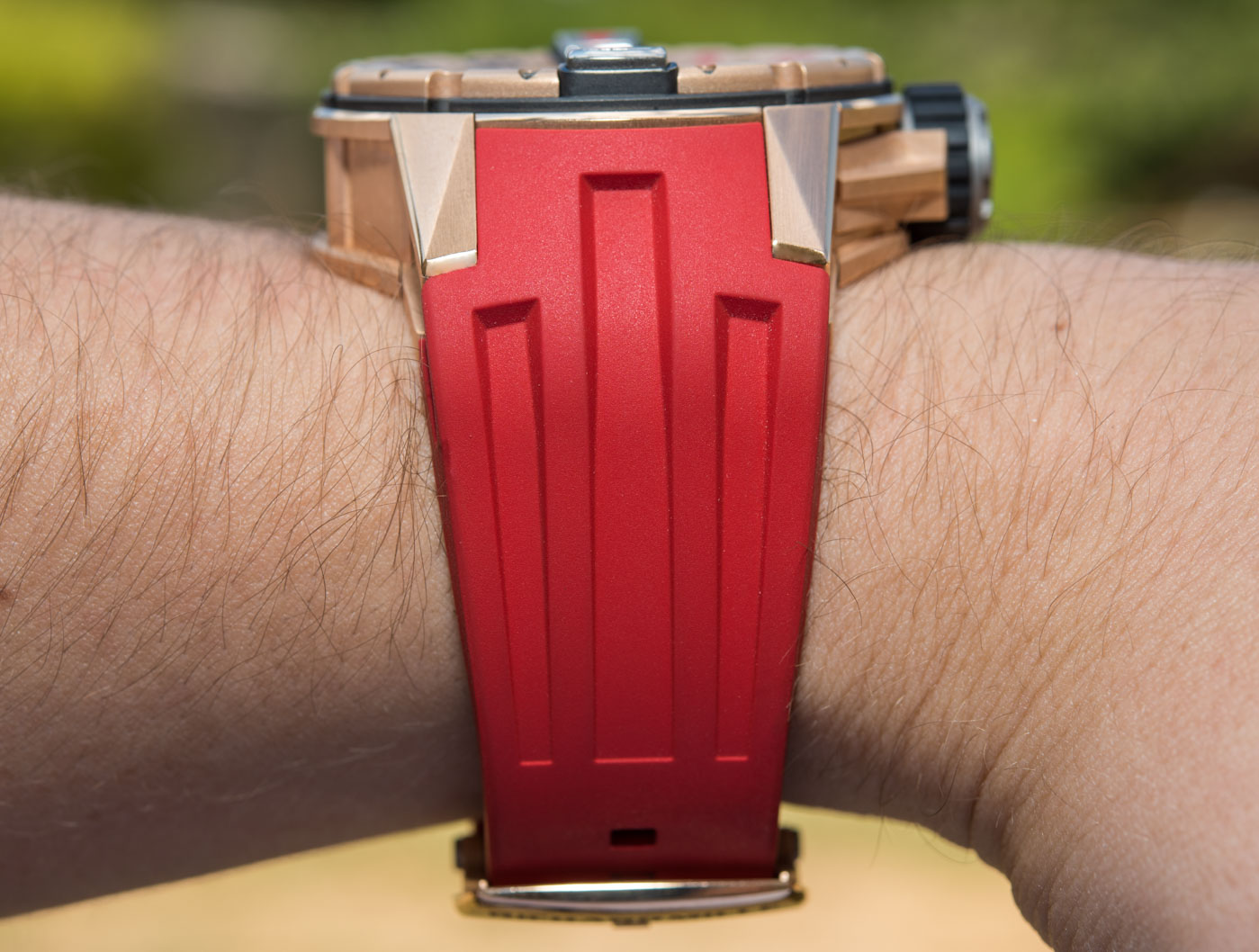 Because gold, when it’s solid and legit as it is here, is indeed heavy AF, and this watch with a titanium, partially skeletonized, merely 30.25 by 28.45mm wide and 4.33mm thick titanium (!) movement really gives you an idea of how much “all gold” cases should actually weigh. It’s genuinely ridiculous. “So wait, this watch having a proper, all gold, three-piece case is somehow a bad thing?” In this case I’ll say yes to that, because we are looking at a Richard Mille – not a Royal Oak. If you look at the overall direction of Richard Mille, the focus of their super high-end pieces on ultra lightweight has trickled down into less complicated watches like this RM 67-02, as being astoundingly light has become one of the trademarks of the brand. 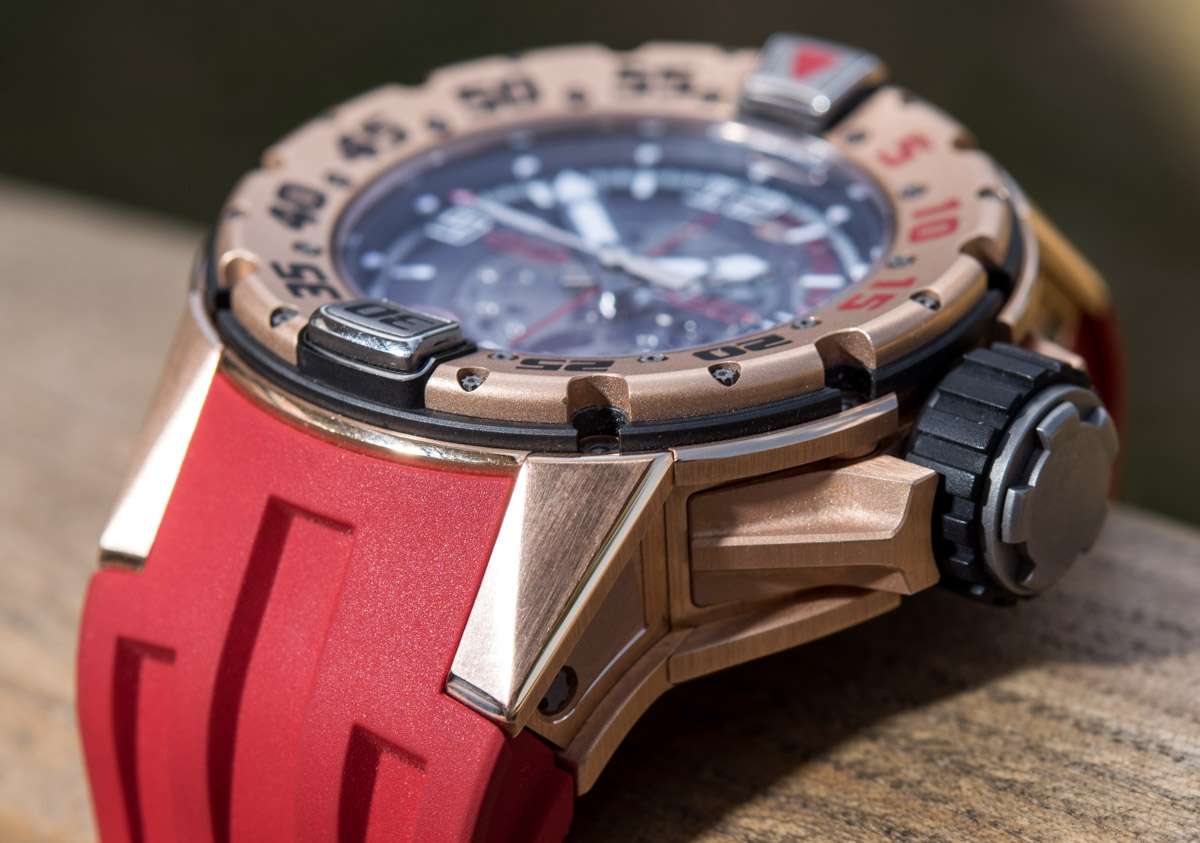 As such, buying a gold Richard Mille, and especially one this outrageously heavy not only by RM standards but broader Swiss watch industry standards too is, in my mind, a lot like buying a Ferrari with solid gold body panels. Sure, the “added value” and easy recognition of gold will be there both in case of the Fezza as much as it is present with this RM 028. But when it comes to such brands with what is an unbeatable focus on performance, I simply don’t see the point in throwing all those achievements out the window for the sake of bling. Speaking of which, I’ll add that another specialty that Richard Mille watches share with but a few out there in this segment is the stealth element – meaning that, yes, everybody exposed to a 1%er lifestyle will recognize it, but at the same time it will fly under the radar of the plebs with ease… But this slab of gold does away with all of that. 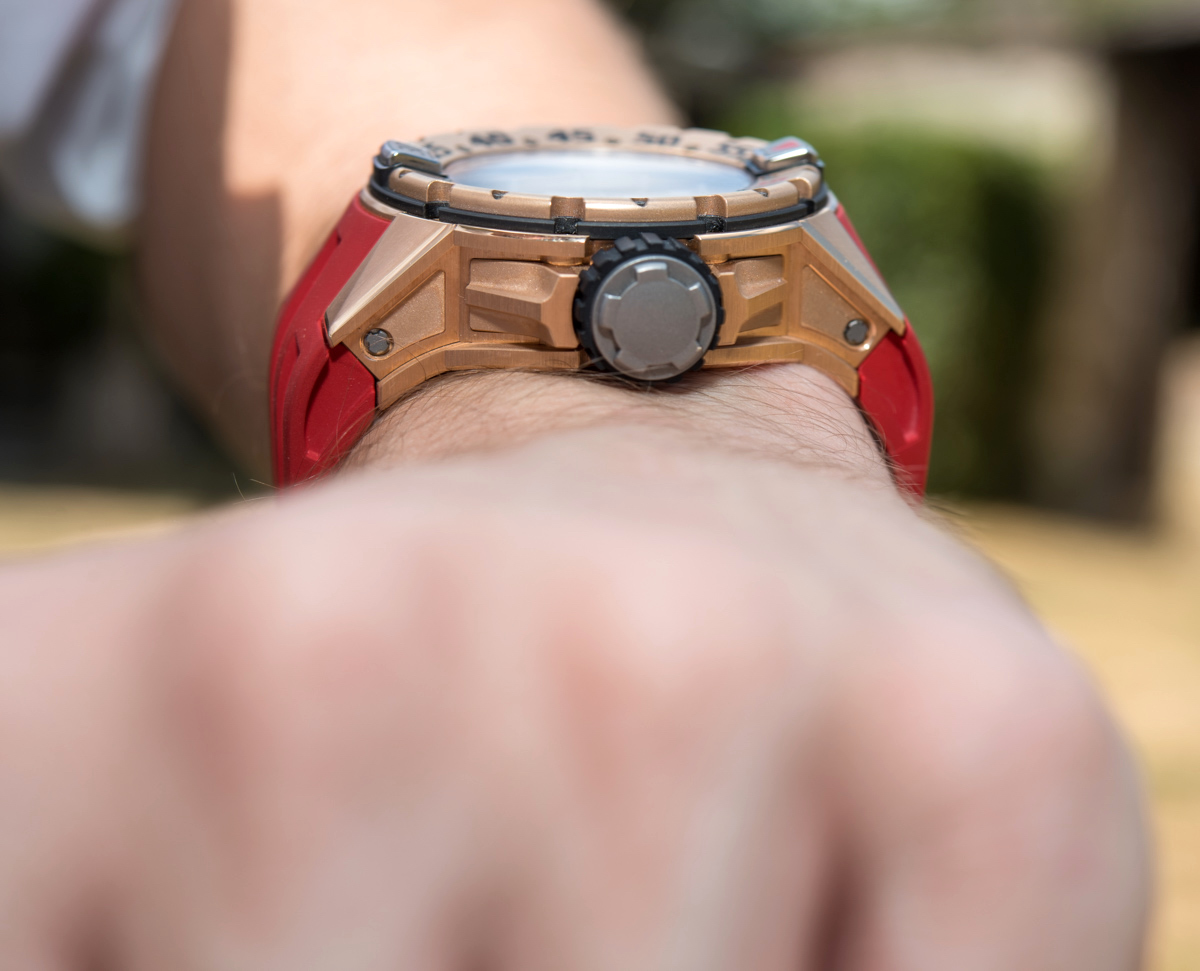 With lightness out the window, the next thing is “absolute wearing comfort.” First things first: the Richard Mille RM 028 Diver in red gold is the most comfortable watch I’ve ever worn in this size and weight segment (47mm wide, 15mm thick). Frankly, the RM 028 handles its weight superbly – and, as I have said in previous Richard Mille hands-ons and reviews over the last several years, I cannot fathom why other luxury watchmakers (with triple the ego of RM) continue to struggle in this department so badly and so often, when a fresh brand can pull it off with such excellence. In my experience, wearing comfort in a watch is primarily defined by: weight, shape of lugs and caseback, integration and material of the strap, plus type and execution of the buckle. “That’s it?” Yeah, that’s all – and most all Richard Mille watches I’ve ever worn are a case study in great watch design.

This brings me onto a side note here. There lies a little (rather never) talked about reason behind why some ultra high-end watches are seen more frequently worn and favored by their owners and why their apparent popularity is greater than their percentage-wise presence on the market. You guessed it right, it’s wearing comfort. I’d go out on a limb and say the average Richard Mille owner has more than a handful of other impressive watches in his collection (ladies arguably not so much given the pathetic selection of impressive ladies’ watches that the greater industry as a whole has to offer in comparison to what’s available to men… Richard Mille has been really pushing the envelope with ladies’ watches, but that discussion is for another time). And yet, it’s always the same low number of ultra high-end brands that we see worn in places with peak concentration of luxury watches – and again, that’s not because other fantastic-looking or exotic watches aren’t being purchased, but rather because they stay in the vaults either because they are anywhere from mildly to hideously uncomfortable to wear or because their value, unlike that of most watches by Richard Mille and a few other brands, drop yet more alarmingly had they seen a bit of wear. Value retention on RM watches is extremely good on the core pieces – but also on basically most all other references as well, apart from the square RM 016. If you disagree, I’d suggest shopping around on Chrono24 or wherever you see fit. 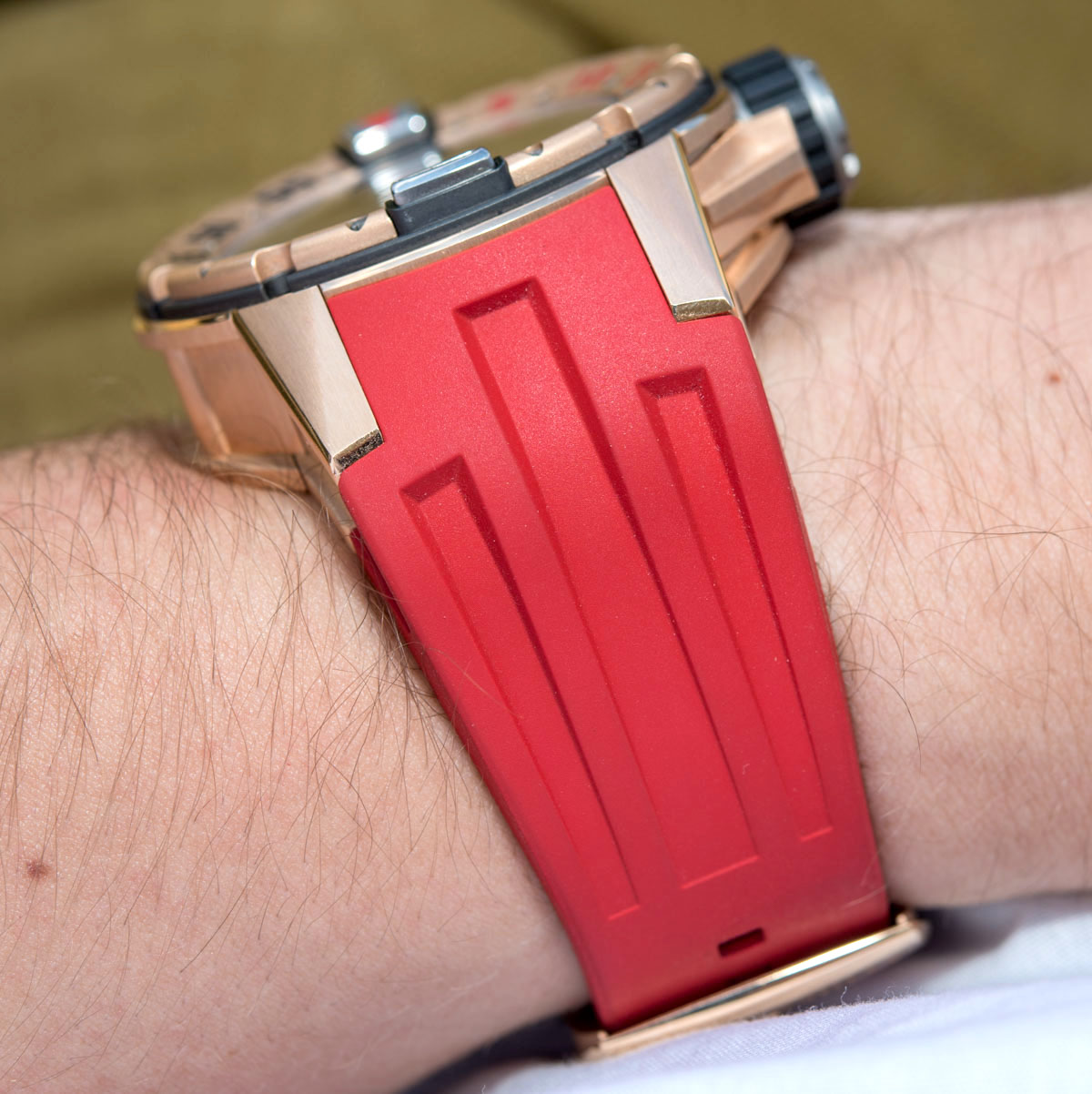 Side note over and back to wearing comfort for another thought. Look at the unusually deep integration of the strap into the case, the pre-cast curvature of the supple rubber strap (there’s no ridiculous “break-in period” as is the case with countless luxury watches priced even up high and beyond the 5-figure price range), the grooves that add rigidity and keep the heavy watch head from flopping side to side, the no-frills tang buckle that’s aptly wide and slim, and the curvature of the caseback – including the rear sapphire crystal that is 1.90mm thick in its center and 2.60mm thick at its outer edges as it follows the curve of the caseback, which in turn follows the curve of the lugs. Is this hard to do? I guess it is, working with a varying thickness sapphire crystal or getting the shape and curve of the lugs and caseback exactly matched up – but I remain stunned by the lack of effort exhibited by most others when it comes to getting these right, if nowhere else then at least in their sports watches. 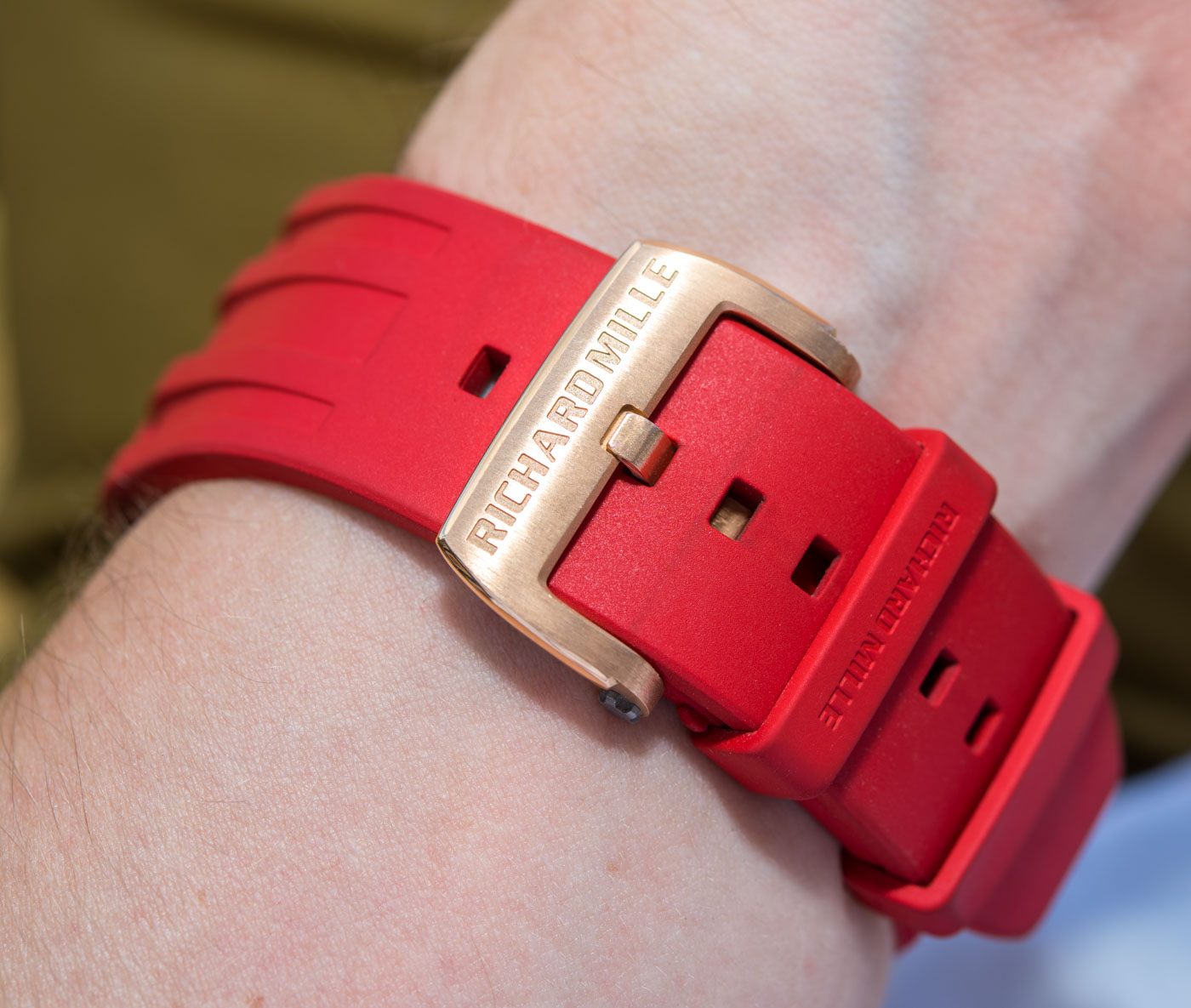 Here’s a correlation that I realized over the years: watches that you can stand up with the strap closed prove to be comfortable. And yeah, I’m totally going for the “Weirdest Watch Fact of the Week Award” with this – let me know in the comments below if I’ve won anything. Admittedly, this may be the sign of me being a bit too immersed in all this as I see myself come to conclusions like that, but I maintain that, broadly speaking, is a true statement. You are invited to join me in my quest and start trying that on watches that come on straps. Report back a few years from now with what you experienced after you’ve done that on at least 50, but rather a hundred watches. That noted, let’s get back on track.