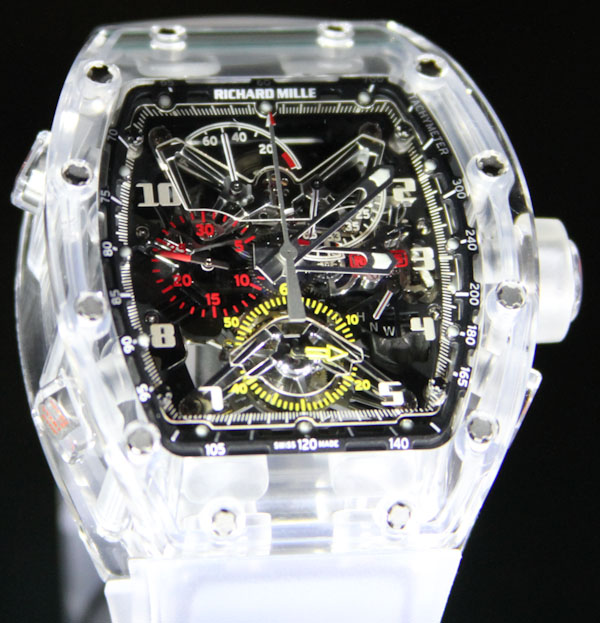 No doubt it is cool. It is also wildly expensive and a showpiece above all else. This new highly limited edition watch from Richard Mille is the RM 056 and comes in an all sapphire crystal case. It is very visually intriguing and costs a mere $1,650,000. Probably easier to laugh about the price rather than get upset.

According to Richard Mille it requires over 1000 hours to produce the case of the watch. The case is identical to that of previous Richard Mille Felipe Massa pieces. The movement is also an updated evolution on that RM 008 caliber. Only the case is in sapphire crystal and the movement layout and architecture have changed a bit. 1000 hours is a long time. I would hate to ask how long it would take for a new case if you need it to be repaired. 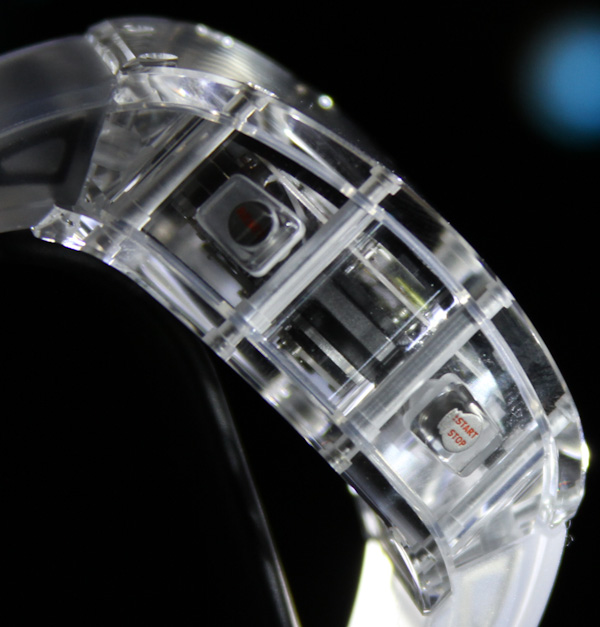 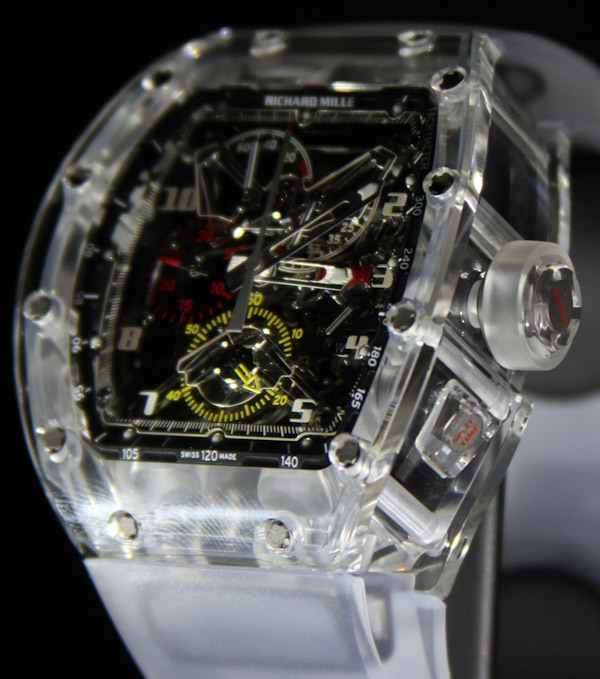 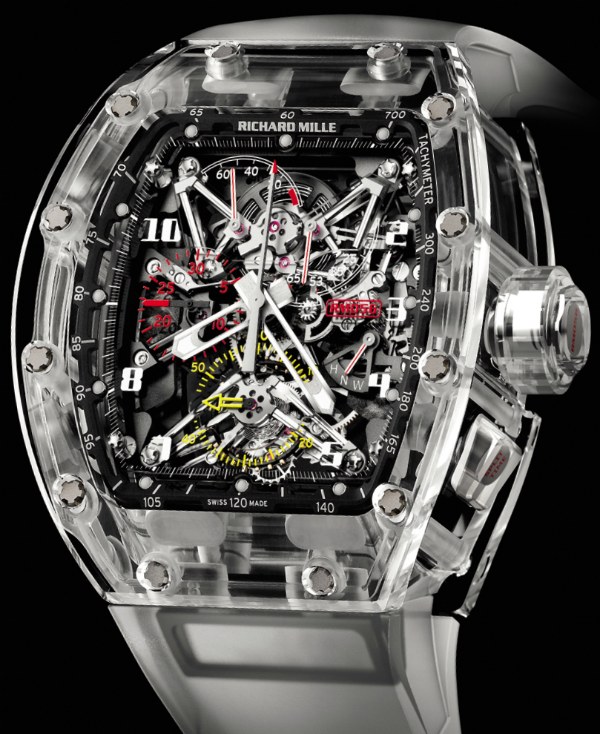 The full name of the watch is the RM 056 Felipe Massa Sapphire Tourbillon Split Seconds Competition Chronograph. Aside from a house in Bermuda, I am not sure what this watch is competing with. The concept is actually very impressive. Starting a few years ago I started to ask questions to industry people about the feasibility of making an all sapphire crystal case. They said it was possible but a pain in the ass. Basically cutting a flat and round piece of sapphire crystal is the most simple. Once you start to do curves and angles and larger complex pieces it gets complicated, time consuming, and frustrating.

The frustration really has to do with the time involved and how brittle sapphire crystal is during the machining process. It breaks a lot – especially when screw holes are drilled in it. This would especially be an issue for the RM 056 given all the screws used to sandwich the case together. There are a ton of them and each of those holes needed to be drilled and will potentially crack the case. On the plus side I hear from industry people that once the sapphire parts are machined, they are pretty tough. So the machining process is risky, but after that the cases would be tough enough – just don’t slam it around or it will shatter. You can only do that with a G-Shock. 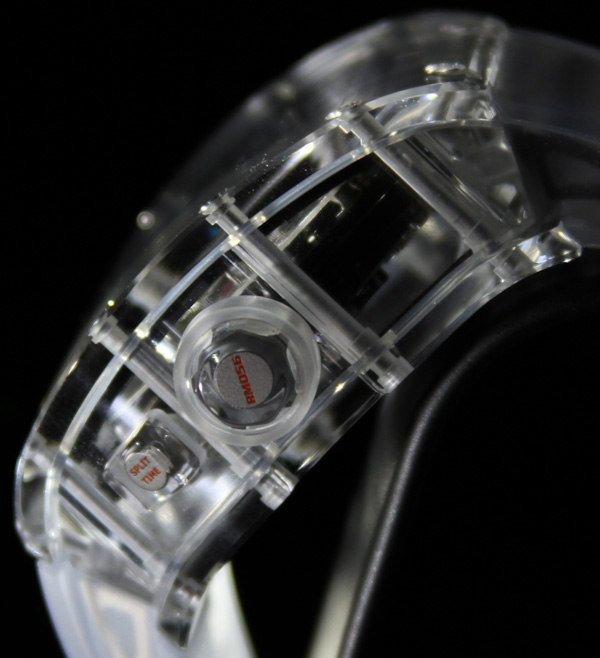 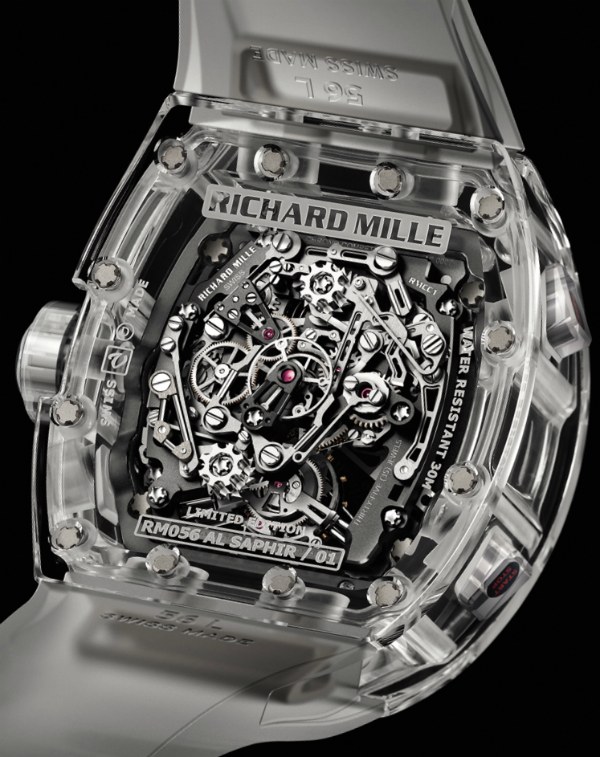 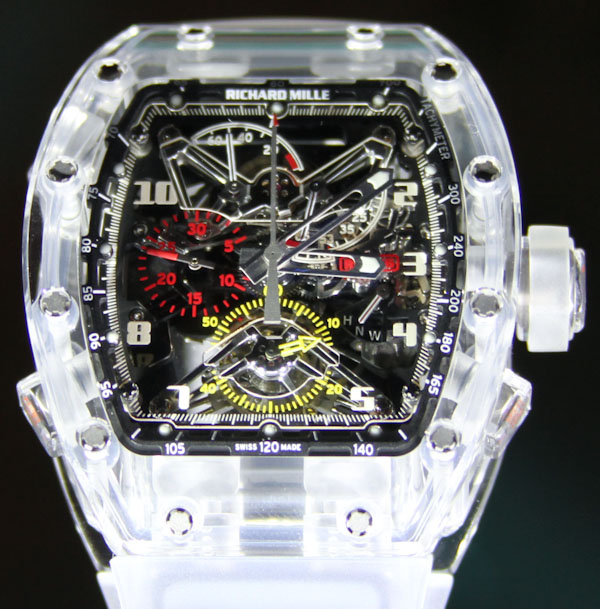 Wearing this watch around won’t get you as many looks as something in gold or covered in diamonds. That is actually sad. Wearing a “glass house” watch might get attention from the right people – but they might as well assume it is polycarbonate or not give it much thought. Diamonds will get you a lot more notice and a fully diamond covered case will actually be MUCH cheaper than this watch. Ironic right? Still… at least you’ll know how complicated it is.

The movement in the watch still impresses me with its looks and features. According to Richard Mille it has been overhauled with new pieces, a 20% lighter weight, and a slightly new layout on the dial. The manually wound movement has a tourbillon, 30 minute split second chronograph, a power reserve indicator, and a torque indicator. There is also a function indicator for the crown. Even with all that, and the skeletonization, the dial doesn’t look like a total mess.

How many of these super sapphires will Richard Mille make? Just 5 pieces. Yup. 5000 hours of work (or more) into the highly limited edition RM 056. I wonder if Felipe Massa gets one of them? I know he wears a lot of RM watches on rotation. Again, price is $1.65 million.