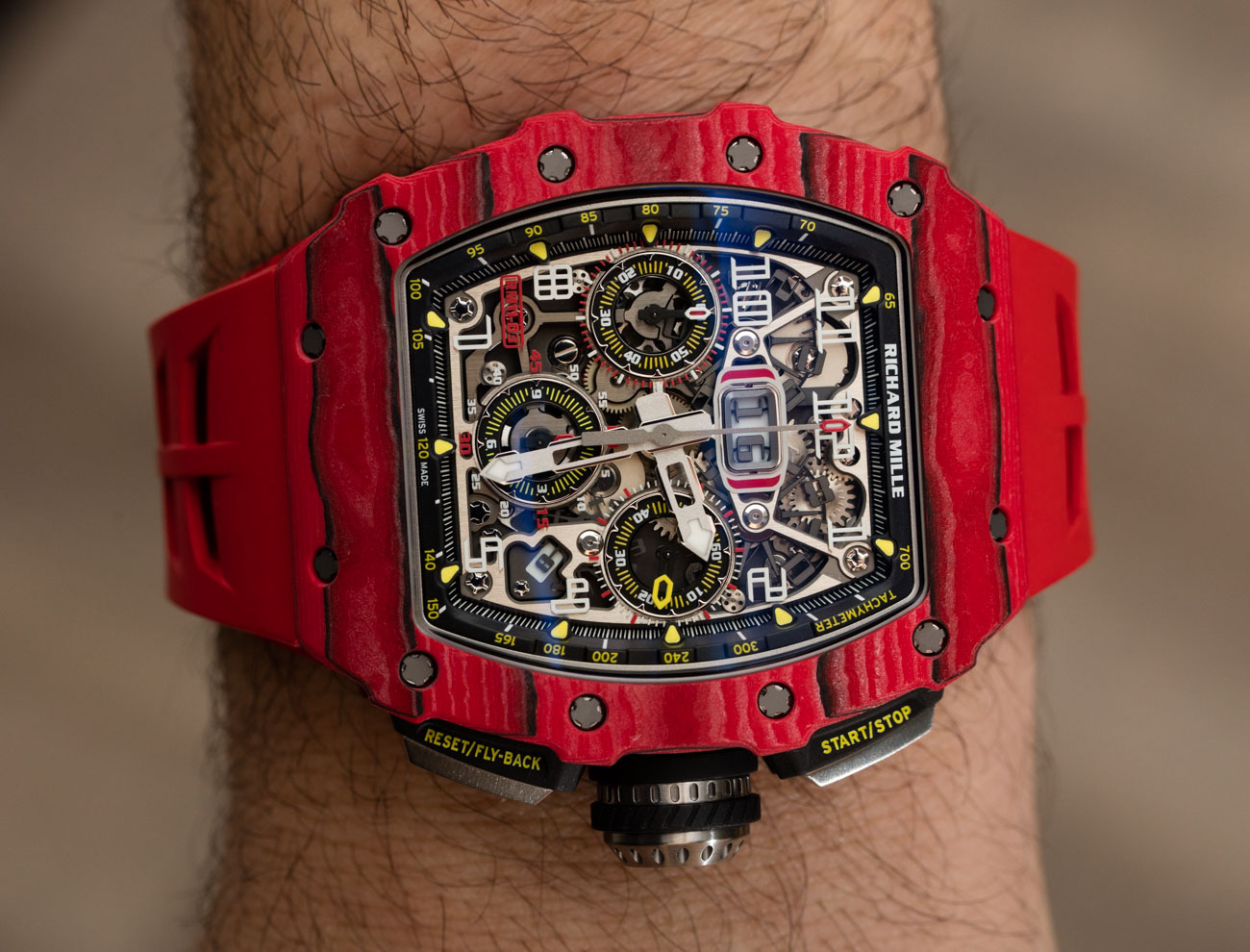 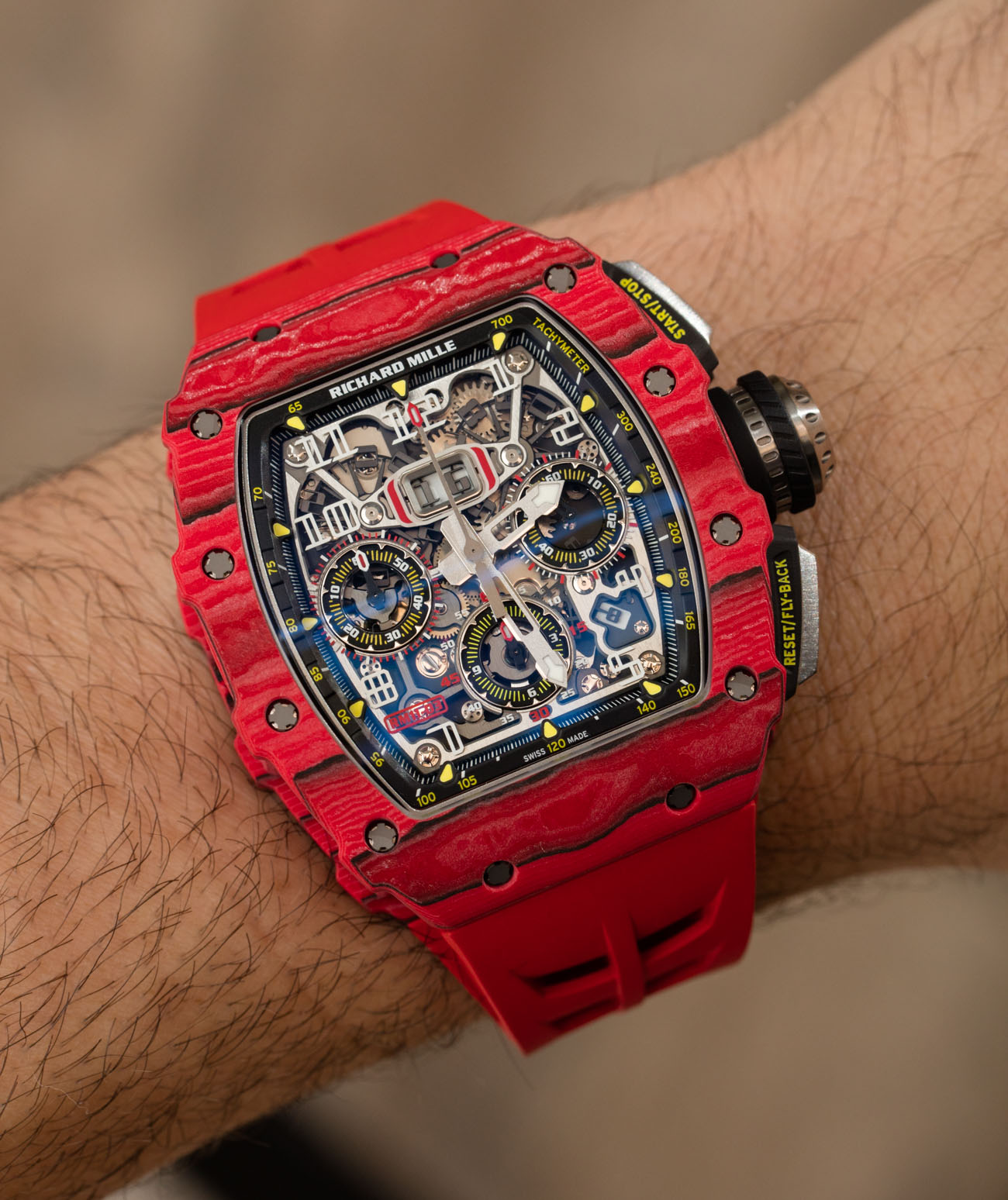 One of the most popular Richard Mille watch product collections is the gracefully aging RM 11 (it has had some updates over the years), seen above in its RM 11-03 FQ TPT version (there’s also the RM11-03, RM011, and RM 011). The RM 11 family goes back more than a decade and is based on the RMAC3 movement, which is simple by Richard Mille standards but scores high in terms of practicality. It is, however, a very satisfying mechanism that does more than one might expect from a quick glance. A lot of watch-lovers go wild for RM 11-o3 watches, and this fact has, in some instances, seen pieces sold for more than retail price. RM 11-03 features the distinct look of Richard Mille timepieces (modern tonneau-style shape), along with a host of aesthetic versions (such as here in red quartz TPT) that allow wearers to get the bold visual attention they like from wearing a Richard Mille timepiece. At the same time, the RM 11-03 is less expensive than Richard Mille’s various $500,000-plus products, albeit still very expensive.

The RM 11-o3 FQ TPT has a case that is a mixture of red quartz and carbon, produced in a series of layers (“TPT” is “thin-ply technology”) which offer an attractive aesthetic when machined — similar, in theory, to Damascus-style steel. Originally developed to be a light and strong material for sports (such as competitive racing yachts) and industrial purposes, TPT benefits the watch landscape because of its aesthetics. It can be rendered in a series of colors, and the unique textured look of the case makes it very fashionable today. Richard Mille was smart to adopt TPT materials for watch cases starting more than five years ago and has since released a universe of products in various colors and styles that feature TPT case materials. 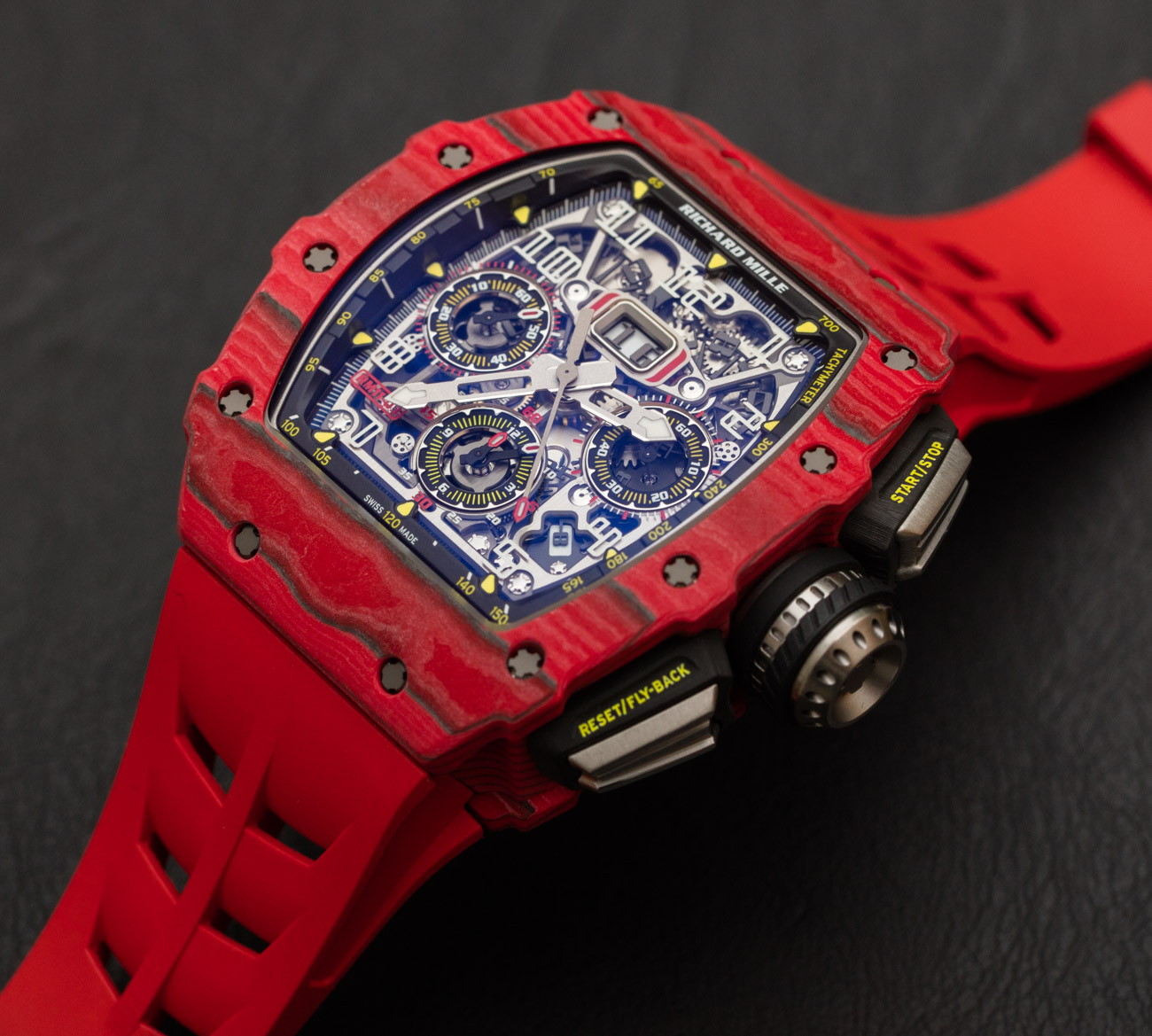 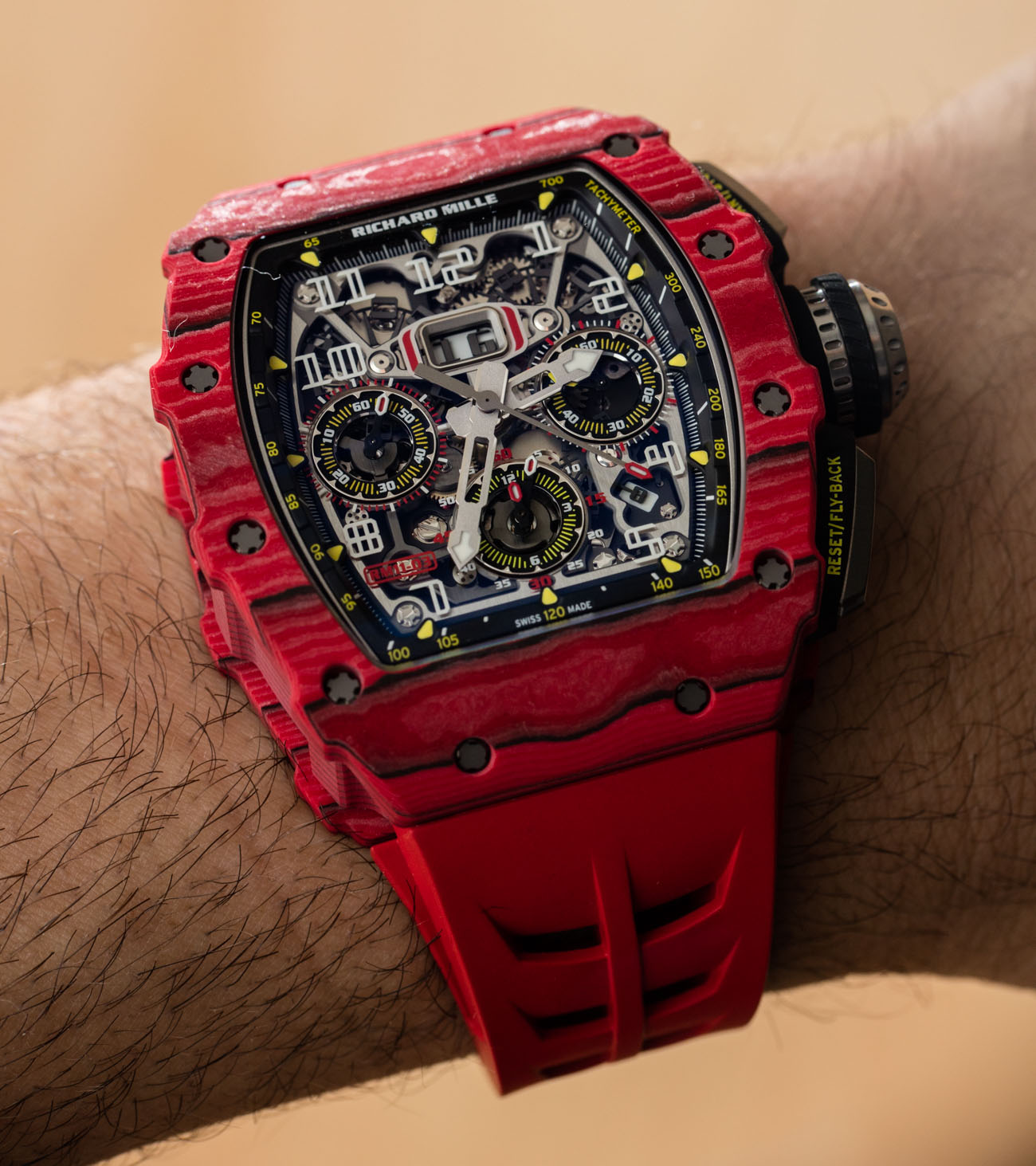 Richard Mille’s latest RM 11-03 watch cases have a unique construction in which the movement is affixed to mounts that are part of the case, as opposed to a separate movement holder ring. This and other details are possible because of the long machining times Richard Mille makes possible for its parts (one reason these watches cost so much). The curved tonneau-style case is 44.50mm-wide (not including the crown), 44.94mm-tall, and 16.15mm-thick. On the wrist with the attached bespoke and very high-end rubber strap, the wearing experience is extremely comfortable, in addition to being visually assertive.

The Richard Mille RMAC3 automatic flyback chronograph movement operates at 4Hz with about 50 hours of power reserve between two barrels. The automatic rotor also features Richard Mille’s variable geometry technology, which is interesting, though rarely used. It allows a watchmaker (not the wearer) to change the spinning geometry of the rotor in order to make it rotate more or less easily, according to how active the wearer’s wrists are. Theoretically, using this feature helps someone have the watch be wound enough, but not too wound. I have yet to meet anyone who has carefully investigated their own wearing style and actually had Richard Mille individually set the rotor geometry for their “wrist habits.” 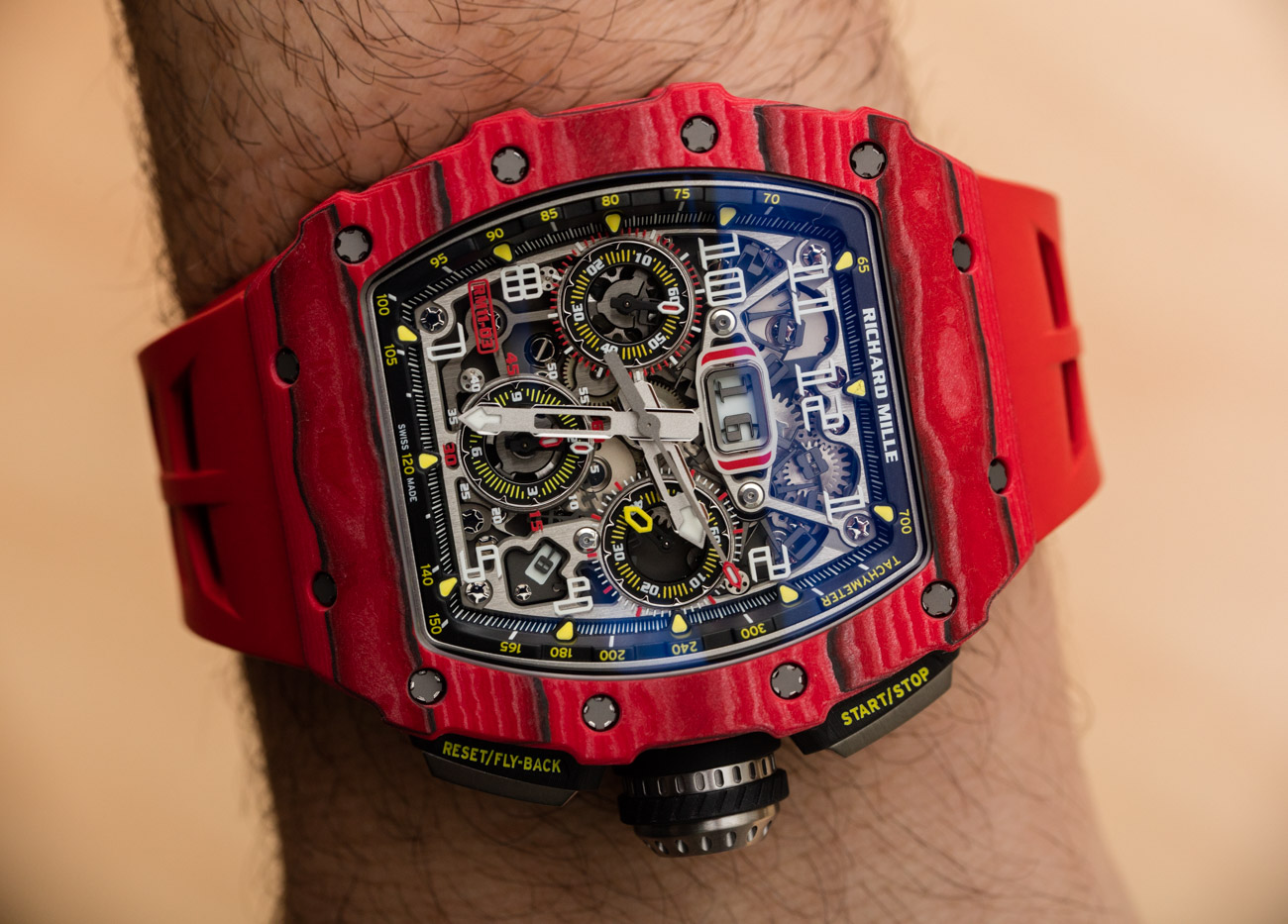 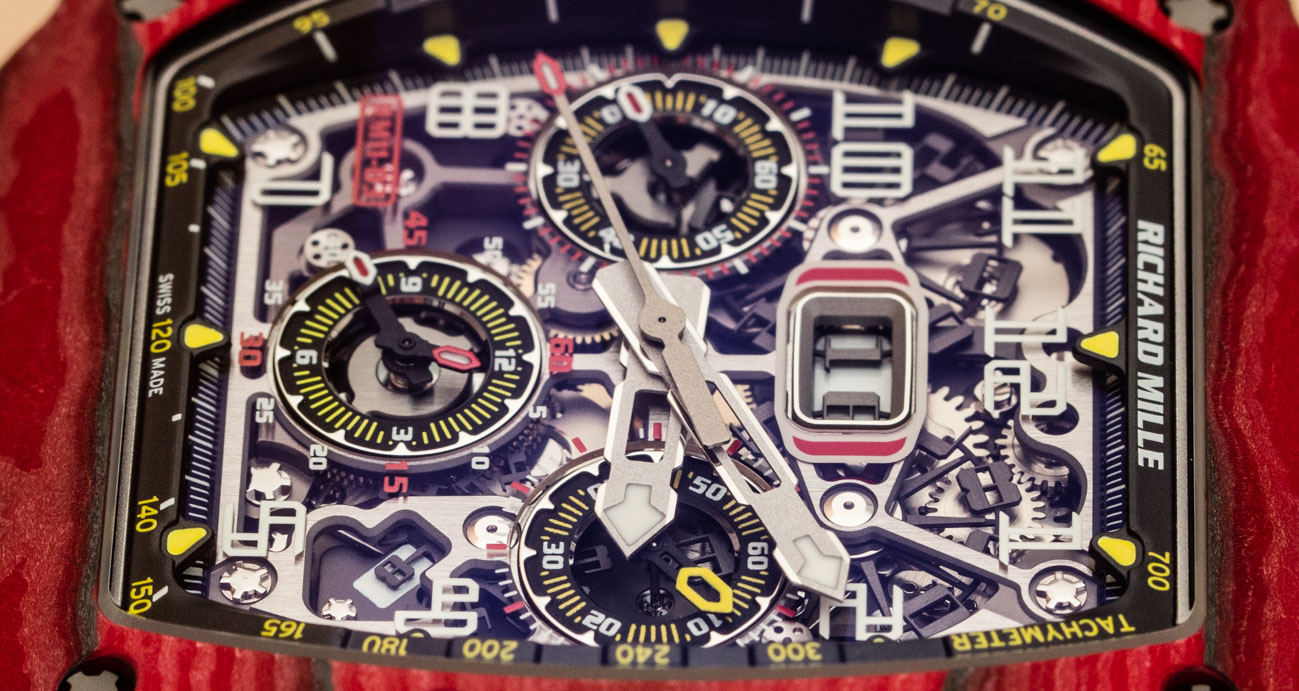 The RMAC3 movement includes a flyback-style chronograph (no need to reset chronograph before you start it again) with a 12-hour counter (hours and minutes are counted in the same dial), synchronized 60-minute countdown dial, and a big date indicator along with a month indicator neatly placed between 4 and 5 o’clock on the dial. That makes the RM 11-03 a chronograph annual calendar — which does exist out there but is a very uncommon type of mechanism. Visually, the RM 11-03 dial is legible but designed to be skeletonized in a striking way using titanium bridges and a lot of visual depth to amplify how the dial appears to the eye. Bold hands and bright dial-color accents help maintain legibility.

Richard Mille is among those modern watchmakers who have embraced the artistic appeal of combining organic-looking textures with otherwise contemporary design. That is the best way to understand the draw of the RM 11-03 with the FQ TPT case. The organic red and black lines produced as a function of machining the case offer a soothing quality to the industrial finishes and lines seen in the movement and other elements of the case, such as the crown, pushers, dial, and hands. 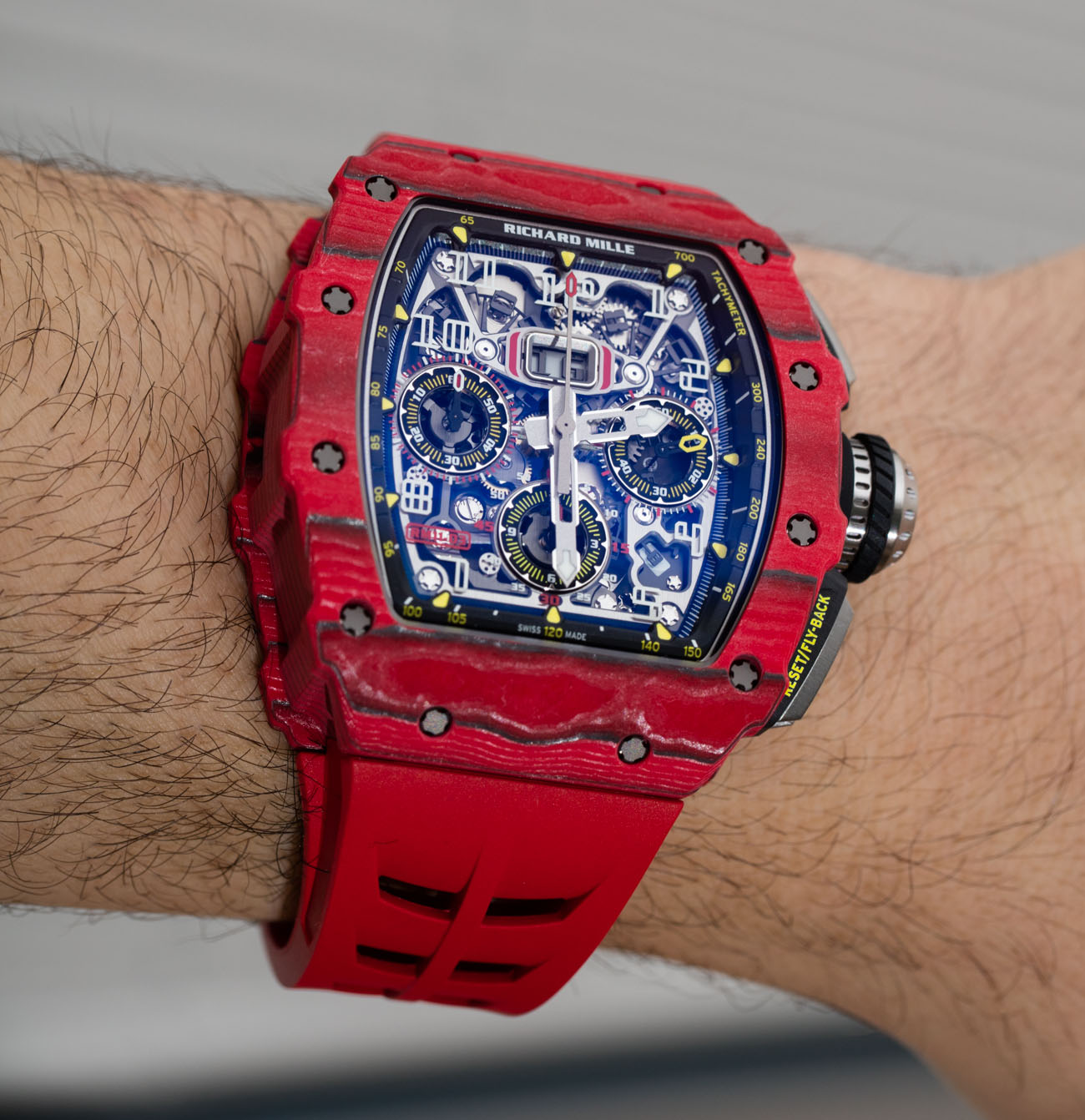 Richard Mille designers also did a nice job of making the RM 11-03 look very much like a “racing machine for the wrist,” a theme that has helped the brand capture the imagination of a lot of younger (and very well-funded) watch collectors. Richard Mille is never shy about its inspiration from the world of Formula One race cars, which regularly find their way into Richard Mille product designs.

Note that there are at least two very similar versions of this red quartz TPT Richard Mille RM 11-03 watch. Both are limited editions, and both have the same case design and are in the RM 11-03 family. One is this model and the other is part of the Felipe Massa collection (which has a slightly different dial design). If you didn’t know that these two watches existed, you could very easily mistake one for the other without knowing that Richard Mille happened to produce two rather similar timepieces. I actually prefer this RM 11-03 FQ TPT, not only because of the dial design but also because of the different crown and pusher design — which are very well done, in my opinion. 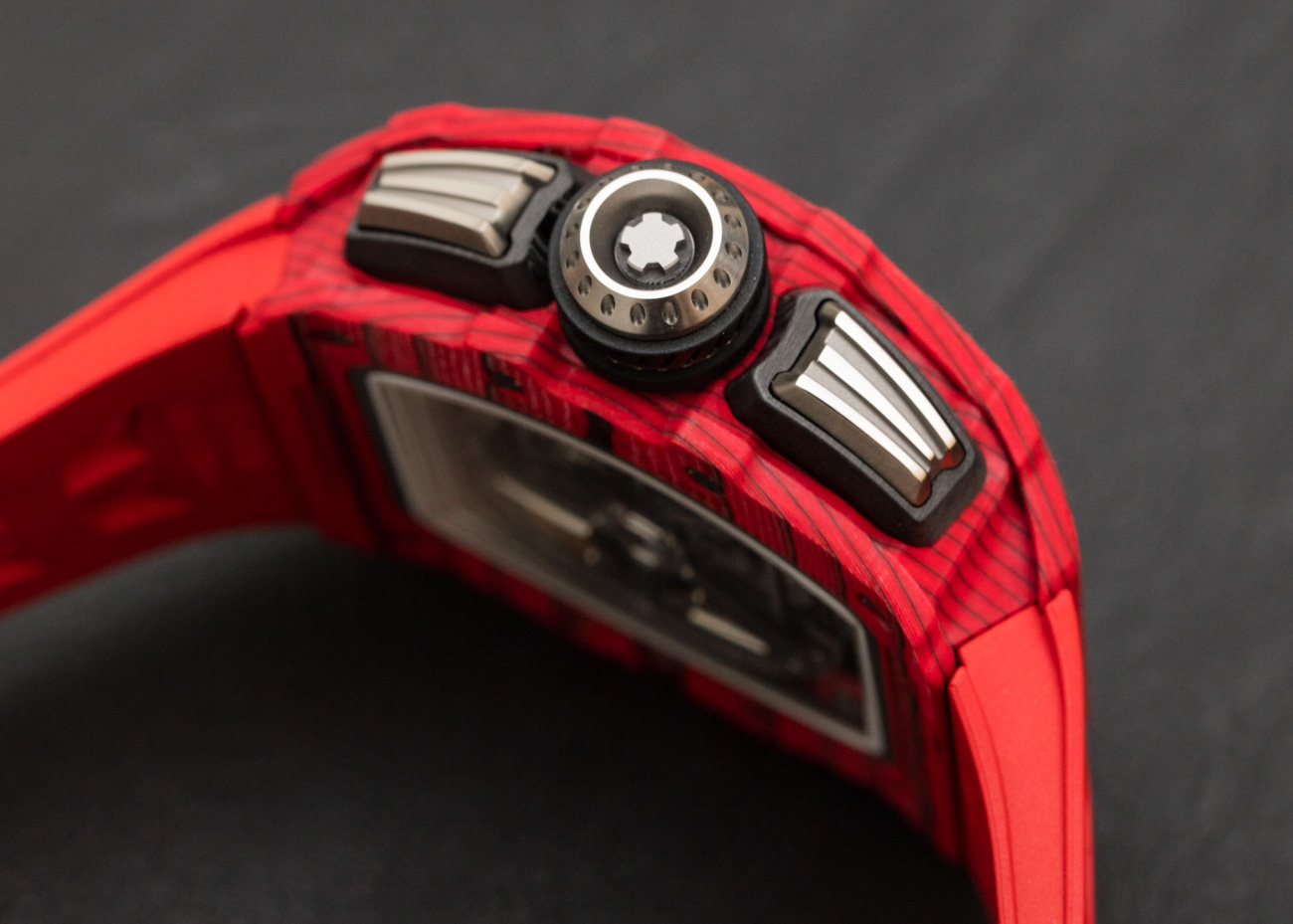 Most watch-lovers will not be able to afford a Richard Mille — which is sort of the point of the brand. Last year, I wrote, “Why Richard Mille Watches Are So Expensive” to explain this concept. Richard Mille is also on its own without being part of any watch trade show, as the brand pulled out of SIHH this year. That means that, in order for Richard Mille to keep demand high, it will need to continue to attract the attention of watch collectors and enthusiasts, even if most sales come from the ultra-rich who merely want something cool and status-defining on their wrist. The Richard Mille RM 11-03 Red Quartz FQ TPT watch is a limited-edition of 50 pieces and has a retail price of $173,500 USD. Learn more at the Richard Mille website here.