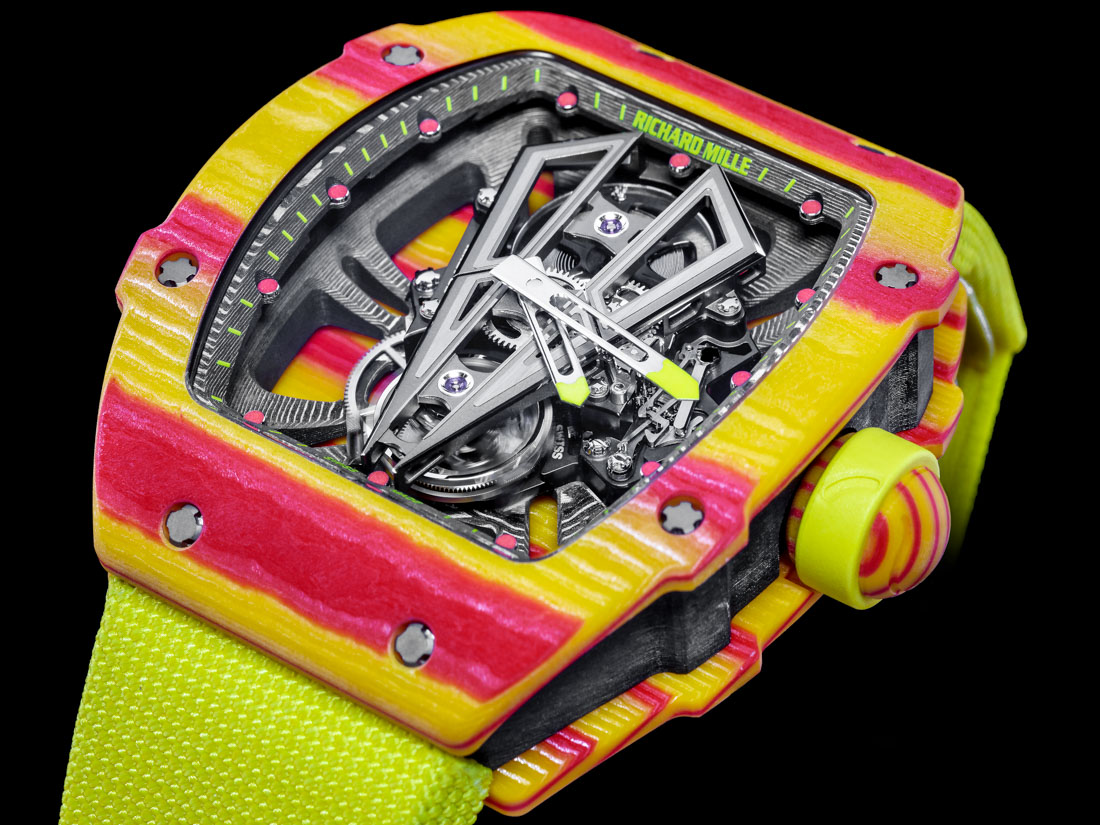 Having been a die-hard, full-time watch nerd for a good while now, I find that even upon first seeing a complicated watch, I can identify its features and functions with great certainty, no matter how niche or weird they are. A brand that can still very much surprise me is Richard Mille who today, neatly just before the French Open, has presented their Richard Mille RM 27-03 Rafael Nadal “Tourbillon Shock Resistance,” the latest and weirdest Richard Mille that “Rafa” will wear while hitting tennis balls through space and time with his mighty forehand – on his way, most probably, to claiming another Roland Garros (French Open) title. 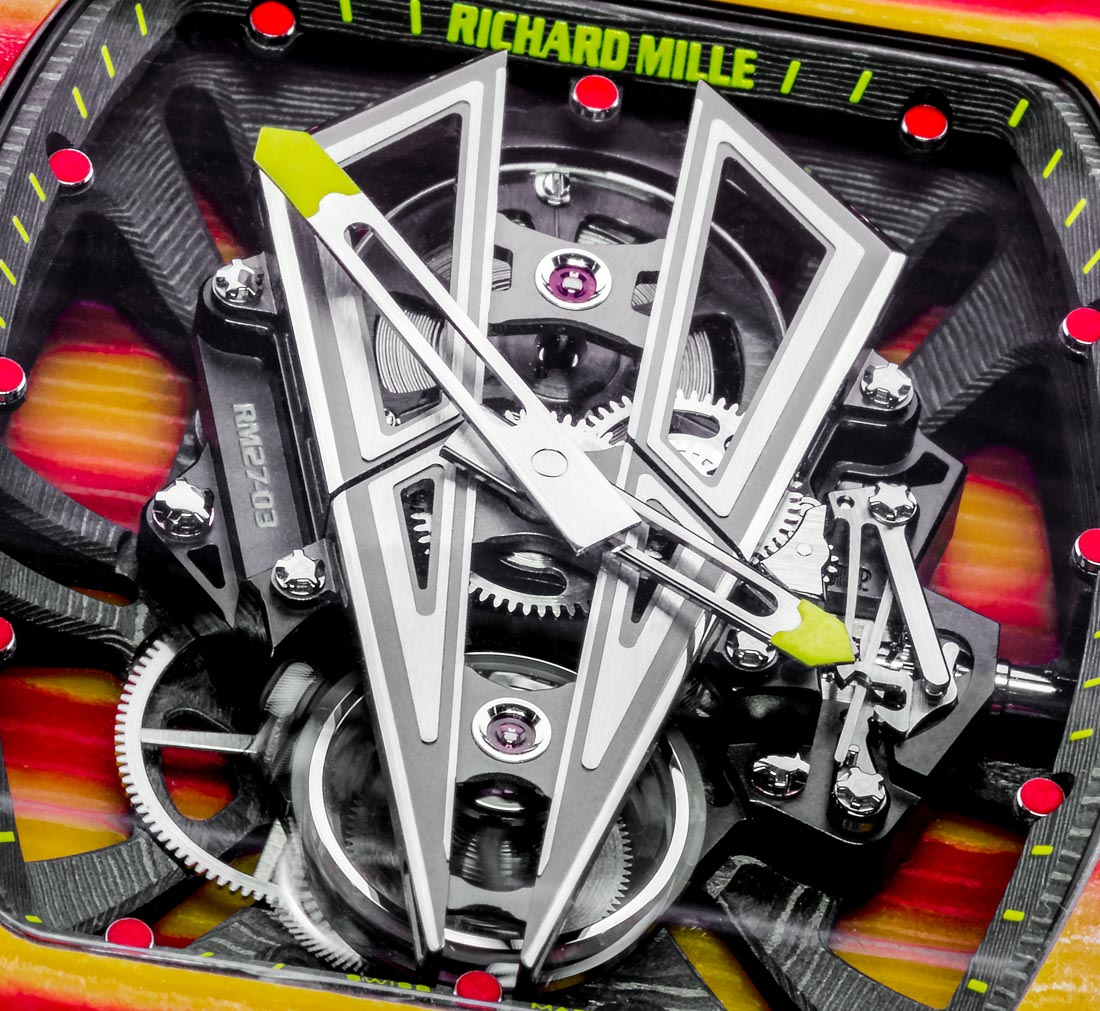 Specifically, what first baffled me about this new RM027 is the super-villain-logo style, V-shaped structural element of the movement… And then, second, the item of tech-data that jumped right out at me from the typically long listings of technical superlatives: 10,000 g’s (as in units of g-force). If you, like me, are thinking these two horologically highly atypical things are somehow connected, you are on the right track.

Although I am admittedly no physicist, I still feel safe in saying that 10,000 g’s is a hell a lot of g’s – fighter pilots with crazy g-suits and stuff can withstand about 0.1% of that. Now, to clarify – and I’m calling on Captain Wikipedia here to ensure that this explanation is correct – “The g-force (with g from gravitational) is a measurement of the type of acceleration that causes a perception of weight.”

To bring a real-life example to this: when a pilot really pushes the limits of his plane and himself (the planes actually last much longer than the pilots) and he pulls 10 g’s, that means that he feels like his body “weighs” 10-times what it actually does. When a Formula 1 driver corners with 3 g’s, the 2kg (5lb) helmet on his head feels like it weighs three times that much – and so on. 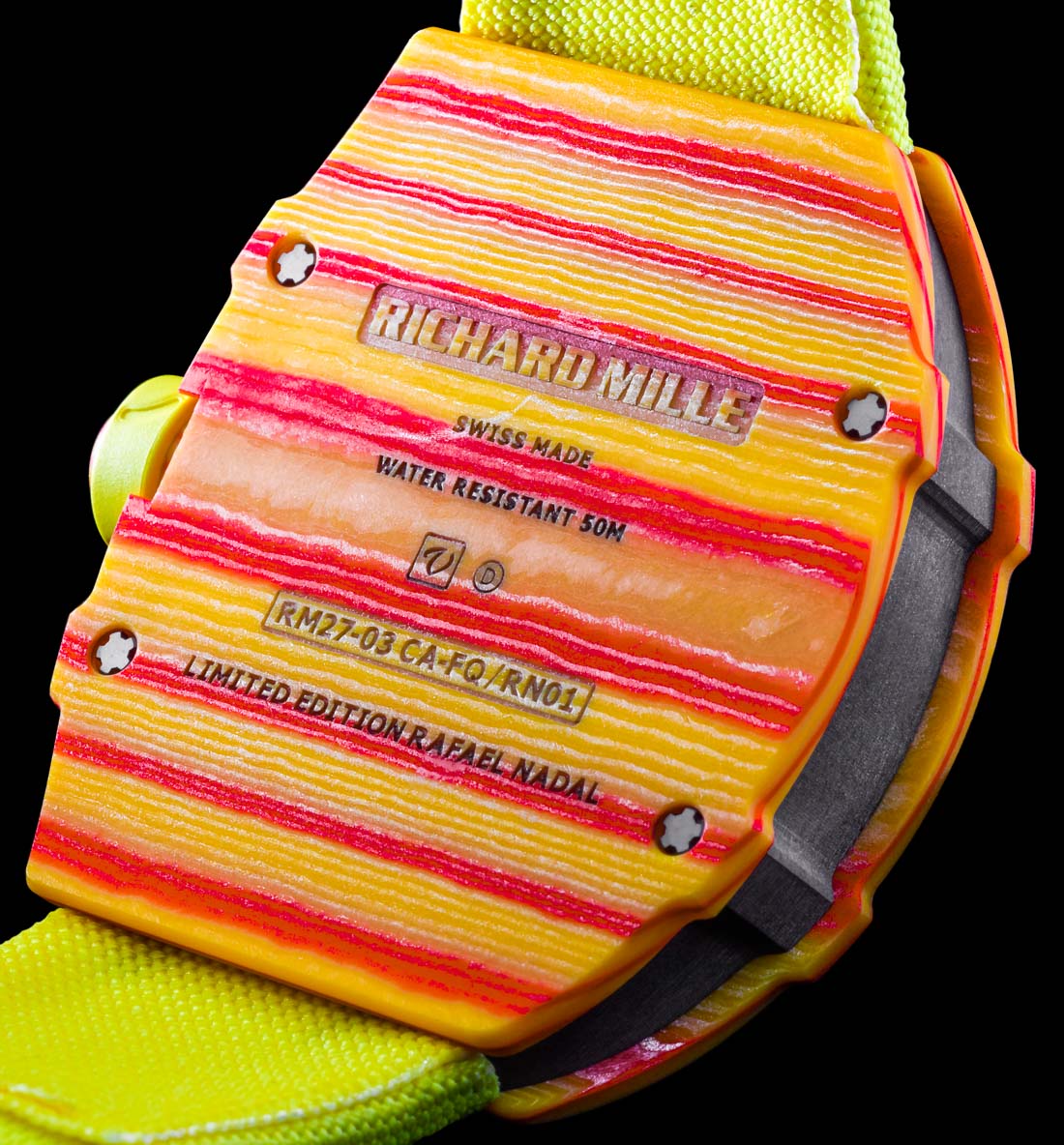 Needless to say, to be playing around with 10,000 g’s, we have to scale things down a lot – to the scale of watchmaking and its unbelievably tiny, yet highly functional components. When developing and fine-tuning the Richard Mille RM 27-03 Rafael Nadal “Tourbillon Shock Resistance,” the engineers at Richard Mille used a so-called “pendulum impact device” – something that, although present at select watch manufactures, also remains a rare and remarkably drastic method for testing the durability of a luxury watch. 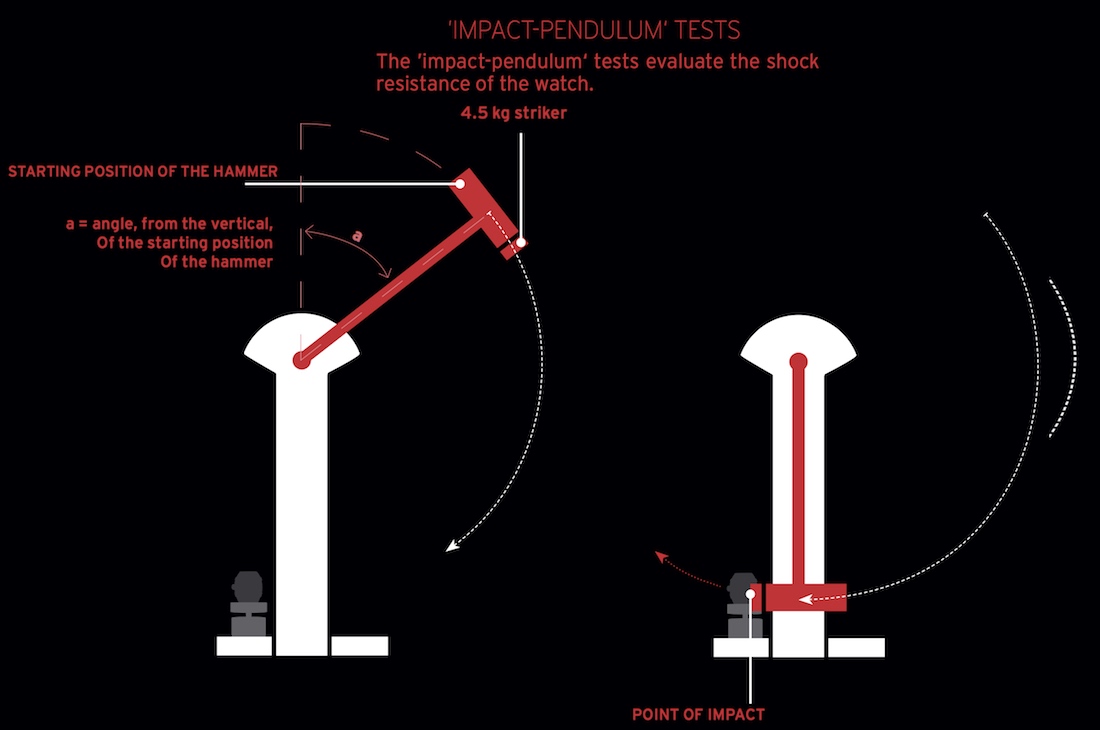 The pendulum testing device does what it says on the cover: it features a hammer-like pendulum that can be let go from a set angle, which in turn determines the force it will apply to the watch. Richard Mille say they have tested the RM 27-03 with its sapphire crystal facing towards the pendulum, as well as the case’s 9 o’clock and crown sides being the point of impact. The watch would then be catapulted into a net – I imagine the game of “let’s find the million-dollar prototype on the floor” would grow tiresome quite soon. 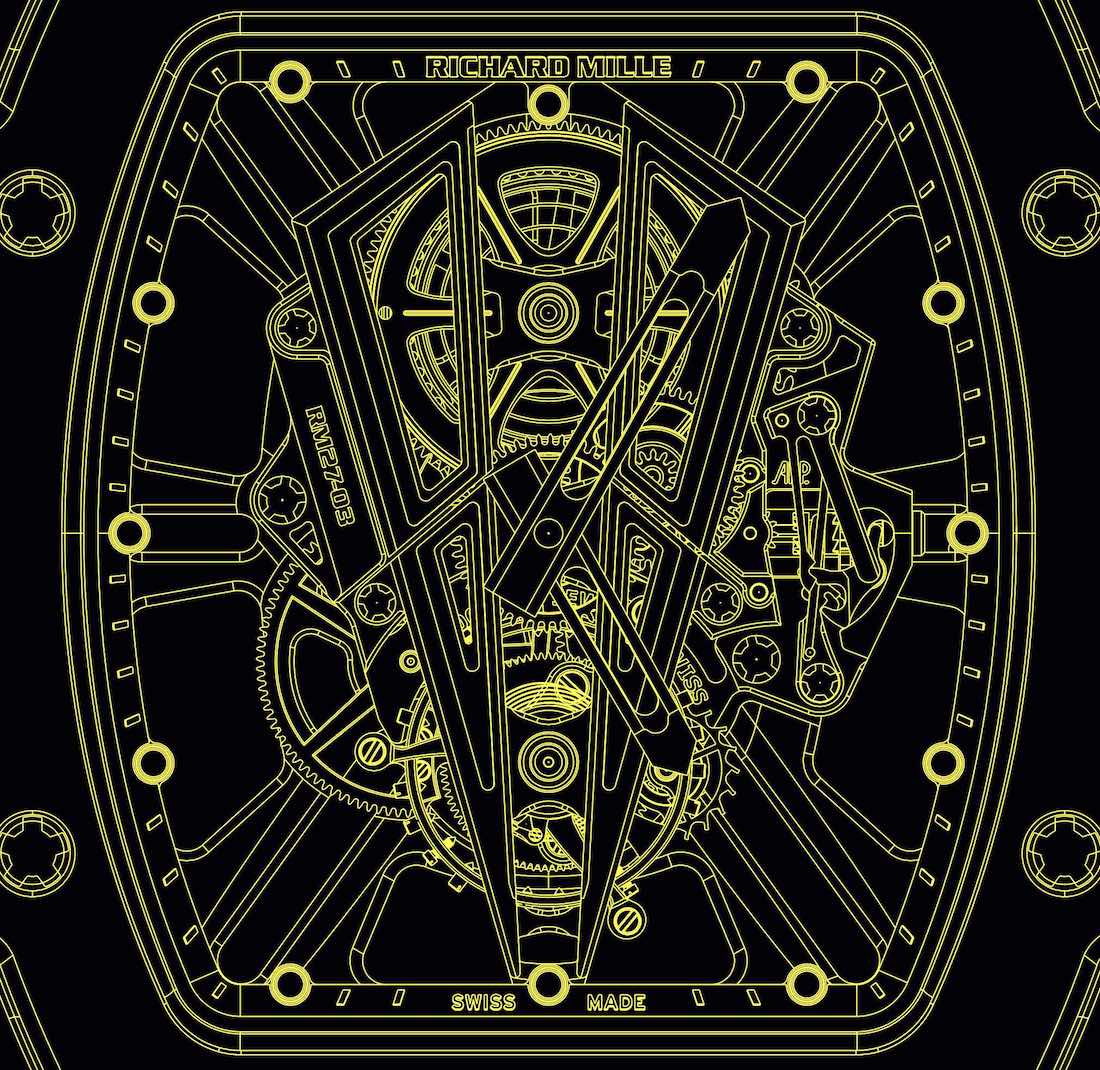 All this is done because, as Richard Mille explains, the energy from the shock of the ball encountering the tennis racket is directly transmitted to the watch, just like the accelerations and decelerations resulting from the many arm gestures the player makes during a match. Furthermore, “according to measurements recorded by a Swiss microtechnology laboratory, a watch absorbs around 60 g’s of linear acceleration during the serve of an amateur tennis player. It is easy to believe that given Rafa strength and his intense playing style, the linear acceleration produced in his case could easily climb well past 100 g’s.”

Clearly, the goal with this, and in fact all previous RM027 models was to prove that a high-tech version of a tourbillon-equipped mechanical movement can, if engineered properly, withstand extreme shocks – and, on the side, to remind everyone that Richard Mille has not given up on maintaining its position as the leader in bonkers-cool (and crazy-expensive) high-tech watchmaking. 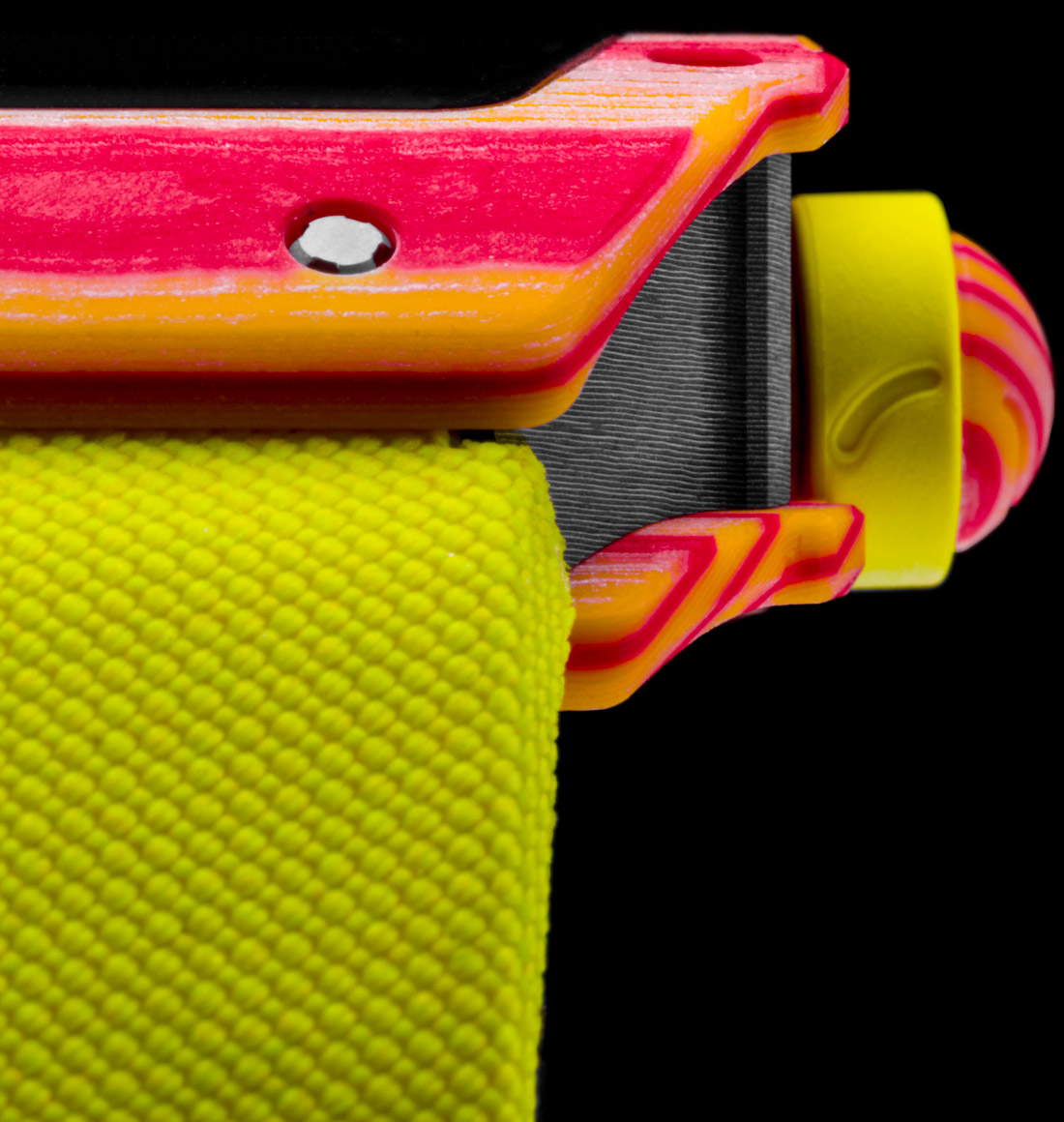 The Richard Mille RM 27-03 achieves its remarkable durability through a yet-newer take on constructing the case and movement as one singular unit. The case is TPT Quartz which is connected to a unibody baseplate in Carbon TPT, to which Grade 5 titanium bridges and reinforcements have been fitted. We covered the TPT Quartz case technology when we discussed the predecessor of this very piece, the RM 27-02, here.

While said TPT materials are mighty strong and feather-light, Richard Mille also had to vastly improve on the tolerances set for the manufacturing and assembly of the movement. Having visited a wide range of manufactures and chatted with their engineers and designers I know that the absolute majority of watch movements are produced with the smallest tolerance of 5 microns – that is 5 thousandth of a millimeter. This applies to the trickiest parts where the greatest precision is required, namely the drilling of the holes for the jewels: when two plates are laid over each other and they fall at the two opposing ends of the tolerance spectrum, the extremely fragile and small pinion of the wheel becomes much more prone to breaking upon impact – which is why that 5-micron amount has been set. 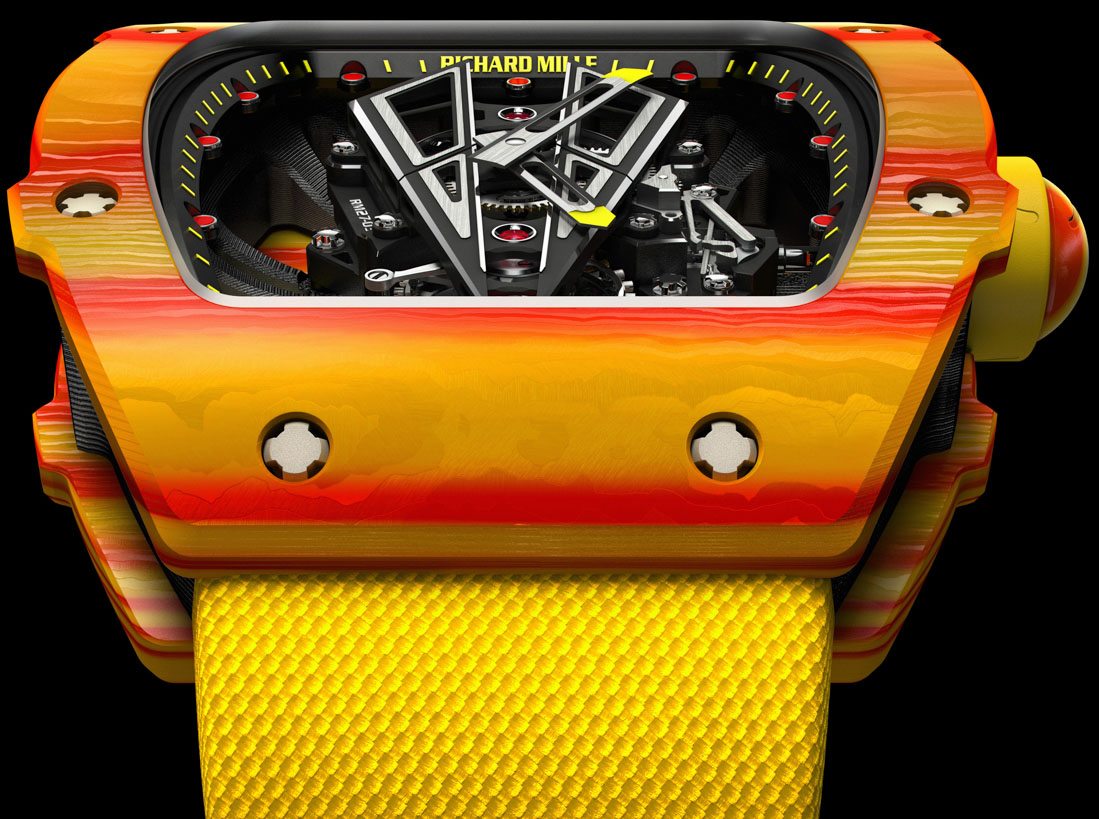 Now, the RM 27-03’s tourbillon and its parts – the weakest bits where a strong impact is first going to show its effects – are now crafted with a mind-blowingly small tolerance of just 1 micron. One. I presume they found that they can produce parts that are this close in tolerance, but with five times this much room to play with, they still met all previous expectations without having to discard the majority of painstakingly crafted components.

The accuracy with which the parts have to be manufactured is five times that of what it had been previously – given the literally microscopic scale of things we are talking about, an improvement of 20% or 40% would have been impressive, but to cut the tolerances straight to a fifth, that is exclusively Richard Mille levels of nobody-asked-for-this engineering… which is, as intangibly minuscule as it may be, also super impressive.