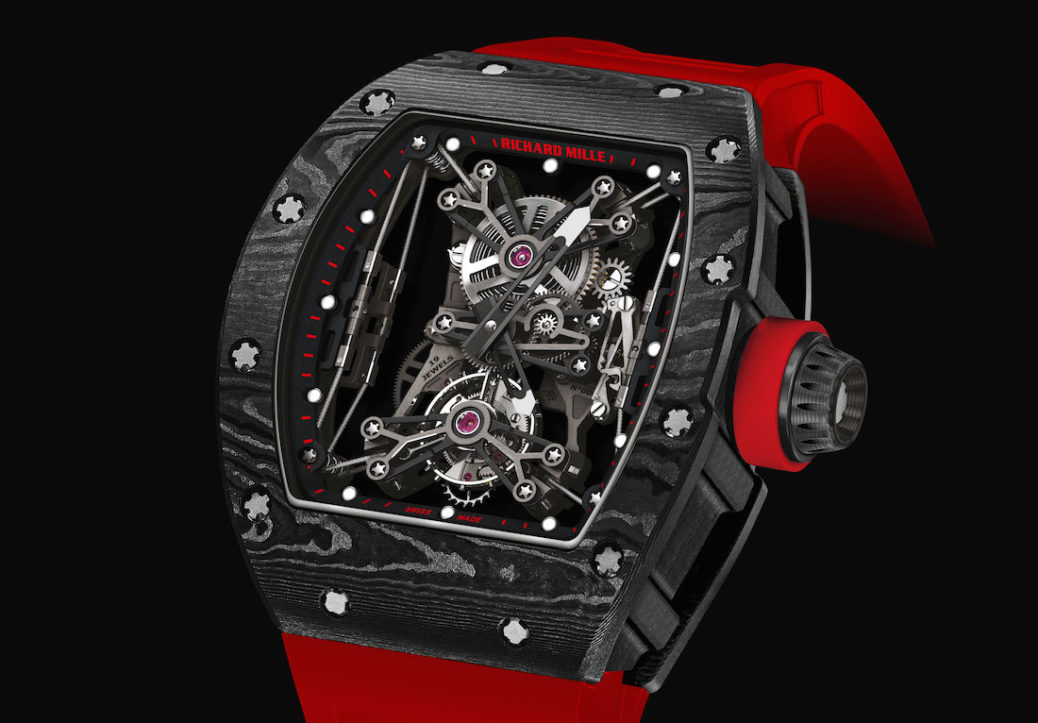 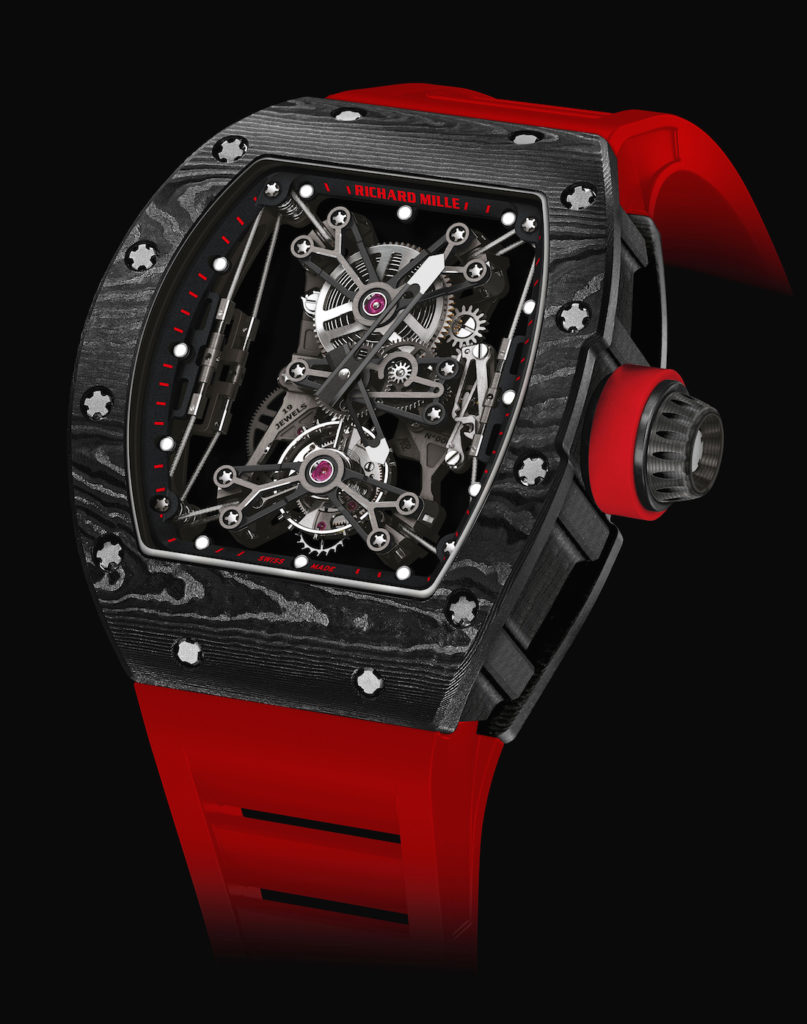 Employing Richard MIlle’s recognizable tonneau case shape, the Richard Mille RM 50-27-01 is 50mm lug to lug, 42.7mm wide, 15.2mm thick and crafted from NTPT (North Thin Ply Technology) carbon. Strong and lightweight, NTPT is constructed with thin layers of woven carbon fiber and resin that can allow for nearly any shape and, for the Richard Mille RM 50-27-01 Suspended Tourbillon Special Edition, a top grained finishing effect that looks quite a bit like wood. 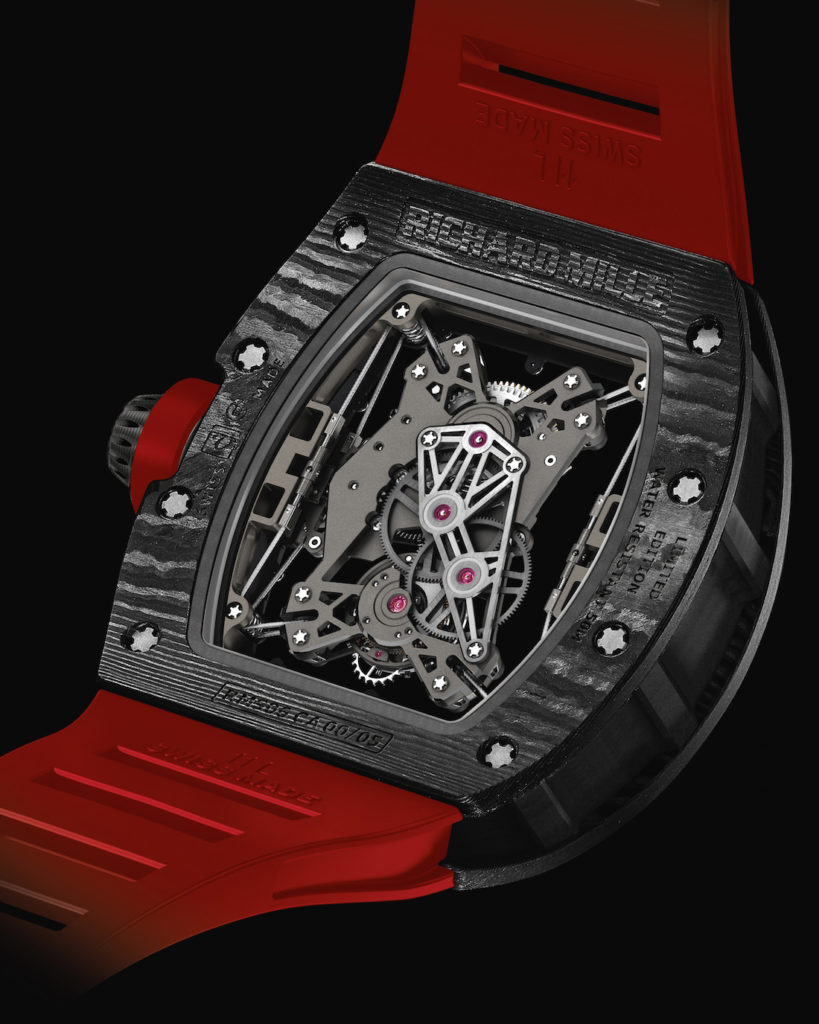 To further accent the wood grain, the top and bottom bezels are treated to an exaggerated rough machined matte finish. Adorned with a series of screws that secure the case elements, the Richard Mille RM 50-27-01 Suspended Tourbillon Special Edition is not an aesthetically revolutionary design for Richard Mille, but I do rather enjoy the grained finishing and the relationship between the red accents and the matching red rubber strap.

Though this is to be expected, the Richard Mille RM 50-27-01 rocks a really intense movement. Originally designed for the RM 27-01 Rafael Nadal, the caliber RM27-01 is a manually wound tourbillon movement with 45 hours power reserve, a skeletonized titanium baseplate and bridges made from aluminum-lithium. The entire movement is suspended within the case by four 0.35 mm braided steel cables, which attach to the baseplate of the movement via pulleys mounted in all four corners and mechanical tensioners that you can see at three and nine o’clock. All of this in a case just 15.5mm thick. 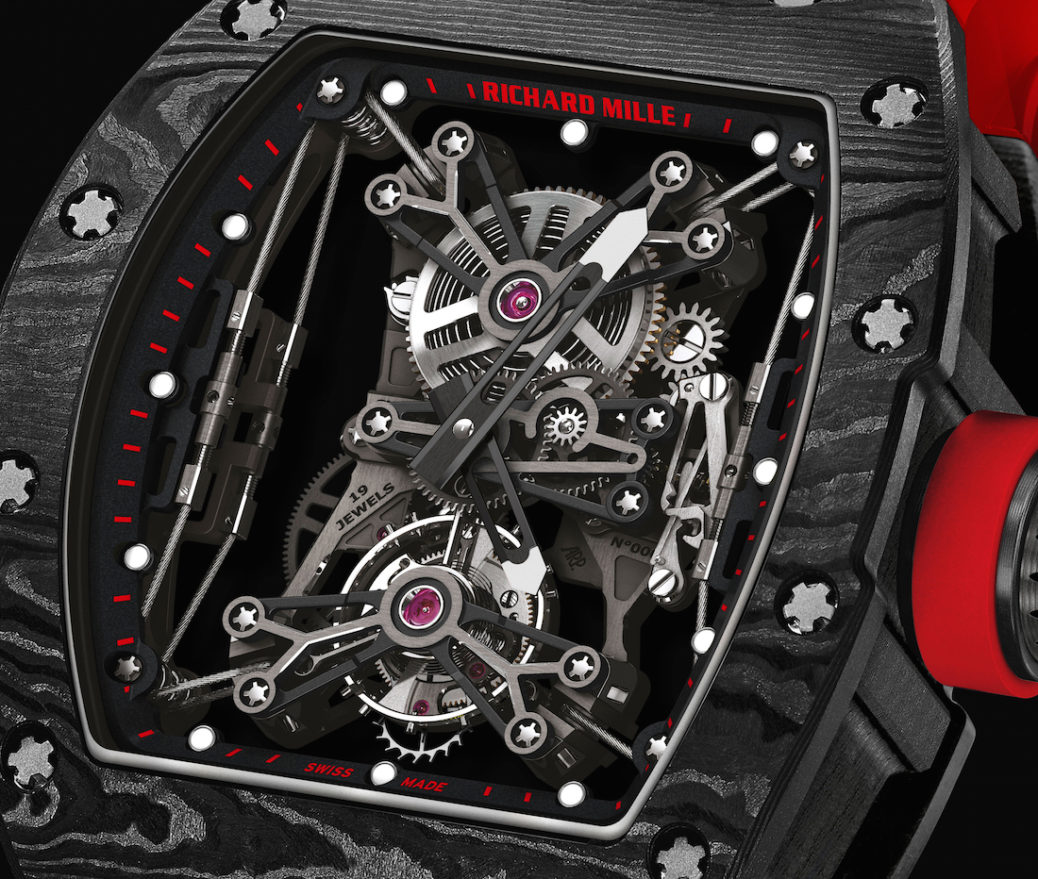 The Richard Mille RM 50-27-01 Suspended Tourbillon Special Edition’s design is open, architectural, and highly technical, with lovely details like the star-headed titanium spline screws supporting the bridges and the contrast between the black, grey, and silver tones with the purple coloring of the centrally displayed rubies for the tourbillon and mainspring. The dial is surrounded by a minute scale that carries minimal branding and further establishes the red and black color scheme. 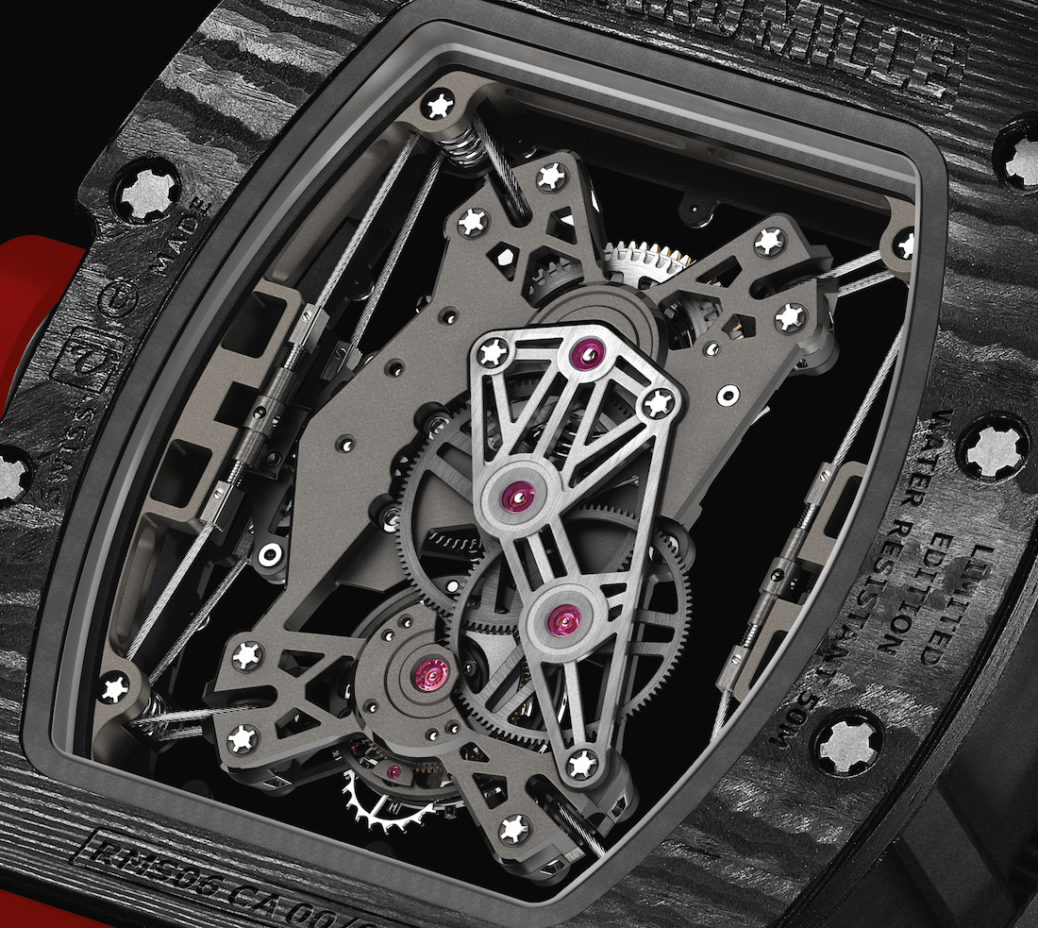 I’ve long felt that Richard Mille was to watches what Pagani is to cars. Fantastically over engineered, wondrously complicated, beautifully packaged, and astoundingly expensive. To that end, the Richard Mille RM 50-27-01 Suspended Tourbillon Special Edition is limited to five units and will be sold for US$800,000 exclusively through Richard Mille boutiques in Aspen, Bal Harbour, Beverly Hills, and Las Vegas. Regardless of whether or not you have $800k to spend on a watch (can you imagine?), you have to love Richard Mille just for creating watches like this. While I’ll never own a Pagani or a Richard Mille, in a world that often seems to be drowning in a bland sea of boring cars and dull watches, it’s reassuring to know that these watches even exist. richardmille.com