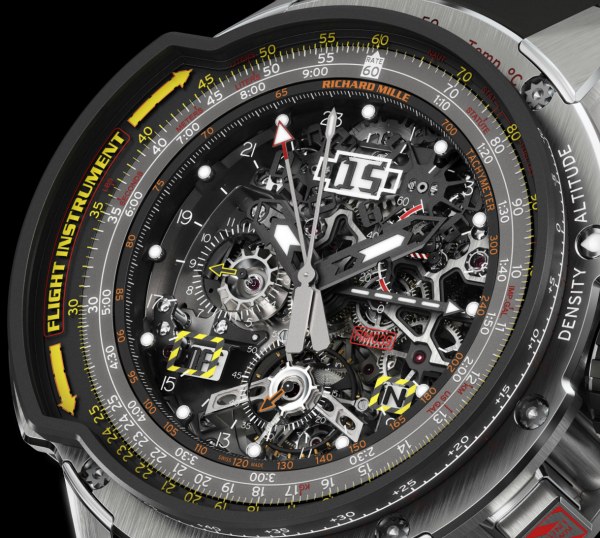 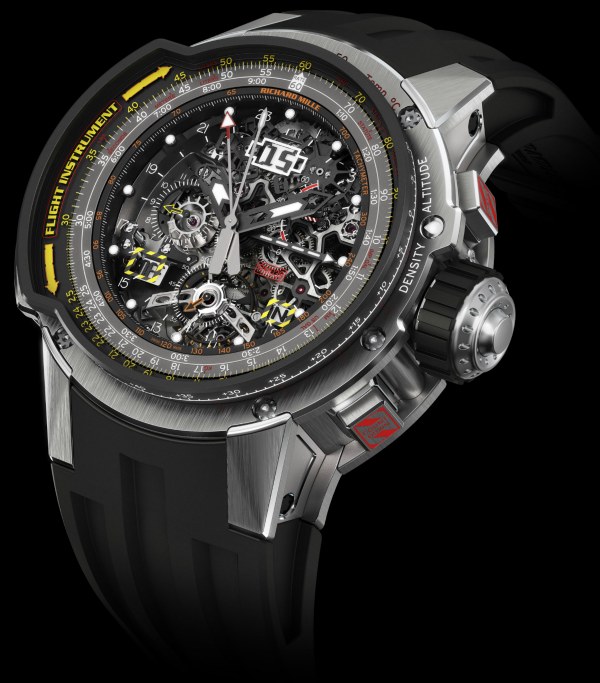 Richard Mille has once again broken new ground in luxury. Doing what no one else could do, they have done the unthinkable…. matched a tourbillon-based movement with a slide-rule bezel. Such passion! Limited to just 30 pieces, less than three dozen lucky souls will have the comfort of flying high knowing that Richard Mille is in charge of their most precious aviation measuring and calculating needs. Thanks to the new RM039 E6-B the prayers of all pilots have been answered.

The busyness of a slide-rule bezel is only matched by that of a Richard Mille exposed watch dial. Together they are like watching a Tokyo street and subway system somehow intersect. Ironically based on the Richard Mille diver watch collection, the RM039 is meant purely to be used above the ground. In fact, if I may offer my advice, it probably isn’t safe to fly without the E6-B flight instrument timepiece.

Calling it luxury isn’t fair. This is just the price of quality measuring instruments if Richard Mille has anything to say about it. The good news is that it (likely) won’t cost you more than the plane it is intended to help navigate. Offered right now in a titanium case, it won’t weigh that much either. The dive-style watch was a good model to build the E6-B on as it previously had a rotating bezel – which was modified into the slide-rule mechanism.

After a few minutes of inspecting the dial I suddenly forgot I was looking at a watch – but rather a machine mixed with the blood of racing horses. I then realized that I was trying to decipher what the watch movement did. In addition to the time, it has a big date indicator, flyback chronograph, GMT hand, countdown timer function, and a function selector. The movement is manually wound with a power reserve of about 70 hours. It is also much smarter than your 8th grader.

The crown of the RM039 looks like a miniature wheel of the monster truck I always wanted to drive around. Richard Mille knows just how to tease me. I am afraid my math skills aren’t adept enough to fully use this watch. Something about owning a camera with features I don’t use and won’t understand seems OK, but if I was to wear this watch I might have to enroll in pilot school to understand “Density Altitude.” Thank you Richard Mille for showing me just how little I know of the world. I know I can always rely on your horological wisdom to see me through the dark (and apparently clouds at 30,000 feet).

Richard Mille indicates that the RM039 with titanium lugs will be limited to 30 pieces. I supposed some other limited edition versions are coming as well. I expect future versions to sprout wings.