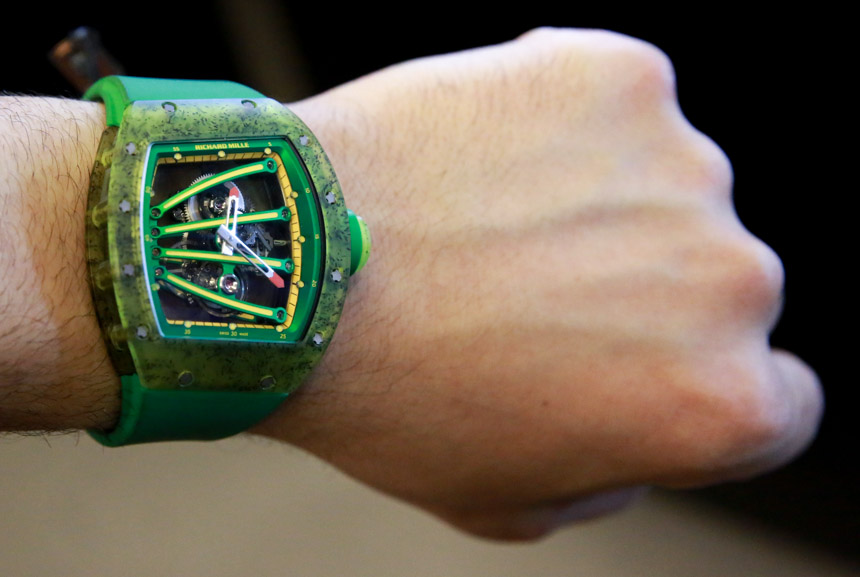 The nickname of this highly exclusive Richard Mille watch is “Mark of the Beast.” It refers to Olympic runner Yohan Blake’s track name which is “The Beast,” given to him as he sprints with his fists open as though brandishing claws. Blake is also a Richard Mille brand ambassador, the latest in a line of athletes that Richard Mille has forced to wear delicate expensive watches while they perform. This was little bit of marketing genius was popularized when people noticed Spanish tennis champion Rafael Nadal wearing a Richard Mille while playing (and winning). At about a half million dollars in retail value, this little court accessory was a bit of a shocker to many people.

The RM 59-01 Tourbillon Yohan Blake isn’t the first Yohan Blake watch. During the 2012 London Olympics Blake wore a prototype that looked like a Jamaican flag-colored version of the Nadal watch. That piece is actually being auctioned off for charity at the OnlyWatch 2013 event in September. It was not until after the Olympics did Richard Mille eventually release the limited edition RM 59-01 watch, and it sure looks different than the prototype. I hope Yohan loves green this much. 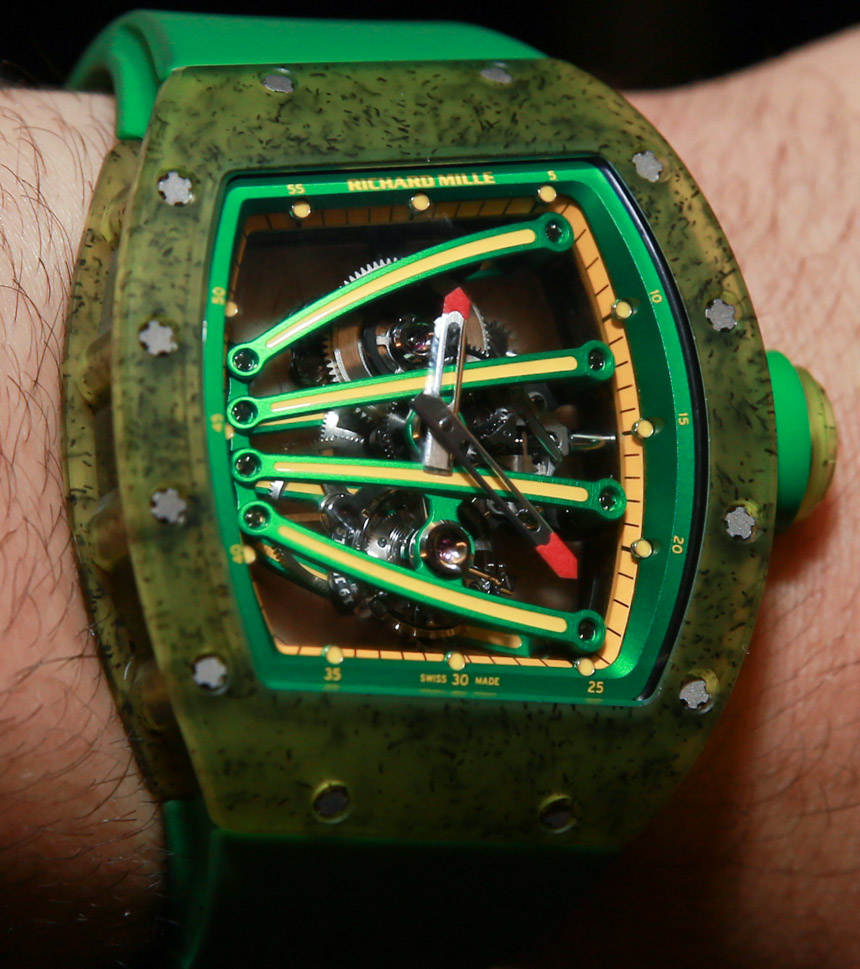 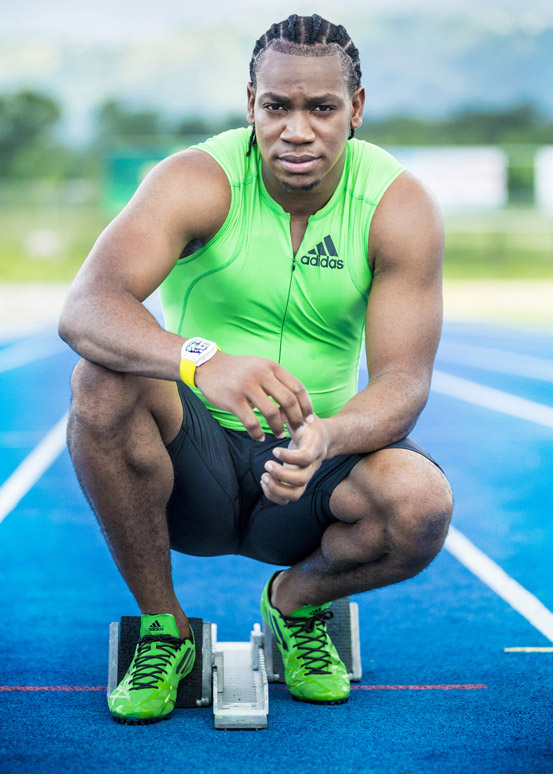 I ran into Yohan wearing his Mark of the Beast watch and a smile. He and Usain Bolt are sort of friendly competitors, coming from the same place and two very fast runners. I believe that Usain Bolt still has the speed edge. Bolt happens to be a Hublot brand ambassador (who created a watch for him). Though Yohan’s watch beats Usain’s in terms of price (for sure). The most noticeable element of the RM 59-01 watch is of course the four bridges on the front and rear of the movement. Richard Mille claims these are meant to look like claw marks. But with their little bulbous ends and green and yellow hue, they remind me a lot more of a frog’s foot. Perhaps a Red-Eyed Tree Frog, the tips of the hands would match the little amphibian’s eyes. I mean let’s be frank, this watch is frog themed. And every frog out there is probably proud, though they did have that cool MB&F HM3 Frog watch to honor them.

After you check out the unique bridge design you no doubt notice the case material. Richard Mille once again seeks to offer something new with the translucent green case on the Tourbillon Yohan Blake. To me it looks like crystallized green tea, complete with leaf particles. No, in fact those little particles are “carbon nanotubes,” and apparently suspended in the injection molded polymer, they give the case 200 times more “resistance” than steel. Though Richard Mille isn’t totally clear on what it is more resistant to. I’d guess shock maybe? 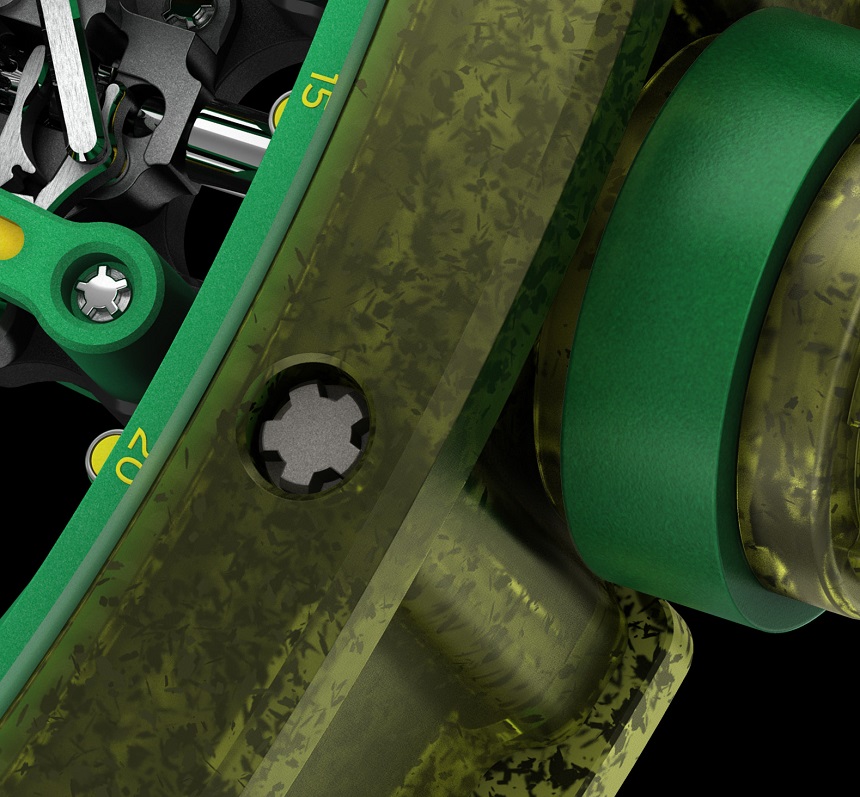