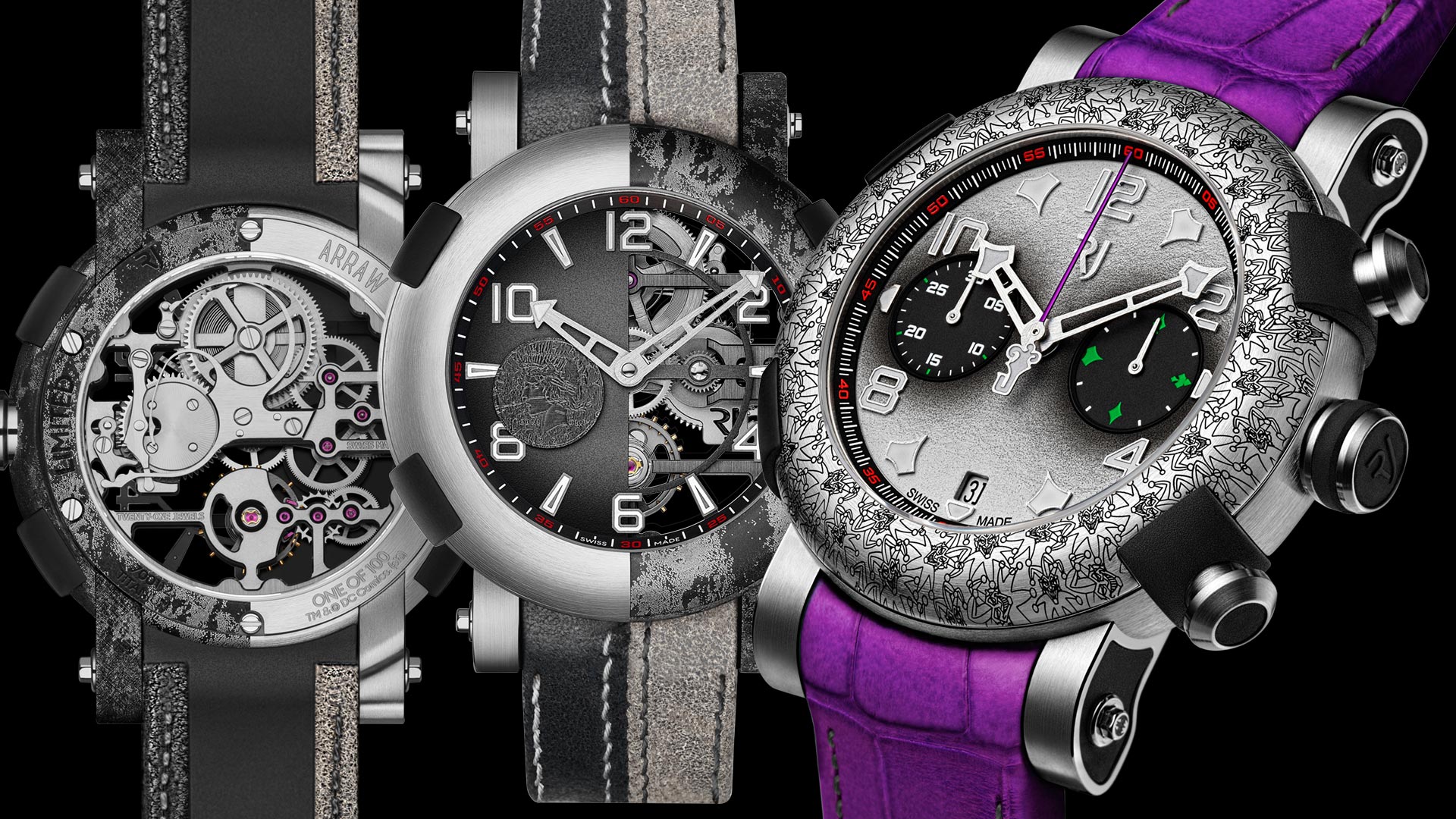 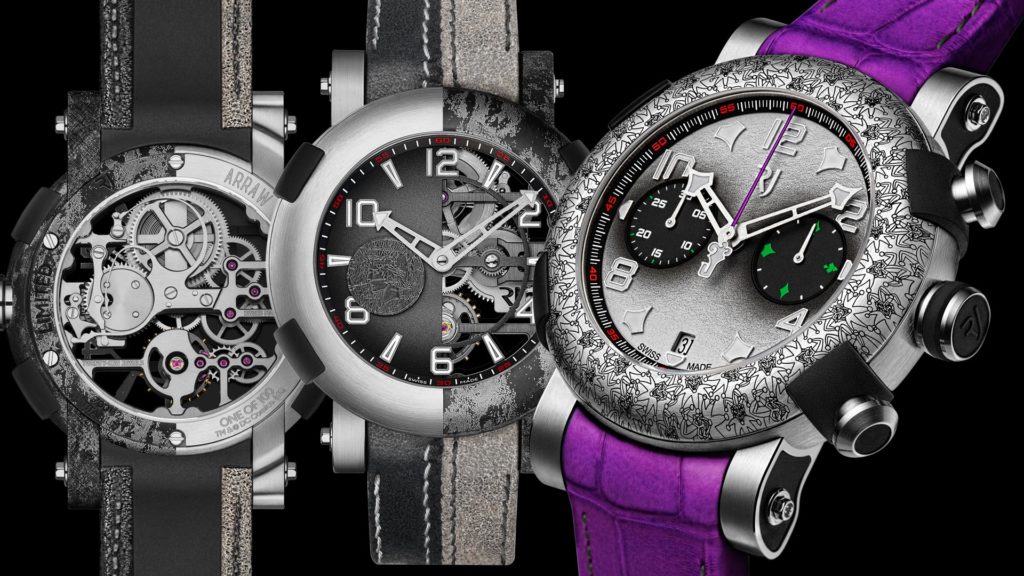 Why so serious? I imagine RJ Watches had to have begun with this premise when designing their new RJ x DC Comics Villains releases to the new-ish ARRAW collection. Following 2016’s Batman-DNA that we saw hands-on here and the more recent Skylab Batman, these limited edition watches explore the darker nature of the Gotham universe with two iterations of our favorite Dark Knight villains, Two Face and The Joker. Each watch features its own unique look. The Joker being a chronograph and featuring some funky strap colors in the obvious green and purple with an engraved case depicting a “chaotic” joker motif, and Two Face utilizing a skeletonized movement and, er… half face. 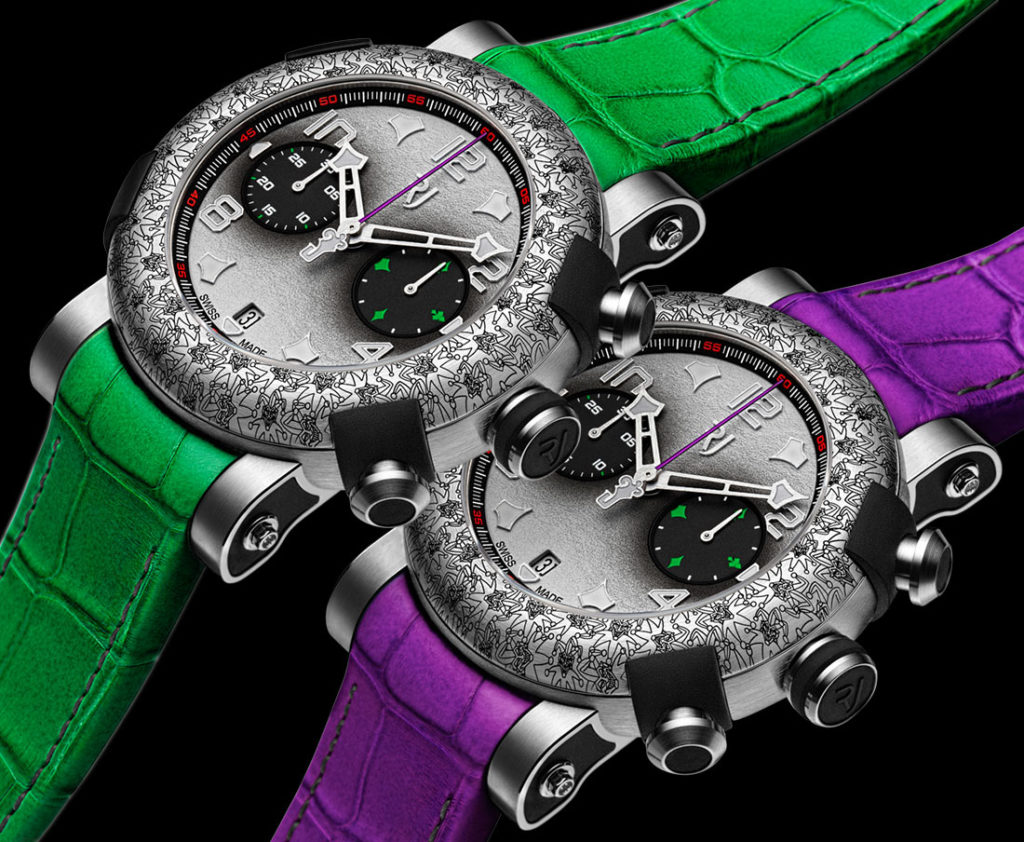 Let’s start with the Joker. The satin-brushed titanium case measures in at 45mm and features RJ Watches (formerly known as Romain Jerome) “signature” rubber bumpers on the rounded case edge, pushers, crown, and lugs, with a water-resistance of 100m. A neat little detail is the laser-engraved bat symbol on the lug screws – something I easily missed in the original glance at the press images. The obvious draw to this watch, is the case engravings. Laser etched into the bezel is a slew (I counted at least 50) of “Chaotic Joker” motifs. While I find the engravings cool, I think there were many other routes they could have gone with making a Joker-inspired watch that are a bit less… goofy. RJ Watches does high quality engraving and enamel work, and I guess I can see the reason for this look, but I can’t help but feel a bit underwhelmed by these engravings being the most prominent Joker-themed element of this watch. 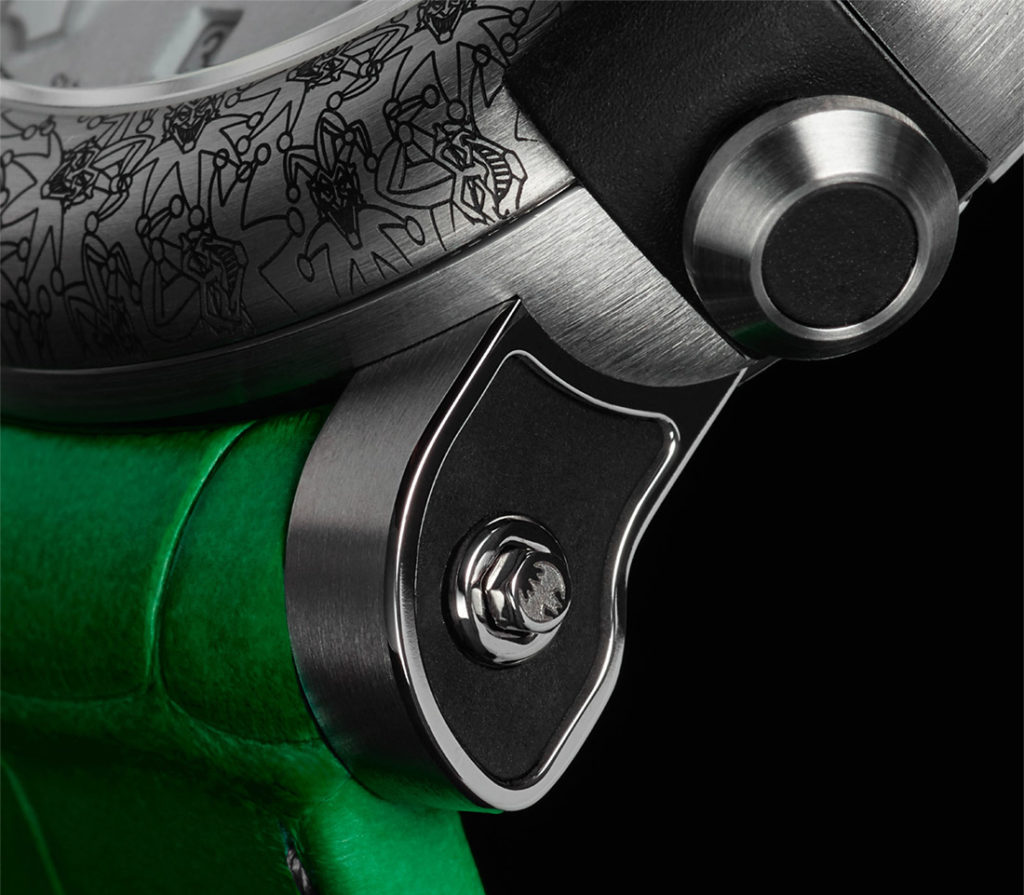 Beneath the sapphire crystal, the dial is cool, though I feel it is missing some opportunities to incorporate Joker references. The “plastered” dial plate is hand painted which, according to RJ Watches, means that no two watches will have the same hue to the finishing. It’s supposedly drawing from the Joker’s makeup, and I guess I can kind-of see it, but there was room for a lot more to play with if you’re going to use his makeup as the main influence of the watch. One of the chronograph registers features the suits of playing cards while the other features some out-of-place racing font. The applied indices pull from a stylized take on a playing card ace motif (also looking kind of like the bat symbol), and a date window sits at 6 o’clock. 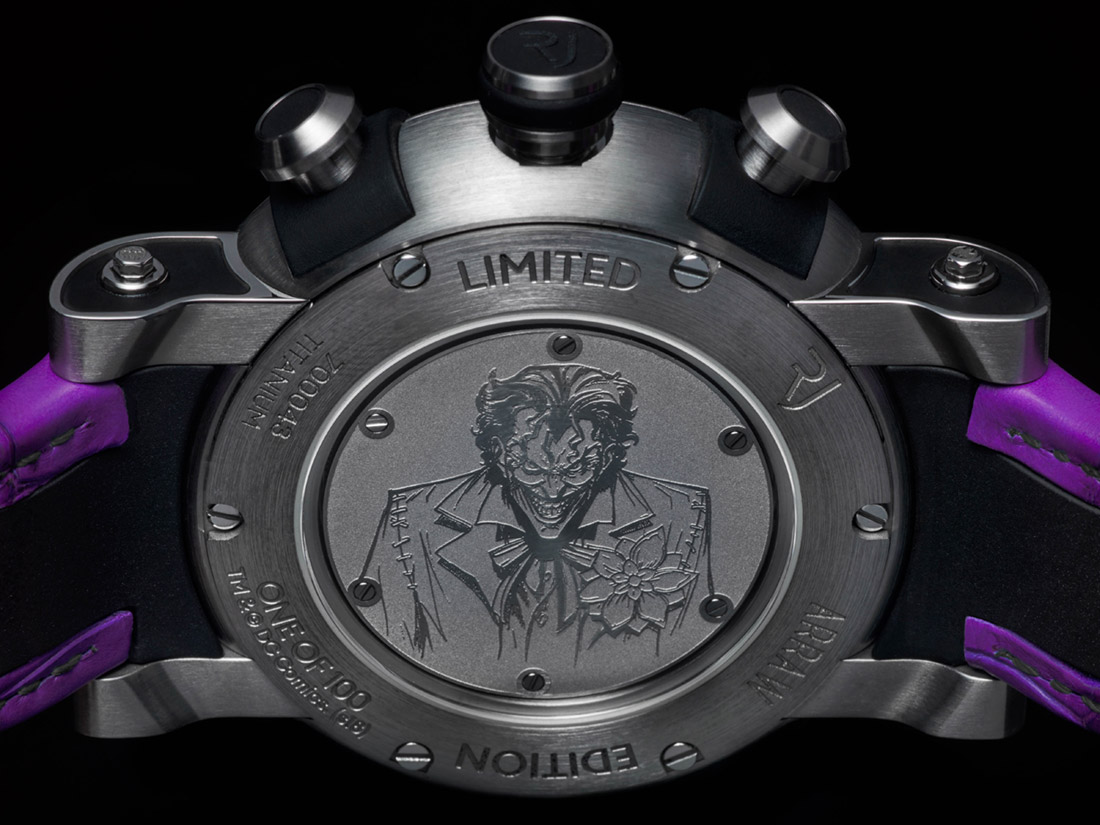 The handset is by far my favorite part of the watch. The skeletonized hands are thick, legible, and a good length with the tips featuring the same ace shapes. The purple seconds hand and Joker’s signature “J” counterweight are (to me, anyway) the focal point of the dial. The red seconds indicators on the chapter ring should have been purple or green, as I can’t quite understand the decision to go red. Overall, it’s not very busy, which leaves a bit of room for the bezel engravings, though I really am also underwhelmed by the Joker influence on the dial. 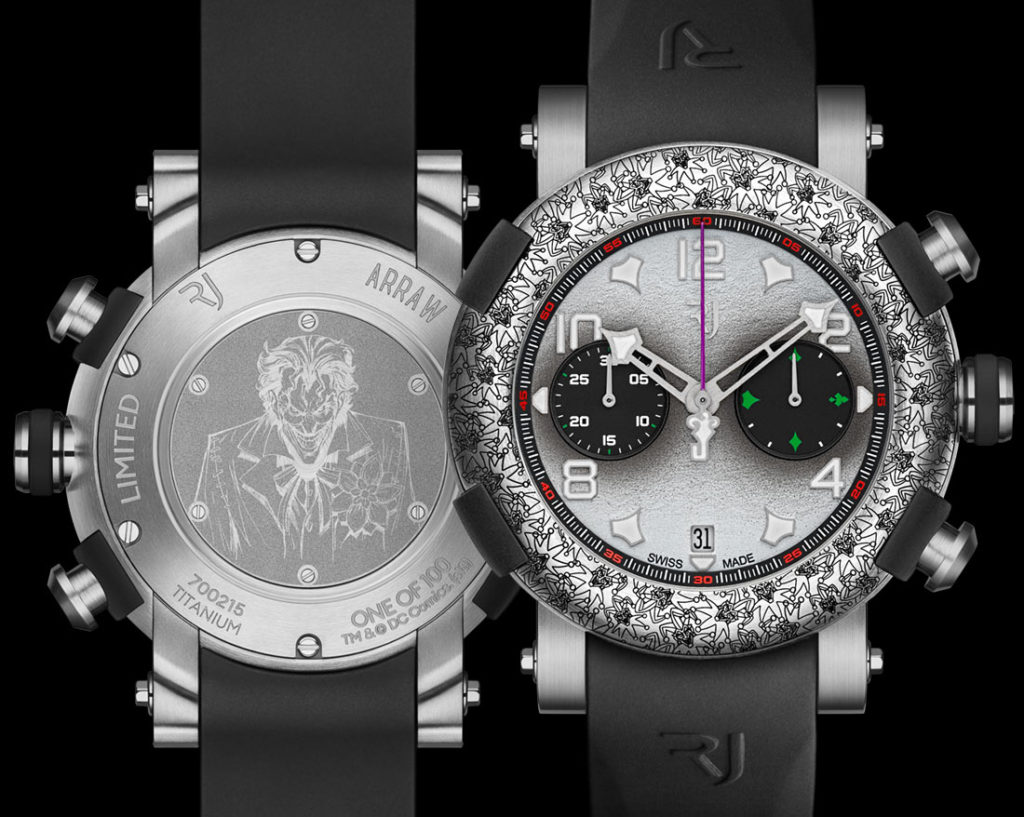 Inside RJ ARRAW Joker is an RJ2042 self-winding mechanical chronograph movement. While there isn’t much info on it, this is likely a modified Concepto movement. The RJ2042 beats at 4Hz with 52 jewels, and features a power reserve of approximately 42 hours. The case back, however, is a solid one with a portrait engraving of The Joker – so you won’t get a glimpse of the movement anyway. The watch will feature a choice of purple or green alligator leather with contrasting stitching and a titanium deployant buckle. 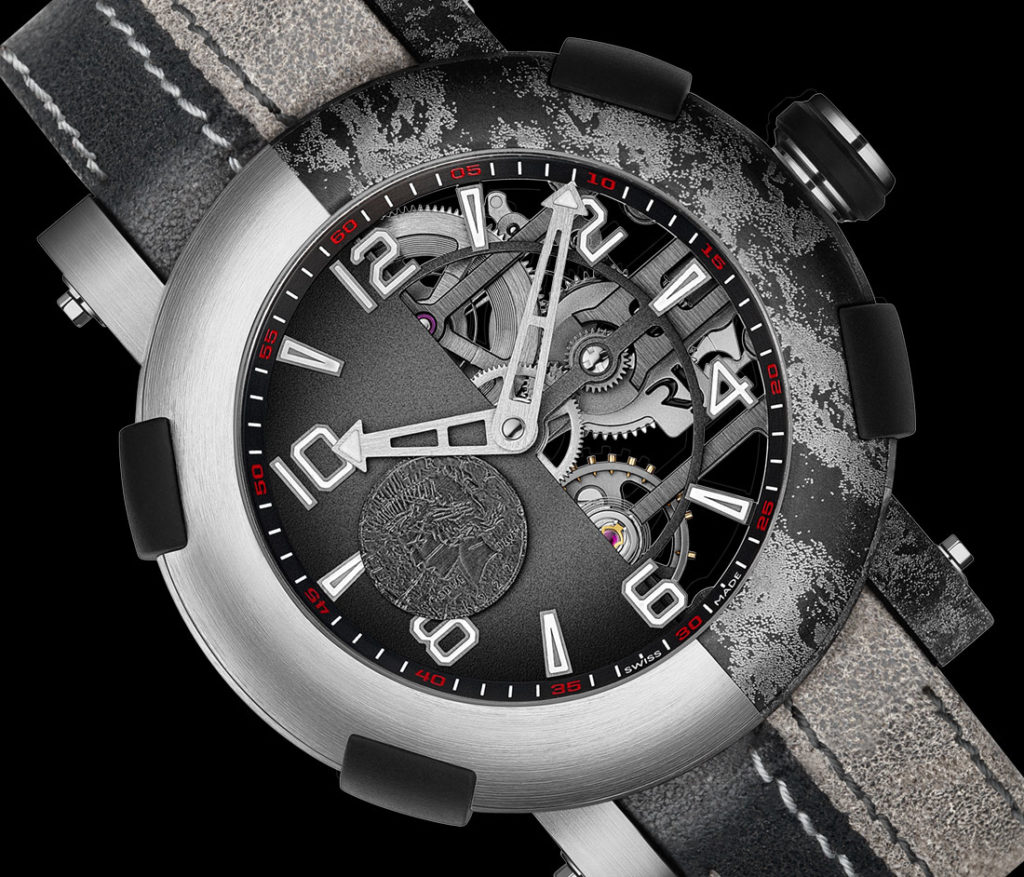 The RJ Two-Face watch, on the other hand, is fascinating to me. The villain here is Harvey Dent, who was horribly disfigured by acid on the right side of his face – driving him mad and birthing Two-Face. As such, this watch features two “sides.” The watch utilizes the same ARRAW case, measuring in at 45mm (100m of water-resistance), utilizing titanium for the material, and featuring sapphire crystal. The right side is satin-brushed, clean, and uniform – what Harvey Dent, the DA of Gotham City, used to be. The right side, however, is distressed and aged via a method of laser engraving giving a literal dual faced look to the case. While busy, yes, it’s surprisingly coherent considering the themes it’s working with. 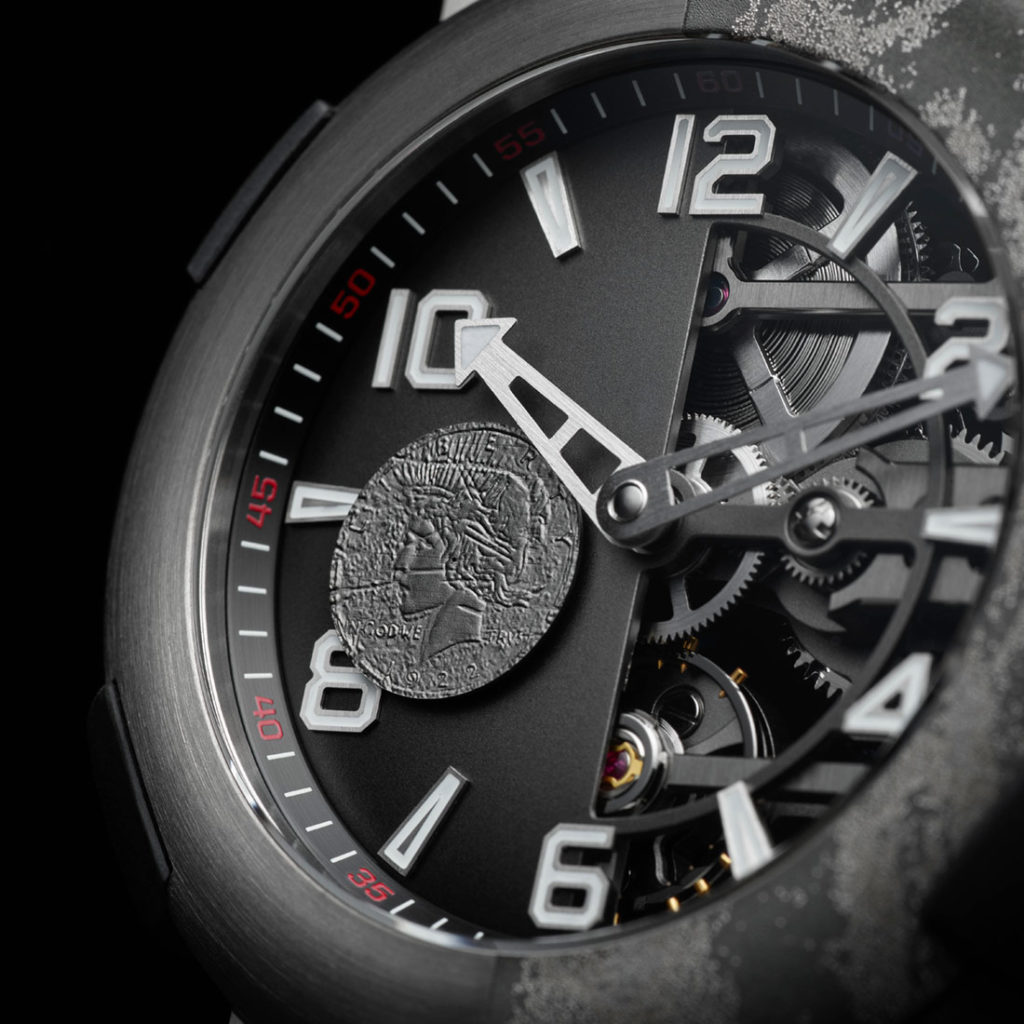 Continuing the duality theme, the dial also features two sides. The left side is again, clean, uniform, and simple with the exception of Two-Face’s signature coin. At first glance, I thought perhaps this was a sub-register for a chronograph, but it’s actually a turning seconds register. A cool nod to Two-Face’s penchant for making life-and-death decisions on a coin flip. The right side of the dial features a skeletonized look into the movement itself – which is PVD-coated and brushed to look exposed. The light-colored indices contrast nicely against the brooding piece, and the only splash of color on this mostly monochromatic watch comes from the red seconds indicators on the chapter ring. 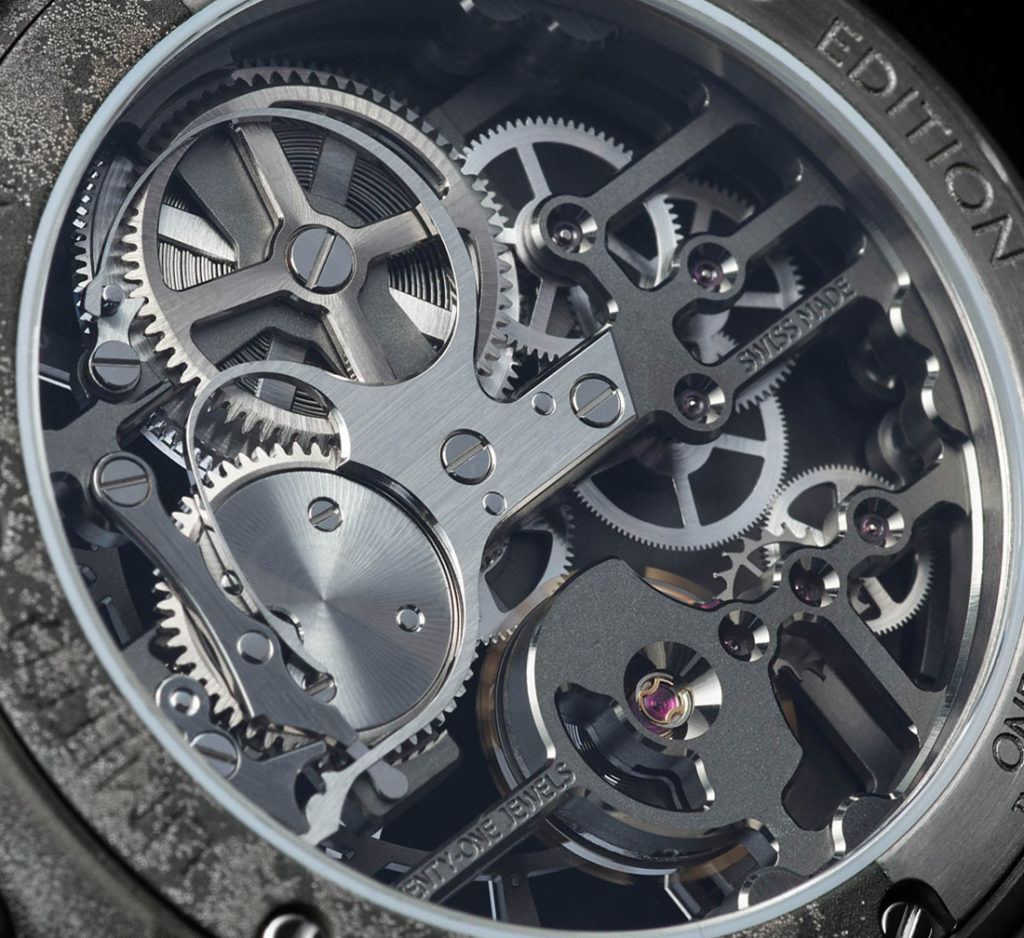 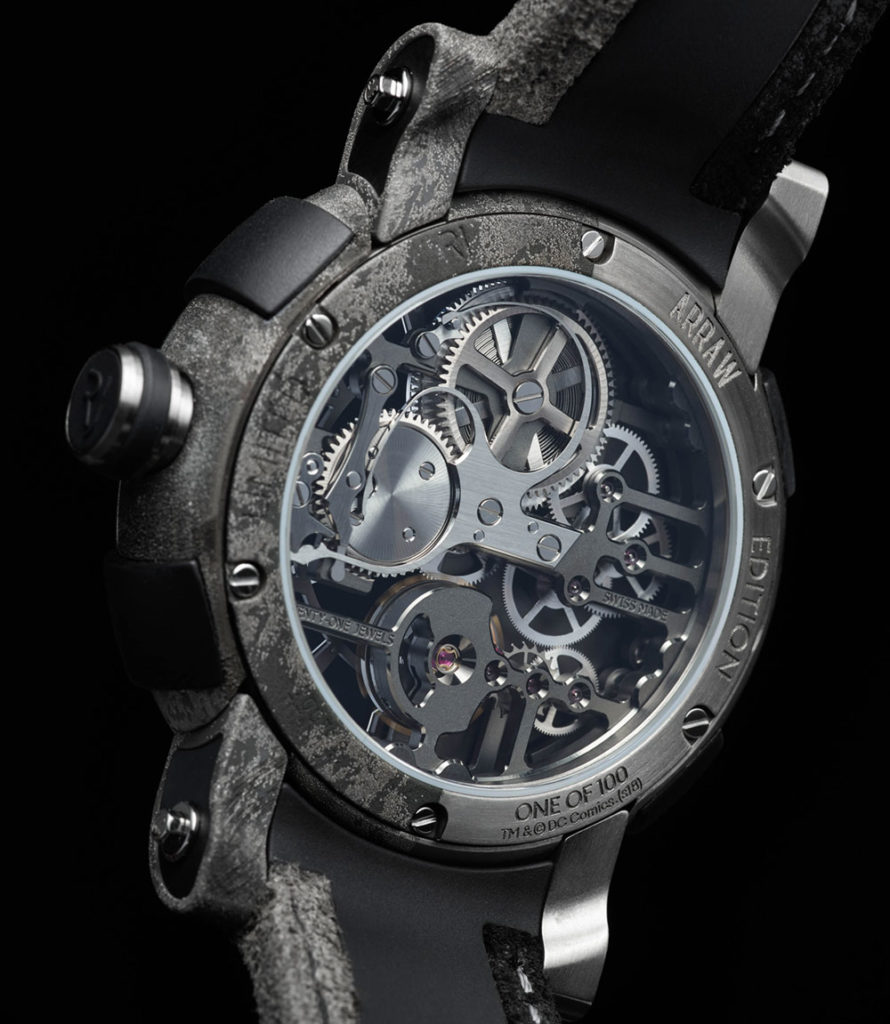 Halfway exposed in the front, and fully exposed through the sapphire crystal on the back, is the superbly simple RJ004-M movement. Again, likely a Concepto base, the hand-wound movement features 21 jewels, beats at 4-Hz, and has a power reserve of 48 hours. The strap is another pretty cool aspect of the watch. The calfskin leather features two contrasting grey and black leather strips that are wrapped around and connected in the center of the top leather, further appearing as if half the watch has been melted by acid. According to the website, it’s full calfskin, however based on these press images it does look to have RJ Watches common hard rubber belly. 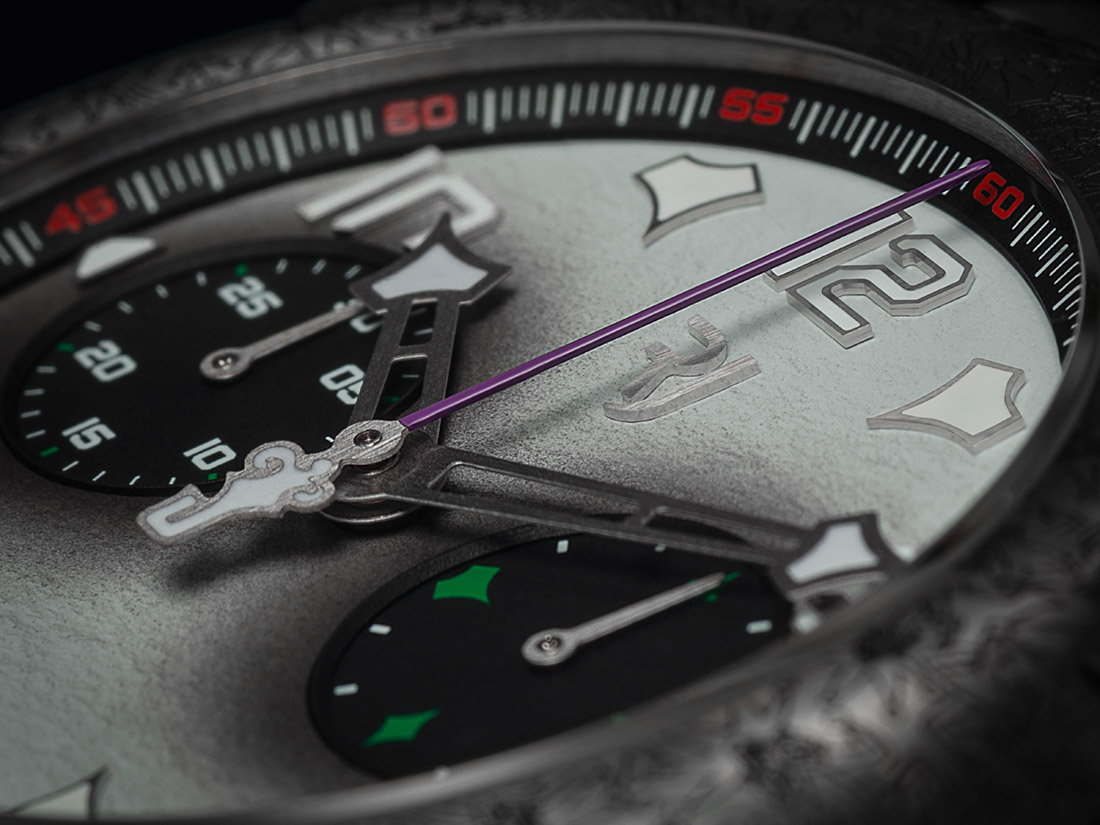 Overall, these are solid additions even if I’m a bit disappointed in the Joker piece. I feel there is way more material to work with for this piece to be the end result of a Joker-influenced watch. We already have the lighthearted Konstantin Chaykin Joker Watch, so I feel there was a lot more room for a brooding take on the Joker – something I feel RJ Watches has more than the capability to pull off. With the complexity of the character, being one of the darkest and most twisted villains in comic book history, this seems a bit jumbled, without enough coherent flow to the influence it’s pulling from. 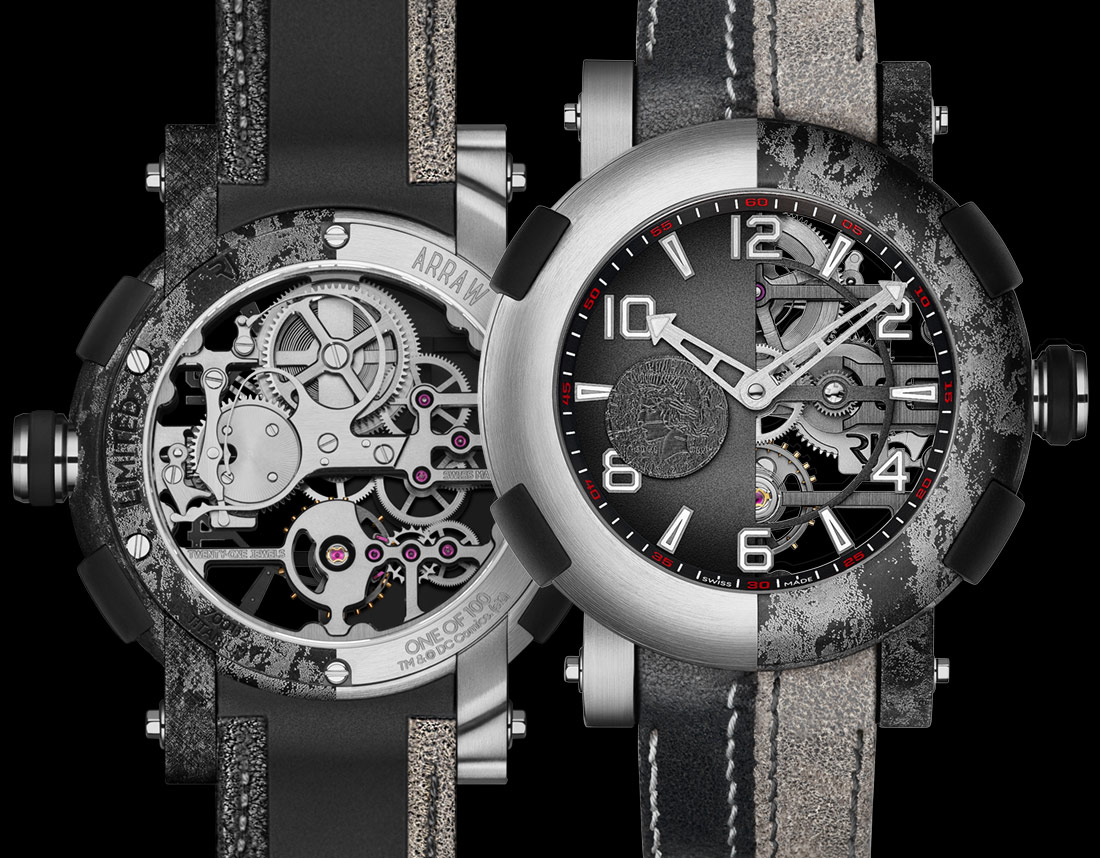 As for the RJ ARRAW Two-Face watch, this is one of the most wild and original watches I’ve seen recently. I’m certainly not the biggest Batman fan out there, but I can appreciate that this watch looks and feels like something designed by a fan of the villain. I’m a fan of the DC collaborations that RJ Watches has put out, and I’m excited to see what other villains they have up their sleeve. Price for the RJ DC Comics Villains ARRAW The Joker will come in at a cool $17,900 while the RJ DC Comics Villains ARRAW Two-Face will run quite a bit more at $22,700. Both will be limited to 100-pieces each. rjwatches.com