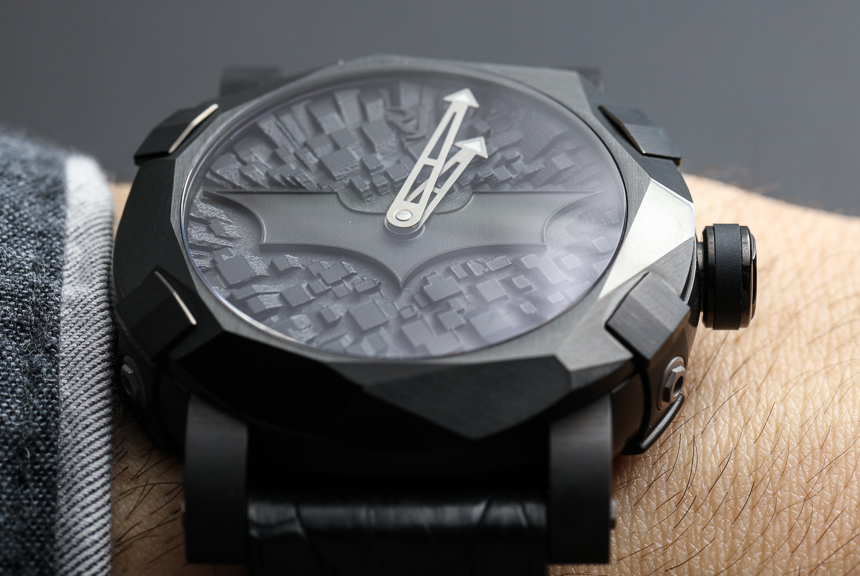 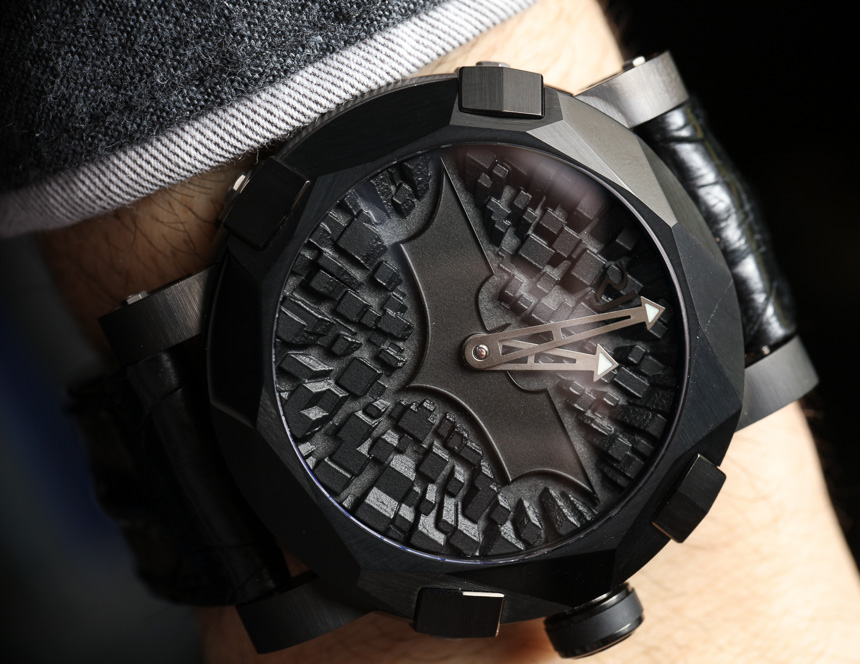 Romain Jerome partnered with DC Comics to release the Batman-DNA watch back in late 2014, just in time to commemorate the 75th anniversary of the first Batman comic. Now, we see the release of the Romain Jerome Batman-DNA Gotham City watch, showing the familiar Batman logo soaring above a 3D-looking Gotham City – at least that is the idea. Perhaps the release time for this coincides with Romain Jerome cementing their support for the Dark Knight in the wake of the Superman v. Batman: Dawn of Justice movie, but as the watch doesn’t show anything new or innovative from Romain Jerome, the timing leaves the whole thing feeling slightly more gimmicky than it should. In many areas, Romain Jerome continues to invigorate our horological senses with new pieces such as the exotic and complex Moon Orbiter GMT. However, while the new Romain Jerome Batman-DNA Gotham City watch fails to deliver much new artistically or technically, it doesn’t fail to demand a top-shelf price meaning it is aimed at serious collectors of watches or the Batman genre. 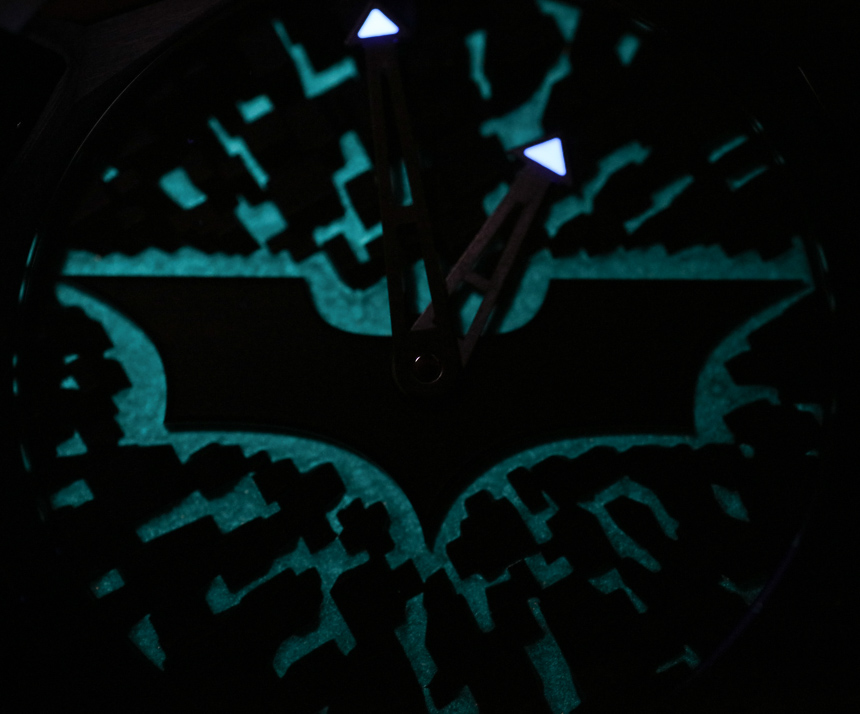 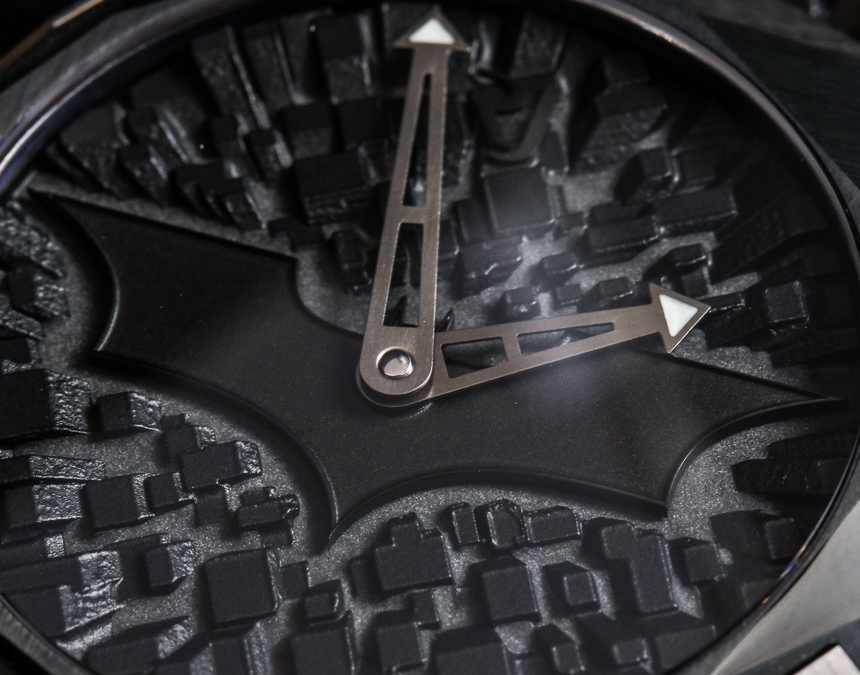 Diehard Batman fans with disposable income will buy one of these nearly $20,000 pieces depicting a “night view” of Batman looming above a 3D Gotham City. The coolest part of the watch more or less requires a UV light to view. The cool but lightly applied “blue emission” lume is a fun yet unrefined concept meant to give the watch more character. At the end of the day, this is a neat-looking case with a large Batman logo on the dial. Our hope is that given that DC Comics seems to like working with RJ, the brands will be able to come up with something more interesting for those of us wanting a story that is more than skin deep the next time around. 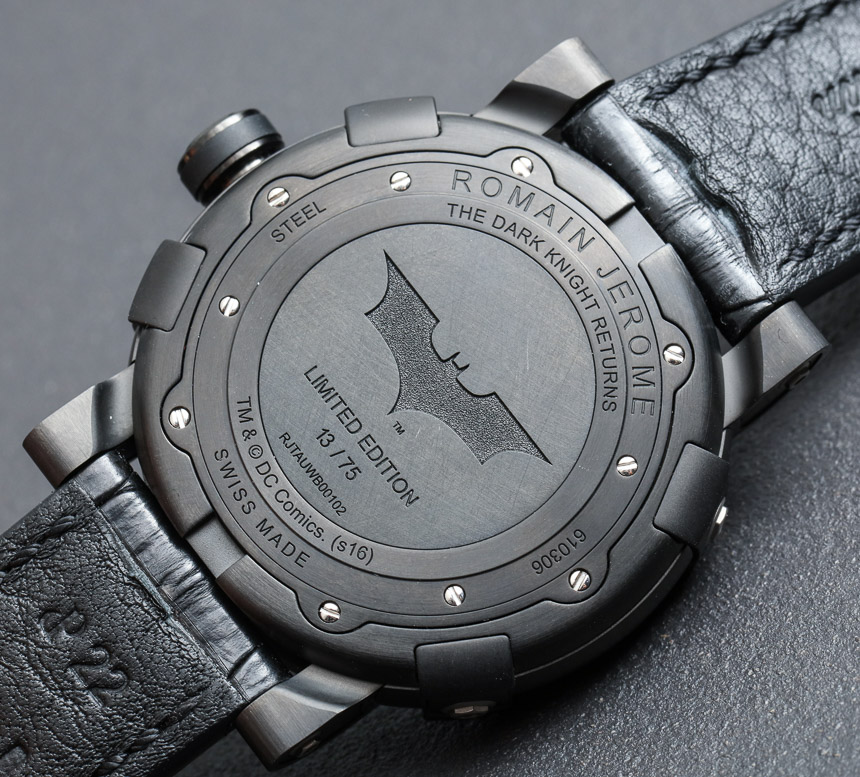 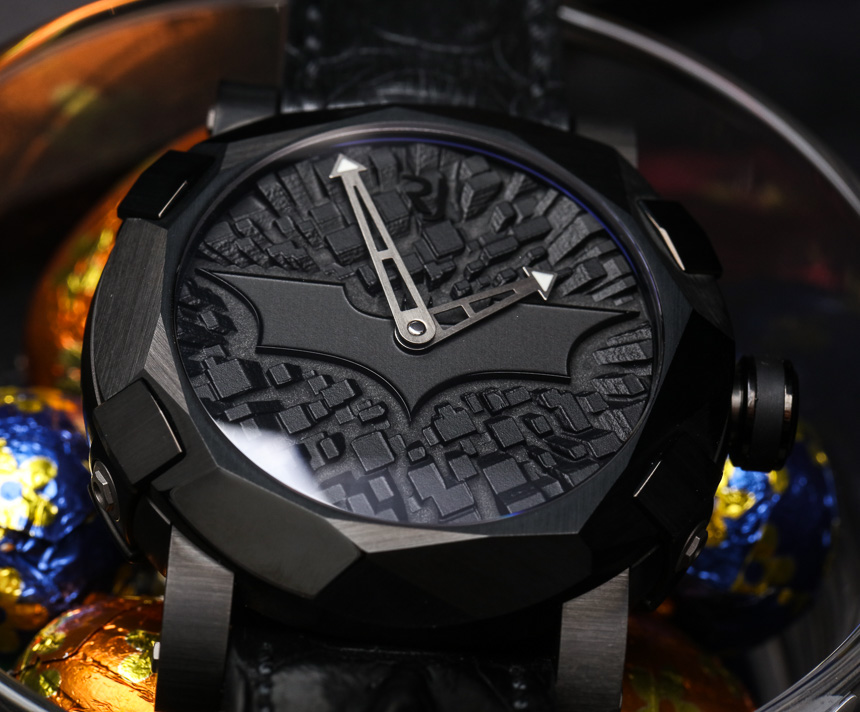 The Romain Jerome Batman-DNA Gotham City watch itself is relatively unchanged from the previous Romain Jerome Batman-DNA watch other than the dial. The 46mm-wide case is PVD coated, with the angular lines defining the shape of the Batmobile-inspired bezel. One difference you’ll notice is that the case back reads “The Dark Knight Returns,” referring to the Frank Miller graphic novel of the same name in which a middle aged Batman battles with Superman, only to pretend to have a heart attack and fake his death. Perhaps the demographic of buyers for this watch are Batman fans who are around that age range and have considered a similar ruse so they can have more time to pursue their hobbies rather than the mundane everyday. I mean, superhero stories are an escape no matter your age, right?

Or maybe they know that the hardcore fan who buys this Romain Jerome Batman-DNA Gotham City will associate the movie with the graphic novel, but it almost runs the risk of taking the buyer for granted by not acknowledging it. With all the Batman movies, stories, and comics it will be easy to confuse the specific collaboration here. 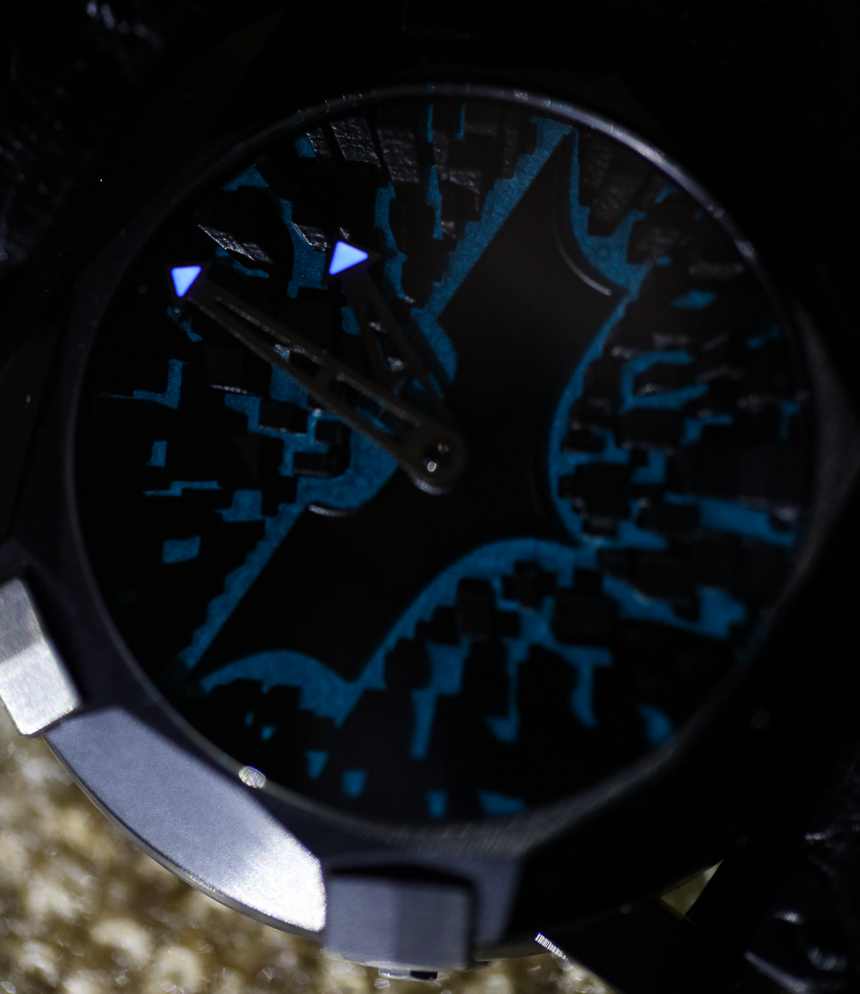 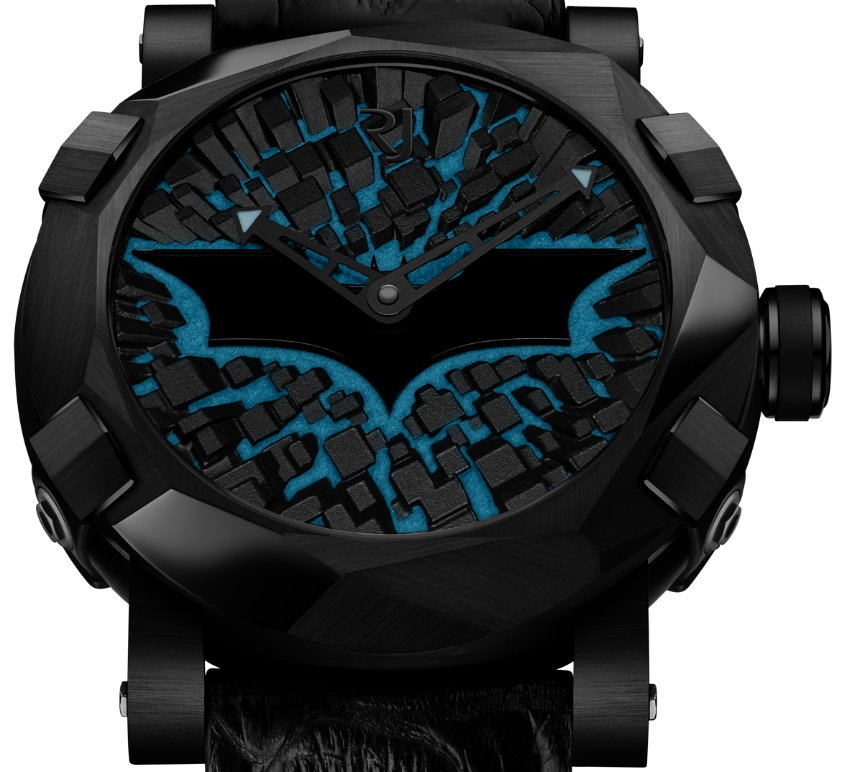 As previously mentioned, the engraved 3D map of Gotham City on the dial looks pretty nice but is nothing to write home about – see rendering and reality above. The dial is built with three layers, with the Batman and RJ logos in applique on the center and top of the dial, respectively. The space between the buildings is filled in with Superluminova C1 “blue emission” that is designed to evoke the feeling of a nighttime setting over Gotham City as you have Batman’s perspective while gazing down, right on your wrist. It’s a bit cooler in our imagination, but still pretty cool. 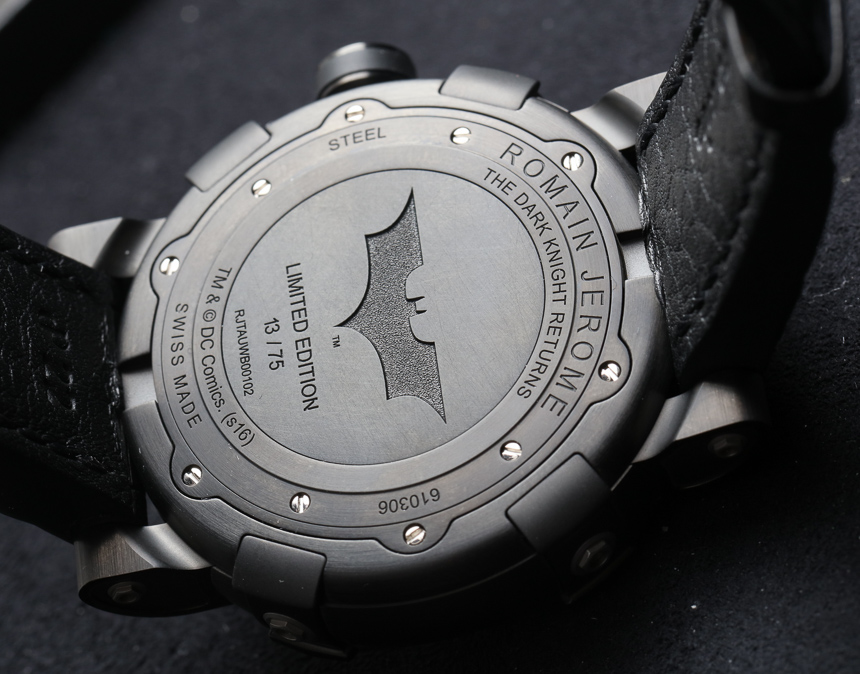 You’ll find the same movement that you do in many Romain Jerome pieces, the RJ001-A, which is a modified Concepto movement. It operates at 28,800 vph and has a power reserve of 42 hours. And, like the previous Batman-DNA watch, it comes on a black hornback crocodile strap that has a PVD-coated steel folding clasp. The watch has a water resistance of just 30 meters, and since it’s not an Aquaman watch, this “splash resistance” is passable in a watch for basic daily wear. 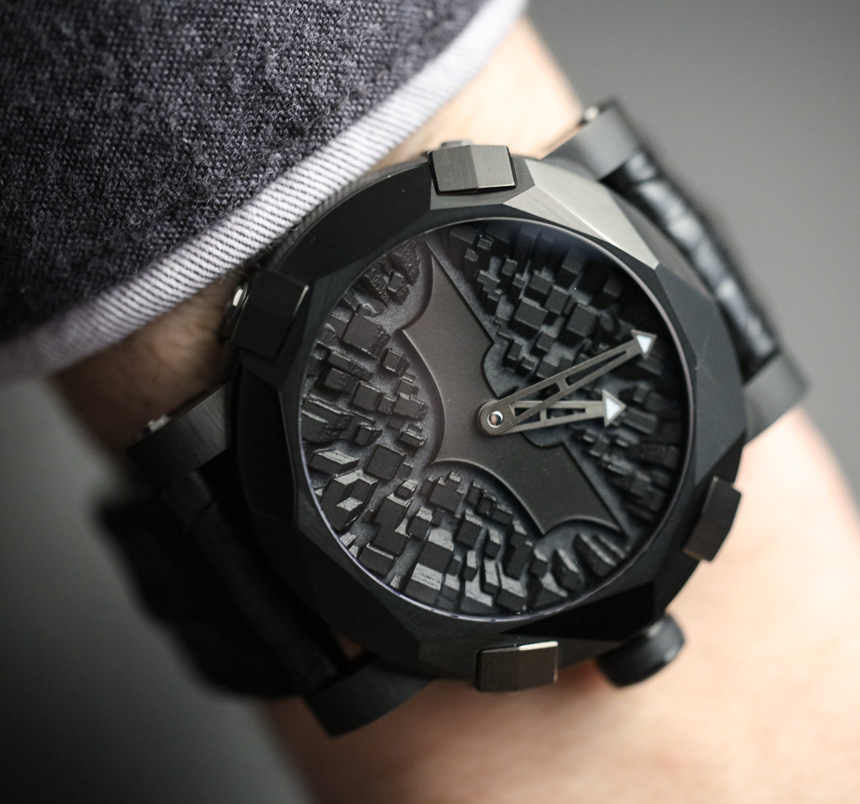 Obviously, people are going to have a lot to say about a watch with a price of $19,500 with a very cool dial and no other discernible features like movement or precious materials that would warrant that figure. On top of that, the brand is just cashing out on some novelty pieces while also creating some real avant-garde creative pieces. But really, it’s not surprising that there are 75 well-off Batman (or Super Mario Bros. or Tetris) fans that will pay the big bucks for a slice of limited edition nostalgia. There’s a good chance these buyers got into both Batman and watches when they were young, and a limited edition mechanical watch with an exquisitely made dial is a pretty neat way to be a fanboy in a relatively subtle and, really, tasteful way as far as comic book-inspired accessories go. To put it another way, it’s a piece of superhero memorabilia that’s likely to go unnoticed in a place like the boardroom of Wayne Enterprises. romainjerome.ch