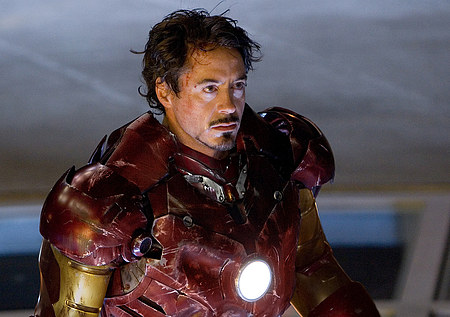 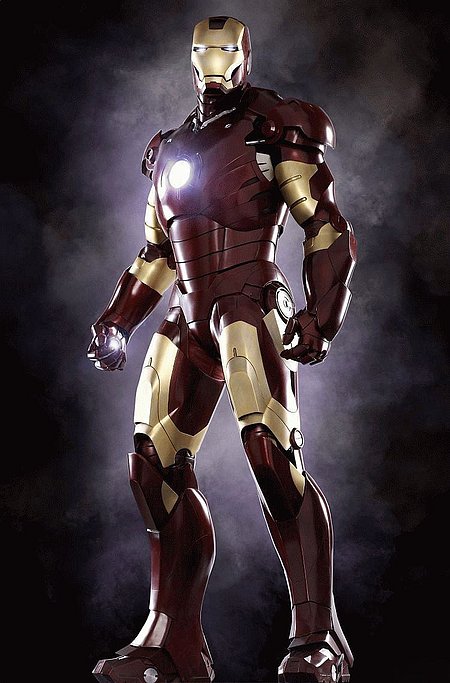 I love spotting watches in movies, and there were a few of interest in Iron Man, which I saw last night. To tell you right away, the watch that Tony Stark (Robert Downey Jr.’s character in Iron Man) wore that received the most screen time is very new, and I could not get an image of it to you show, though I will describe it. I was able to get pictures of all the watches, check them out below. The movie by the way was very well done. Perhaps not as much action as I would have liked, but Jon Favreau did a great job bringing a very different type of superhero to the big screen in a way that did not destroy the franchise. Notable elements are the attempt to make the process of building the Iron Man suit more realistic by displaying the development along with testing of the suit, and the ability of Tony Stark to publicly announce his role as Iron Man, in comparison to most heroes who keep such things secret. Another item of interest; Robert Downey Jr. wears his watches on his right wrist, while most wear it on the left wrist. This might mean that he is left handed, or has a particular preference for that wrist. You author (being left-handed), still wears his watches on his left wrist. The world does hate us lefties.

Oh, and for your car buffs, didn’t you like seeing the various Audi autos in the movie? Obviously another sponsorship, I am just happy that it didn’t come from GM. I would have died a little inside to see Tony Stark driving a Pontiac Solstice, or heaven forbid a Saturn Sky. Jon Favreau is NOT Michael Bay, and that is a wonderful thing. Tony Stark rides around in an Audi R8. A new silver Audi A5/S5 is shown a bit, and Iron Man saves a black Audi Q7 from being destroyed. 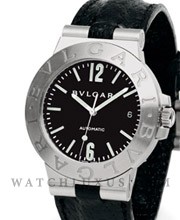 In the beginning of the movie, you can make out a Hublot Big Bang with a rich blue face, probably with the tantalum bezel and gold case. This watch is visible at Downey Jr. rolls around in the dust avoiding enemy fire. The Hublot Big Bang is a fitting watch for Tony Stark, as it represents high technology and luxury. The watch is immensely popular in the Hollywood circuit, but then again, most attractive luxury watches are. I imagine that Robert Downey Jr. probably has a collection of these in real life. Though he admits to wearing the Bvlgari watches in Iron Man because of the sponsorship.

After Tony Stark is kidnapped, his captors probably take the Big Bang and trade it for some more arms and armor. After his daring escape and return to Malibu, we see Tony Stark wearing a Bvlgari Diagono Sport with a black face and black leather band while in a tuxedo. The watch in the movie differs from the pictured version in that the movie watch has gold screws in the lugs holding the strap in place, which the pictured watch does not. Bvlgari obviously had some sponsorship in this movie, and the next watch Downey Jr. is seen wearing is a far fancier Bvlgari. 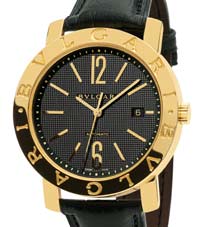 Sadly, this is the closest picture I could get of the gold Bvlgari watch that is worn in Tony Stark’s garage/workshop. The movie watch shares the gold case and “Bvlgari Bvlgari” names on the bezel, though it has a new chronograph feature which utilizes two retrograde indicators on the each side of the face. Traditional Bvlgari chronograph watches features typical round subdials for the chronograph registers. Use of retrograde registers is a stylistic approach that offers a more unique sense of functionality. Assuming I find images of the exact watch, I will place them in this post. Any heads up would be appreciated.

In accordance with the first watch worn in the movie (the Hublot Big Bang), Robert Downey Jr. was seen wearing an Orange numbered Bell & Ross BR 01-94 in an interview about the movie. This indicates that Mr. Downey Jr. is indeed a watch fan owning several tech luxury watches. These are perhaps not the most challenging of watches to acquire, but at least he is interested in owning them. Good for him.

Also of immense popularity among the Hollywood crowd are Panerai watches (mainly due to Sylvester Stallone), and IWC. Of course Omega and Rolex have their deeply ingrained popularity as well. But what I really like to see is when a star wears something totally out of the ordinary (I’m not talking about a Timex). I mean a nice and rare watch that signals the wearer put effort in to acquiring or learning about. Not merely something they walked into Westime (popular luxury watch store in Los Angeles) and picked out. Look out for more movie watch sightings. 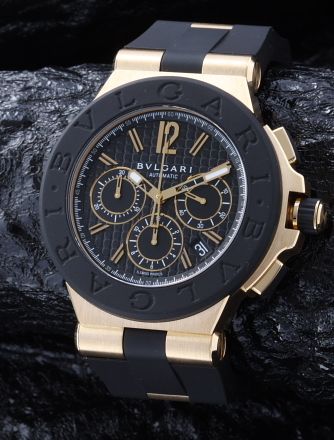 Many thanks to Jay and Gary who provided more images the watch Bvlgari watches worn in Iron Man. Apparently these watches were preproduction models only lightly announced at Basel World. Here are two more Bvlgari watches shown in the movie. Both watches are in the Bvlgari Diagono line. The funny thing is that the watch displayed in the movie as Robert Downey Jr. looks at the time is set to the customary “10:10” positions that orients the hands in a way most flattering to the watch face. An obvious promotional shot orchestrated by Bvlgari, but fun nonetheless.

First is the watch worn in the beginning of the movie. It was thought this was a Hublot Big Bang, and it sure looks like one, but apparently it was this Blvgari Big Bang clone watch, with similar hands, but smaller dimensions. The Big Bang is in my opinion a nicer watch, but the Bvlgari Diagono Chronograph is now slouch, through I do wish it relied on less rubber. The gold is well done on the case and face, with typical Bvlgari understated sportiness.

The second watch is also a Diagono, but this time with a full calendar, not the chronograph as mentioned before. The calendar does however feature retrograde hands for the day of the week and date. Included is also an innovative retrograde moonphase indicator (that could possibly, but not likely be a power reserve indicator). This Bvlgari calendar excels at symmetry, but isn’t the most legible watch to come out of the house of Bvlgari. Regardless, it is a bold and stunning watch. I particularly like the integration of the brown leather strap into the unique Diagono lug design. 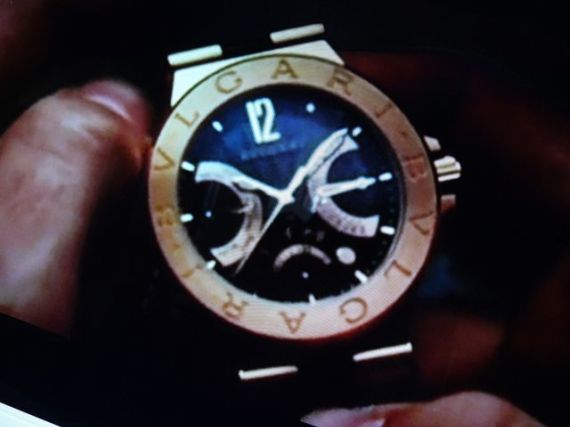 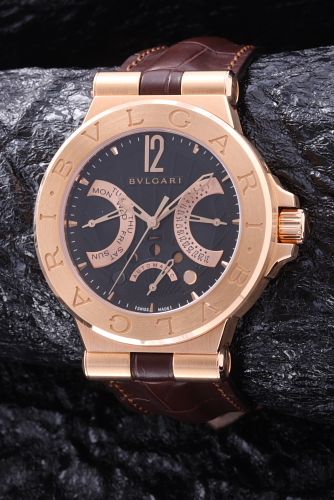 So now you have it, the full line of Bvlgari watches to make their screen debut in Iron Man.