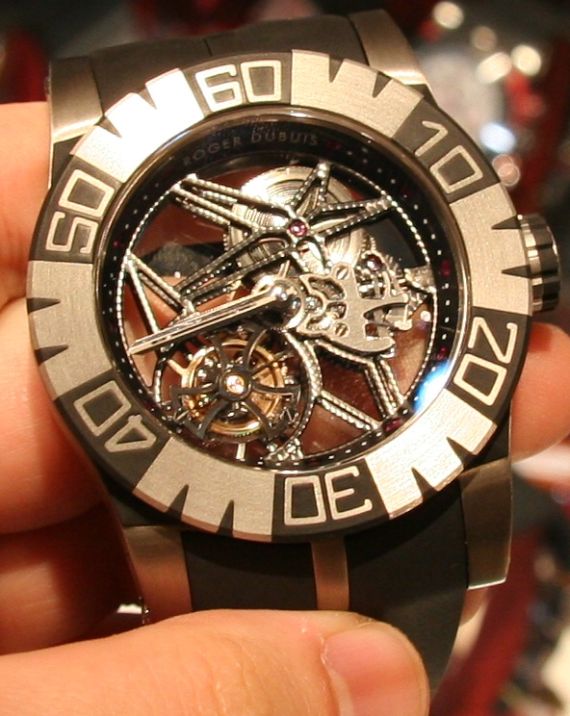 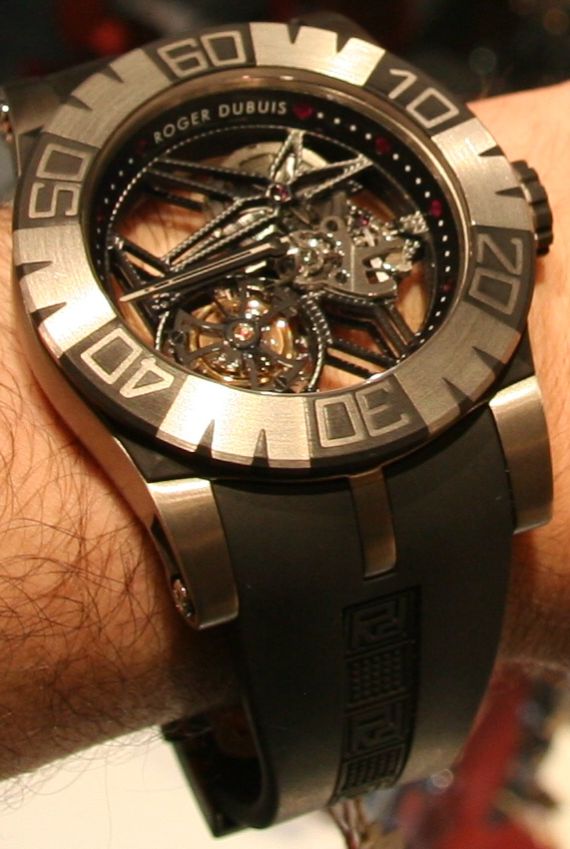 Last March I was very intrigued by the marketing images of this new Roger Dubuis Easy Diver SED Tourbillon watch with its intense level of skeletonization, in carbon fiber, that looked like tree branches. If you look closely, you can tell that the movement is barley even there. The biggest parts are the one minute flying tourbillon and the mainspring. Surprisingly, the manually wound Roger Dubuis caliber RD 02 SQ3 movement has a 60 hour power reserve (movement bears the Seal of Geneva). One thing that I want to make clear is that the “branches” of the movement are done in carbon fiber – which now makes it clear what you are looking at. I’ve never seen anything like this before. Like other models in the Easy Diver line, the watch has other carbon fiber sections built in, such as here seen on the sides of the lugs.

The Easy Diver SED Tourbillon is really large and really light. The 48mm wide case is in all titanium an feels light as a feather. Give then fact that the movement is barley there, this fact makes a lot of sense. In addition to the rubber strap with a titanium deployment, there is some rubber sandwiched into the construction of the case. Everything about the watch is very sporty, but also luxurious. Look closely at the slanted chapter ring around the dial – you’ll notice that the hour markers are rubies. Very cool in my opinion. There is a sly nature to Rober Dubuis watches that present luxury in an unapologetically pronounced manner, without the pretention that you might expect from a luxury watch company. 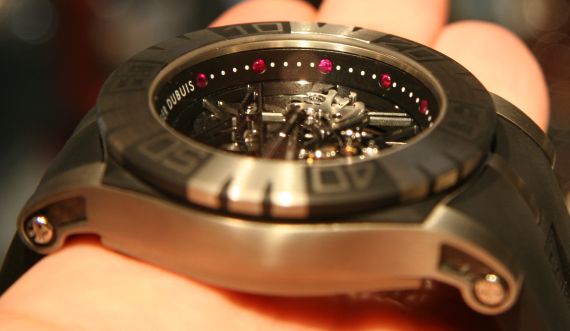 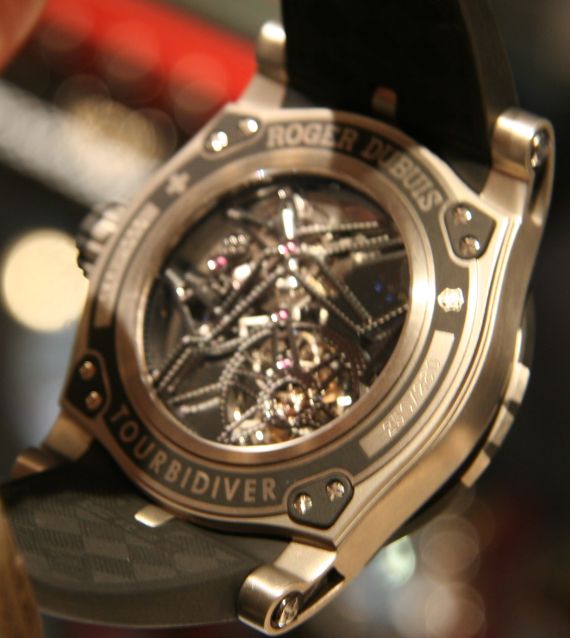 A lot of the design ethic of Roger Dubuis watches reminds me of Versace. Both literally and figuratively. See for example the pattern on the sides of the rubber strap and you know what I mean. Roger Dubuis is also humorous with their watches. There is something fun and at the same time sully about the watch. You need to relax and take the piece not so seriously, even though it does have a lot to be impressed with. It is important to appreciate the watch on various levels, technically, horologically, and artistically. You get a hint of this sentiment by the name that Roger Dubuis places on the rear of the watch, “Tourbidiver.” The very notion of a tourbillon in a diver’s watch is silly, so you need to appreciate it for the humor in the concept. Plus, the watch is a true diver’s watch with a rotating diver’s bezel, as well as 300 meters of water resistance.

This limited edition Roger Dubuis Easy Diver SED Tourbillon watch has less than 300 pieces out there. Retail price for the watch is about $125,000 – but retailers are making deals! I got to check out this cool Roger Dubuis as one of their authorized dealers here in CA, at Lussori in Carmel-By-The-Sea. A good example of a wild luxury watch from an interesting luxury watch brand.