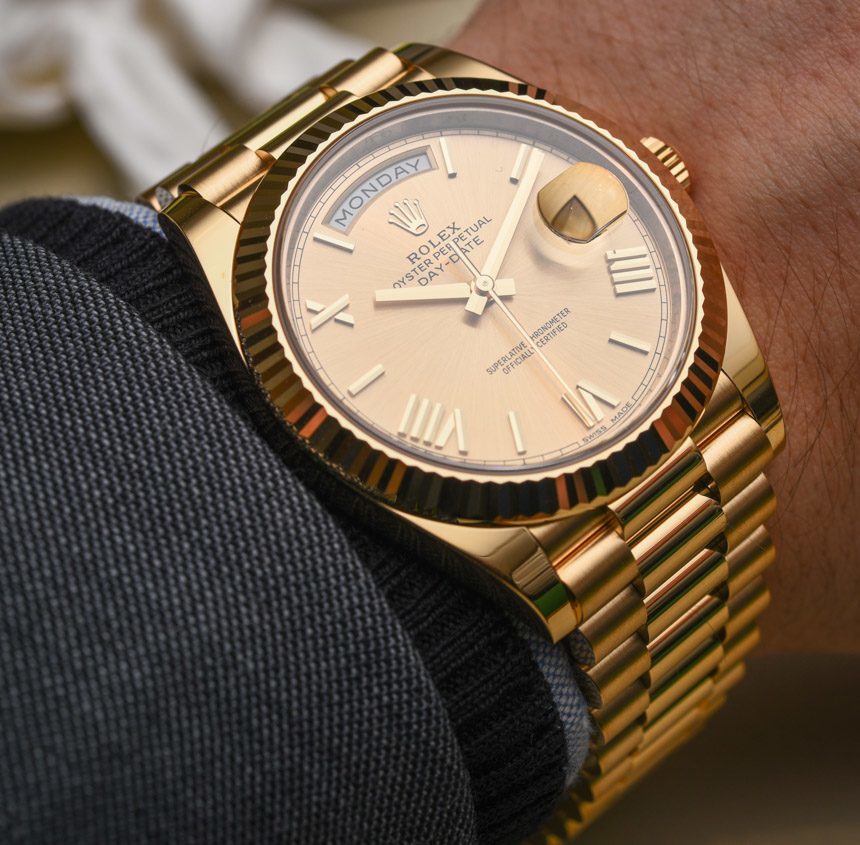 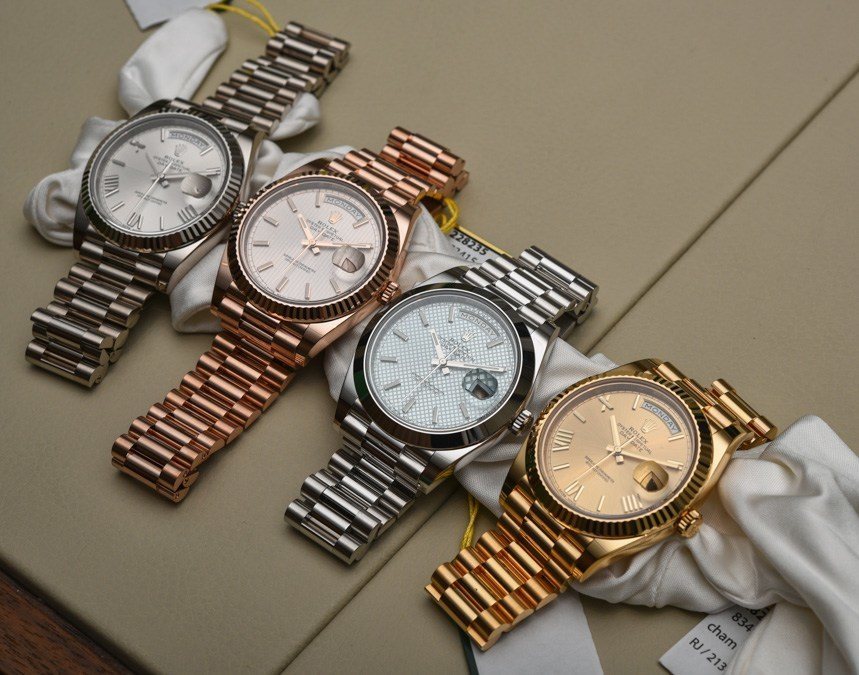 Earlier today we reported on the new Rolex Day-Date 40 watch release as soon as Rolex made the watch public, and now, we are following up with a hands-on with all versions of this new model. Having met Rolex today on the first day of Baselworld 2015 – which actually is a press day and not open to the public – not only could we see and photograph the new features on this latest release, but we also received detailed explanation about them. Let’s see, now, first-hand how the Rolex Day-Date 40 is new, and what it offers for those in the market for a dressier – albeit highly versatile – classic piece from the manufacture. 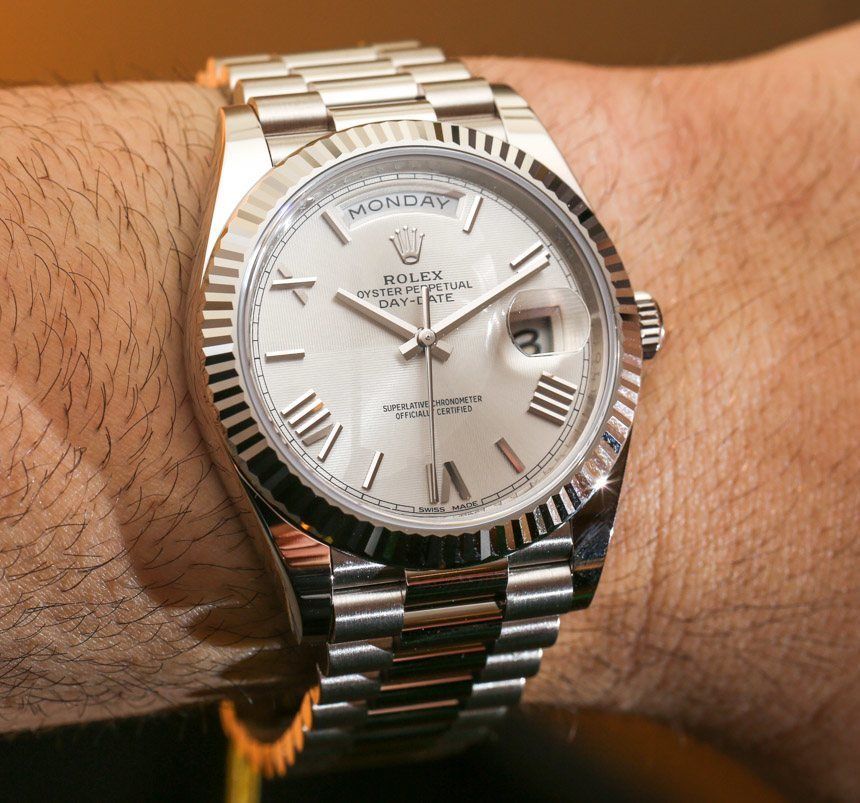 What wasn’t entirely clear at the time of the release but we now know for certain is that the Rolex Day-Date 40 does, in fact, replace the Rolex Day-Date II, tuning the “DD” down ever so slightly from 41 to 40 millimeters wide. Rolex actually refers to the Day-Date as its “most prestigious model,” and so it is no wonder the latest and arguably greatest Rolex movement is making its debut in this updated collection as well. First things first, we will discuss the new looks and then go on to discover further details of the new Rolex 3255 caliber. 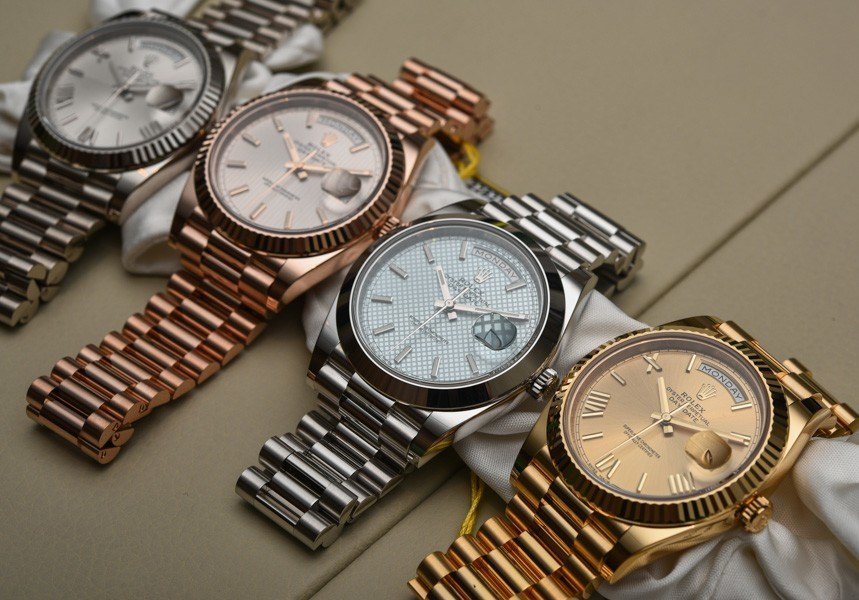 18k White gold, Everose gold, 950 platinum, and 18k yellow gold – those are the four new versions the Rolex Day-Date 40 is available in, and you can see them all above. There are, of course, several different versions depending on case material, dial pattern and indices, but we have seen all four metals – as the Rolex Day-Date 40 will exclusively be available in the aforementioned materials (no steel version) – so you can get a good idea of what to expect in terms of looks. 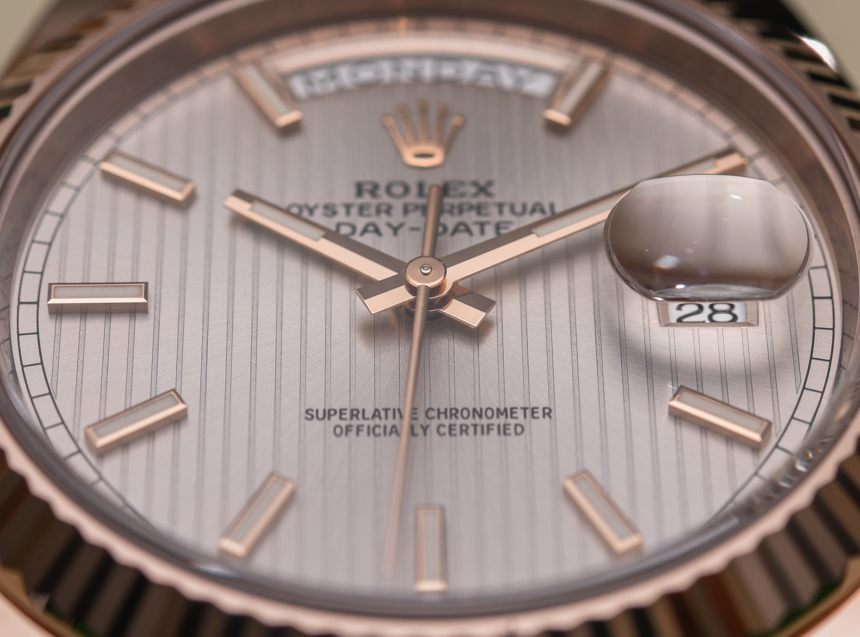 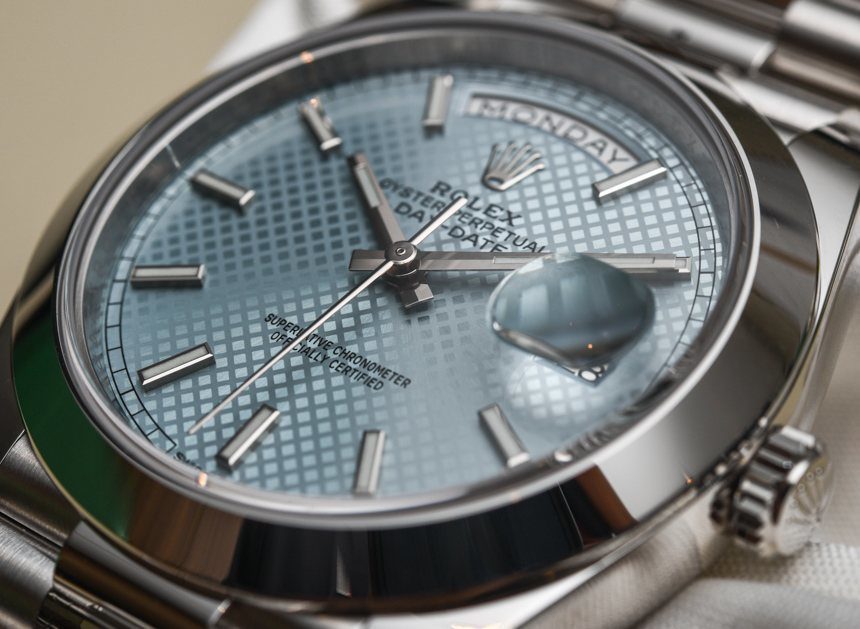 Rolex has debuted new dial options, where the patterns are created by laser etching a sunray finished dial, making for incredibly sharp and accurate lines – of different widths, depending on the model – running across the dials. The etching is subtle when it comes to depth; it is not like guilloché that results in deeper, more three-dimensional grooves on the dials. That is not at all to say the new Rolex dials lack depth, what you get instead is the mixture of the silvery, soft glow reflected by the fine sunray finishing, rendered more visually interesting by the laser etched lines which seem to stand out more or nearly completely disappear, depending on how the light falls on the dial. The overall experience is a dial that is beautiful to look at and is extremely versatile in its appearance – with the applied indices adding some extra volume and definition, also improving legibility. 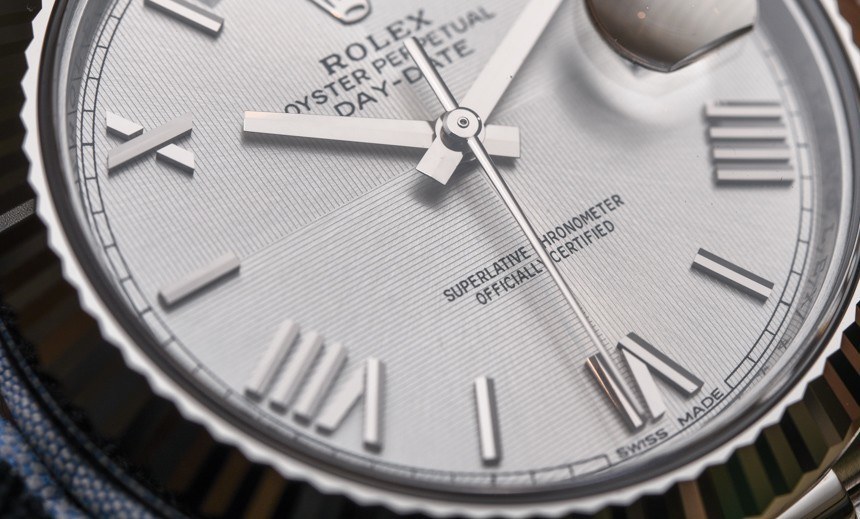 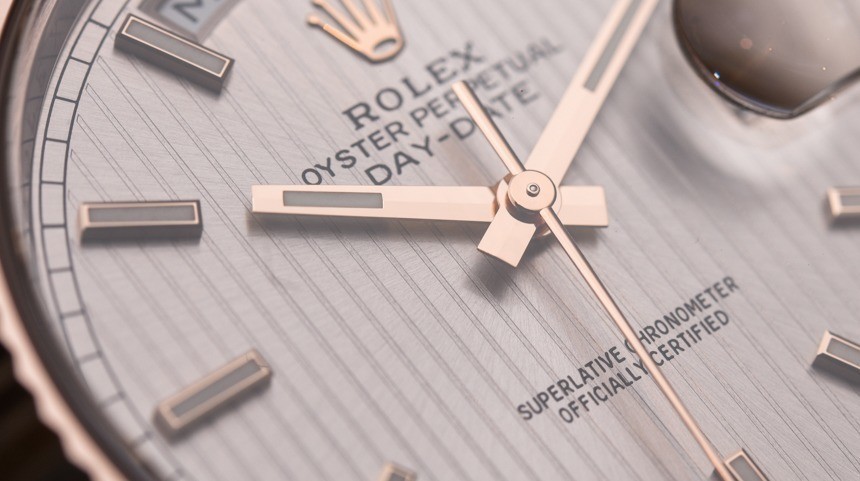 Speaking of indices, the options include the more traditional stick hour markers which are said to have improved lume – a welcome development despite the rather formal appearance of the Rolex Day-Date. On the other hand, you have the also hand-applied Roman numerals, each of which are made up of several faceted pieces of gold, resulting in a “deconstructed” look. Despite the historic flair of the Roman numerals, this design looks highly technical and perhaps a bit more masculine, particularly compared to the simple way how Roman numerals are usually constructed. 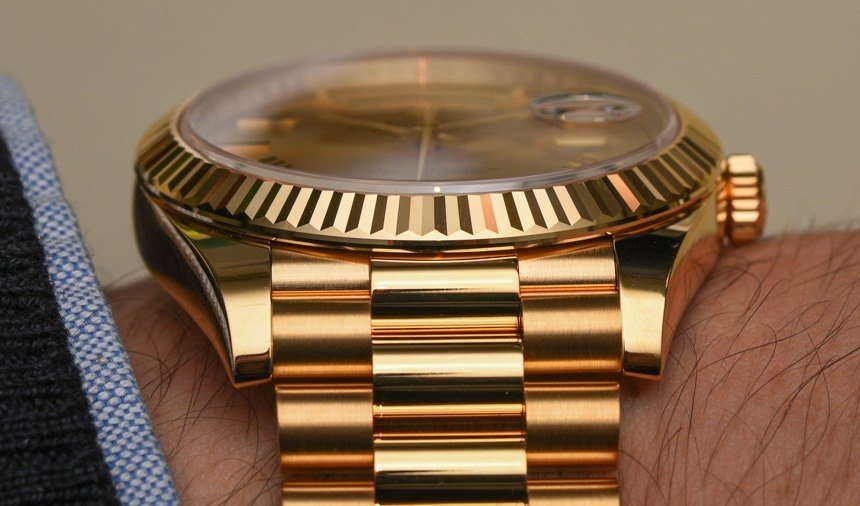 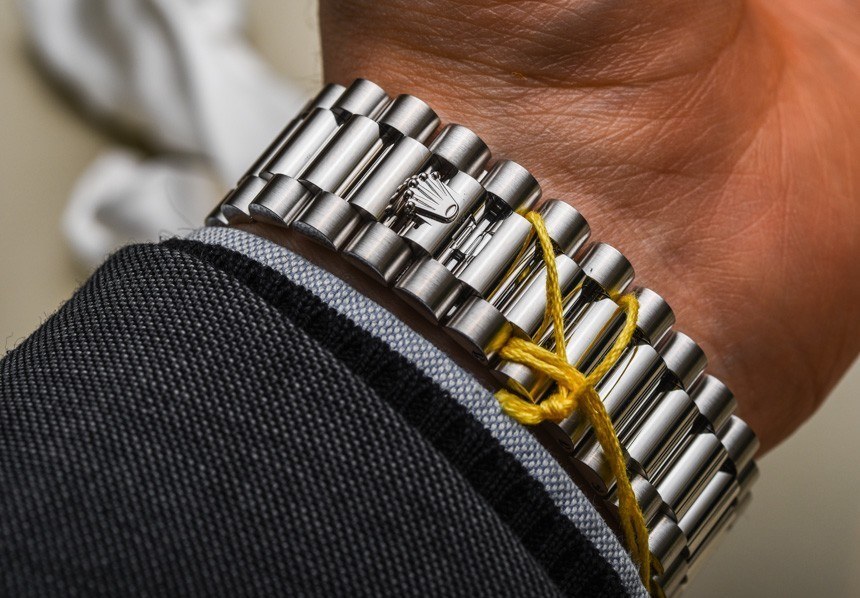 The new Rolex Day-Date 40 comes with an updated “President bracelet” design. The updates concern the integration of the bracelet to the case which has come to a point where it appears as though the bracelet and the case have been machined from the same block of metal. More importantly, Rolex now uses ceramic inserts to hold the links together, a notable development, as the use of ceramic will prevent the so-called “stretch” of the bracelet that can be seen on older Rolex bracelets which have been put through decades of wear. What might happen is that the metal inserts traditionally used get worn, making the links sit further apart from one another – because chances are that most of these watches will be worn for decades to come, and it is over time that the stretching of the bracelet becomes more noticeable, these ceramic inserts, Rolex says, will perform better at keeping the links of the bracelet as tight as they were when new. Furthermore, on the platinum bracelet, Rolex noted that the movement of the links could get somewhat limited because of the nature of the metal – but that is also said to be a thing of the past, thanks to the extremely hard surfaces of the ceramic inserts. 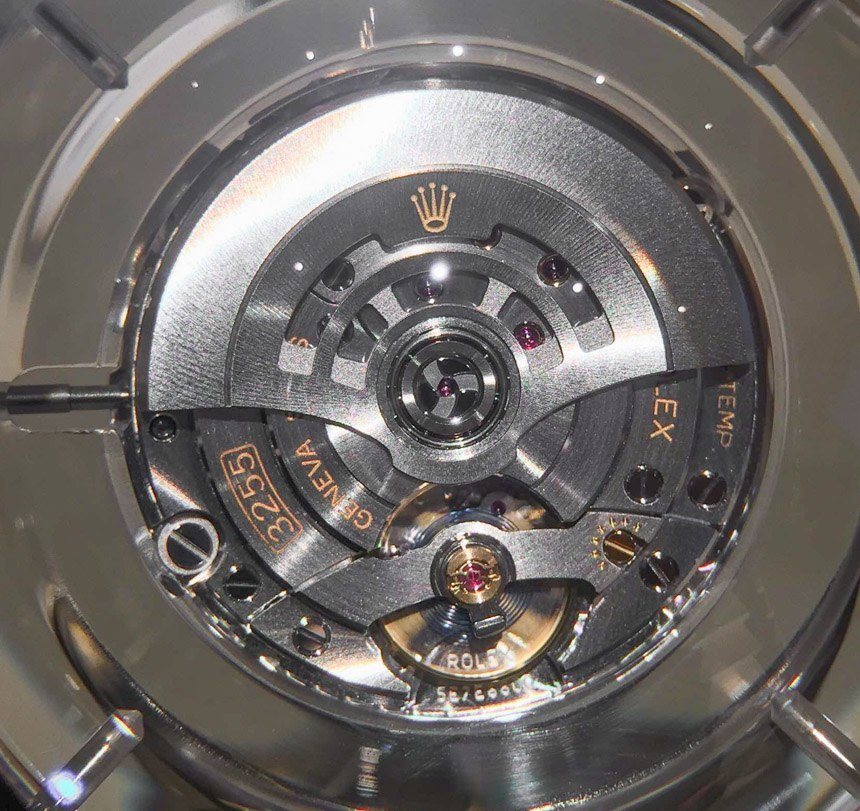 Inside the new Rolex Day-Date 40 is the also new Rolex 3255 caliber, and it goes without saying that it has been developed and is manufactured fully in-house. Altogether, the 3325 – designed almost completely from the ground up, as Rolex claims over 90 percent of the movement parts have been redesigned and optimized – boasts 14 Rolex patents and showcases several improvements over its predecessor, the Rolex 3156 caliber that was found in the Rolex Day-Date II.

Unquestionably, the most important – and perhaps also the most technically impressive – among these developments is the Superlative Chronometer accuracy, which now refers to the 3255’s remarkable -2 to +2 seconds per day accuracy. Rolex will still be sending all 3255 movements for official certification at COSC, who tests the uncased movements for an accuracy of -4 / +6 seconds per day. Rolex receives the certified movements, cases them up, and then submits the fully assembled watches to its own in-house tests which will guarantee that the Rolex Day-Date 40 (and probably other models down the line) are accurate within the aforementioned rate of -2 / +2 seconds per day. 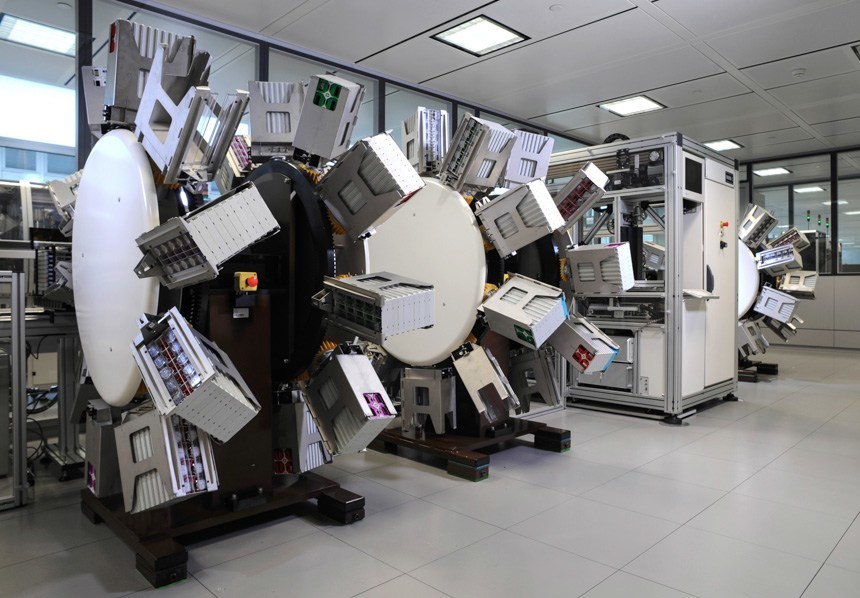 The testing is done by Rolex’s specially programmed high-technology equipment and an exclusive methodology that simulates the conditions in which a watch is actually worn. That likely includes the simulation of how the watch takes up countless different positions when worn on the wrist every day, how it is subjected to sudden moves, and also probably of how the watches remain stationary for 8-10 hours each day, when they are not worn. 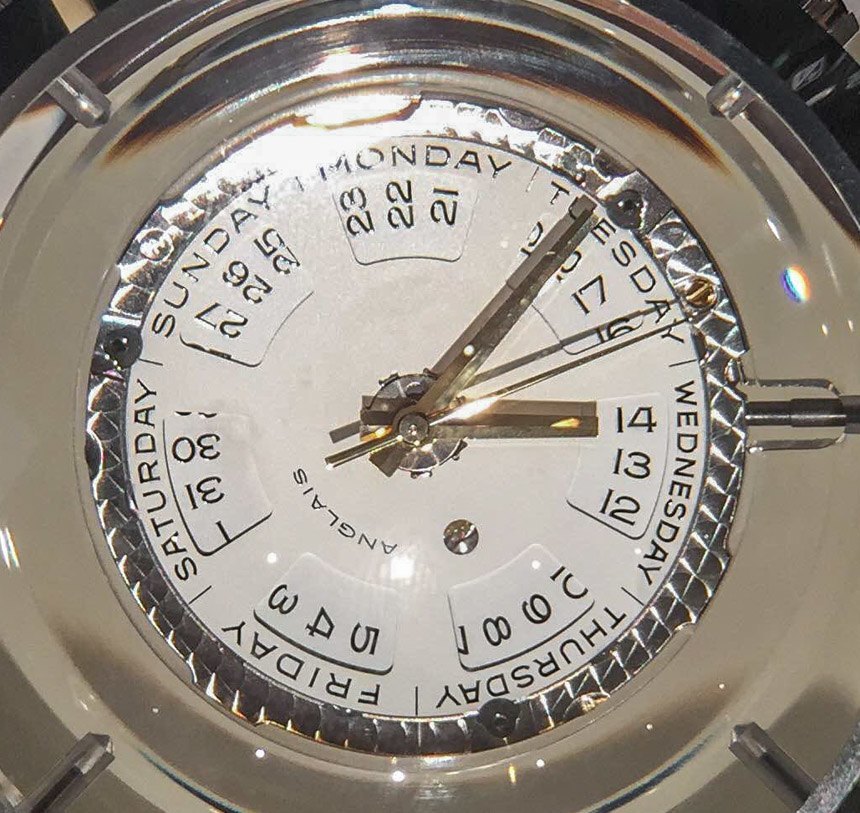 Most all developments made to the 3255, we learned, were refinements both when it came to movement architecture as well as materials used – and these refinements did go a long way. The 3255 now has 70 hours power reserve – about 50% more than its predecessor – mainly achieved by a new escapement design as well as a new mainspring barrel whose walls are half as thick as before, allowing for the fitting of a larger mainspring – this latter development alone provides about 10 extra hours of power reserve. 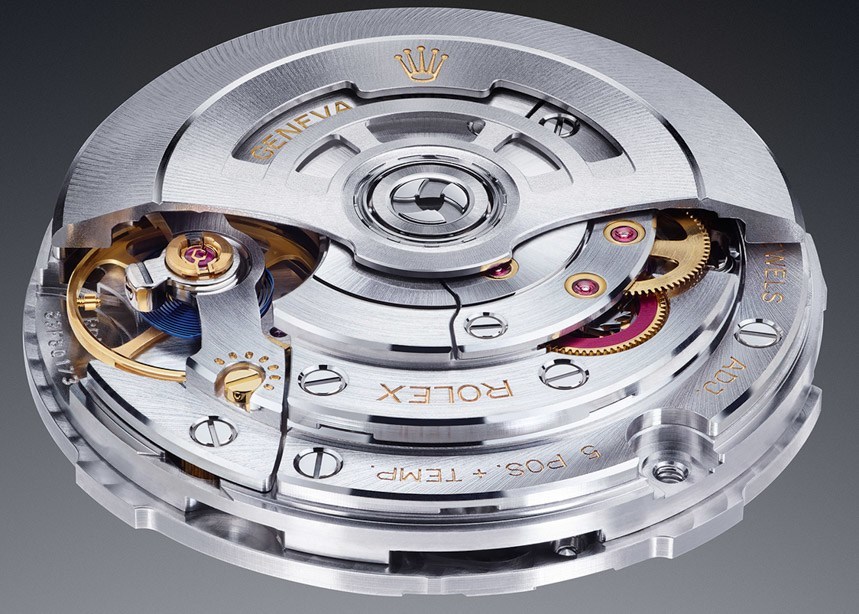 The other highly notable innovation is the “Chronergy” escapement, which is said to be much more efficient than its predecessor. The power reserve is extended by almost 50%, which, according to Rolex, is thanks to the efficiency of the escapement. Rolex has redesigned the geometry of the Swiss lever escapement – found in the absolute majority of modern mechanical timepieces – by re-engineering the size and shape of the escape wheel, the pallet fork, and the pallet jewels. 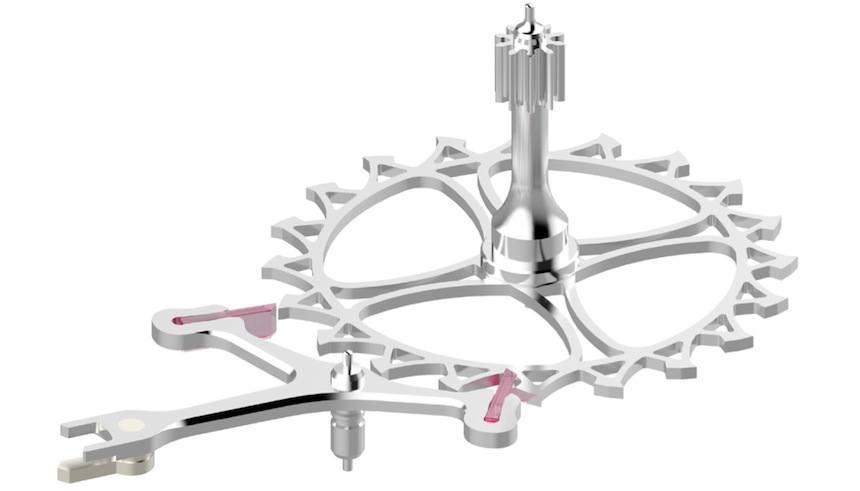 The new Rolex Chronergy escapement found in the Rolex 3255 movement

Specifically – for those watchnerds interested in these subtle details of Rolex’s latest and most advanced movement – the thickness of the pallet stones has been reduced by half, while the contact surfaces of the escape wheel teeth have been doubled. Also, the escapement system is no longer in alignment, but slightly offset, thus multiplying the lever effect; and last, the escape wheel has a cut-out design to make it lighter and reduce its inertia. All these seemingly minuscule changes account for the improved efficiency of an escapement design that has been around for over two centuries. 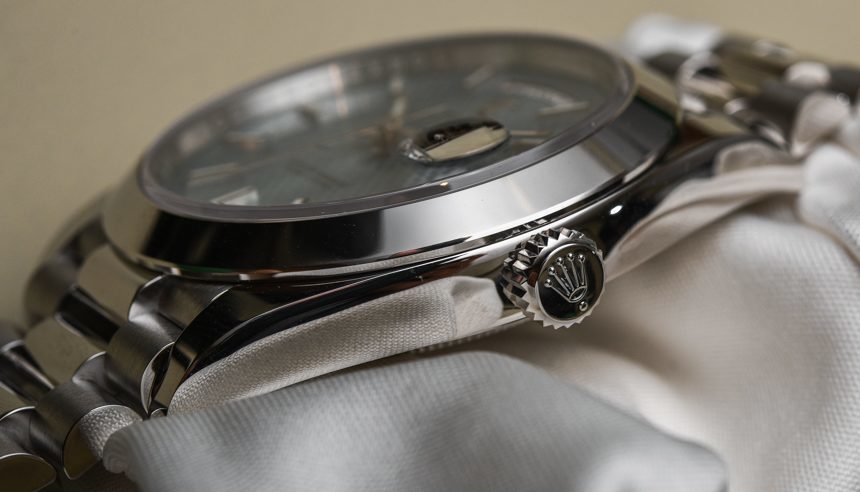 The new escapement is nickel-phosphorous, rendering it insensitive to magnetic interferences. We did inquire about more exact details and what we learned is that the 3255 movement – without a soft-iron casing to protect it – should still be resistant to magnetic fields of over 1,000 Gauss (and hence just about as antimagnetic as Rolex’s Milgauss). The balance wheel itself has also been updated; it still features a Parachrom hairspring (as opposed to using Rolex’s Syloxi silicon hairspring), manufactured by Rolex in an exclusive alloy of niobium and zirconium. Insensitive to magnetic fields, the Parachrom hairspring is said to offer great stability in the face of temperature variations and remain up to 10 times more precise than a traditional hairspring in case of shocks. 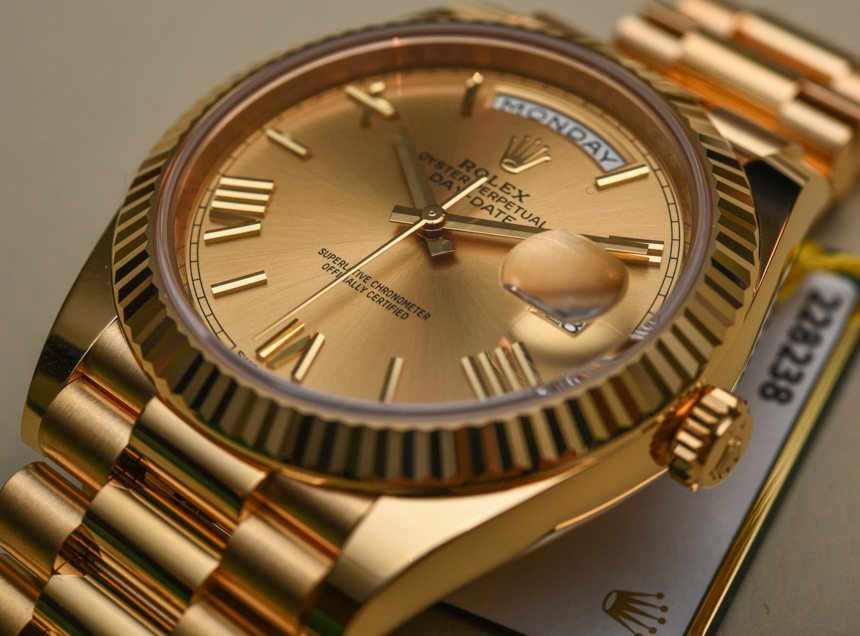 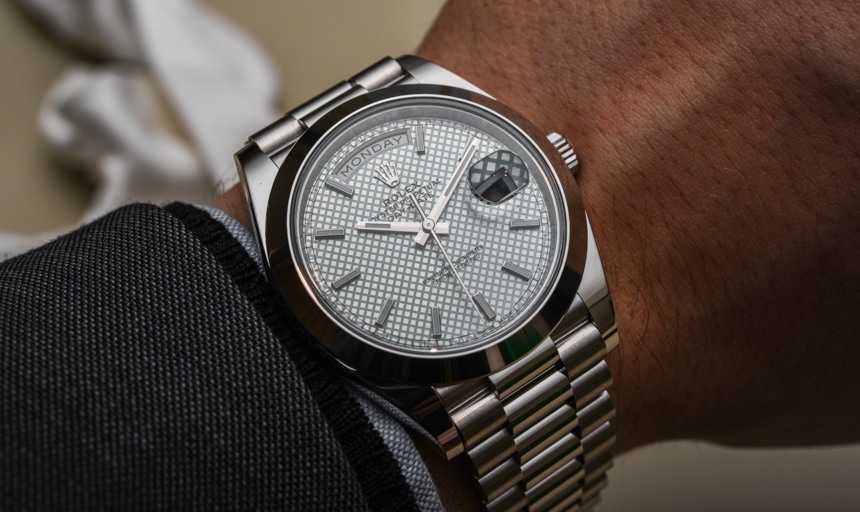 What renders the new Rolex Day-Date 40 watch particularly interesting is that at first sight, it may appear as though it were a minor update, bringing the Rolex Day-Date home by downsizing it by a marginal 1 millimeter in diameter. And yet, it actually accumulated a large number of subtle developments, all performed in an effort to further refine the overall wearing experience. That includes a new movement with hugely impressive, tested accuracy of -2 / +2 seconds per day, an improved bracelet design, as well as new, visually interesting – and of course very high-quality – dials and indices. The Rolex Day-Date 40, as a complete package, is interesting and its beauty is not just skin deep. Given that it is exclusively available in precious metals, I am curious to see when and how these developments will find their way to Rolex’s sportier watches like the Submariner or the GMT-Master II.