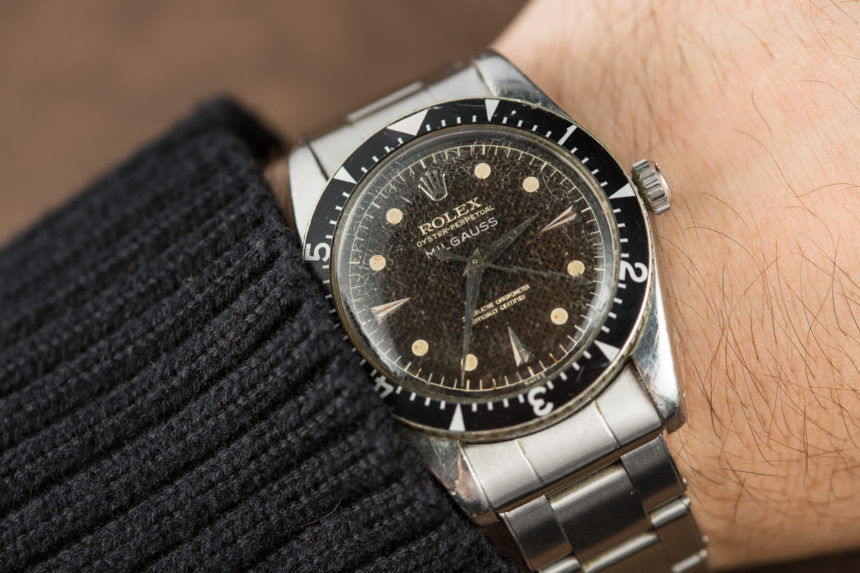 Bob’s Watches receives numerous pre-owned Rolex watches, many of which come with powerful stories. In this series, owner of Bob’s Watches Paul Altieri will share real stories about real Rolex watches and discuss what makes both the watches and their very personal histories so unique and appealing.

Many vintage Rolexes that are considered extremely rare and valuable today were initially quite unpopular when they were first released. One particular Rolex Milgauss was so unwanted by its owner, that it was actually returned to the store from which it was purchased; today, that watch is worth a quarter of a million dollars. Here is its story.

As electricity became a standard presence in work environments during the 1950s, some individuals – particularly scientists and medical technicians – found that the electromagnetic fields from their equipment wreaked havoc on their wristwatches. First released in 1958, the reference 6541 Milgauss was Rolex’s answer to the public’s growing need for an antimagnetic watch. 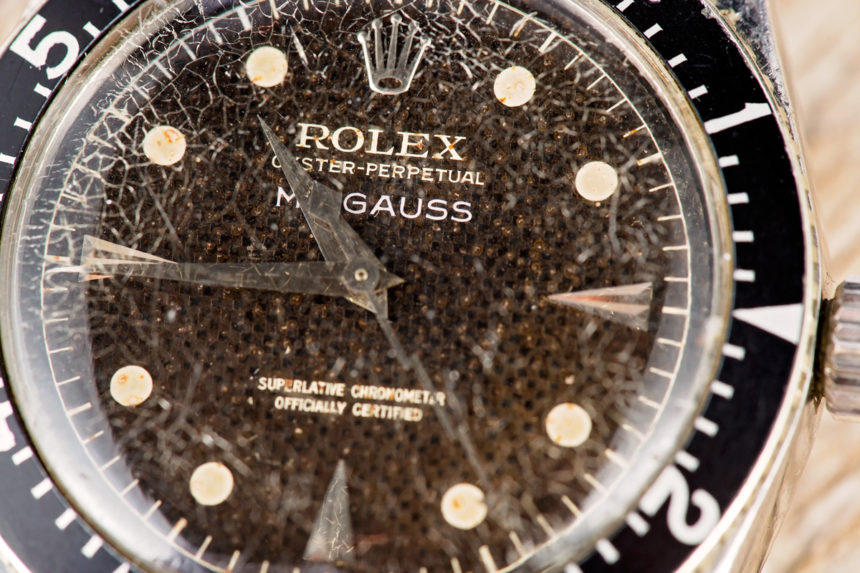 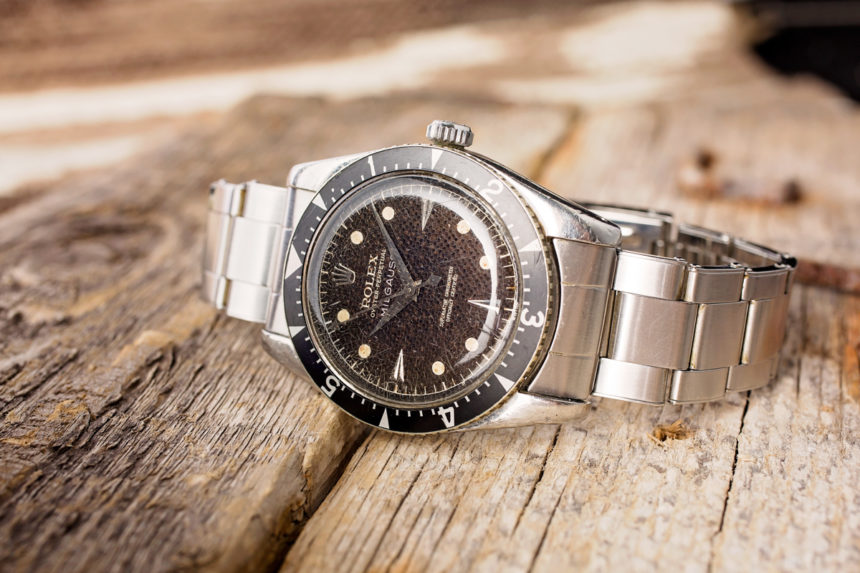 The name Milgauss was created by combining two words: mille (Latin for a thousand) and gauss, the unit of measurement for magnetic fields. The name was intended to be an ever-present reminder that the watch was designed to withstand electromagnetic forces up to 1,000 gauss. Rolex was able to achieve this feat by encasing the watch’s movement in a Faraday cage, which thoroughly protected its delicate workings from harmful magnetic forces. The Faraday cage (first invented by Michael Faraday in 1836) works by redistributing electromagnetic charges through the cage’s conducting material in order to neutralize the effects present inside the cage. 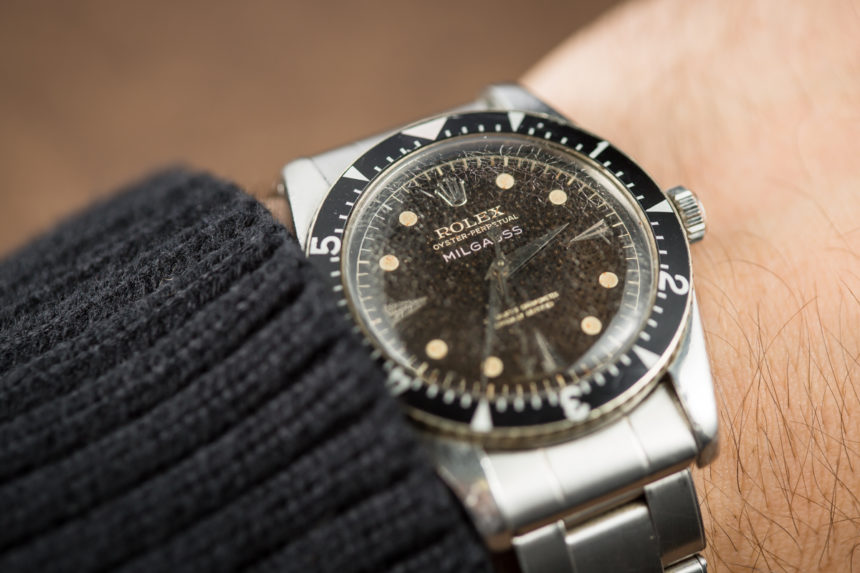 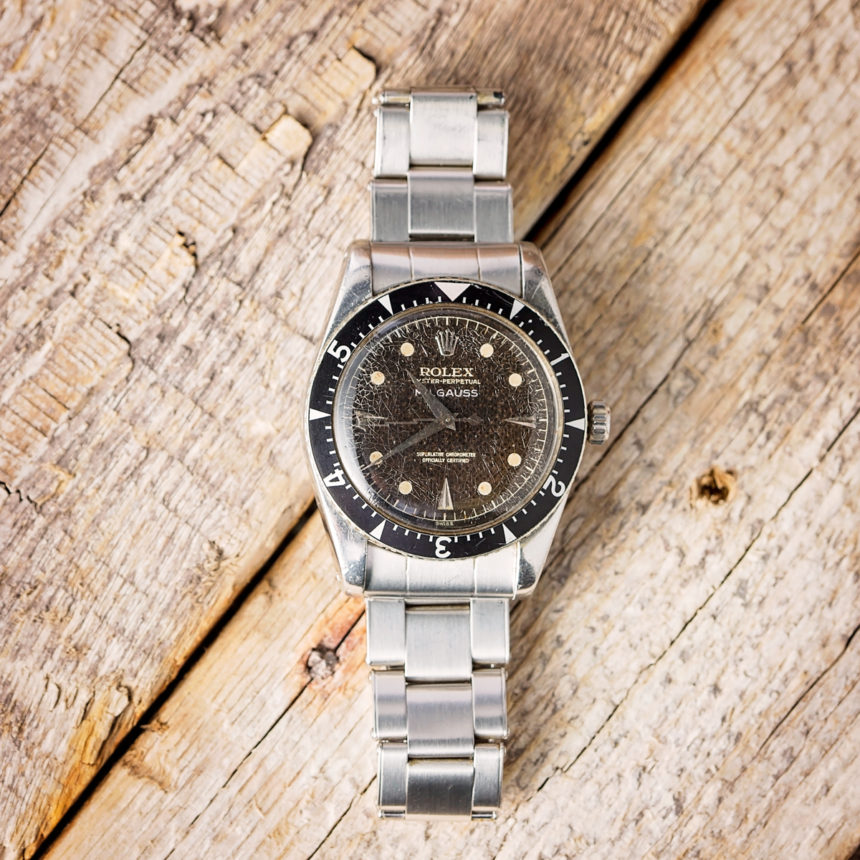 In appearance, the reference 6541 somewhat resembles an early Submariner, rather than a present-day Rolex Milgauss. The 25-jewel, self-winding movement – tucked safely away inside its antimagnetic, Faraday cage – was set in a stainless steel case with a black, rotating bezel that could be used as a rudimentary timer. As a final reminder of its electromagnetic resilience, the Rolex Milgauss was fitted with a unique, lightning bolt-shaped seconds hand.

An additional notable feature of the reference 6541 Rolex Milgauss is its “honeycomb” dial. While many collectors value this dial for its unique aesthetic flair, it actually helped increase the watch’s electromagnetic resistance. The dial is constructed of two crossed layers of metal that add visual depth to the dial, while also creating an excellent shield against magnetic forces acting on the face. 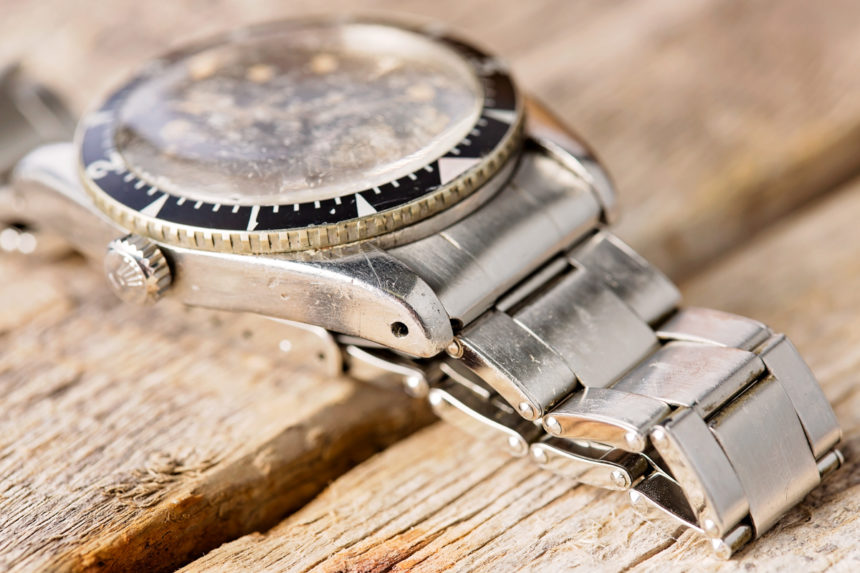 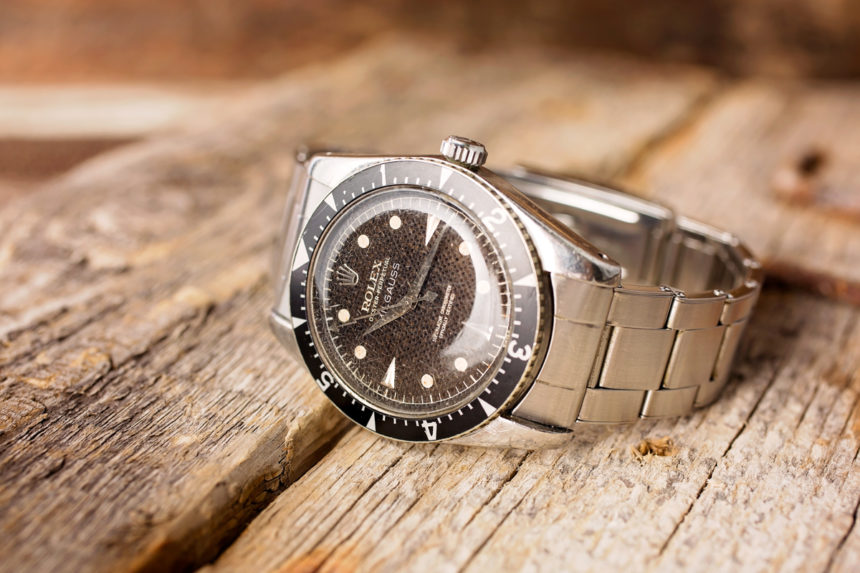 Despite being impressive from a technological standpoint, the watch itself was rather poorly received in the years following its release. Many considered the watch too large, and some took issue with its bold styling. Additionally, just four years prior to the release of the Milgauss, Rolex introduced both the Submariner and GMT-Master lines of watches, which further hindered potential Rolex Milgauss sales.

Despite several other options from Rolex, and a lukewarm reaction from the general public, there were some who were won over by the quirky design of the Rolex Milgauss. In 1958, NASCAR champion and race car driver Richard Petty purchased a brand-new reference 6541 Rolex Milgauss from Hayes Jewelers in Lexington, North Carolina. Richard Petty, nicknamed “The King,” is a seven-time NASCAR Championship winner. Statistically speaking, Petty is the most accomplished driver in the entire history of the sport, and in 2010, he was inducted into the inaugural class of the NASCAR Hall of Fame. 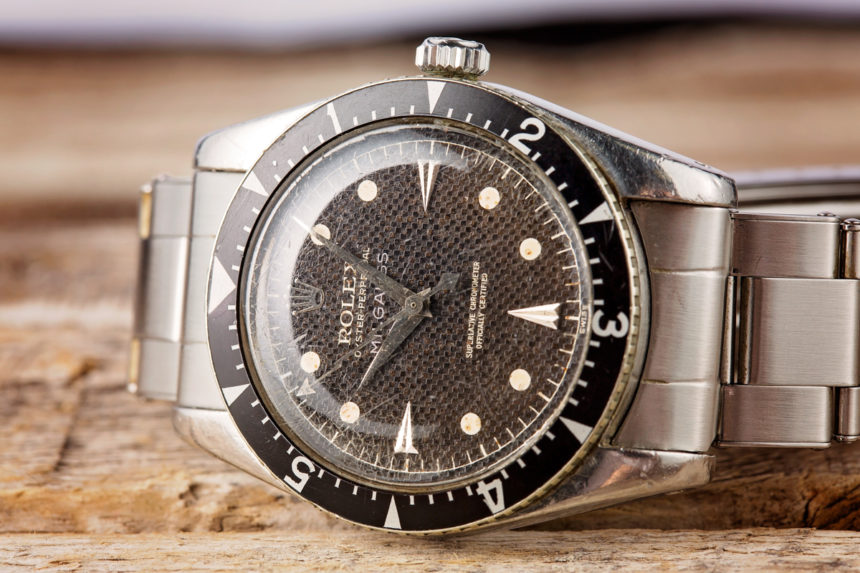 After wearing his reference 6541 Rolex Milgauss for nearly two years, Petty decided that a 37mm watch was simply too large for his tastes. The average size of men’s watches during the 1950s and 1960s was substantially smaller than it is today, and in 1960, Petty brought his reference 6541 Rolex Milgauss back to the same Hayes Jewelers from which he purchased it, and exchanged it for an entirely different watch.

Hayes later sold that very same Rolex Milgauss 6541 to a different customer, who took remarkably good care of the watch for all these years, until we recently purchased it. 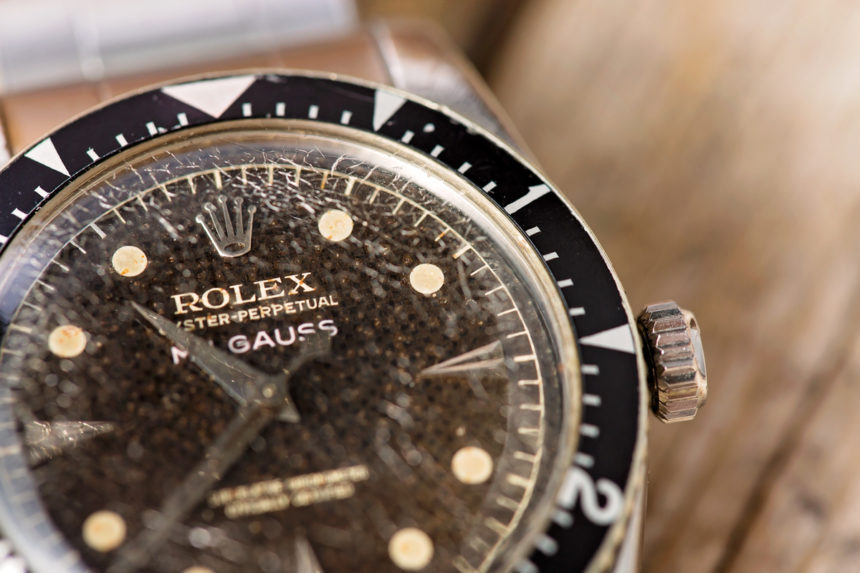 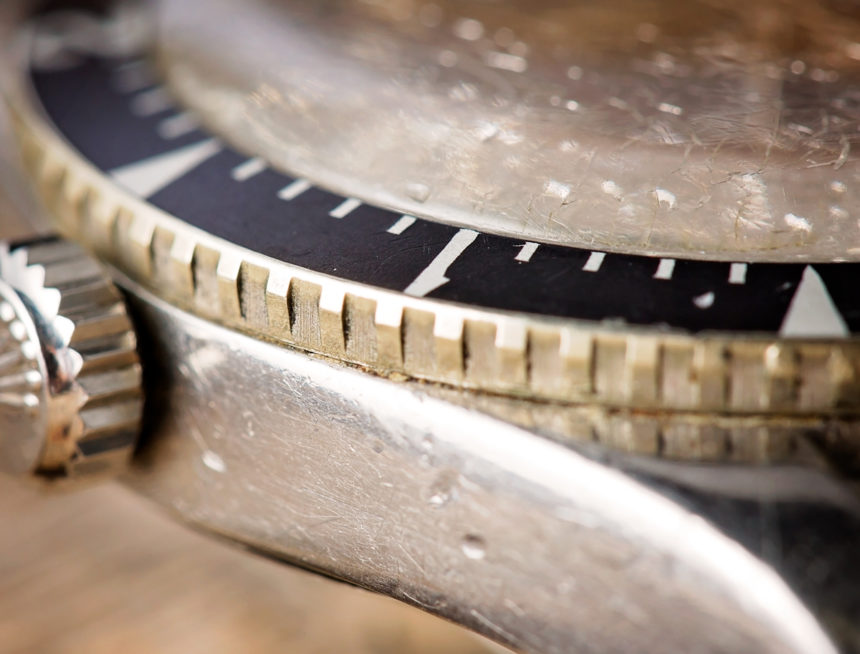 Given that the watch is well over half a century old, the piece itself is in fantastic, all-original condition. The case, lugs, bezel, and crown have nice, thick, sharp lines that have clearly not been over-polished during the years. The all-original dial is also very well-preserved, and the radium-based luminant on its hour markers has taken on a wonderful, orange-brown patina. 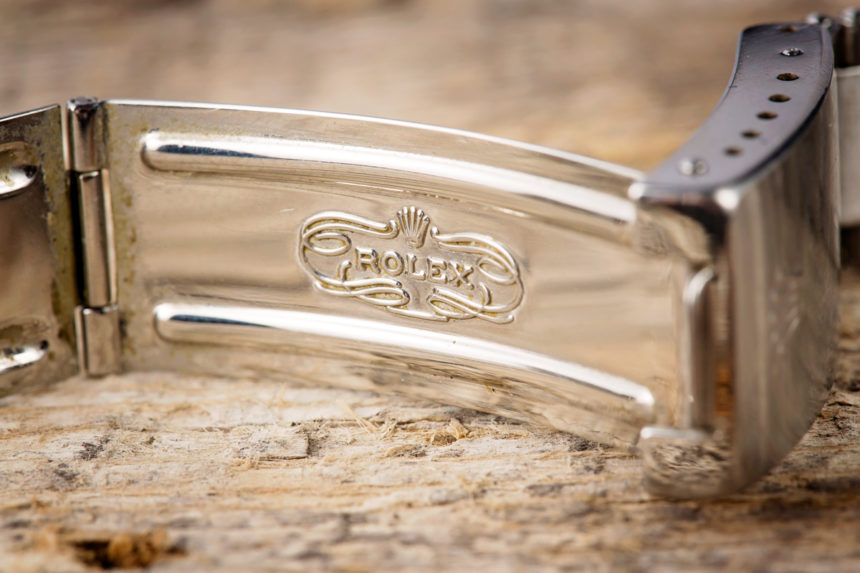 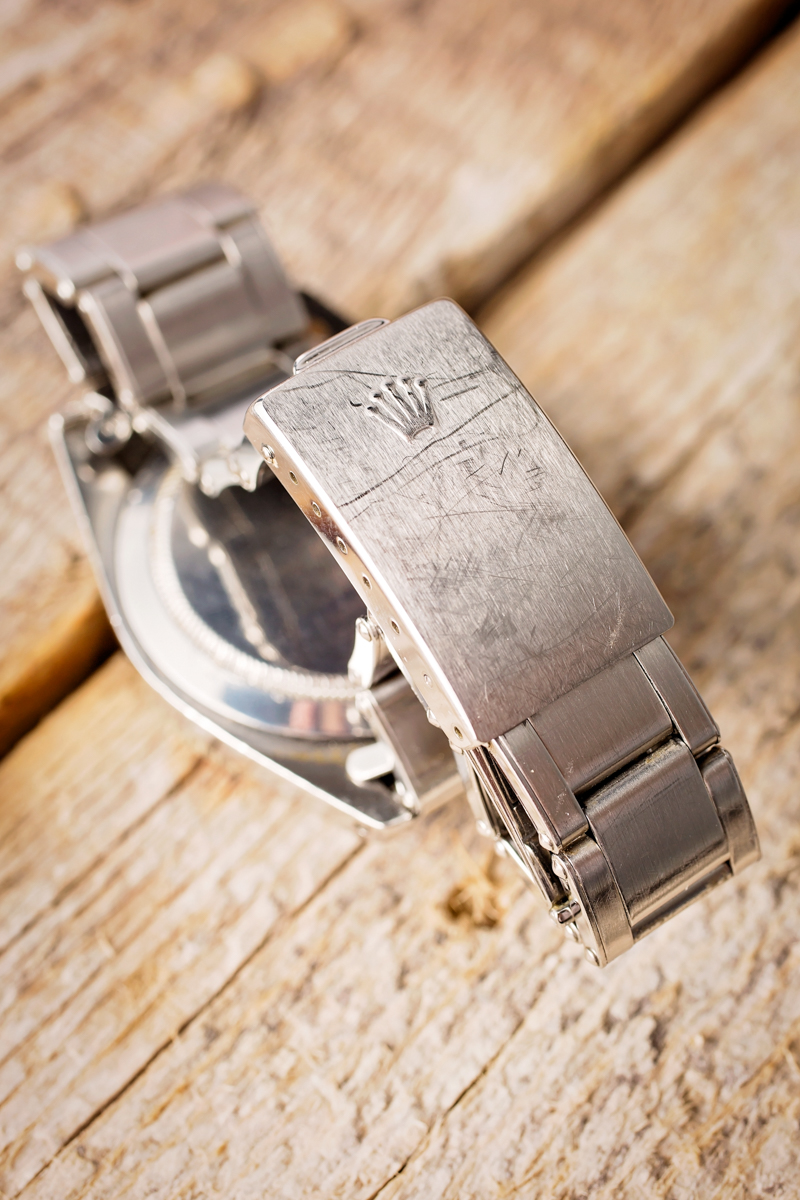 Even the folded-link, riveted, Oyster bracelet is in remarkable shape, with very little stretch in the pins or links. Many Rolex bracelets of this design and age have long since warped and stretched to the point where they are hardly intact, let alone usable. As far as original, riveted Rolex bracelets go, this is about as tight as they come.

A different reference 6541 Rolex Milgauss was recently listed for $180,000 at auction, and it lacked both the original, rotating bezel, as well as this watch’s well-documented history of previously belonging to one of the most famous NASCAR champions of all time.

By itself, the reference 6541 Rolex Milgauss is a very rare and valuable watch, and it brings with it an absolutely fantastic history – it is, after all, the first-ever Milgauss. However, the well-documented story of this particular reference 6541 Rolex Milgauss – along with the fame of its legendary, NASCAR-champion owner – have helped elevate this vintage timepiece to an entirely new level of value and collectibility. 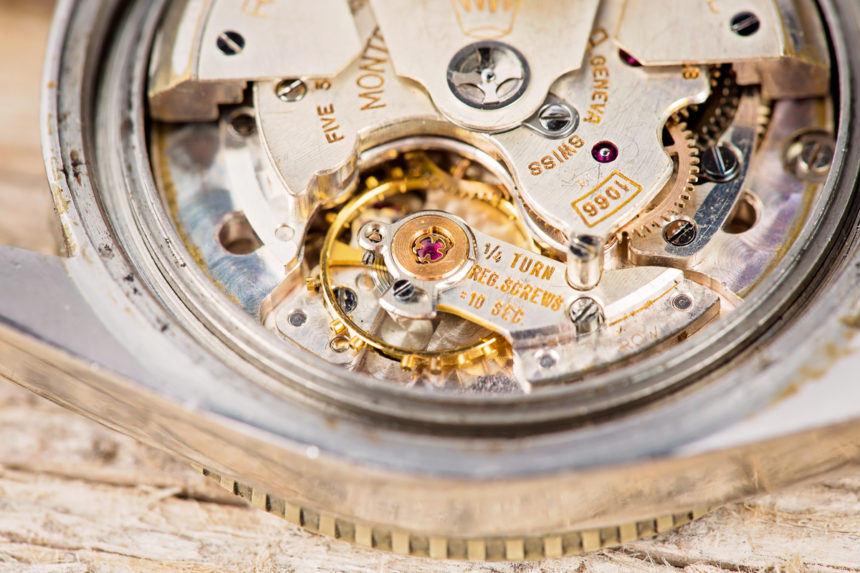 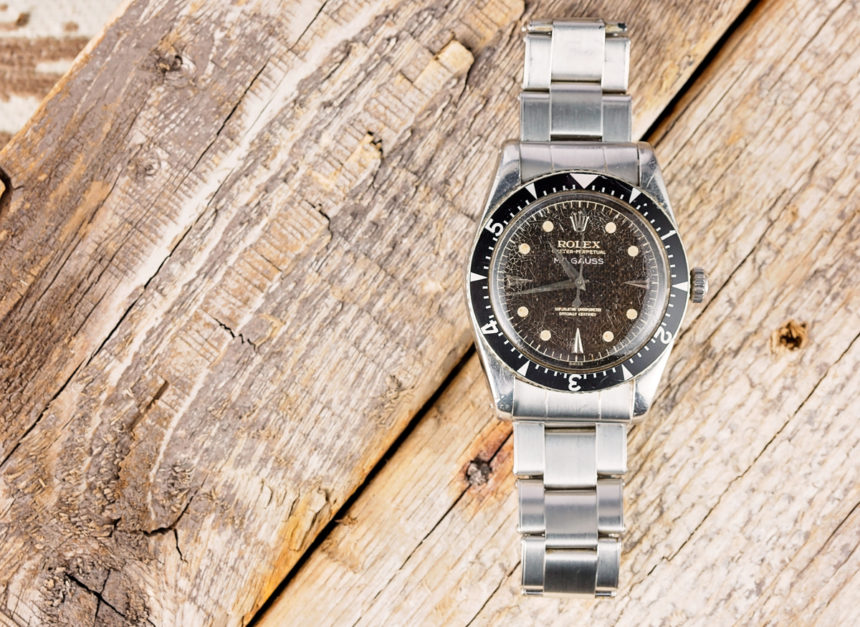 The unique histories behind watches are just part of the reason why some people choose to collect vintage Rolex rather than contemporary models. In the case of this particular reference 6541 Rolex Milgauss, its famous previous owner – and the unique and well-documented story have helped it achieve a valuation of roughly a quarter of a million dollars.

Paul Altieri is founder of Bob’s Watches, the leading online destination for used Rolex watches, where he created the Pre-owned Rolex Exchange Concept, which allows consumers to see both the buy and sell prices for a pre-owned watches, adding transparency to the market. Paul is also a watch collector and has many rare collectable watches in his collection.
Advertising Message