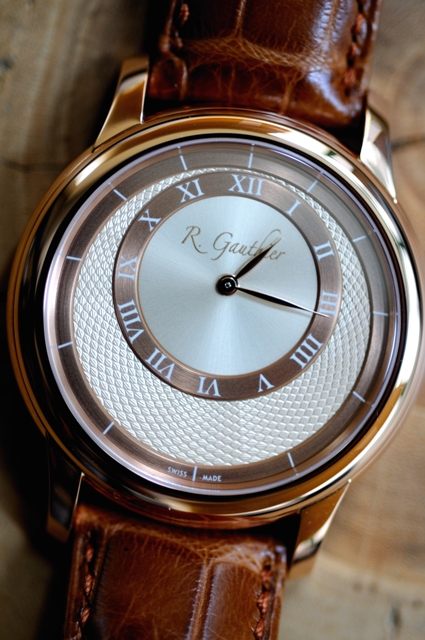 Yes, another new watch brand. And yes, they are pretty lovely. It really amazes me that so many new luxury watch companies seem to come out of the woodwork, each with their own unique flair and style. R. Gauthier watches are in a class of simple yet elegant watches that are nice without trying too hard. The first line being the R. Gauthier Prestige collection. Various colors and case materials from steel to gold are available . The off center dial leaves room for a more artistic take on watch dial design with emphasis on classic elements like Roman numerals and textured dials. It is actually a refreshing departure from the aggressively “futuristic” look of many new watches that claim to be such feats of mechanics when they really are not. The R. Gauthier is unpretentious and appreciated.

In the video, Romain Gauthier himself talks about his new brand – focusing on the design, the unique rear placed crown that can be wound while worn, the area where the watches are made, as well as inside the factory. The video is from TheTimeTv.com, who feature a lot of professionally done watch marketing pieces. They are a good view into the world behind the watch. I do have a comment for them though. Romain’s first language obviously isn’t English, and while his English is far better than my German or French, he is not completely able to express complex mechanical or design ideas in English. For that reason I think it would have been better to have Romain talk a bit in the video, but mostly have an English speaking narrator who can really convey these messages clearly, in the fashion that serious connoisseurs have come to expect. It is no disrespect to Mr. Gauthier at all, I simply think that the credibility of the story behind the watch is better expressed in a more professional sounding narration. Other than that, these videos offer at the least, a great glimpse into the watch making world.