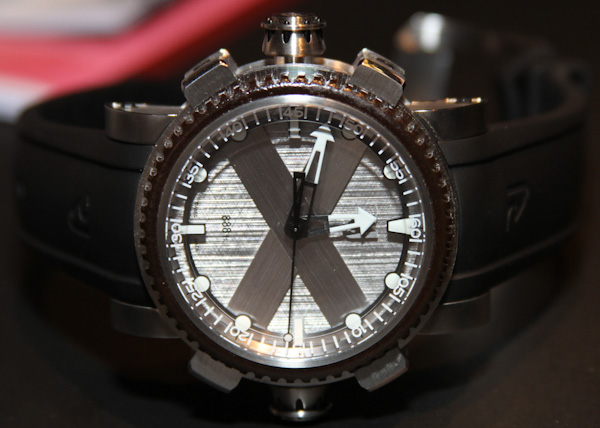 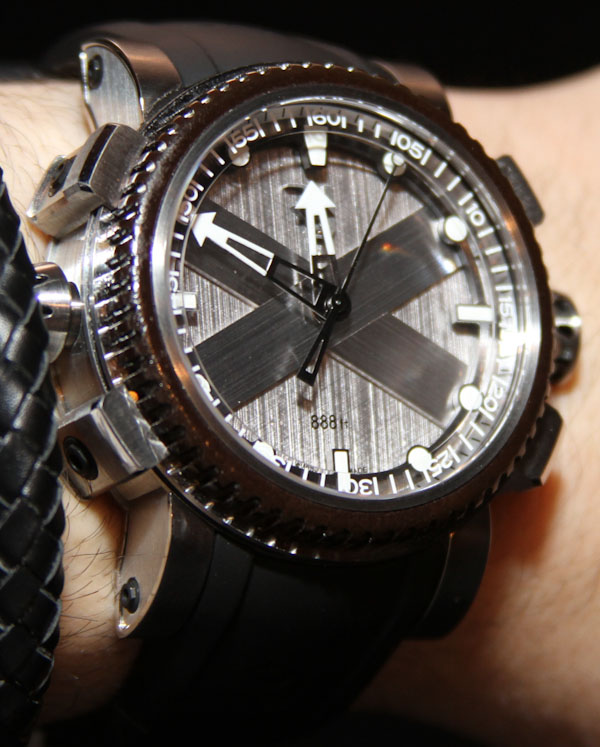 At the Baselworld 2011 watch show, Romain Jerome showed a new dive watch called the Octopus (here). It was to be part of the Titanic DNA collection, and the brand’s first true diver. It actually never came out that year. At the 2012 Baselworld show, Romain Jerome returned with another Octopus watch, the piece was finally going to come out, but with some changes from the original concept. What you see before you is (likely) to be the final Romain Jerome Octopus diver watch that will be available for sale.

So what happened with the original? Unfortunately, a rather cool and ambitious feature never made it through pressure testing. Romain Jerome dreamed up a good internal bezel that would be adjusted by turning the outer bezel. If you look at the dial there is an inner 60 minute ring printed on a transparent crystal. This was meant to be turned by using the outer bezel. I don’t think anyone had done anything like it before – and it was an exciting feature. Though for whatever reason, Romain Jerome was never able to have it work to satisfy the watch’s desired 888 feet (about 300 meters) of water resistance. 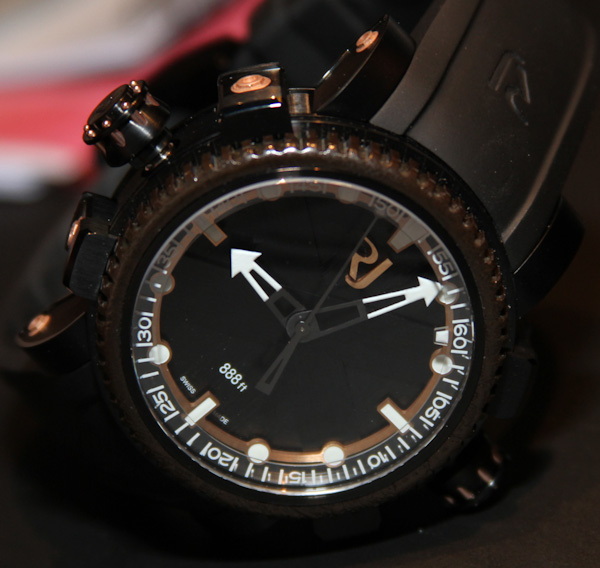 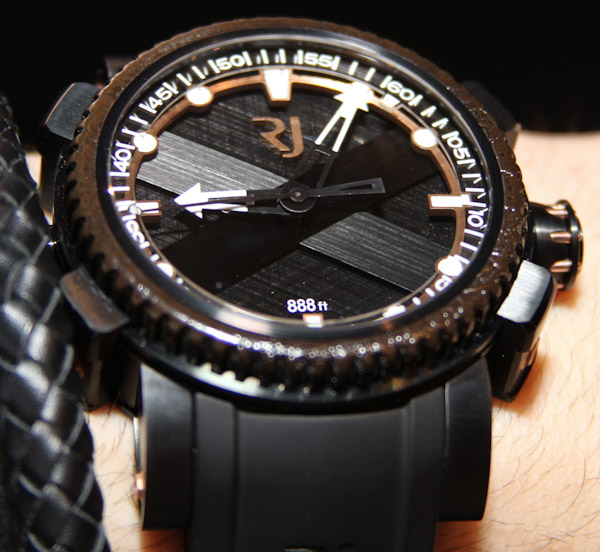 Not wanting to shelve the attractive project, Romain Jerome opted for a logical fix, to include a second crown on the left side of the case used to rotate the inner bezel – just as most watches with inner dive bezels do. I actually prefer this “3 – 9 o’clock” crown layout to those which have a “2 – 4 o’clock” double crown layout. Otherwise the Octopus looks similar to that from 2011. However, there are a lot of little changes it seems, and this is really a new watch. According to Romain Jerome CEO Manuel Emch, they really had to build a lot of the watch from the ground up again. The dial actually looks better on this newer model in my opinion, and the overall piece feels well composed and legible. As a dive watch it feels functional, but still has all the signature RJ character that fans of the brand look for.

I am not sure about the specific case size. The Octopus is quite thick and around 46m wide. The crowns are very complex and stick out even more. Each one has eight screws in it, and a detailed octopus engraving on it. Though the left crown might have a different engraving. As I discussed when debuting the first Octopus, this is a timepiece (like many Romain Jerome items) that likes to play with the number 8. You’ll see that theme throughout the watch, from the depth rating, pieces in the limited edition, and number of  arms on its namesake animal. 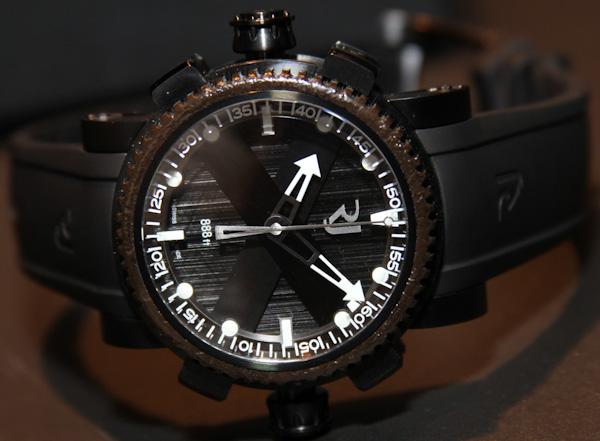 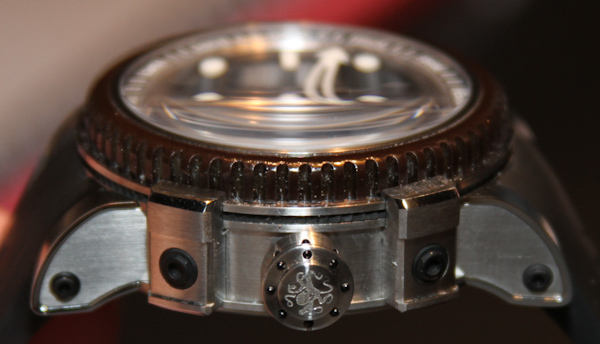 The case finishing and details are certainly upgraded from last year’s prototype. You don’t have to love the piece’s design, but it is hard to argue that there aren’t a lot of intricate details all over. I think that it is safe to suggest that the watch does fit within Romain Jerome’s actual and perceived steampunk aesthetic. Technically being part of the Titanic DNA collection, the oxidized metal bezel does contain some trace metal from the titanic. On the rear of the watch it does state “Made with parts of the Titanic.” On the rear of the watch you’ll also see that rather cool octopus engraving – and that octopus does not look happy. Another neat detail is the design on the inner part of the rubber strap which is meant to look like tentacle suction cups. Far from wanting to look like a serious diver, this is a high-end themed novelty watch with a twist of character. It is not a good idea to ask too many “why” questions when trying to understand the watch. Just take it for what it is. Inside the watch is a Swiss automatic movement – just not sure which one. Likely sourced from Concepto as is commonly the case with RJ. 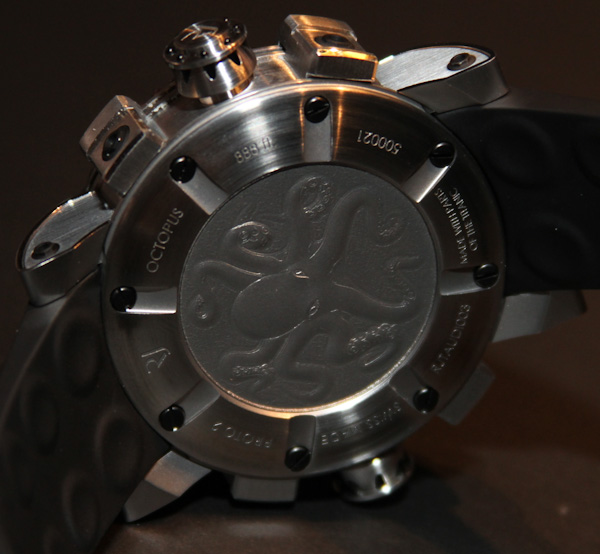 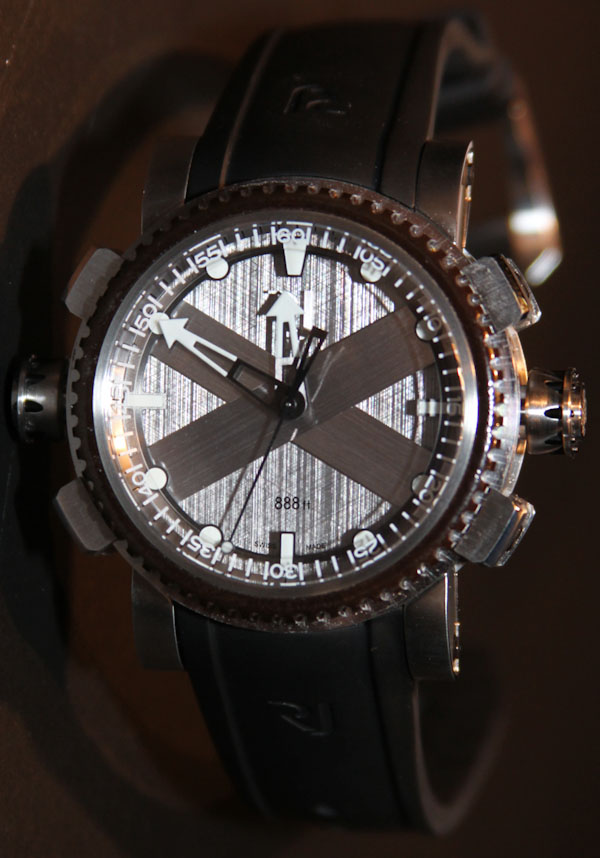 Romain Jerome will offer the Octopus in a few versions. Each will have a steel case, but there are PVD black versions as well as some with available 18k rose gold trim. How do you feel about the dial design? The large X which is on many RJ dials is there, and the dial is available in black or a silvered tone. I must say that the multi-level design of the dial along with the prominent hands and brushed textures are actually rather satisfying. It works pretty well and I could easily see myself wearing this watch. Each model looks to be limited to no more than 888 pieces. I am guessing the price will be about $10,000. PRICE UPDATE: CHF 12,950 or USD $13,750 for the Metal and Black Octopus watches, and CHF 13,950 or USD $14,900 for the Red Octopus watch.