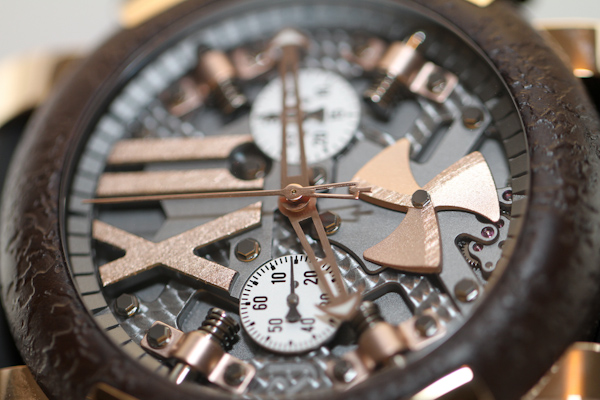 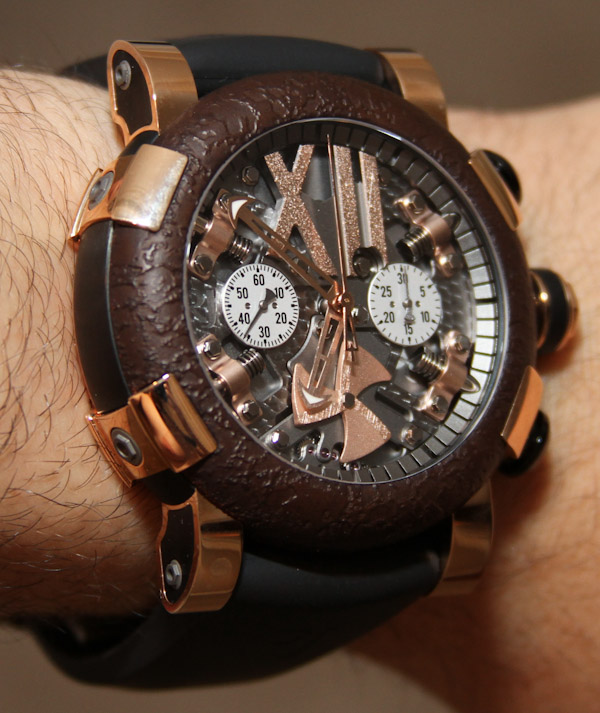 I yelled at someone today for not appreciating the work of a famous artist. A pretty talented artist that if you know anything about art, you’d appreciate their work. I felt bad after yelling at the person’s simple ignorance. They thought the painting was ugly, and maybe it was to them, but that didn’t make it bad art. I just shook my head grinning to myself while saying quietly, “the notions of uncultured minds.” I had a little bit of a snob moment. Or maybe it was just that I didn’t like how someone wasn’t able to recognize talent or skill, regardless of the outcome of that talent or skill. The natural next thought was to remind myself that appreciation of talent and skill is a learned trait. I then got back to thinking about watches.

Early in 2012, I first set my hands on a new Romain Jerome Steampunk Chrono and instantly started to like it… much more than the “Steampunk” watch that came before it. I really fell in love with the little spinning ship propeller on the dial. It was connected to a hidden rotor and a multiplier gear that made it spin quickly when you moved your hand around. This fun feature is purely non-functional and for amusement. Which in a way is a good manner of describing a lot of what Romain Jerome does. The best way to see the brand is like a toy maker for rich adults with a slightly dark sense of humor. That, and the brand’s design ethos is sort of anti-luxury using luxury materials with a distinct generation X twist. That, and it is potentially difficult to even understand if the world of watches is new or foreign to you. 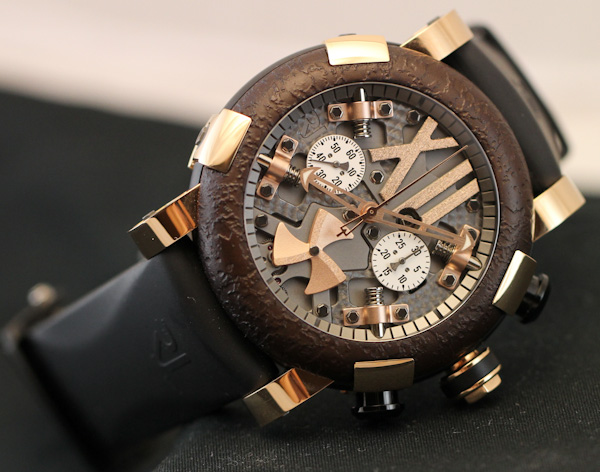 I sit here playing with a $30,000 plus toy in my hands which only a select part of the population can even understand. Romain Jerome is a sort of boutique brand with a loud voice. Producing only limited editions, they make totally strange watches that sort of say “fuck you” to a normal suit and tie person and require the wearer to decide “how will I pull this watch off today?” When I look at the majority of RJ watches, the first thing I notice is that none of them were meant to go with any ordinary outfits. This sort of forces the people who wear them to “fit the role,” carefully deciding how to carry themselves on any day they’d like to wear an RJ. It is a big responsibility. Just look at this thing. A 50mm wide gold and rusted steel monster with a steampunk theme. How do you pull that off on a normal day?

Part of the fun is in trying to pull it off. Seeing what the watch goes with, and what situations go with the watch. It is more a wearable, usable piece of art and sculpture than it is a tool. And this watch comes from one of the mothers of all controversial weird watch collections. That being the Romain Jerome Titanic DNA watch that I previously reviewed here. Metal taken from the actual sunken Titanic is used in the formulation of the metal bezel which is artificially oxidized under water to create the rusted look. RJ is actually shy about mentioning this detail which caused them everything from fame to shame. But right there on the rear of the watch it says “Made with Parts of the Titanic.” A message sitting over a ‘soft to the touch’ and beautifully rendered image of a propeller in titanium. RJ does not skimp the detailing. In my experience, they use some of the best suppliers meaning that each part is very well-rendered and removes any and all notions that the watches are cheap. They aren’t of course cheap, but it usually requires years of handling many different watches to get a feel for these things. 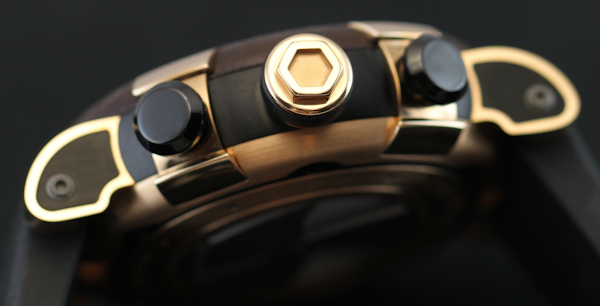 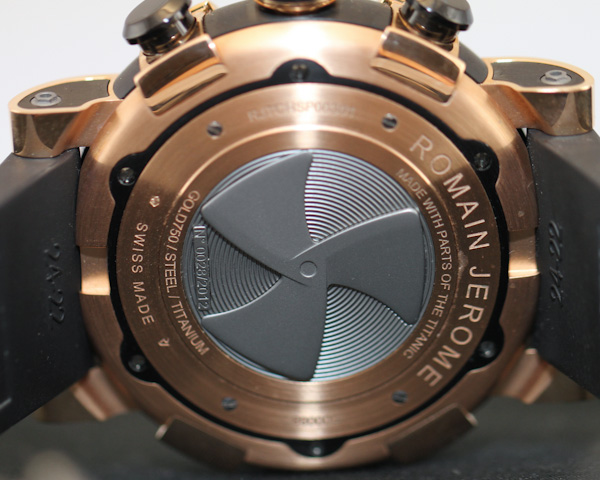 As I mentioned, the case of this Steampunk Chrono is 50mm wide. That is pretty big, even by RJ standards. It is large and heavy. Having said that, it totally rocks. The assortment of materials and details actually make it look a bit smaller than it is. Everything is thick and wide, which really helps it from looking “massive.” The case is made from 18k red gold, titanium, PVD black steel, and of course the oxidized steel bezel. Oddly, this version has black chronograph pushers while some pictured versions have gold chronograph pushers. Just one of those things I suppose… Attached to the case is a rubber strap with a gold, steel and titanium deployant clasp. While I like the rubber, I’d really like to see the watch on a shiny alligator strap as well.

I am not going to delve much into the case design details as most are not new and anyone familiar with RJ products will recognize them. The claws on the bezel continue to look cool. Those not interested in a watch like this in gold have the option of a few other versions in titanium and steel. Despite the hefty size of the watch, it is actually rather comfortable. On the wrist it does sort of sway from side to side like the actual Titanic, but not in an overly disagreeable manner. Just don’t consider it as a great watch for sport activities. 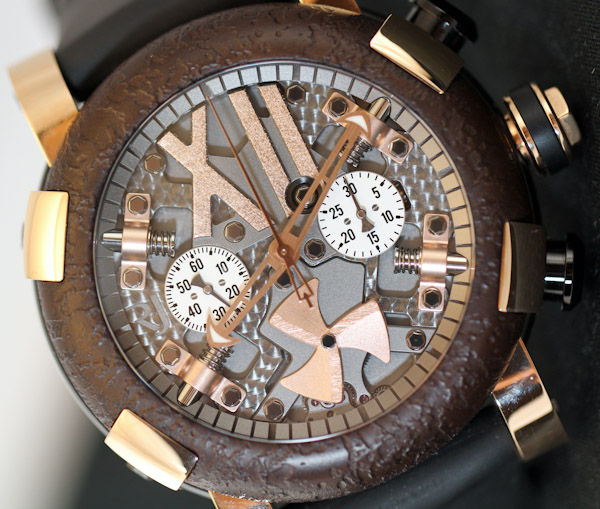 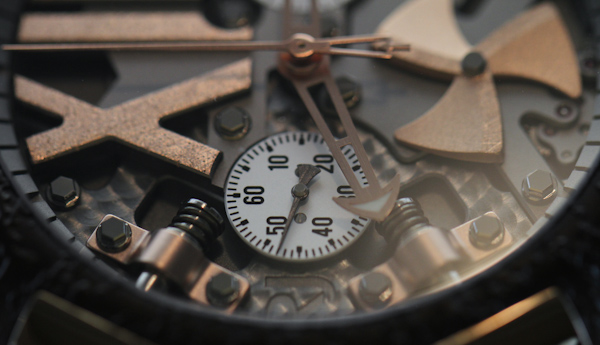 The dial of the Steampunk Chrono holds much of the magic. The Steampunk collection was RJ’s not-so-subtle statement to high-end steampunk aesthetic enthusiasts that “we have got the watch for you.” While the watch does not completely fit the mold of what steampunk accessories should be, it does take the concept and keeps it rather close to the heart. Ditch the rubber strap for something leather and worn… and you’d get a bit closer to true steampunkery. Amusingly, you get many forms of metal finishing on the dial. There is perlage polishing, satin, and brushed finishes, mirror polishing on the many screw heads, and the “rough brushing” as I call it on the 12 o’clock hour indicator and parts of the gold propeller.

In a unique design move, Romain Jerome decided to keep the subdials very standard looking. As though they are vintage gauges taken from some machine… and then miniaturized. This not only gives the watch a very usable 30 minute chronograph (and subsidiary seconds dial), but also adds to the thematic charm. There is in fact, a bit of lume in the tips of the hands. The dial also has the most subtle amount of skeletonization with peeks at parts of the movement. You are either very much taken or put off by the dial. It is a design which is for sure polarizing, but people who like it will certainly enjoy playing with their toy. 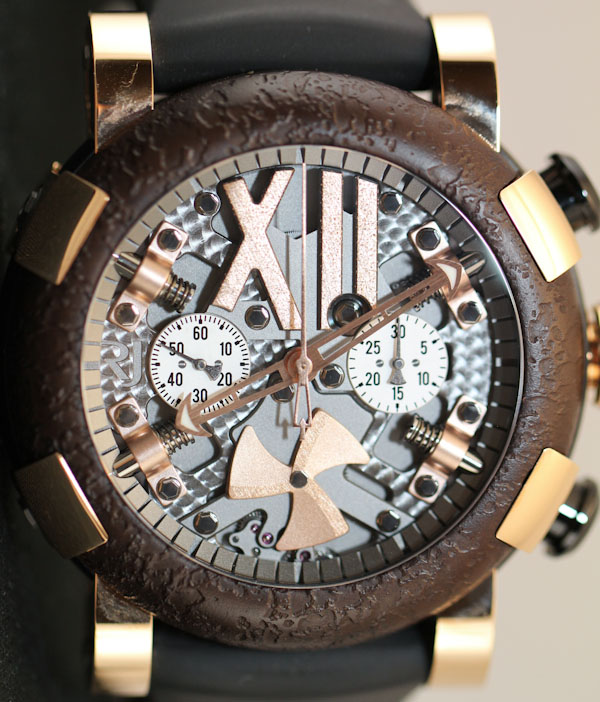 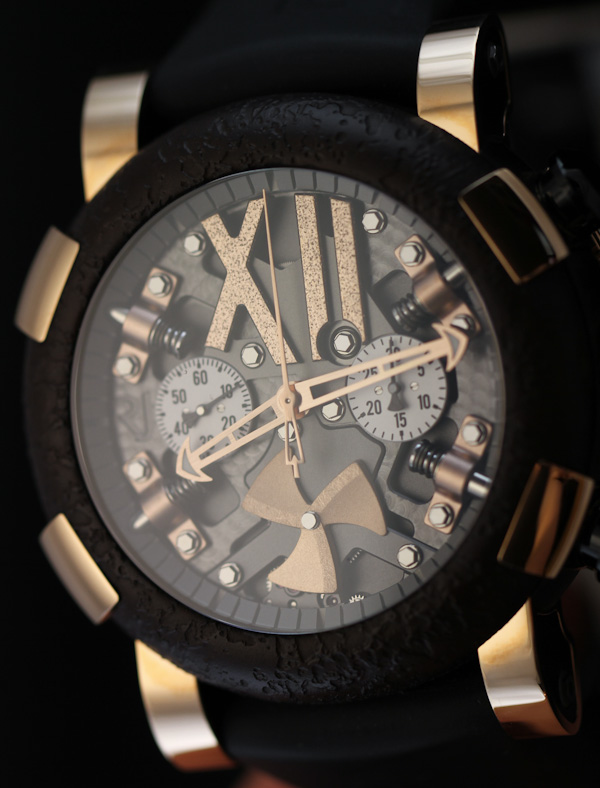 Inside the Romain Jerome Steampunk Chrono is a Swiss made caliber RJ001-CS automatic chronograph movement which I believe was done for RJ by Concepto. It has a custom Romain Jerome automatic rotor as well and 42 hours of power reserve. The watch is wild and “crazy,” which is a term I find that the Swiss like to use quite a bit when discussing their own ideas which don’t fit within Swiss conservatism. I am beginning to believe that many Swiss people who participate in the production of wild designs such as this might actually think they are crazy, rather than just creative.

Returning to the original idea in this watch review article, I find myself being in the position as a well-educated watch lover reviewing a rather niche product with an appeal which is intentionally not mainstream. Those uninitiated in the “ways of the watch” can easily dismiss or love watches like this for all the wrong reasons. One of the ways I personally define “art” is to describe it as something that while I may or may not find it aesthetically appealing is something that required a degree of imagination and skill to create. I say all this in anticipation of the people who just don’t “get” what the Steampunk Chrono is all about. But I will remind you that it is in fact crazy, you just might need a lot of the right type of education to know why. If you haven’t learned yet then I’ll get back to playing with this toy like it was some guilty pleasure. The Romain Jerome Steampunk Chrono is limited to 2,012 pieces per model and this ref. RJ.T.CH.SP.003.01 model has a retail price of $32,400.

Necessary Data
>Brand: Romain Jerome
>Model: Steampunk Chrono
>Price: $32,400
>Would reviewer personally wear it: Yes
>Friend we’d recommend it to first: Non-conservative watch lover who is less interested in wearing something popular and more interested in wearing something masculine and unique.
>Best characteristic of watch: It is very well-made for what it is. A lack of conventionality adds heaps of character and creates a good conversation on why people love or hate it.
>Worst characteristic of watch: Very large size makes for a sometimes unwieldy wearing experience.