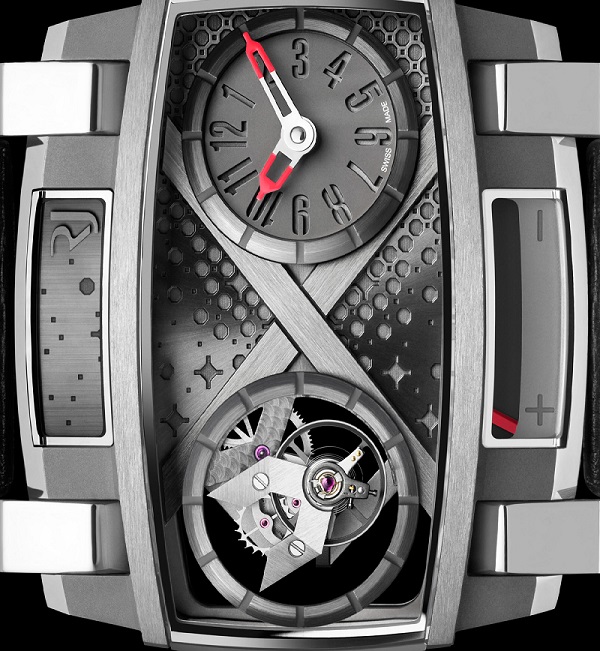 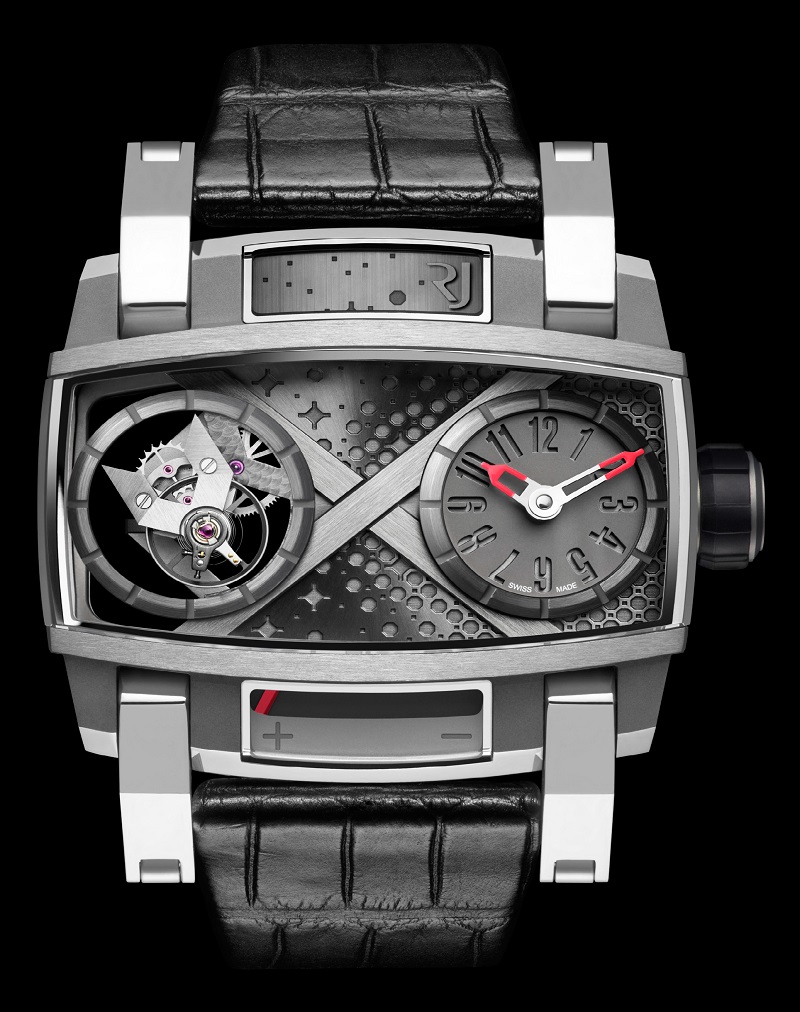 The Moon Orbiter watch is completely out of this world and that is just how Romain Jerome likes it. I was sitting with Romain Jerome’s CEO recently in Las Vegas while we sipped on drinks as we was going through the final testing of the Moon Orbiter whilst wearing it on his wrist. There wasn’t too much Vegasy about it, but it did look as though his wrist was an alien world landing site for a strange new watch. Roman Jerome unveiled it to me last year as a prototype – and I was impressed with the novel space watch that included an automatic flying tourbillon movement and new case design.

If Vianney Halter’s Deep Space Tourbillon wasn’t enough Star Trek watch for you then once again you have a nod to the popular sci-fi genre with a tourbillon that looks less than coincidentally like the Starship Enterprise. Everything else about the watch is meant to combine the brand’s love of space in their Moon Dust DNA and Moon Invader collection, as well as extend the sci-fi theme we recently saw in the also limited edition Romain Jerome Space Craft (hands-on). With the Moon Invader, Space Craft, and Moon Orbiter, the brand practically now has the world’s most expensive set of spaceship toys. I want to know when they are going to release the limited edition complete set with fully detailed backgrounds and action figures. 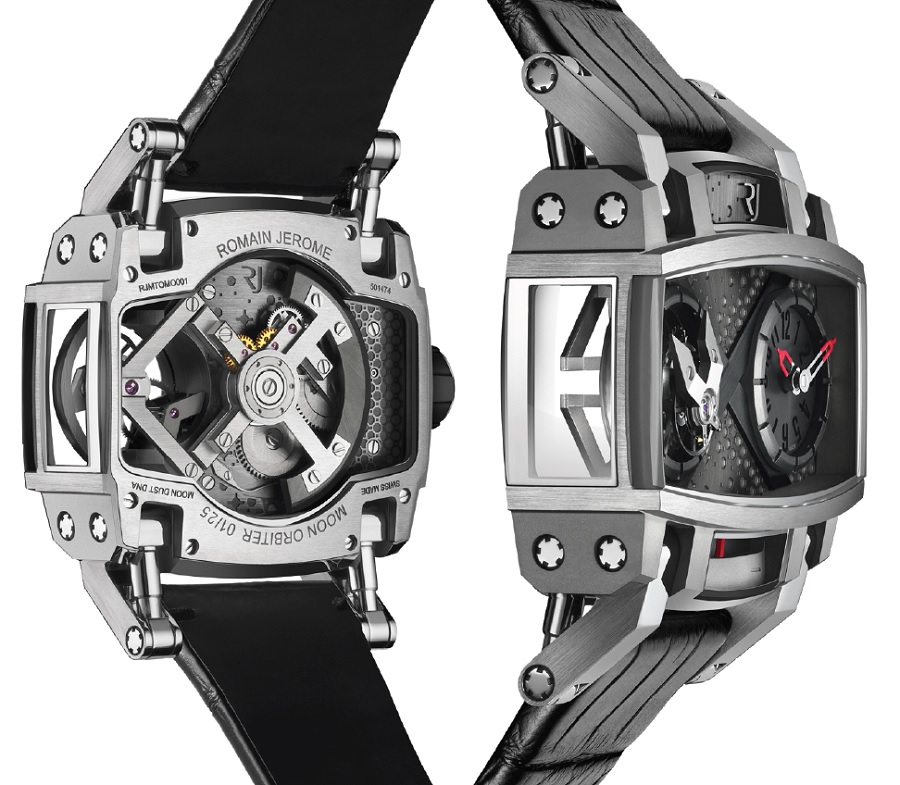 One of the more interesting parts of the new case design are the spring-loaded lugs. They are meant to look like hydraulic pistons, and are are designed to wrap the case around your wrist a bit. Romain Jerome has been playing with this idea since the Moon Invader case whose “landing feet” move with the straps. The case itself is in steel and 48.5mm wide. Though being wider than it is tall, it can easily fit on most wrists. The case has sapphire crystal windows on the front, sides, and rear, offering a nice view of the movement with its various textures. The bridges and dial have a hex pattern that looks like wallpaper from 2001: A Space Odyssey that eventually flows into something that looks like the background from your Galaga dreams. The signature Romain Jerome “X” makes a less than subtle cameo on the dial and movement.

The movement itself is uniquely made for the Moon Orbiter watch by Swiss La Joux-Perret and includes the the time in an off-centered dial with red hands. An additional red hand is used as a power reserve indicator on the lower part of the dial in its own window – a nice feature to have. The flying tourbillon has its own space on the left of the dial, and interestingly, does not have a view which is obstructed by the movement of the automatic rotor. I have no idea where the material makes an appearance, but Romain Jerome informs us that there are some melted down parts from the Apollo 11 moon lander in the Moon Orbiter watch. Attached to the watch is an alligator strap (very sci-fi there). While I wasn’t allowed to photograph the Moon Orbiter (yet), I have worn it and can say that despite its odd dimensions, it is totally wearable. A true geek dream for those whose love of watches is equal to their love of science fiction fantasy worlds. Romain Jerome will produce just 25 pieces of the Moon Orbiter with a price of $115,000. romainjerome.ch 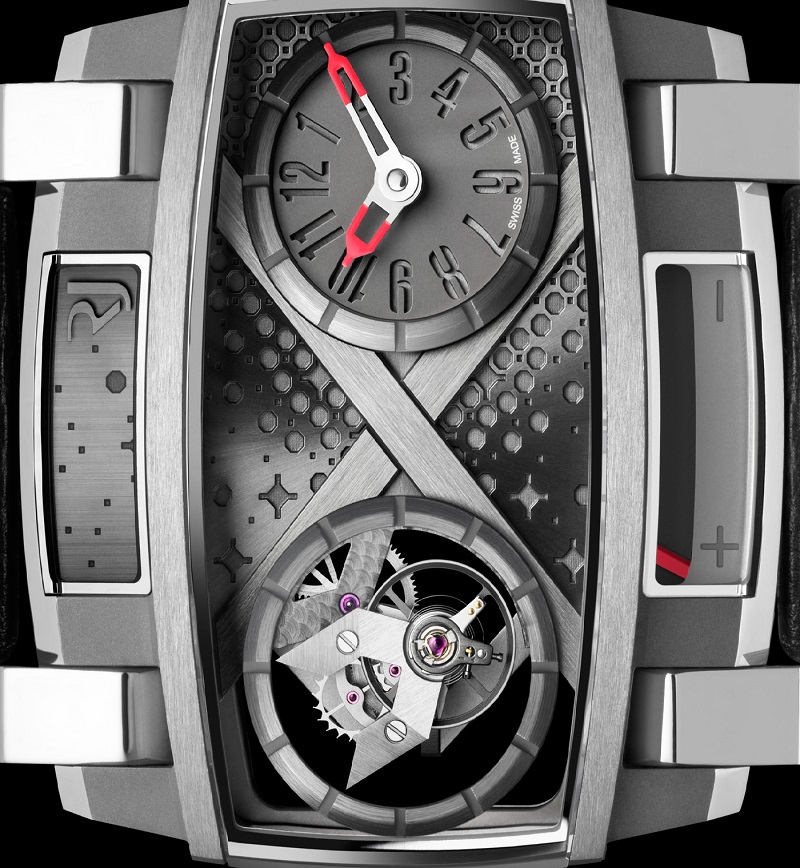