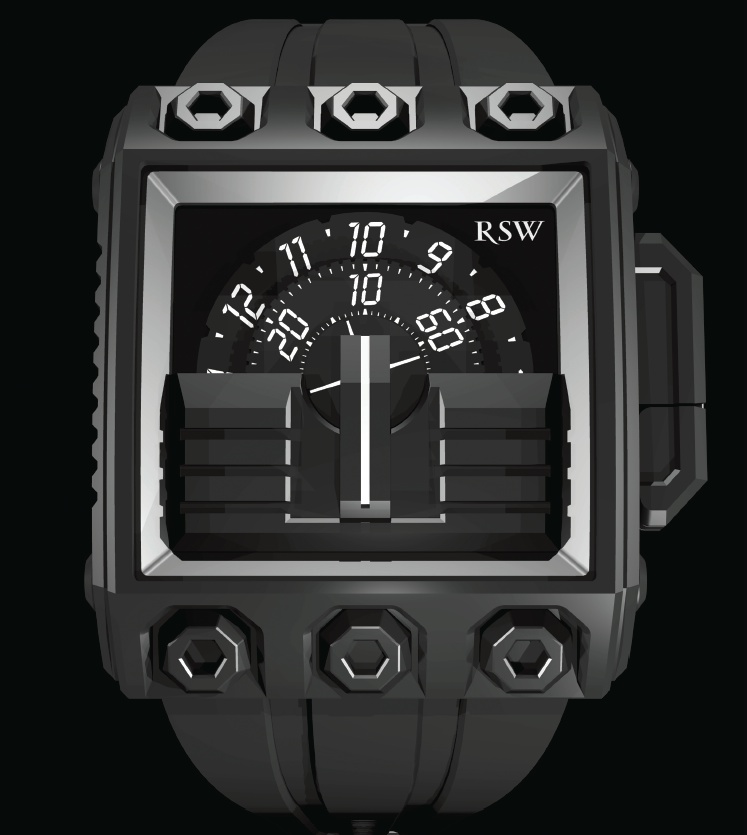 One of the boutique yet clever watch makers, RSW (Rama Swiss Watches), brings forth an interesting offering; The RSW Outland Automatic. RSW, whose name and logo font remind me of the shoe store line DSW, has solidified itself among those watch makers inventing modern futurism. Most RSW watches honestly don’t make a huge amount of sense to me. It is easy to craft language applauding their unique styling and bold appearance, but I am not entirely convinced the style will be lasting. On the other hand, I certainly have to compliment RSW’s ability to intrigue me.

The Outland utilizes an idea I actually considered some time ago using revolving disks to indicate the time rather than hands. With out major modification to a standard movement, you can have rotating discs that act as digital rather than analog indicators. If the concept of digital and analog is not clear to you, the idea is that digital shows something through abstract representation, while analog “looks like what it is.” Here the abstract representation of time are the numbers that we use (1,2,3,4,….), the analog representation are the hands orientating themselves to show the time. Digital and analog have nothing to do with electronic versus mechanical movements, as I have learned is considered the difference by some people.

Due to the fact that the RSW uses discs with digital characters (the numbers) combined with their analog rotation results in what is a hybrid approach, that I have called “Digilog.” No doubt this term is trademarked elsewhere, but the idea is clear. What I like is that RSW was able to combine the attraction of an analog watch, with the legibility of a digital watch. At least in theory that is the case. To tell the time displayed on the discs where they intersect with the broad white indicator line at the lower section of the watch. The outer disc reads the hours, then middle disc reads the minutes, and the smallest inner disc with minimal markers displays the seconds.

It is hard to say what life with this watch would be like. It could well prove to be a more comfortable means of telling the time over traditional analog watch faces, or it could be just a gimmick. Regardless, it is a novel idea worth paying attention to. Surrounding the discs is a common futuristic design that RSW uses. To me it looks like what happens when Art Deco meets 1980s industrial design. So many parts of the RSW Outland Automatic watch I want to press or push, but they are not buttons; and I don’t know whether I am looking at a mini car engine or modern looking turntable. Always something interesting coming out of RSW.