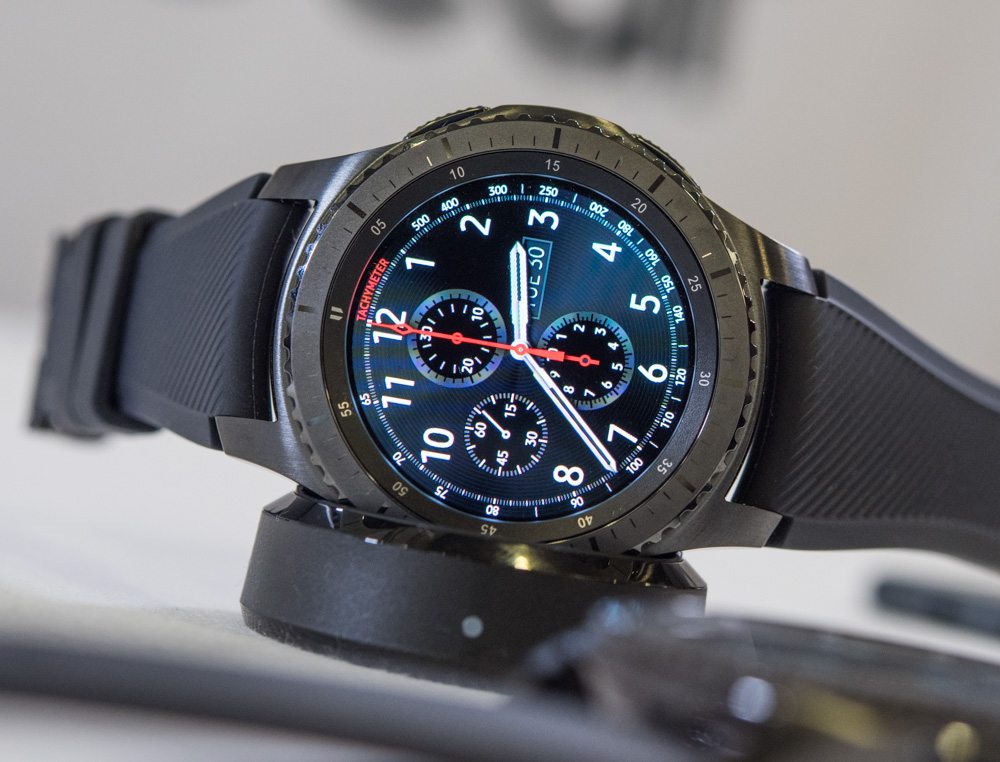 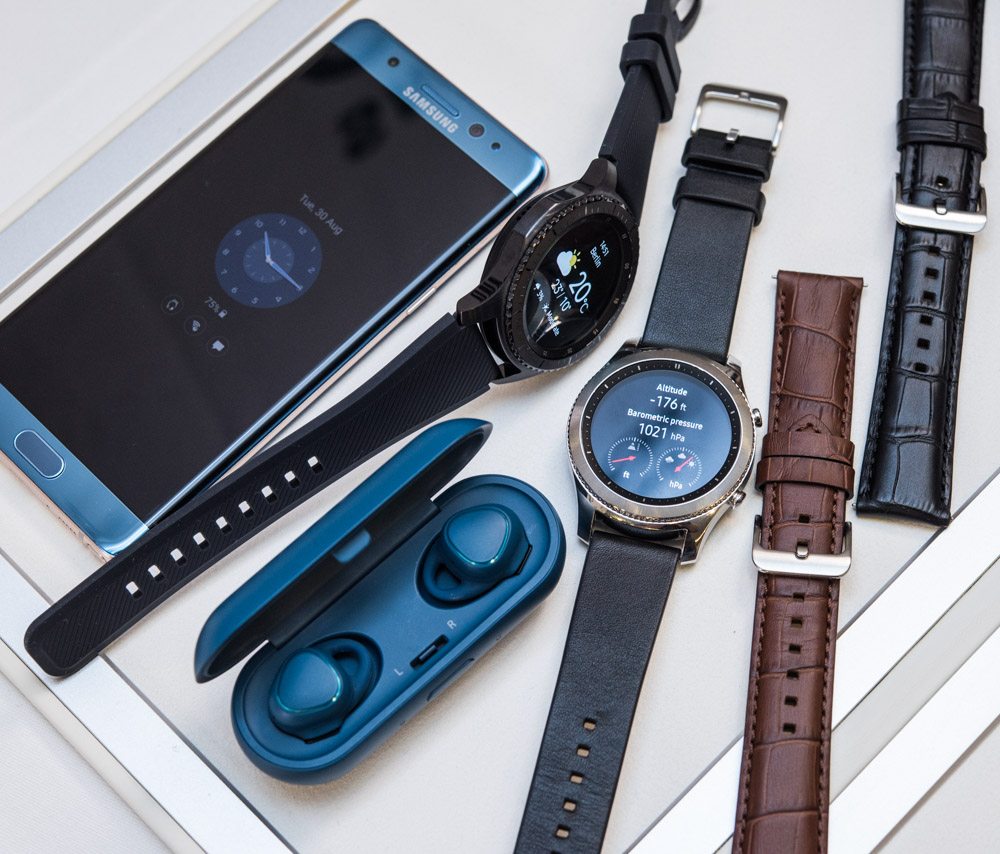 From a marketing standpoint, Samsung is sort of positioning the Samsung Gear S3 Frontier as the more “outdoorsy” model, but from what I understand, both models can but up with the same type of daily abuse which include being IP68 rated (dust, dirt, and shock resistant), rated to spend up to 30 minutes at a depth of 1.5 meters (that is about 5 feet). That technically means you can play in the rain and wash your hands with the watch, but Samsung is actually being humble about the actual water resistance which includes light swimming as well. 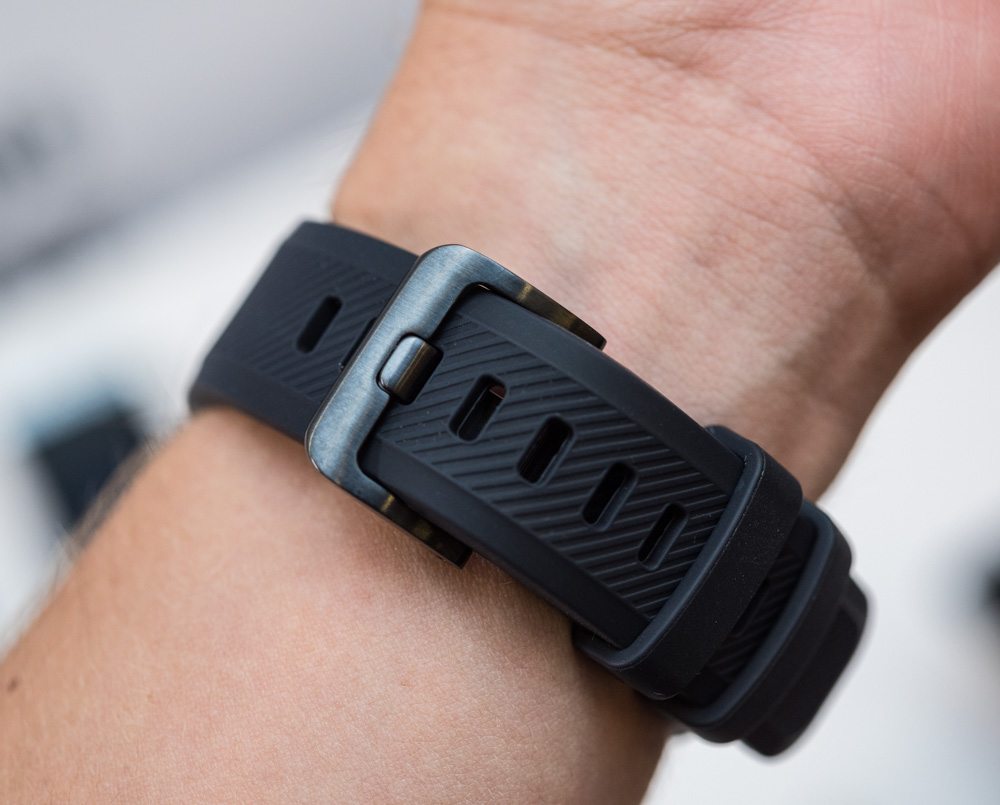 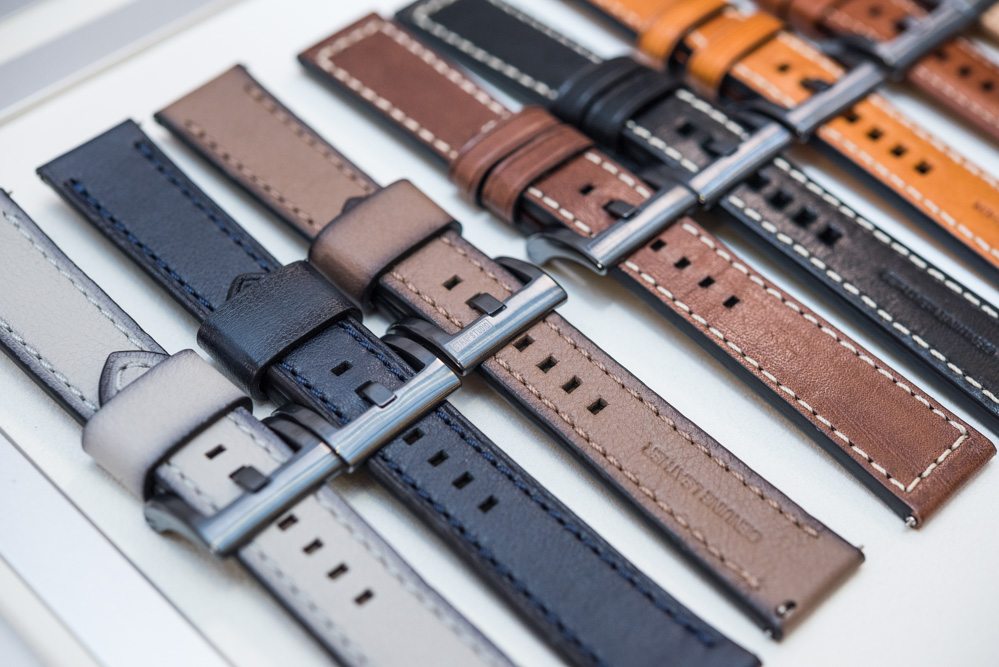 Samsung also claims that the Gear S3 has been built to be more shock resistant and to better handle sudden temperature and humidity changes, from below freezing point up to 40 degrees Celsius (104 degrees Fahrenheit) 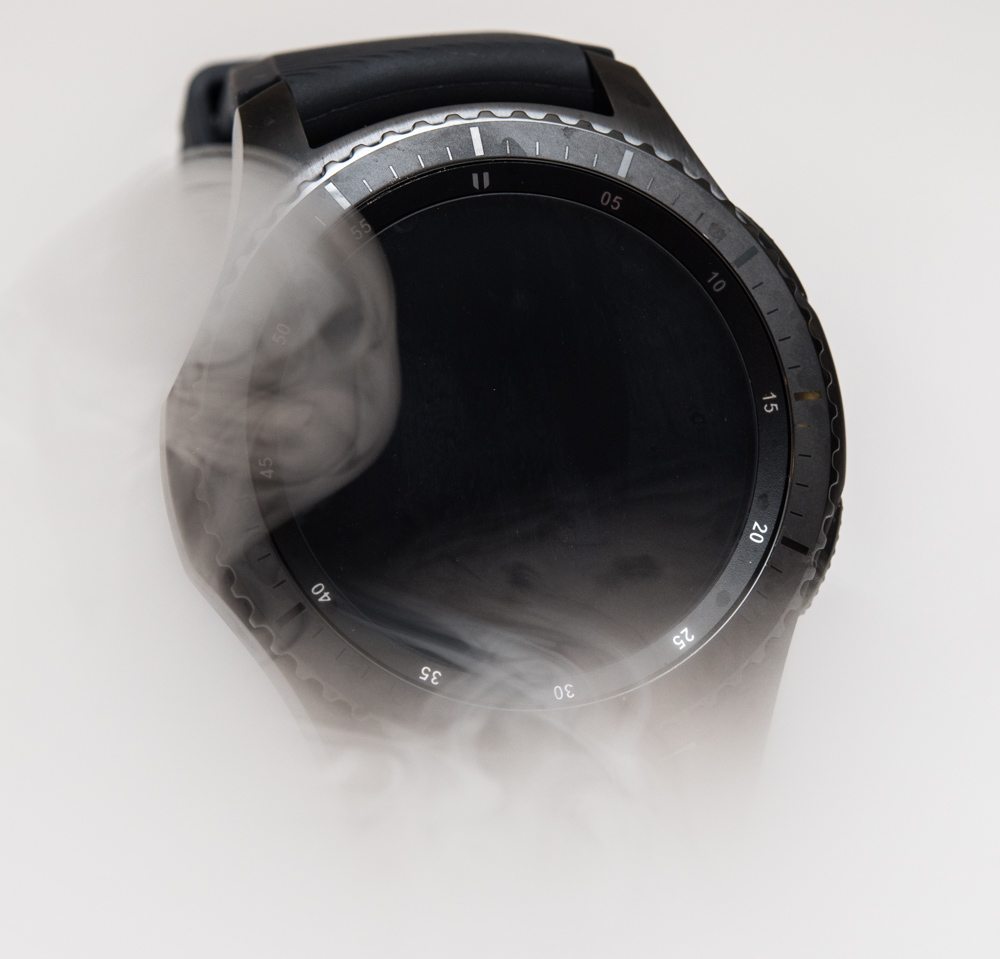 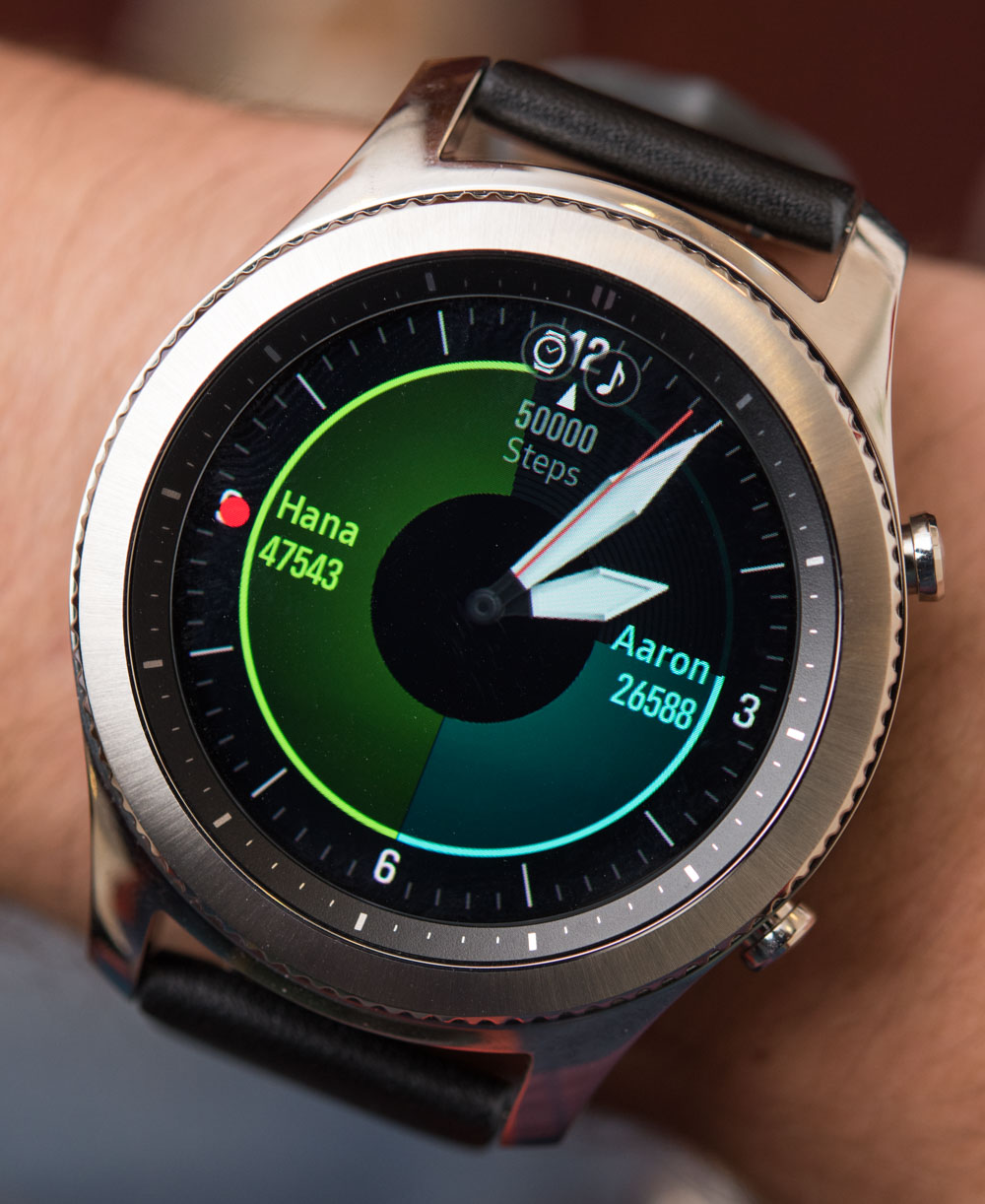 Samsung and Arpa designed the Samsung Gear S3 Classic to have plunger style pushers and a smoother, brush-finished bezel, while the Samsung Gear S3 Frontier has closer-to-the-case, rounded rectangular pushers with an insert that has a knurling texture to it. It also has a bezel with markers more akin to those on traditional sport watches with rotating bezels. 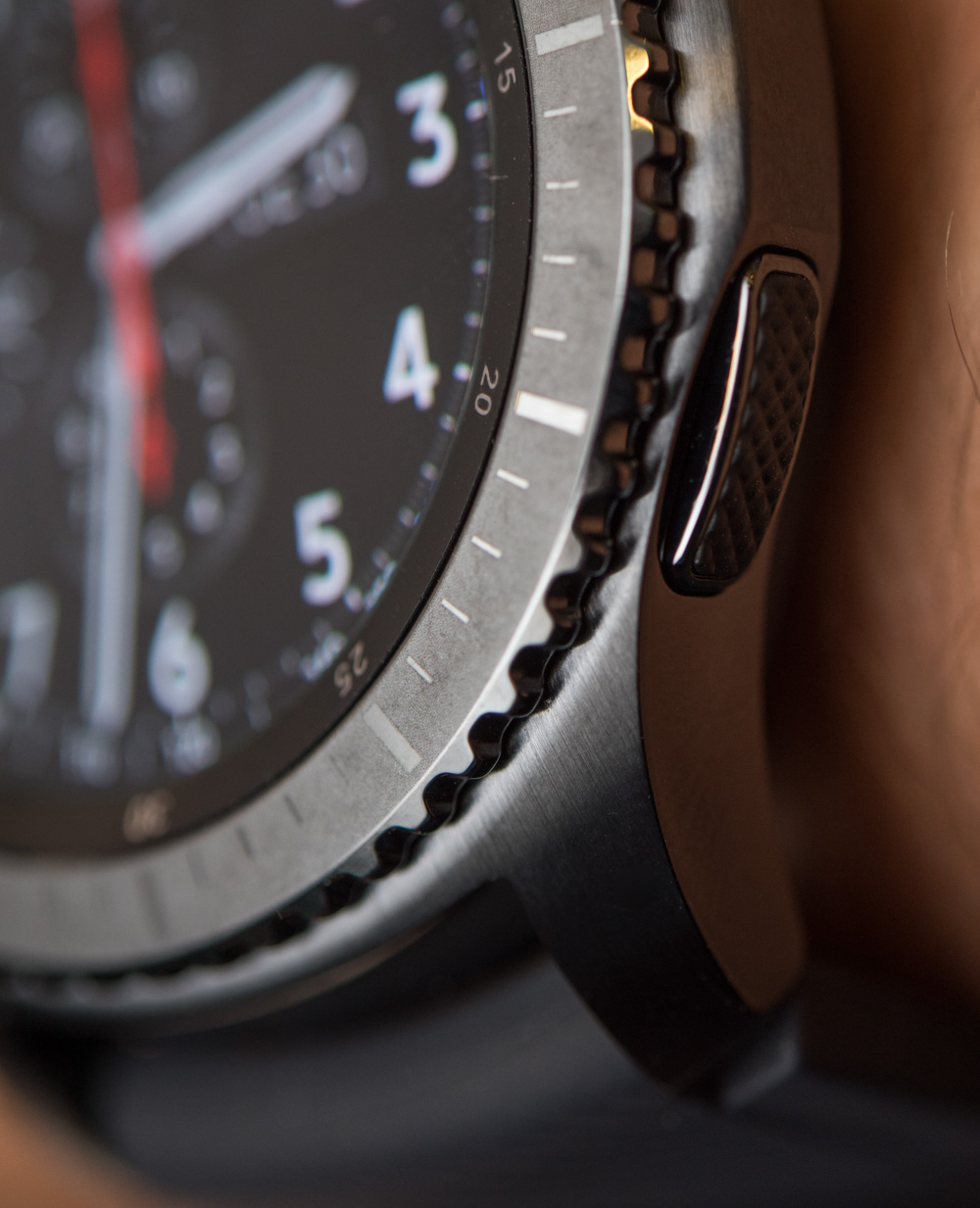 The rotating bezel system which is used to help navigate the user interface is very clever. Magnets in the hardware help to dynamically create resistance and feedback so that when you turn the bezel, there are natural “stops” or “notches” where there are menu items or whatever it is that you are scrolling through. When you reach the end of a list of menu items, there is a more powerful vibration to give tactile feedback for running out of menu items. 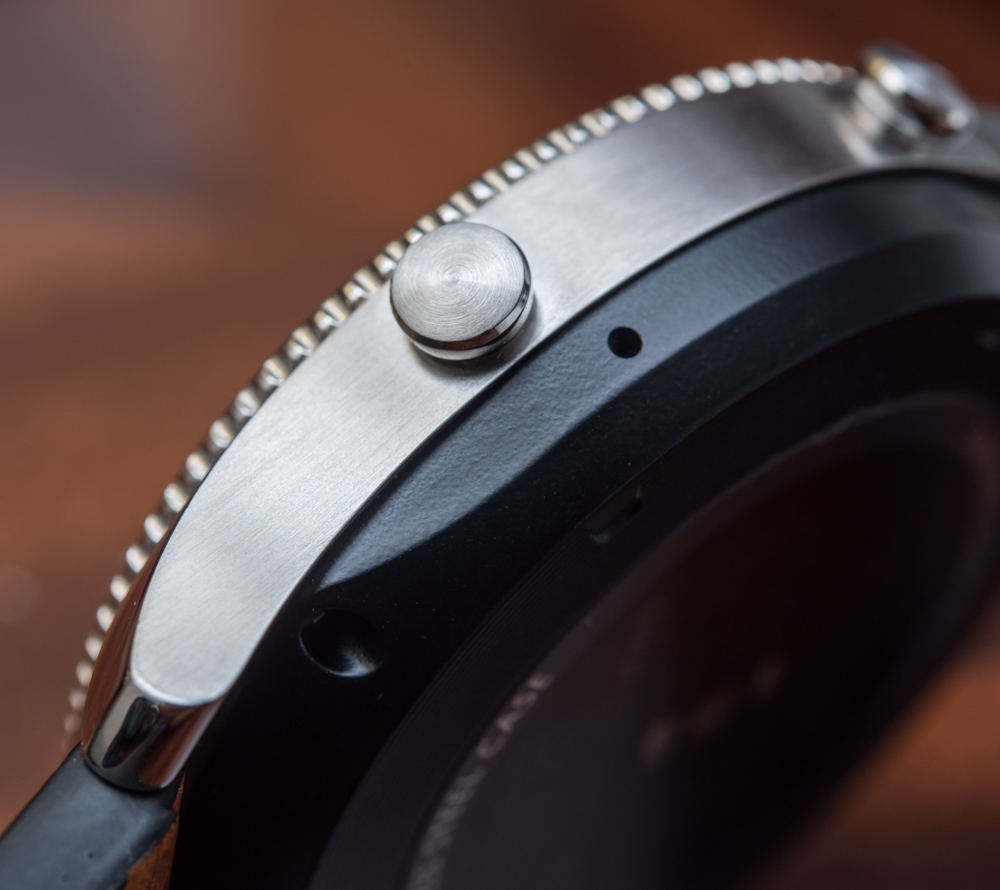 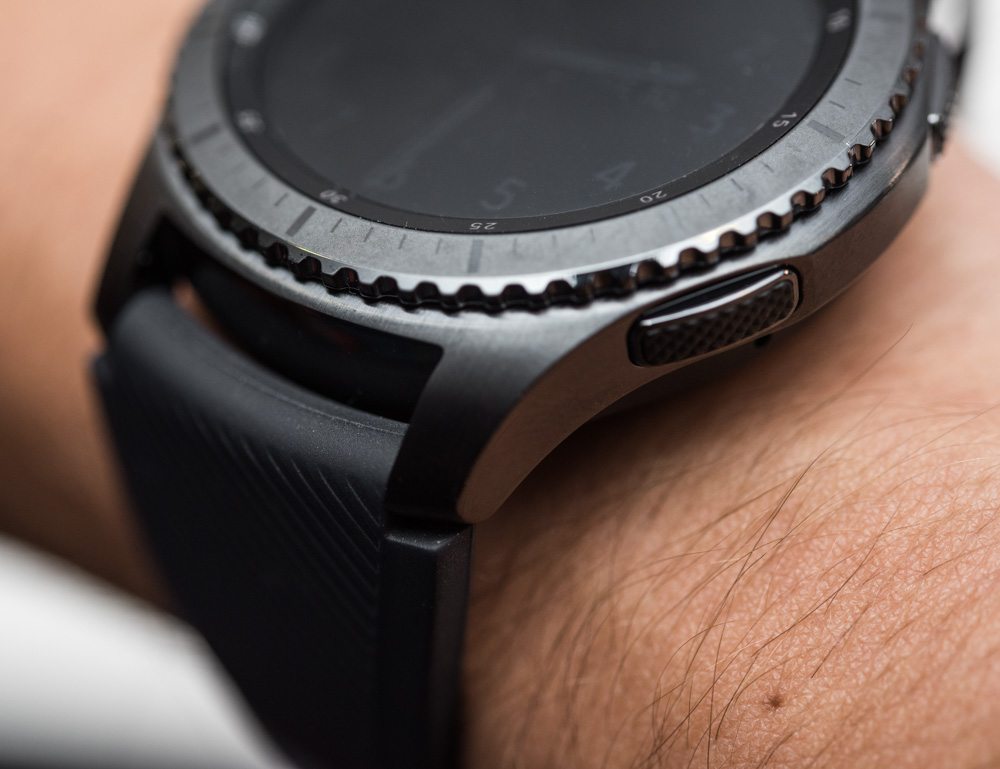 The bezel is both fun to use and inviting, being paired with two external case pushers as well as a touch screen. I think the Circular UX input system is here to stay, and even though it works very well right now, it is so useful that I can’t see Samsung not continually making advances with it. One can call it Samsung’s version of Apple’s Digital Crown, but in practical daily use, the size and prominence of a rotating bezel make it easier to use for many tasks (including simple things like turning it to reject or answer a phone call). 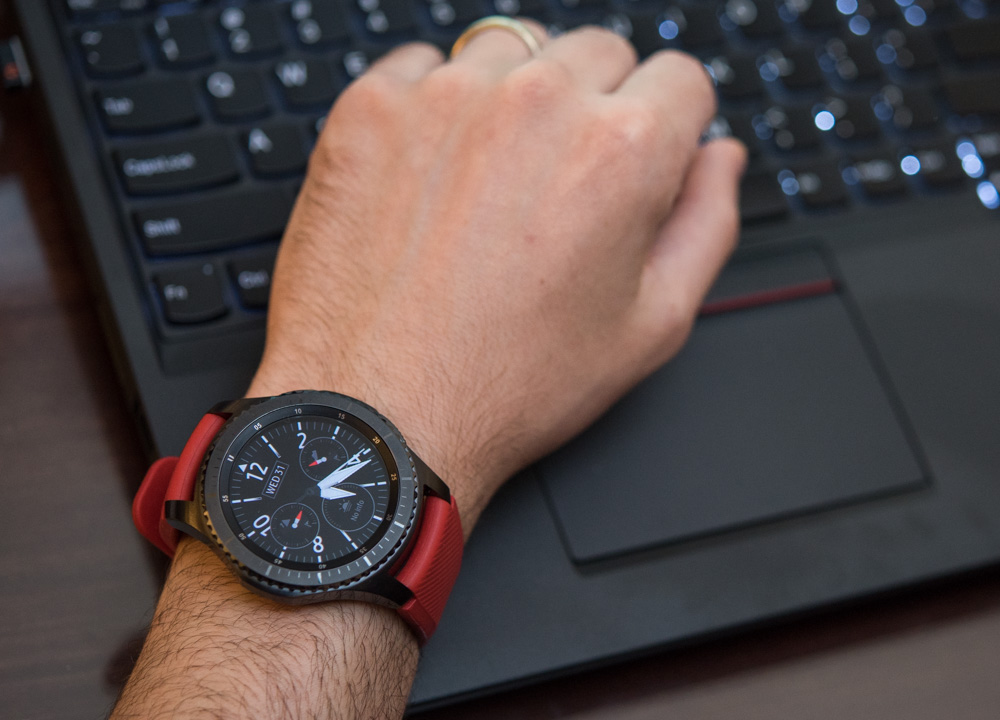 The Gear S3 Frontier with its display in Always-On mode: colorful, animated and detailed.

People who like watches such as myself should be the most excited about one particular feature of the Samsung Gear S3 that is crucial to the watch’s appeal: the Always-On display. It is true that the case is attractive to wear and look at, but that alone is hardly enough to attract a large group of people to wear and enjoy any product. I’ve made the analogy before of comparing a watch face to a human face: without being able to see it, one is not able to convey personality. In other words, if a watch case is its body, then the watch face is its soul. What many smartwatches lack, in my opinion, is the soul of a timepiece. And of course, this is something I and probably many others have brought up time and time again. 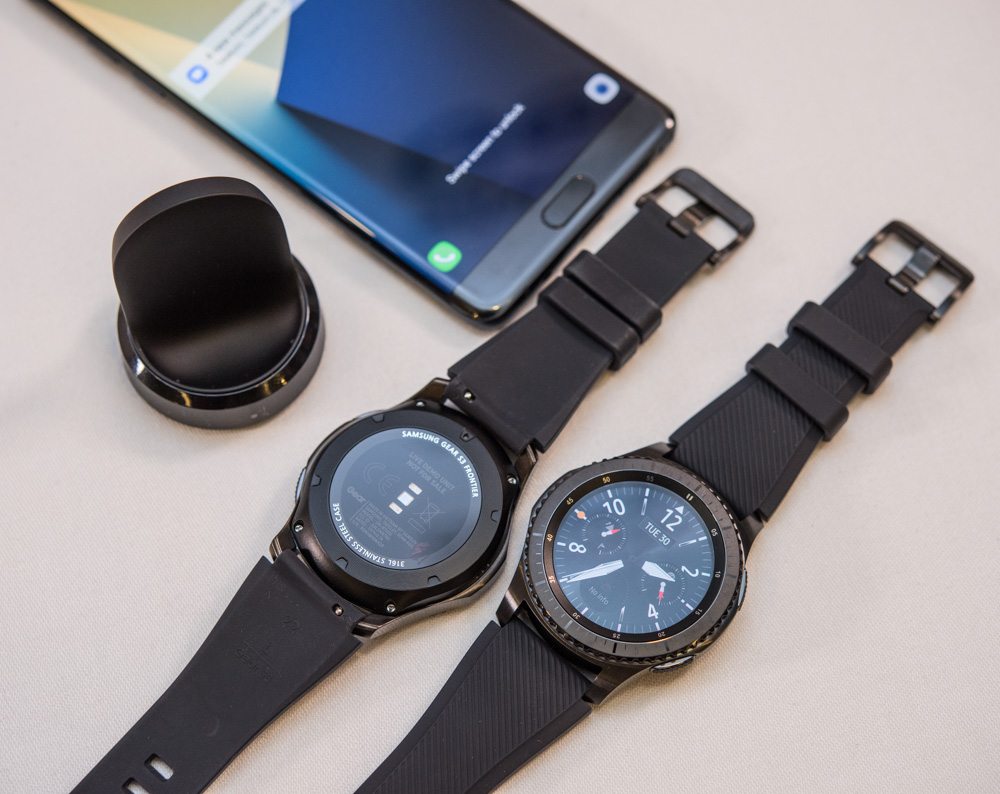 In fact, my biggest gripe with the generation one Apple Watch is that it lacks an always-on state for the display. Here is this cool device I see on people’s wrists, and yet the personality I want it to have in terms of the dial is missing most of the time. With an always-on display, you get the feeling of a “real watch,” and that, for me, is a serious game-changer. To be fair, Samsung didn’t invent this system for the Samsung Gear S3, but the way it is implemented in the watch is novel, and totally worth being excited about. 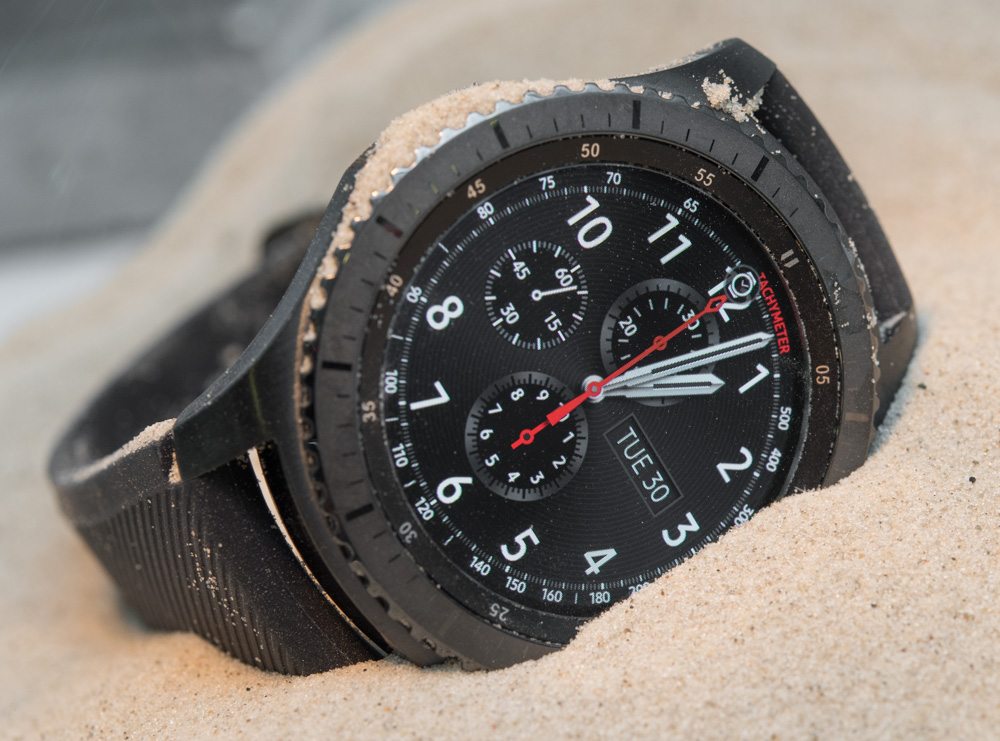 The “Always-On Display” system works better than pretty much all the other ones I’ve seen out there, even taking into account the smartphones that do this. What this means is that even when the screen is not fully activated, there is a persistent always-on state to the screen which means that the screen never goes totally black. Yes, you get a different dial when the screen is fully activated, but even in the AOD state you get a full-color display with continuous animation. Speaking of the screen, on the Samsung Gear S3 it is protected with something they call Gorilla Glass SR+. That is basically one of their newer protective glass products which is not only supposedly very scratch (and shatter) resistant, but also happens to repel finger print smudges really well.

Actually, you can disable the always-on display in order to further increase battery life. Without it, the Gear S3 manages to get 3-4 days of battery life, as reported by Samsung. With the always-on display active, you get 1-2 days of battery life, but the reward is a bright (naturally OLED-lit), full-color (16 million colors) display that is attractive and can be seen from a few feet away. Coming in at 1.3″ wide, the display is noticeably larger in diameter on the Samsung Gear S3 when compared to its predecessors, and with its 16 million colors and 360 by 360 pixel resolution and impressive brightness, it does not fail to impress – not after the first sight, nor after some extended wear. 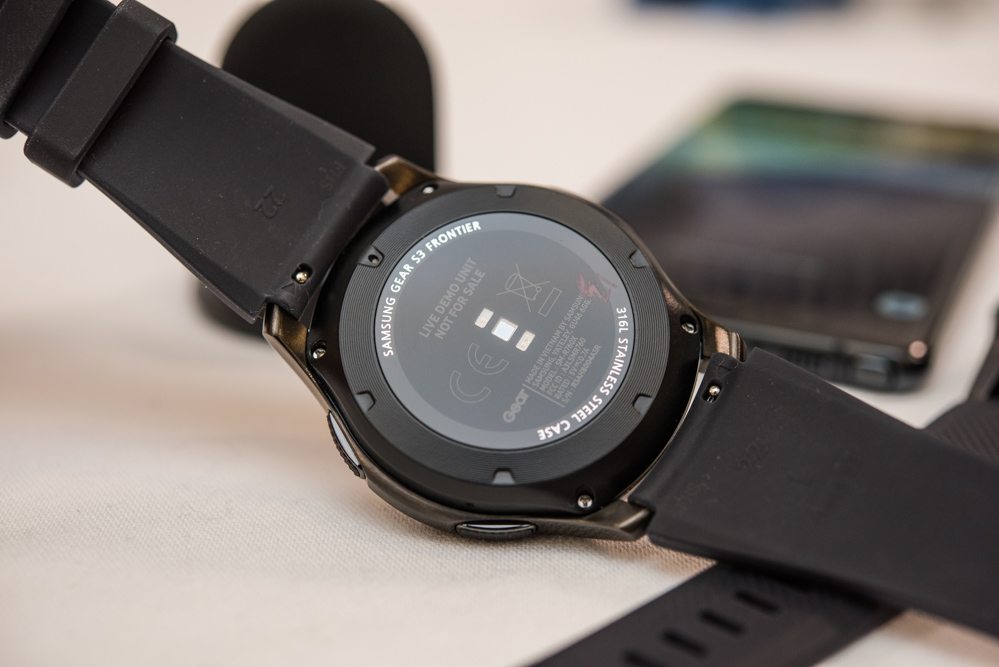 Speaking of the battery, the Samsung Gear S3 is equipped ith a 380 mAh battery that can be charged wirelessly, using a compact dock that, in turn, is powered by your standard micro-USB cable. We’re told that with 15-minutes on the charging dock, the Samsung Gear S3 can go from a completely depleted battery to 8-hours worth of capacity – claims which, along with a more detailed run down on battery life, we’ll test in a full review. 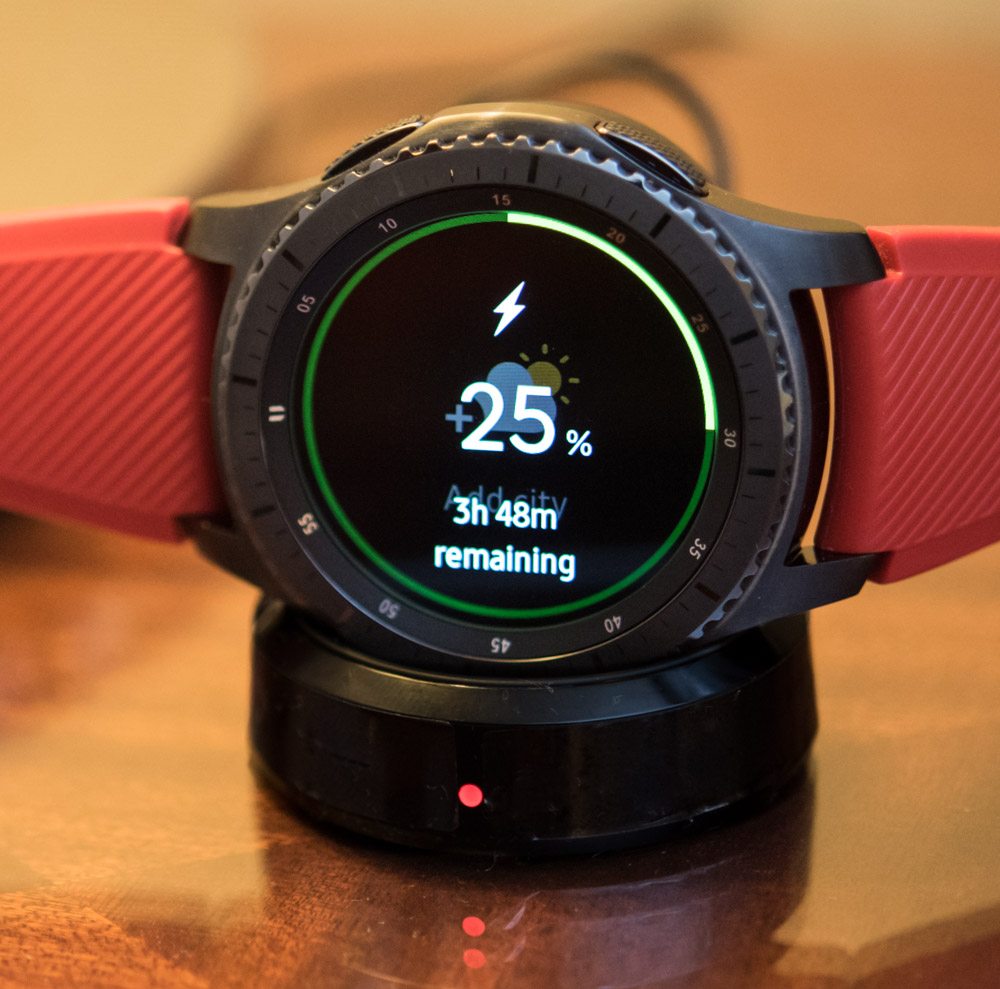 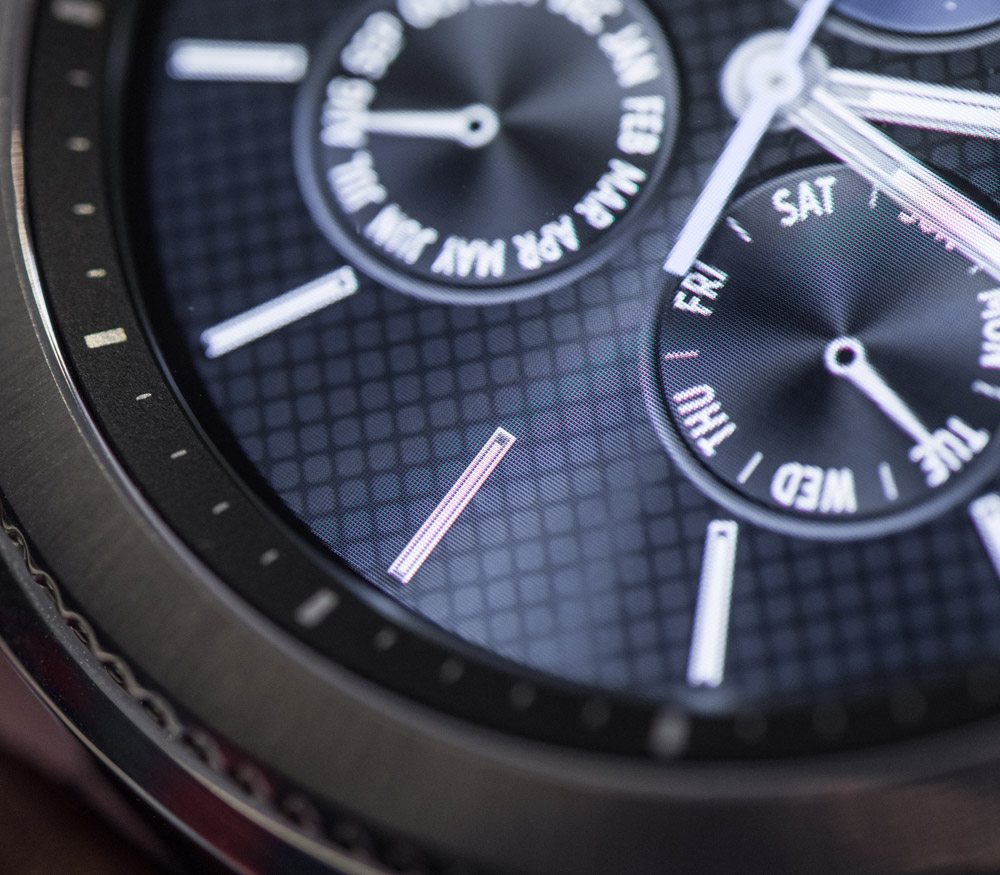 Using its movement sensors, the dial simulates the sheen of metal dials on traditional watches.

As I noted previously, the display is even animated so you can see things like the seconds in constant operation. This is an incredible step forward in a smartwatch having the requisite characterful personality a lot of people demand when wanting to wear a timepiece that is both useful but also speaks about who they are. You can never deny that a watch is about both utility and style, and in the Samsung Gear S3 you get both. 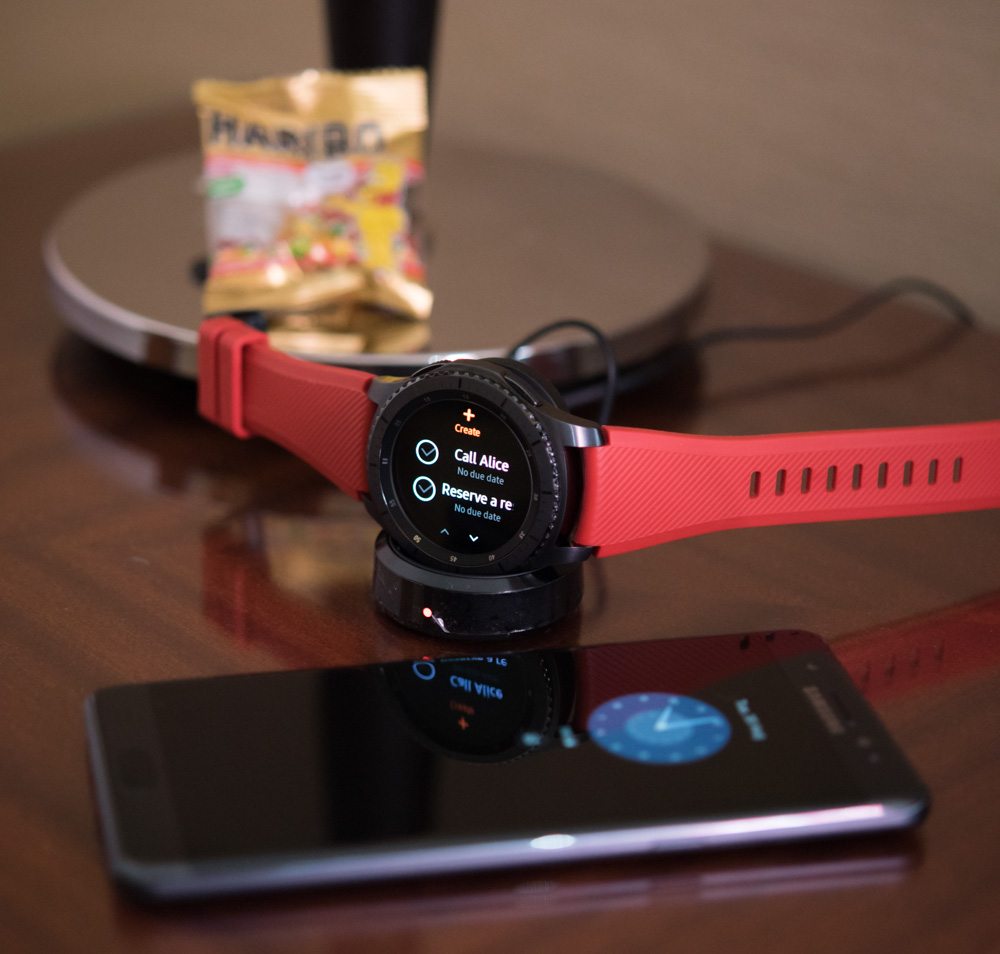 In designing the Samsung Gear S3’s always-on display, Samsung pulled form lessons it learned when making the Galaxy S7 and Note 7 phones which have a similar always-on state. It is true that previous Samsung Gear models had an always-on state, but the battery drain it caused was not ideal. The Samsung Gear S3 uses a distinct system with its own RAM to power the always on-state of the AMOLED screen so that it doesn’t pull from the main processor when the watch is in a resting state.