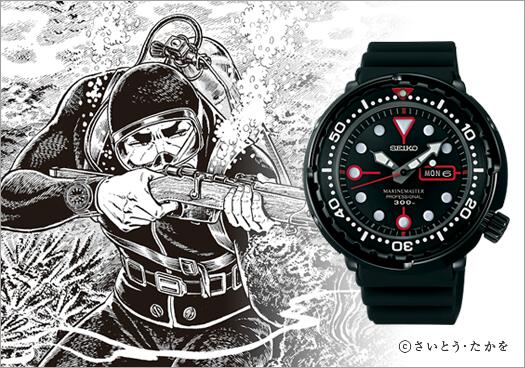 This year Seiko will have released four limited edition watches in honor of the famous Japanese manga series Golgo 13. “Duke Togo,” aka Golgo 13 is the main character of the manga series that has been running since the late 1960s. In Japan, Golgo 13 is extremely recognizable and the four watches are true fanboy collector items of the highest quality. Now you too can kill enemies just like Duke! This isn’t the first time Seiko has created limited edition watches for an anime or manga series. In the past I discussed pieces such as this high-end Seiko Galante watch for Astro Boy. Another super cool watch.

It has been too long since I have enjoyed some good anime. As an American, I had to grow up with Japanese culture from afar, but it was still very influential. I’ve long enjoyed Japanese cartoons and characters – even if I didn’t have all the cultural lenses with which to fully understand them. I need to catch up a bit. What good stuff has come out in the last few years that is on par with movies like Akira and shows like Cowboy Bebop? To some it might seem strange that Seiko is releasing limited edition watches for comics or cartoons. However in Japan these are serious cultural characters and the fact that they are animated or drawn does not make them any less important or influential. 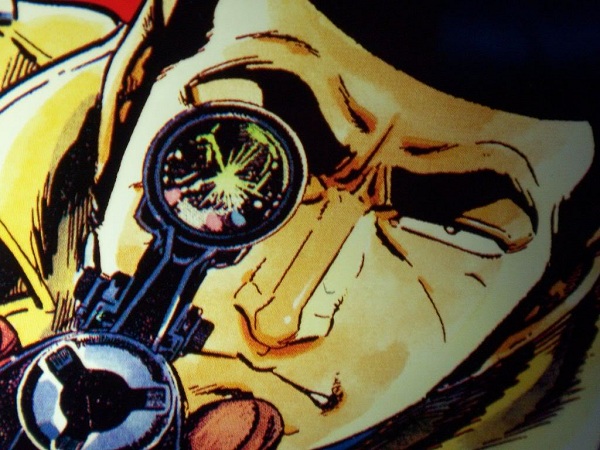 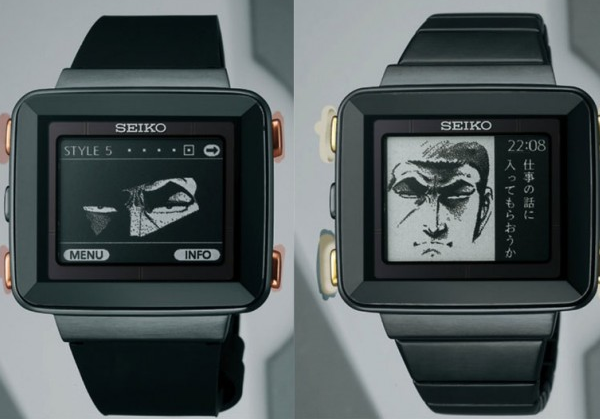 The first of the Seiko Golgo 13 limited edition watches is based on their recent limited edition EPD Digital watch released last year. This piece I believe is just called the Seiko Limited Edition Golgo 13 EPD watch. “EPD” is Seiko’s own term for their high-resolution e-ink display. There are two styles of the Seiko Golgo 13 EPD waches (ref. SBPA009 and SBPA011). The two versions offer slightly different colored pushers and the SBPA009 comes on a metal bracelet versus a leather strap. The e-ink display has a range of screens which show the time, world, time, and calendar functions. The quartz movement is also solar powered. Mixed into the watch’s functionality are images of Duke Togo from Golgo 13 – I thought that was pretty interesting. In this case, Seiko actually included Golgo 13 into the programming of the watch. The TV screen-like display and bracelet give the piece a retro-futuristic vibe, the steel, roughly 44mm wide case is black IP. Seiko will offer the SBPA009 as a limited edition of 500 pieces and the SBPA011 as a limited edition of 1000 pieces. Prices are 63,000 and 57,750 Yen respectively. 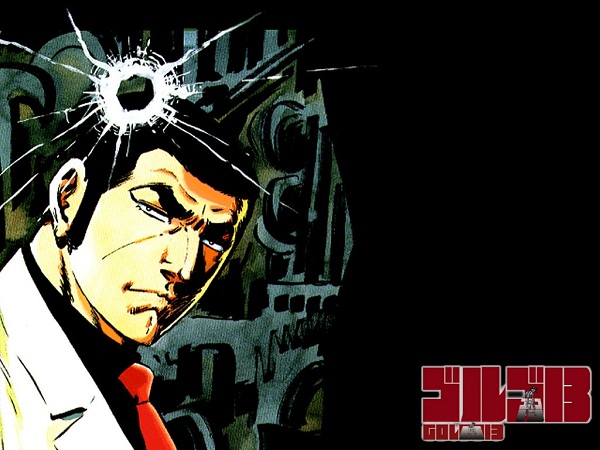 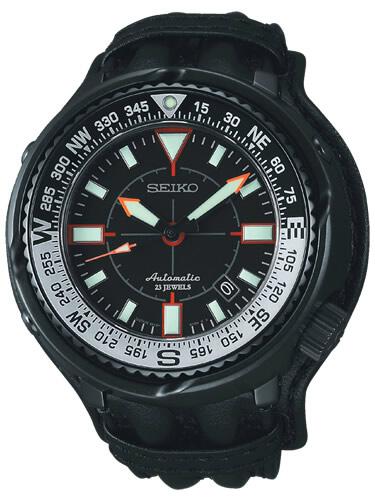 Not quite yet released are the limited edition Seiko Golgo 13 Land, Sea, and Air Prospex models. According to Seiko, they come out in September. These watches really extend the Golgo 13 limited edition watch concept further, and make for watches that even non-fanboys of the manga can like. Prospex watches are Seiko’s “Professional Specification” watches and range from good durable sport watches to really high-end professional-use dive watches. Makes sense for a professional assassin right? Each of the watches are based on existing Seiko timepieces but have special color schemes and Golgo 13 engravings and branding. 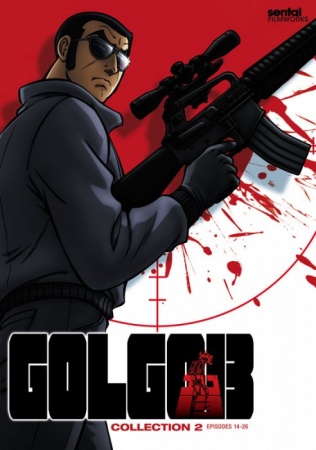 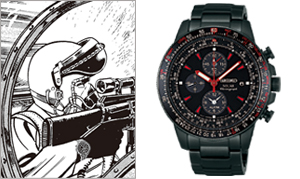 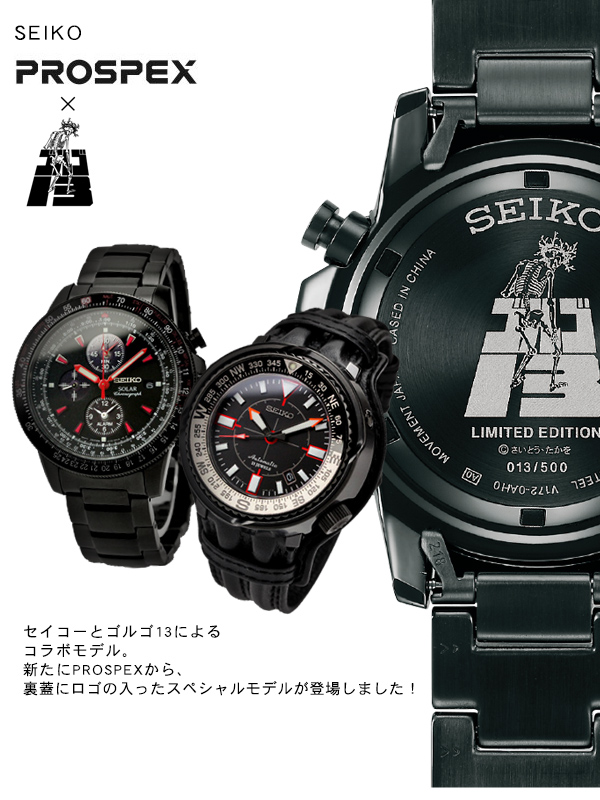 My favorite piece is the Seiko Golgo 13 Sea watch (Ref. SBBN023). This piece is based on one of the Marine Master (Marinemaster) Professional watches in the popular “tuna can” case. The 47mm wide steel case is black IP coated and water resistant to 300 meters. It is rated as a pro use saturation diver. All Seiko fans will recognize this design. The watch dial has red accents to look like gunsight crosshairs. Inside the watch is a Seiko quartz caliber 7C46 movement with a day/date function and a five year battery life. Everyone needs one of these Marine Masters in their collection. The Seiko Golgo 13 Sea watch is limited to 500 pieces and is priced at 126,000 Yen, making it the most expensive of all the limited edition Golgo 13 timepieces. 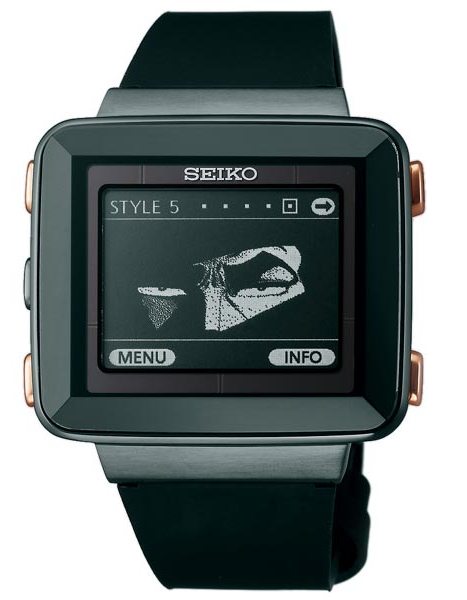 The next and least expensive of all the Golgo 13 Seiko watches is the Golgo 13 Air watch (Ref. SBDL011). Seiko also sometimes calls it the Golgo 13 Sky. This is based on popular Seiko pilot watches and again is done in black and red. The case is 43mm wide and has a rotating slide-rule bezel. On the metal bracelet, this is one of the most handsome version of the standard quartz Seiko pilot watch. Inside is the solar powered Seiko quartz caliber V172 movement. It has the time, date, chronograph, and alarm. The Seiko Golgo 13 Air watch will be limited to 500 pieces and price is 63,000 Yen. 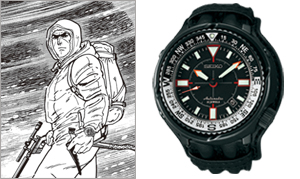 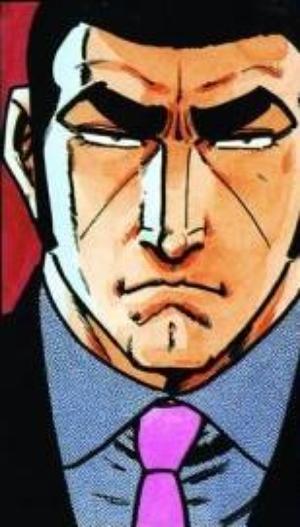 The last model is mechanical and one of Seiko’s famous Land Master (Landmaster) watches. These are rather rare, but cool watches that Seiko collectors like. This particular Golgo 13 model is actually based on the Fieldmaster watch line. The Seiko Golgo 13 Land watch (Ref. SBDC021) comes complete with a bund-style leather strap and rotating compass bezel. If you want to be like Duke, then wear it in the snow. Seiko even Scotchguards the strap for extra durability. The Golgo 13 Land watch comes in a case that is very similar to the Sea’s Marine Master case. They are both 47mm wide, but the Land is almost 1mm thinner and is water resistant to 200 versus 300 meters for the Sea. Inside the watch is Seiko’s 6R15 automatic mechanical movement. Like the Sea, the dial of the Land has been made to have a thematic crosshair in it. The Seiko Golgo 13 Land watch is limited to 400 pieces and is priced at 115,500 Yen. Interesting that the quartz Sea model is a bit more expensive.

All of the Seiko Golgo 13 watches will only be officially available in Japan. As always, Seiko isn’t too sure what the rest of the world will think of its special Japanese culture timepieces. For those outside of Mr. Togo’s homeland, you can more than likely score these timepieces online. For more information you can see Seiko’s official page here (in Japanese).