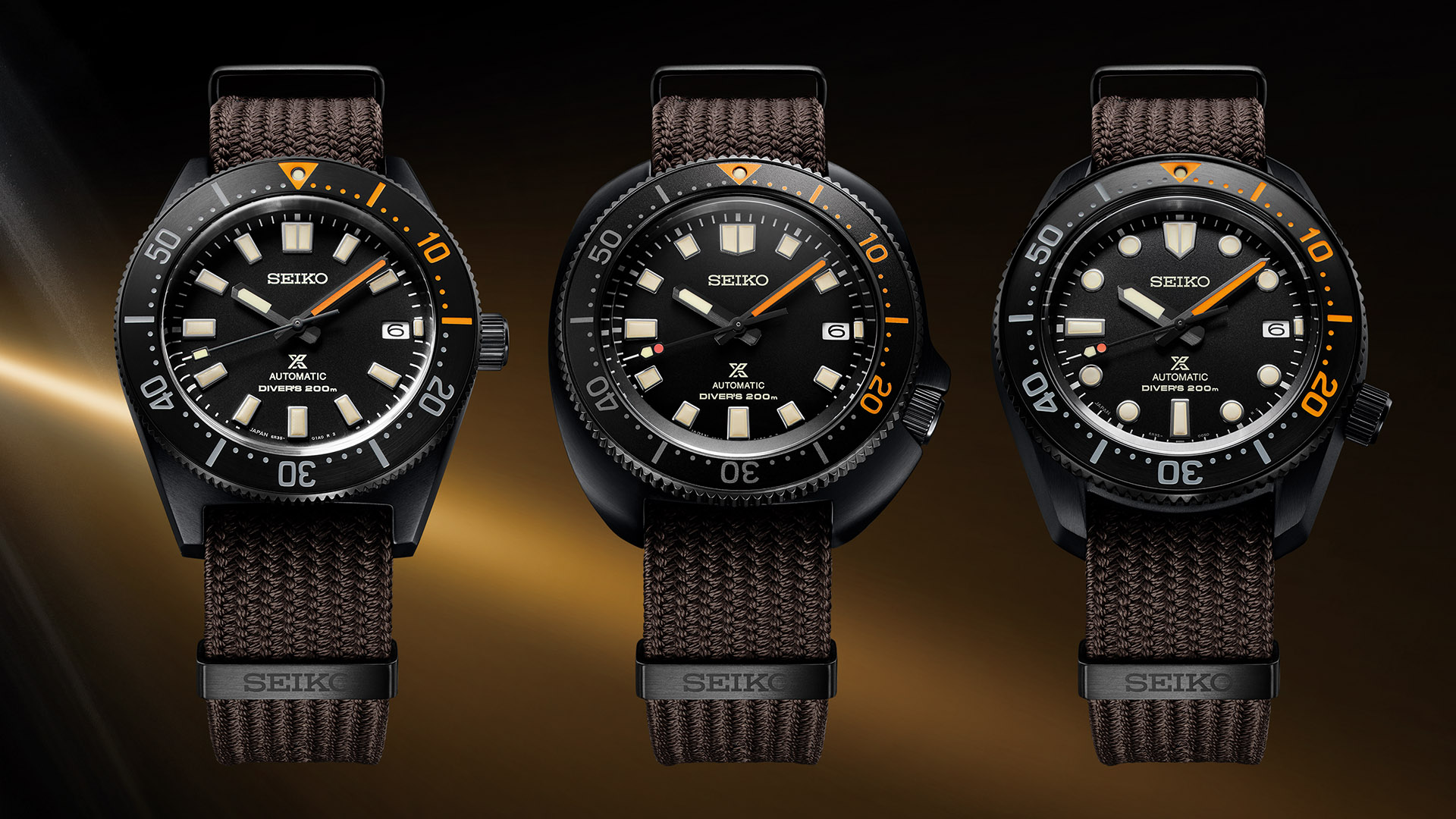 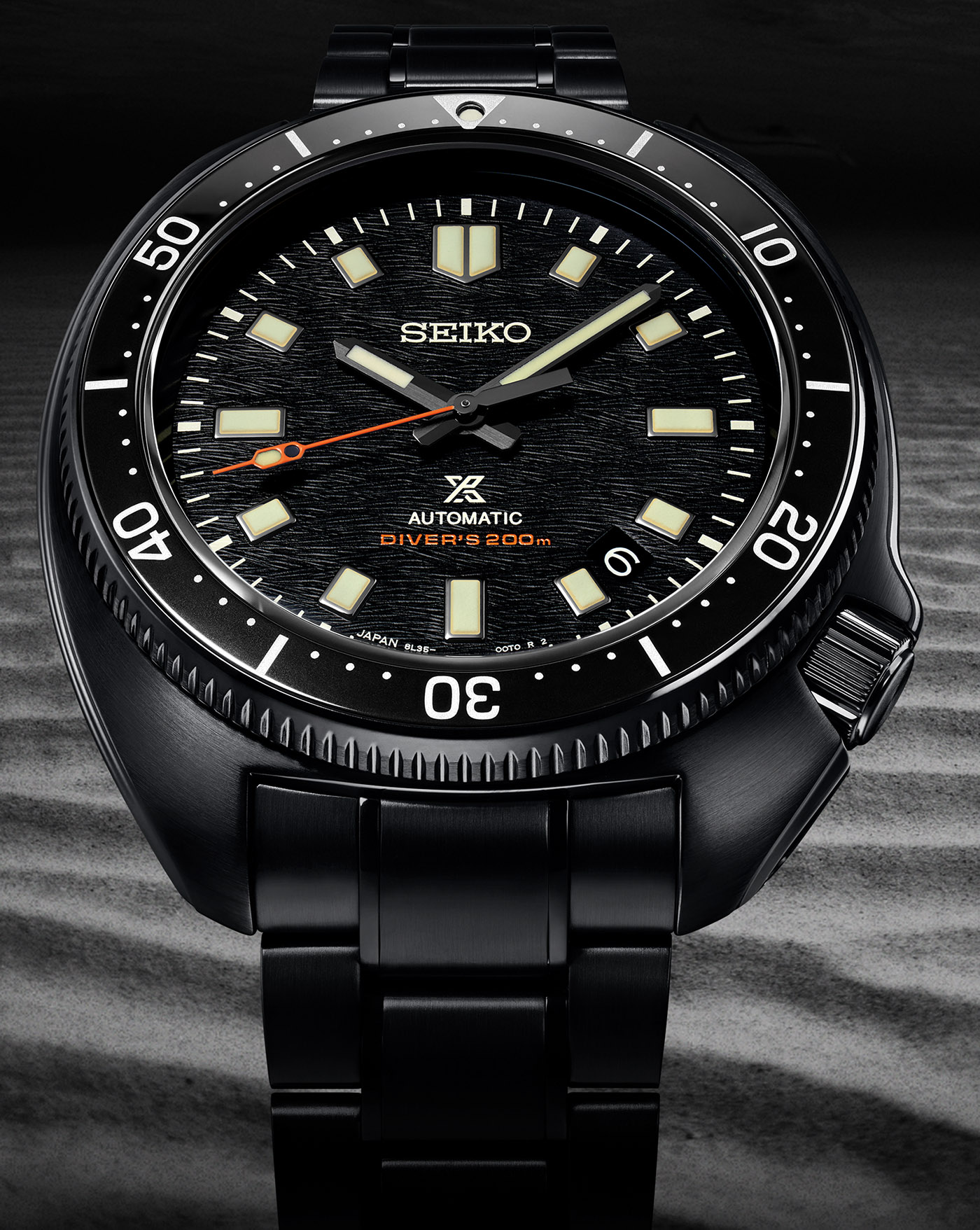 Although black-cased divers are a staple of the modern sports watch landscape, few brands have committed to the style as heavily as Seiko. The Japanese brand’s recent history is riddled with blacked-out takes on its more affordable divers, from a wide selection of Seiko 5 Sports models, to limited edition takes on fan favorites such as the “Turtle” series. Rarely, however, do the brand’s black divers cross the $1,000 price threshold. Seiko aims to change this with its latest release, featuring a quartet of limited edition releases based on existing diver designs with a more premium feel. The new Seiko Prospex The Black Series, including the Seiko Prospex SPB253J1, the Seiko Prospex SPB255J1, the Seiko Prospex SPB257J1, and the Seiko Prospex SLA061J1, reimagines four of the brand’s most popular vintage-inspired diver designs with a high-impact black and orange colorway meant to evoke the mystery and adventure of night diving. 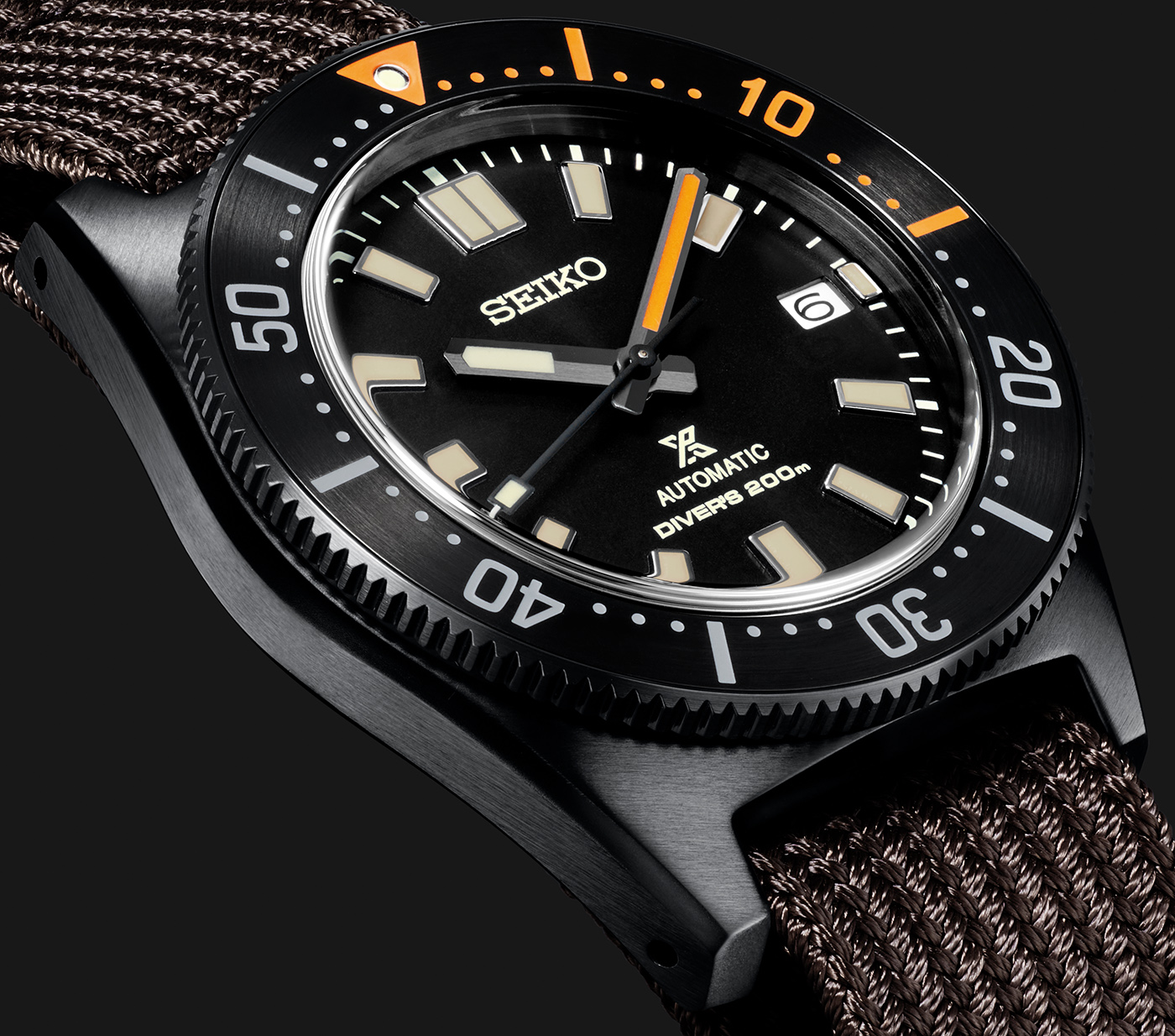 Fans of the brand should have no trouble recognizing all four stainless steel cases in the Seiko Prospex The Black Series. The SPB253J1 builds on the 40.5mm 1965 Mechanical Diver’s Modern Re-Interpretation platform, with its clean, squared-off skin diver-style lugs and broad, radially brushed bezel insert. For the SPB255J1, the brand turns instead to the sharply beveled 42mm form of the 1968 Mechanical Diver’s Modern Re-Interpretation, with its angular Grammar of Design-style lugs and case sides flanked by an unguarded 4 o’clock screwdown crown. The broad, instantly recognizable 42.7mm rounded cushion case of the 1970 Mechanical Diver’s Modern Re-Interpretation forms the basis for the SPB257J1, which adds the brand’s proprietary super-hard black coating to the familiar asymmetrical 4 o’clock crown guard and pebble-like profile. Seiko also uses this classic rounded “Willard” case design as a jumping-off point for the SLA061J1, but here the brand takes a more luxe approach in images with a polished bezel insert and more ‘70s-accurate 44mm case proportions. The brand also keeps the signature bowl-like polished case sides of the “Willard” series intact here, which should create an almost mirror-like black surface on the wrist. For the three SPB models in The Black Series however, Seiko keeps the brushed surfaces of the original models intact, but replaces any polishing with a purposeful matte finish in initial images. The three SPB models in the series also take similar approaches to their dive bezels, with full Seiko-style diving scales split between pale gray and a high-visibility signal orange in images. For the SLA061J1, Seiko instead uses a more restrained, luxurious full diving scale in white. All four models offer an ISO-approved 200 meters of water resistance. In addition, each model in the line sports an anti-reflective sapphire crystal for a more upscale feel than Seiko’s typical Hardlex mineral glass. 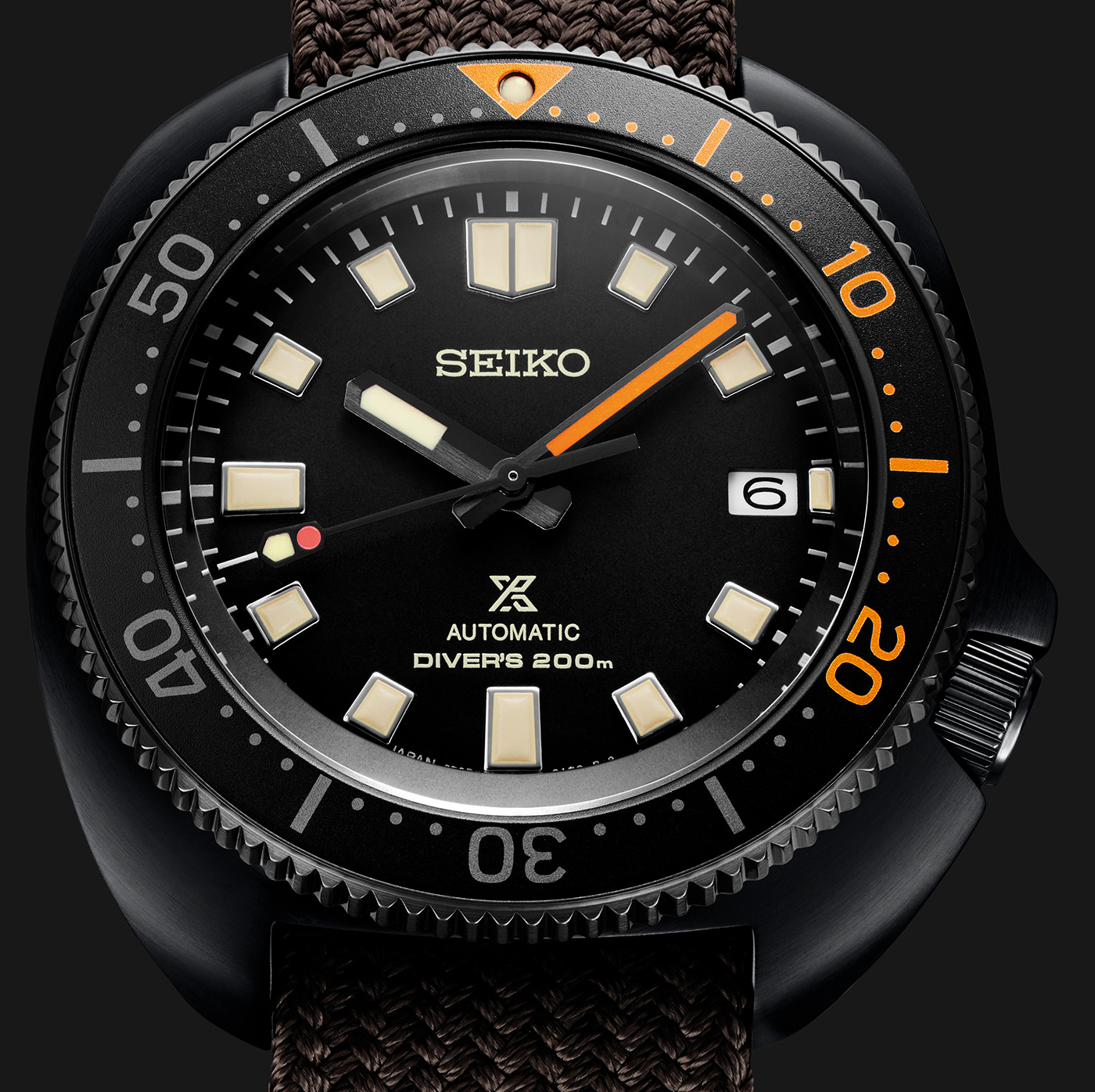 As with the cases, the dials of the Seiko Prospex The Black Series closely follow their regular production counterparts but add striking new colorways. The SPB253J1, SPB255J1, and SPB257J1 all maintain their regular production rectangular, rounded, and square applied dive indices, respectively, along with their broad pointed baton handsets. Where these three models diverge from their mass production stablemates is with their use of color. Each of the trio begins with a deep black dial surface, forming a clean visual base to build upon. The majority of the lume fills are rendered in a light fauxtina tan, and the hands themselves are finished in a stealthy brushed black. The minutes hands of these models are the real stars of the show, however, with a dramatic dive-ready orange lume fill that immediately draws the eye toward these crucial elements at a glance. While Seiko’s previous black and orange diver designs have used orange painted hands for contrast, this unique mismatched lume approach allows for a more cohesive, balanced appearance in photos without losing any of the visual impact an orange hand brings. Given the thoughtful, holistic aesthetic choices behind the dials of the SPB253J1, SPB255J1, and SPB257J1, it’s somewhat disappointing to see all three models resort to mismatched 3 o’clock date windows in bright optic white. 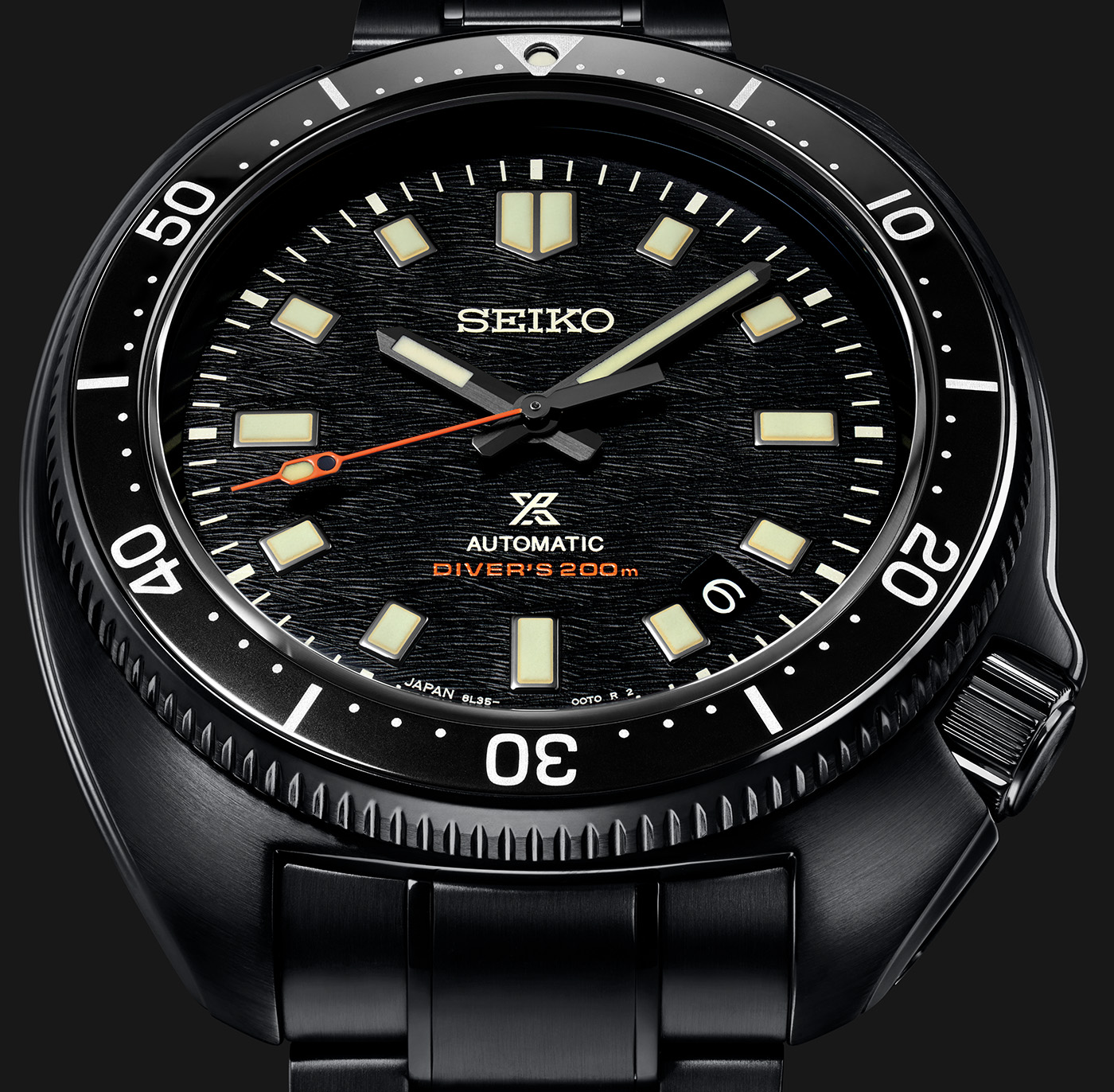 The Seiko Prospex SLA061J1 follows up its more upscale case finishing with an equally refined dial treatment, leaning heavily upon its talent for dial textures. The deep black dial’s gently rippling crosshatch texture is inspired by the ridged patterns of sand on the seafloor, and gives the simple diver layout a more complex and layered character in initial images. The rest of the dial takes a similar but more restrained approach to the other entries in the series, with a matching pale fauxtina lume fill, applied square indices, and brushed black pointed baton hands. Seiko confines the use of its bold orange accents to the distinctive “stoplight” seconds hand and the “Diver’s 200M” text at 6 o’clock, lending this model a stealthier, tastefully restrained look in initial images. In contrast to the SPB models in the line, the SLA061J1’s 4:30 date window uses a dial-matching black wheel, allowing this useful element to neatly fade into the visual background. 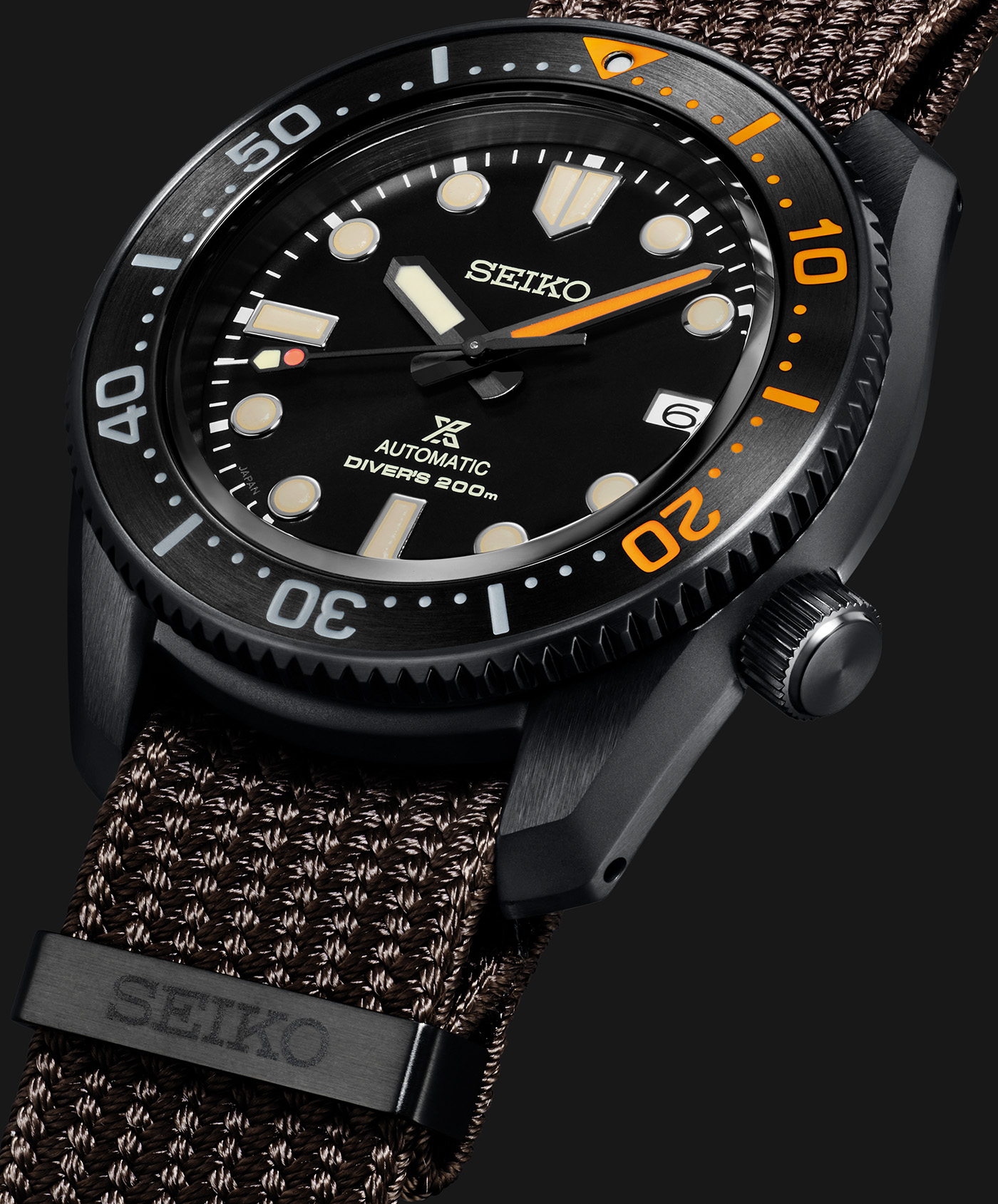 Seiko powers each model in the Prospex The Black Series with an in-house automatic movement. For the SPB253J1, the SPB255J1, and the SPB257J1, the brand uses the capable 6R35 movement. Sitting at the midrange of the brand’s movement lineup, the 6R35 offers a robust 70 hours of power reserve at a 21,600 bph beat rate, along with a (conservatively) stated accuracy of -15/+25 seconds per day. For the higher-end SLA061J1, Seiko instead turns to its 8L35 automatic movement. Assembled in the brand’s exclusive Shizukuishi Watch Studio in northern Japan alongside movements for Grand Seiko, the 8L35 offers a smoother 28,800 bph beat rate, but a smaller 50 hour power reserve. Seiko’s claimed accuracy for the 8L35 is a cut above its more affordable stablemate, however, with a rating of -10/+15 seconds per day. Seiko completes the SPB253J1, SPB255J1, and SPB257J1 with deep cocoa brown NATO straps using the traditional Japanese Seichu braiding pattern. For the SLA061J1, Seiko instead uses a fully black-coated three-link bracelet in stainless steel. 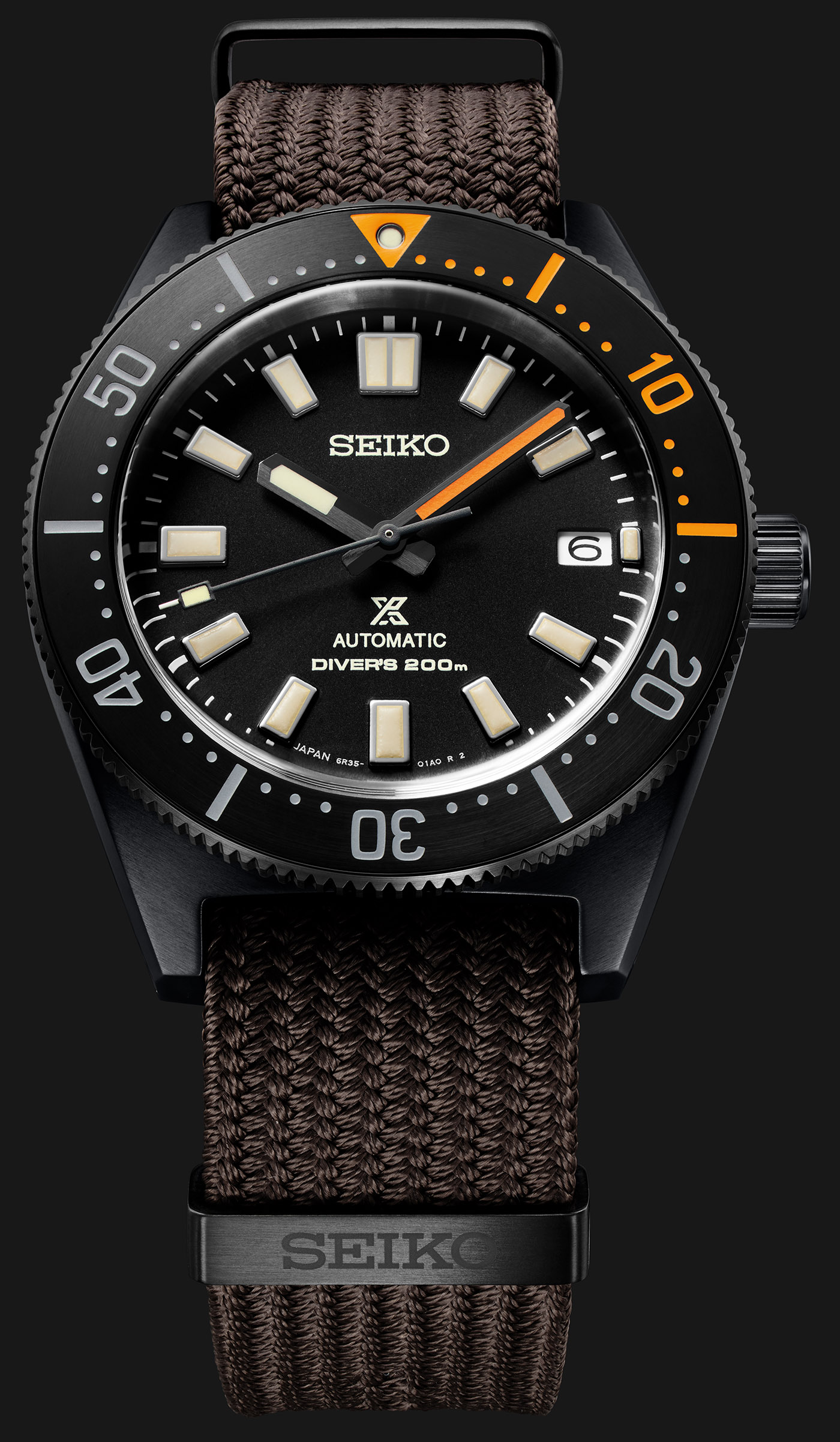