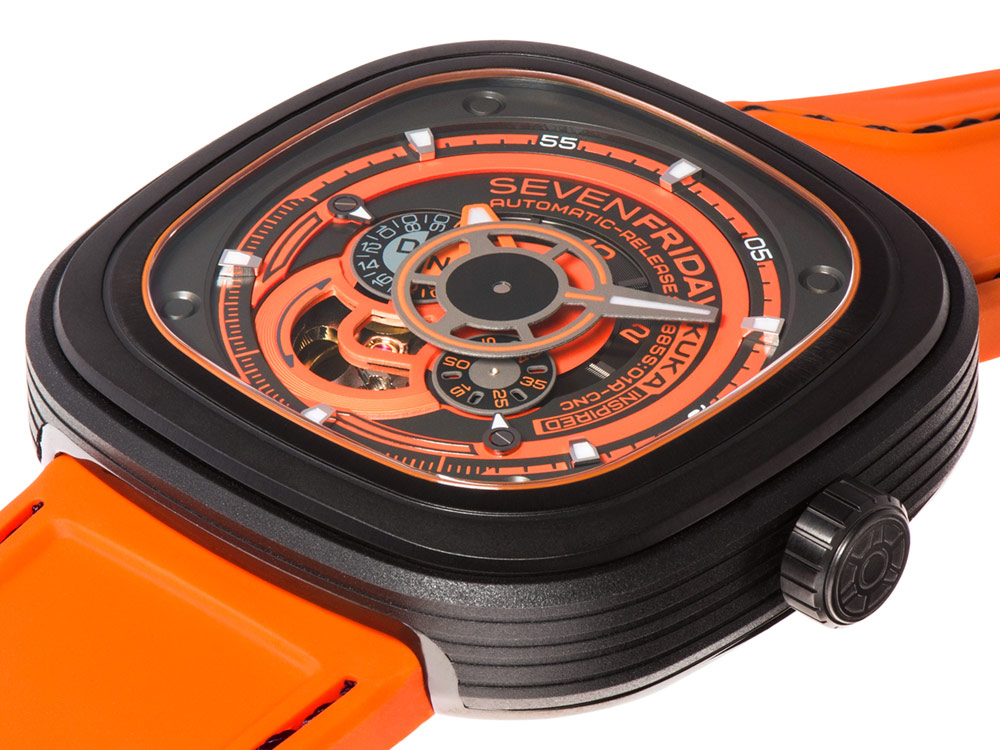 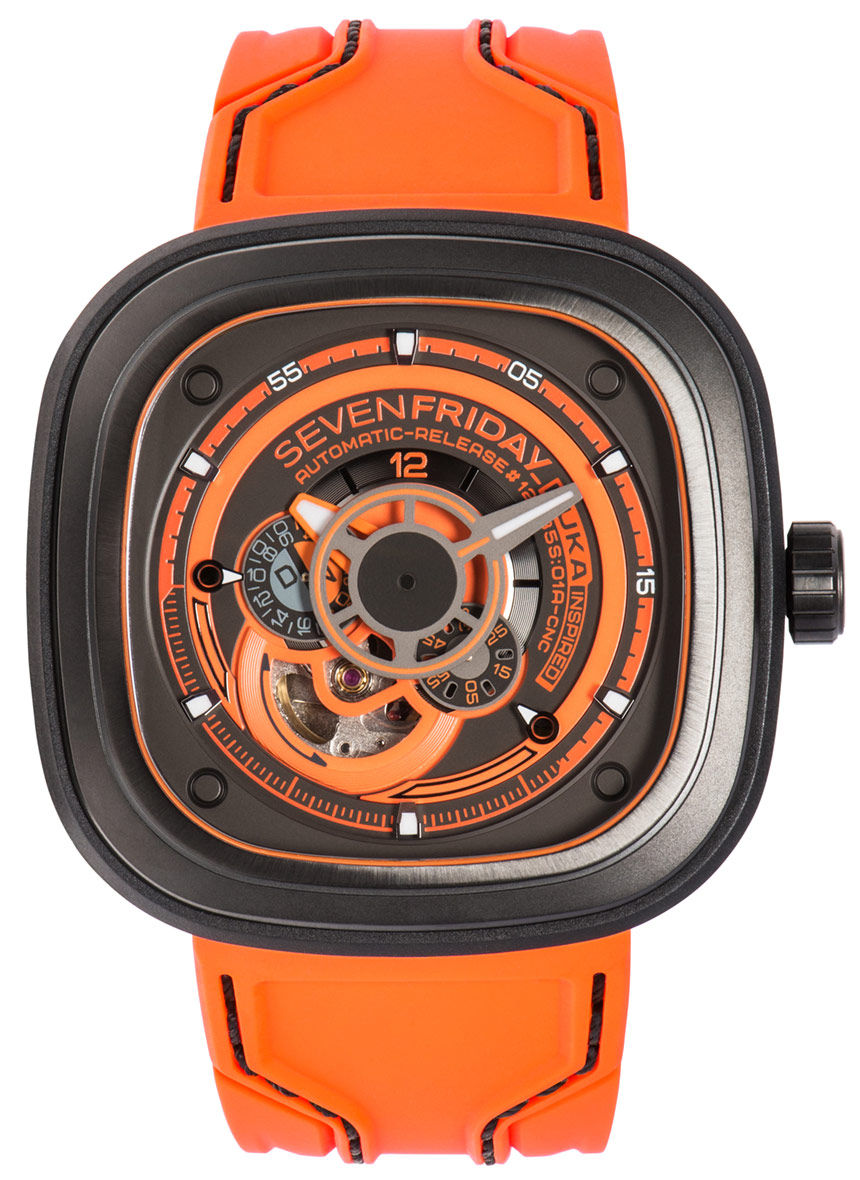 Few watchmaking companies in recent years have been as successful or as controversial as SevenFriday. Since their founding in 2012, the avant-garde indie brand have created a cult following with their “industrial revolution” style and bold use of colors. SevenFriday first collaborated with the automation and robotics company KUKA AG back in 2013 for the “P01/03 Automatic Orange Black” model, inspired by KUKA AG’s robotic arms and making liberal use of their signature industrial orange color. This was followed with the “P3/04 KUKA” edition in 2016, which toned down the orange highlights and featured a predominantly black and gun metal grey case for a stealthier look. Both editions were highly successful for the brand, who have now announced the third installment in their KUKA-inspired collection, the aptly named SevenFriday P3/07 KUKA III. 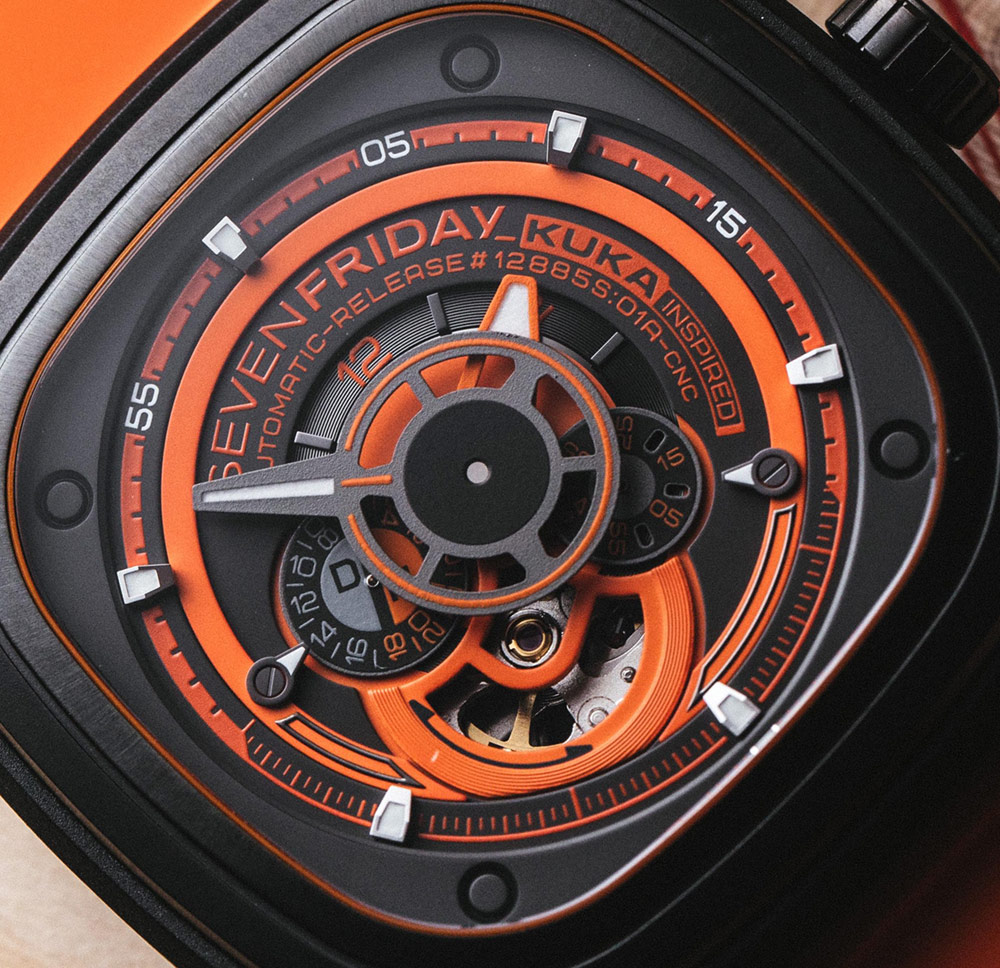 Reading the time on most SevenFriday watches can be challenging initially until you adjust to the unusual dial layout and the brand’s propensity for using discs rather than hands. On the KUKA III model, you have a short orange hour hand filled with Super-LumiNova and a longer minute hand in gun metal grey with a Super-LumiNova-filled tip affixed to a central disc decorated with a matte orange ring design. At about half past 4 o’clock on the dial is the small seconds wheel, with every 5-second increment denoted in orange numerals and every 10 second increment marked with a hole punch. At 9 o’clock is the 24-hour disc with day-night indicator, which oddly shows “day” in gun metal grey and “night” in bright orange. This seems somewhat counterintuitive, but the printed “D” and “N” indicators on the disc should help clear up any confusion.

The color scheme on the SevenFriday P3/07 KUKA III strikes a middle ground between its predecessors, making a bolder use of orange than the P3/04 but showing more restraint than the original P01/03. The KUKA III is easily the most legible of the three due to its use of contrasting white minute indicators along the inner bezel, along with white pointers for the small seconds and 24-hour discs. The outer black silicone “animation ring,” as the brand calls it, is grooved in a manner evocative of the gripper extensions on a KUKA robotic arm. This theme is further reinforced with the black contrast stitching in an almost circuit-like pattern on the included orange silicone strap, lending the whole watch a strongly robotics-themed aesthetic. 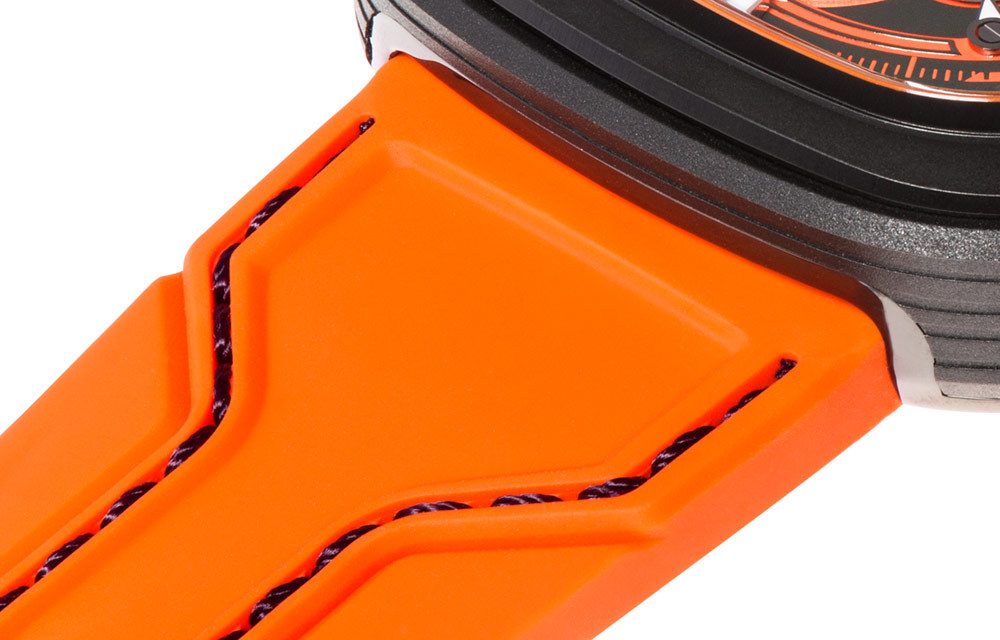 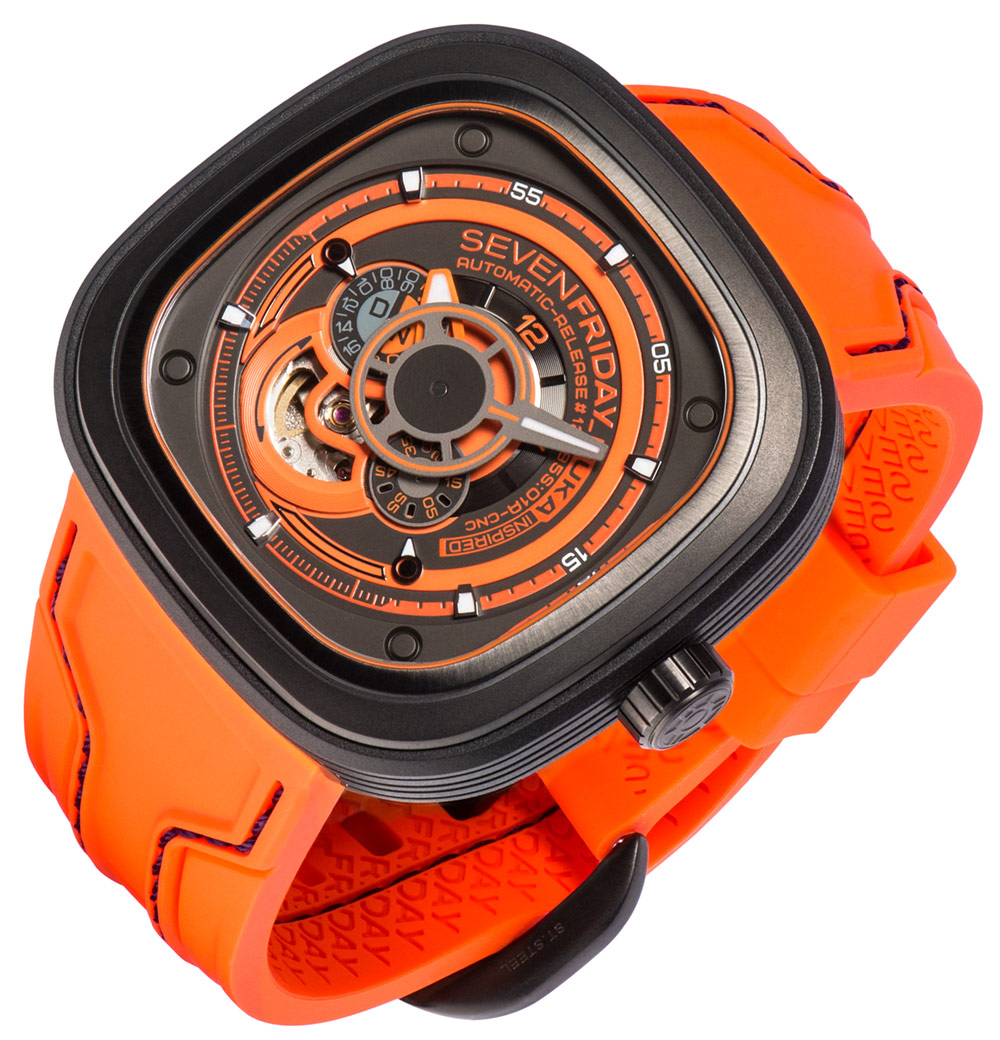 Through a cut-out near 7 o’clock on the dial, the open balance wheel of the Miyota 82S7 movement can be observed beating away, at the somewhat leisurely frequency of 3Hz. This is a workhorse Japanese automatic movement with a uni-directional rotor, 40-hour power reserve, and manual winding capability, but it notably lacks hacking seconds so precise time-setting could be difficult. That being said, extreme accuracy is not the point nor is it really this movement’s forte, but it should prove both reliable and inexpensive to service. SevenFriday’s main strength as a brand has always been their bold and youthful design language, rather than cutting edge movement technology, and in that context, the Miyota 82S7 is a fitting engine to keep costs down without compromising on visual appeal. 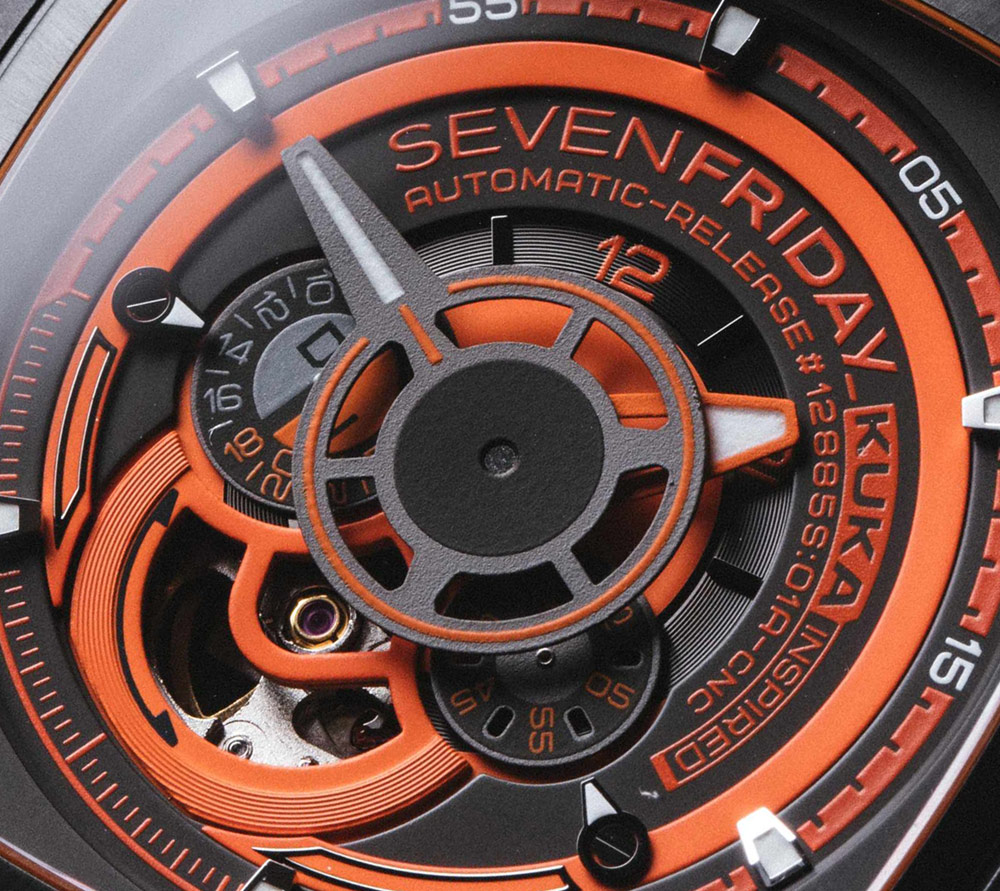 The SevenFriday P3/07 KUKA III features a 47mm square case with rounded corners, a shape somewhat reminiscent of a TV-screen for those of us old enough to remember what CRT (Cathode Ray Tube) televisions looked like. The case and bezel are made of stainless steel with black PVD coating, and a hardened mineral crystal with anti-reflective coating covers the dial. Turn the watch around and a polished steel caseback with a stylized KUKA insignia is revealed, as well as a map of the globe indicating where the watch was designed and constructed, as well as the origins of the movement used. In an industry filled with clever obfuscation about what’s been made where to avoid consumer bias, SevenFriday’s honesty here is a welcome change. Embedded behind the globe is an NFC (near-field communication) chip which allows owners to verify the watch’s authenticity via the SevenFriday Android app, a modern alternative to the “secret signature” other Swiss brands employ as a means of combating counterfeiters. 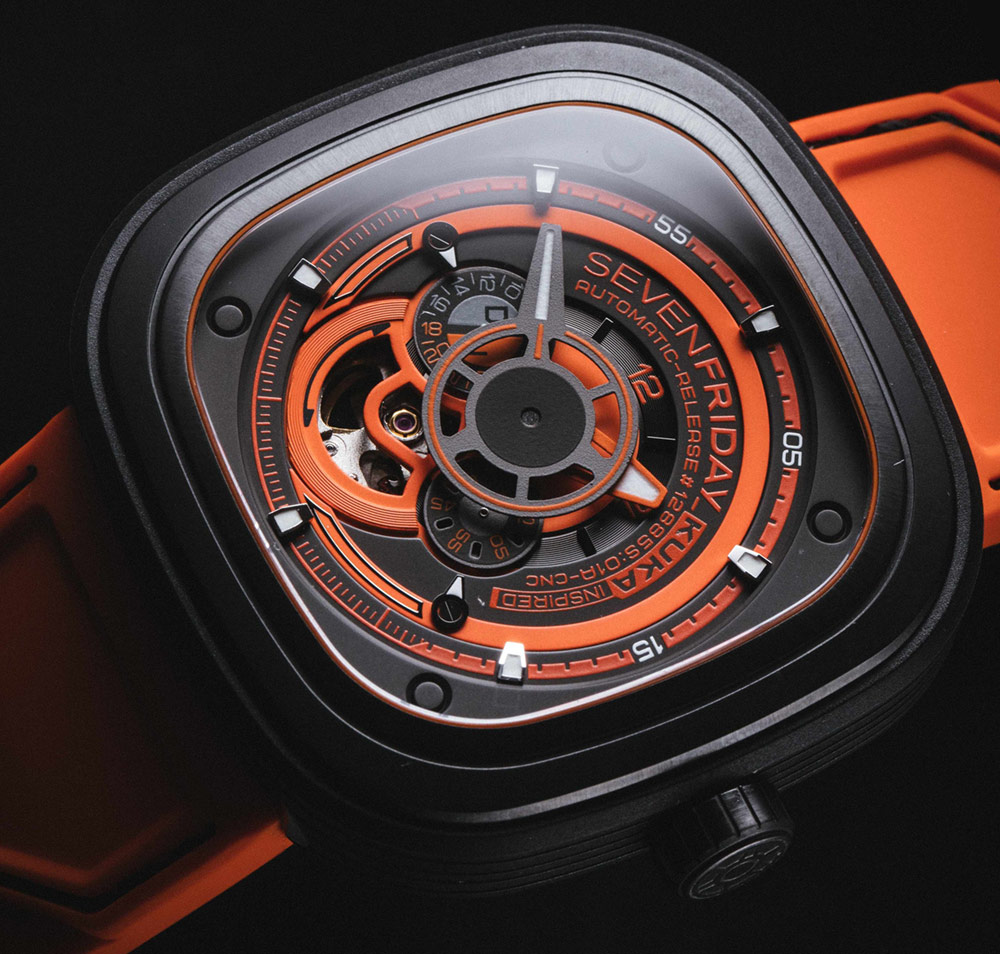 It should be noted that, despite the KUKA III’s possible resemblance to a divers watch, it is only rated to 3 ATM, or 30m, of water-resistance. SevenFriday’s product sheet describes this as “splash/rain resistant” but cautions against trying to swim or dive with the watch. The lugless case design may also cause the watch to move about a fair bit on the wrist, which won’t cause any grief for those who prefer their watches loose but may frustrate wearers who want the dial to remain centered on their wrists. Caveats aside, this is an extremely stylish piece from a company with a devoted following, and as a limited edition of 750 pieces, I don’t expect SevenFriday will have any difficulty selling out fast. The SevenFriday P3/07 KUKA III will be available in limited quantities worldwide beginning October 31 (good Halloween colors), 2017, with a list price of $1,200 USD/CHF. sevenfriday.com