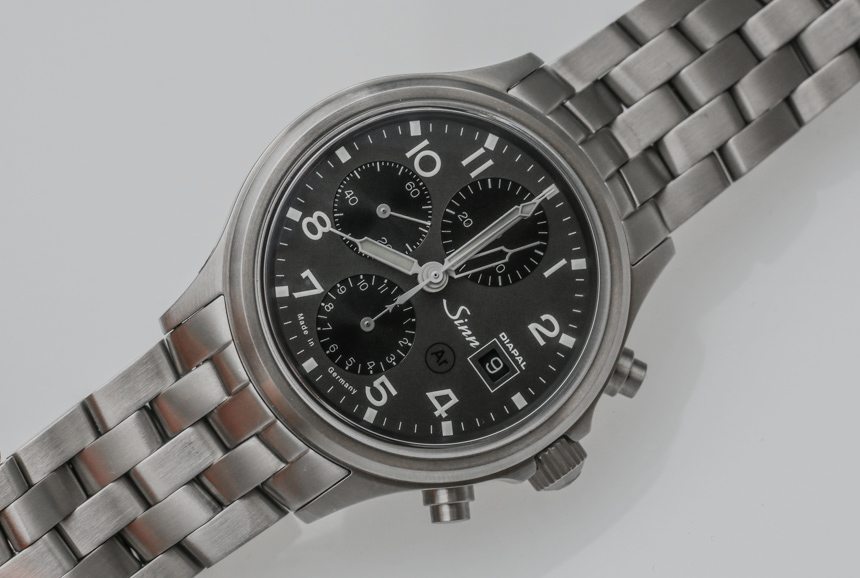 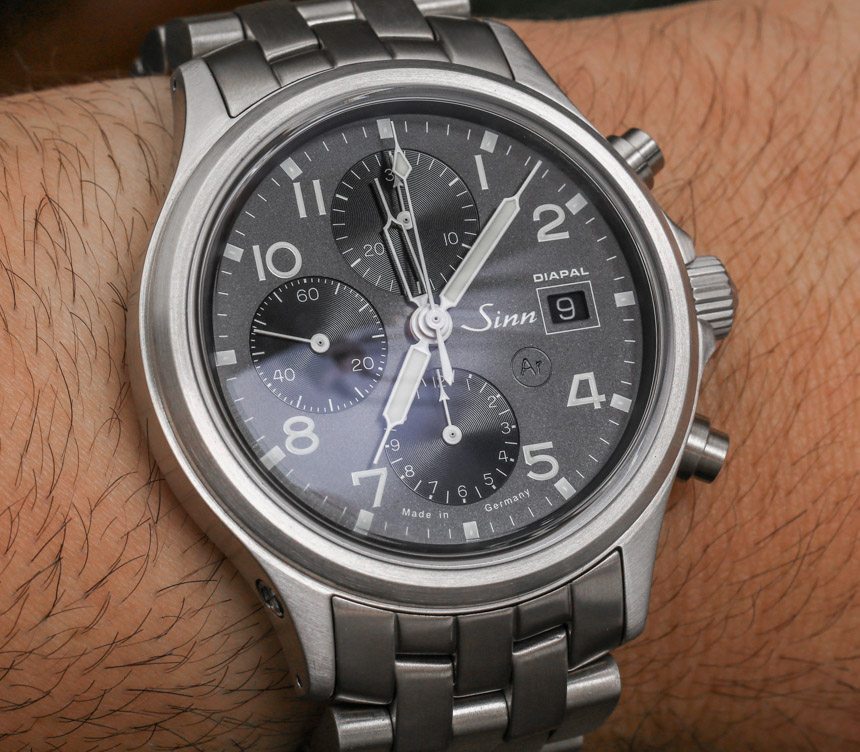 If there were any watch out there that embodies the unfussy tool watch, the Sinn 358 DIAPAL must be near the top of the list – even though the same could be said of a great number of watches from the quintessentially German brand. DIAPAL, by the way, is Sinn’s oil-free escapement system that helps a watch work better for a longer time and is denoted by a gray dial on every Sinn watch that utilizes the system. You can read more about DIAPAL technology here. Back when the Sinn 358 DIAPAL watch came out a few years ago, Ariel expressed enthusiasm about timepieces like this that are “all tool and do not look like they are made to be worn by tools.” That basically says it all. The Sinn 358 DIAPAL is a German pilot’s watch that isn’t flashy but is handsome and gets the job done. 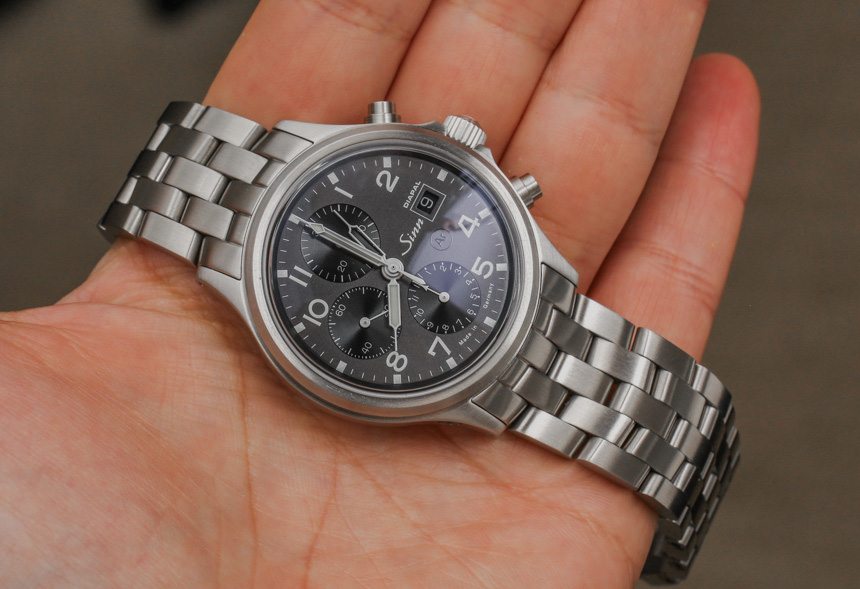 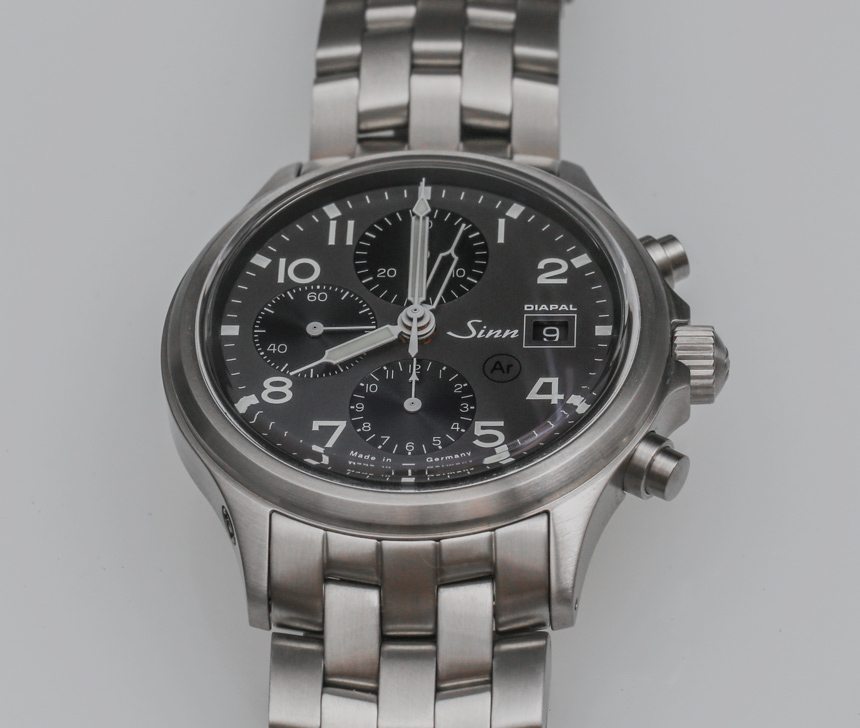 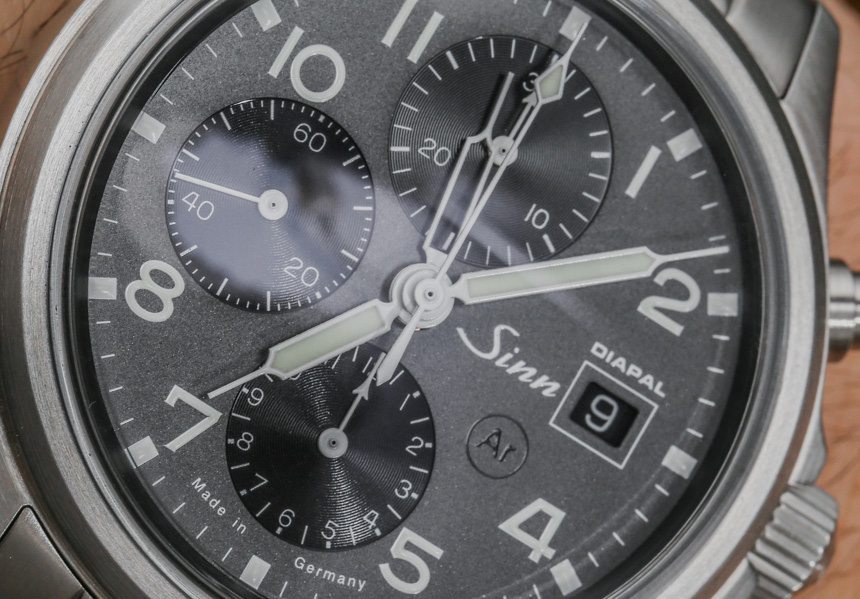 The Sinn 358 DIAPAL watch has a stainless steel case, sapphire crystal on front and back, special dehumidifying technology, 100m of water resistance, a chronograph complication, a second time zone complication, and a date window. Sorry for rattling all that off, but a list of salient features and characteristics seems in line with the to-the-point vibe. I have to say that the skeletonized GMT hand is less legible at times, and it would have been helpful to have a more defined hand. All in all, this watch is legible but definitely doesn’t “pop” in any way, and that’s exactly what I’d assume its buyers want. 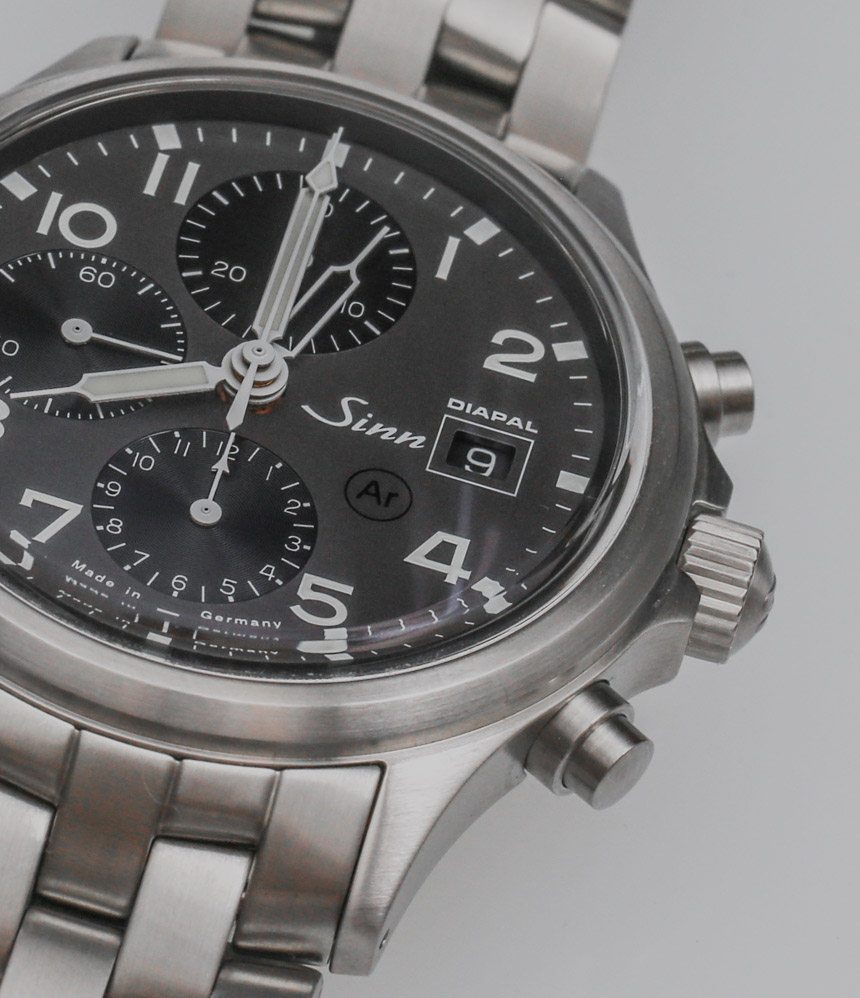 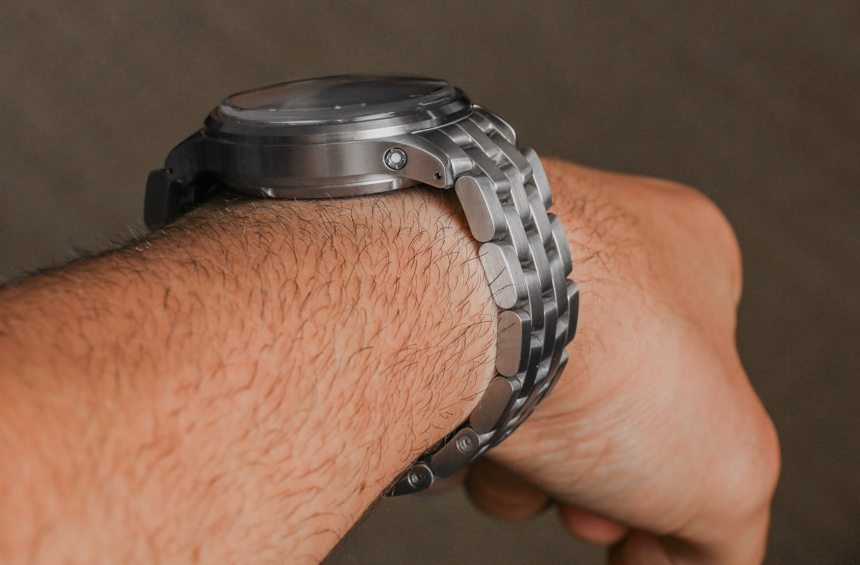 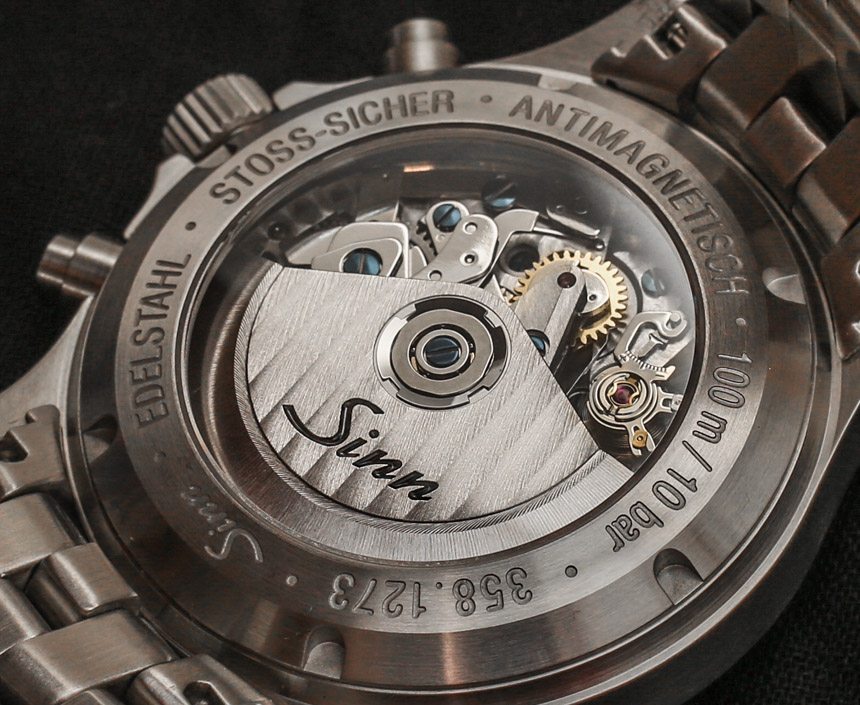 As previously noted, DIAPAL is the name that Sinn has given to its technologies and processes that allow for a lubricant-free anchor escapement. According to Sinn, “the anchor escapement is the most sensitive component of the movement with regard to accuracy,” meaning that the removal of lubricant which can age and affect the anchor escapement has a large impact on the movement’s accuracy. Special materials are chosen that can work together without lubrication and don’t cause friction, and the DIAPAL name comes from the DIAmond PALlets that were used in place of the ruby traditionally used in the escapement. 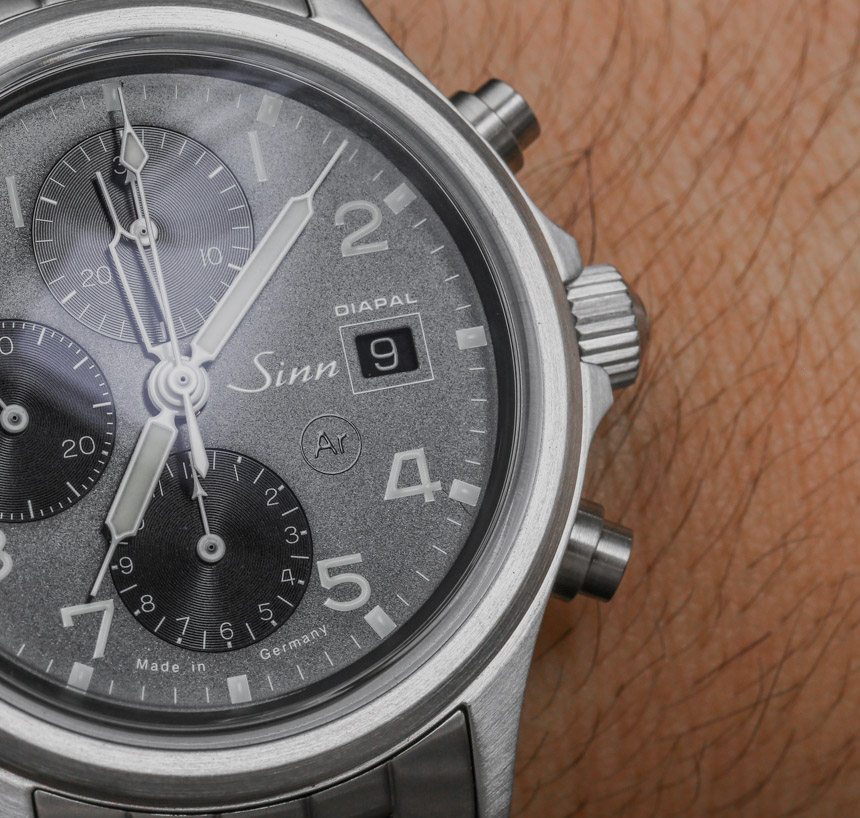 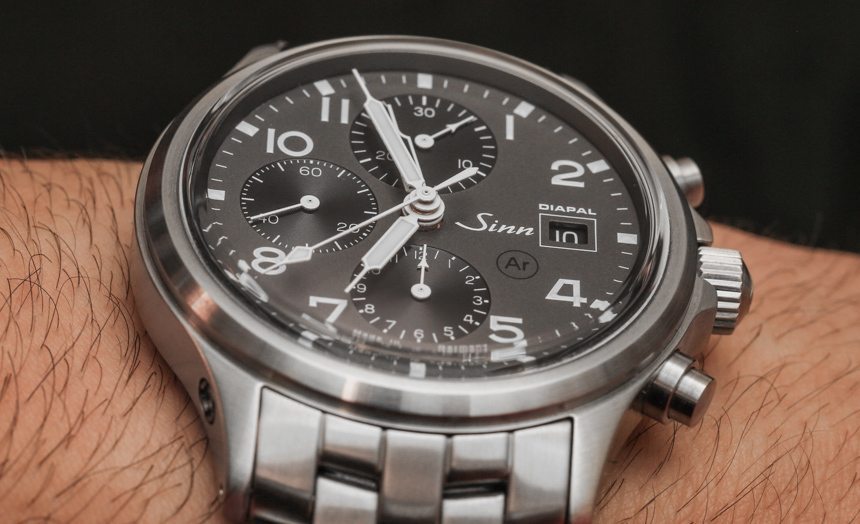 This DIAPAL technology, combined with Sinn’s Ar-Dehumidifying technology, in which the movement is encased in a dry environment filled with protective gas in order to delay the aging of oil used in the watch, adds much to the accuracy of the Sinn 358 DIAPAL. The movement being protected is a 25-jewel Valjoux 7750 with the addition of the second time zone hand, as well as anti-magnetic and shock-resistant technology. 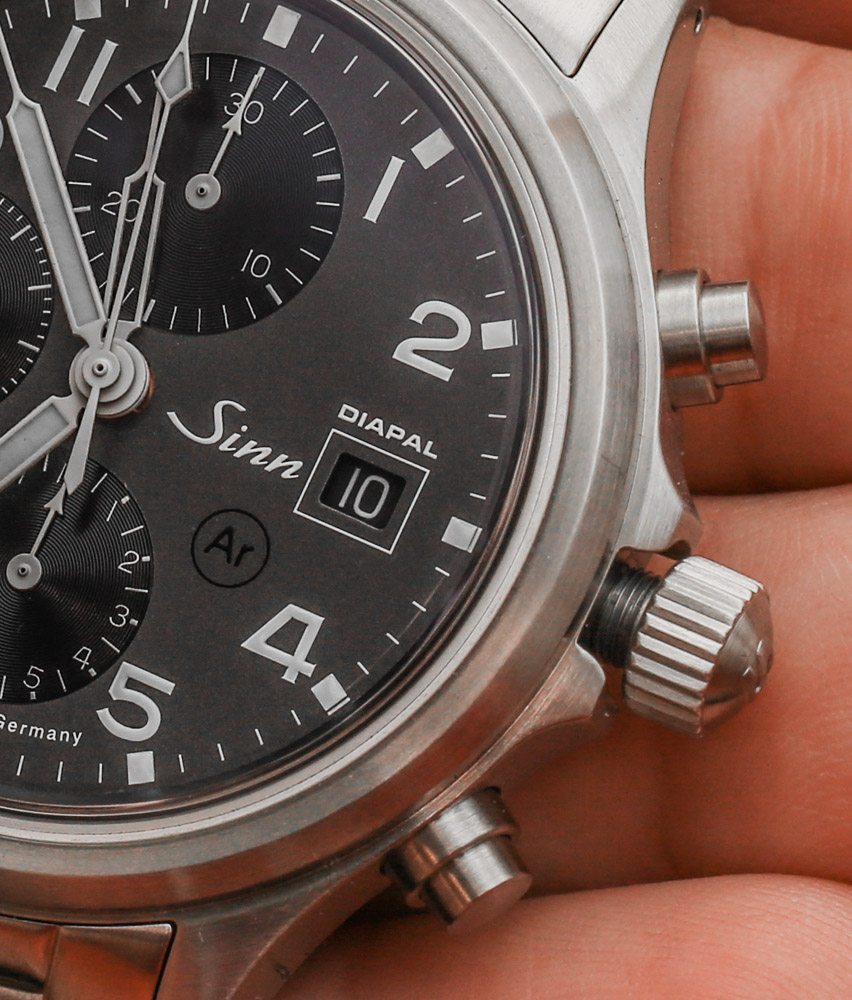 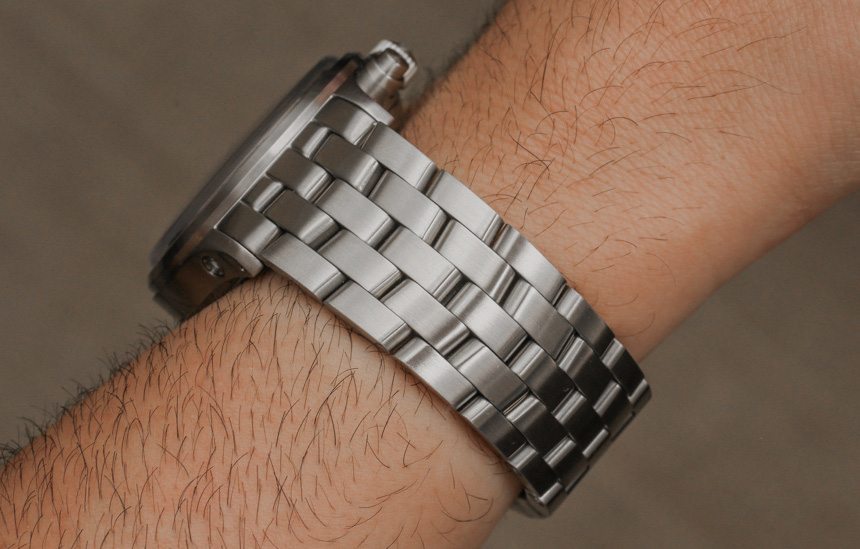 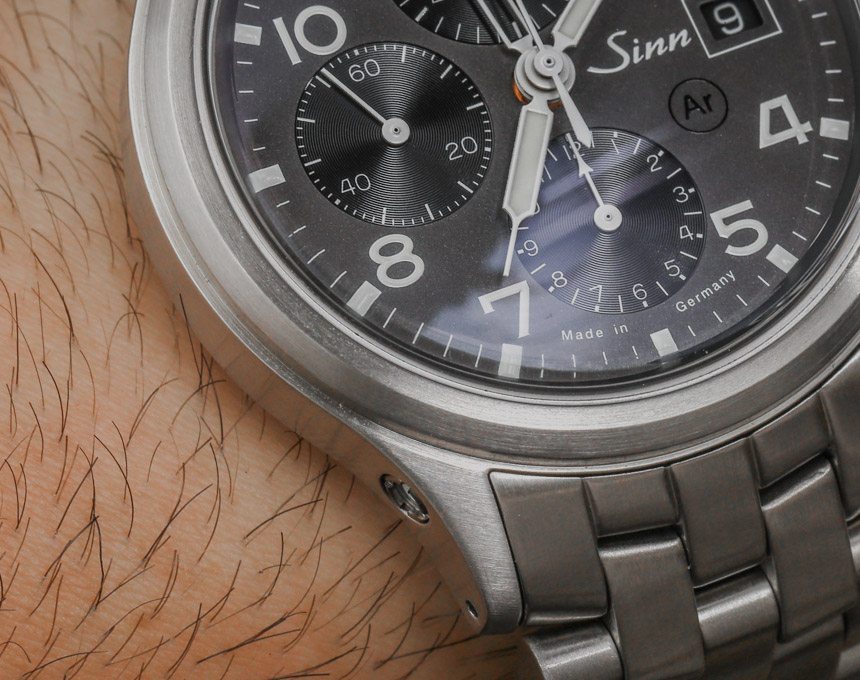 The brushed stainless steel case is well-sized at 42mm wide and 15mm thick. This sizing gives enough room for the wearer to fully appreciate all that is going on with the dial, and I must say that Sinn has done an excellent job of providing a clear and legible layout. On the charcoal grey electroplated dial are applied hour indices in white, coated in luminescent paint. Removed are the three, six, nine, and twelve o’clock markers as they would be covered by either sub-dials or the date window. The symmetry of this design choice gives insight into the thought that went into the dial’s design. Also coated in the luminescent paint are the hour, minute, and chronograph seconds hand, and it is easy enough to tell the time in low light. 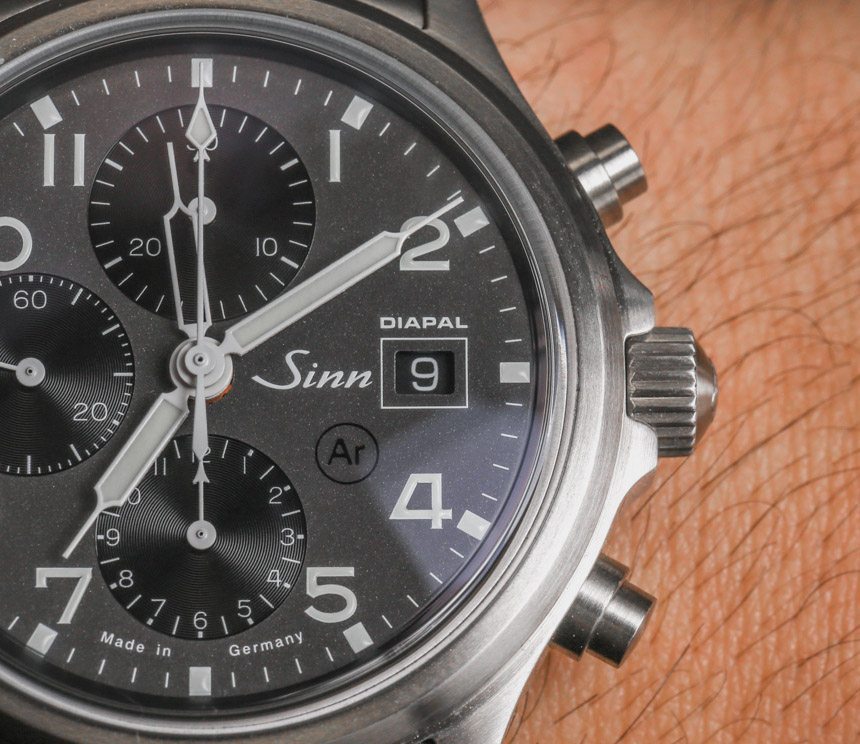 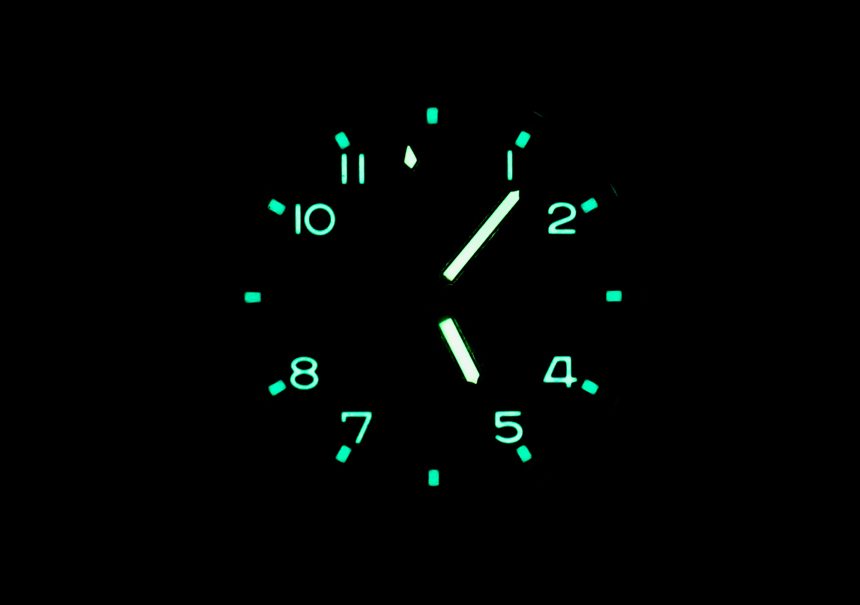 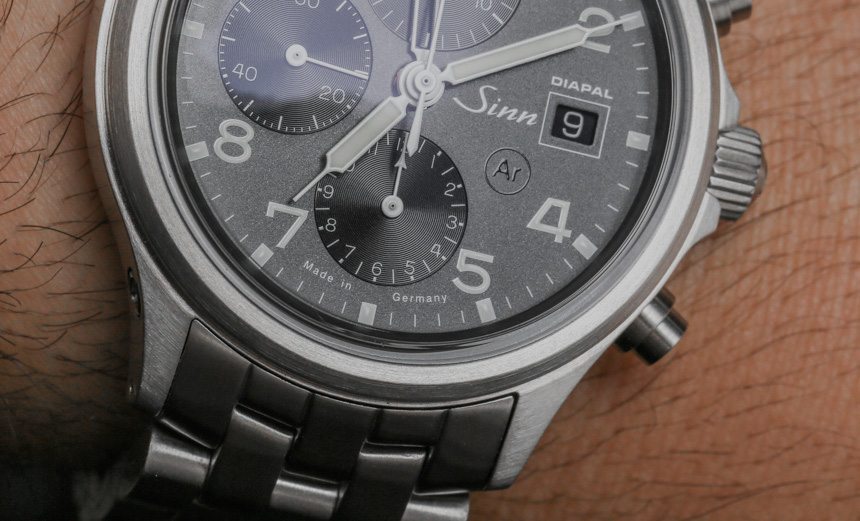 The dial is viewed through a highly domed sapphire crystal, and on the reverse of the case a flat sapphire crystal allows for viewing of the movement. Both sides have an anti-reflective coating. It’s also worth noting that the lume is bright and highly legible. A very traditional set of crown and chronograph pushers are consistent with the overall no-nonsense theme of the Sinn 358 DIAPAL watch. The screw-down crown that helps assure the watch’s 100m of water resistance is where one can adjust the time, date, and hand for the second time zone which operates on a 12-hour basis. 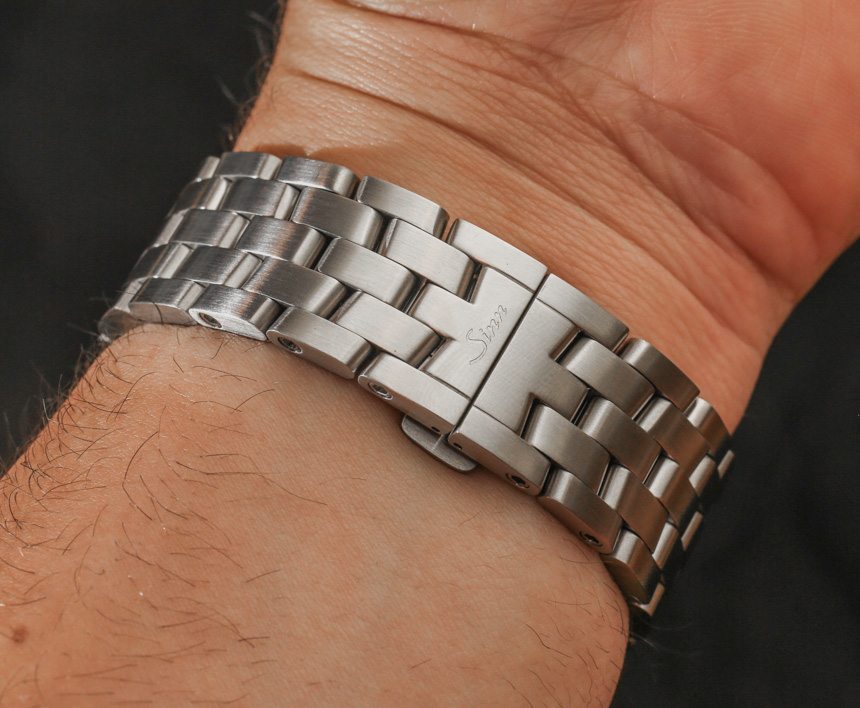 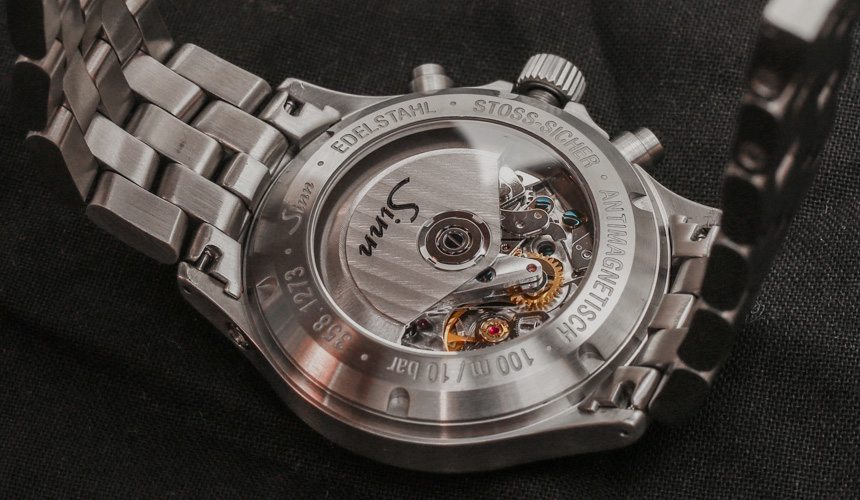 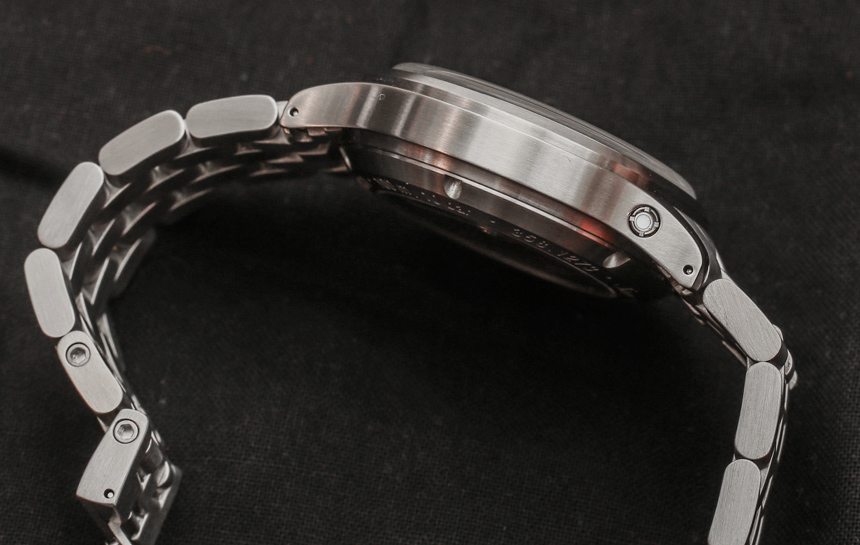 The 22mm bracelet is well-constructed and solid, as you would expect given the rest of the features of the watch, and it comes in the same brushed stainless steel as the case. There is also an option of a black leather strap, which I think looks much nicer and gives the watch a completely different feel. The stainless steel makes the Sinn 358 DIAPAL too much of a tool watch, while the leather strap, which matches the sub-dials nicely and gives the whole package a bit more fragility but also style, adds the flair that a watch like this needs. 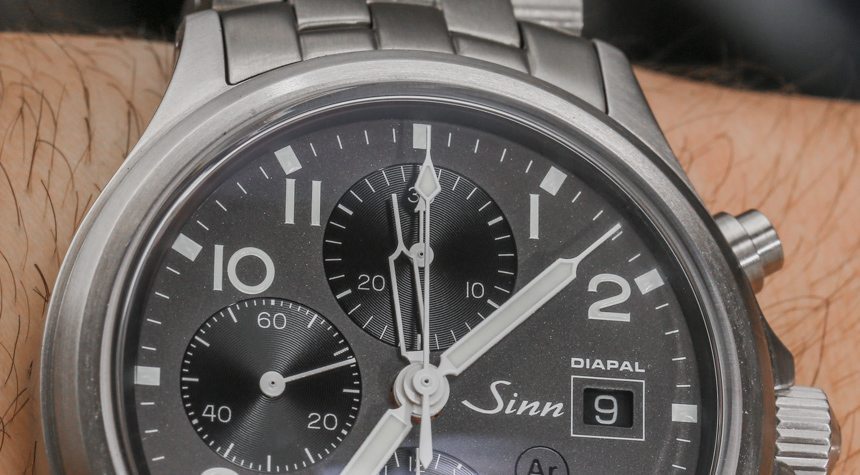 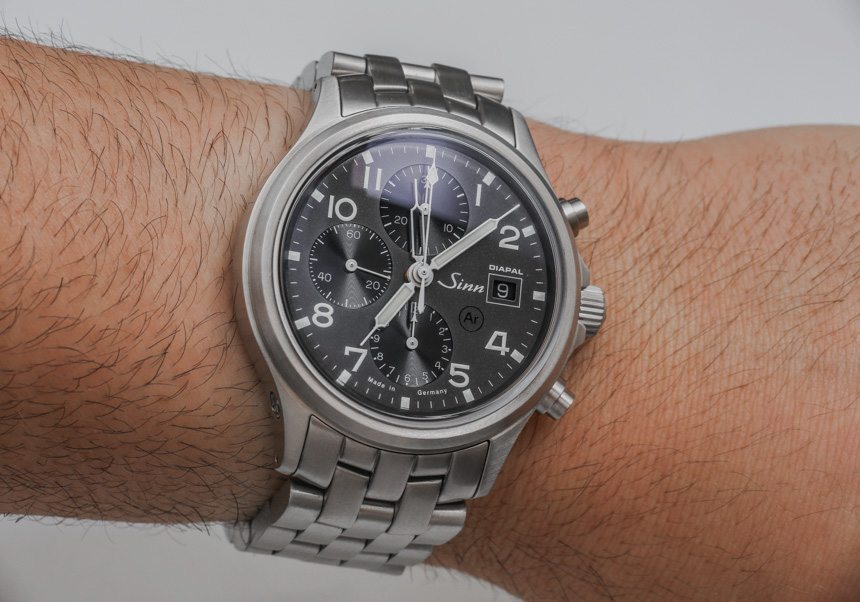 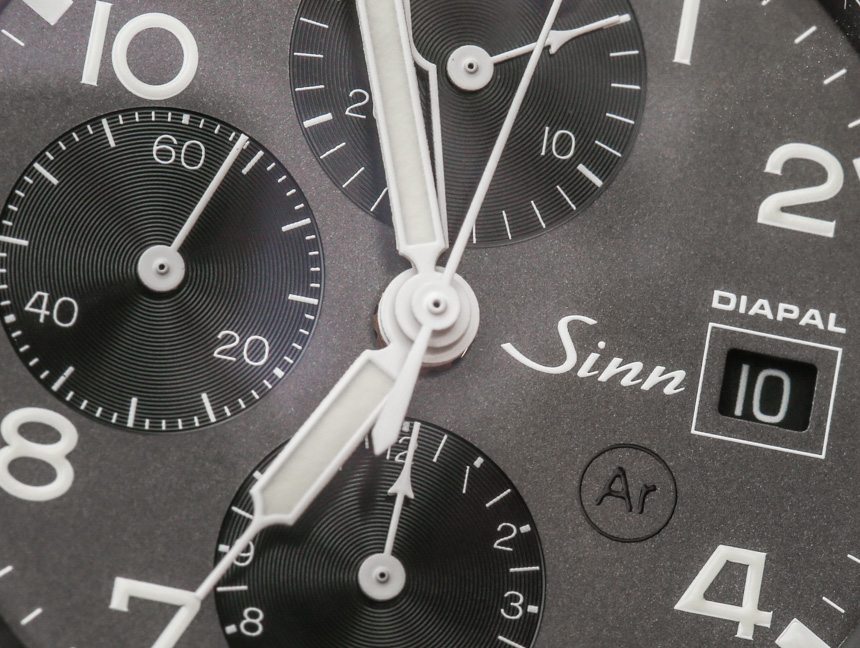 On the leather strap, I do think the look of the Sinn 358 DIAPAL is “softened,” and that may or may not detract from the overall package, depending on your preferences. The Sinn 358 DIAPAL is a very solid everyday wear, has a German sensibility and solid construction, and stands up to anything that comes from Switzerland. That’s we’ve noted before when discussing this relatively well-known German brand, but it merit reiterating. Price for the Sinn 358 DIAPAL is $3,980 on the steel bracelet. sinn.de