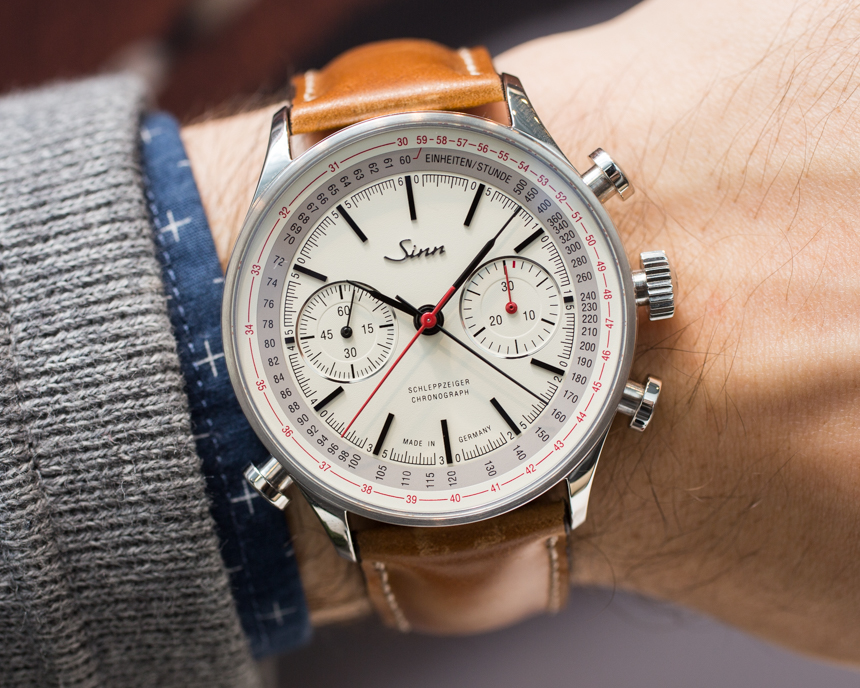 While we may all feel like we know Sinn and have a handle on their general flavor, Baselworld 2016 showed that Sinn is still capable of surprising and that their game isn’t exclusively tool divers and hardcore pilot watches. From the ornate 6200 Meisterbund to the rather rakishly handsome 910 Anniversary chronograph, Sinn’s 2016 Baselworld lineup was an impressive pivot from their more common watch stylings. 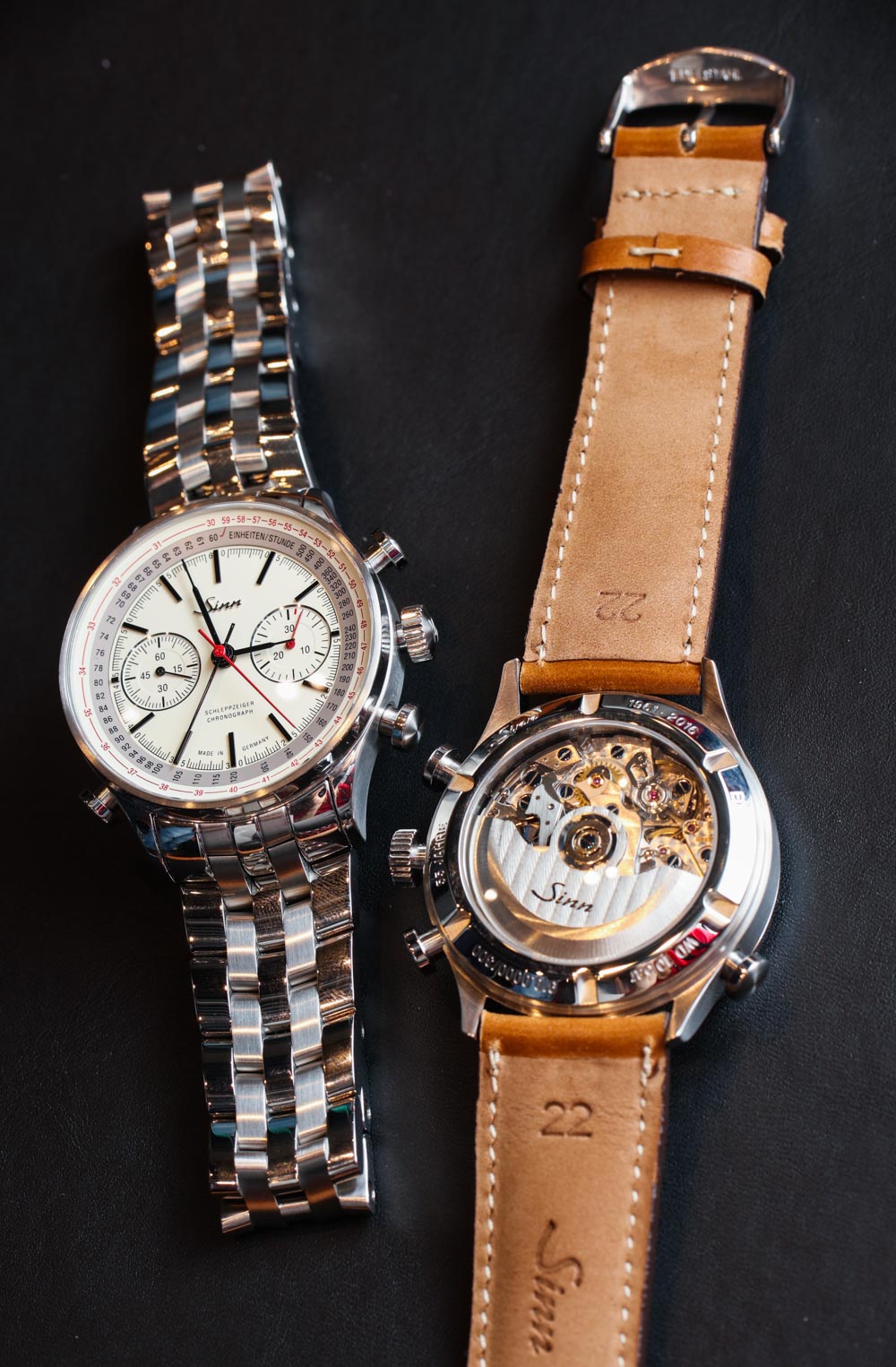 We’ll leave the 6200 for another post and focus on the sporty and versatile Sinn 910 Anniversary. Designed for Sinn’s 55th Anniversary, this limited edition chronograph is equal parts form and function with a 41.5mm steel case housing a column wheel split second automatic chronograph movement. Thickness is 15.5mm, with anti-reflective sapphire crystals front and back protecting a nicely finished movement and a beautiful warm tan dial with black applied markers and red accents. 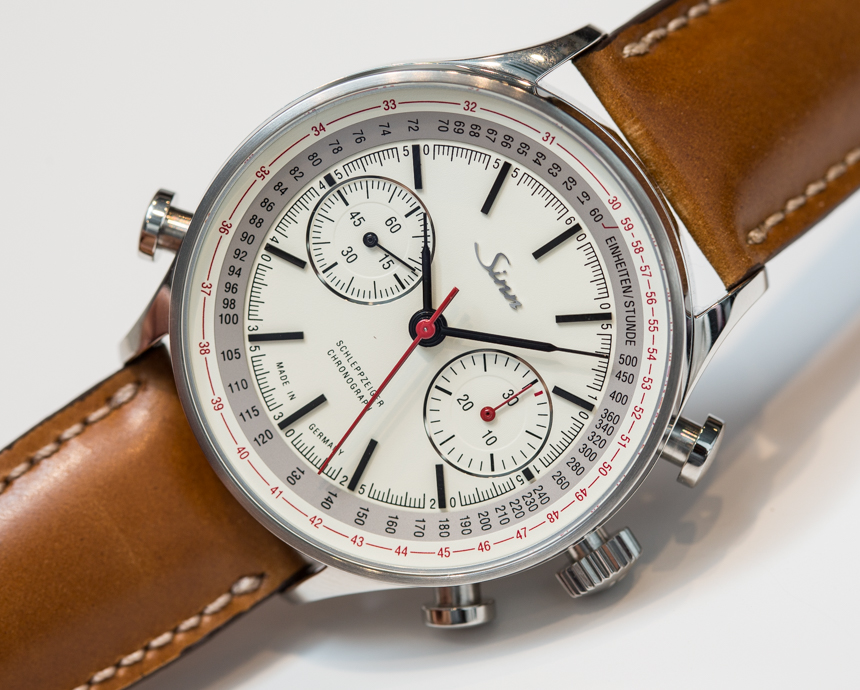 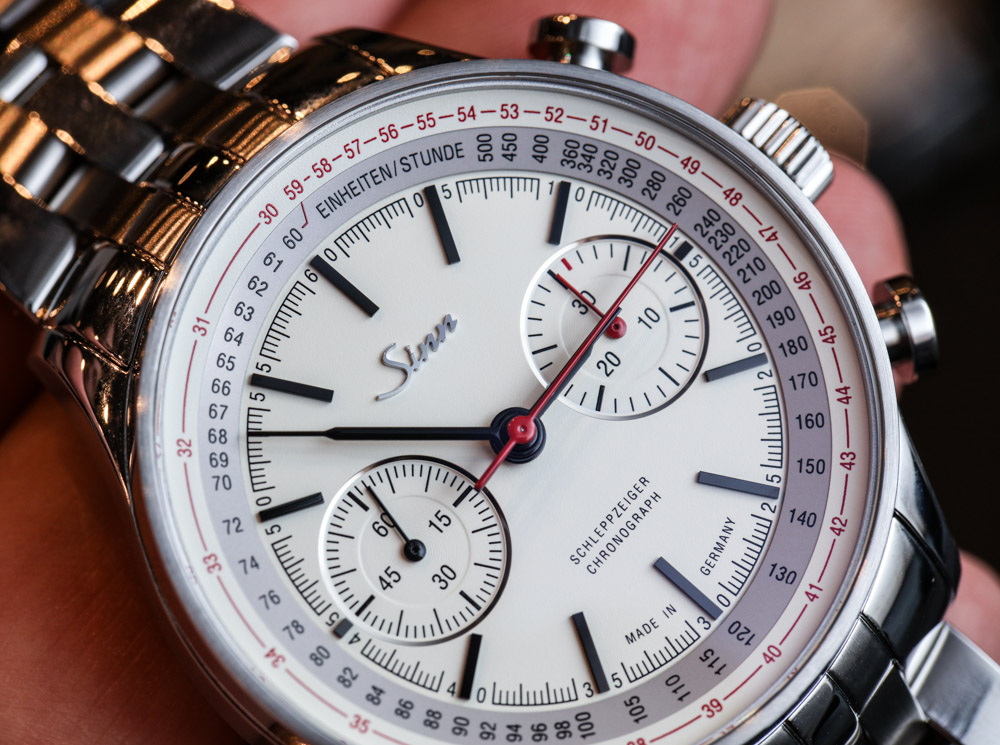 With no date and two sub dials, dial symmetry is strong and the Sinn 910 Anniversary offers dual central seconds hands (for split second timing) and a 30-minute totalizator at three. Using a highly modified ETA 7750 with a dual column wheel rattrapante module from La Joux-Perret, the Sinn 910 Anniversary operates like a traditional chronograph, but you can stop and reset the split measure via the pusher at 8 o’clock. This dual chronograph functionality is excellent for timing the results of two simultaneous events, like the 1st and 2nd results of a sprint, or just for playing with as you pass the time. Furthermore, given their relative rarity and specialized technology, a split second chrono is a cool way to pay tribute to Sinn’s anniversary. 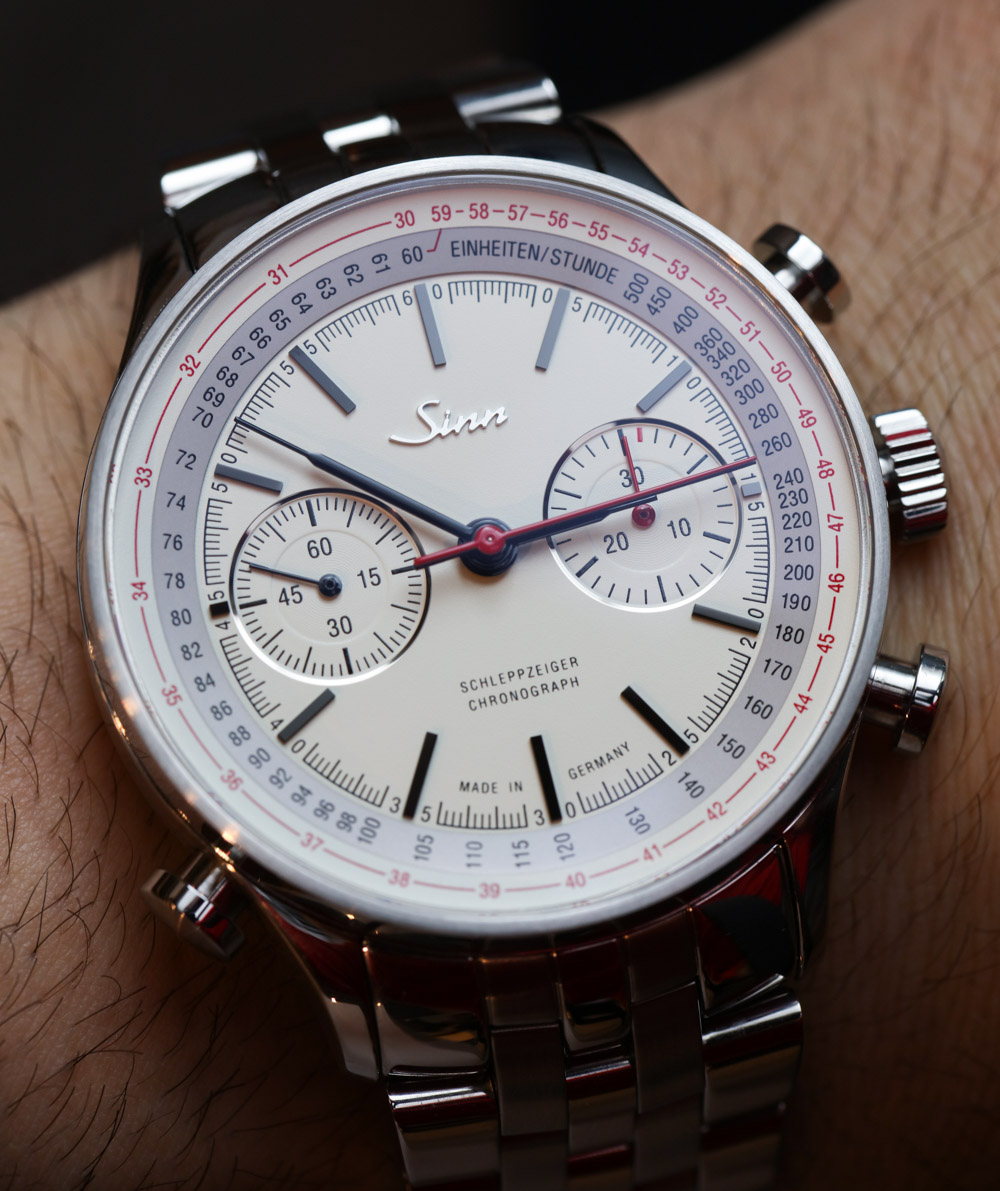 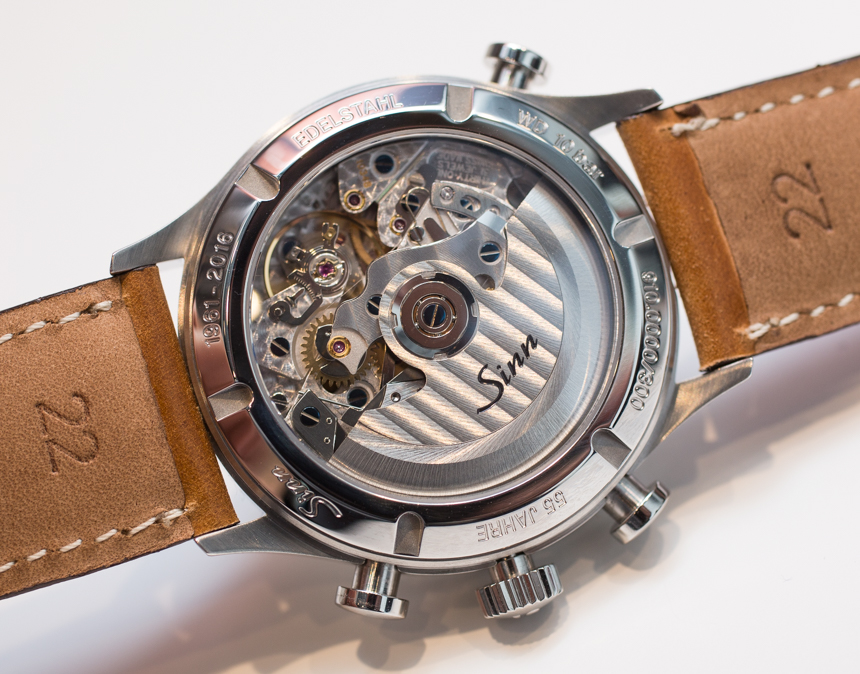 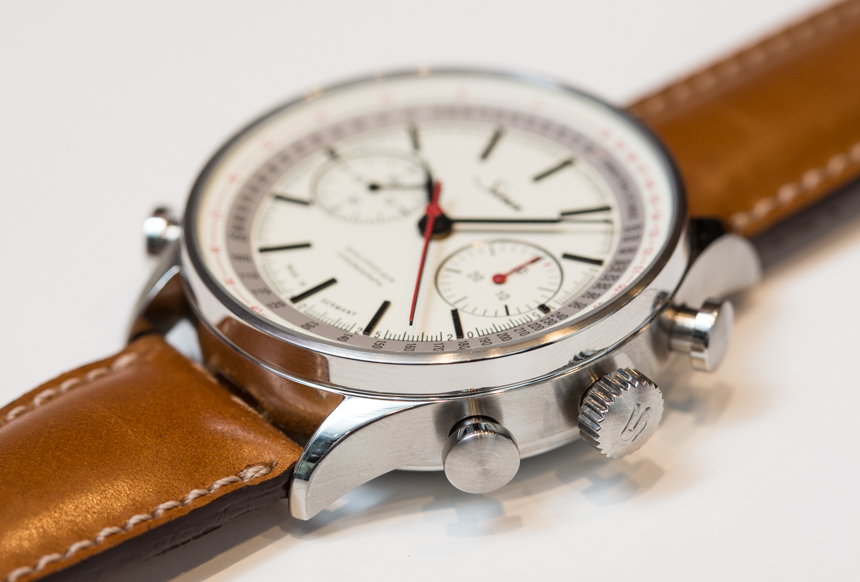 On wrist, none of these background technologies have any effect on the Sinn 910 Anniversary watch’s classic wrist presence. While undoubtedly a fully capable sports watch, the Sinn 910 Anniversary’s aesthetic is perfect for commemorating their 55-year history. The implementation is entirely Sinn while the look is classic, timeless and not so sporty as to push the watch away from those who prefer something a bit more subtle for their day to day. 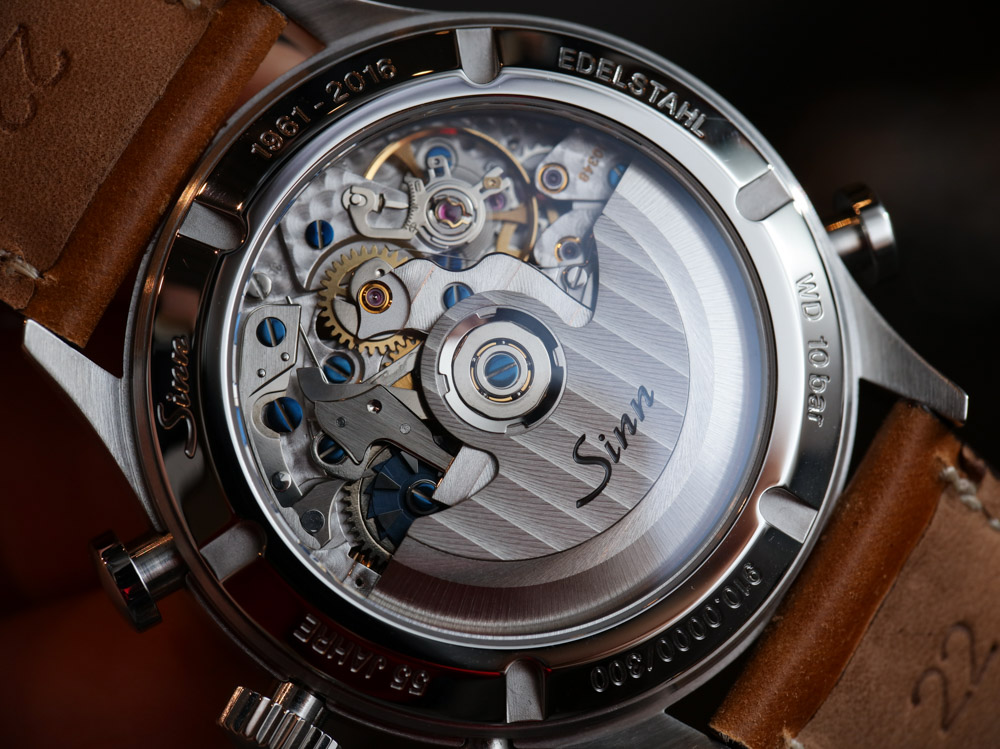 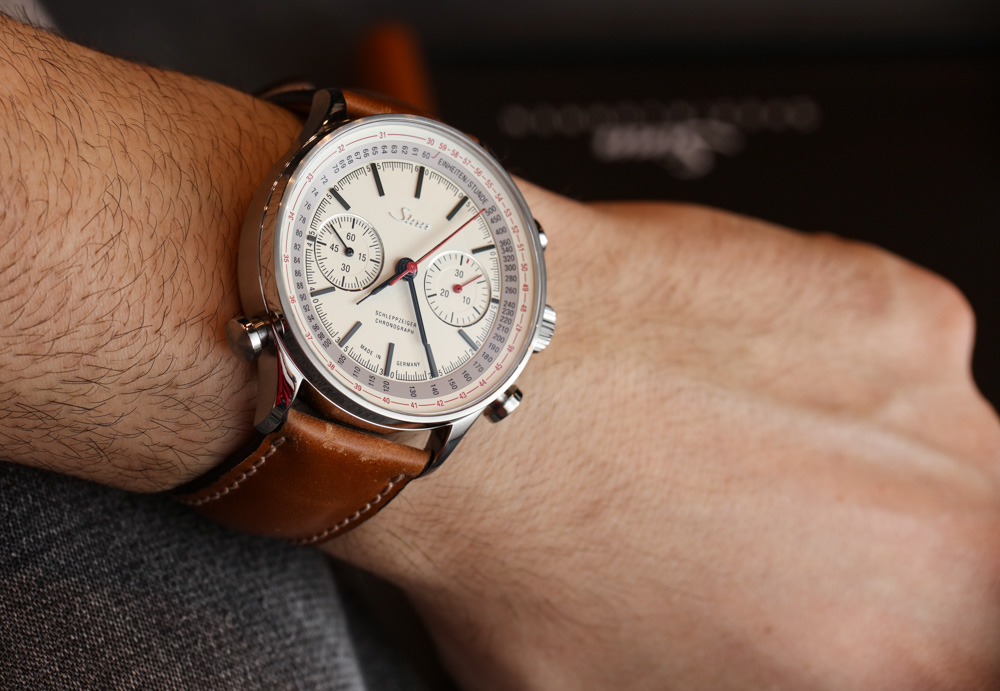 The Sinn 910 Anniversary is easily one of my favorite watches from Baselworld 2016, offering a compelling mix of style and functionality along with the watchnerd credibility of a split second chronograph. Truth be told there is only one thing I don’t like about the Sinn 910 Anniversary; it’s a limited edition of just 300 pieces. With a US domestic price of $5,940, the Sinn 910 Anniversary may make for an expensive Sinn chronograph, but the split second functionality puts the 910 on an entirely different level than a standard 7750 model. With so few being produced, if you’re scoffing at the price, it’ll likely be long sold out by the time you come to your senses. sinn.de