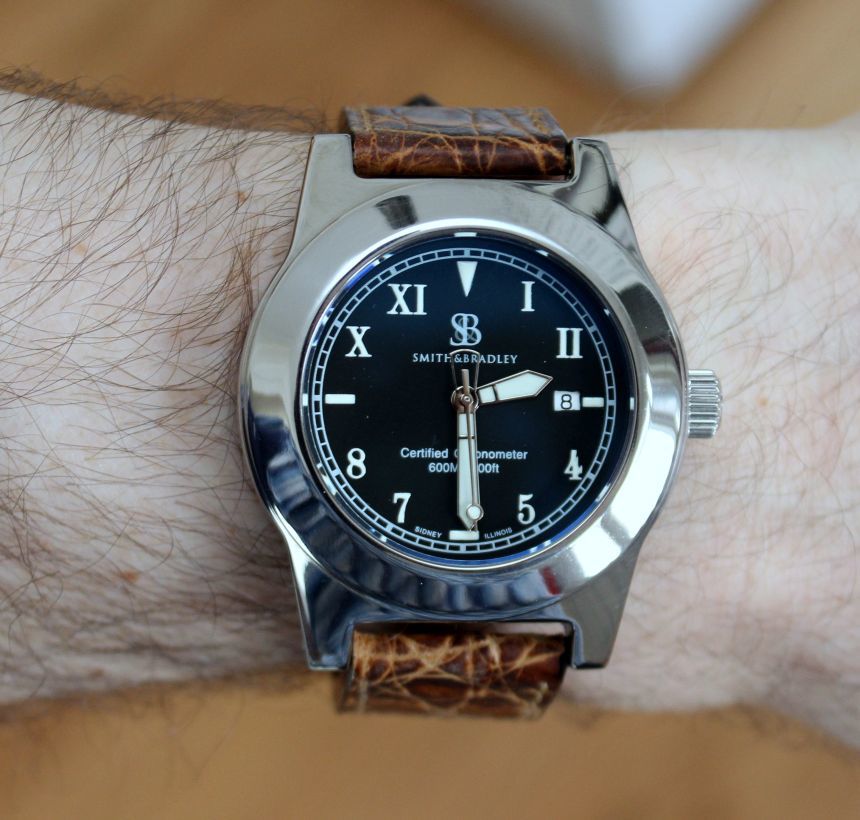 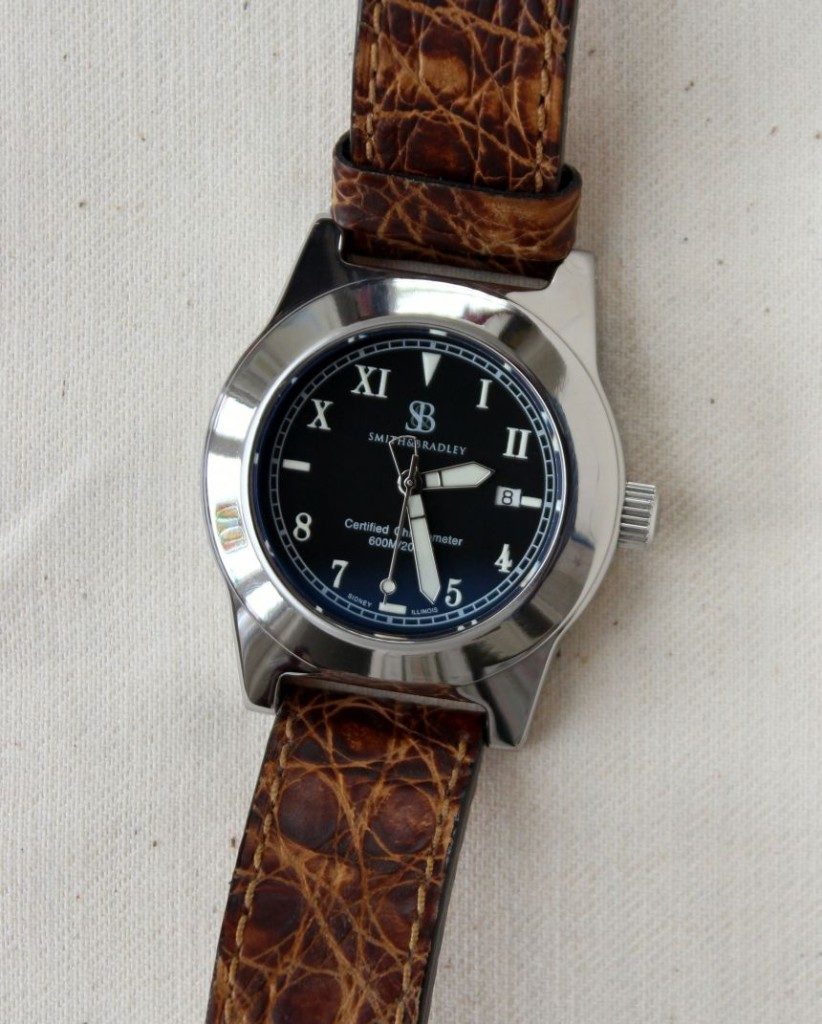 When it comes to the watch brands, every one of them is crafting a story around what they are creating. For some, the focus is on lineage, while others focus more on the affordability of their designs. For the newer, smaller brands, this is even more critical. With Smith & Bradley, that story has been a focus on the quality of their build, with final assembly and QA occurring in their shop in Sidney, Illinois. The Smith & Bradley Heritage watch opens a new chapter in that story.

This is a chapter that I have been fortunate to know was being written. I’ve met with both Jerommie Smith and Ryan Bradley quite a few times (the benefit of being relatively local to their operation), and there were always hints at what was in the works. One of the overarching themes of these teasers was the desire to be able to create a true “American-made” watch. While items like the movement are still sourced from overseas, they have built a supply chain that is in large part American. 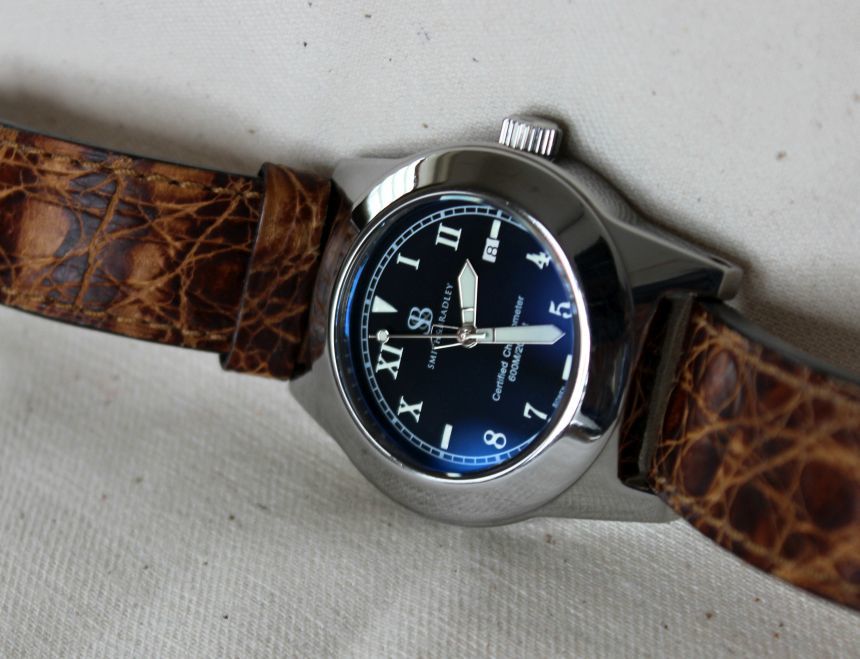 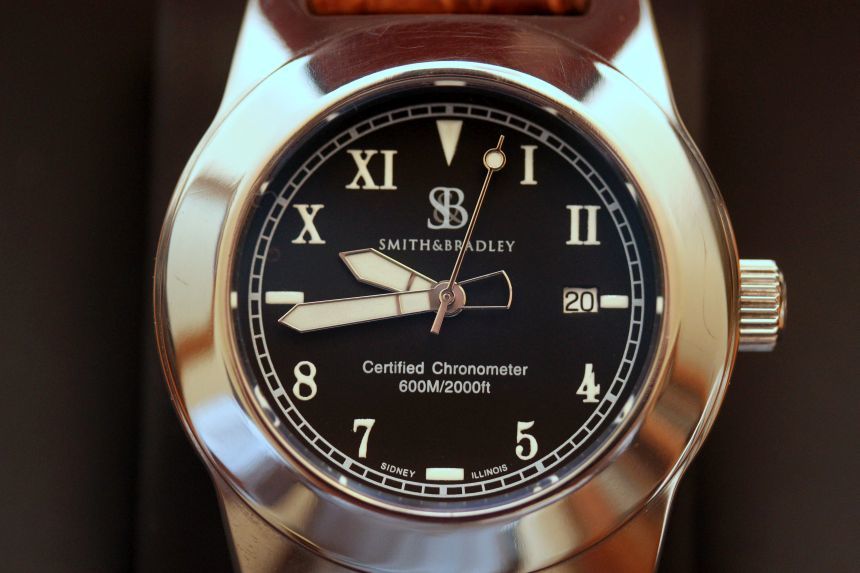 Aside from any sense of patriotism you may have, or a desire to have watches from various countries, why should something like this matter? In one sense, perhaps, it doesn’t: you should look for the best watch you can get for your personal tastes and budget. On the other hand, what Smith & Bradley are doing here should be applauded, in my opinion. They are finding new ways of building what they want to make, opening up additional doors with their suppliers. Having a more robust supply base should then lead to more interesting designs, and having them more local (at least in the same country) allows for things like supplier visits and quicker turnaround on prototypes. These are, of course, very good things in the world of manufacturing.

So, what is it that they have managed to build here in the States? For the Smith & Bradley Heritage, we will start with the biggest visible component – the titanium case. This case, along with the movement holder and steel case back (more on that in a bit) are created in California. With the case, there is no denying that it is a massive chunk of metal, with one of the bigger non-functional bezels I’ve seen on a watch in some time. Fortunately, the titanium also brings light weight to the mix, so this is not an overly heavy watch on the wrist. 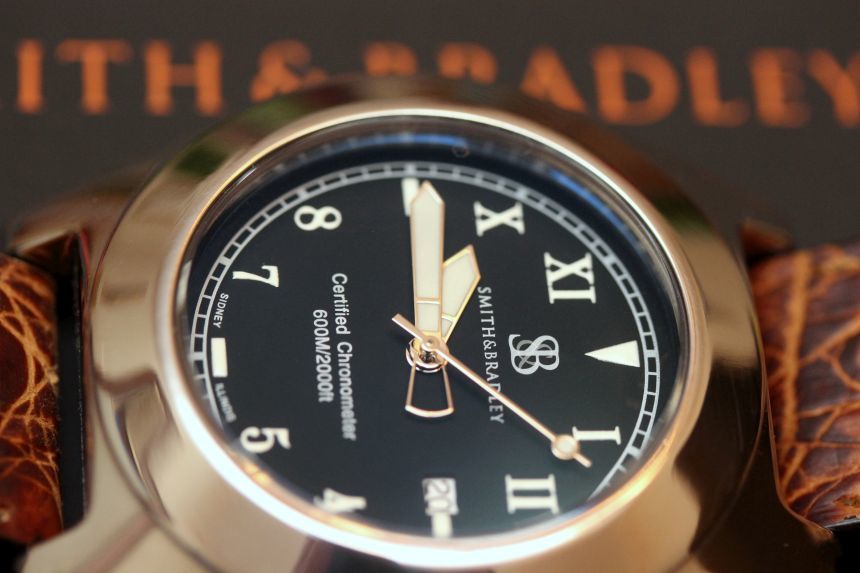 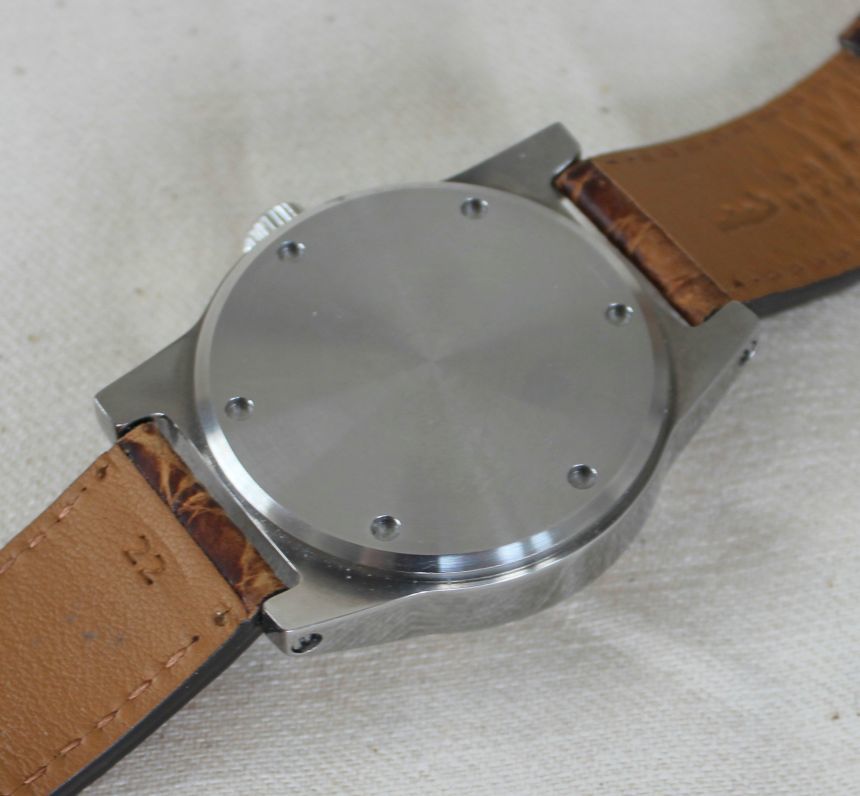 In fact, they felt the Smith & Bradley Heritage was actually too light when it was fully titanium, so they had the California shop craft a stainless steel case back. This nets an on-the-wrist weight of 120g, which is pretty light for a watch measuring in at 45mm by 14mm thick. I’m sure the shop was happy to work in steel for that caseback as well, as the machining and polishing of the titanium presents its own unique challenges.

The last challenge that particular shop rose to was creating the movement holder for the Smith & Bradley Heritage. They managed to create one with such precise tolerances that it actually makes things a bit tricky for Smith & Bradley to get the watch assembled. Once aligned properly, though, they say the movement holder is just “sucked in” to the case. These precise tolerances also make for a very interesting feel when you wind the movement, in that you almost cannot feel the winding at all.

In many watches, you feel some form of friction when you begin winding the stem. On the Smith & Bradley Heritage, you feel practically nothing. As Smith himself noted, it’s an odd feeling – you put your ear up to the watch to ensure that it is actually winding. He attributes this to the tight tolerances they were able to maintain in both the case and the movement holder, thereby reducing any friction that might be present on the stem. Since I’m not about to open the caseback (and even if I were inclined, I wouldn’t have the special tool required), so I’m willing to take their word on this.

Tucked into that movement holder is the first non-American component we’ll touch on. The default configuration will offer an ETA 2892 movement (at a price of $2,950), with an upgrade available to COSC-grade Soprod A10 (our review sample had a COSC-grade ETA 2892), which brings the price up to $3,450. While the site lists an American-built calibre as well, that is something that is currently in the works (and that’s the most we can reveal on that), and will be part of the next model they offer. Regardless of the movement, you will have a choice in handsets to be driven by it; those hands are also made in California. 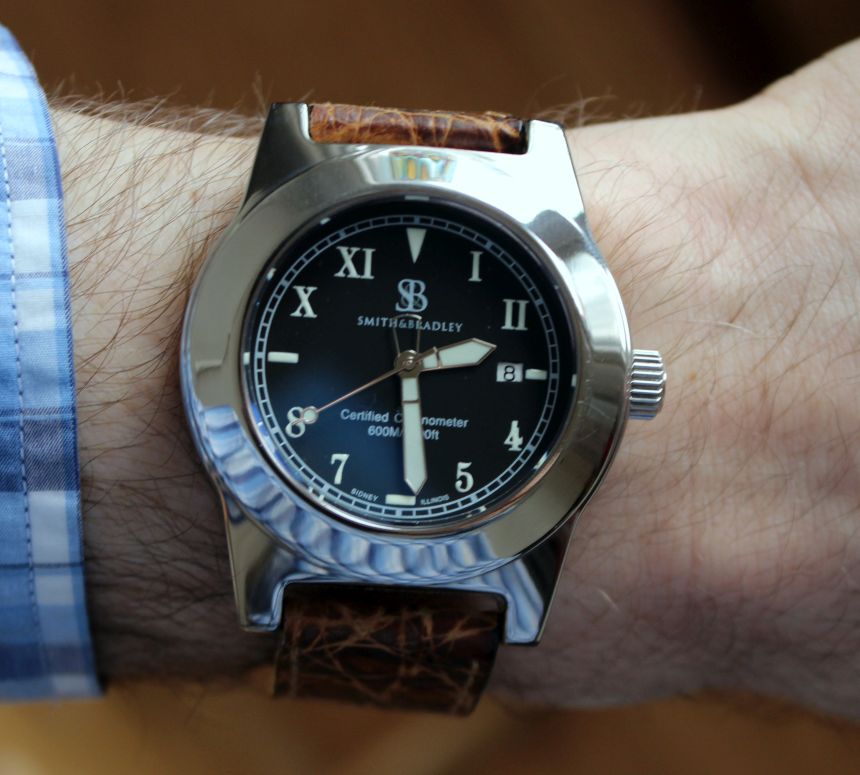 Now, I do want to touch on the handset for a moment. This is something we reviewers tend to be critical of, and I have had a particular (if good-natured) nit-picking session with the handset seen on the Smith & Bradley Atlantis. As Smith handed over the Smith & Bradley Heritage review sample, he joked that he hoped I would like this handset better. And you know what? I do. Gone are the needle-tips I saw on other models, and the lumed hands extend fully to their assigned indices, with the hour hand slightly shortened so it does not cut off the date display.

Another interesting twist they have is a hollowed out counter-balance on the hour hand, which makes things a bit more visually interesting. The curious part of me wonders how it would look if the counterbalance was instead moved onto the hour hand. It’s not that things look bad with it on the minute hand, it’s just one of those tweaks that sort of sets my mind to wondering. 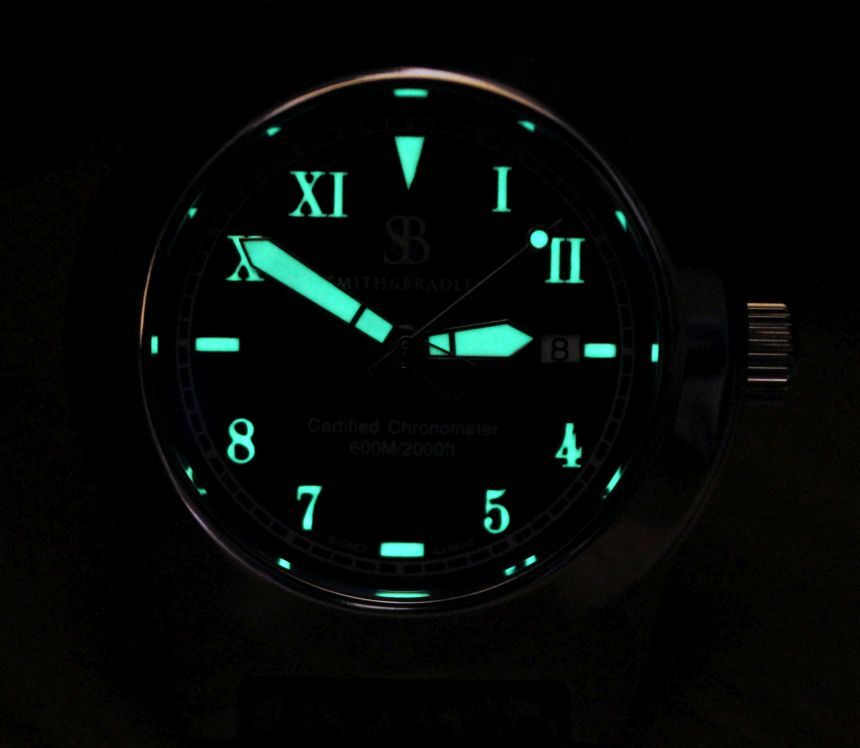 Those hands swing around a very legible California dial (funnily enough, not made in California – it comes from Hong Kong). The California dial is rather well known, and it shows up in a variety of watches, and has for some time. This speaks to both its design appeal, as well as it being plainly functional. Here, presented in a white-on-black configuration, I had zero problem with at-a-glance readability through my time with the watch.

It’s also worth noting that visibility in the dark is spot on here as well. Sometimes, you will notice differences in lume colors between a handset and dial. While this is sometimes intentional, it many times is not. It’s just a fact that items coming from different suppliers sometimes don’t quite match. In our sample, at least, I could not detect any differences in the lume hues, and found it to glow quite brightly when fully “charged,” with things being legible still hours later, provided your eyes are acclimated to the dark. 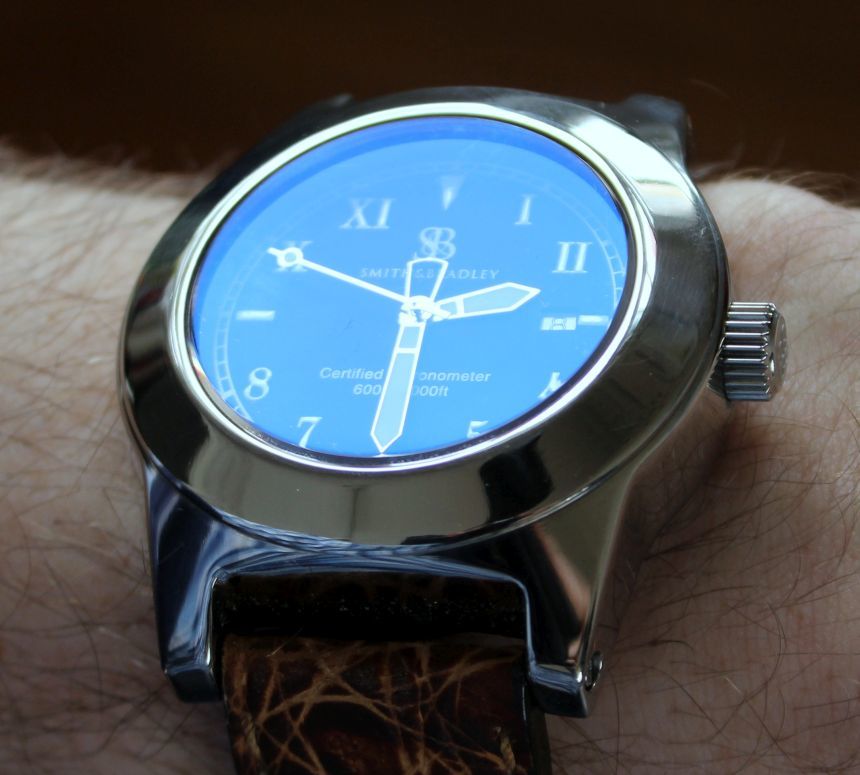 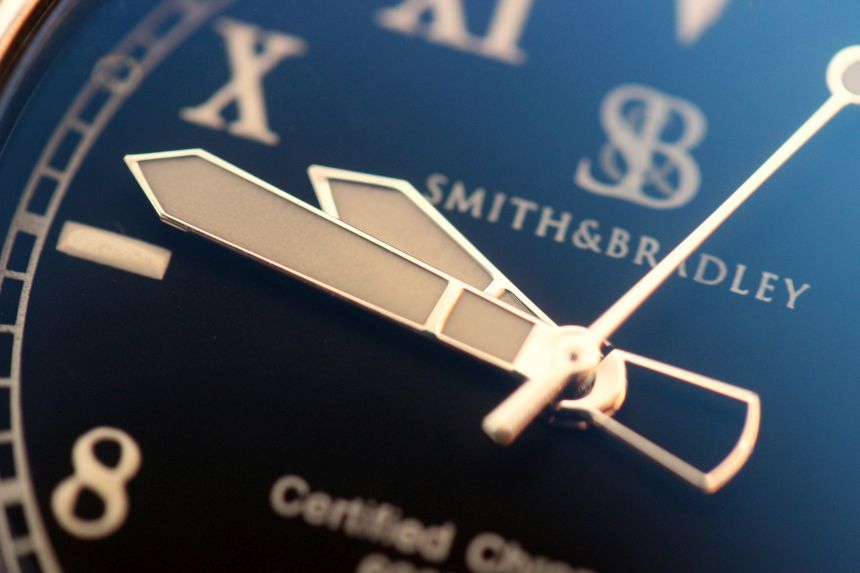 Topping things off, you have a sapphire crystal (as you would expect in an entry-level luxury watch like this) which comes to S&B from California, but is ultimately sourced from Switzerland. The gasket on that crystal is sourced from California. The flat crystal feels thematically appropriate to the watch, with a slight lip indicating it being raised up from the bezel. The AR coating on it is decent, with most reflections (unless they’re perpendicular to the watch) simply giving things a translucent blue cast. In other words, the coating is doing what you would expect.

Attached to the Smith & Bradley Heritage was one of my favorite features of the watch – a hand-sewn (in the US) crocodile strap. I have handled a variety of croc-embossed leather straps, but this was my first time up close and personal with the actual hide. Simply put, this strap has an amazing pattern, giving the impression of light shining through rippling water. While thick, and presumably tough, the strap formed to the curve of my wrist pretty quickly. As you can see in the pictures, it maintains that curve off the wrist, unlike a cowhide strap, which you can generally straighten out. I’m not as much of a fan of the Pre-V buckle they paired with it, but that’s just me, and is something that could be easily remedied on the 22mm strap. 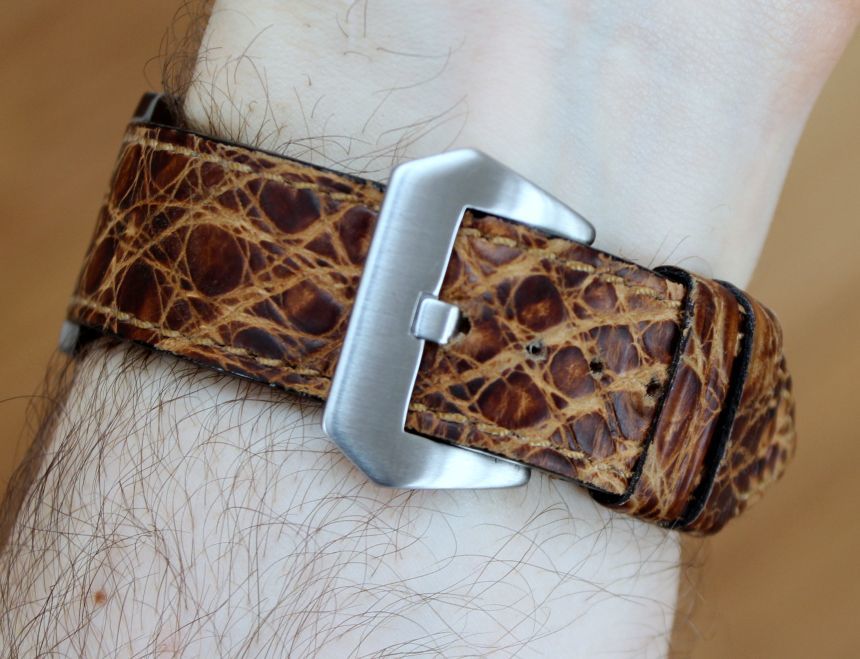 Of course, a strap is only one part of the watch, albeit one that impacts the comfort a great deal. While there’s no mistaking that the Smith & Bradley Heritage is a larger watch, I found it to be rather comfortable. If it had been made completely from steel, it would have been a rather heavy piece. Fortunately, as I mentioned before, the titanium keeps the weight down. The overall look of the piece pointed it to a more casual wear, with the polished finish allowing it to work with a suit (which I did do a few times). A lot of that polish shows up on the front of the watch, which is an area of the design I am split on.

When I first saw the Smith & Bradley Heritage, I was a bit surprised to see how massive the bezel was. As I have worn the watch, that initial shock has worn off, and I have gotten used to it. Fortunately, the dial diameter is such that it does not feel dwarfed by the case, and the look of things is what I would call robust. That said, I would be curious to see if a future version of the Smith & Bradley Heritage could perhaps result in a slimmed down case and bezel. 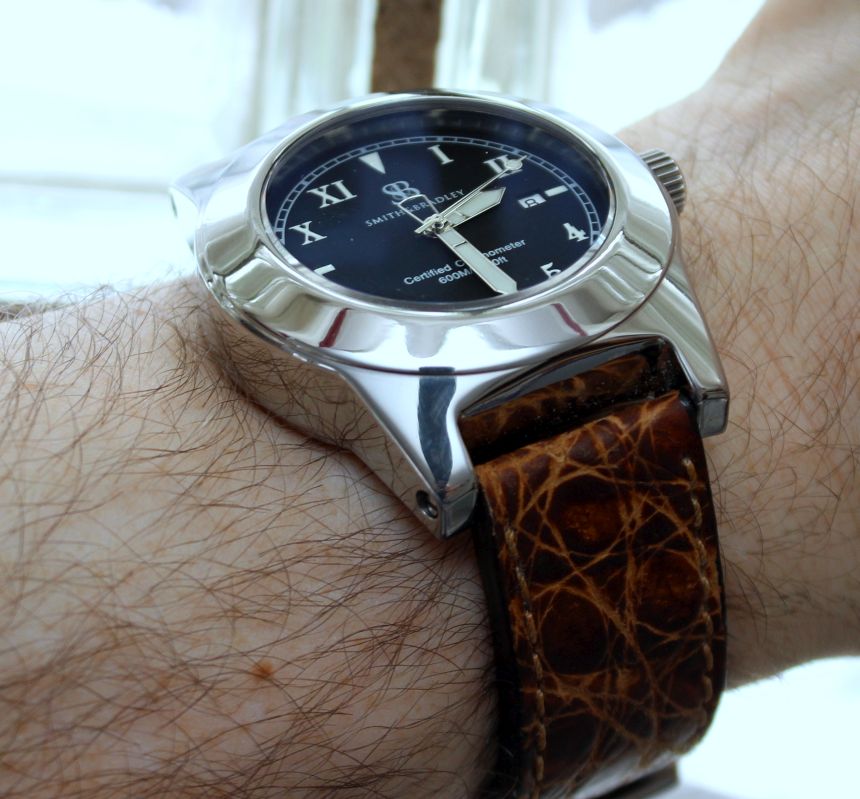 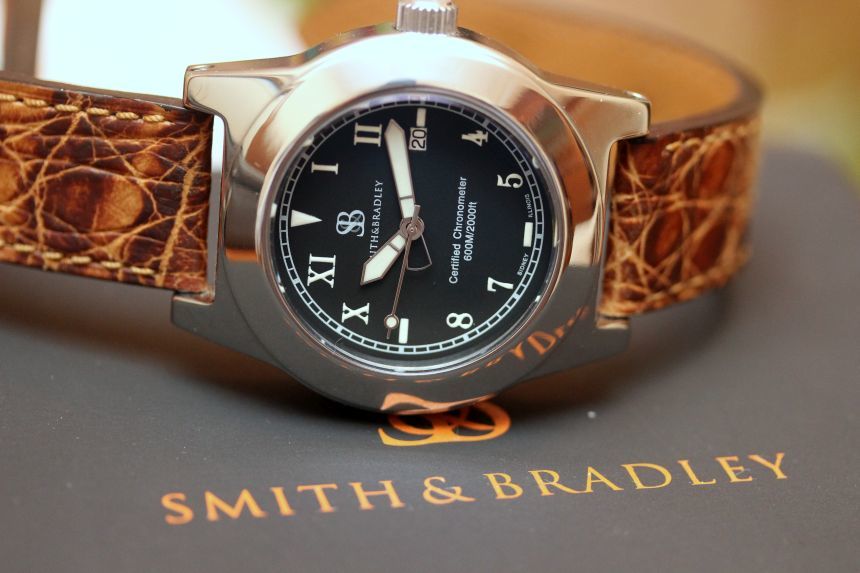 Then again, the brand is positioning the watch as something that will last and be passed along to the next generation. In that case, the robust case could definitely be a benefit, protecting the movement as it does (including it’s 2000m water resistance rating). I cannot speak as to that sort of longevity, so I will speak to what the watch represents today. Smith & Bradley have come quite a ways since 2012, and while the Smith & Bradley Heritage is not a 100% American-made watch, like they had hoped, they have certainly taken big strides towards achieving that goal. At the same time, they’ve leveraged their attention to detail and quality to turn out their first luxury-level watch.

The Smith & Bradley Heritage is available for pre-order via their website (no Kickstarter campaign for this watch, another first for the brand), with production being limited to 150 pieces. In a few short years, the brand has really managed to stretch their wings, and I am glad to see the moves they are making in terms of building up a local supplier base. I’m not ready to call them the next Elgin (another Illinois watch company of days gone by), but they are making the case that watchmaking can succeed here in the US. Their previous work, and especially now with the Smith & Bradley Heritage, sets a solid foundation. What’s next for the brand? I’m not sure yet, but we’ll bring you the news once we know.  smithbradleyltd.com