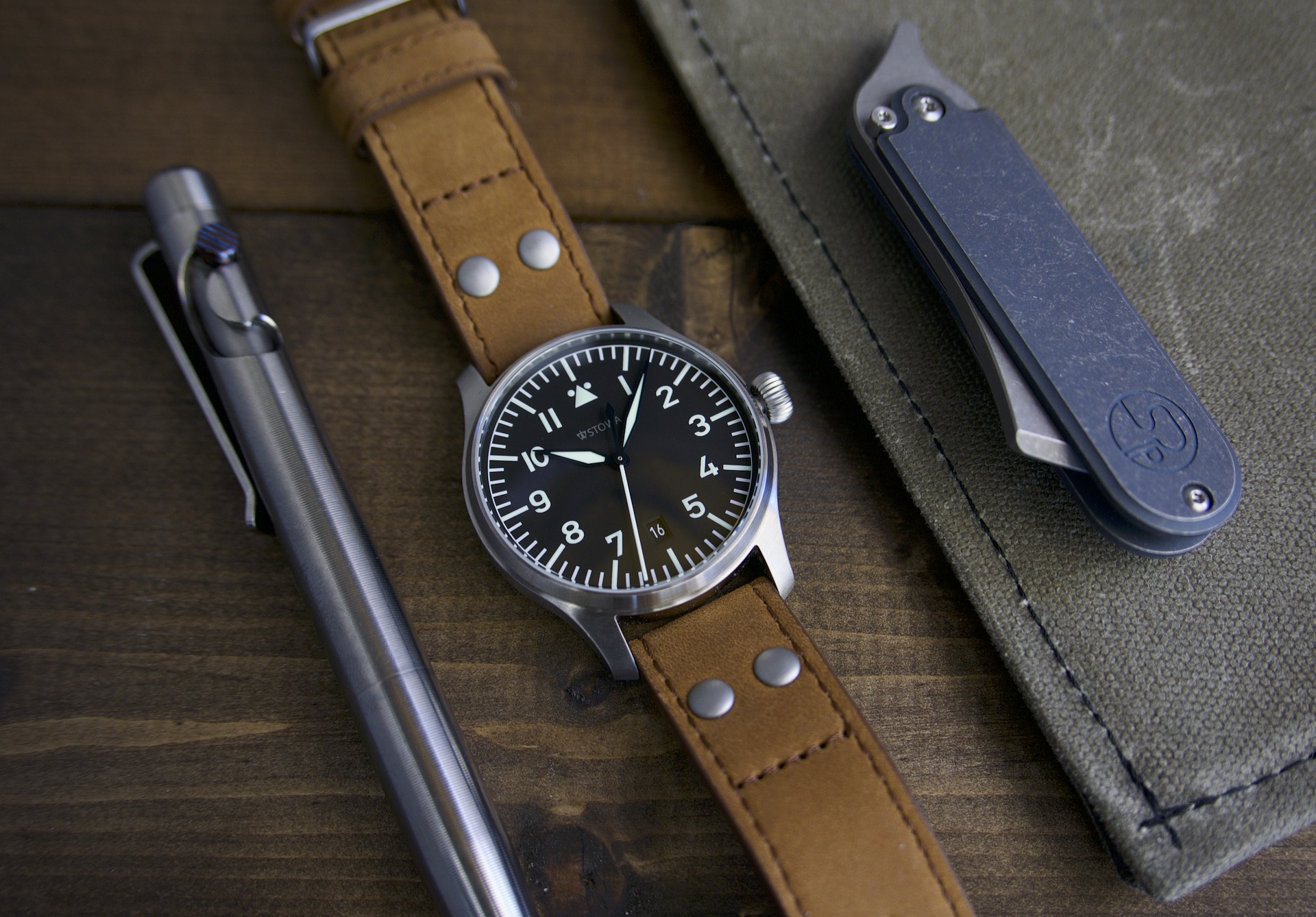 Full disclosure: I’m a big Stowa fan. In fact, a Stowa flieger (pilot watch) very similar to the one I’m reviewing here was the gateway drug that led me into my horological addiction. No surprise, then, that I was thrilled when Stowa agreed to loan me its flagship watch to review: the Stowa Flieger Klassik 40. For those unfamiliar with the brand, Stowa was originally founded in 1927 by Walter Storz and remained a family-run company until it was purchased by Jörg Schauer in 1996. Upon taking over Stowa, Schauer kept true to the history of the brand, reanimating and updating watches from Stowa’s vast back catalog, including funky divers from the 60s (Seatime) and the flieger watches for which Stowa is likely best known, and innovating with new styles and designs with a distinctly German aesthetic and utterly reasonable price point. 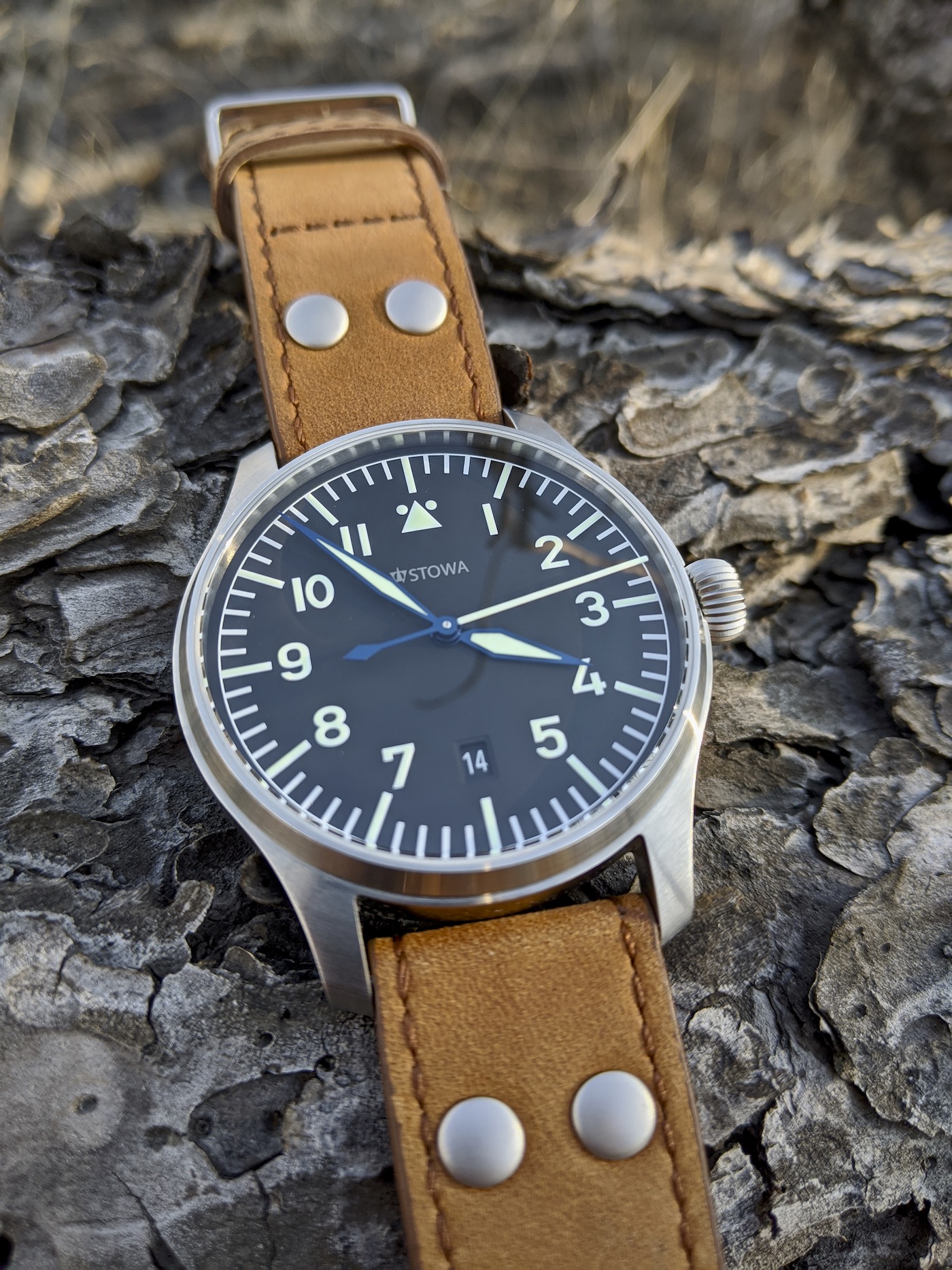 Stowa was one of the five watchmakers that supplied watches to the German Air Force, or Luftwaffe, during WWII alongside A. Lange & Söhne, IWC, Laco, and Wempe. The Baumuster “A” dial, which features Arabic hour numerals and a distinctive triangle and dots at 12, was originally produced in 1940 with a massive 55mm case and a Unitas 2812 movement. These were true tool watches and used as such, being flown on countless missions during WWII. Stowa’s production of the B-Uhr watches continued until 1945 when the Pforzheim factory was bombed by British forces. Despite, or because of, this poignant link to history, the flieger watch’s simplicity, legibility, and iconic design have made them one of the most popular and recognizable watch styles today. Stowa, however, didn’t recreate the flieger until the watch was resurrected in 1997. Since then, it’s become an instant classic among watch collectors. 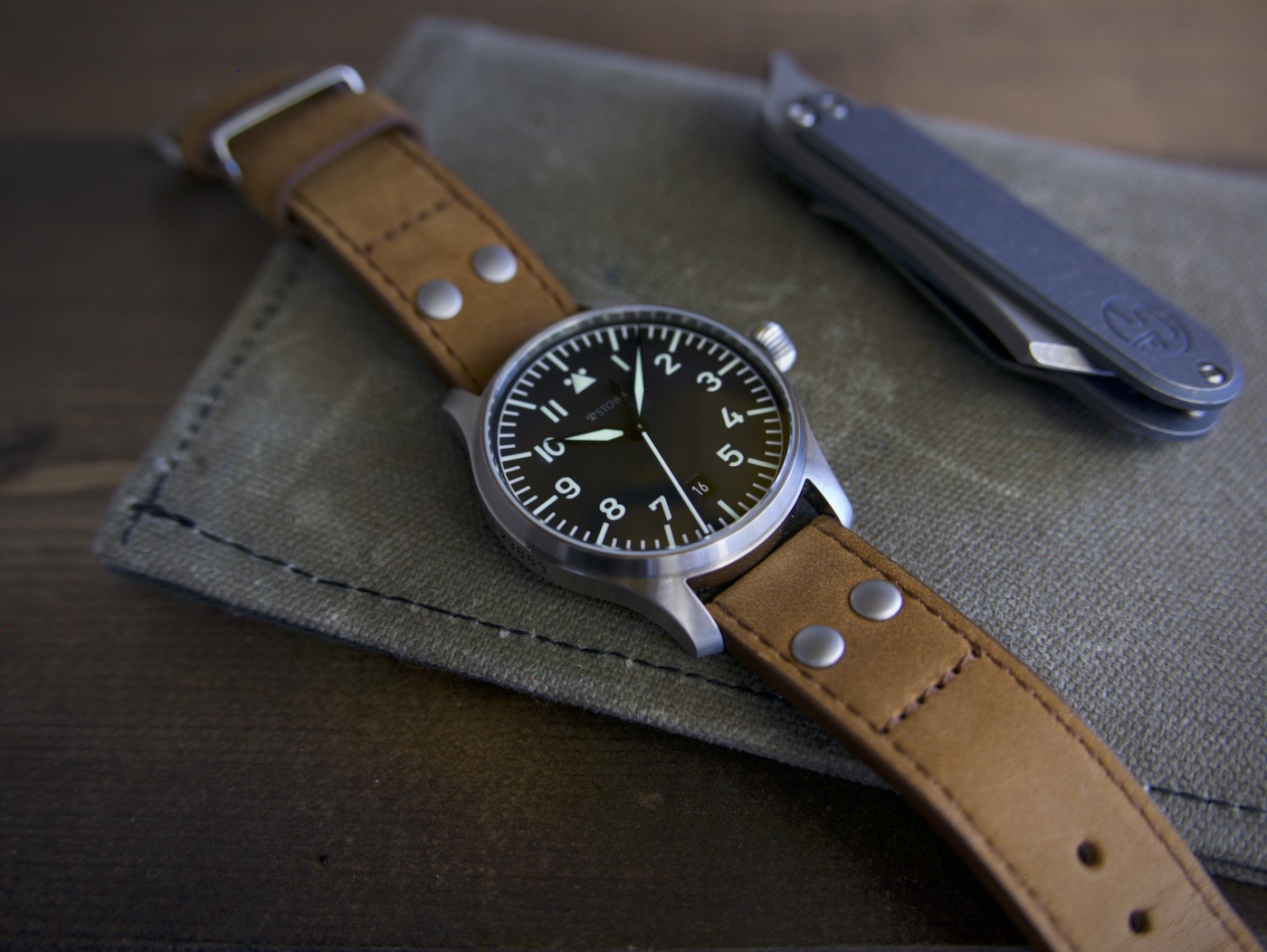 With a traditional flieger watch, the design parameters have been set for nearly a century, so the measure of success is not so much in design, but in execution. To put it simply, Stowa has nailed the major elements, the small details, and the intangibles that make a great watch. Add in the extremely attractive price-to-quality ratio, and the Stowa Flieger Klassik is a value proposition that’s hard to beat. 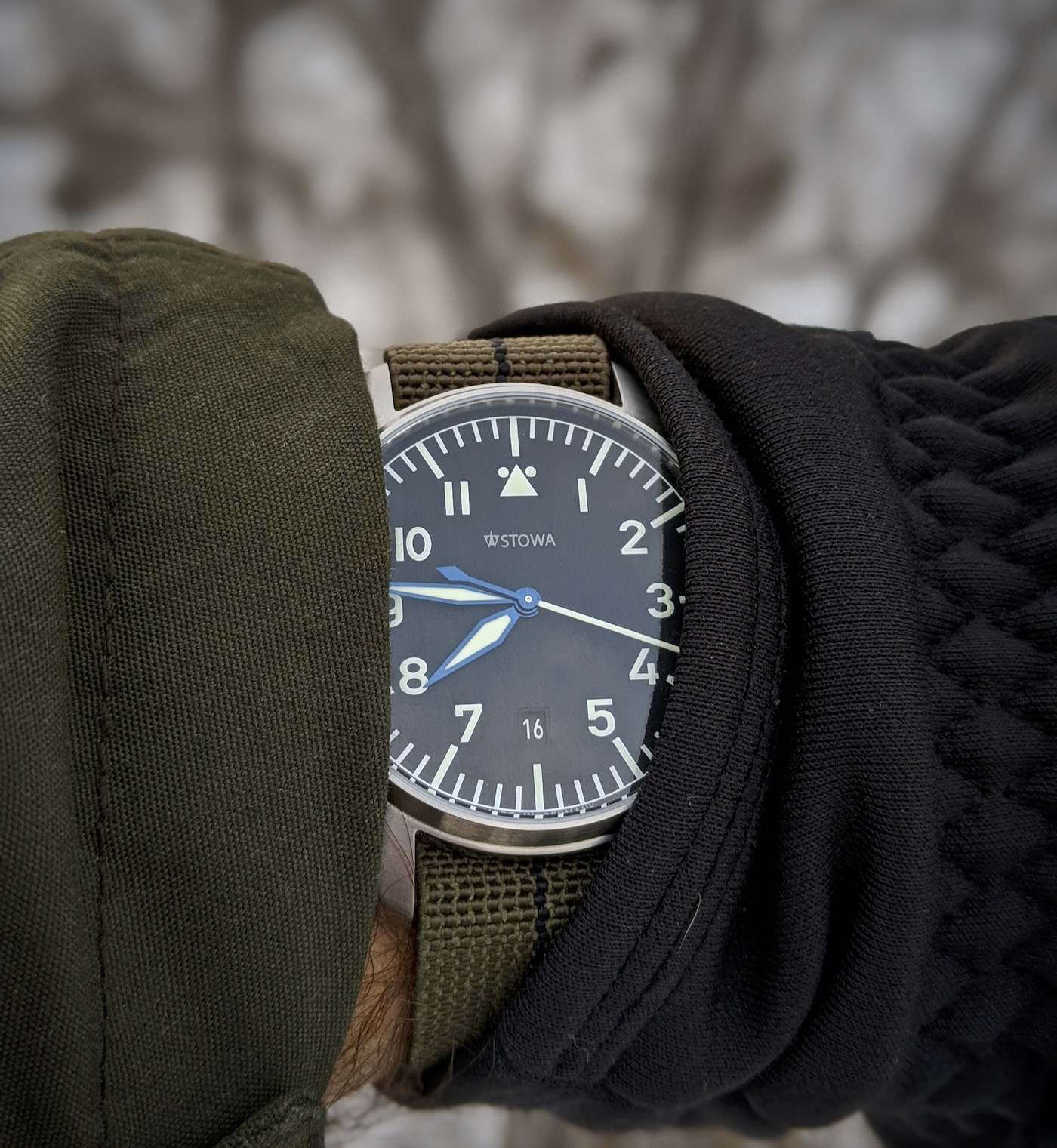 The Stowa Flieger Klassik comes in a 40mm stainless steel case — a far cry from the 55mm Flieger watches worn by the Luftwaffe, but a whole lot more wearable day-to-day. That said, despite the more reasonable size, the watch has plenty of wrist presence due to the small bezel and 48.6mm lugs. Those long lugs, coupled with the narrow bezel, result in a watch that wears large, but comfortably, on my 6.75” wrist. Though the dial design is traditional, the fine brushing, elegant curves, and sapphire display caseback are clear and welcome nods to modernity. One throwback element, however, comes in the form of the large onion crown, which is spot-on aesthetically for this flieger and is a pleasure to use. The crown is push-pull and does not screw down, contributing to the modest 50m water resistance. My personal preference would be for a screw-down crown and increased water resistance. Note, however, that those wishing for higher water resistance can opt for Stowa’s Flieger Sport, though it comes in a larger 43mm case. 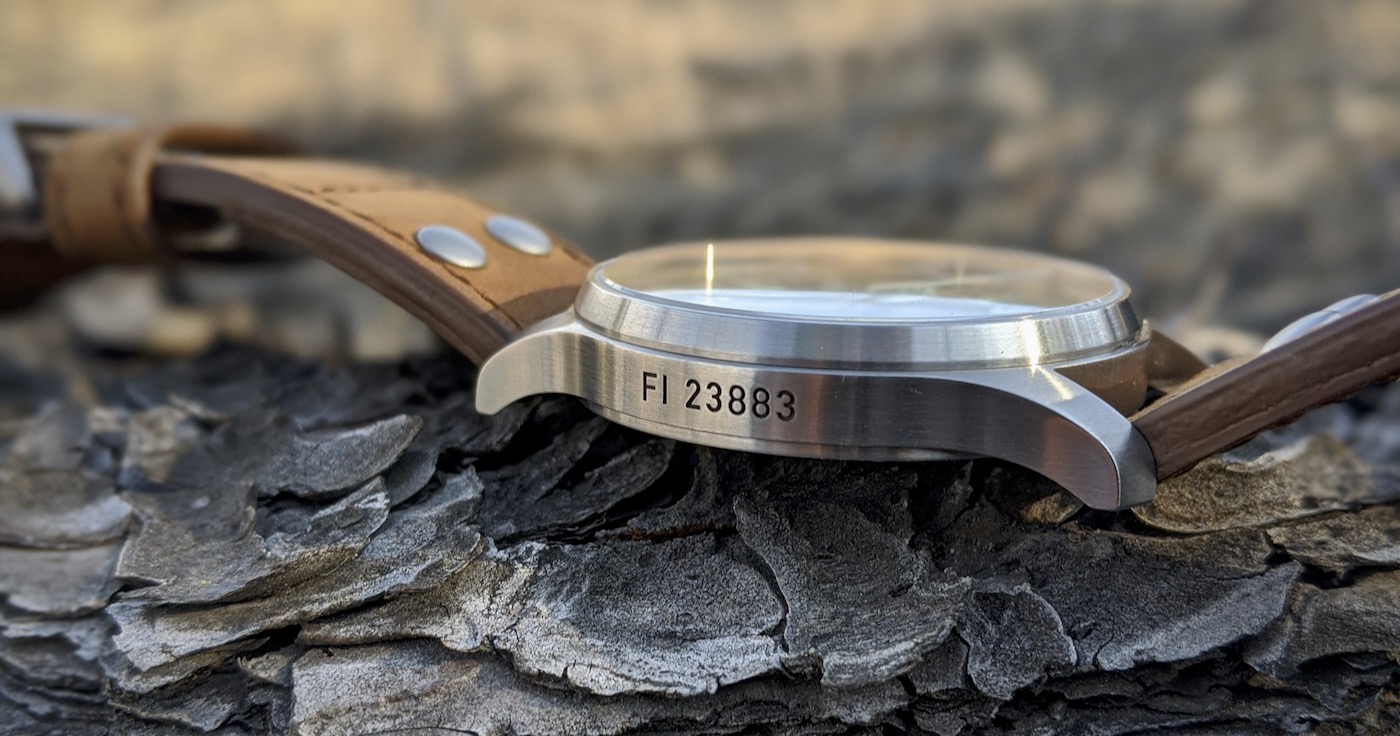 To me, the case is where the maturity of Stowa’s design language and Jörg Schauer’s beautifully restrained style comes to the fore. There’s nothing flashy or new about what Stowa has done with the case; it simply nailed the lines, proportions, and finishing. The result is simple and elegant with nothing you’d want to add or remove — except, perhaps, for the FL23883 engraving on the side. This designation was printed on the case of military-issued fliegers and derives from the original German military specifications: FL for flight, 23 for navigation, and 883 was designation code from the German Testing Office for Aeronautics. Note that, like many aspects on this watch, the FL23883 engraving is entirely optional, and I’d argue would probably fit best on the version with a sterile dial (no logo) and no date. Regardless, it’s an option if you want it. 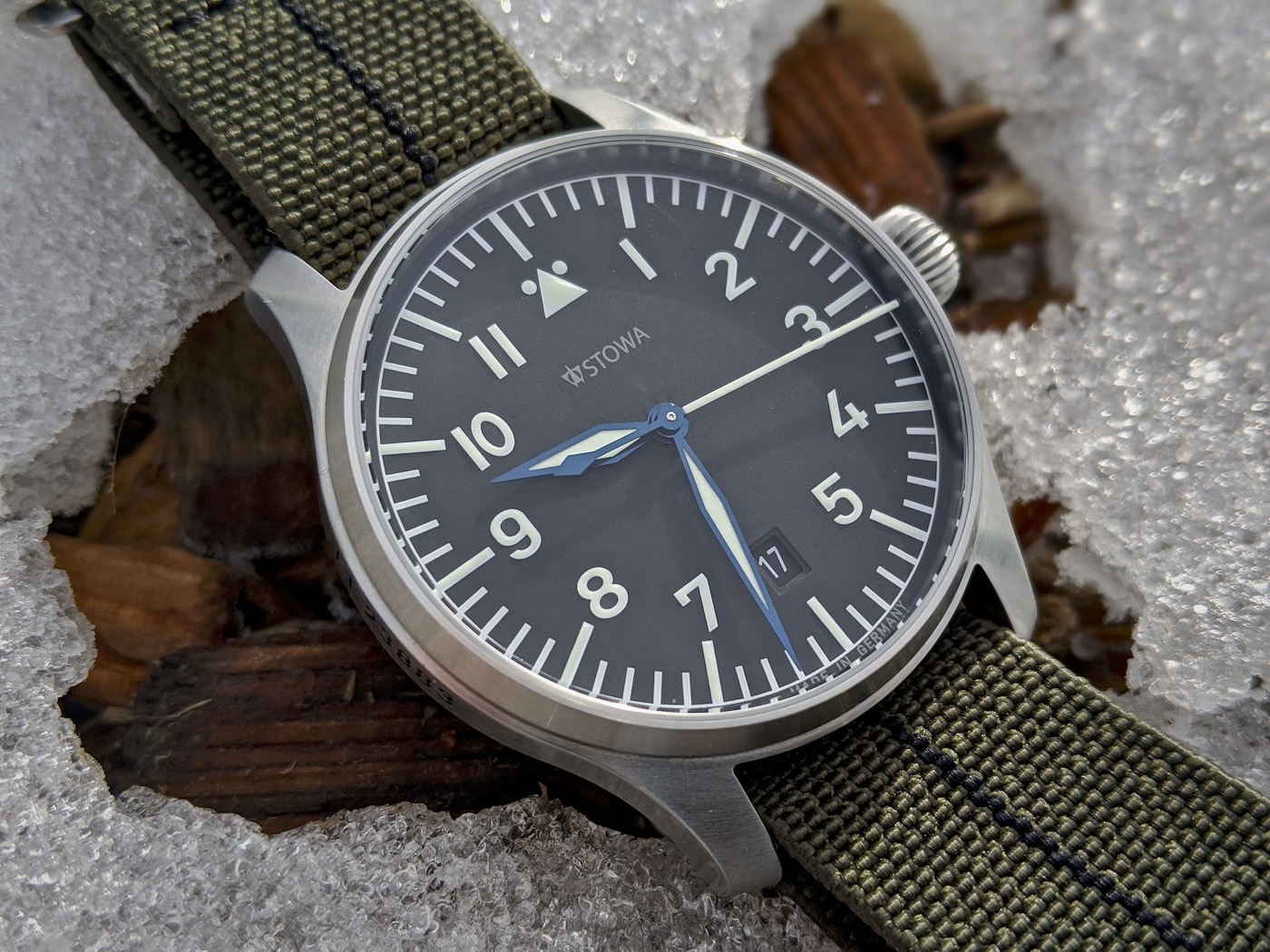 The Stowa Flieger Klassik features a Baumuster “A” dial with Arabic hours, date window at 6 o’clock, triangle with two dots at the point at 12, and a subdued logo below 12.  The dial is matte black with exceptionally crisp printing and application of ample C3 Super-LumiNova. Stowa offers several variants, including date or no date options, and sterile dials that lack the Stowa logo. If you’re looking for historic accuracy, the sterile no-date version is the way to go. And while I’ll give the no-date version the nod aesthetically due to the increased symmetry, I personally prefer date complications if given the choice, and Stowa’s placement of the date window at 6 is as unobtrusive as it gets. The logo is subtle and dark gray, and I prefer it on models with the date window. Speaking of the logo, Stowa changed to the modern, all-caps Stowa and W seal a few years back and caused a minor ruckus, with Stowa fans upset at losing the long-used insignia featuring a swooping S. My personal Stowa Flieger had the old logo and I have to admit…I like the new logo better on the Flieger Klassik. 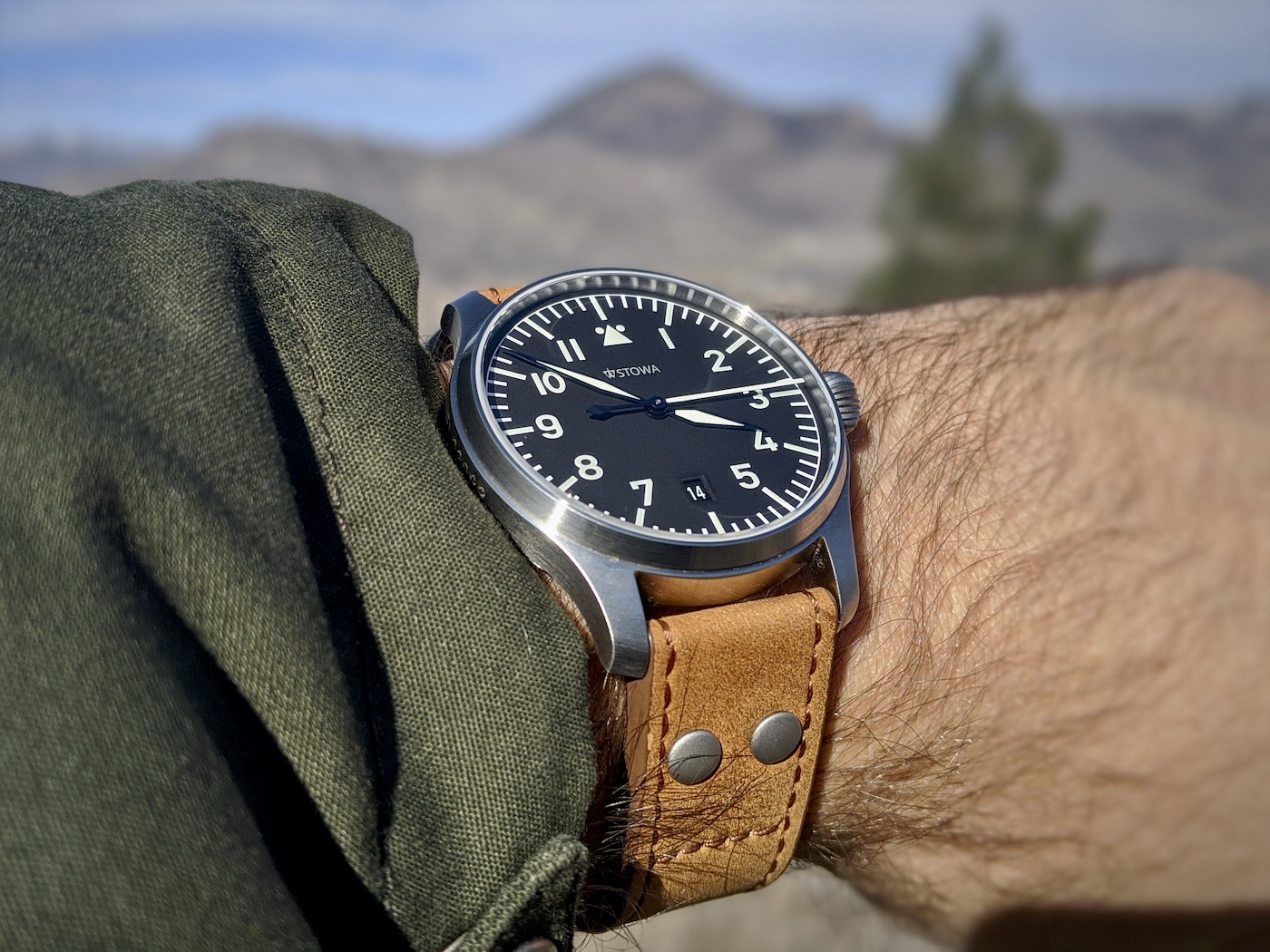 Stowa’s handset features thermal-blued, lumed sword hands and a fully illuminated seconds hand. If you haven’t spent time with thermal-blued hands, they really are worth the time, effort, and expense that goes into them. The hands change color depending on viewing angle and light, moving from an intense blue to deep black. The unexpected pop of color on such a sterile and austere watch provides life and personality that would otherwise be lacking. As much as I love the aesthetics of the blued hands in most lighting conditions, their shape is somewhat problematic at times. At certain angles, the hands turn black, disappearing into the dial and leaving only the lume visible for telling time. However, the size and shape of the hour and minute lume is rather similar, which reduces instant readability. 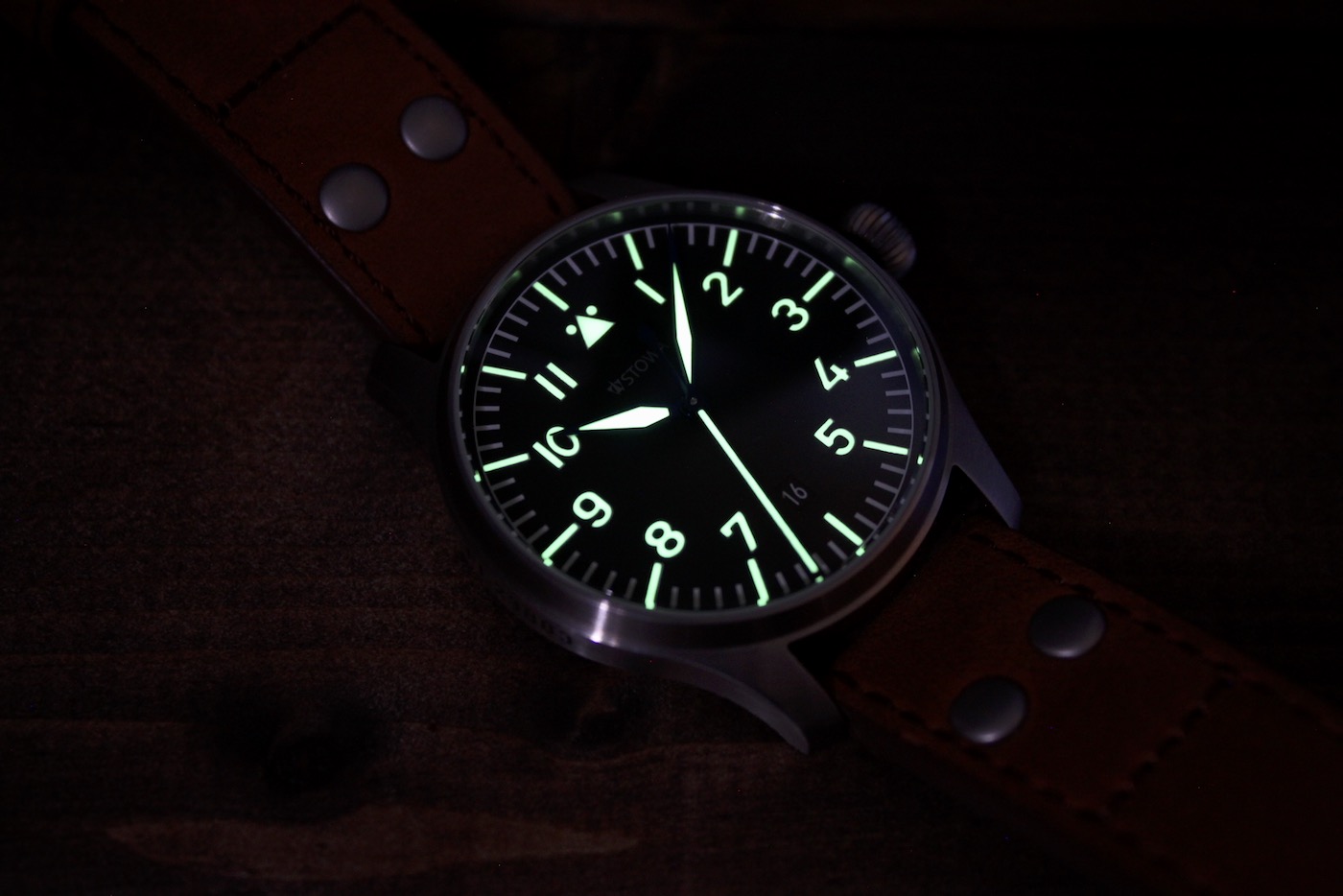 The Stowa Flieger Klassik features a Top Grade ETA 2824-2 movement displayed behind a sapphire caseback. Like every ETA 2824-2 movement, it beats at 28.8kbph and features a 38-hour power reserve. There are a number of differences that set Top Grade ETA movements apart from Standard and Elaboré movements, including the mainspring, hairspring, and pallet stones, but the main advantage is that the Top Grade movement can be adjusted in five positions and has an average deviation of +/- 4 seconds per day. The movement is nicely decorated and a step up, visually, from a standard ETA 2824-2. Stowa also outfits the Flieger Klassik with a custom rotor engraved with details of the watch. It’s a nice touch. 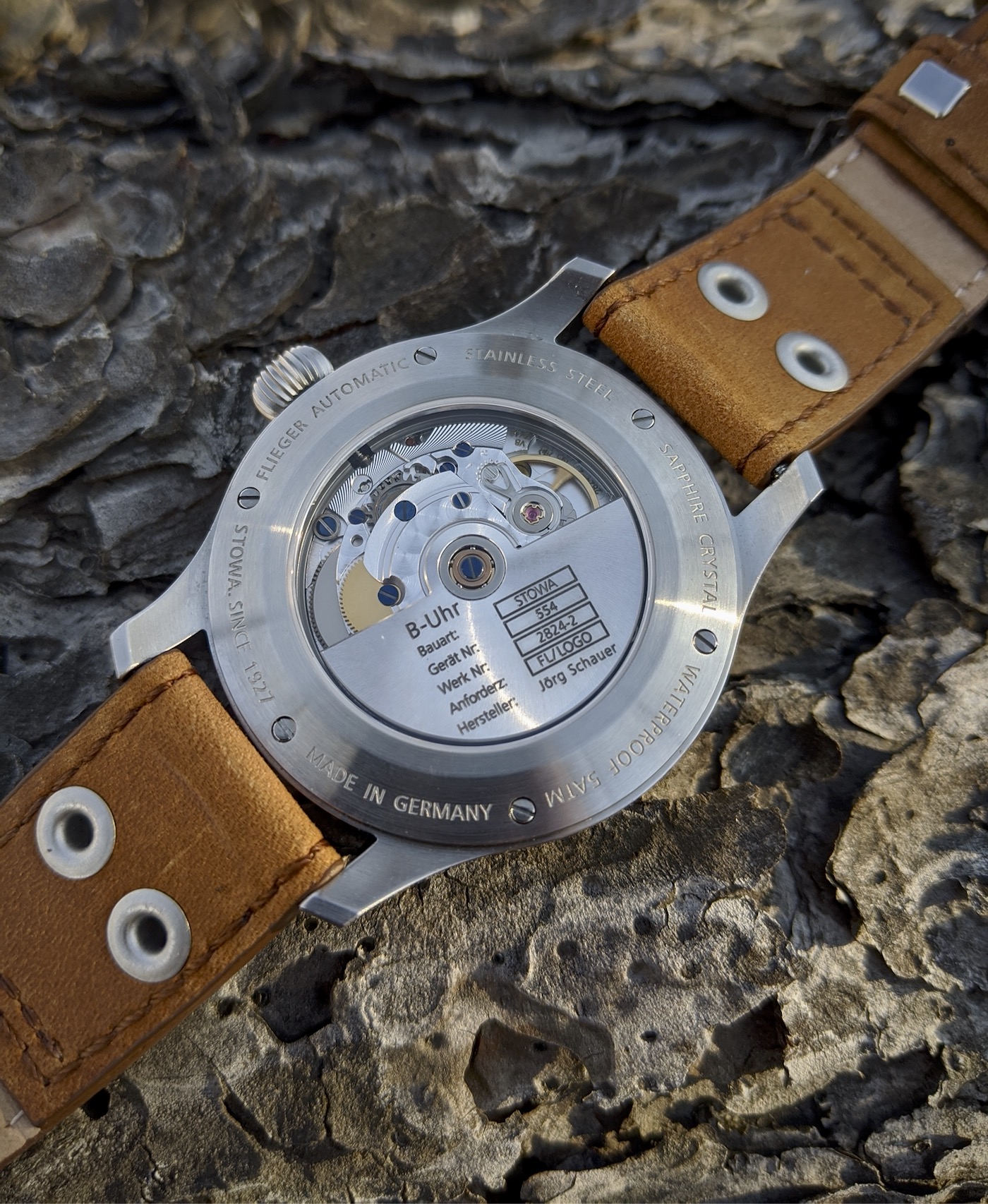 The Stowa Flieger Klassik is available with a range of strap options, but mine came mounted to what I consider the archetypal pairing for a flieger watch — a light brown leather rivet strap. Out of the box, the strap is rather thick and stiff, but it breaks in and conforms to the wrist relatively quickly. I’ve mentioned the price-to-quality ratio of Stowa watches, and the strap is no exception; you can pick up an extra off the website for all of €20. Were I purchasing one myself, I’d be adding the black leather rivet strap to the cart at checkout. For €20, why not? 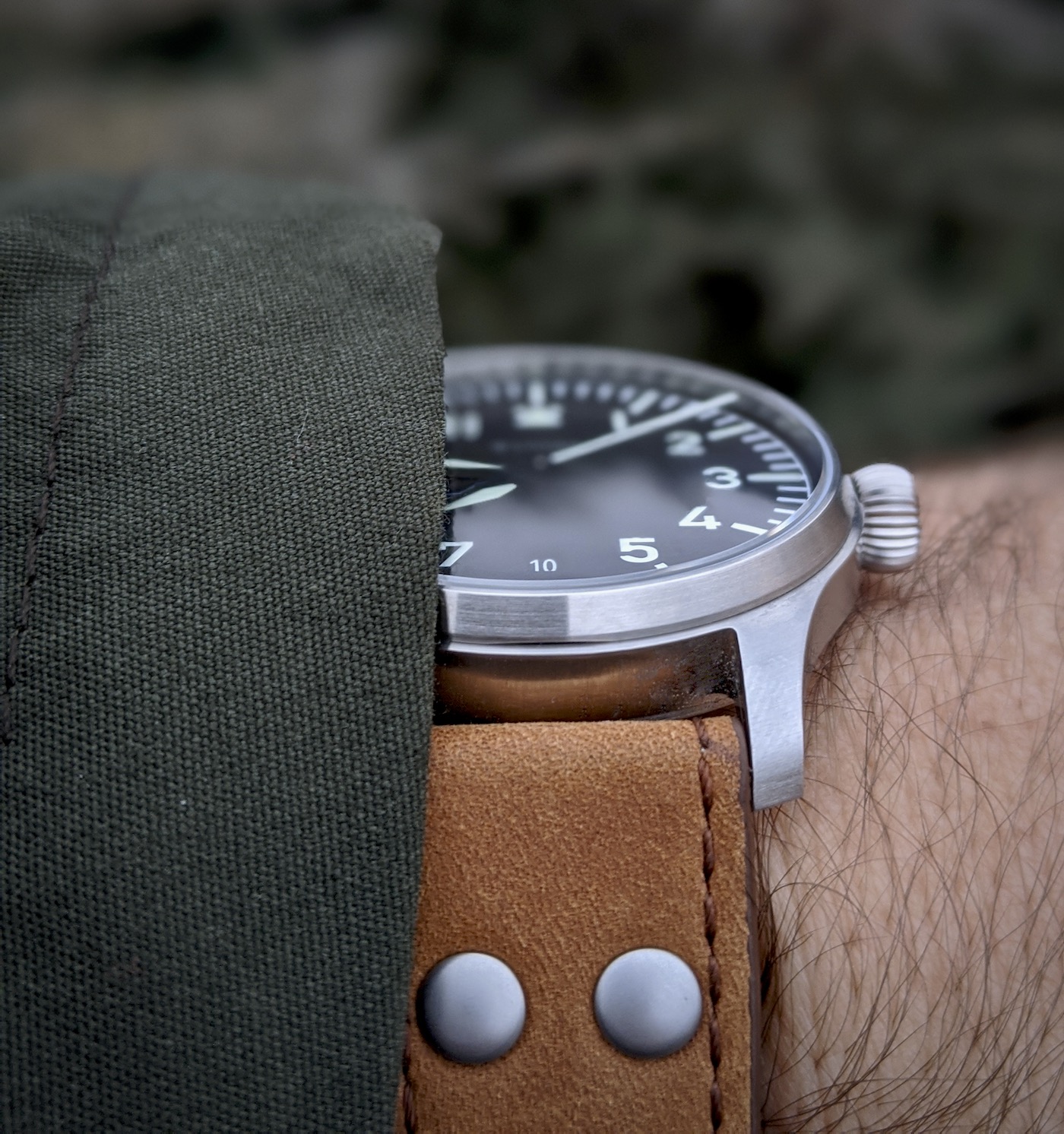 While I do feel that the light brown stock leather strap is the most fitting pairing for this watch? It’s a black dial pilot watch, so it will inevitably look great on a variety of straps, including NATO-style straps that accentuate the military vibe and minimal stitch leather straps for a casual, sophisticated look. My favorite pairing was with a dark green Erika’s Originals Marine Nationale strap — and yes, I recognize the irony of pairing a German flieger with a French MN strap. If you want a bracelet, you’re out of luck unless you opt for a Milanese mesh band. 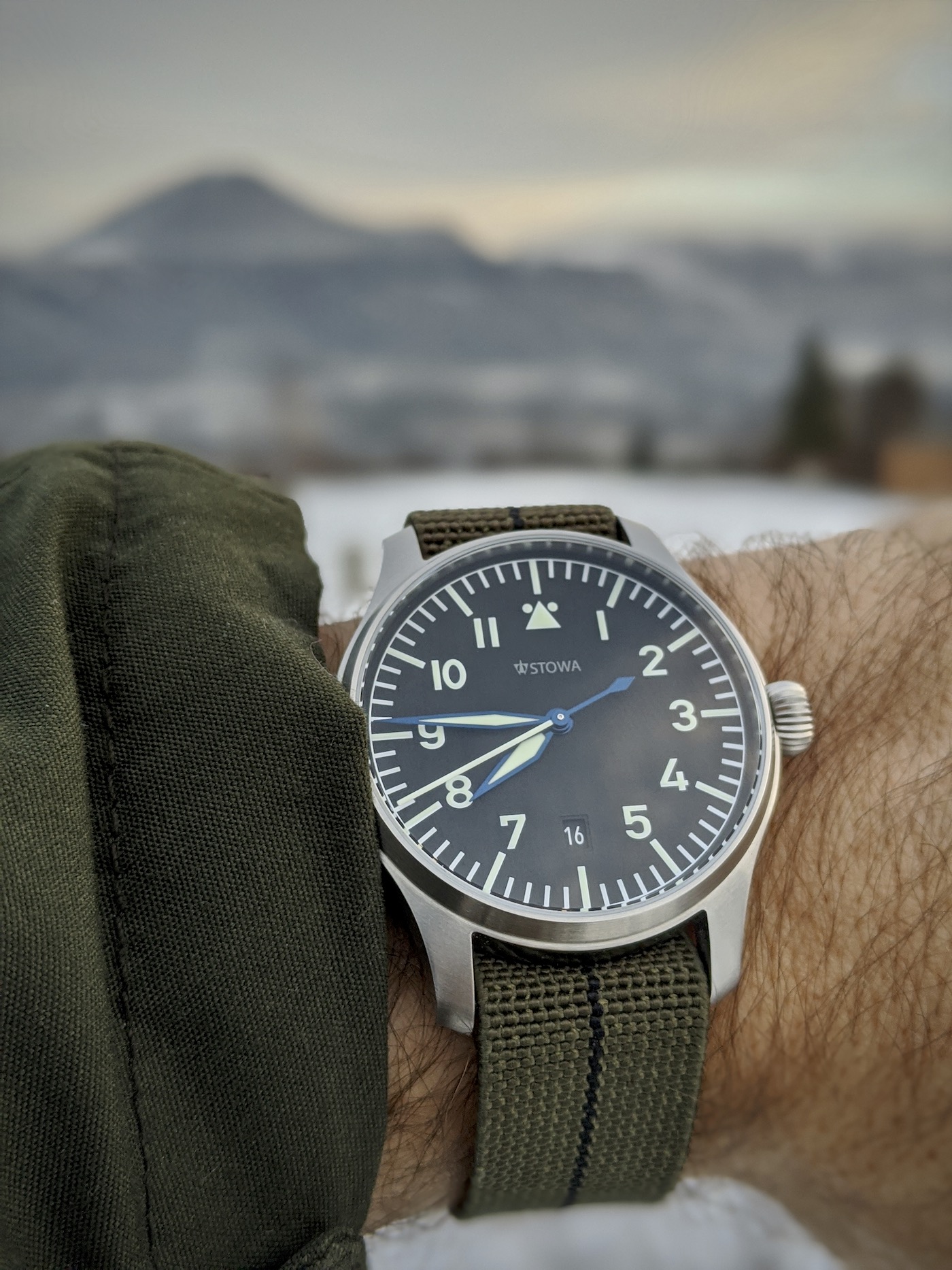 There is no shortage of options if you’re in the market for a flieger, but if you’re interested in an historic link to the past, Laco is the other clear option in the ~$1000 realm. Laco offers a wide range of fliegers in its catalog, but the 39mm $1130 Laco Heidelberg is probably the closest alternative. Whereas the Stowa feels remarkably refined and is clearly a modern watch, despite the Klassik moniker, Laco’s long straight lugs and blasted finish make the watch feel more like an historic artifact. And, if you really want the authentic look, Laco offers a series of flieger watches that go well beyond faux vintage lume and are artificially aged to look as though they just emerged from a rusty ammo box. 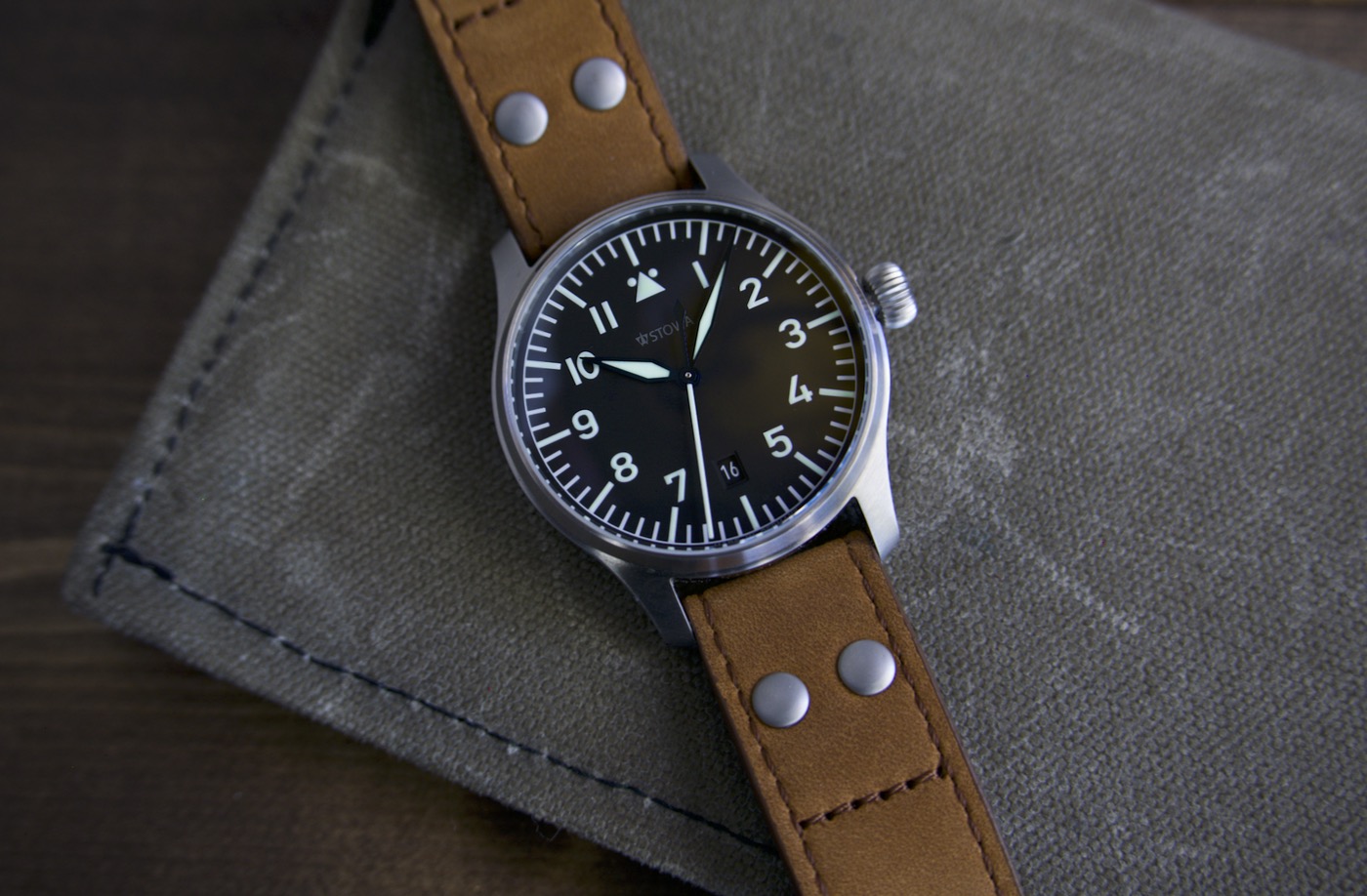 Stowa has a rabid following of fans for good reason — it produces exceptionally well-made watches at an accessible price point. On specs alone, the watch is a great value: top-grade ETA 2824-2 with custom rotor and display caseback, sapphire crystal, thermally blued hands, a beautifully crisp dial, and several customization options. Add to this the fact that the watch is made in Germany from one of the historic producers of flieger watches that is now run by Jörg Schauer and a team that’s known for excellent customer service, and the value proposition is hard to beat. My major gripe is that, after spending a few months with a Stowa Flieger Klassik back on my wrist, my bank account is going to take another hit once my review piece heads back to Germany and I inevitably place an order with Stowa. The Stowa Flieger Klassik 40 is priced at €924.37 excluding VAT, and more information can be found at www.stowa.de.