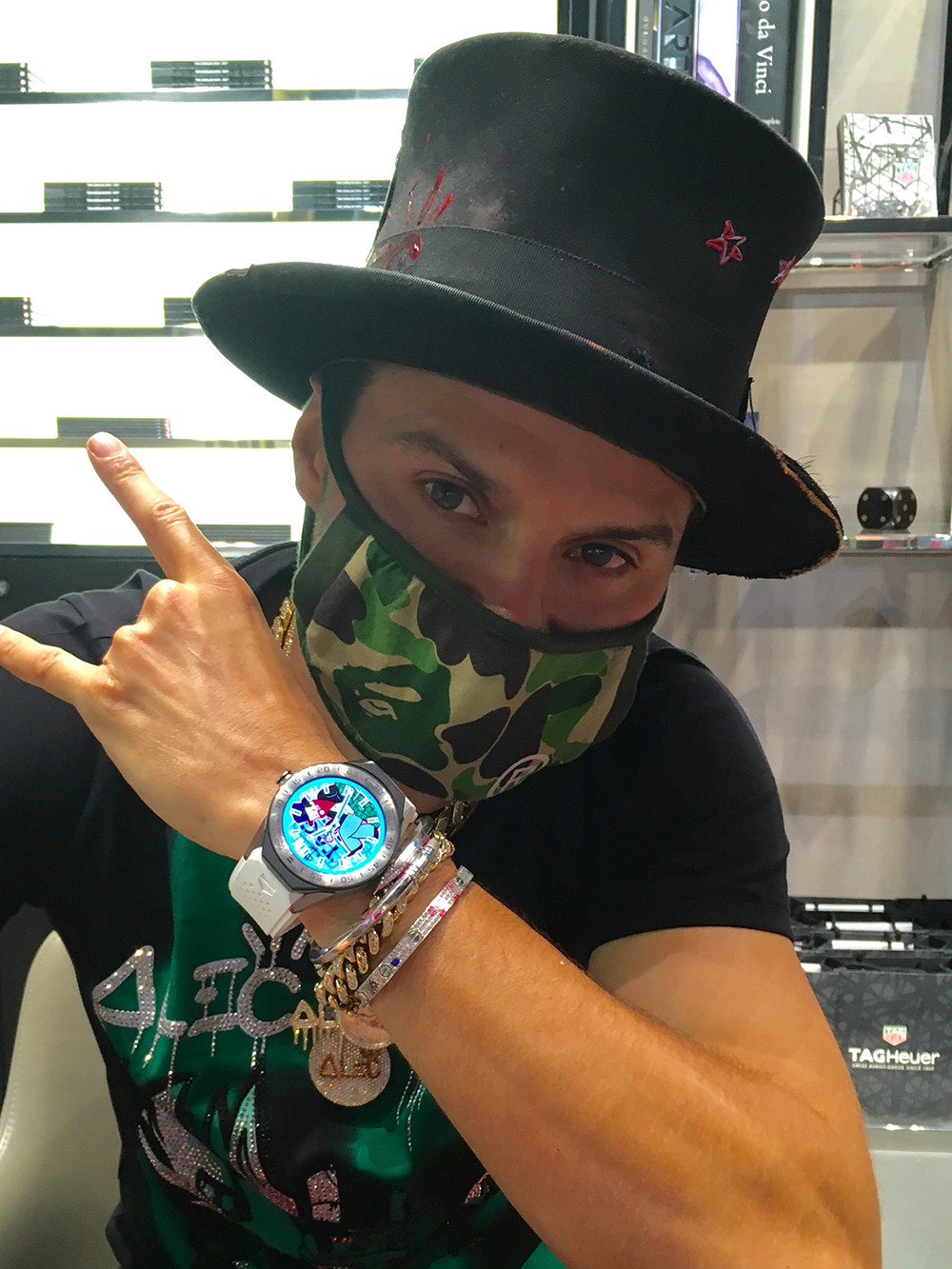 Graffiti artist Alec Monopoly (whose real name is Alec Andon) made another appearance on behalf of TAG Heuer this year at Art Basel Miami, this time with a special edition of the TAG Heuer Carrera Connected Modular 45 Watch, with a digital reproduction of one of the artist’s paintings on the screen. The 300-piece limited edition was unveiled at a boutique party in Miami, where Monopoly put the finishing touches on the custom painted straps. 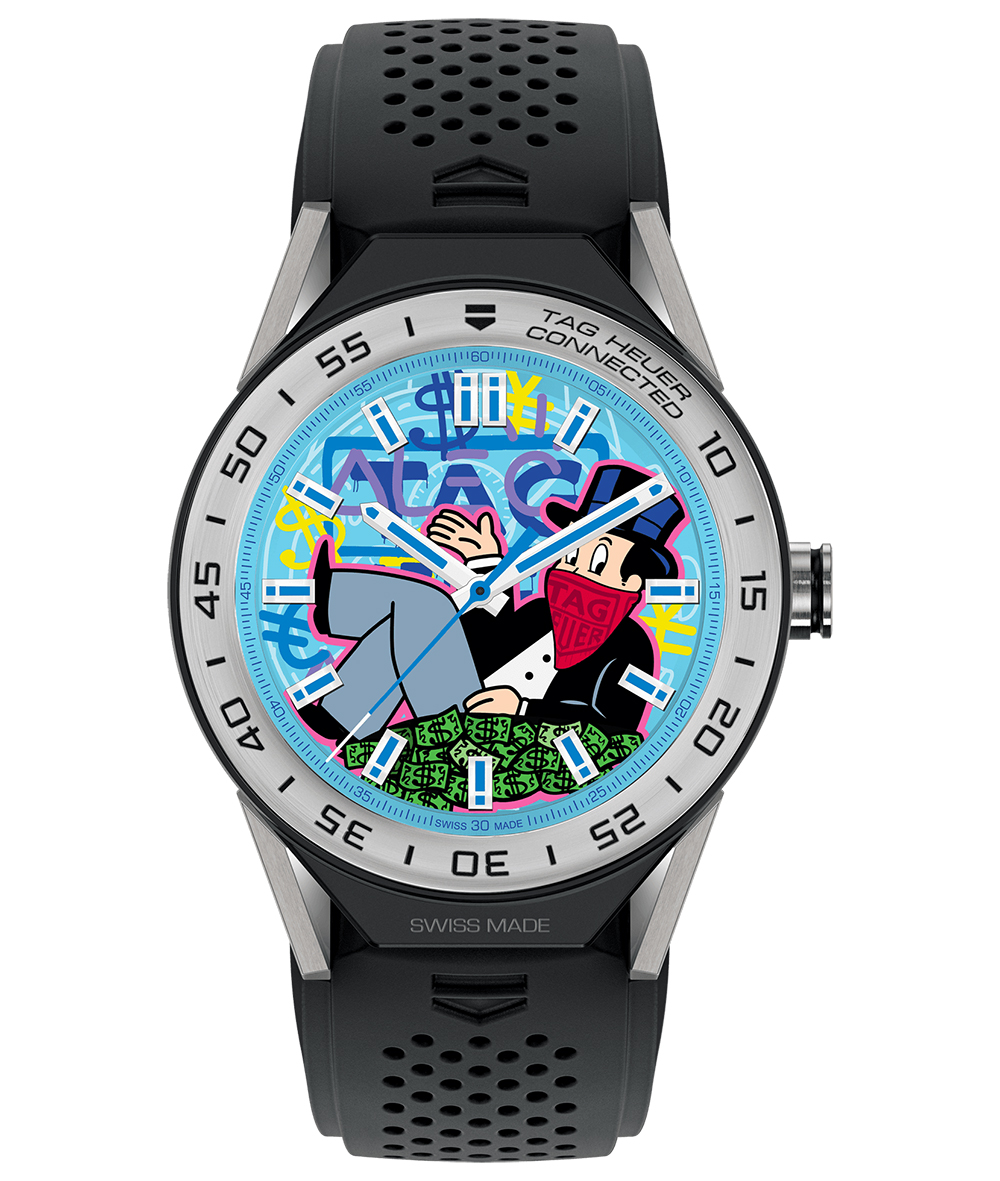 The watch is a special version of TAG’s Connected Modular 45 watch, distinctive because it takes the shape of a round mechanical watch with a 45mm case. It is an android-powered smartwatch, with a crown that acts as the control center. The screen of the new special edition Alec Monopoly watch is a digital rendering of a painting by the artist. The white rubber straps on each version of the special edition are hand painted by Alec Monopoly, and each is one-of-a-kind. The straps, all 300 of them, were mounted side by side on a large board at the party, where the artist finished painting them all at once, using a technique that involves applying spray paint in splatters. “I experimented with a lot of different paints, and I found spray paint is the best because it is conditioned to work outside in the rain or snow, and on different surfaces,” says Monopoly. “I started them in my studio where no one was around and will finish them off tonight,” he said in an interview just before the party at the TAG boutique in Miami’s Design District. 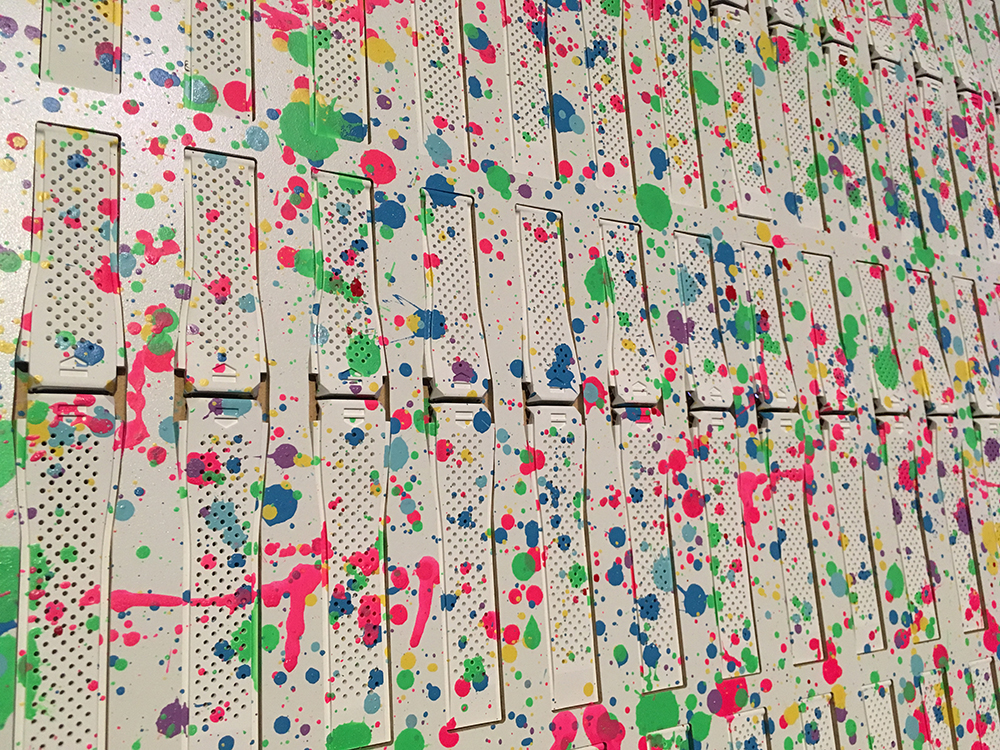 The wall of straps: Each strap on the Alec Monopoly CM45 special edition has one of these straps, painted by the artist. 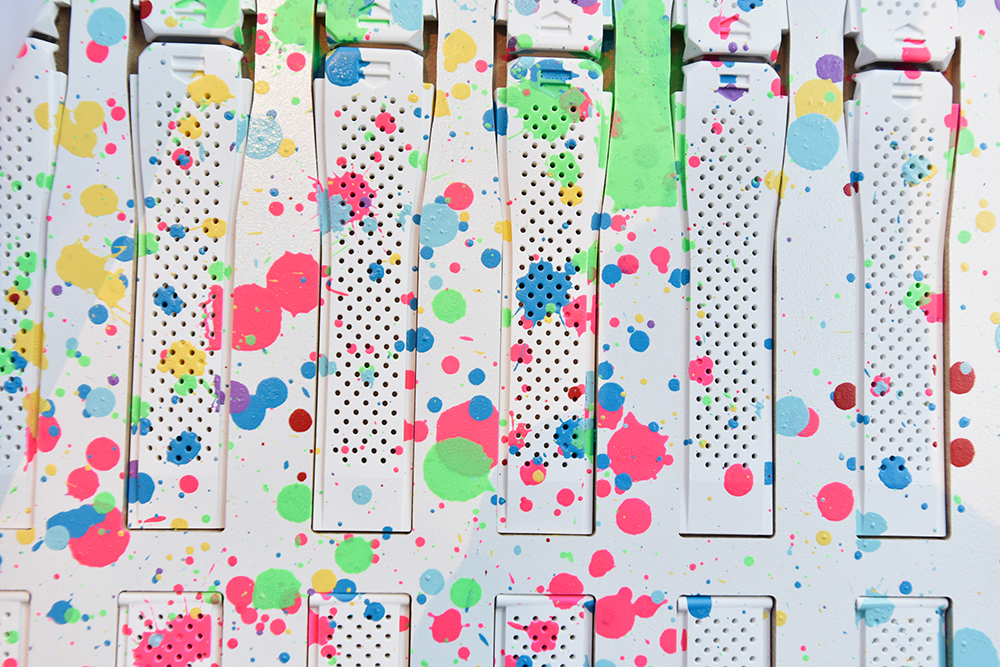 The CM45 Watch watch has a 1GB main memory, 4GB of storage, and 25 hours of battery life. This is the first watch collaboration with the artist in the North American market. Earlier this year, Monopoly collaborated with TAG Heuer for a special edition Formula 1 piece sold exclusively by a Mexico retailer. 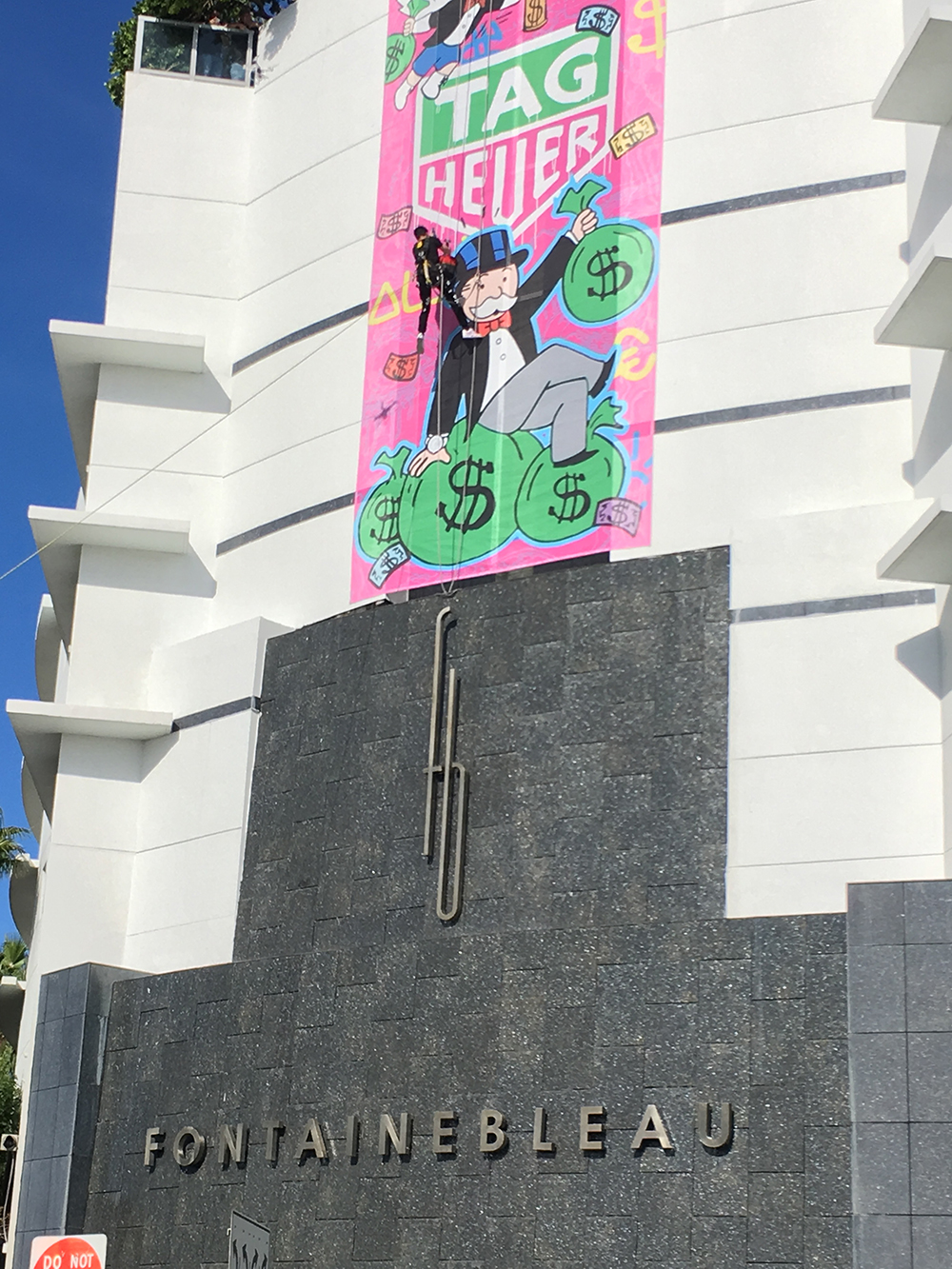 Alec Monopoly straddles the side wall of the Fontainbleau Hotel in Miami to complete a mural.

Alec Monopoly is also part performance artist. The day after the launch party, he scaled a 40-foot wall at the Fontainebleau Hotel and put the finishing touches on a mural depicting his iconic character, Mr. Monopoly, also known as Rich Uncle Pennybags, from the Monopoly game. 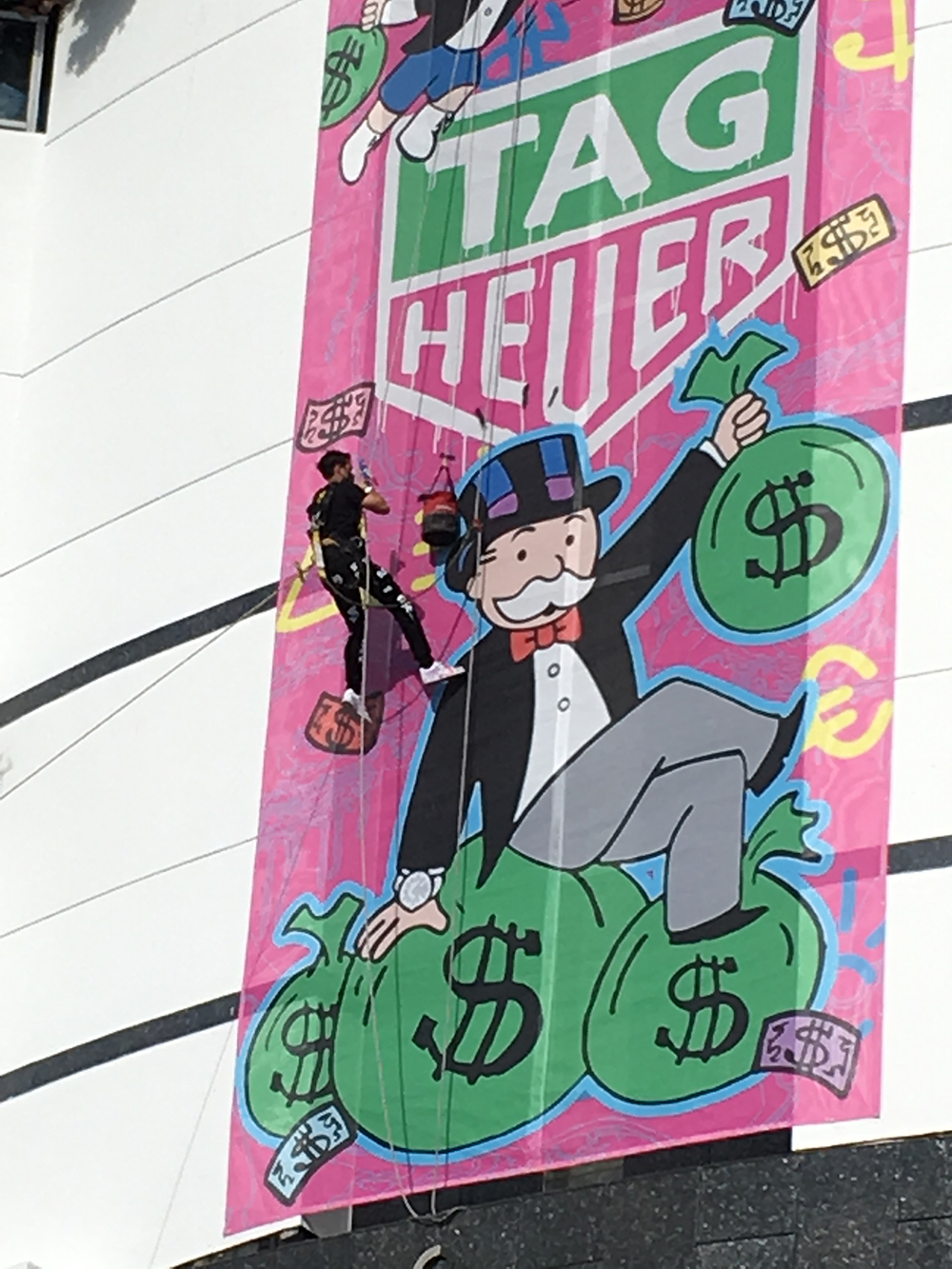 Part of the artist’s role as a TAG Heuer ambassador is to create original paintings to be hung in the brand’s boutiques around the world and to design other marketing materials. During the celebrations in Miami, he also unveiled a sculpture exclusively for TAG Heuer, which will be auctioned for charity. A studio has been set up for him at TAG Heuer’s manufacture in La Chaux-de-Fonds, where he will create some of the paintings. Monopoly is famous for wearing a bandana on his face to protect his identity. “It’s part of graffiti culture to remain anonymous so you can continue painting,” says Monopoly, who points out that “tagging is not legal.” The artist has progressed beyond graffiti to paintings, which are exhibited in galleries in New York, his hometown, as well as Miami. 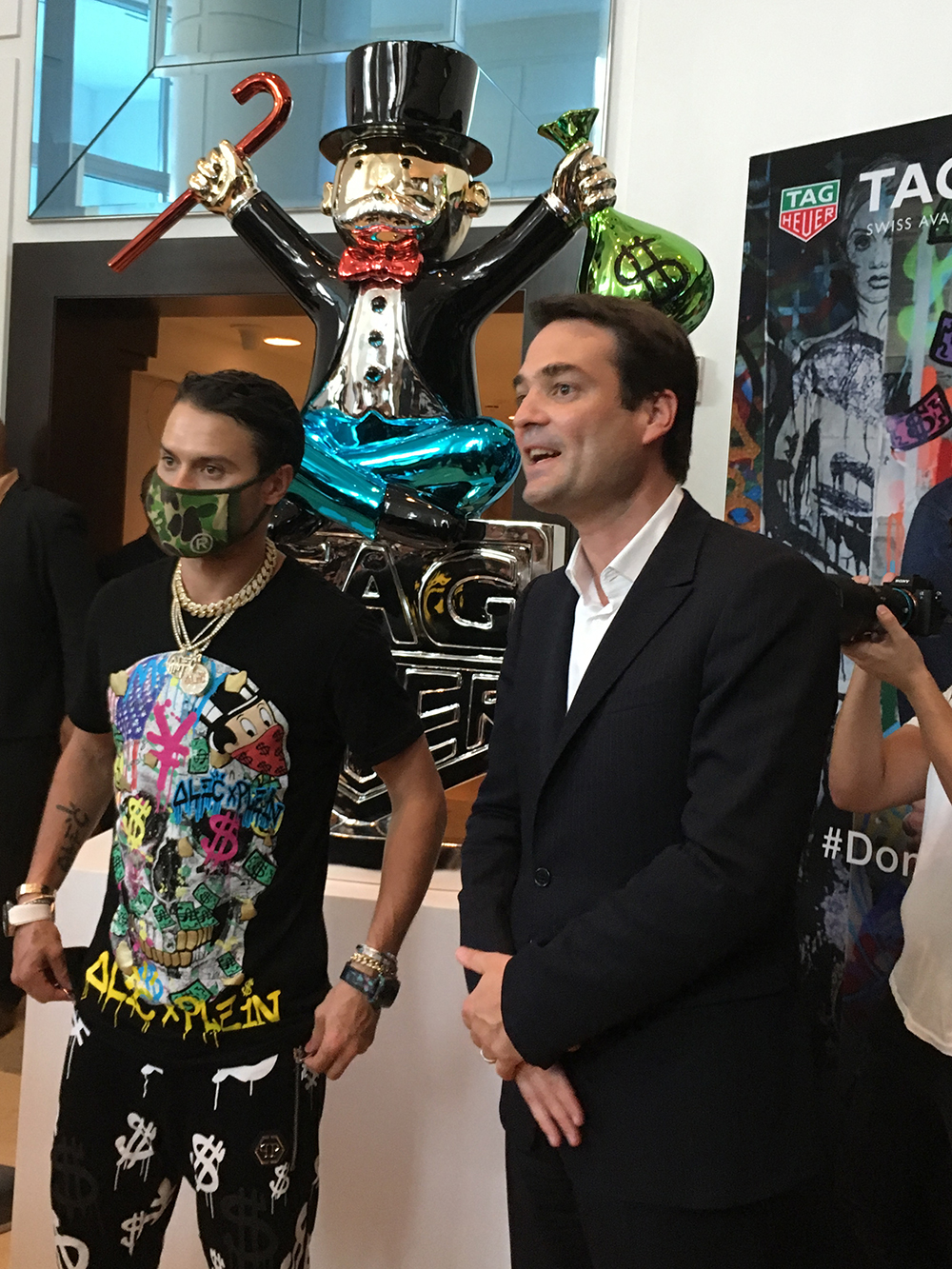 The artist unveiling a sculpture for TAG Heuer, with the brand’s North American president Kilian Muller.

The artist was hired by TAG Heuer after CEO Jean-Claude Biver sought advice three years ago from his then 14-year-old son, Pierre. “I asked him how I could connect with the new generation,” says Biver. “He told me I should work with Cara Delevingne (who is also now a TAG Heuer ambassador) and Alec Monopoly. His son connected him to Monopoly’s Instagram address, Biver became a follower, then a fan, and eventually approached him to buy some of his work. “The more I went on Instagram, the more I saw that he had a lot of influence on this younger generation – and I started to like his art,” says Biver. “I even bought a painting for my son, to thank him.”

The Alec Monopoly special edition is available on the TAG Heuer e-shop and retails for $1,850. tagheuer.com