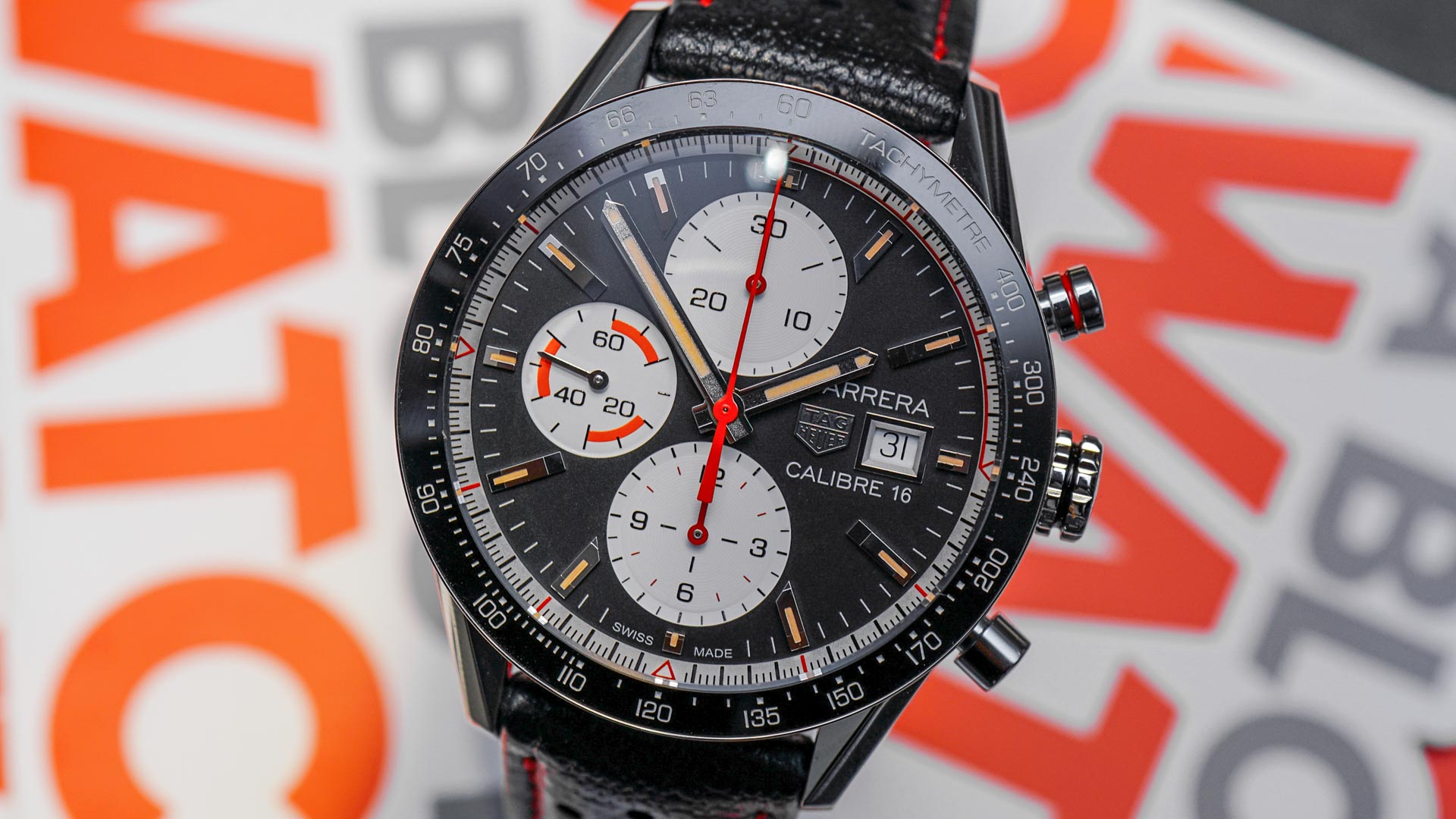 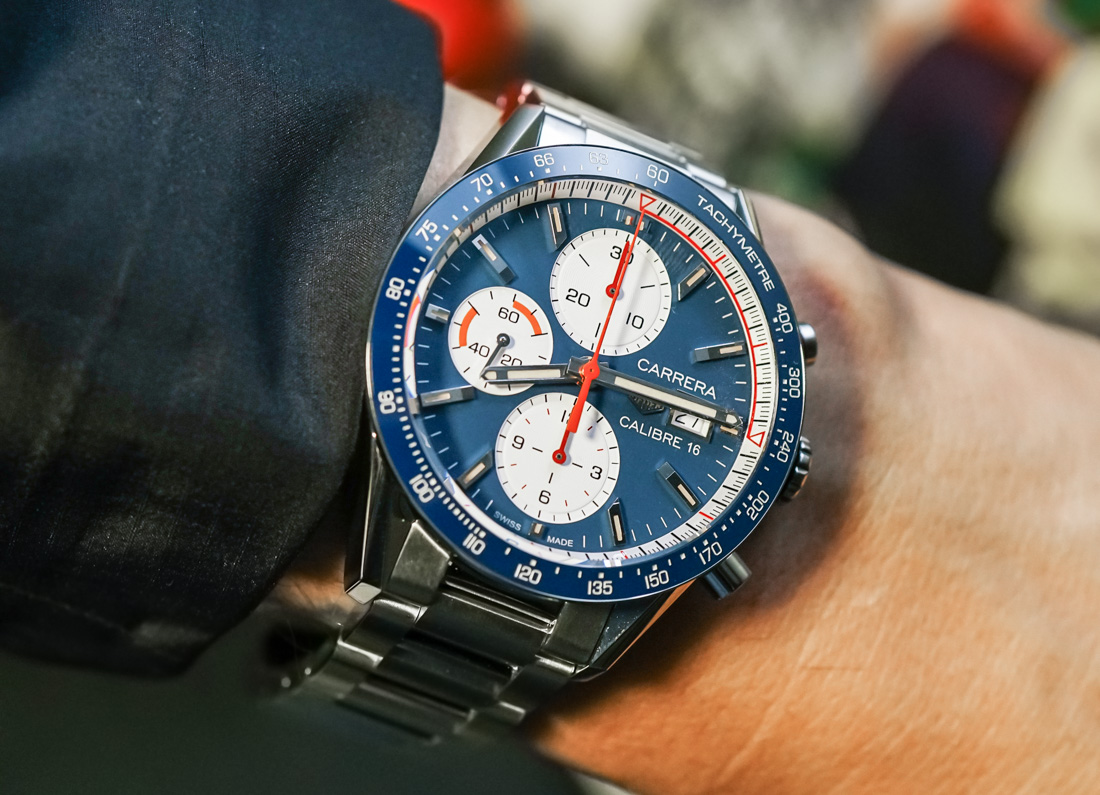 A 55 year anniversary isn’t traditionally celebrated in a sense, but that hasn’t stopped TAG Heuer from using it to commemorate the latest addition to what is arguably the motorsport watch of the 20th century, and the brand’s most historically significant collection: the Carrera. But don’t get too hung up on the significance of the anniversary, as this TAG Heuer Carrera Calibre 16 Chronograph is absolutely a release worth paying attention to, and one of our favorite sport watches on the show floor thus far. 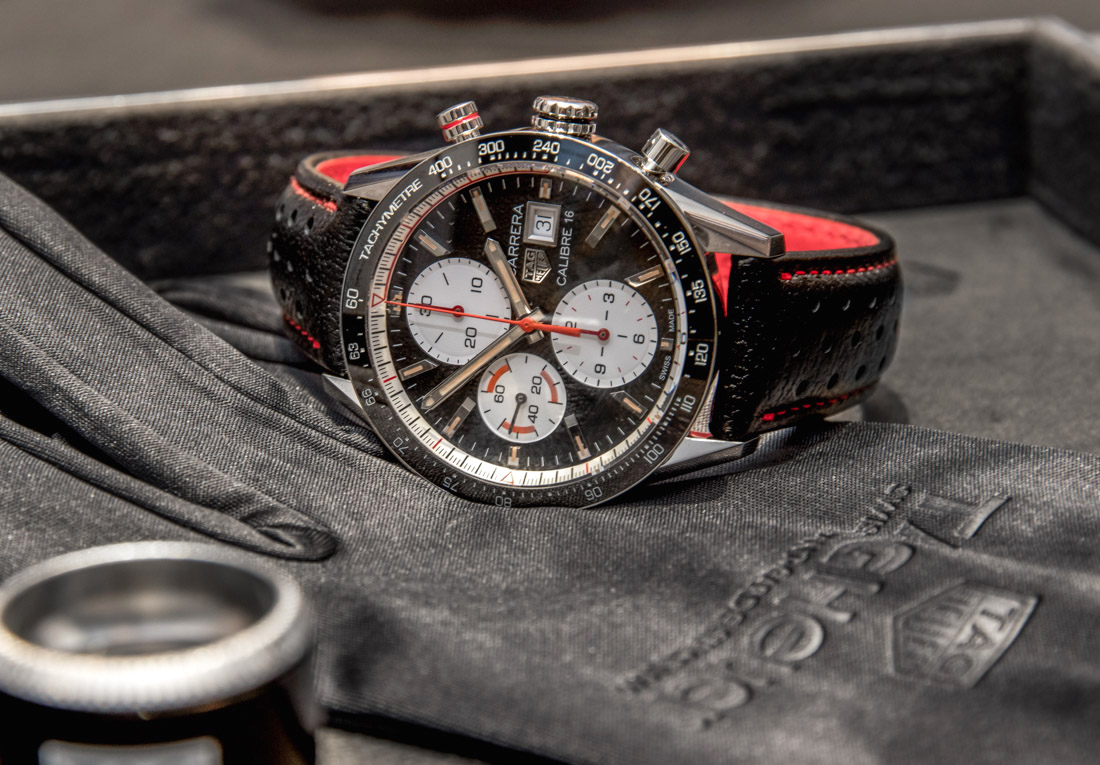 Now, might as well just get all the usual applicable cliches out of the way right now, as there are certainly several that apply on the 55th Anniversary Carrera. Stuff like “pictures do not do it justice,” “wears smaller than the specs suggest,” and the classic “punches well above its weight,” all work well here. Particularly with the latter, as many of TAG Heuer’s modern cases exhibit cool textures, bevels, and contrasting finishes that aren’t often seen around this price point, and are always best appreciated in-hand. It’s all done on a slightly more subtle degree than the more assertive Cal. 16 Carrera Day/Date, which not only wears large for its 43mm spec, but is also a touch too busy for many preferences. 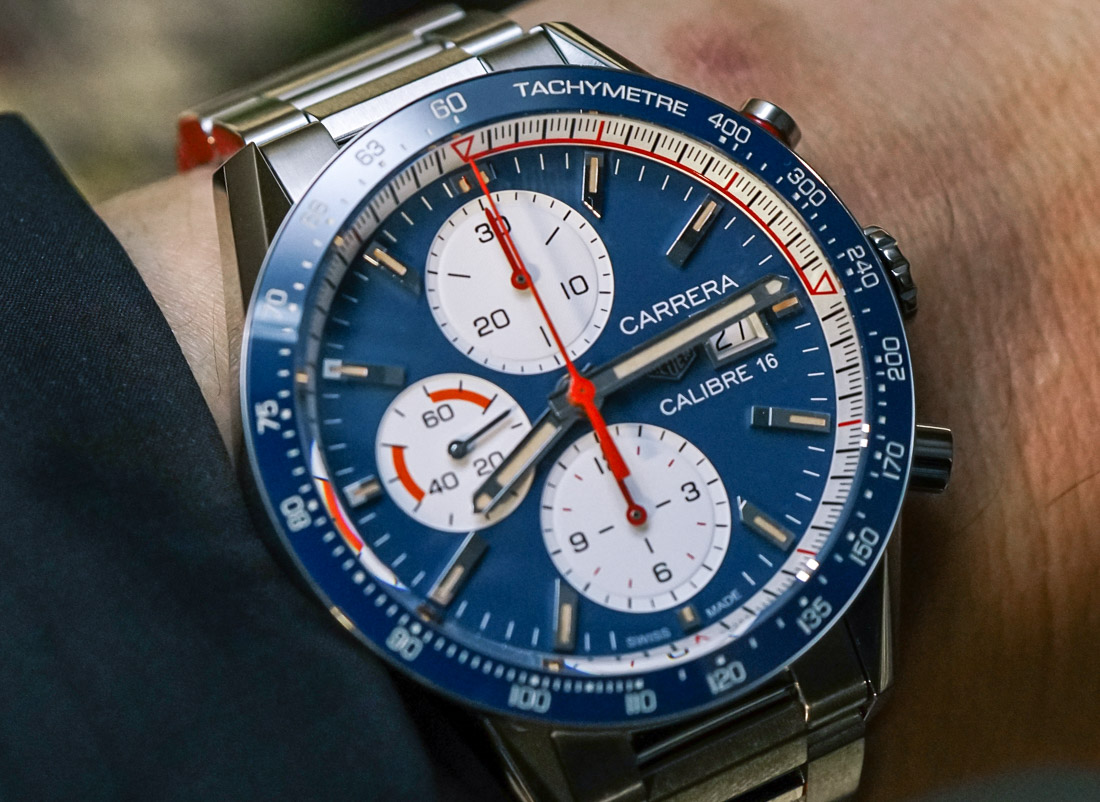 Then there’s the size – at 41mm, its relatively short lug-to-lug measurements and thin silhouette are everything we wished 2017’s Heritage Autavia was. Lastly, while price will always remain as subjective as it is contentious, $4,350 gets you all the external trimmings, but still a full $1,000 less than the aforementioned Autavia, which came equipped with an in-house manufactured Heuer 01 chronograph movement. The Calibre 16 might not come with the same in-house cachet, but has long been a proven and extremely successful ETA 7750 clone, so there’s that. 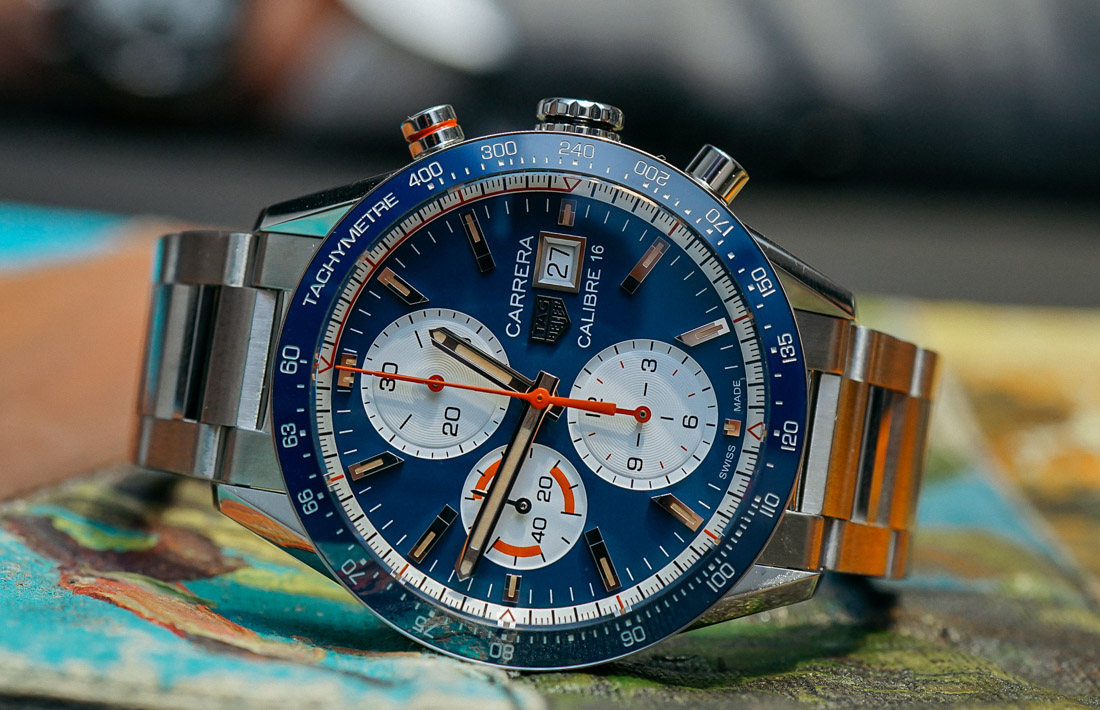 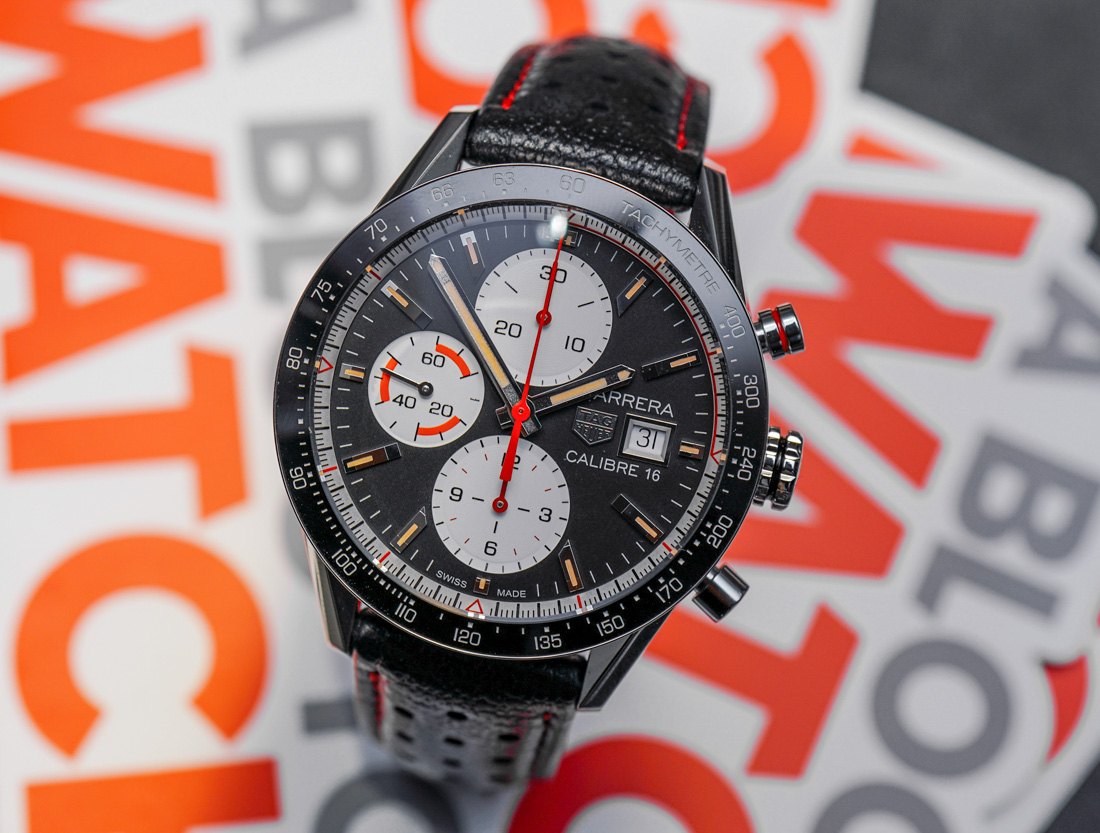 Clad in matte blue or black, with contrasting white subdials, cream-colored luminous indices, and either red or orange accents, the 55th Anniversary Carrera breaks a certain “three-color” rule, but disarmingly so – after all, rules are meant to be broken, right? It just works here – and like the Tudor Heritage Chronograph from 2013, it’s an undeniable charmer, but far more comfortable on the wrist. It’s the type of watch that just begs for a little customization in the form of a chocolate brown Barena leather strap, or dressed down in something a little lighter – like a caramel-colored nubuck with tonal stitching. 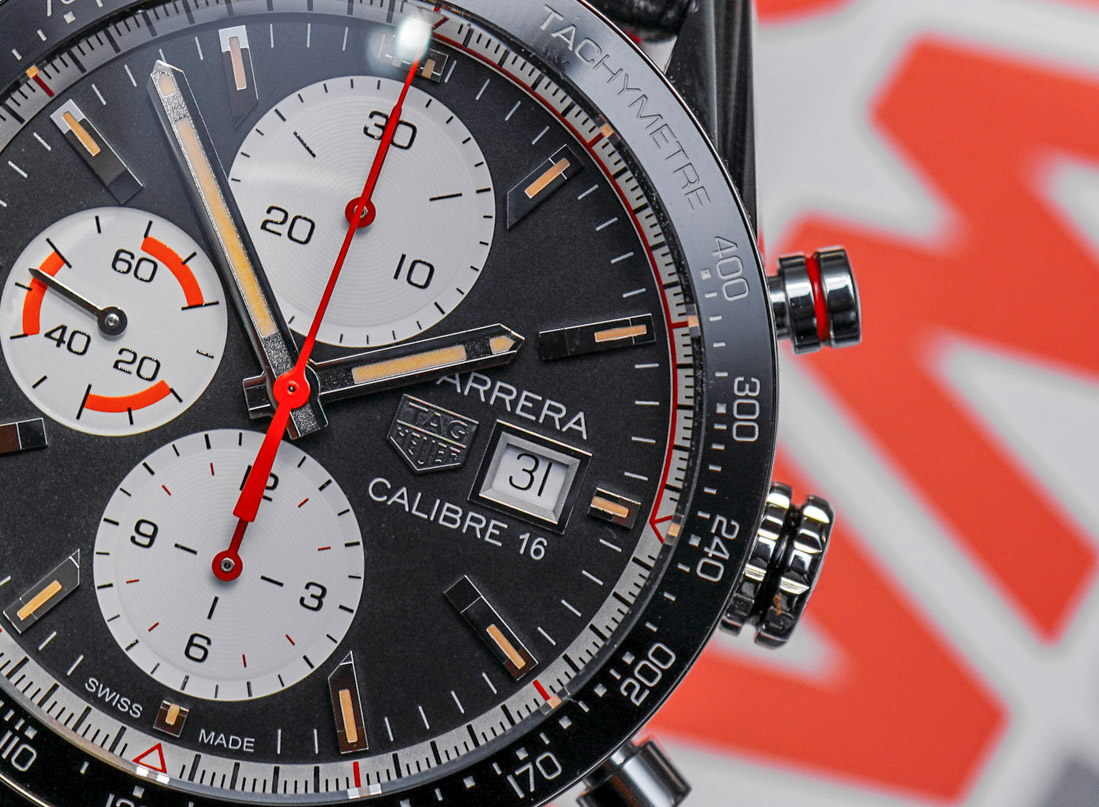 The end result is a youthful, albeit highly wearable sport watch that doesn’t adhere to the codes of its vintage source material too seriously, making it a very smart contrast to the busy, ultra-modern Cal. 16 Carrera currently on offer. It’s also a nice compromise between the aforementioned, and last year’s Autavia, which ultimately felt a little sober as it channeled a more serious vintage aesthetic. But similar to the broad appeal and consequent rapid growth of the modern Aquaracer collection, gambling on the this Anniversary Carrera Cal. 16 edition as a potential offshoot would be a good one. 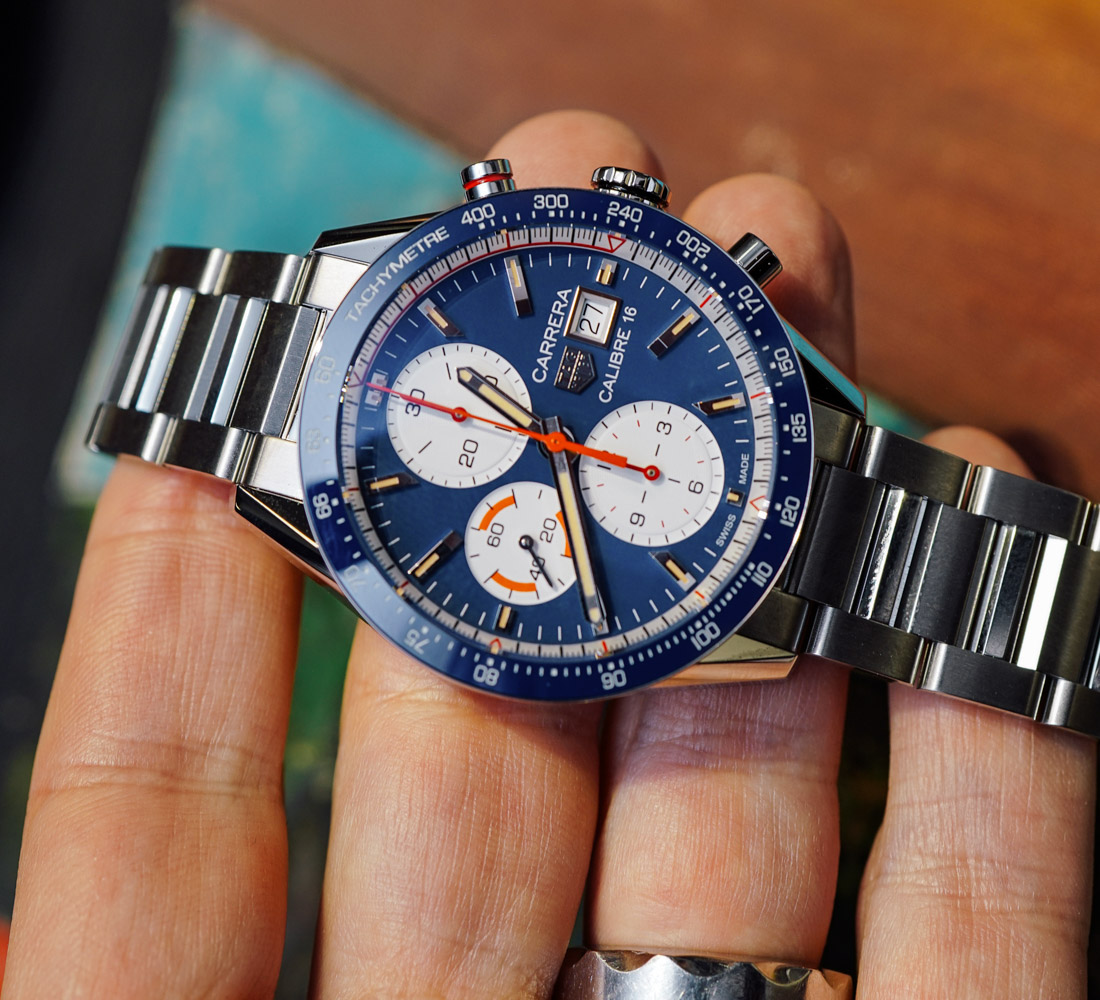 As mentioned, the TAG Heuer 55th Anniversary Carrera Cal. 16 starts at $4,350 on a perforated ‘rally style’ leather strap, and jumps to $4,500 on the three-link bracelet. tagheuer.com