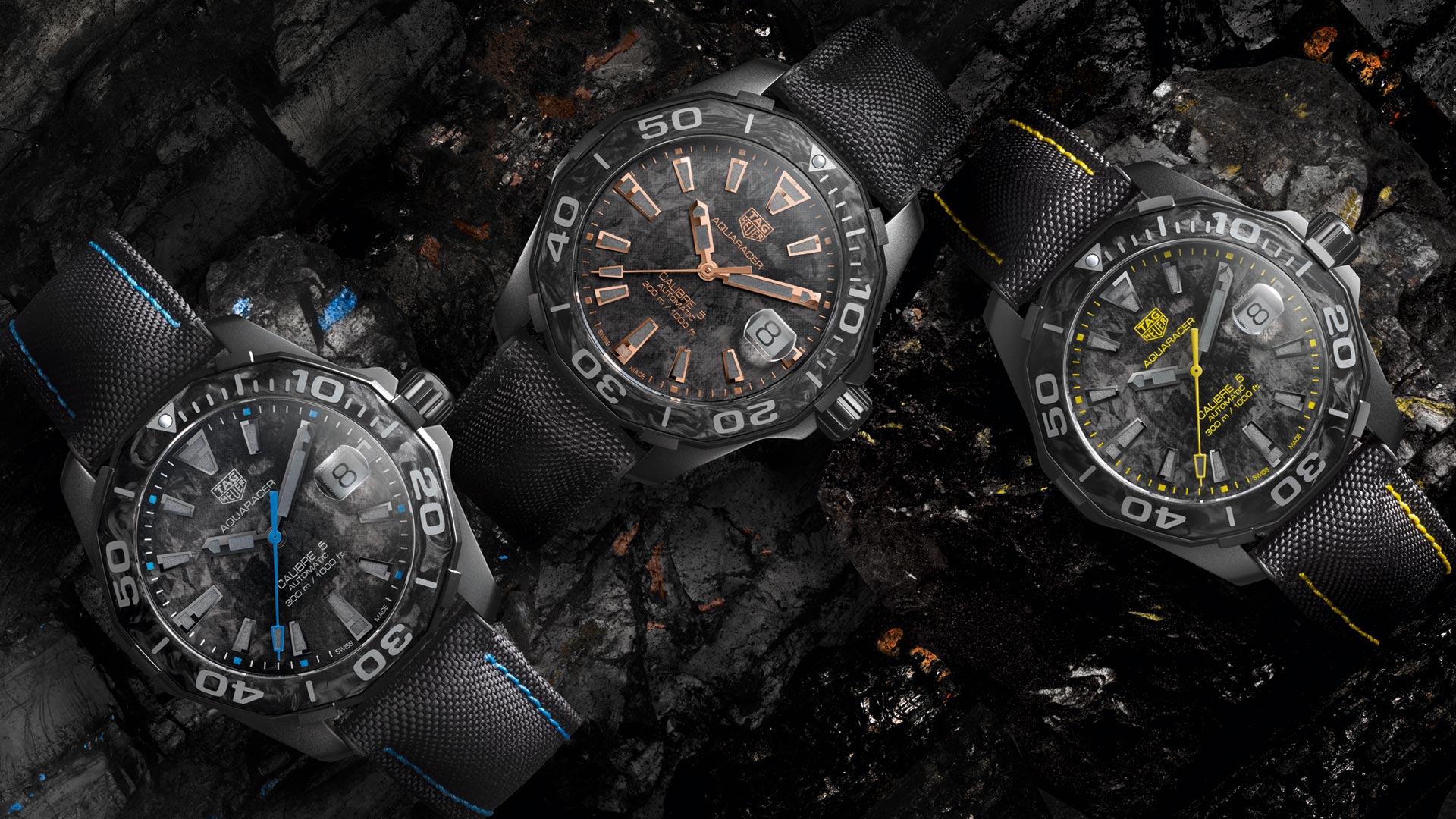 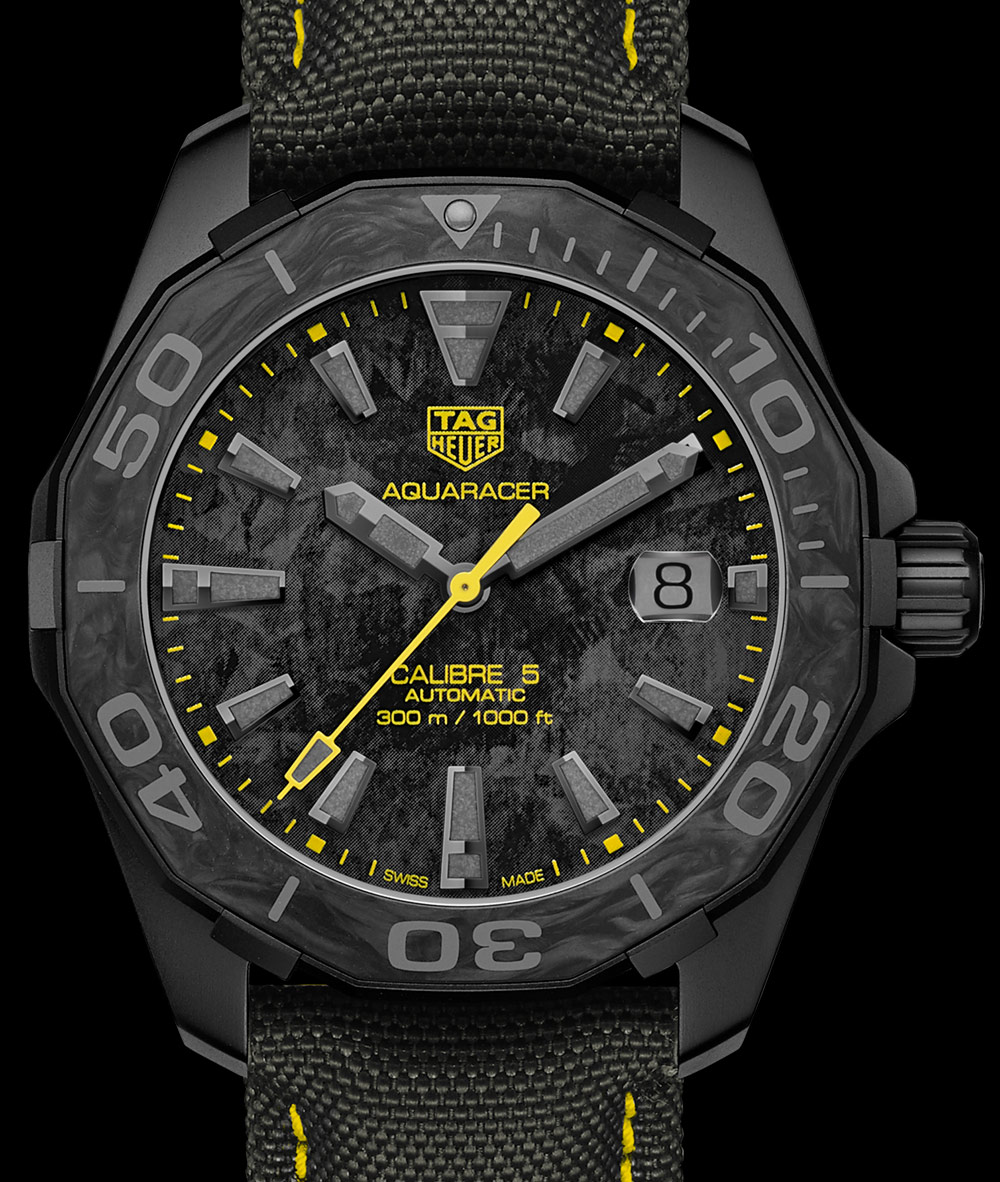 Forget everything you think you know about watches, close your eyes for a minute, then look at the new TAG Heuer Aquaracer Carbon and ask yourself, simply, “does it look cool?” Regardless of your answer, for a brief moment you were perhaps able to experience the viewpoint of the TAG Heuer Aquaracer Carbon’s apparent target audience. Perhaps not. Looking cool and fashionable, as it certainly does, seem to be given precedence over legibility and the presence of actual carbon that the name and look of the watches suggest. Carbon can be found here and there in small amounts, but this titanium-cased watch is more about the “carbon look.” 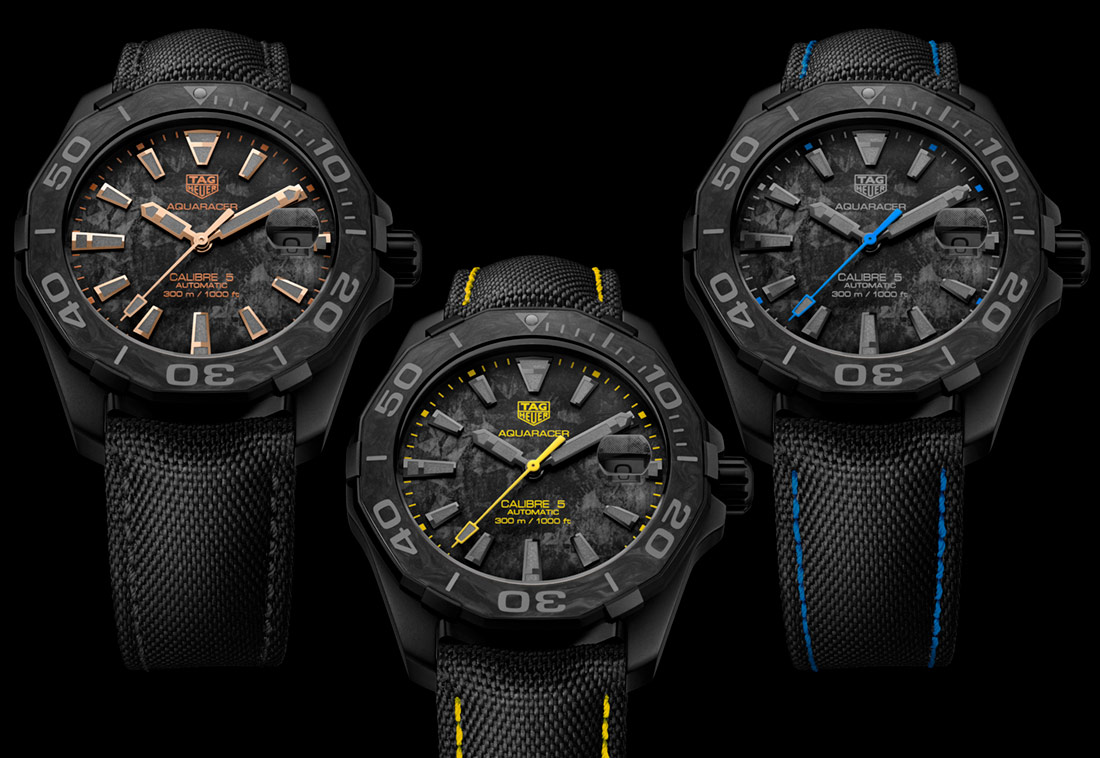 The TAG Heuer Aquaracer Carbon watches, the brand says, are inspired by the recent TAG Heuer Monaco Bamford watch (hands-on) and are part of a series we can expect to see expanded over the coming months. While thematically following the $8,100 Monaco’s lead, these Aquaracers are significantly less expensive for a few reasons, but one is the case material. Whereas the Monaco Bamford has a case made of forged carbon, the only actual such material used for the TAG Heuer Aquaracer Carbon is in the bezel. I believe it is the bezel insert that is carbon, whereas the bezel itself is steel with a matte black PVD coating. The carbon “theme,” however, extends to other elements of the watch’s design and finishing. 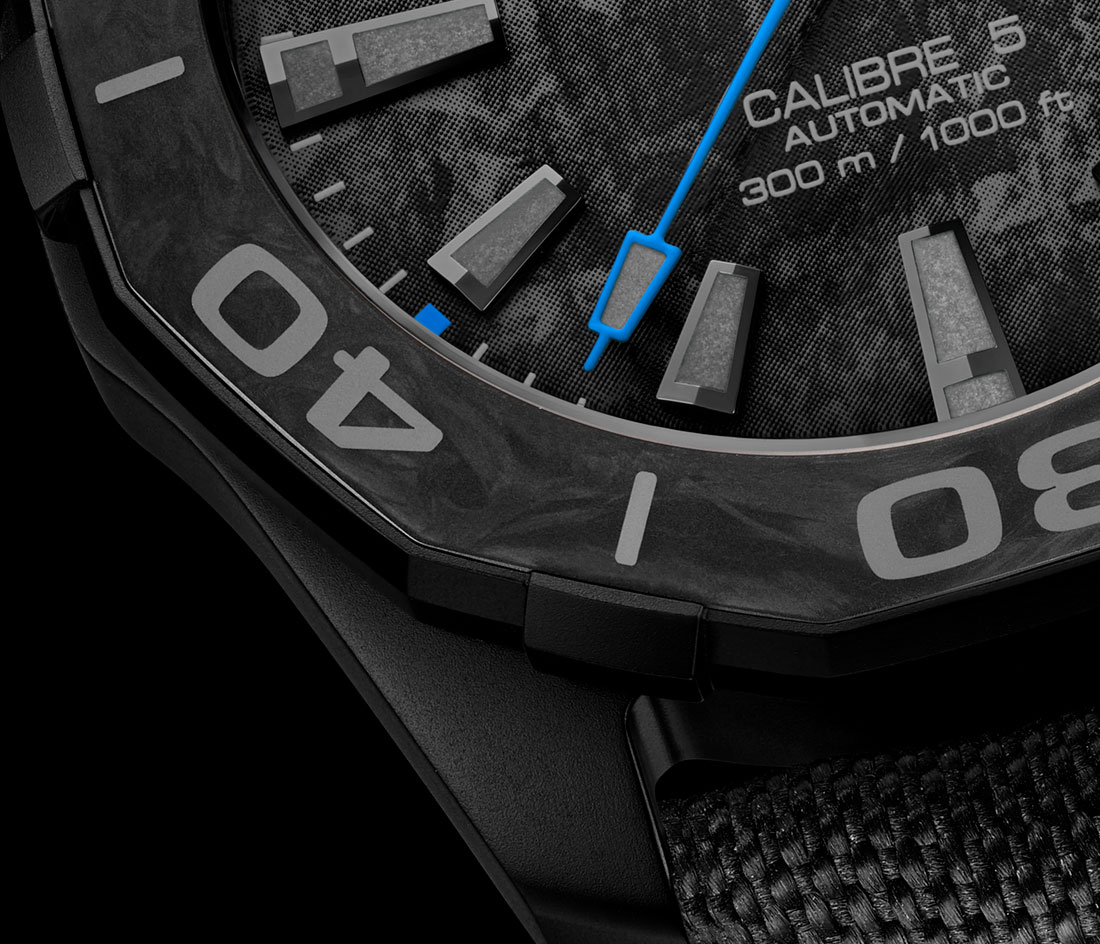 Like the black Aquaracer models we saw hands-on here in 2016, these new models have 41mm-wide grade 5 titanium cases with matte black PVD coating. Titanium and carbon are both very light materials, so at a glance or even picking it up, one could be forgiven for assuming that the TAG Heuer Aquaracer Carbon is actually made from carbon – titanium is a fine watchmaking material, of course, but the name and look could be misleading. The dial’s “imitation carbon effect” (TAG’s words) is achieved by the “random injection of carbon fibres into a resin pressed at high temperatures.” So I guess there is some actual carbon in there after all. It’s hard to tell from the brand’s images here, but the dials appear to have a neat-looking matte texture somewhat like cloth. 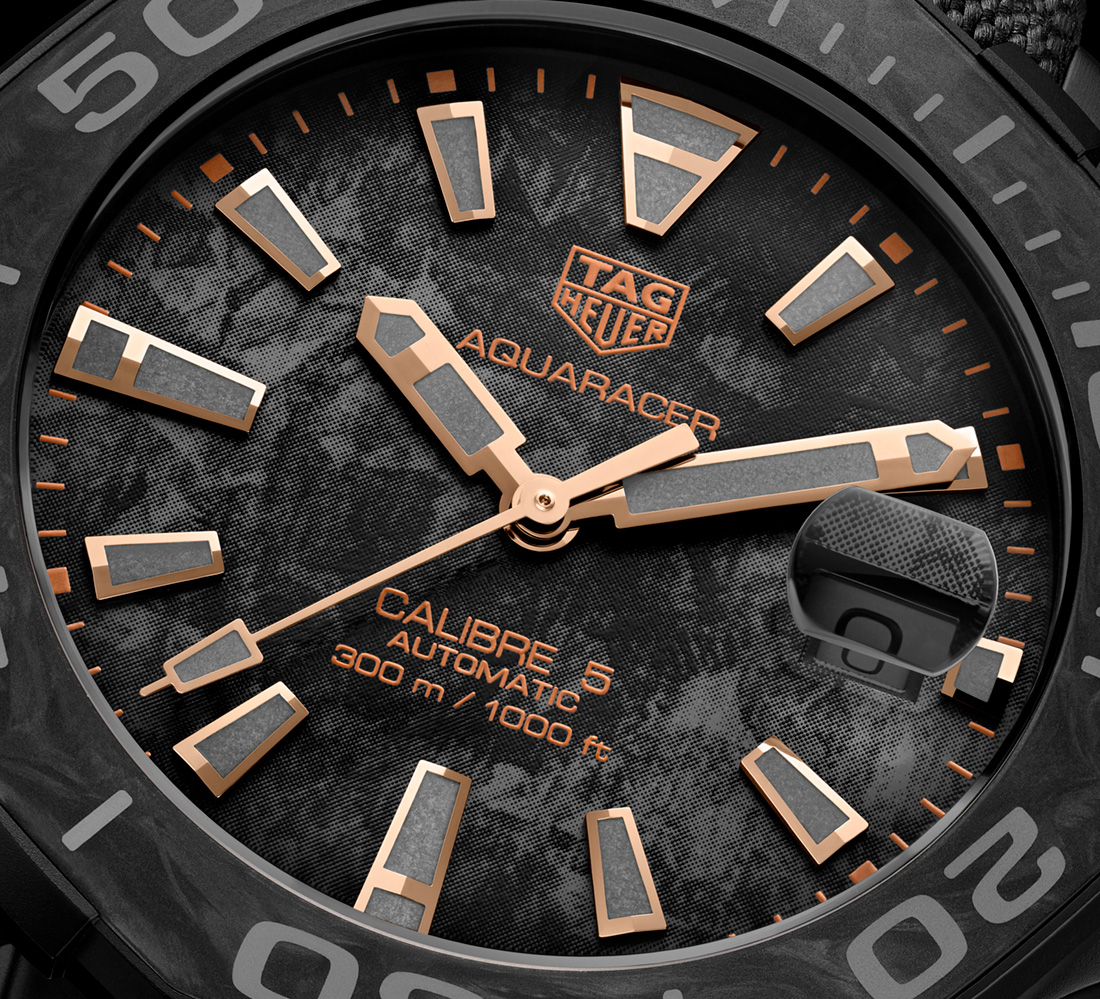 I’d like to congratulate TAG Heuer on the relative legibility of the model with reasonably contrasting rose gold highlights (ref. WBD218A.FC6445). The seconds hand on all three models also appears very legible. Driving home the fashion-first point, the hands and markers of the blue- and yellow-highlighted versions (WBD218C.FC6447 and WBD218B.FC6446, respectively) are PVD “black gold” against a the carbon motif background – that is, black on black. They are filled with grey Super-LumiNova, which is known to have a subdued glow in comparison with the white/blue/green lume often used on dive watches. Who knows, maybe we will be surprised by the dials’ legibility in person. At least the TAG Heuer logo and other text should be very easy to see. 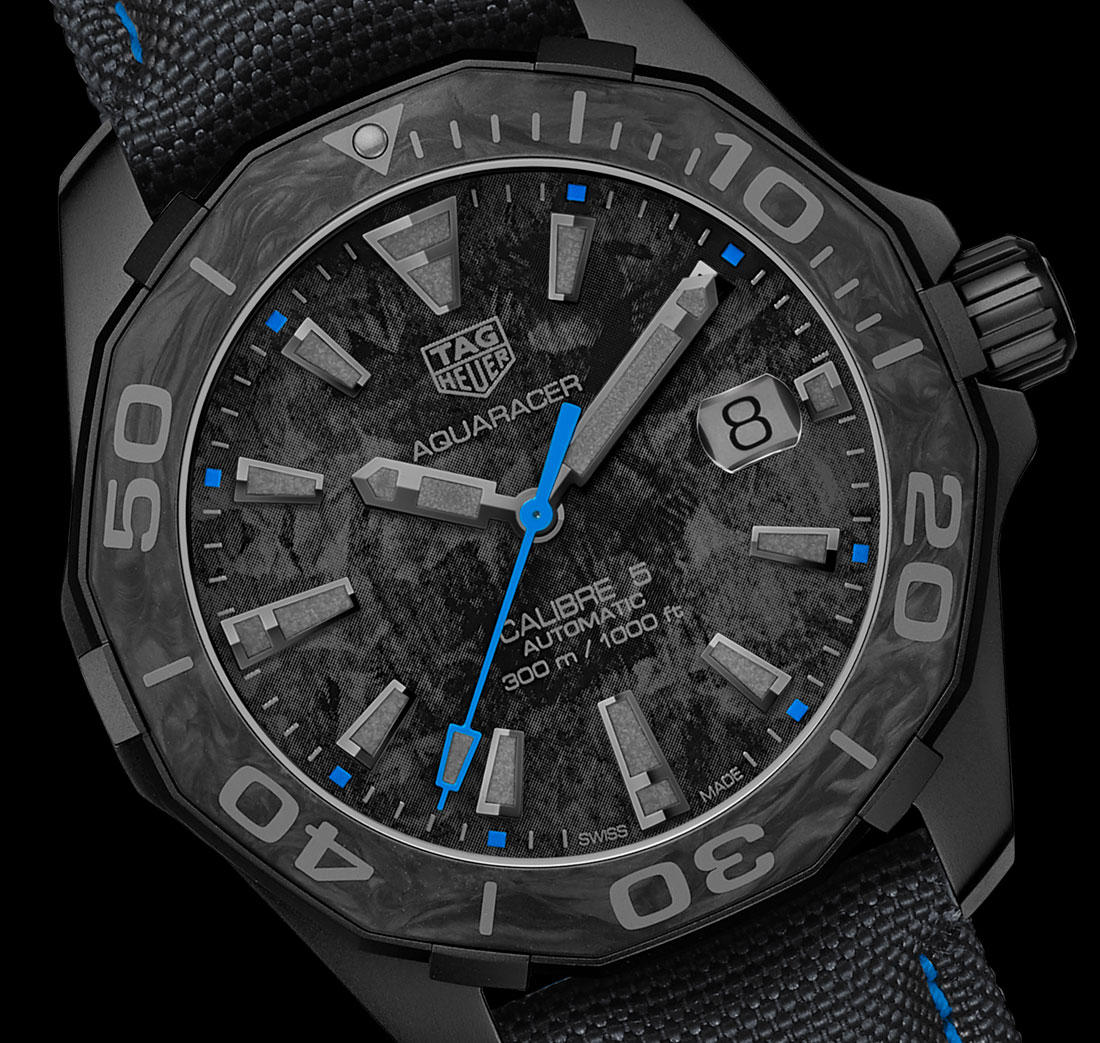 The value of legibility should go without saying, in my opinion. So we don’t need to debate the concept of an all-black watch, apparently pioneered by now TAG Heuer CEO Jean-Claude Biver when he was at Hublot, and which he calls “invisible visibility.” But I deeply sympathize with the Hublot watchmaker Mr. Biver describes when discussing his “concept”:

People don’t buy a watch to read the time. When I told my head watchmaker at Hublot that I wanted a black watch that won’t let you read the time, the 70-year-old watchmaker almost fainted, arguing that he had been “fighting all his life for accuracy and legibility.”

Let that sink in for a moment… 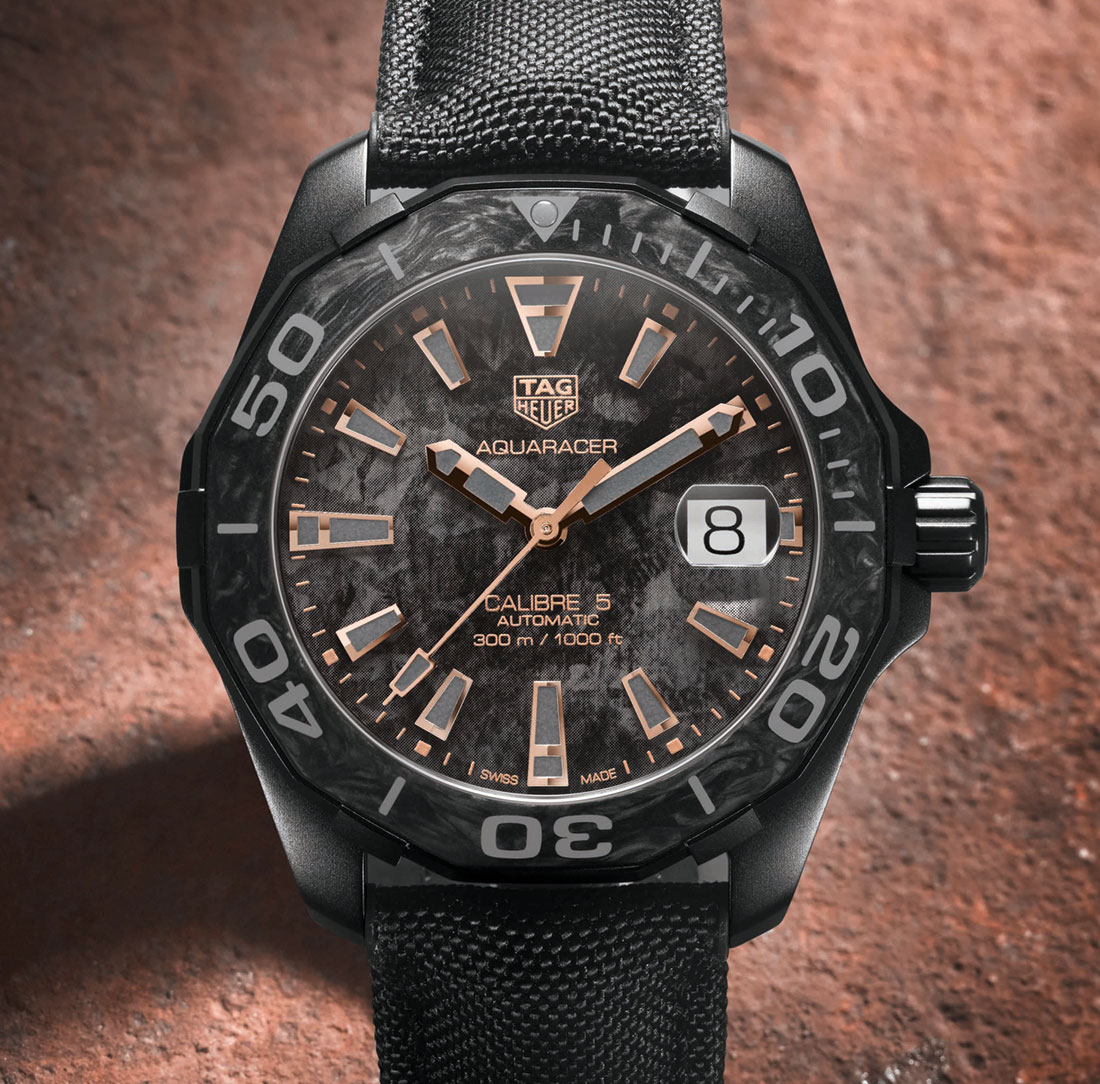 The underlying specs and design of the TAG Heuer Aquaracer Carbon are consistent with the Aquaracer in its redesigned incarnation introduced in 2015. It is powered by the ETA 2824-2 (“Calibre 5”) Swiss automatic movement running at 4Hz with around 38 hours of power reserve, behind a solid caseback (PVD black titanium here). The sapphire crystal still features the controversial “cyclops” magnifier over the date at 3 o’clock, and as a dive watch, it is rated for 300m of water resistance. They come on black textile straps with stitching to match the dial highlights. 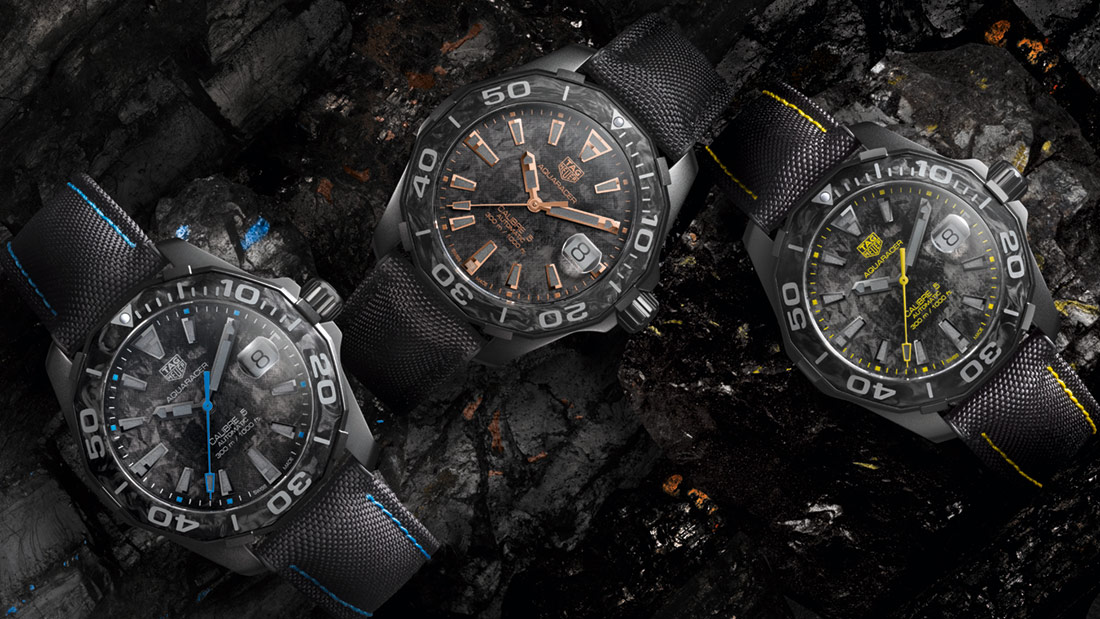 I see the TAG Heuer Aquaracer Carbon watch as part of Jean-Claude Biver’s two-pronged revitalizing blitz as CEO of TAG Heuer. He has tried to please fans of the brand’s history with vintage rereleases on one hand, and at the same time to attract new fans with fashionable, edgy watches that evidently get young people excited. As someone who began my watch-obsessing journey with a beautiful Carrera GMT, I will always have a stubborn affinity for TAG even as they become a brand of celebrity DJ watches, Alec Monopoly smart watches, and large, intentionally illegible skeleton sport watches. The TAG Heuer Aquaracer Carbon will be available exclusively at boutiques and online from the brand, and they are priced only slightly above the black titanium Aquaracers mentioned above at $4,000 USD for the blue and yellow highlighted versions and $4,050 for the gold accents. tagheuer.com