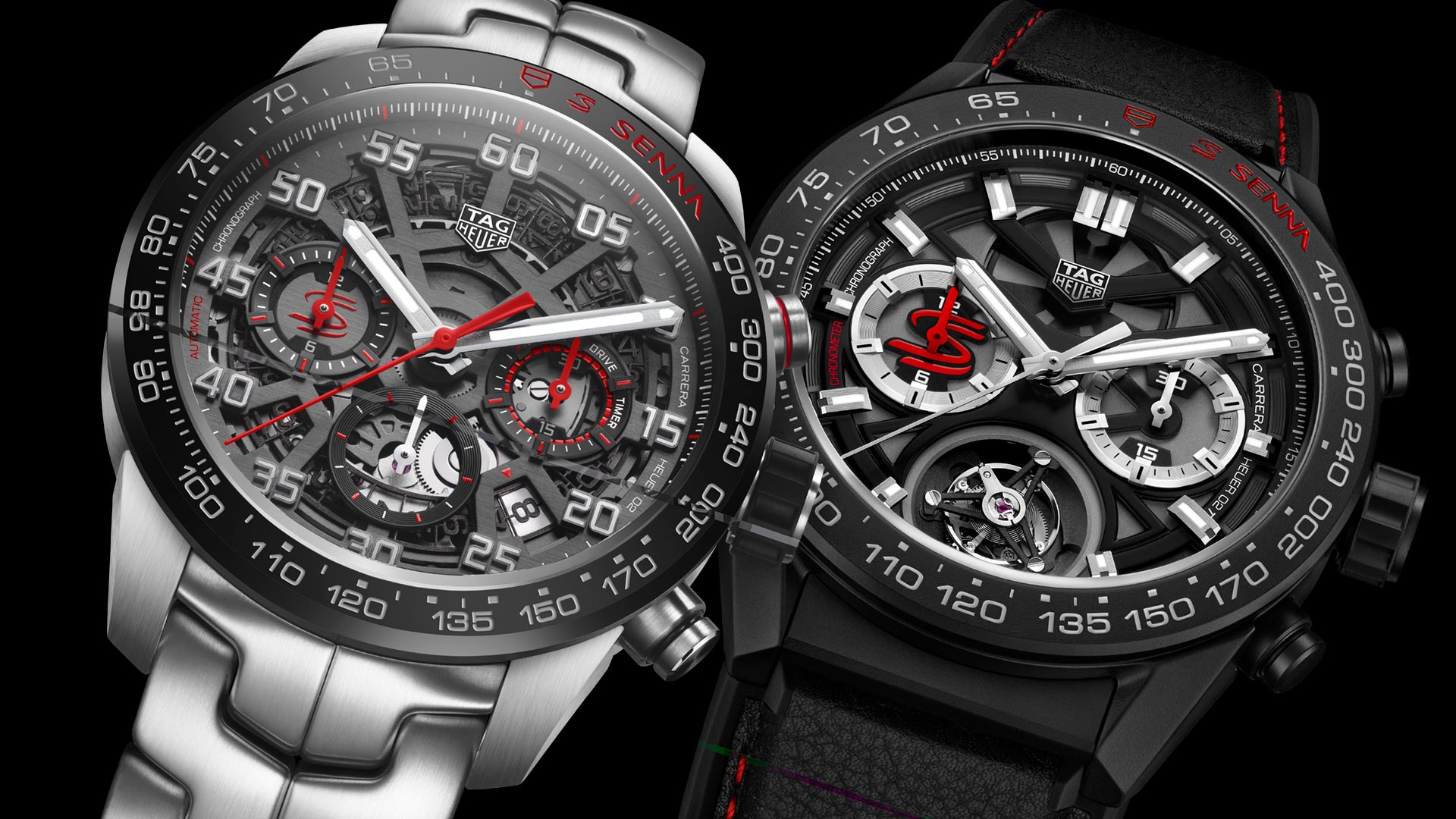 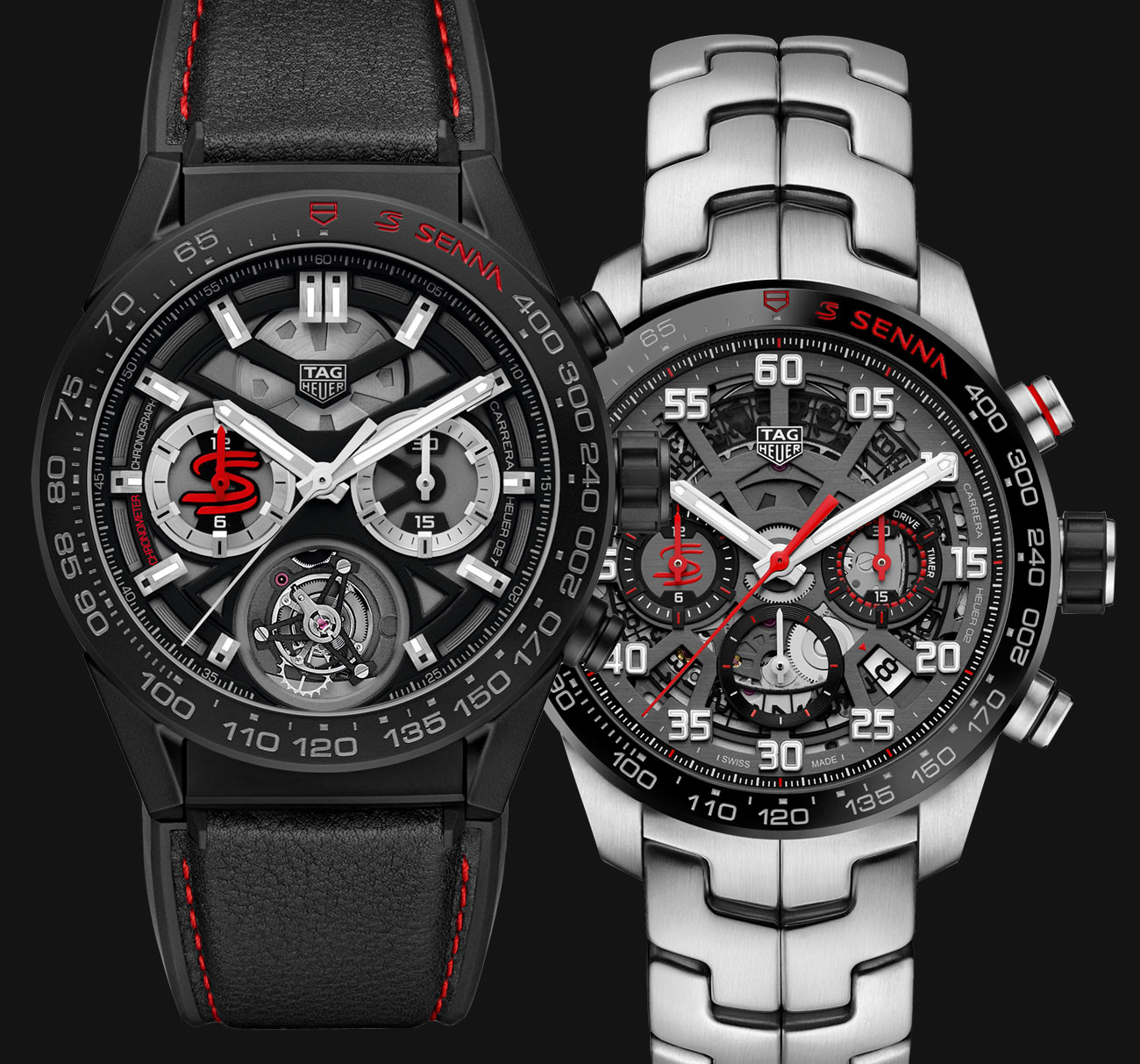 Building on their racing-inspired lineup, TAG Heuer has announced the release of two new special edition Carrera watches, both dedicated to Formula 1 driver Ayrton Senna. The TAG Heuer Carrera Calibre Heuer02 Chronograph Automatic and the Carrera Heuer 02 Tourbillon Chronograph both celebrate the life and career of TAG’s first ever “Don’t Crack Under Pressure” campaign ambassador by dressing up the Carrera 02 in red accents and motorsport style. 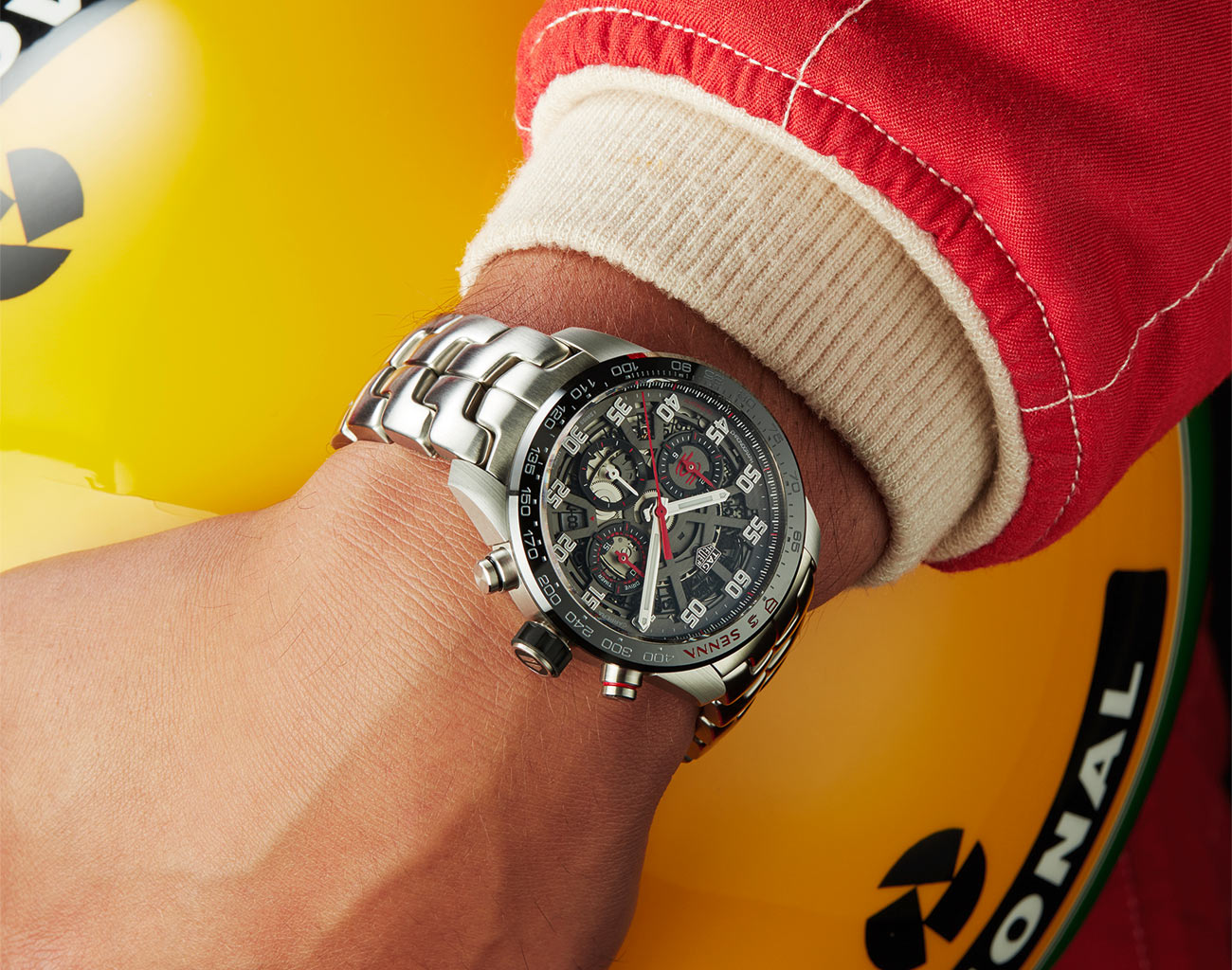 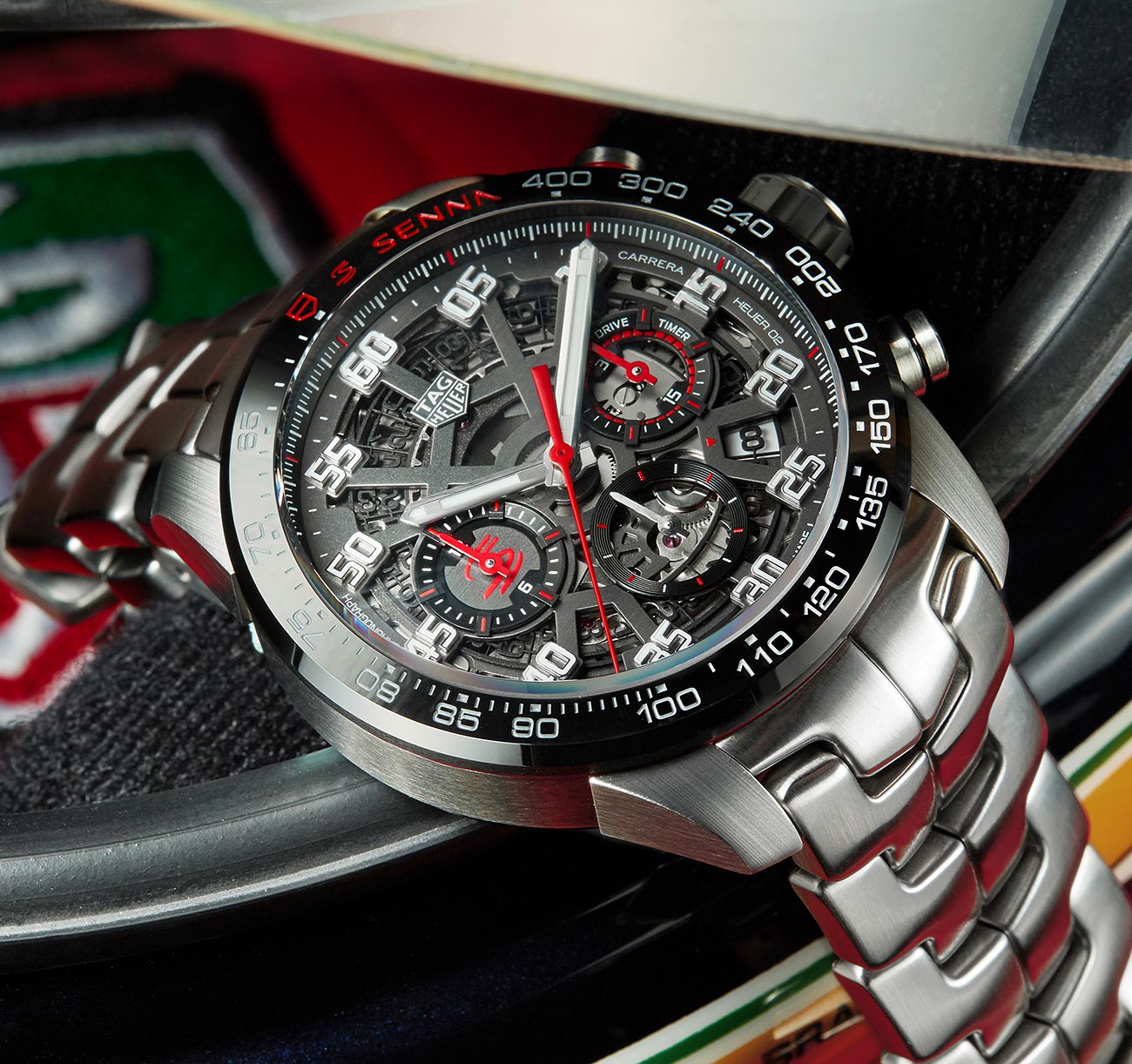 Let’s start by looking at the TAG Heuer Carrera Calibre HEUER02 Chronograph Automatic. This watch features a 43mm steel case with a ceramic tachymeter scale bezel, a domed sapphire crystal, and sports TAG’s S-link bracelet – which fittingly looks almost like a tire tread. It is powered by the Heuer 02 automatic chronograph movement (built off the CH80 movement), with 33 jewels, a power reserve of 75 hours, and a frequency of 28,800bph. 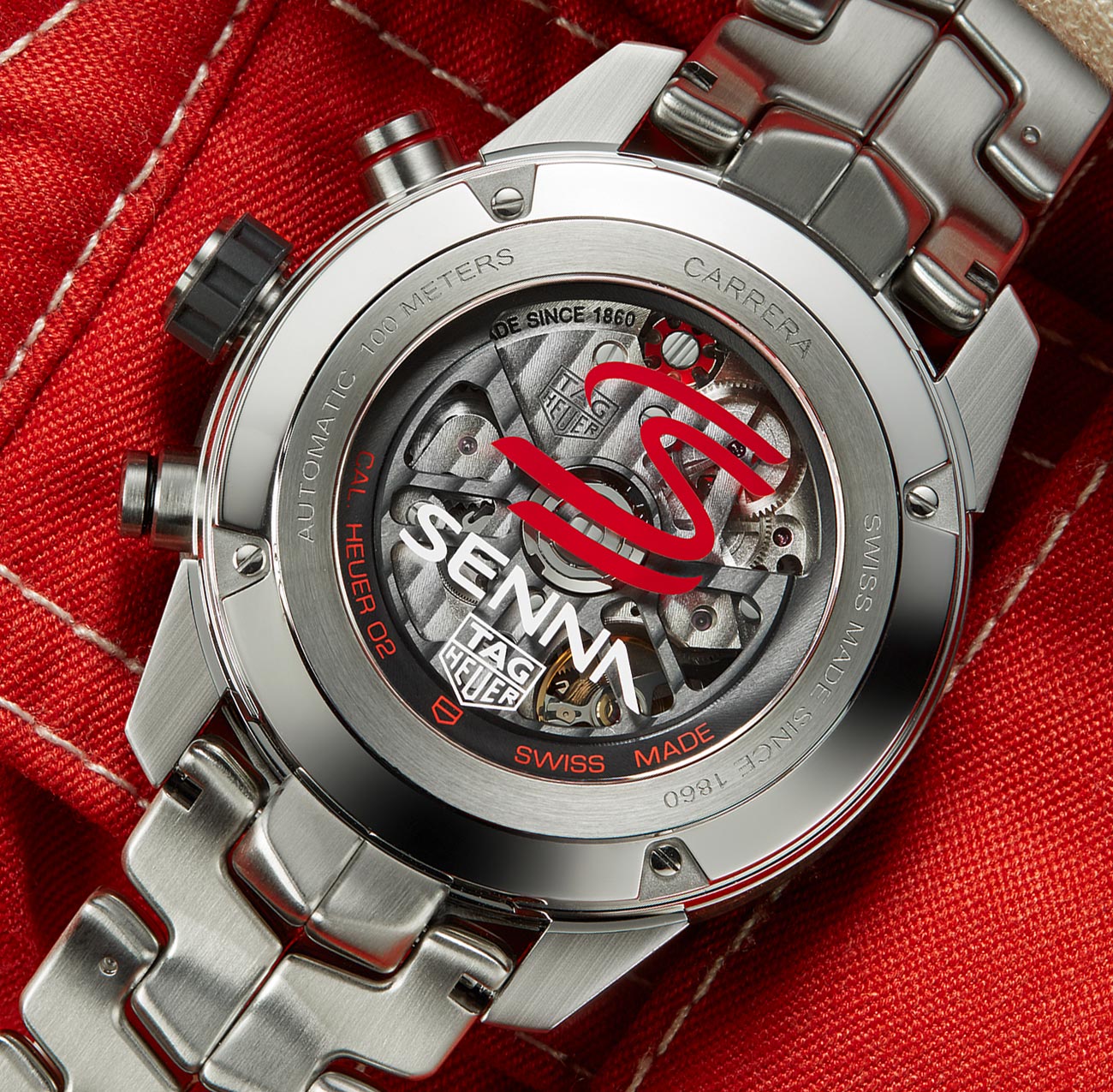 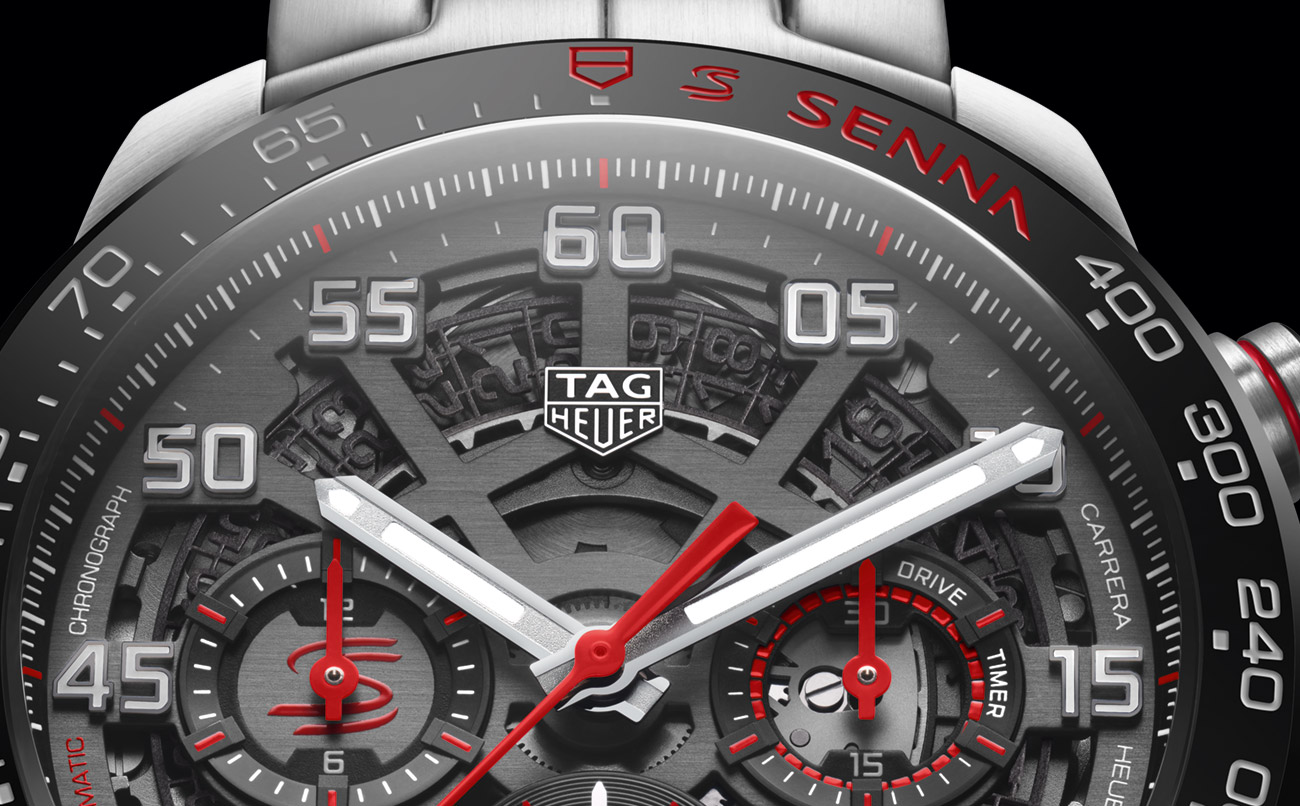 The dial here is skeletonized, with 3 subdials, a minute scale at each hour plot, a date window at 4:30, red accents throughout, and a Senna logo placed in the 9 o’clock subdial. While the skeletonized dial gives you a peek at the movement, you can also see it through the sapphire display back, which of course also features the Senna logo. The overall style here is quite similar to the Carrera Heuer 02 that TAG showed off at Baselworld 2018, with a peppering of Senna racing branding. The S-link bracelet is particularly associated with Senna and a major distinguishing feature of this edition. Note, also, the rounded lugs that further differentiate it from the non-Senna collection. 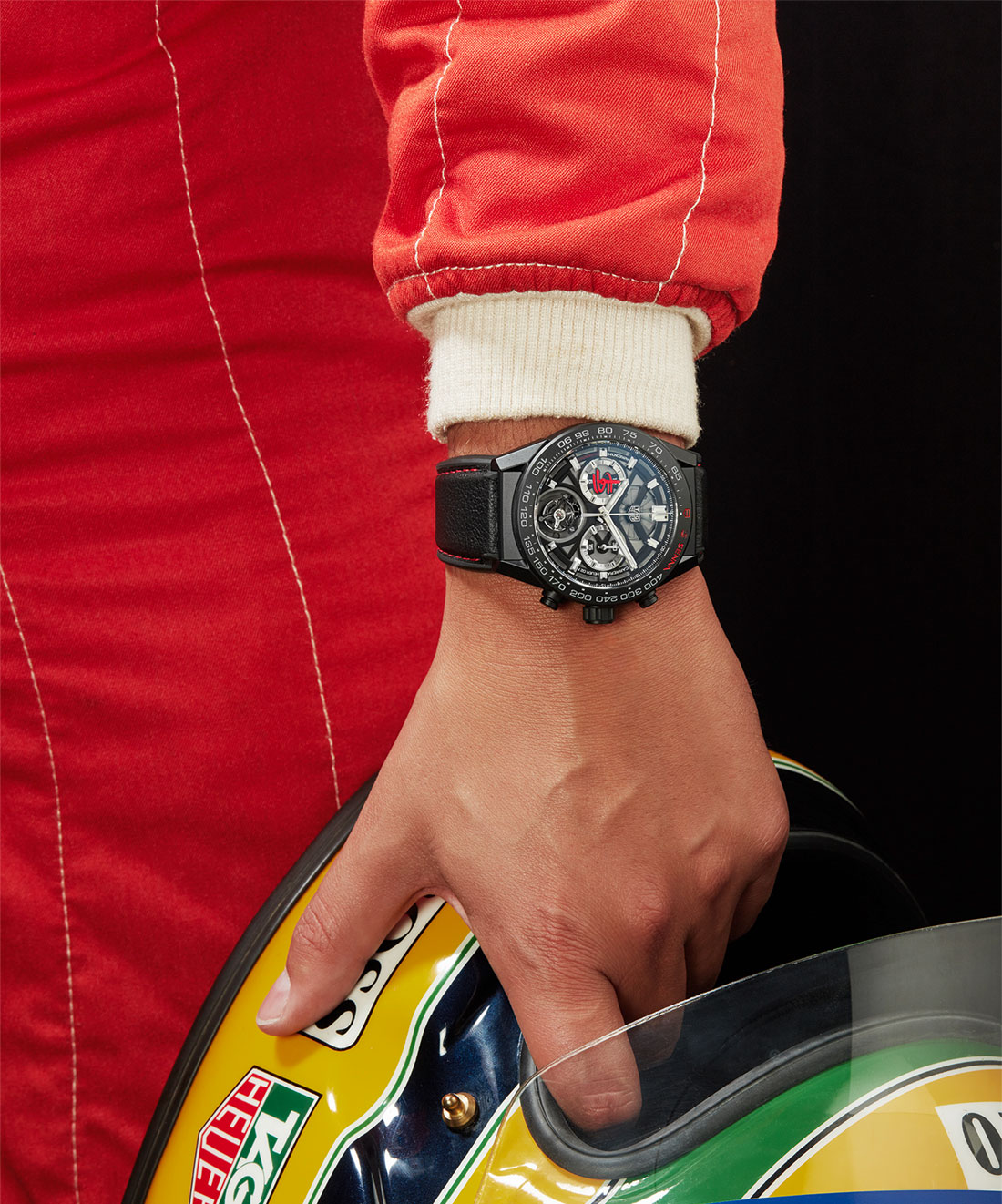 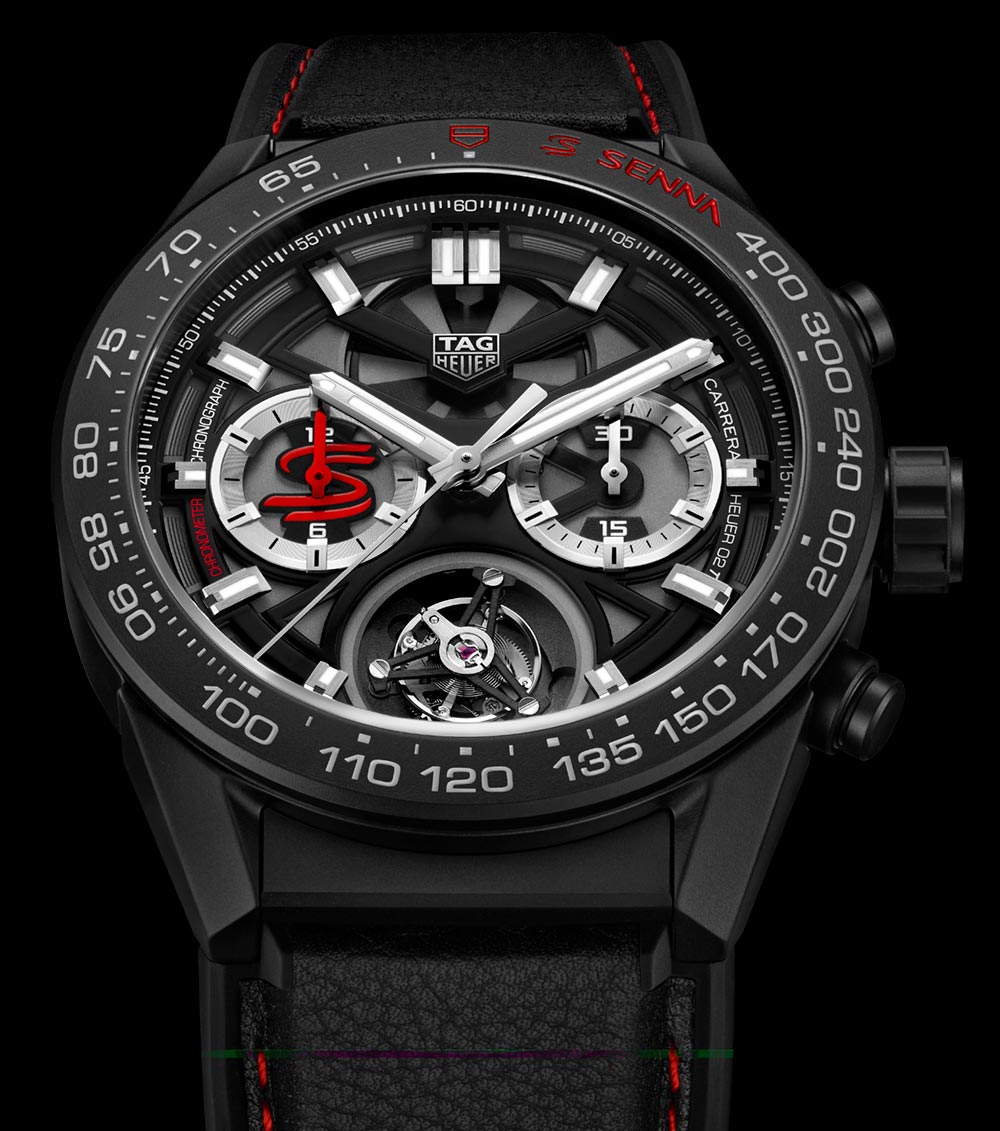 Now, to the Tourbillon. The overall style of the TAG Heuer Carrera Heuer 02 Tourbillon Chronograph Chronometer is quite similar, but with a few key differences. The case of the Tourbillon is 45mm wide and made out of a matte black ceramic, and the pushers and crown have been PVD-coated black to match. This model also does not feature a date, which cleans up the face and eliminates the view of the date wheel via the skeletonized dial. 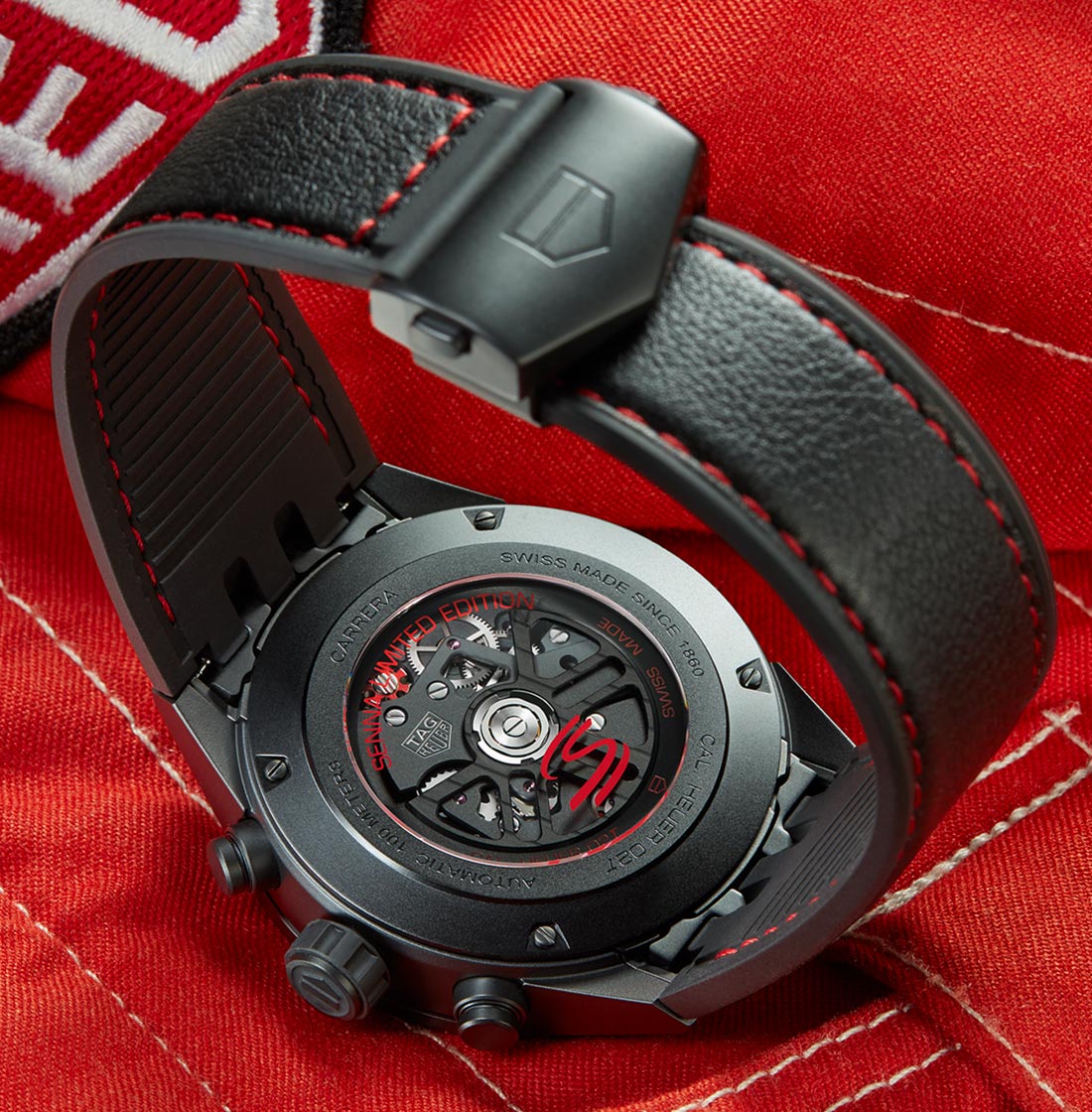 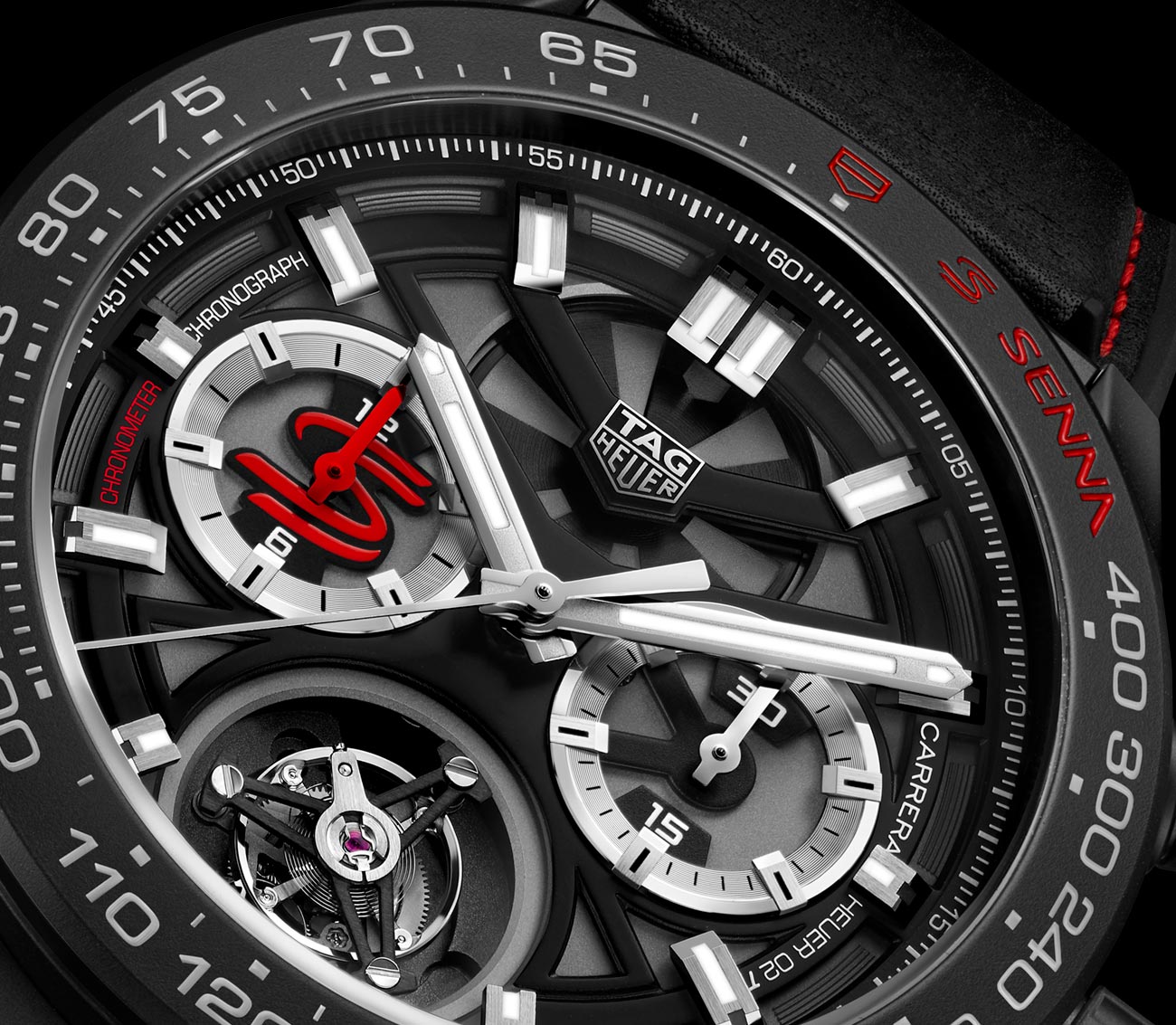 Still, there is plenty of Senna branding here, but the most obvious difference is that rather than a subdial at 6 o’clock, you have the beating tourbillon. This model is powered by the TAG Calibre Heuer 02T COSC movement, a 33-jewel movement with a power reserve of 65 hours, beating at a frequency of 28,800bph. To match the all-black aesthetic of this model, rather than a bracelet, TAG is pairing it with a black rubber/leather strap with a titanium clasp. This tourbillon version is limited to 175 pieces. 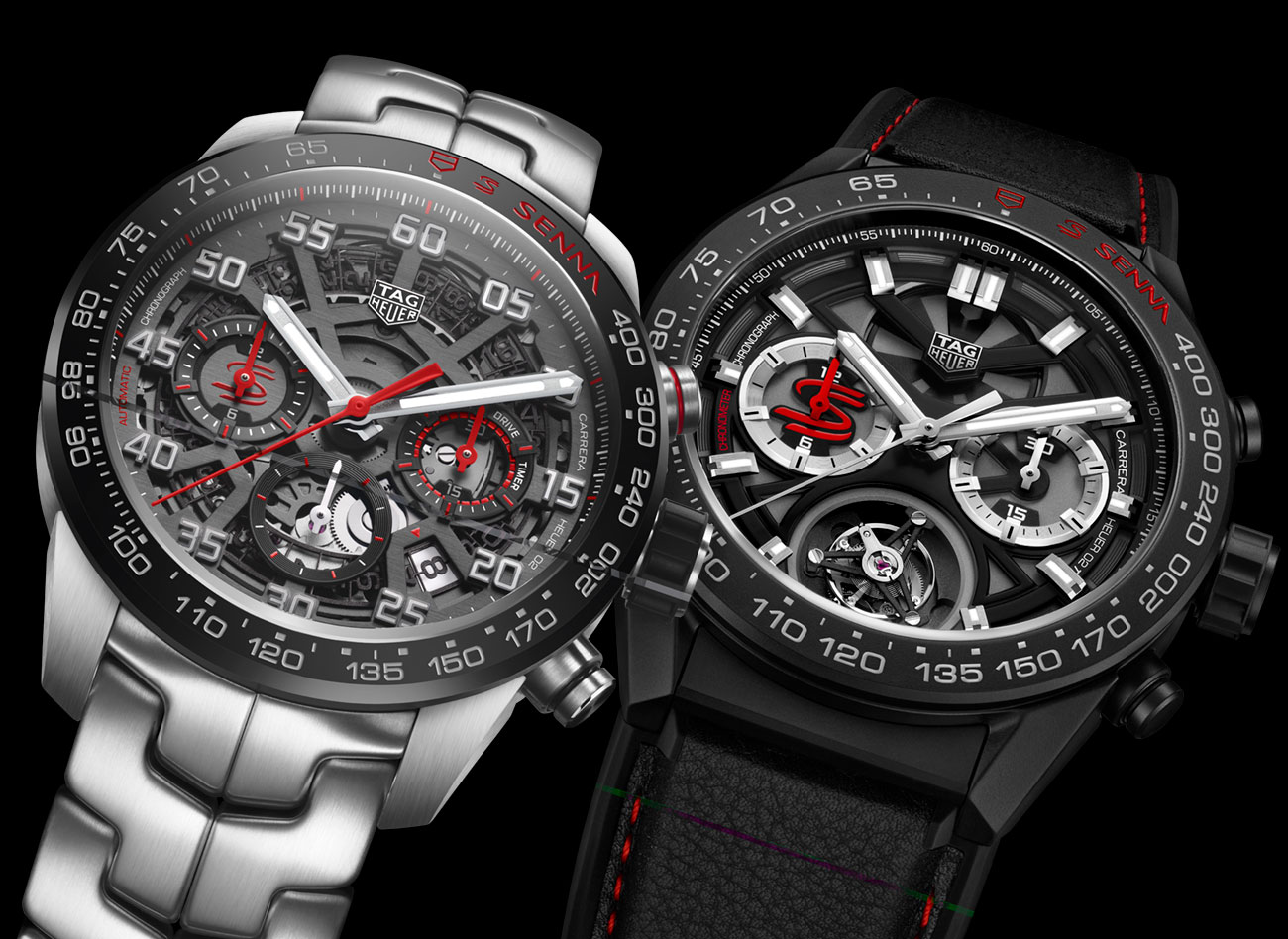 Now, this isn’t the first time TAG has dedicated a Carrera to Ayrton Senna, but it is the first time we’ve seen a tourbillon Carrera dedicated to the driver. The watch designs are no doubt busy, with the skeletonized dials and Senna branding, but as far as special editions go… I actually kinda dig them, especially the automatic on the bracelet. Everything comes together design-wise for an overall sporty, racing look (it’s also much more in line with my budget than the tourbillon). However, while I’m personally not a huge Formula 1 fan, I have attended one race at the Circuit of the Americas, and I’ve seen firsthand how dedicated Formula 1 fans are to their teams – and I could easily see some wealthy Senna fans shelling out for the Senna Tourbillon that honors their favorite driver. Fans of these pieces can pick up the Automatic Chronograph for a price of $6,350, and the Tourbillon for $21,200. Learn more at tagheuer.com