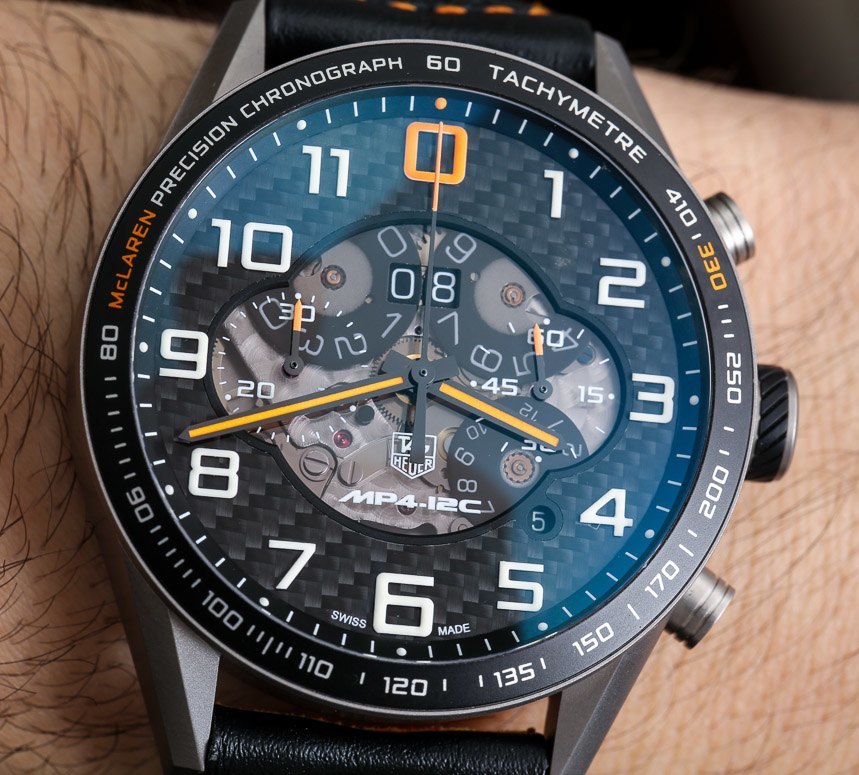 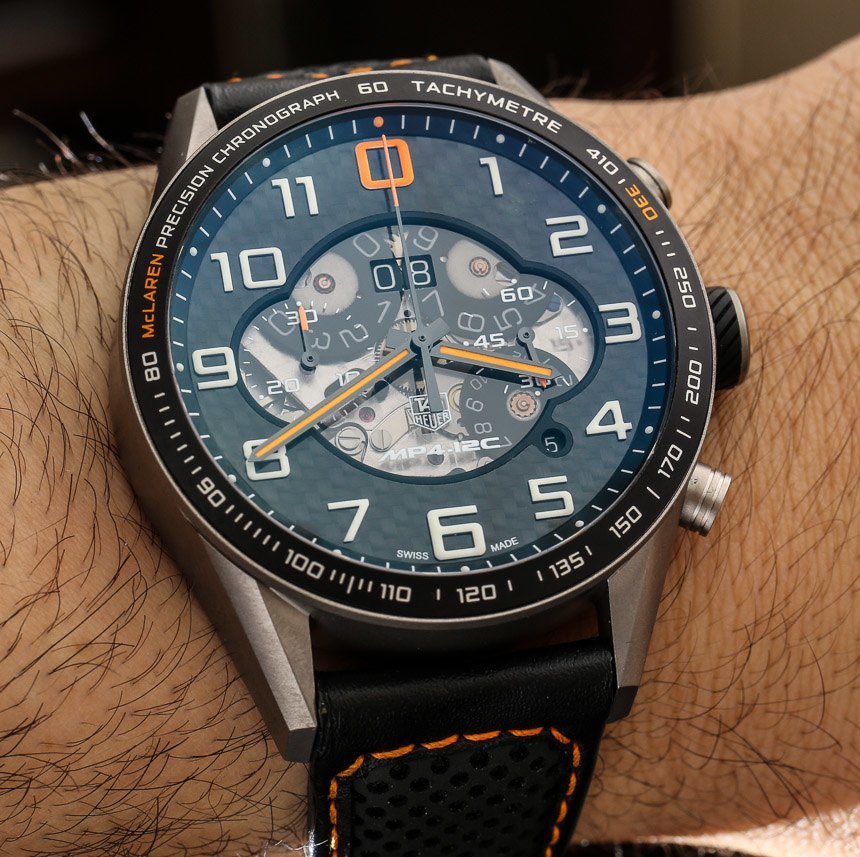 In 2011, TAG Heuer initially released this Carrera MP4-12C Chronograph watch in honor of their limited relationship with the supercar maker McLaren – namely, for the MP4-12C car. We were actually the first to debut the watch, and I recall at the time being very impressed with a watch that clearly took equal inspiration from the iconic design of the TAG Heuer Carrera and the modern materials and design elements of the automotive world. OK, so that was in 2011, but once again, in 2014, TAG Heuer had the Carrera MP4-12C Chronograph McLaren watch at the Baselworld trade show for us to look at. What is odd about that is that most of the time, watch brands only show new watches at the trade show events.

During our meeting with TAG Heuer at Baselworld 2014, I actually thought that this was a new Carrera McLaren model, but I realized only later that it was the same type of watch as the one I saw more than three years earlier. This was curious not only because it was shown in 2014, but also because it was (and still presumably is) a limited edition model of 1000 pieces. So what is the deal? 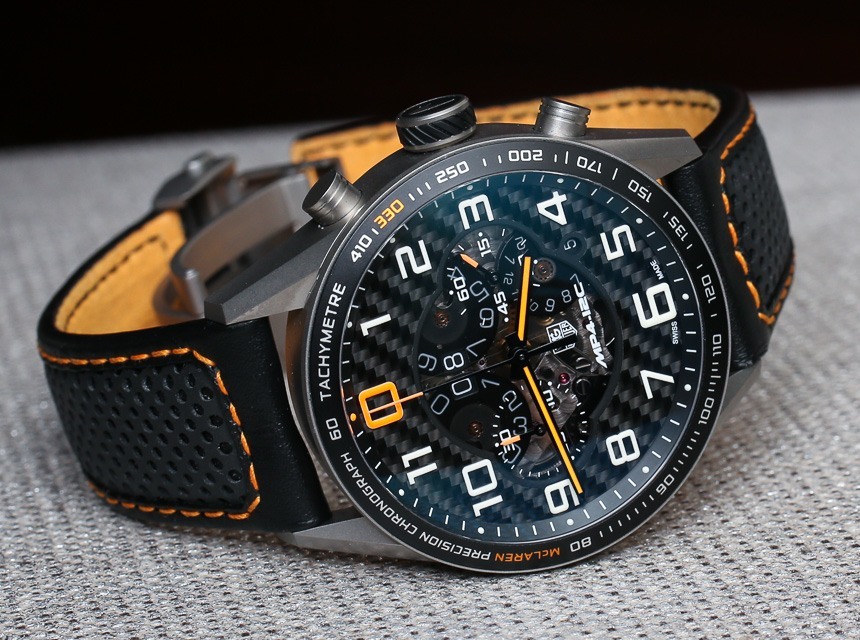 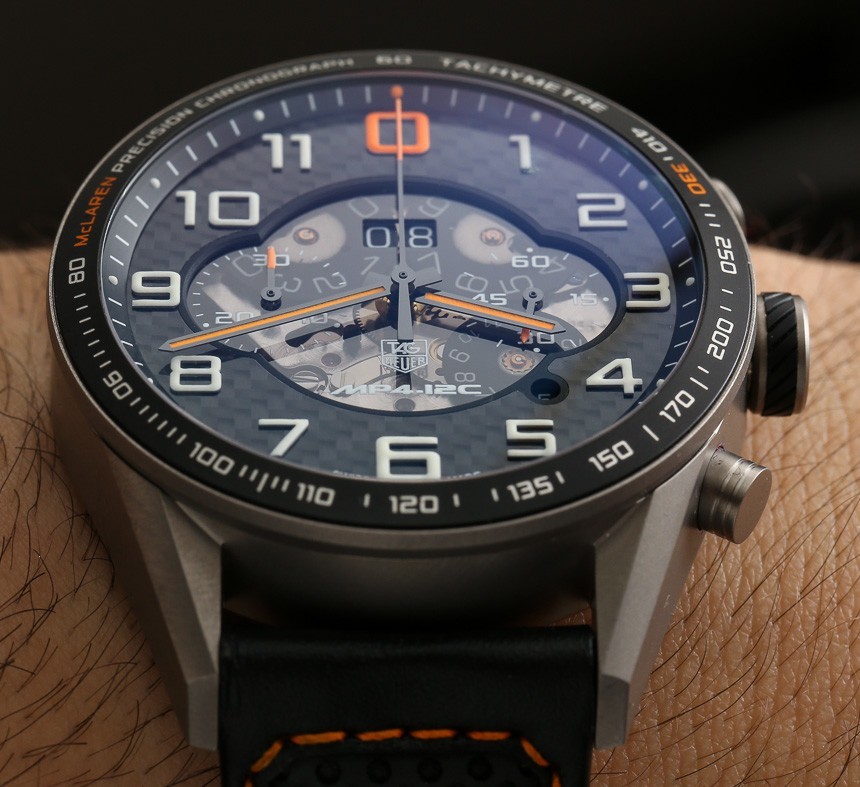 I actually don’t know the whole story about why the McLaren watch is “back,” even though I posed the question to TAG Heuer. My understanding is that for some reason the TAG Heuer Carrera MP4-12C Chronograph watch was never fully released, or released in a very limited way. It was certainly not released to TAG Heuer’s normal retail partners. More so, my understanding is that TAG Heuer worked with various McLaren car dealerships around the world to sell the watch. This seems like a smart idea, and something that isn’t as common as you might think when it comes to the frequent car/watch relationships we like to write about.

Speaking of which, why doesn’t the relationship ever go the other way? Was it is always a car-inspired watch and never a watch inspired car? I actually think the latter would be quite cool. Anyhow, I don’t know why TAG Heuer never managed to fully ship the TAG Heuer Carrera MP4-12C watches to the McLaren dealers but it did send at least a few. What stopped TAG Heuer from fully shipping the 1000 pieces is unclear. Further evidence to support a lack of these watches out in the wild is no pre-owned or new pieces available online for purchase. That usually signifies not only a lack of inventory, but also that TAG Heuer never even intended to ship to watch retailers. 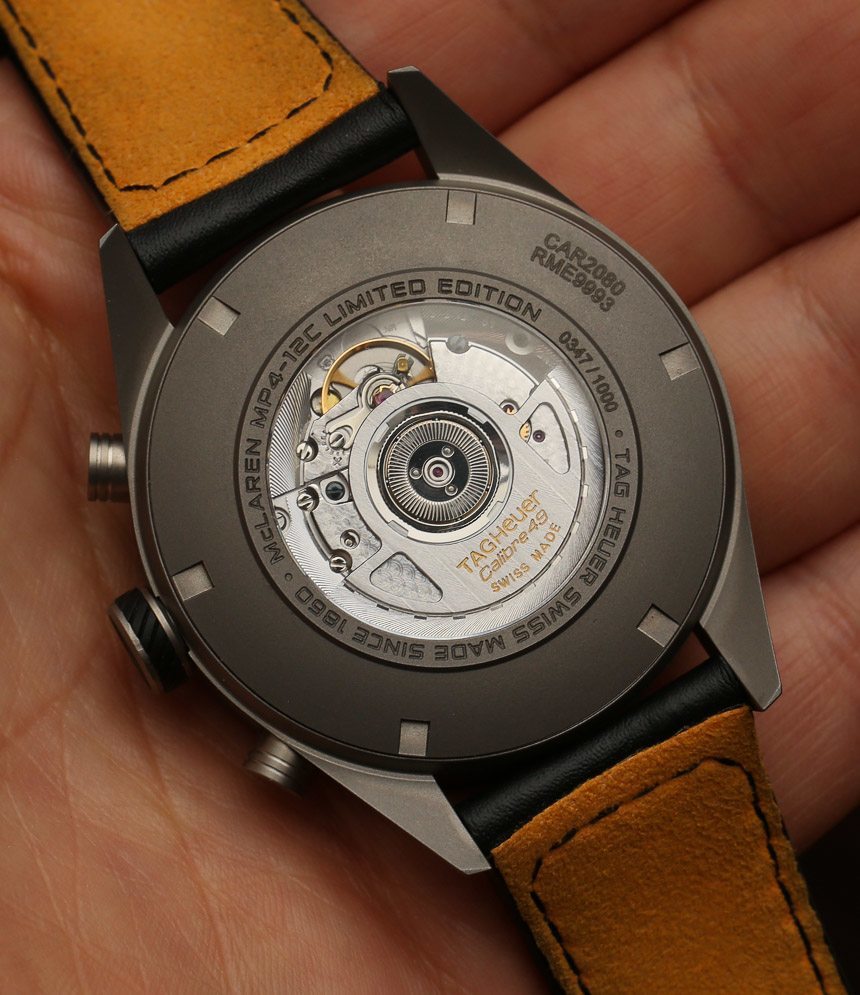 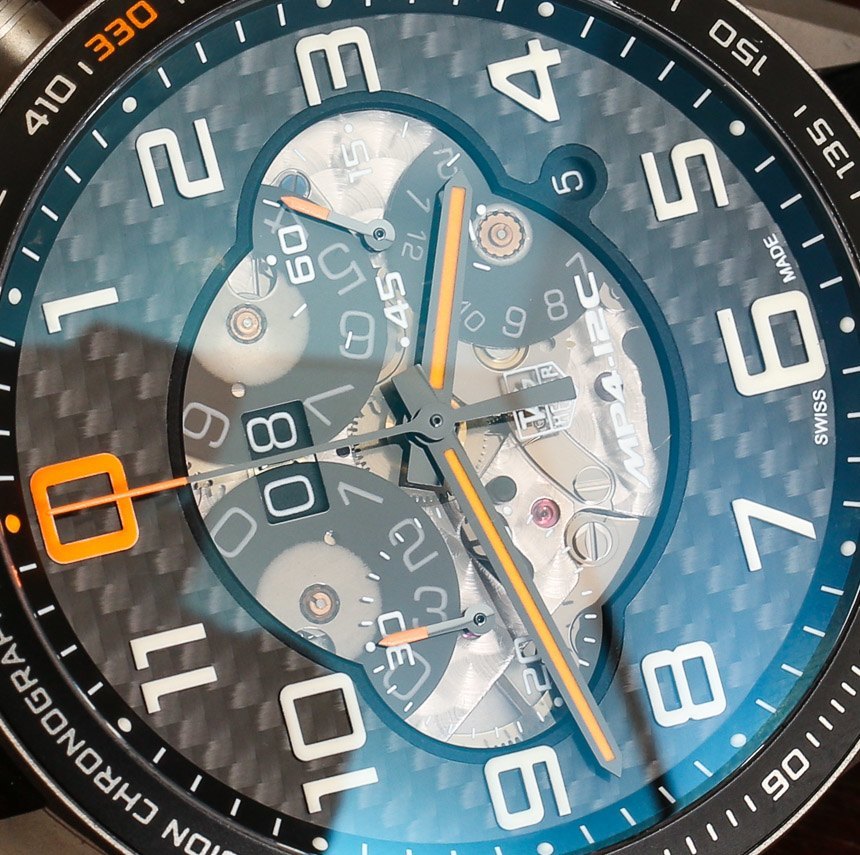 Apparently, in late 2013, TAG Heuer mentioned the TAG Heuer Carrera MP4-12C Chronograph McLaren watch on their Facebook as a testament to their long relationship with McLaren (because apparently in the past McLaren used Heuer stopwatches). As of now, I don’t think the watches have shipped. What is a bit funny is that McLaren has actually officially stopped producing the MP4-12C car – whose name is part of the watch and on the actual dial. McLaren replaced the MP4-12C car in 2014 with the new McLaren 650S.  At least the cars look a bit similar.

I don’t know how that is going to effect sales of the Carrera MP4-12C watch, but I have a feeling McLaren dealers aren’t going to be thrilled about stocking a timepiece for a car that they either no longer have, or are selling off with any available final inventory. So the story is a bit funny, but the watch is still cool, even though it was initially debuted a few years ago. At the very least the TAG Heuer Carrera MP4-12C is not only handsome, but also very unusual from a collector’s standpoint, when it comes to Carrera watches. 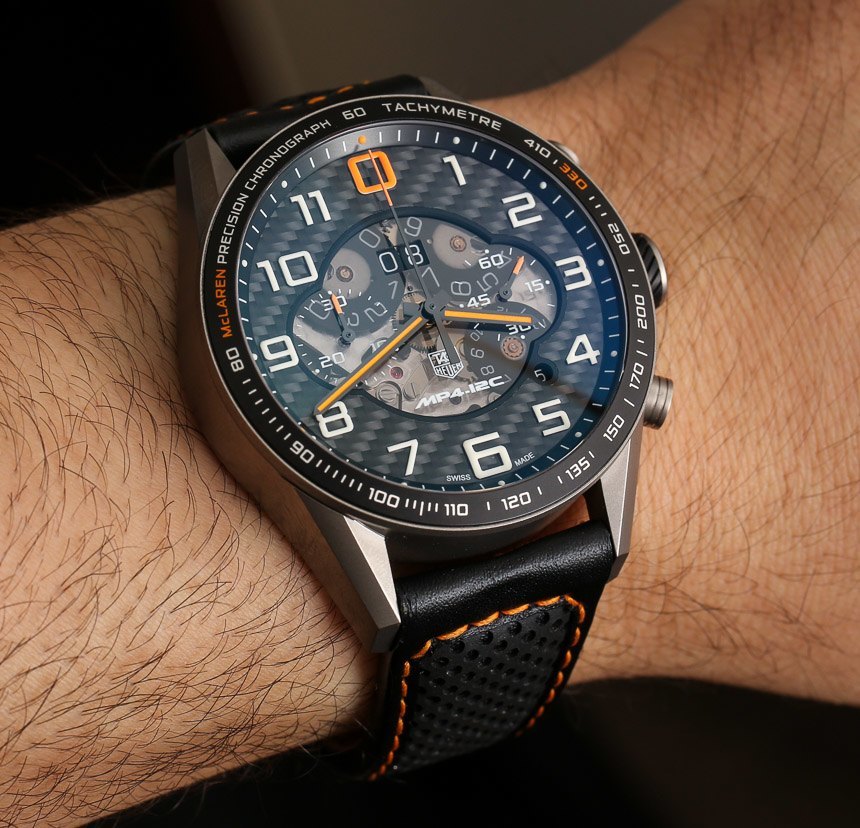 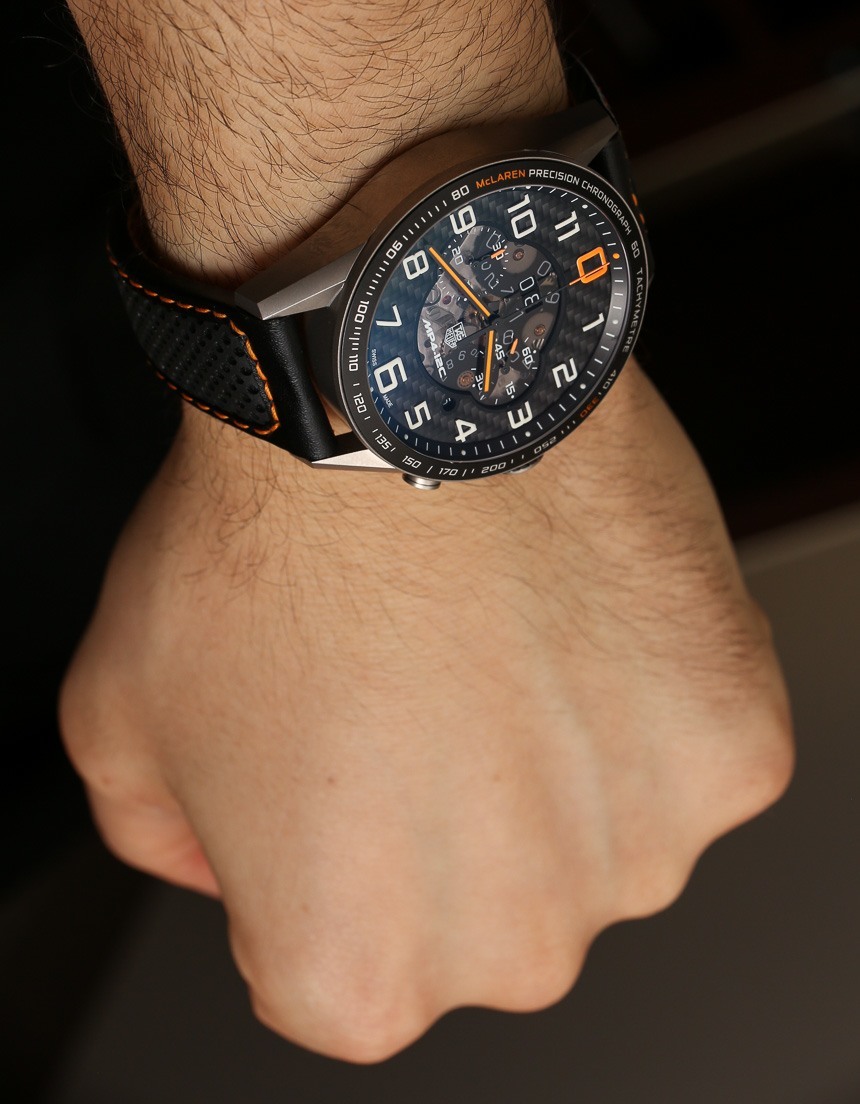 The most “Carrera” part of the watch is the 43mm wide Carrera-style case. However, it is produced in grade 2 titanium, and not steel, like most other Carrera watches. It also has a slightly different looking aluminum bezel insert for the tachymeter scale. The case is sandblasted, which is how grade 2 titanium looks its best, and it is water resistant to 100 meters. The TAG Heuer Carrera MP4-12C also happens to look really nice in pictures.

When it comes to the dial, you can see where TAG Heuer took a total departure from most Carrera watches outside of a familiar font. Pretty much everything else is different, as well as the movement and materials used. The dial is mostly made from a piece of carbon fiber and sapphire crystal – much of which is smoked. 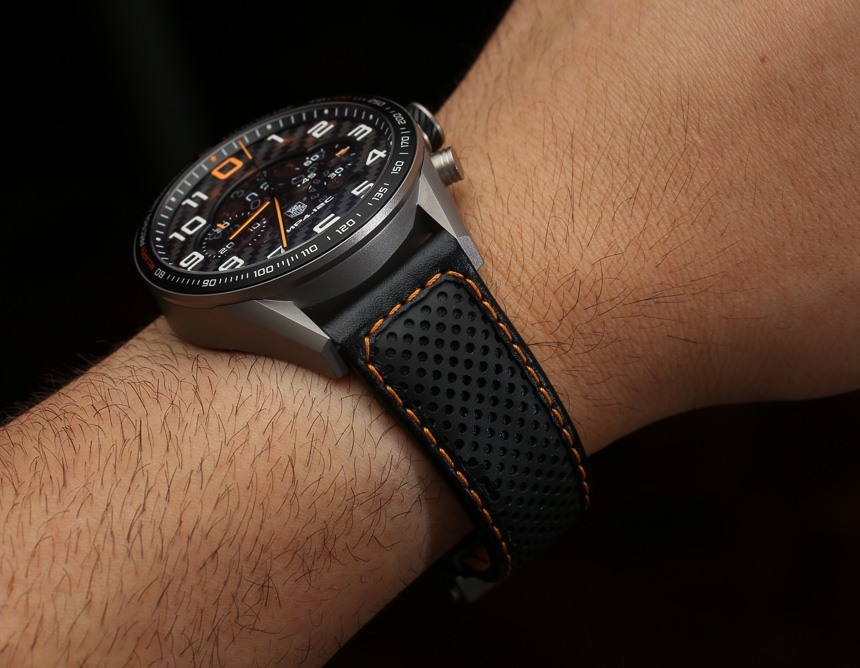